the other day the wind was blowing so hard and it later snowed. we had no where to go but into an enclosed place so we decided to go to COEX Mall. getting to Samsung Station is pretty far from the Sinchon (Hongdae, Edae) area but is close to places like Gangnam. 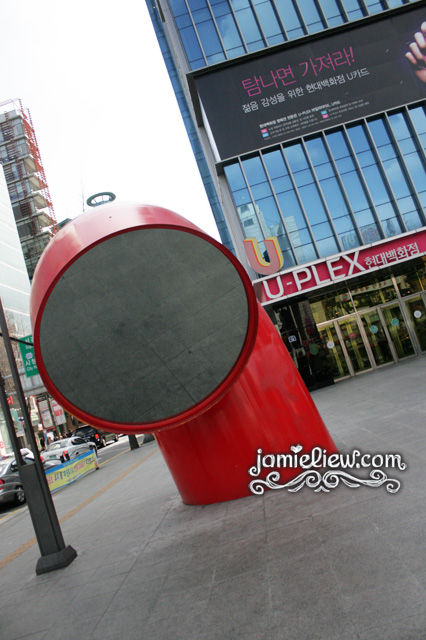 this is not COEX hahah. it’s actually the huge installation art outside U-Plex. 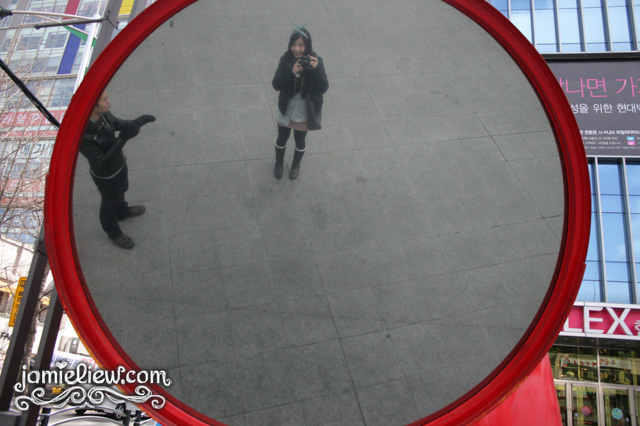 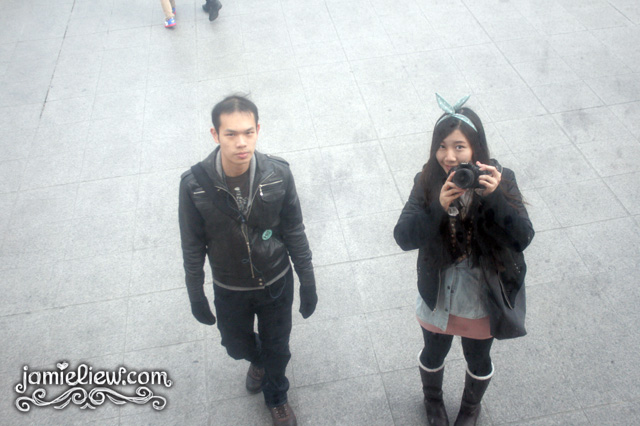 I think that’s the purpose of the mirror. really. 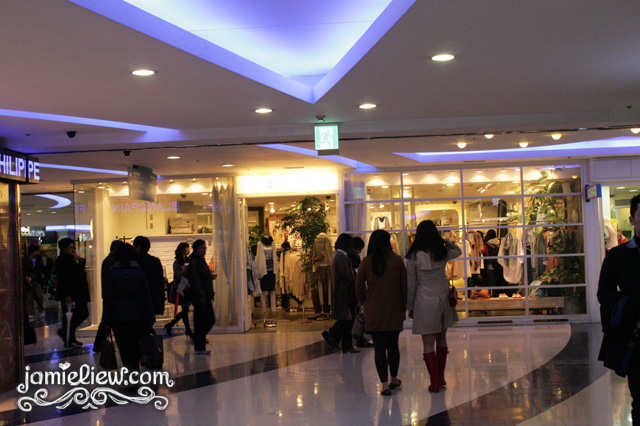 and we arrived at COEX. if you are going to COEX for the first time, do not doubt where you are going. just follow the signs and you won’t be wrong =D.

the clothes here are nicely displayed, usually very expensive but it is not like you can’t find anything reasonably priced but you might see similar stuff in Edae too =D. 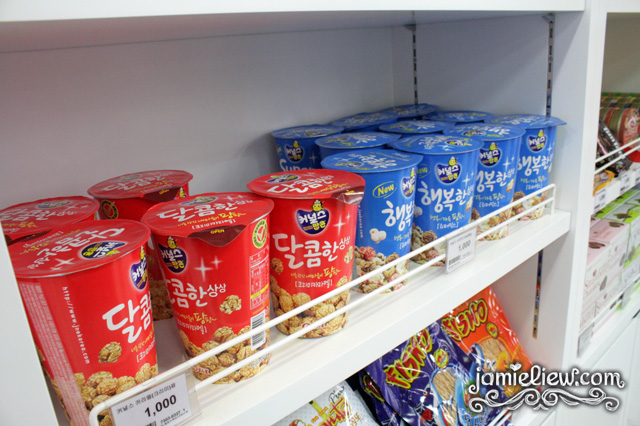 popcorns in paper cups! not that worth it actually imagine how little popcorn can such a small cup put =S. 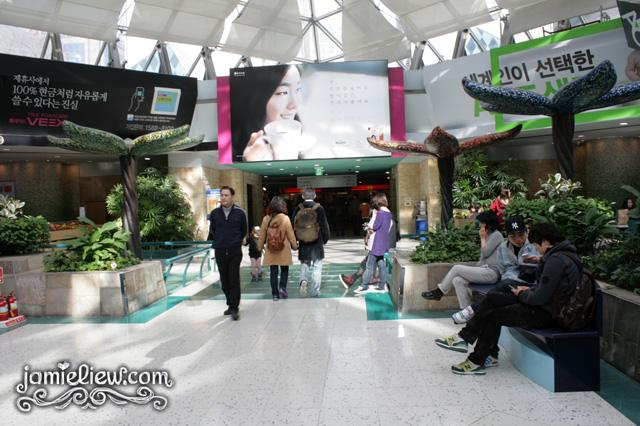 this is le famous COEX mall foodcourt which links it to another mall. 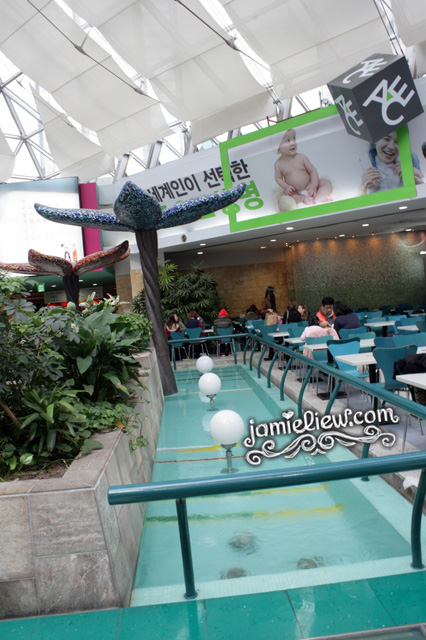 well I guess it’s famous because it has water displays around =D. 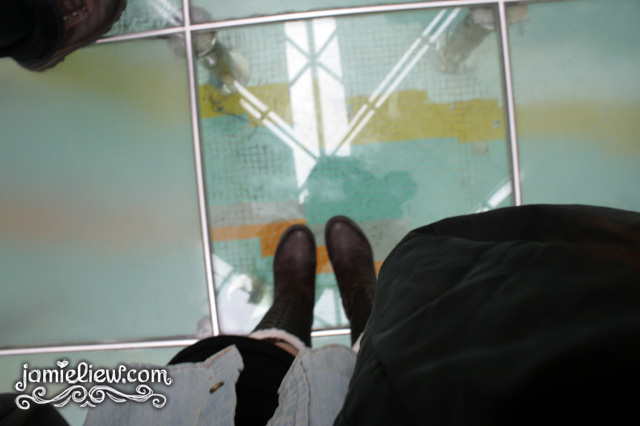 there is actually some cupid looking statue with a pot on it’s hand and people will try throwing coins into it haha. 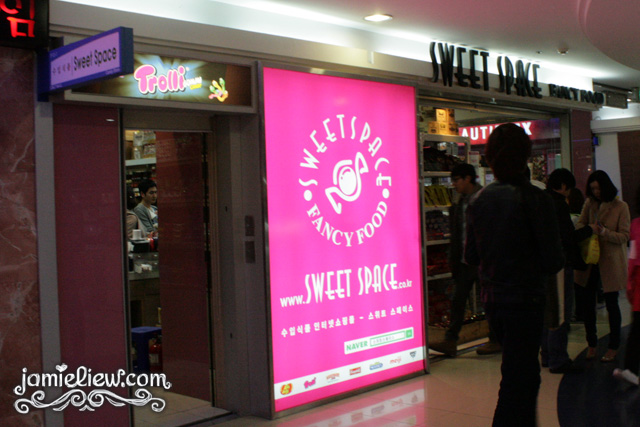 this Sweet Space is absolutely awesome. I found familiar sweets that are also sold in Malaysia to only know that they are all actually made in Indonesia. hahaha. but still! 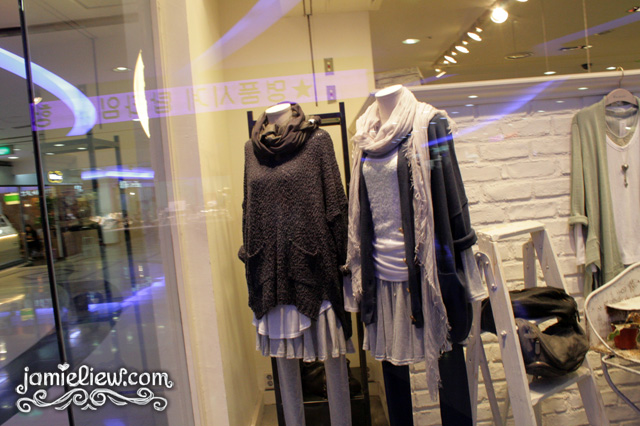 Korean Fashion for you? they kind of like drapy clothes rather than the tight body hugging ones actually. 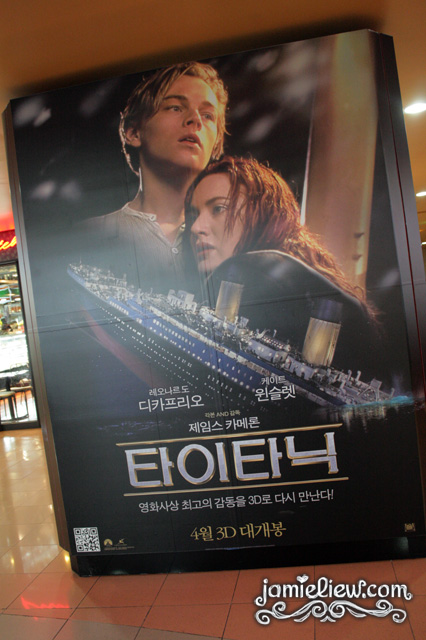 absolutely weird to see Titanic with no english words on the poster. 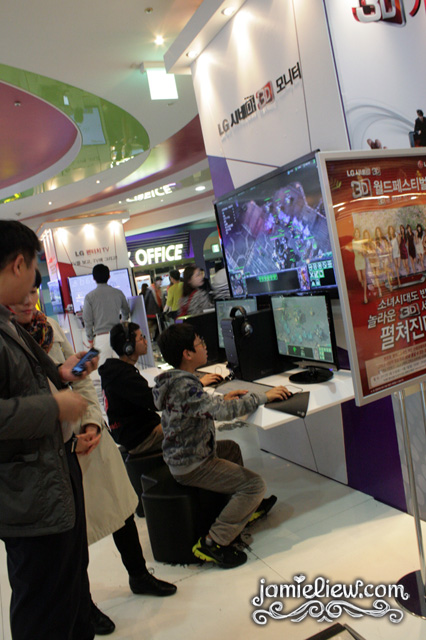 hello kids. starcraft in 3D anyone? and yesssss, you can play star craft IN THE PUBLIC! 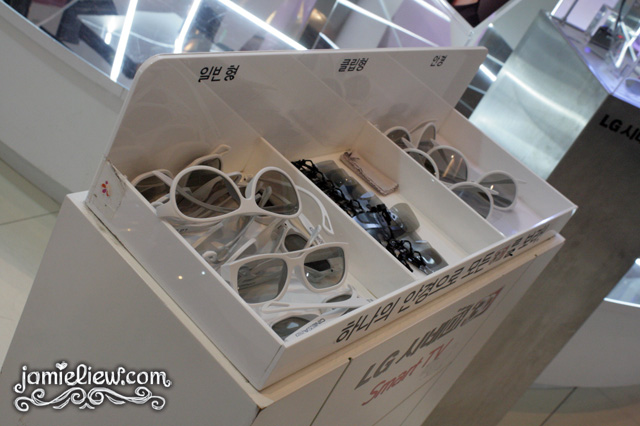 there are 4 of these glasses booth. 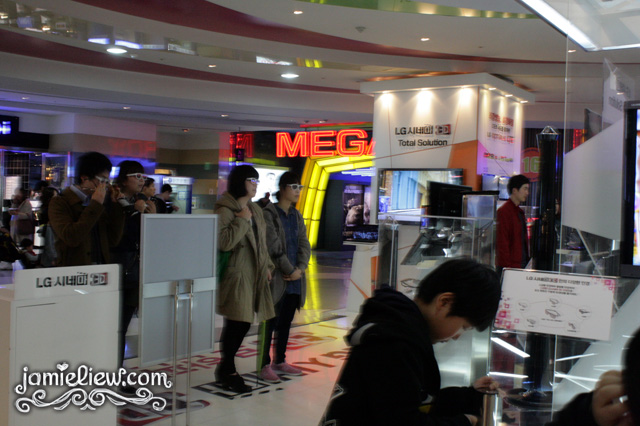 for everyone to see how amazing 3D TV’s are.

I am so amazed. because I hated 3D. those glasses are not only heavy, they gave me a headache too! I hateeeeeee watching 3D movies in the cinema. but, to my surprise the Korean glasses are made so light you won’t feel its weight at all and their 3D is so perfect, you feel like standing there for a very long time just to admire the awesome technology of 3D.

in my opinion, this is a MUST DO activity when you’re at COEX hahaha seriously, I’ve never been so fascinated by 3D. it’s not only 3D actually.. it’s kind of like HD + 3D. awesome shizzzz. 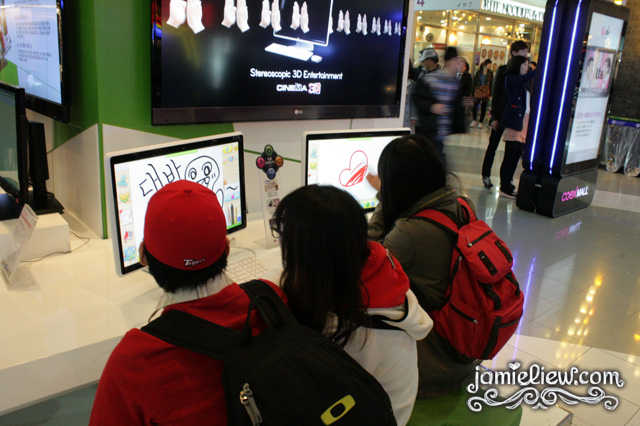 now you won’t need to buy your kids colour pencils or crayons because all they need is a touch screen monitor to draw whatever they want and then save it. 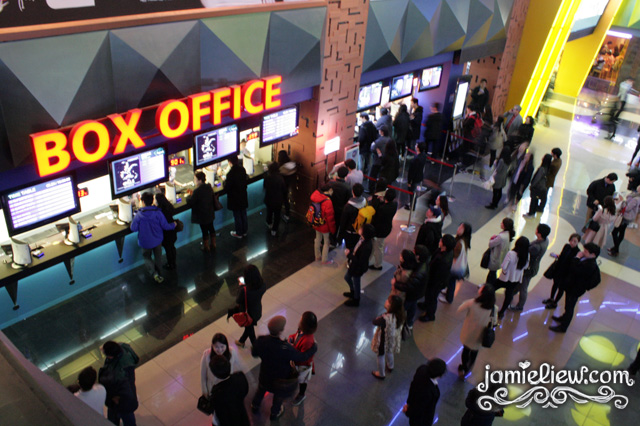 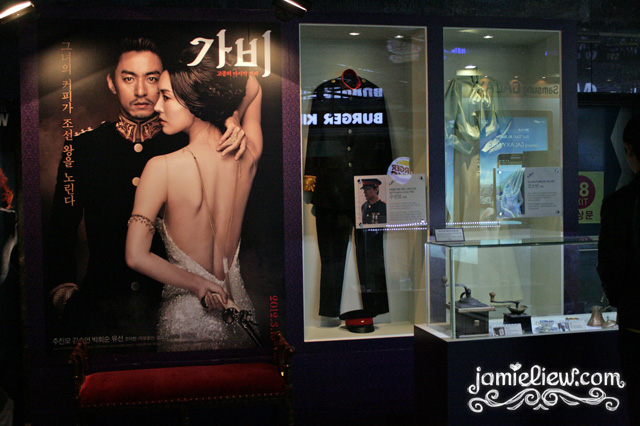 took the picture because I thought that this poster is really sexy D=. that dress is so awesome. though all my friends should know I am a little too shy to wear anything like that. 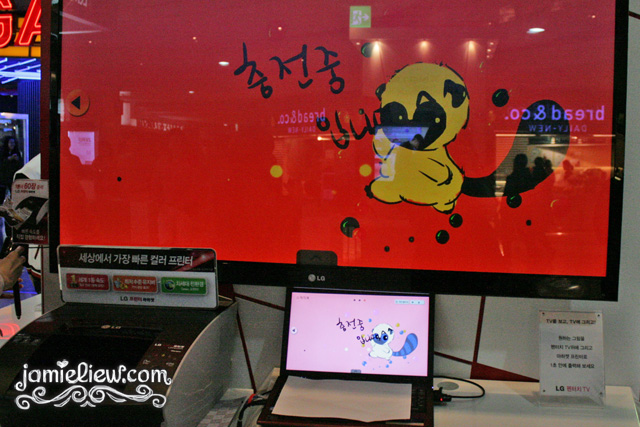 actually this drawing is super cute. buttttttttt. =S. sigh I snapped too fast and thought it was okay haha. there was a professional cartoonist drawing earlier so I guess maybe this is one of her art as well D=. 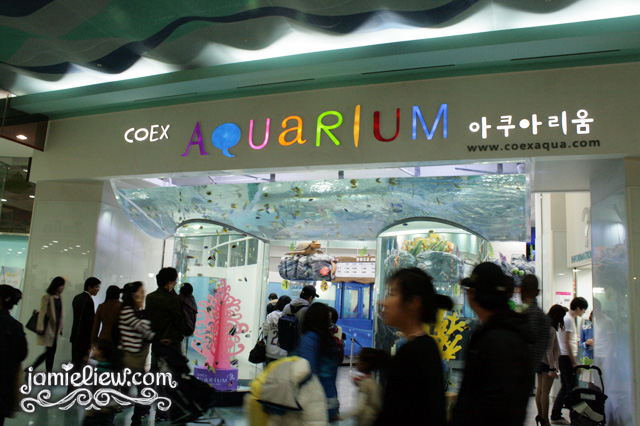 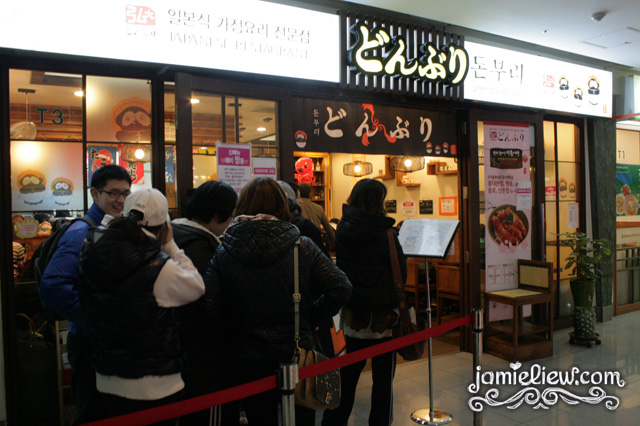 돈부리 or Donburi is a famous dish in Korea. and this particular Donburi shop ALWAYS have a queue. apparently it’s super delicious and all. will give it a try one day! 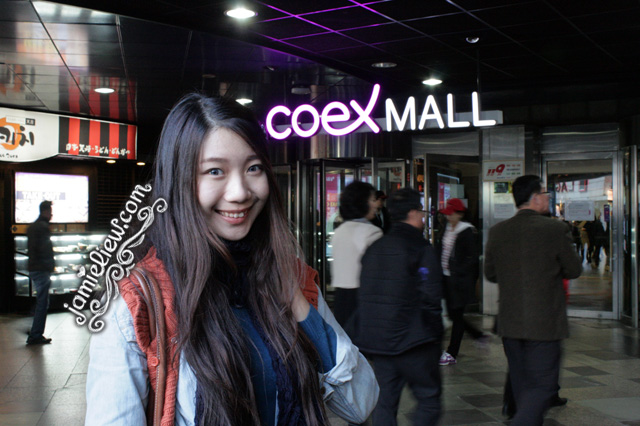 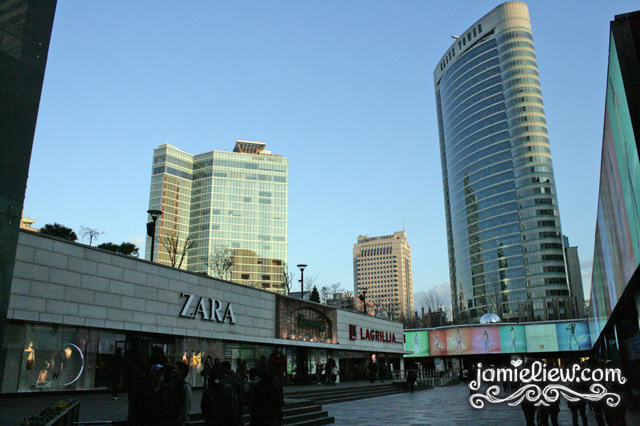 and the outside of COEX. also, if you do not know yet, COEX is the largest UNDERGROUND shopping mall in whole of Asia. so yeah, come here for the sake of its record. haha. there is also a Kimchi Museum if you’re interested ^^.

Hi, may i know which places are popular among secondary school students/ tertiary students hang out on a daily basis?

i came across your blog while googling on places to shop/visit/eat in Seoul – thanks 🙂 very informative – will use your tips in my up coming trip in May!!

I love this post!!!! I can’t wait to visit the place too…

i went to this place too! its really awesome! 😀 i love your post alot!

Jamie, thanks alot for ur information, i am planning to SK this Sept 13. your web is very helpfull, detail and more beautiful with your photos.
Jamie, can Tmoney use for two persons at the same time?
hehehe…u know i mean?!

Just curious what camera are you using for all of your photos?

Greetings good blog content and the articles are very helpful hopefully the contents of the article can be useful, exchange visits, hopefully my blog could also be a benefit you in finding travel in Bandung Indonesia