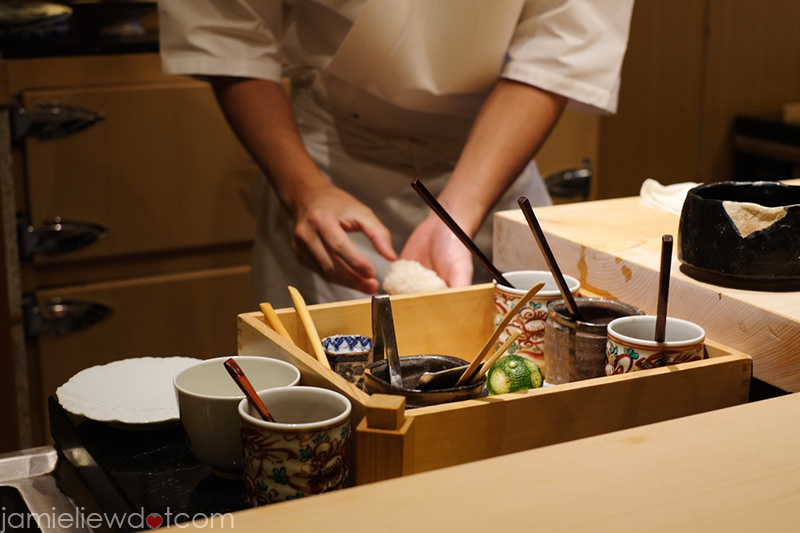 tempted by my foodie friend’s instagram, I finally got to try Sushi Saito last summer. Sushi Saito is a world renowned Sushi restaurant from Tokyo, where they used to have 3 Michelin stars. until they stopped accepting bookings, just like Jiro’s, and is now only bookable via special connections. Chef Takashi Saito has two overseas branches, one here in Hong Kong under the same name; Sushi Saito and another one in Kuala Lumpur called Taka. their style of sushi is Edo-mae, and according to my Japanese friend, each sushi master have their sort of “signature style,” where Saito’s most significant one is their al-dente sour rice.

the one in Hong Kong has 2 Michelin stars and although it can be booked without connections, it is still very, I mean very very difficult to book. my foodie friend knew the chef so you can say that I booked through connections, but even him, he books his spot several months in advance usually. because dinner is even more difficult to book (and I am cheap anyways), I booked for lunch. it costs 1680HKD for their sushi lunch and a hefty 3600HKD for their kaiseki dinner. of course, it’s all omakase, and one price. the time slots are fixed hence try not to arrive late. additionally, what makes it so expensive is probably also because the ingredients are handpicked by Chef Saito and flown in daily. freshness guaranteed.

now that we have the basic info, let’s move on to the review. 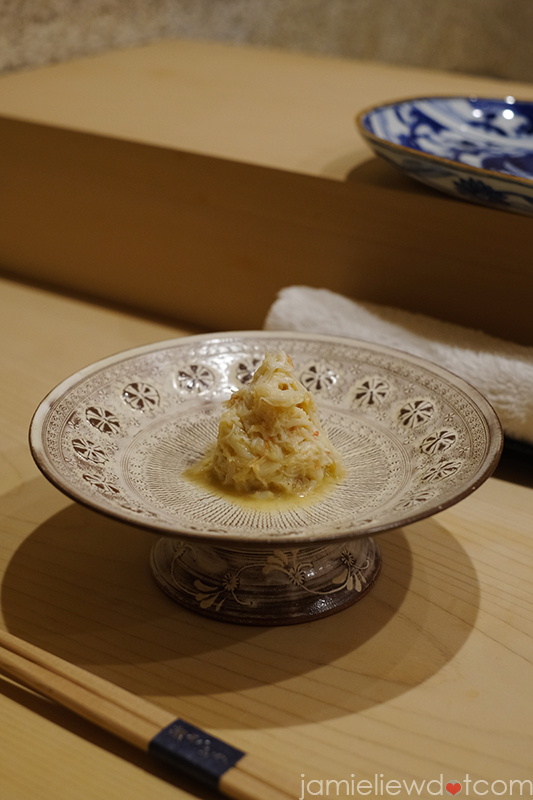 actually I lied, I’m still not ready for the food review part. can we just take a second and appreciate that beautiful piece of pottery? I absolutely adored their pottery pieces. each piece is amazing. take notice of them!

okay, okay. first dish — warm shredded Kani (crab meat) with some refreshing but hearty broth. this was actually my favourite dish. the Kani was so sweet and tender yet not soggy. it was just perfect. 10/10. 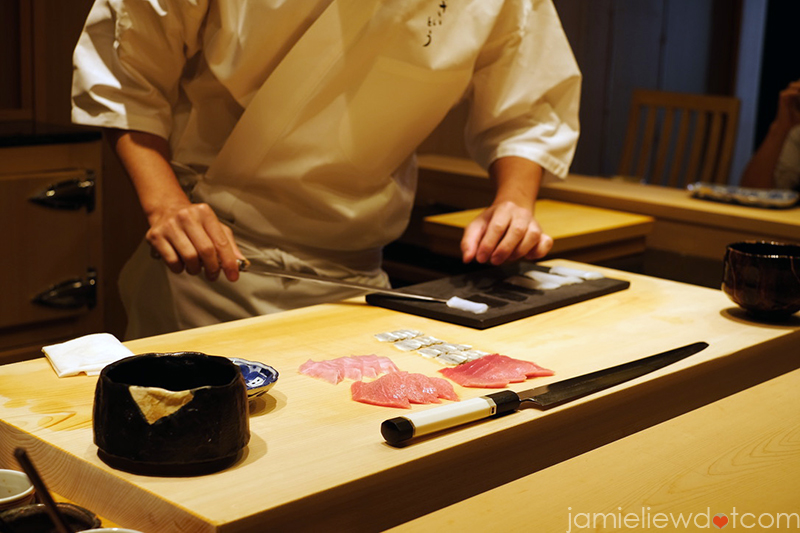 as we were slowly devouring that amazing Kani, the chef started prepping for our sushi. he carefully laid down the first few raw fishes he was going to use for our meal. 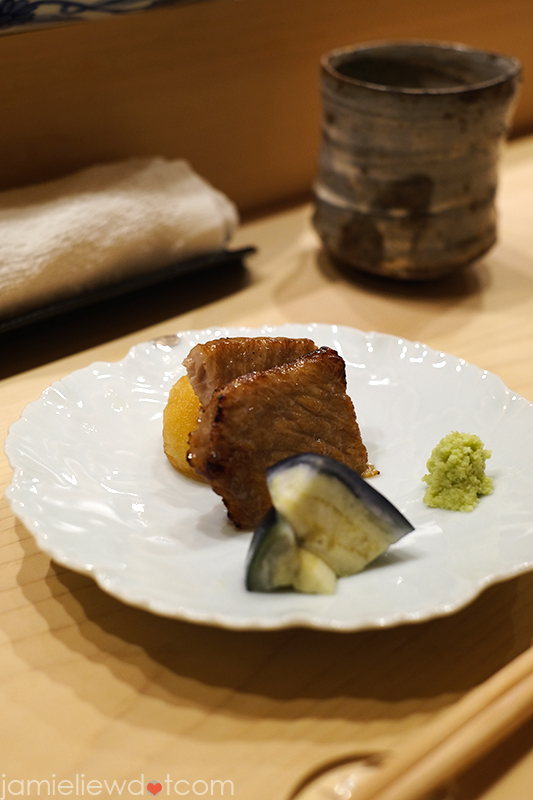 then, we were served seared tuna cheek. it feels very much like eating a piece of seared otoro. the fats of the meat just melts in your mouth. have it with a bit of wasabi? perfection. but I thought the eggplant was a bit undercooked for my liking. 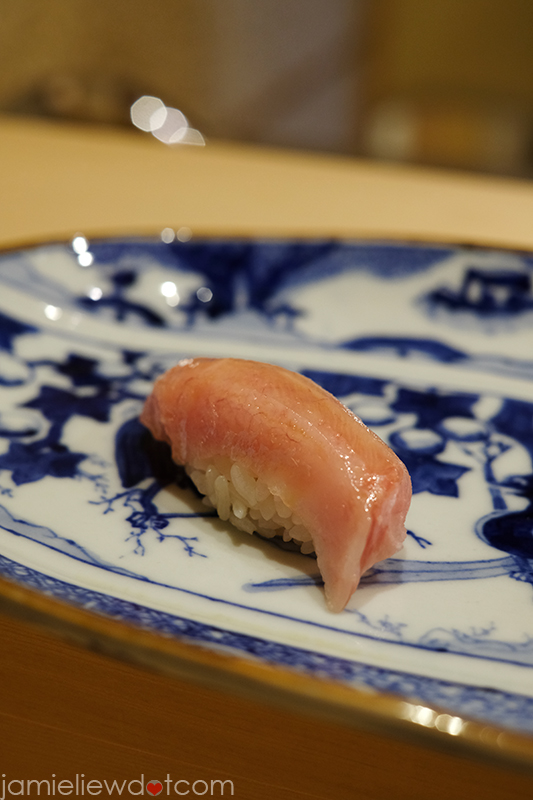 first up – Kinmedai. honestly, I am not the best in describing fish. this fish was fresh, fatty, a little bit of a crunch albeit soft to the bite. just yum. 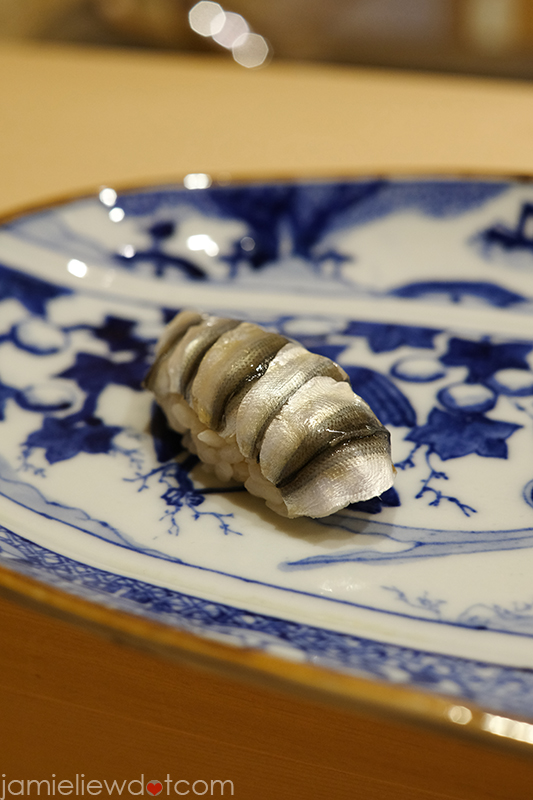 then, the Baby Kohada. I liked this a lot. Kohada is a signature of Edomae sushi, which focuses a lot on preserving fishes and bringing out an even better taste by incorporating their techniques/additional “condiments.” baby fishes are actually more expensive since it’s more difficult to prepare. it has a strong taste to it. almost like Saba, but a bit more subtle. the fish was prepped with vinegar to balance out its fishy taste and this actually went very well with their signature sour rice. loved it. 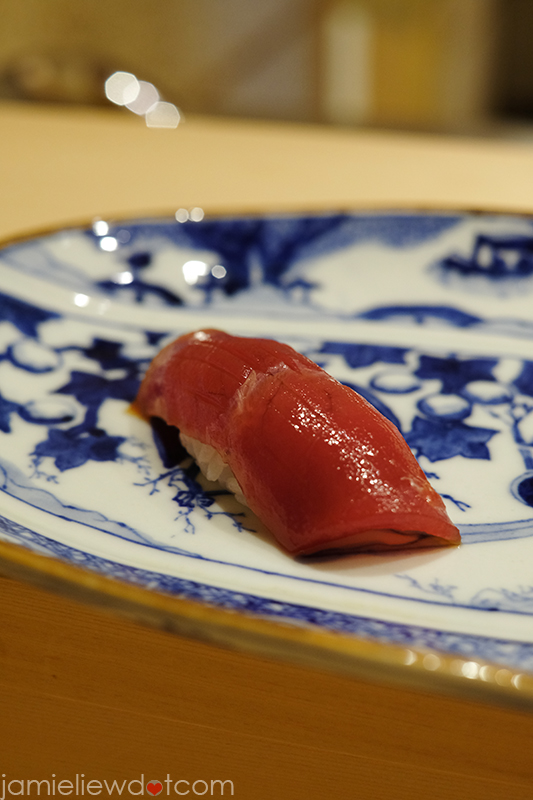 I didn’t expect the tuna trio to arrive so early but it did. as usual, they work the sushi up from the lean tuna; the Bluefin Maguro. up till that day, I don’t think I’ve ever had bluefin tuna. it’s a very expensive fish as it only breeds in the wild, and they are low in supply. but what makes it so amazing is because they have amazing marbling. you’ll see what I mean as you scroll down. 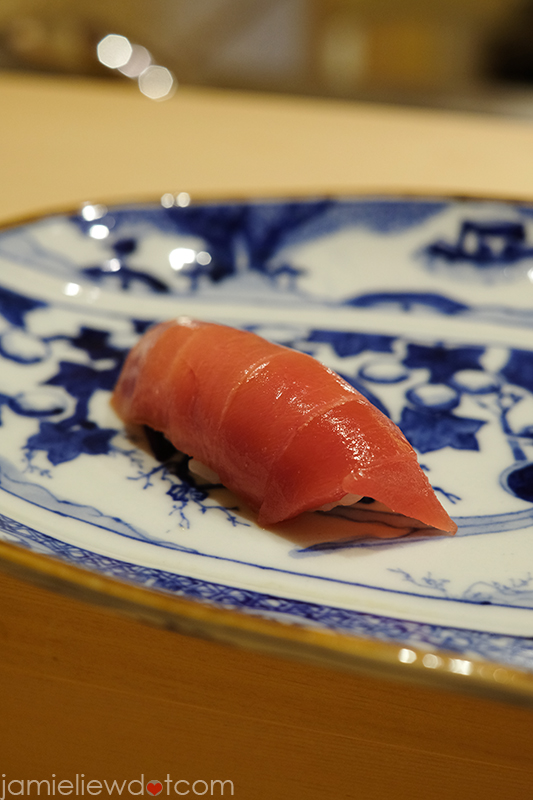 working up to Chutoro, or the “medium fatty tuna” which is usually my favourite. why I like it the most usually is because Otoro (fatty tuna) has way too much fat content for me and its marbling just isn’t well balanced enough. Saito’s Chutoro to me was alright. doesn’t feel too far from the ones from lower end but good sushi restaurants in Tokyo. however, I might’ve just been thrown off from the sour rice which was too over empowering. 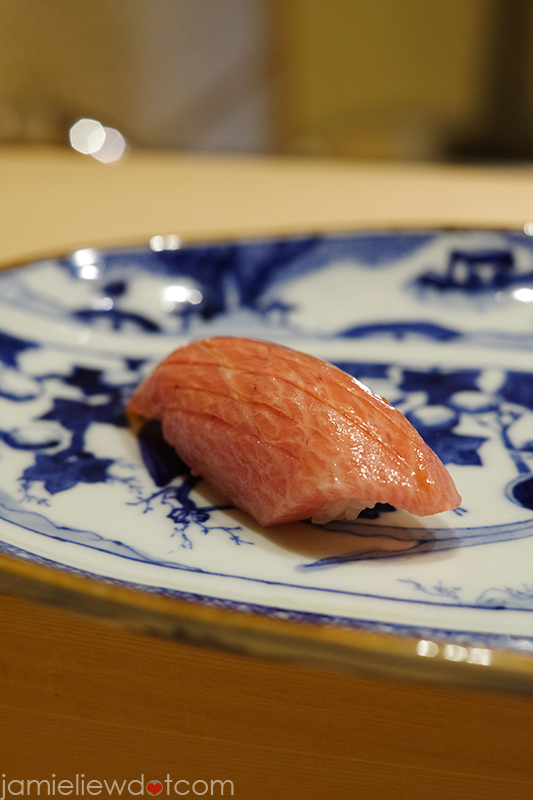 then, we have the pearl of the sea; the Otoro. I mean.. I have never eaten an Otoro that looked like this. if you were to look at my other sushi posts, Otoro is usually just very fatty piece of meat, never have I seen such marbling. although still not a fan of this rice to go with tuna, this piece of raw fish is definitely the star of the show. it was so well balanced and melts in your mouth so well. it definitely beat the Chutoro. the taste is also quite distinctive, unlike usual tad-bit fishy Tuna. 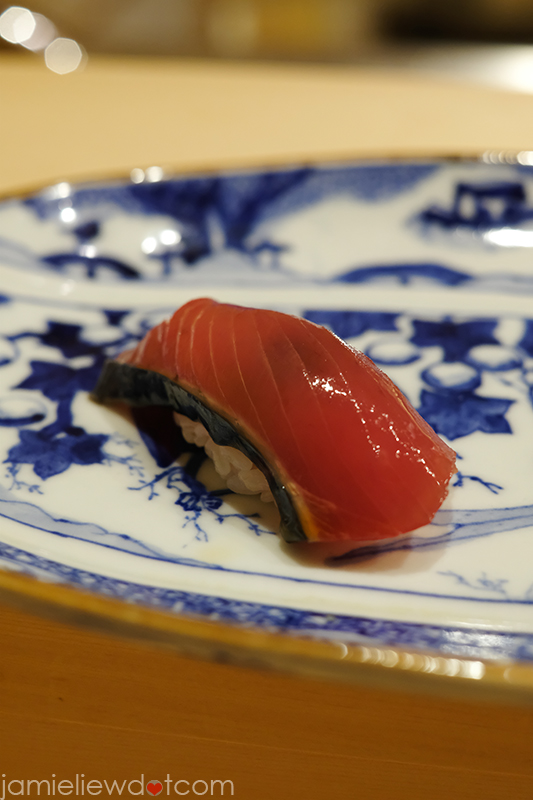 the Bonito. this was quite good. honestly think the sour rice really suit fishy fish. it was a good piece of sushi but nothing out of this world. 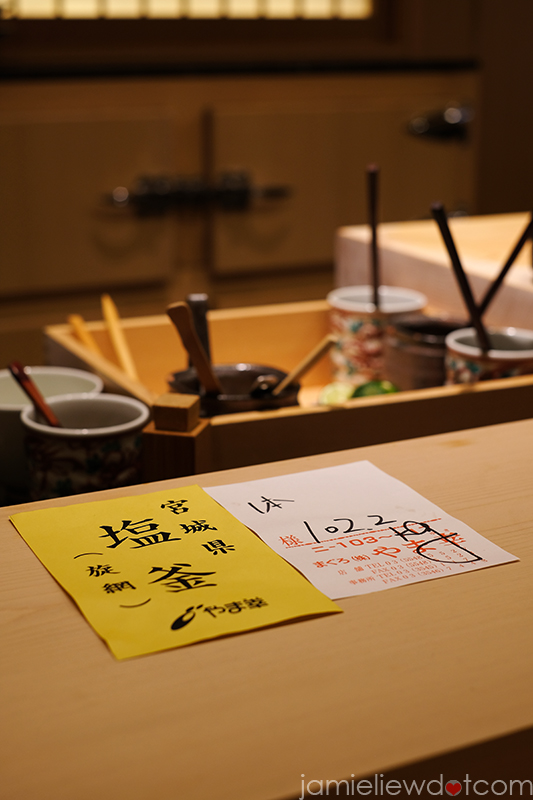 I find it quite interesting how they actually show you where exactly they get their fish from by providing its receipt from Japan. little did I know a tuna fish weighs over 100KG. that’s one huge fish that I will never be able to carry. 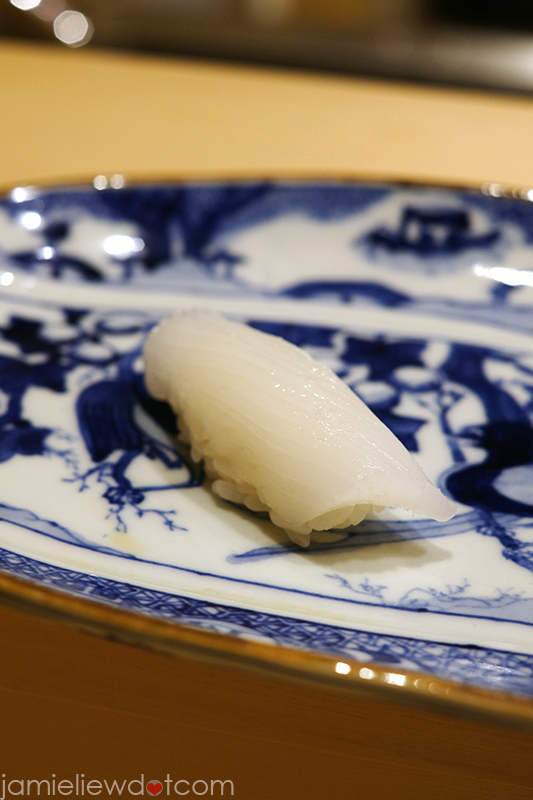 I think this was the most underwhelming for me — Ika or squid. but I got to admit, Ika is never a sushi I’d order in the first place. I just don’t like how chewy and slimy it is. I once had a really good Ika at Tokyo which wasn’t slimy and actually a little crunchy. but Saito’s one was slimy. I never thought this was going to be a part of their omakase since I always thought it’s one of those lower end sushi. but if you’re like me, remember to say you absolutely don’t eat Ika next time you go for an omakase. actually it’s quite difficult for me to omit something in an omakase because the replacement is usually even more underwhelming, and as much as I also don’t like oyster sushi, I gave it a go at my favourite sushi restaurant in Tokyo (Shutoku) and it was phenomenal. sad that didn’t happen here. 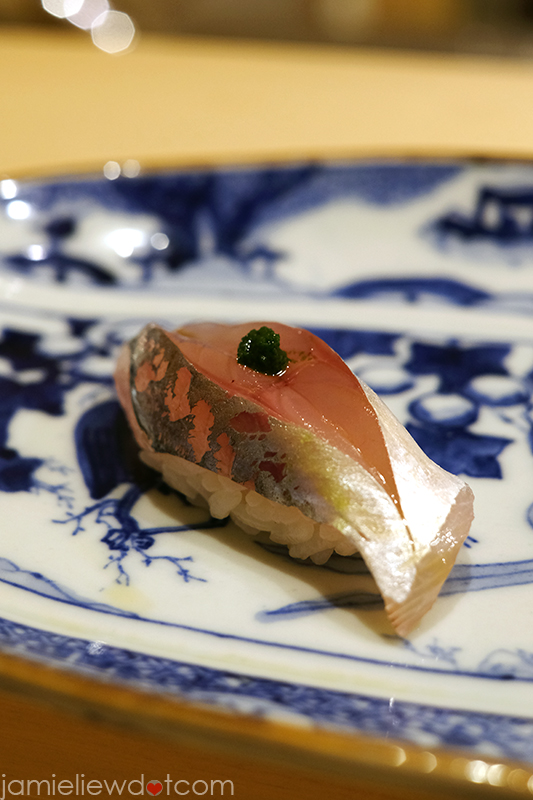 Aji — or Horse Mackerel. I guess you can kind of see it, but this is another strong flavoured sushi. again, very fresh, very nice. goes well with its rice. not sure what the green stuff is above but it wasn’t strong. everything was pretty well balanced. I liked how their aji had a bit of a crunch too. 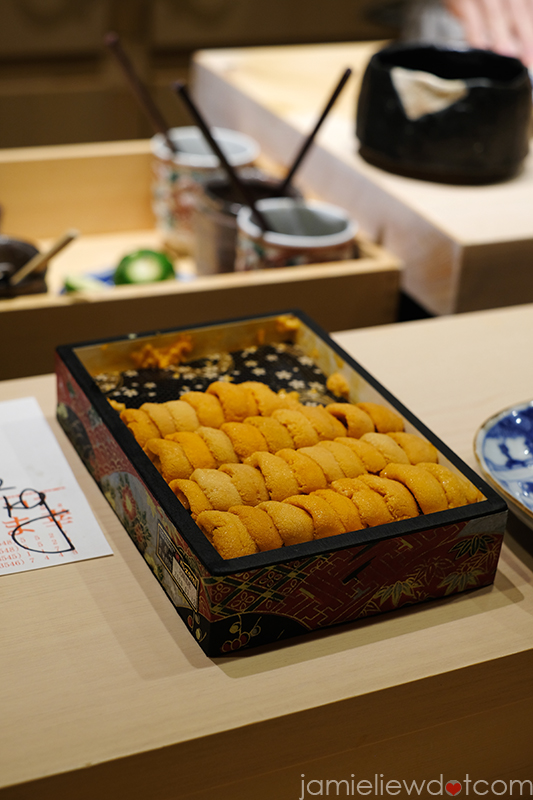 the long awaited Uni. displayed so beautifully as well. 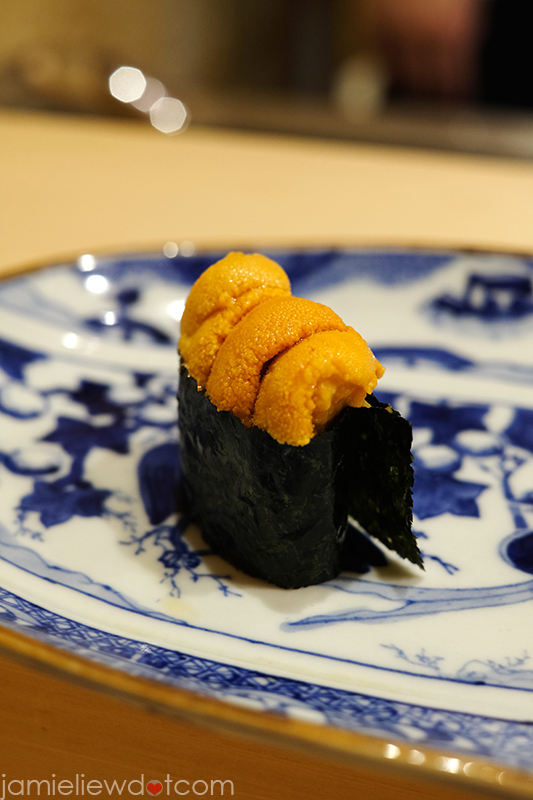 as long as Uni is fresh, I think it’s quite difficult to go wrong. and the ones here were amazing as well. never have I had such a huge uni before. this uni is quite special, it’s called the Mahun Uni or in English, the “horse poop” sea urchin. it’s because the shell looks like horse dung. the uni was creamy, and I loved how I get so much more uni than rice. mmmmmmmm. 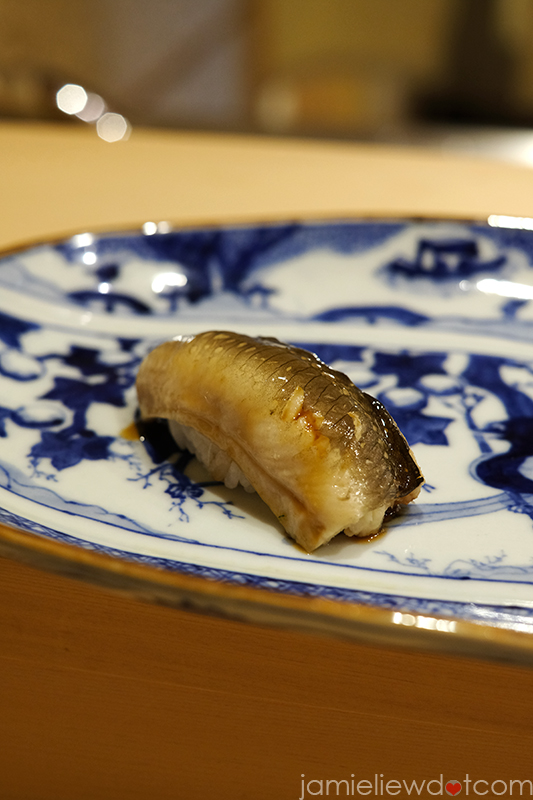 warm Anago with sweet sauce. this is a classic. the eel itself is sweet but with the sweet sauce? it’s just like a sweet ending. nothing spectacular, but usually when I have anago I get pricked a teeny weeny bit by its bones. this one was just deboned perfectly. mind you deboning these eels require tweezers, it’s difficult. 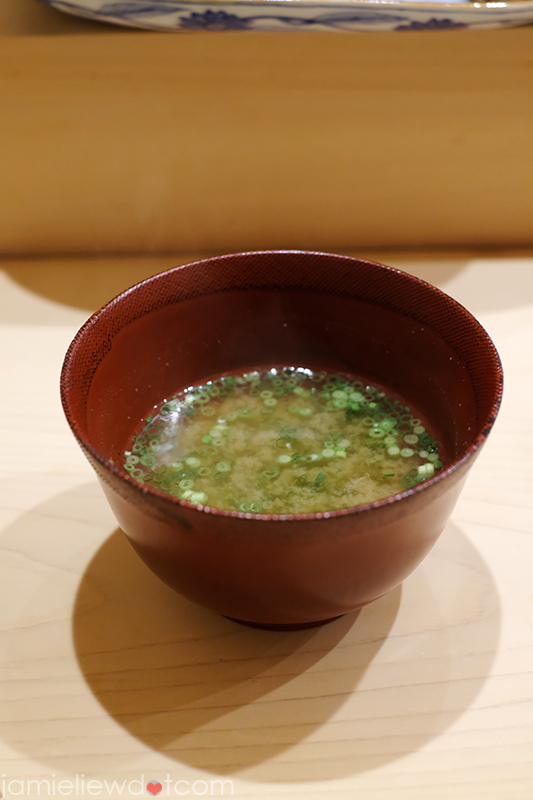 seaweed miso soup was yummy. it has a strong umami flavour and great way to end the meal. 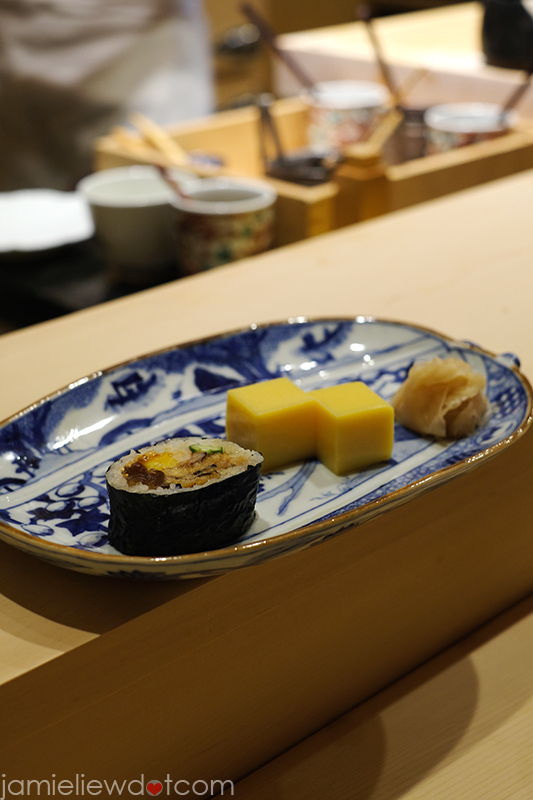 as I was preparing my stomach for desserts, the chef whipped out a Futomaki and some Tamagoyaki which tasted more like pudding. very very smooth; melts in your mouth. 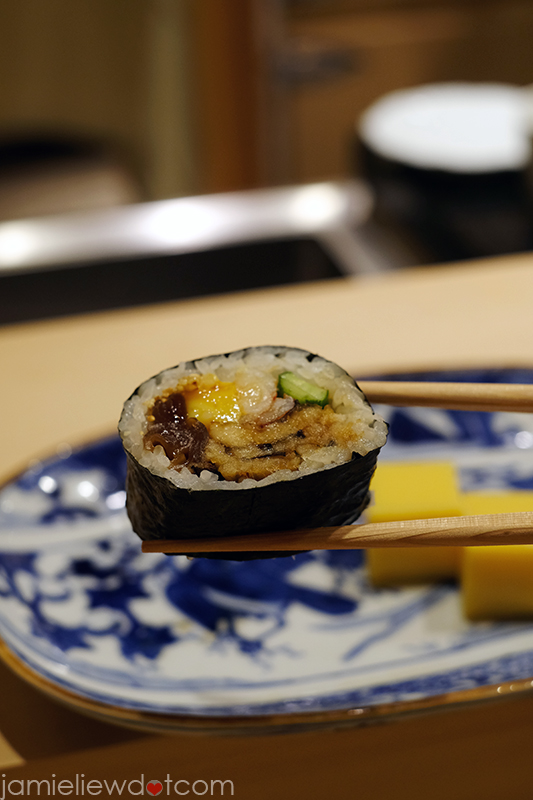 their Futomaki was sweet yet savory. it had that tamago pudding, anago and some jelly-looking thing which was also sweet. although with rich, this was a dessert. 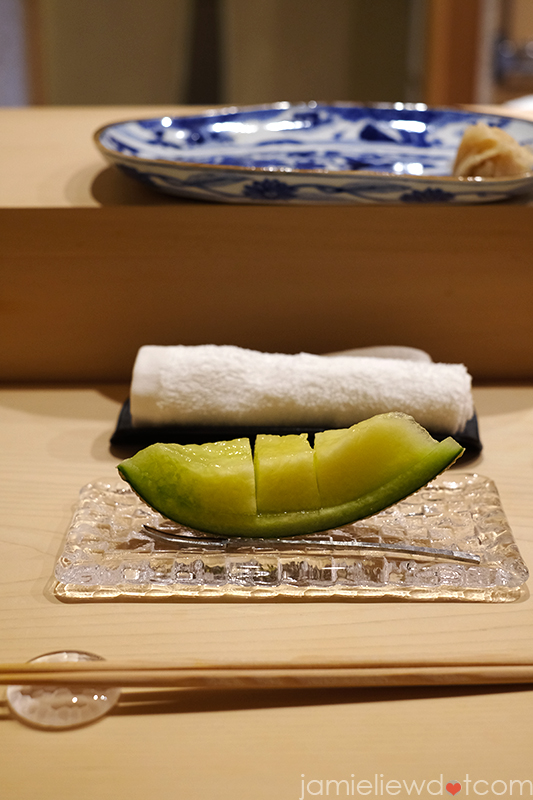 and of course, the true sweet ending always ends with MELON! it was very sweet and a little soft. it’s a wonderful end to the meal. 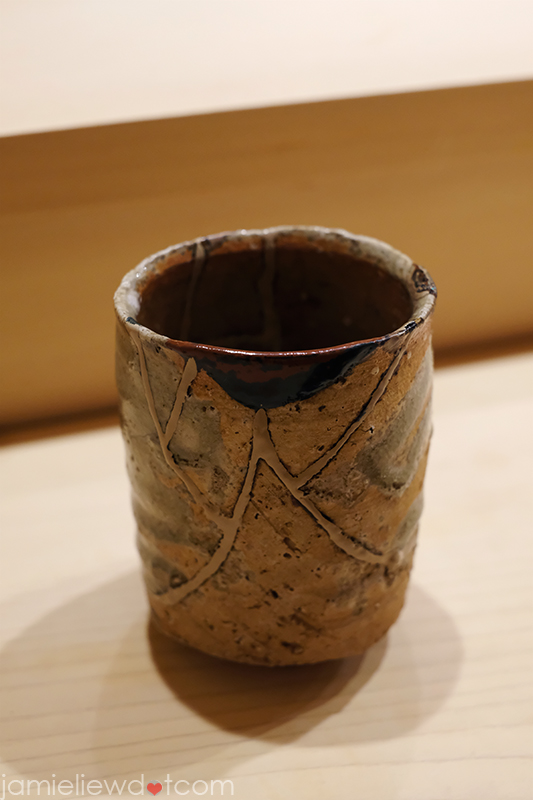 ocha was good but again, let’s just take 5 seconds to appreciate this piece of art. 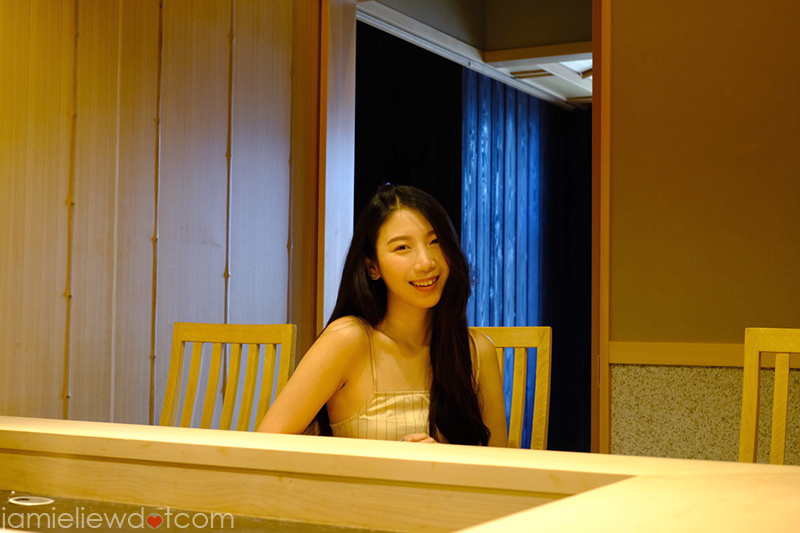 the table sits 8 but there were only 4 of us. the other two guests were there alone so I took the chance to take some pictures when the entire place goes empty for remembrance. :D. 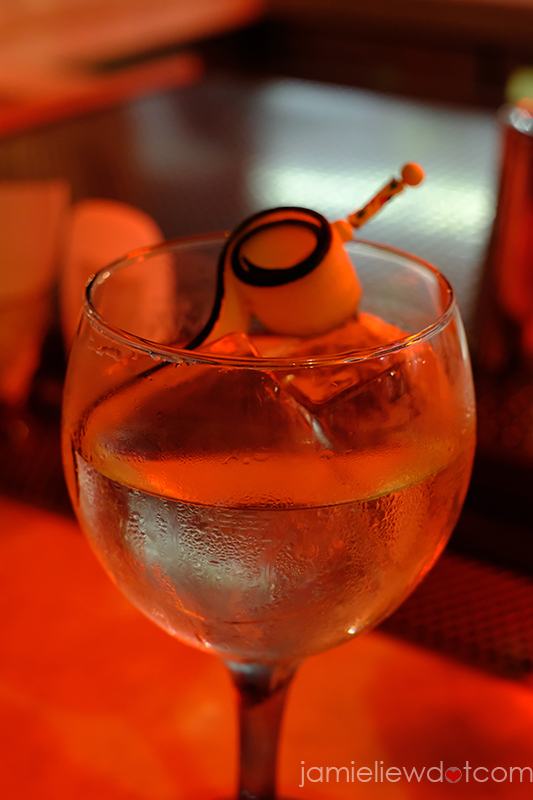 that same night I went to this bar in Sai Ying Pun called Pong where their G&T was honestly the best I’ve had in HK so far. to be honest, most G&T’s in HK are very mediocre. it’s quite pricey per glass but it was a huge glass so it’s quite worth it.

VERDICT: as much as I think it’s really good sushi, I don’t think I’ll return anytime soon unless I have a huge raise in my paycheck. my sister went to Taka in KL and she agreed that it wasn’t worth the money (especially if I were to pay for dinner). overall, I think it probably doesn’t feel as phenomenal as I thought it would be and I felt a bit underwhelmed. but I do think that it might be an acquired taste as my Japanese foodie friend comes here on a regular basis as he feels like it’s one of the best sushi restaurant.

It’s good that everything is getting better in Hongkong… people now can normally eat outside. I really hope this pandemic ends soon 🙂 It’s been dragging … a year already passed.