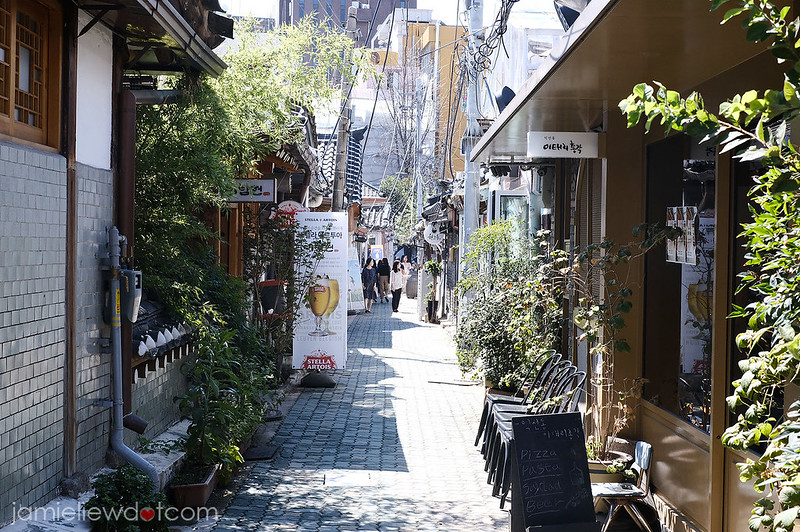 while I was in Seoul last autumn, I finally got to go to this new hipster-ish area near Bukchon Hanok Village; Ikseon-dong. unlike Bukchon, this place isn’t situated on the hill but all the homes here, like Bukchon are the only few areas in Seoul where people actually still live in Hanoks. while I have an obsession with Hanoks, I also love Hanok cafes because they seem to be Hanoks at its best.

I guess I was always very fascinated with these Korean traditional buildings because they are sturdy although built without nails, look absolutely phenomenal, normally have a 마루 (Maru; a flat elevated deck) in their yard where people can chill at and great great heating systems; the 온돌 (Ondol). 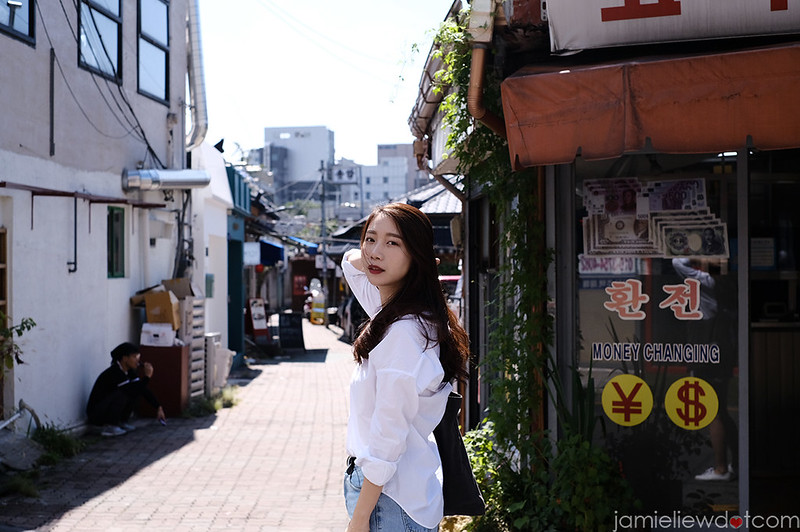 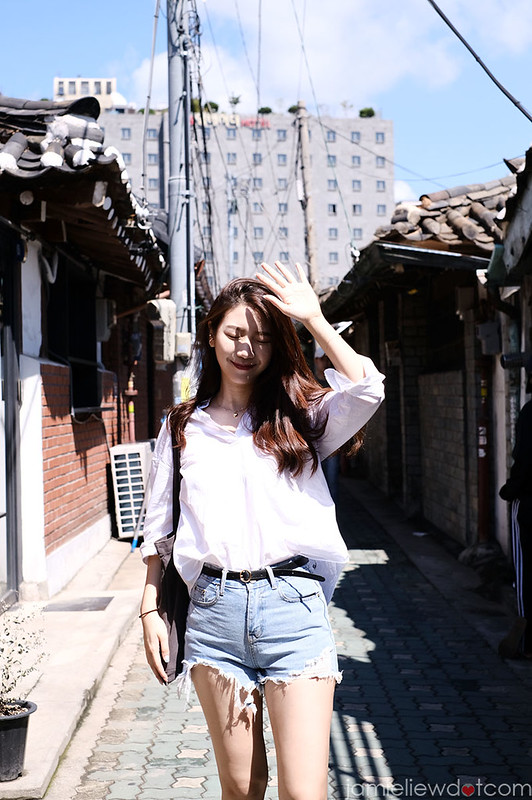 the entire area is just so instagrammable ♡.♡ 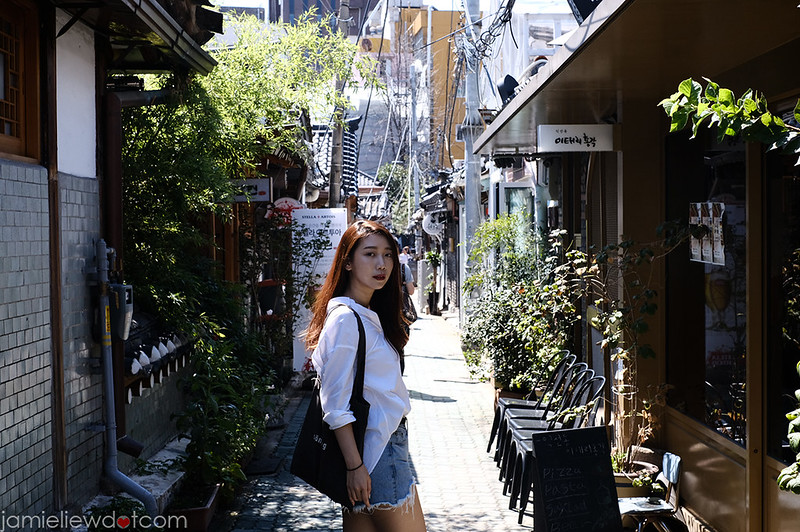 I heard that a few people bought out the entire area to develop it into this beautiful hipster area for cafes and restaurants and the land price tripled over a period of short time. but no doubt that this is one of the prettiest areas I’ve ever been in Seoul. especially because it’s less commercial and most locals like coming here. 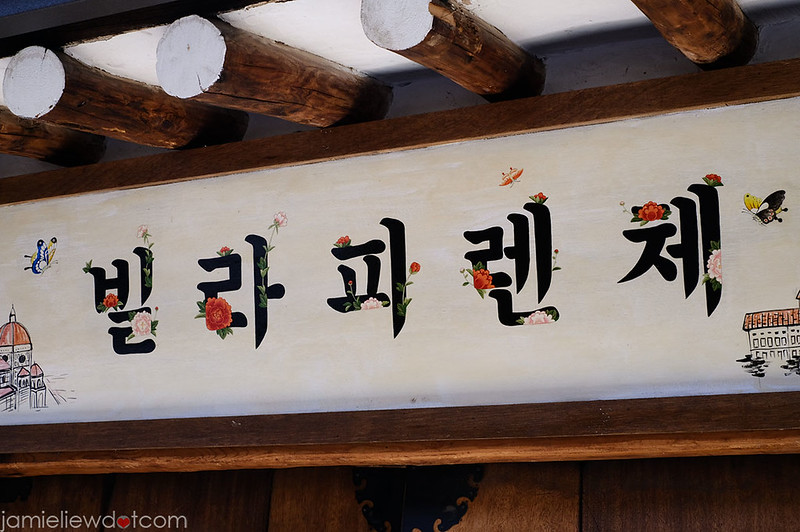 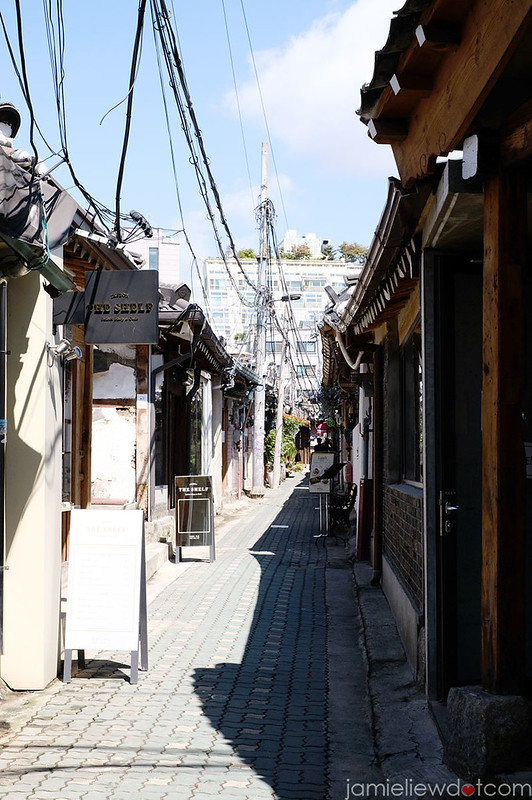 I came here at 11am and the streets were outright empty. perfect for taking pictures hahaha. but in just an hour or two, the place was flooding with people. 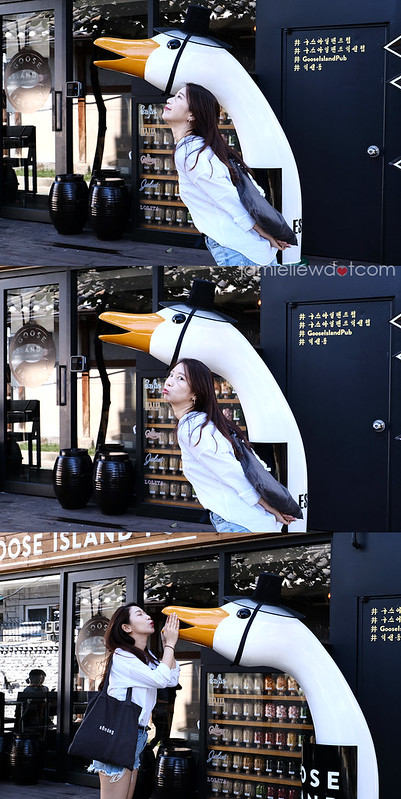 when I see this goose, I can’t resist. 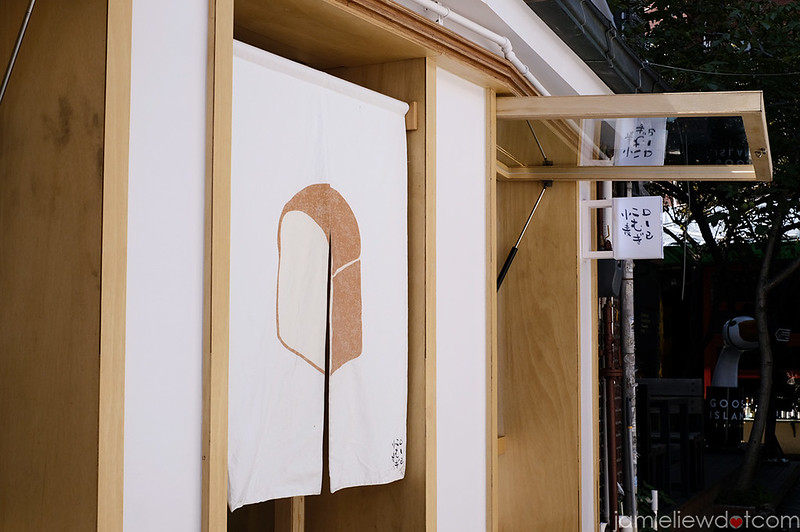 as for our brunch, I picked this popular bread shop which was.. even at such an early hour, packed with people. this Japanesey bread shop is called 밀, or Mil, which translates into wheat. the minimalistic designs of the shop already made it very appealing but.. 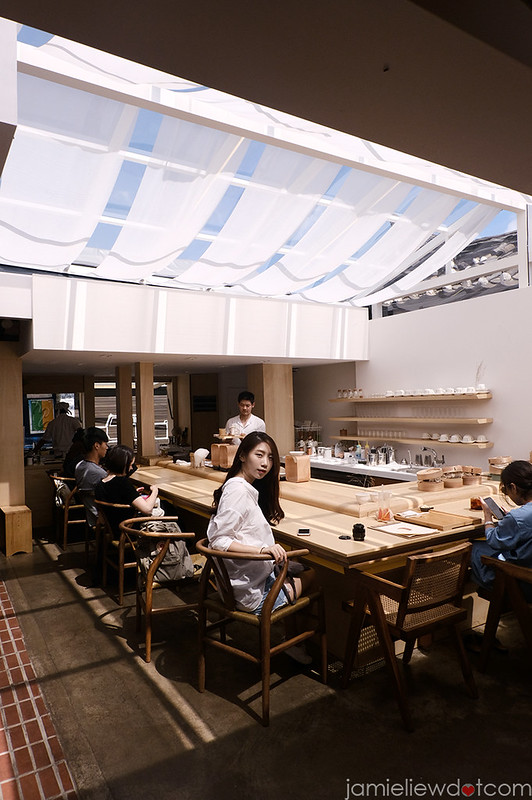 the interior. was just.. WOW. it can get a little sunny but it was just so relaxing. I felt like I could spend all my time here, eating bread. lol. 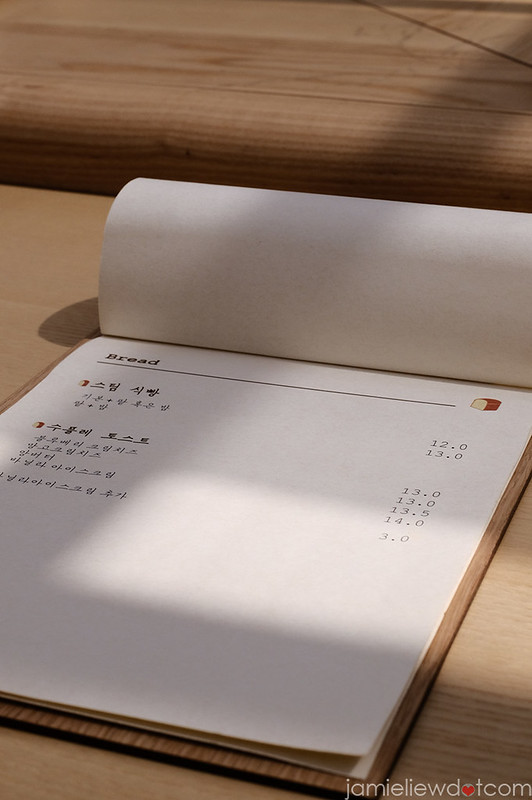 they are popular for their toasts and bread, which costs a hefty 12-14USD for literally what you could get for wayyyy less. 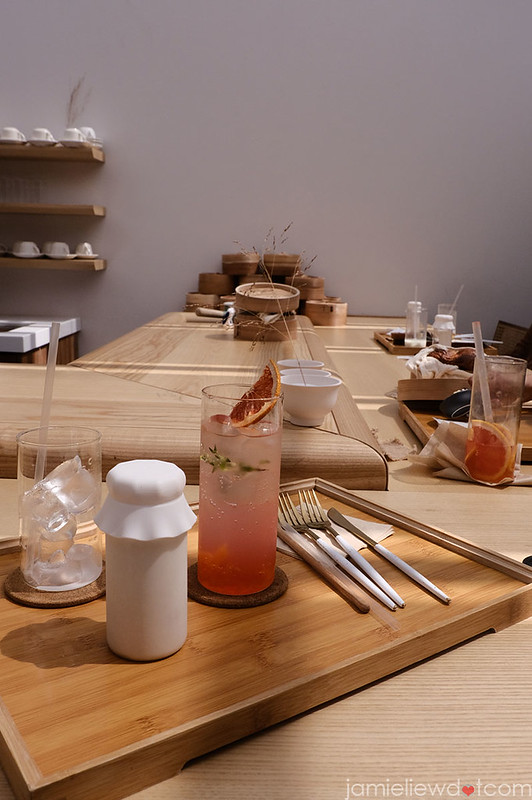 but I must admit, the presentation of everything is so on point. look at how cute that milk bottle is (they are famous for their milk) and how visually appealing does that grapefruit soda look. 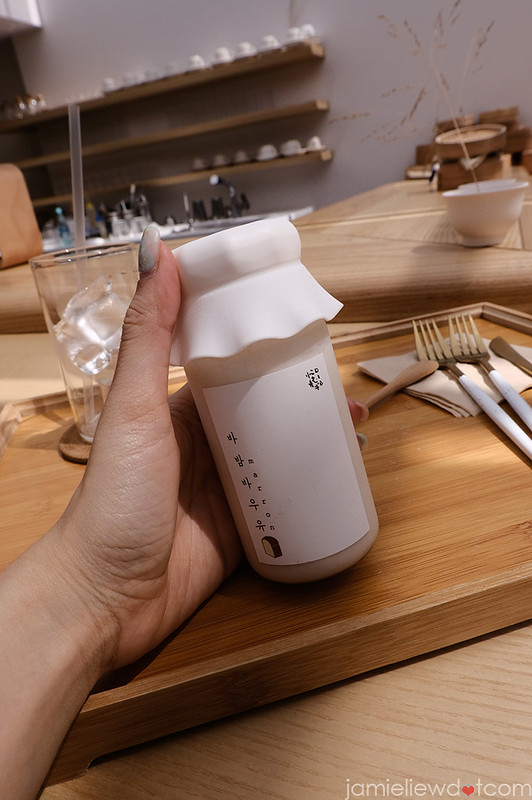 I got the “marron” milk, chestnut in Japanese. I really like chestnut, but I thought that it was a little too sweet for my liking. I still completely dig the cute bottling though. isn’t that marketing at its finest? haha. 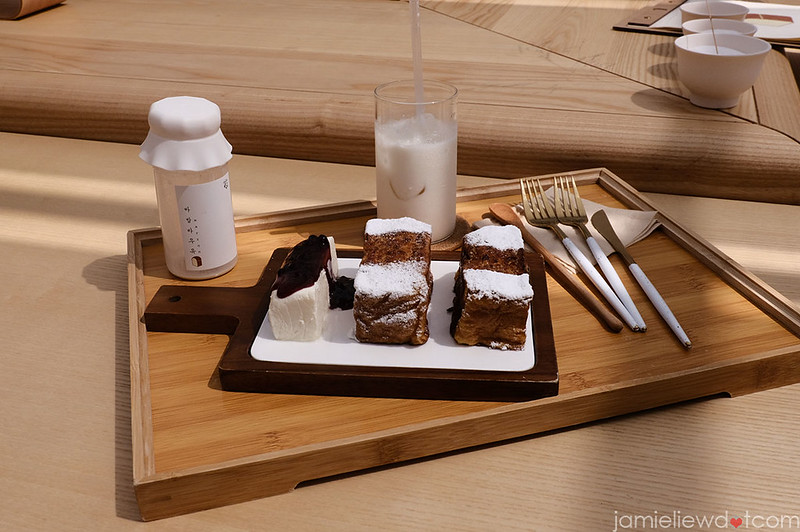 I ordered cream cheese toast where it was literally a slab of cream cheese with some blueberry jam and some really good toast. 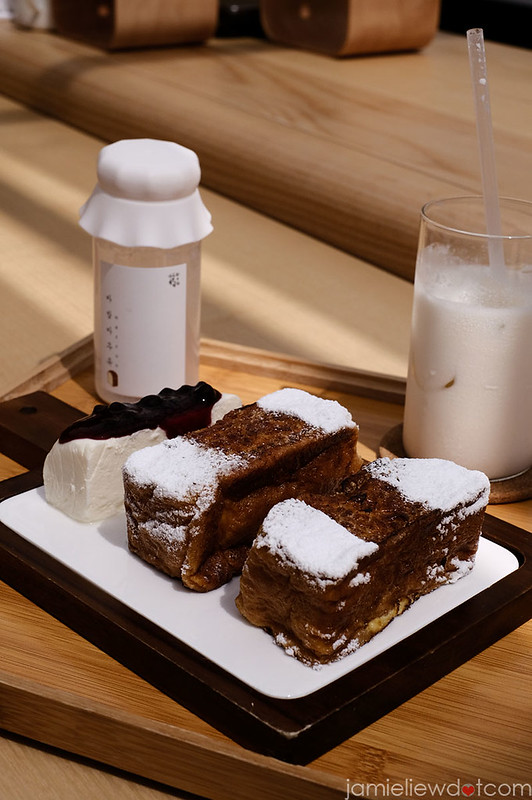 while I really enjoyed the toast, I didn’t think the cream cheese went amazingly well together. perhaps I should’ve gotten the three type of spread toast where from my observations looked like black sesame, cream cheese and red bean. or, their famous buns which.. I weren’t feeling for buns that day. but if you go, please order the bun and let me know if it’s good. 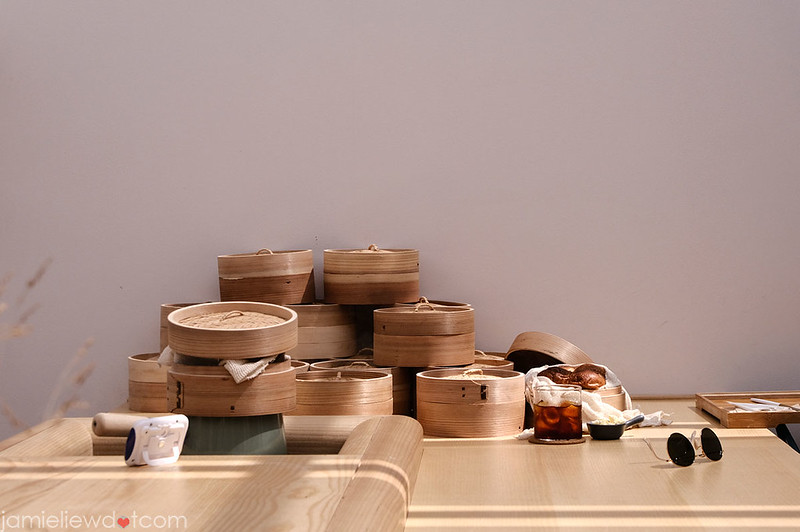 I think the most popular buns here are the butter and red bean bun. they steam them in these little dim sum trays and it really looks pretty dayum fresh. 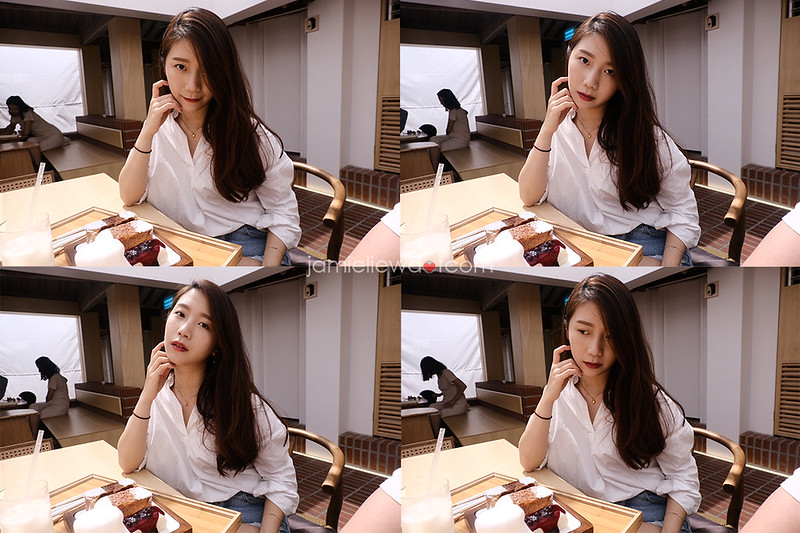 good lighting IS an excuse to be vain. 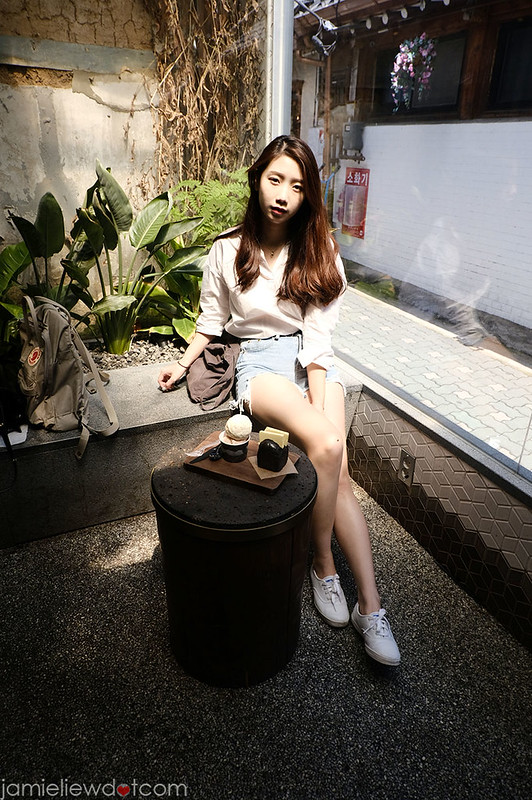 after that very very beautiful cafe, we thought we’d cafe hop (couldn’t do more than 2 in the end because we were too full) to others like this one, where they sell slabs of butter inserted into charcoal bun and some odd flavoured ice cream like plum and misutgaru (some thick wheat drink which is real healthy) 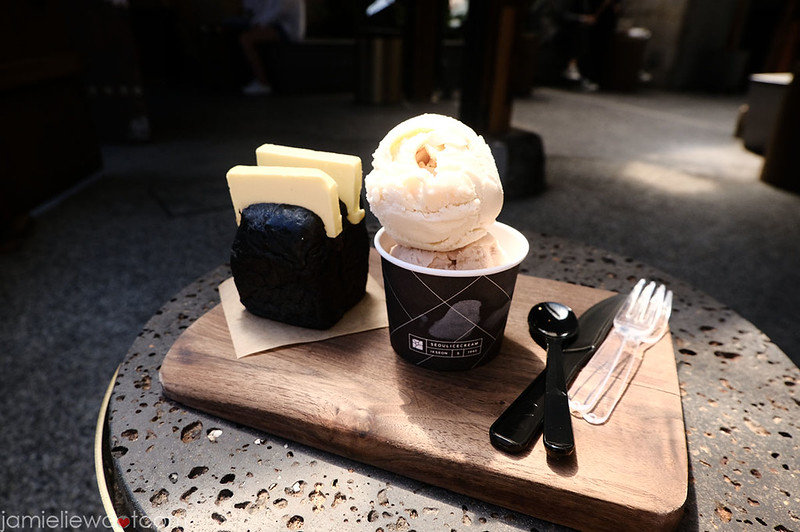 while I’d give the interior 10/10 points for creativity and originality, the bread and ice cream were kind of meh. not to mention it was very difficult to eat that bread. no matter how you push that butter into the bun. 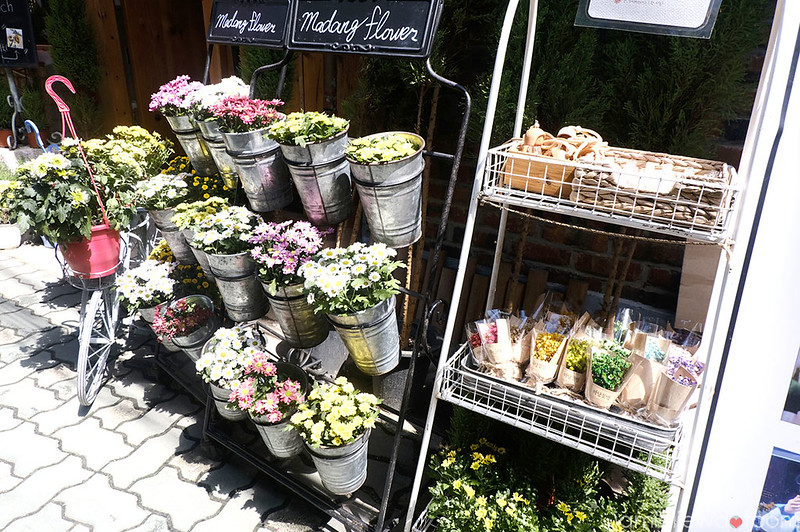 but yet I still like how romantic the place looks. 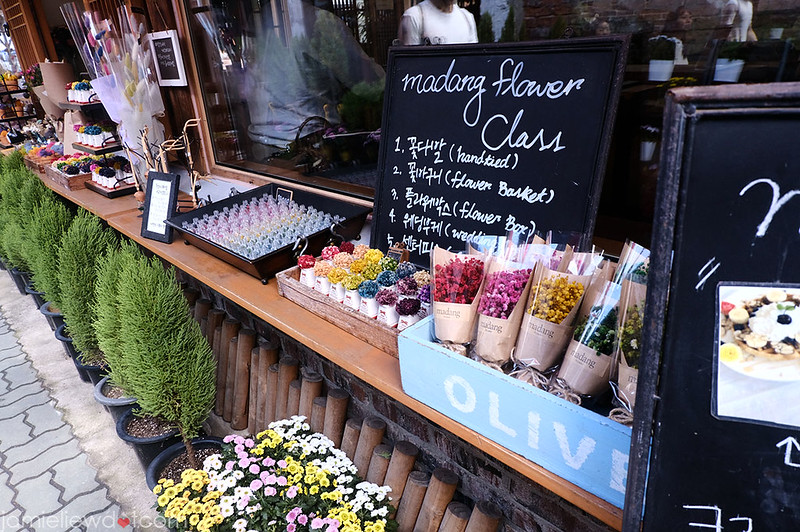 it’s perfect for dates and you’ll be spoilt for choices of cafes and restaurants to go to. 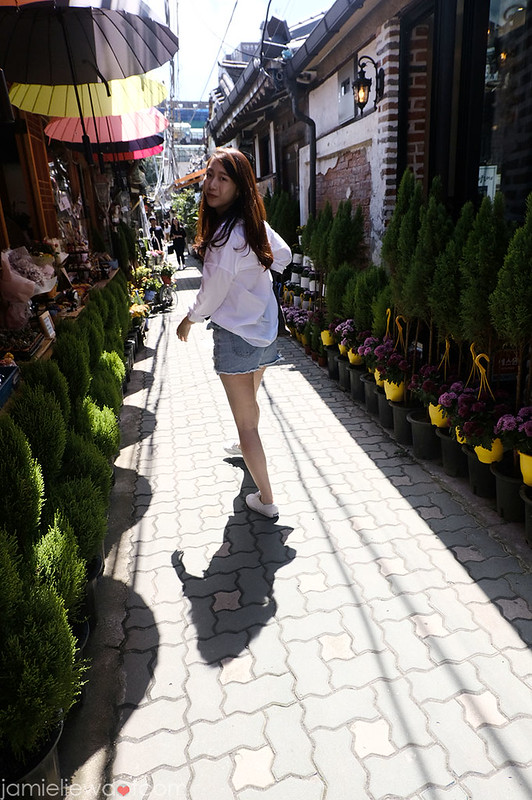 I know I’ll definitely be going back to Ikseon-dong. afterall, when I was there, the place was sort of still developing, there are probably even more pretty restaurants and cafes now. but then again, don’t get your hopes up too high for the taste of food here, but everything definitely is very original. (PS: I have very high standards in food according to my friends) 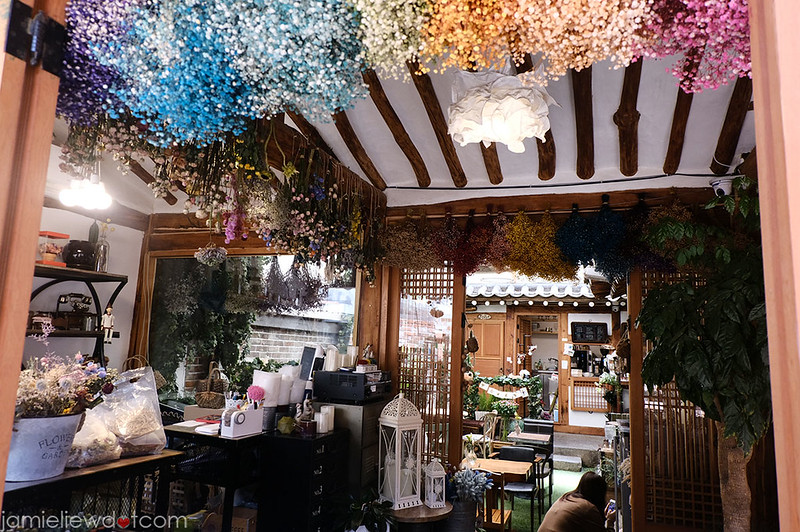 I mean.. ain’t this just beautiful? 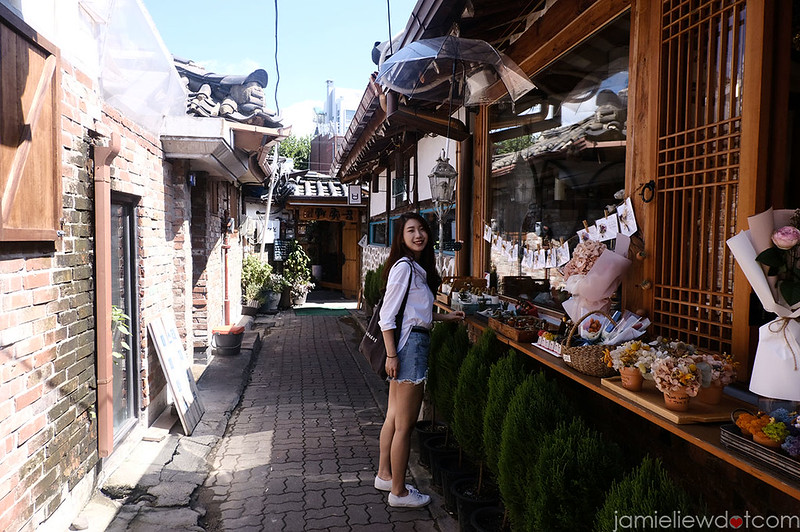 I really really recommend everyone (who loves hipster cafes esp) to come here. it’s also not that difficult to find. while I mentioned that you can easily walk here from Bukchon, it might get quite confusing if you do not have internet and a Korean map (like Naver). in that case, just get out of Jongno-3-ga and follow the crowd!