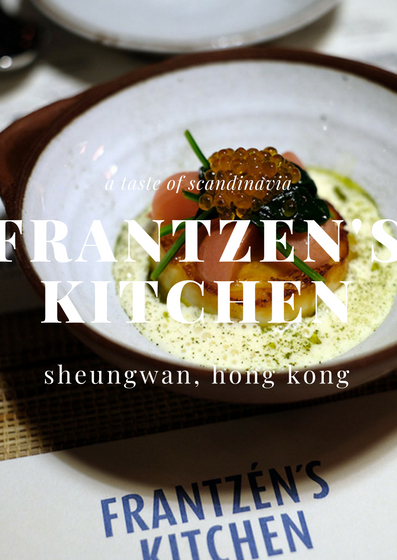 Frantzen’s Kitchen is probably the only one true Swedish restaurant in HK and it is also opened by Michelin 3 star chef Mr.Bjorn Frantzen who’s restaurant Frantzen is the first Swedish restaurant to get 3 michelin stars. funfact: they just got the 3 stars this year! (the restaurant in Sweden that is.) I was very excited as I actually came here on my birthday and it’s actually my second time having Nordic fine dining, the first being at Taipei’s MUME. and also because of the recent modern cuisine taking the world by storm, especially when NOMA in Denmark was ranked as the best restaurant in the world. have you tried Nordic fine dining yet? 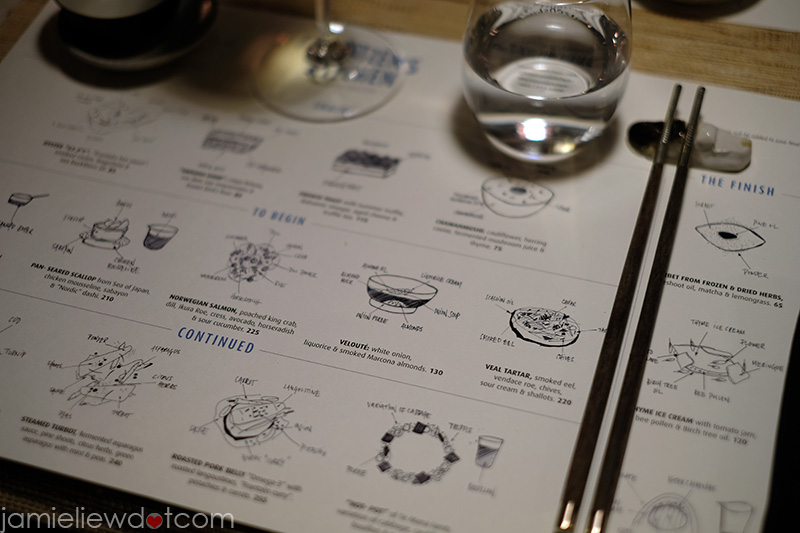 the restaurant is very much bistro-like. similar to that of MUME in Taipei. apparently their toilet’s very Scandinavian (deemed by my Scandinavian bf) and so is their interior. shame that I didn’t get any interior picture but let me tell you, they use Aesop handwash. it may be just my own generalization but all restaurants I’ve been to with that luxurious soap in their washroom tastes pretty darn good. just shows how much taste they have for er… handwash.

seems like I steered too far from my original topic. where were we? right, the menu! the menu’s not very diverse, there’s only four categories of food:

where the snacks are.. one mouthful bites, to begin’s two, to continue three and back to a two mouthful dessert. okay I kid. but it’s not that far if you were to eat them in “mouthfuls.” I really loved the illustration of their menu as it’s really detailed, fun and as I look at it I get to wonder how it may taste and look. the prices ranges from 65 to mid 200. however, the recommended portion will be to order two of the snacks, to begin, continued and 1 of the the finish for each person. not cheap at all. expect to pay around 1000HKD per person at the very least. the michelin guide page’s price is absolutely misleading haha. 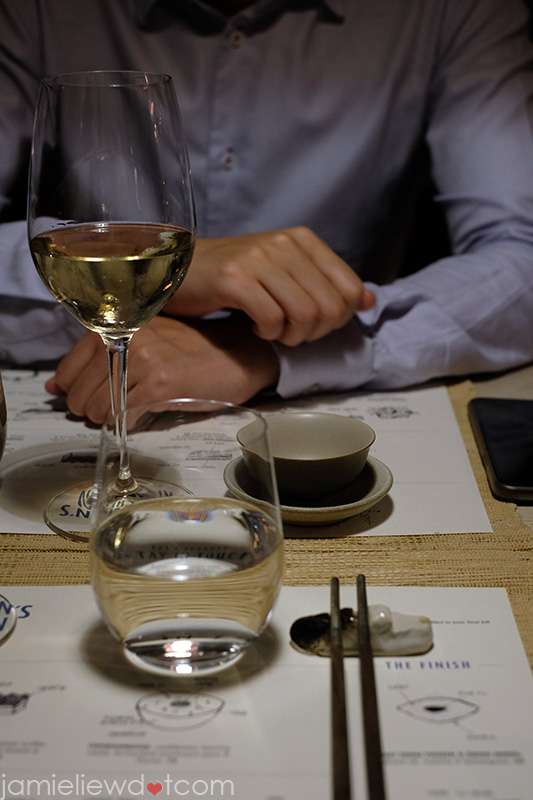 here’s my date in my second favourite colour; blue. as we are in HK, the cutleries and table ware were pretty Asian with a great touch of handmade clay chopstick holder. for those of you who don’t know, I was once obsessed with pottery and I have hundreds of handmade clay products at home. therefore I really appreciated the little details as such. 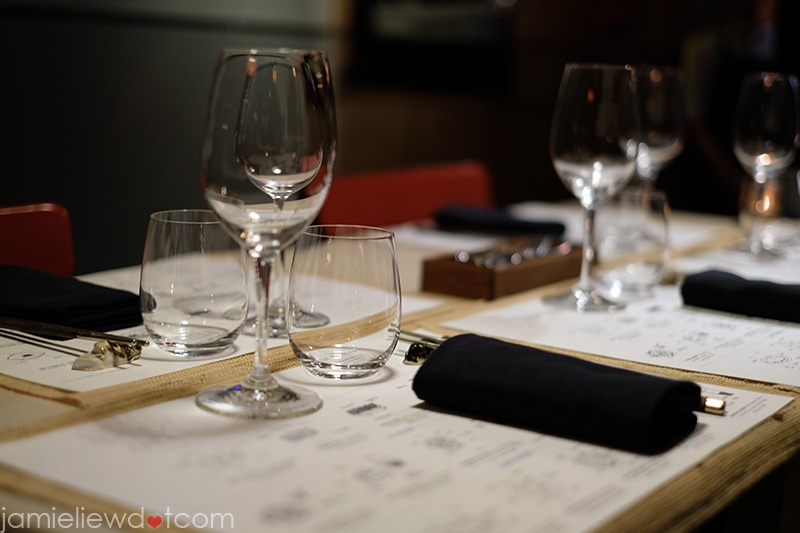 the setting of each table is pretty simple, but chic. I also wonder if they hire people by looks here because the chefs and waiters are pretty darn hot. however, just like many HK restaurants, the restaurant here is as small and not much space.

so are you ready for the food? 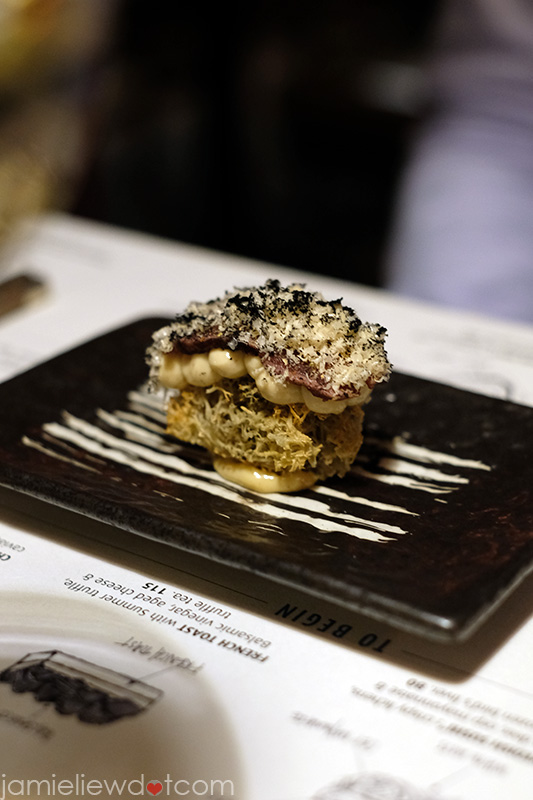 first up we have something called the “Swedish Sushi” and this is of course ordered by my Swedish boy. the description of this is pretty interesting: crispy lichens, roe deer, cep mayonnaise and frozen bird’s liver. I have no idea what’s lichens, cep.. and I definitely have never had a bird’s liver before. saying that out loud made me feel like a vampire lol. “I crave for frozen bird’s liver..” alright I’ll stop with the very, very cold jokes. this “sushi” is the size of a tad big bigger nigiri (sushi) size. I couldn’t really explain the taste but it’s somewhat a familiar but different taste. it tastes somewhat like melted Swedish butter (if there is such a thing) with a great balance of crunch and a hint of foie gras. I guess a bird’s liver is not very different from that of a ducks?

but it was absolutely delicious. but to have something so good just in one bite would be my only complain. 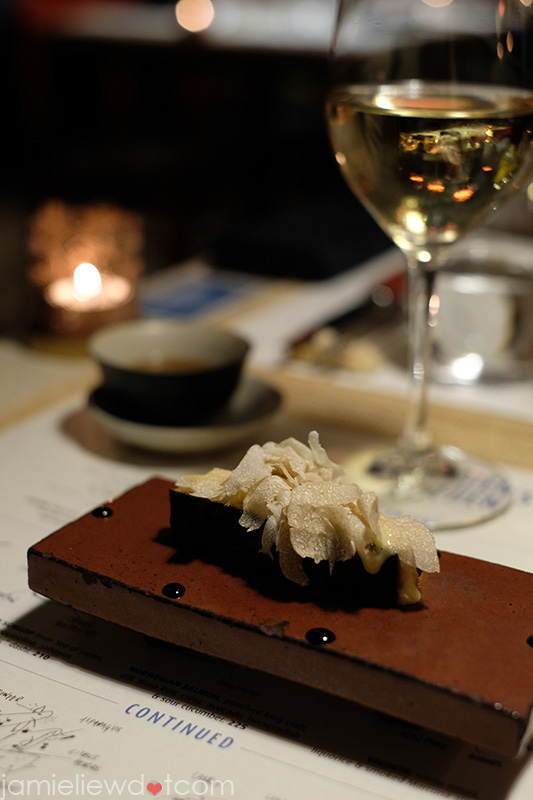 next we have the house favourite “french toast” with summer truffle, 24M (if my memory served me right) aged balsamic vinegar, aged cheese and truffle tea.

I am not sure if I liked this as much as the empowering Swedish sushi which set my tastebuds on fireworks. however, I must say that the balsamic vinegar was very fragrant, like no balsamic vinegar I’ve ever had before. and if you don’t know, aged balsamic vinegar are very expensive. so much so that they had them dotted at the sides of the already tiny ceramic dish. that dish looks amazing though don’t you agree? the whole outlook of it is just so perfect but again, the size of it is smaller than one slice of finger sandwich and shame that the summer truffle wasn’t very.. truffle-y? to me. the taste overall was very subtle. good but I’m not sure if I’ll pay another 115HKD for another bite. 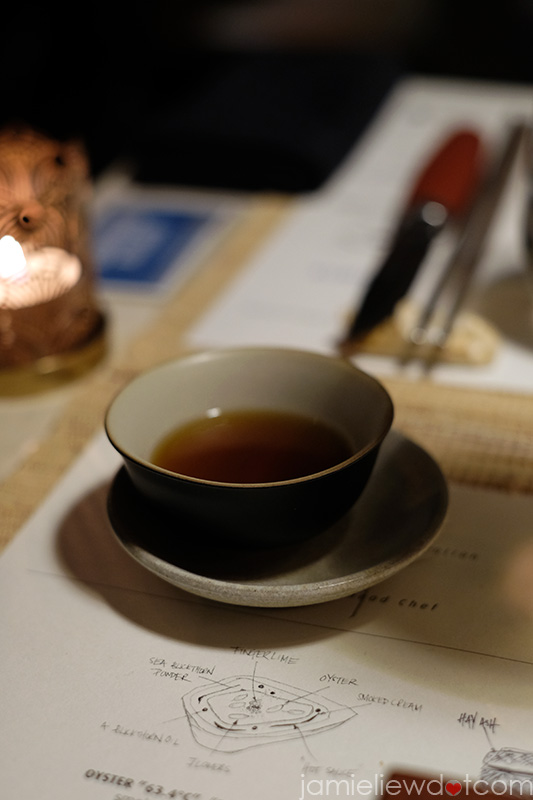 but on the other hand, the truffle tea though, was out of the world. it’s served together and because we only ordered one, they kindly split the tea into two cups. you are supposed to sip the tea as you have the french toast (which doesn’t remind me of France actually) which was quite a dining experience. the truffle tea kind of reminds me of the days where I would sip on my grandma’s “chicken essence” as a kid and thought how amazing that tastes. it’s savory but light. 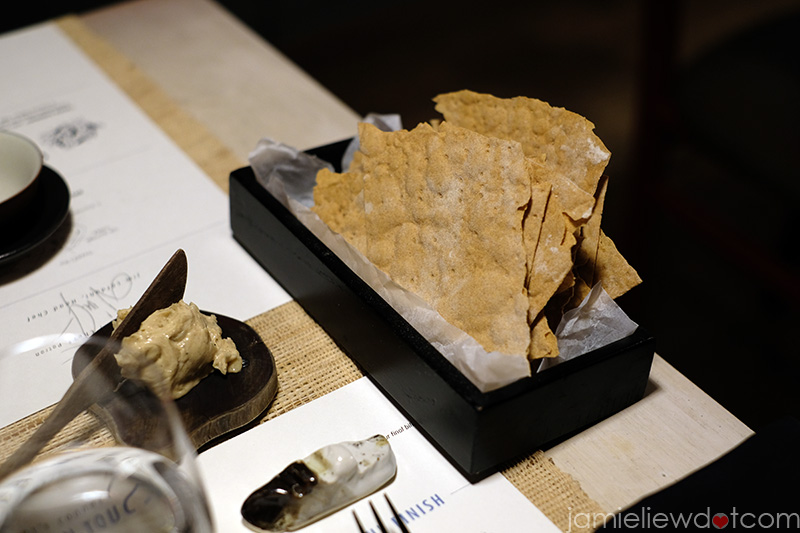 they also serve knackerbrod on the house together with some home-made coffee scented (not sure what it was but that’s how it tasted to me) butter. knackerbrod’s actually Swedish crispbread and apparently all Swedish household have them at home. it’s kind of like the Swedish version of the Chinese square biscuits perhaps (if you’re Chinese, you know you have it at home! or at least used to have it at home!). 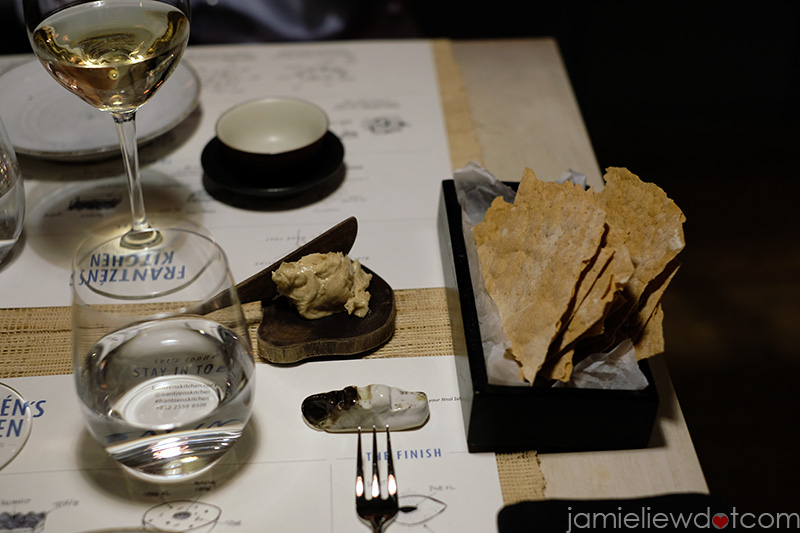 knackerbrod are normally much thicker but they made it so paperthin it wasn’t filling and just great to have as an anju (literally drinking food in Korean) while drinking. 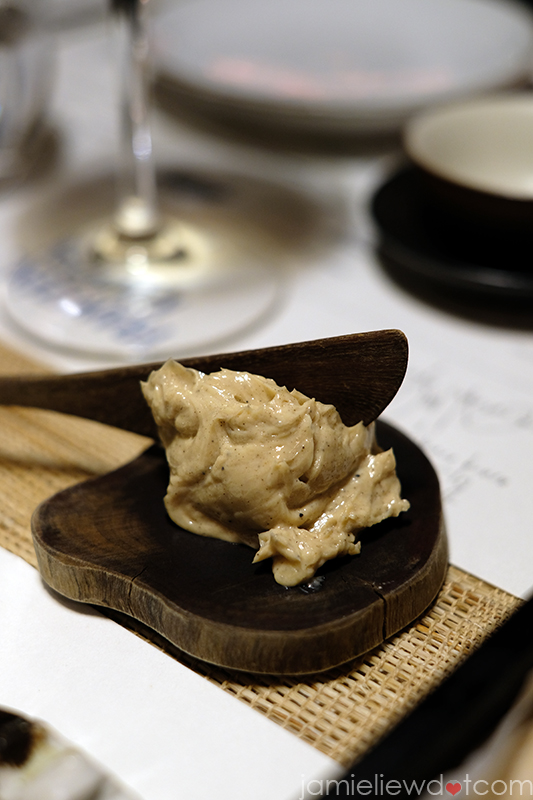 here’s a closeup on that delicious butter! 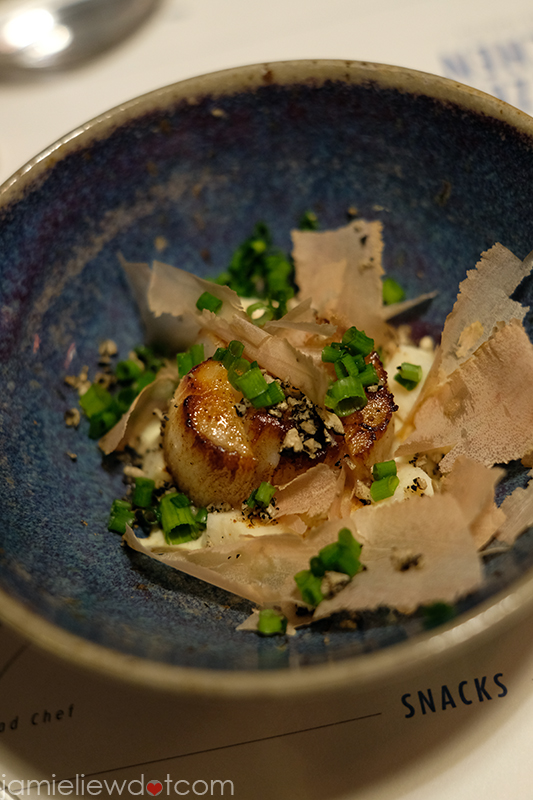 next, we have these huge pan-seared scallop hailing from the seas of Japan. and this, my friends cost a hefty 210HKD. for ONE. let me repeat, ONE scallop. no doubt it’s huge but 210HKD for ONE scallop sounds very ridiculous don’t you think? this dish was very fusion and of course, these scallops were so fresh they were literally bouncing in my mouth. this dish is served with chicken mousseline, sabayon and “Nordic” dashi with some bonito flakes sprinkled on top. I wasn’t a fan of the chicken mousseline but it was overall quite a good dish. a little too salty for my likings. but that was one scallop of a lifetime. never had scallops so well cooked in my life. but to have this again, I would only pay 100HKD tops. =X. 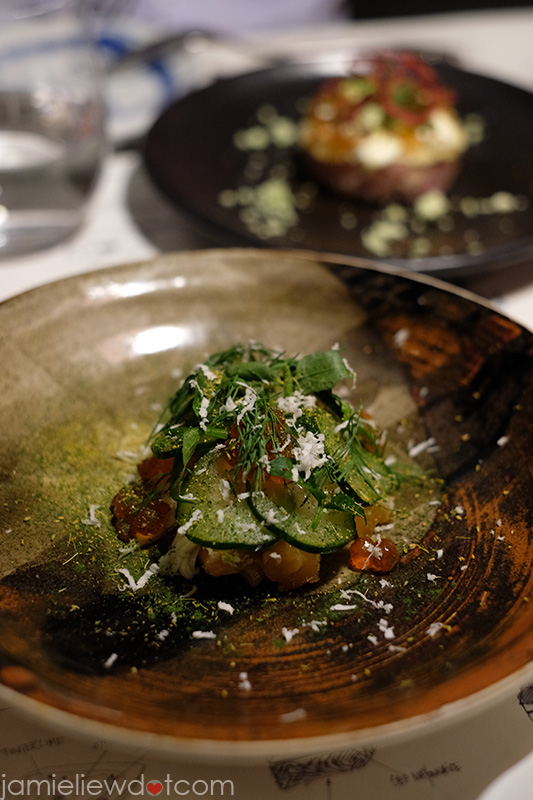 this is one beautiful dish. no matter how I look at it it looks beautifully Nordic. this is called the “Norwegian Salmon” where it is served with poached crab, dill, ikura roe, cress, avocado, horseradish and sour cucumber. this dish just screams Sweden. I don’t think a dish can taste anymore Swedish than this. it was absolutely stunning from its presentation to its taste. everything was fresh, carefully seasoned and the subtle seafood taste together with the fragrant dill was just dancing in my mouth. I really liked this dish but I just wish there were more. 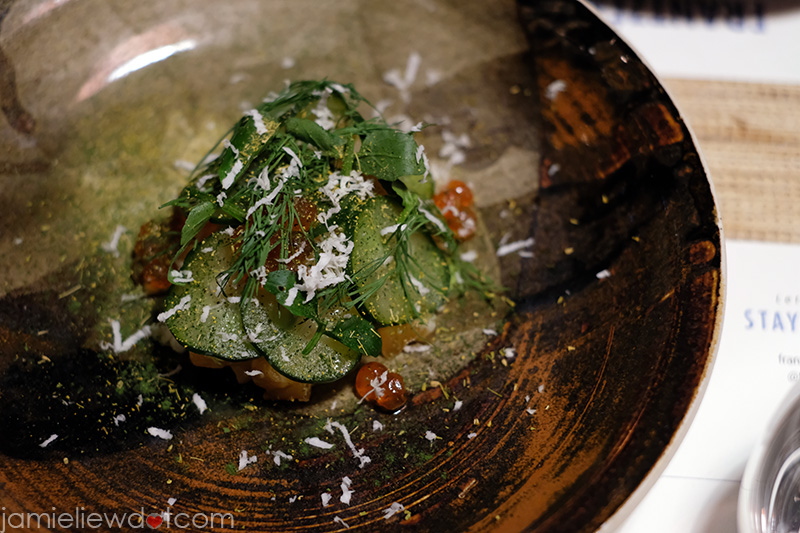 here’s another picture for the pleasure of your eyes. 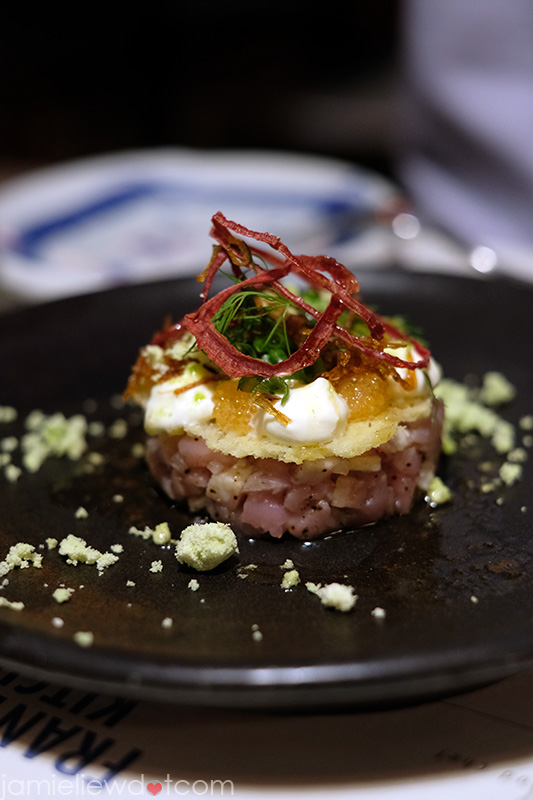 our third “to begin” is this veal tartar with smoked eel, vendace roe, chives, sour cream and shallots. at first I was like, what’s a veal?! then I learned it’s the meat of a baby cow. this is probably one of the better steak tartars I’ve had. it was very fresh, the portion was small but not like one bite worth. the veal definitely tasted different compared to a full grown cow in the sense that it has a slight crunch to it. another dish that screams Sweden and it was really refreshing. this definitely went very well with white wine (rather than red) for me. 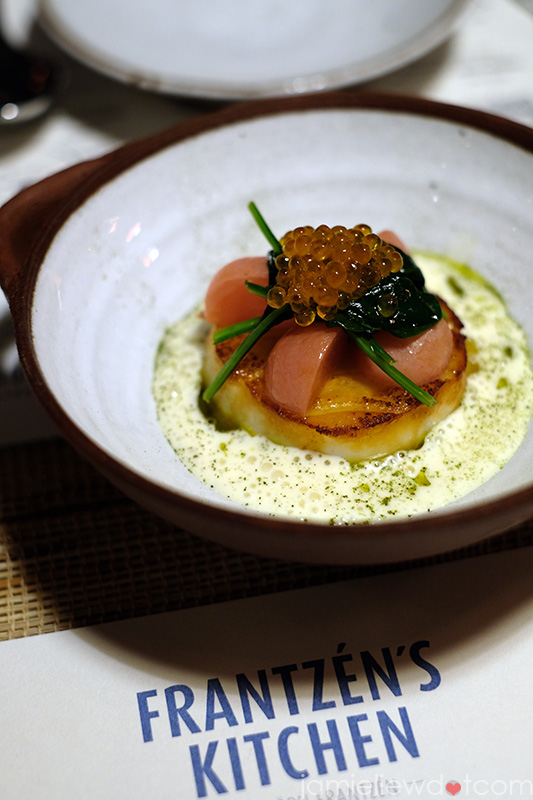 and finally, moving onto the “continued” we have Skrei. goat cheese flavoured beurre, rosemary, spinach (ew), trout roe, pickled turnip and seasweed oil. as small as this cod is, it’s actually the most “filling.” the reason for the quotation marks is because the goat cheese flavour made the cream and dish extra heavy and although the cod and turnip were light, this felt like a heavy dish. I am not a fan of the turnip but the cod went really well with the goats cheese. however, this dish is only delicious on the first bite. a dish which I thought was finally good to be as its current size. 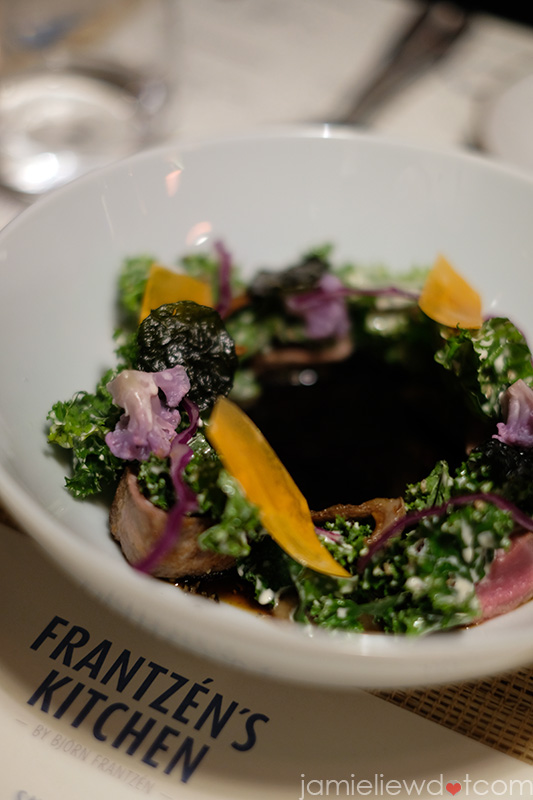 last but not least, we have every Hong Konger’s favourite; “hot-pot” which ain’t really a hot pot. it consists of Te Mana lamb, cabbage, cauliflower bouillon and truffle. this was pretty good. I am not a big fan of the variations of cabbage which were similar to grass to me. but of course because I do not love all vegetables. the lamb meat were cooked to perfection and that bouillon was a little salty like soy sauce but somehow went really well with the cabbage. 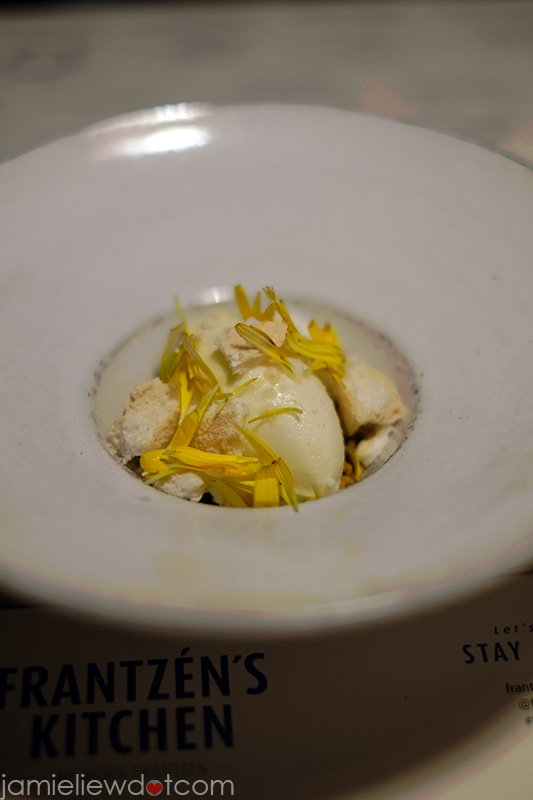 the dinner will never be completed without dessert! like what all girls say, women have another stomach for desserts. and I couldn’t agree more. this dessert is actually a thyme ice cream with tomato jam, bee pollen and birch tree oil. 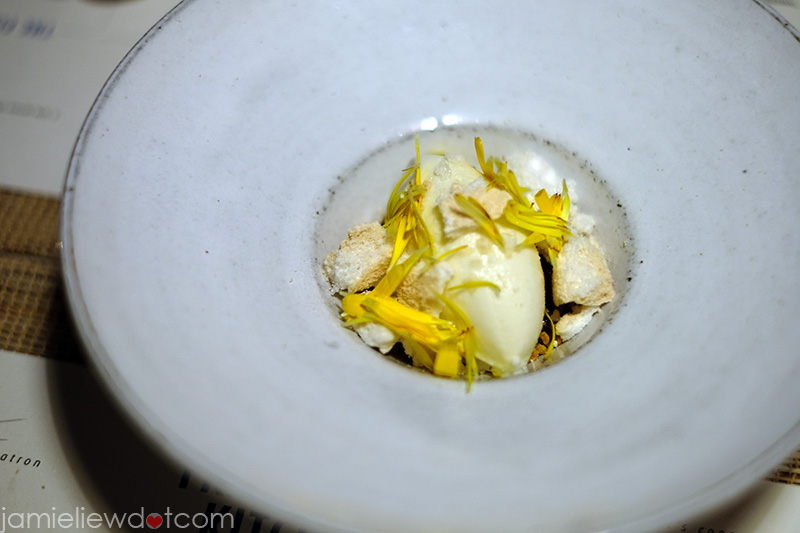 to be honest, I didn’t exactly enjoy this as much. it tasted very…….. organic. tasted like the forest somehow. the ice cream, bee’s pollen, meringue were great. but the flower petals and birch tree oil kind of made it “too special” for my liking. but then again, I cannot agree with a Swede’s tastebuds on sweet stuff. for example, kids in Sweden are obsessed with licorice, but that is something I cannot even swallow. it literally tastes worst than medicine to me. 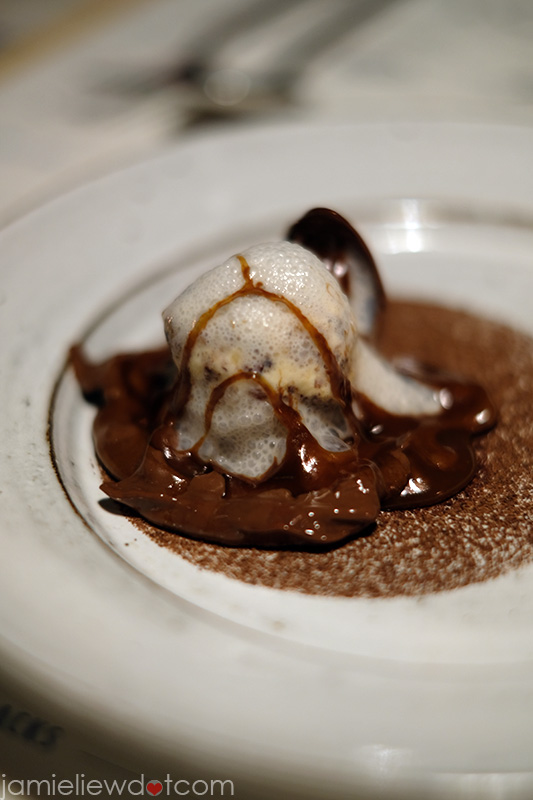 but thankfully, this smoked ice cream “3.0” was super yummy. I didn’t manage to get a before picture but it was a done them they poured hot fudge on it and it melted. you get the drill. it’s served with toasted hickory pecan nuts, tar syrup and salted fudge with cloves. the ice cream was on point. creamy, chocolatey, that foam gabe it so much texture and taste in a way which is just amazing. I enjoy food with foam on it. including beer. and also all kind of foam dishes chef’s create. something about the foam which makes the flavours even more alive. perhaps because it’s mixed with air. who knows. the toasted beady stuff at the side though tasted really special. I guess special is a great word to describe Nordic fine dining. 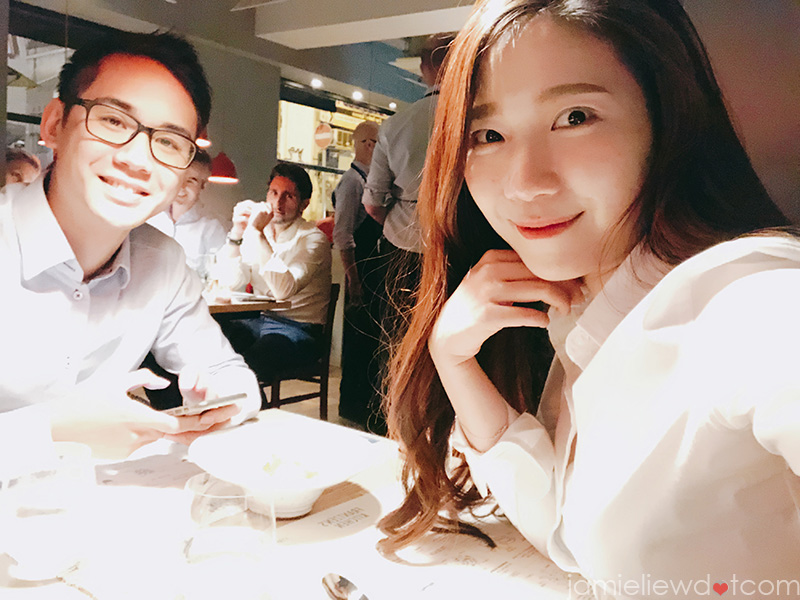 with my Swede boy! (we are both in work clothes because we went there right after work lol) 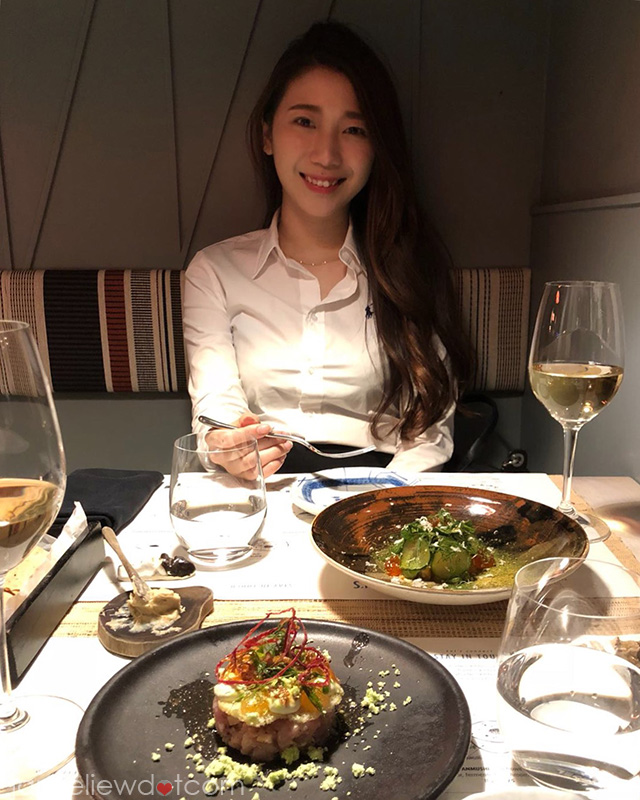 now that is one good meal!

VERDICT: very satisfying but one (or two) complains will be.. they should either make the portion bigger or lower down their price significantly. I understand that perhaps good food deserves an extra buck or two, but I just couldn’t justify it with such tiny portions. my Nordic colleague had always wanted to try it but didn’t because she herself feel like small portions does not remind her of home where portions were always LAGOM (just right in Swedish). I truly felt that it was very overpriced as it costed over 1000HKD per person and I barely felt full. I guess it’s only somewhere I would return if earn big bucks in the future. thank you boyfriend for the luxurious birthday dinner. but let’s have something more filling and economical next time. great meal nevertheless. the restaurant was fully booked when we went so be sure to make a reservation in advance if you are planning to try it out to avoid disappointment. the restaurant is located at quite a steep slope!

hope you enjoyed this post and until next time!

Welcome back~!
We miss your posts Jamie! Perhaps another one on your everyday experiences in Hongkong? hehehe