sorry for the lack of updates even though it has only been 2 days. hahaha. initially I thought I could blog everyday since I am so free here. but because of Yonsei’s high standard (and also because many students have said that the gap between level 2 and 3 is really huge) I am now studying at least for a few hours a day.

as for yesterday, I spent most of a time taking a reader, Twiss, around ^^. I swear I walked more than 10km. maybe around 15km? although we only went to places walking distance from my place, it takes about 20 minutes to walk to Edae and about 30-40minutes to Hongdae as well. I guess it’s still walkable at this cold weather. but if you’re talking about SUMMER……. mal-do-an-dwe. it means, it’s impossible.

the first day. I hadn’t exactly made any friends because I was shy (now you must be thinking “YEAH RIGHT.”) and I am still very very uncomfortable with speaking in Korean. I only talked to the two sitting beside me and smiled to the rest. during break time everyone did their own stuff and when school is done everyone gets out of the class quickly before I can even approach any of them U_______U. I had sundubu jjigae ALONE on the first day but it wasn’t that bad as there was this REALLY REALLY nice Japanese girl named Tomoyo (? I have the worst memory with names.) who talked to me and we spent a lottttt of time talking. she’s in level 2 and she still have a very heavy Japanese accent but its 101% cute. not to mention, she’s also very very pretty. and because level 3’s book is so darn difficult I cannot help but to panic and as soon as I came back to my room I started studying until… 10pm? very hardworking.

on the second day, everybody started opening up and even the teachers thought so =D. it was pretty nice as everyone talked to each other. and on that day I’ve already made friends with all my classmates ^______^. I have 4 Japanese classmates, 1 Turkish, 2 China Chinese, 1 Mongolian, 1 Zimbabwe-ian, 1 Vietnamese, 1 Austrian Korean and a new American whom I think is Korean. but he came on the 3rd day so I hadn’t had the chance to question him hehehe. and I think that one of the Chinese guy in my class REALLY look like an older version of Minho from Shinee. I hoped so much that there would be a Thai that look like Nichkhun in my class hahaha. too bad for me T___T. no eye candy wuwuwuuwu. then I quickly get back to my house to put down my books and went to meet up with Twiss. it was quite nice being a tour guide and.. finally the only one who knows Korean so I had no choice but to utilize my poor skills.

as for today, the third day I finally met up with Margeretti (friend I made since the placement test) for lunch and she introduced me to another 4. studied and did my homework until 6pm(others don’t study because they are already like really pro. they are either weaker in speaking or writing I guess that’s why they are in the same level as me. but understanding, most of them are REALLY GOOD. and they have a heck of a memory. like, instantly memorize words wth I need to listen to the same word a few times and USE it in order to remember it =S. after that few hours of studying (and fb-ing) I went for dinner and later went out for ice-cream while having my friend teach me some of the Korean phrases where I understand all the words in it but can’t figure out why the sentence is like that. Korean have a very different sentence structure compared to English and Chinese. so……. =S. anyway! I registered for this day trip to somewhere in the middle of South Korea for some ox fighting competition =D. I’ve read it online before so I thought it would be a very good chance since it’s free =DDDDDD.

there are actually a few things that I hoped for before coming here and that is to become slimmer since I walk so much everyday and also to get better skin since water here are muchhhhhhhhh cleaner than that of KL. well… I think instead of becoming skinnier I maintained my fat body but maybe I’d be a little heavier because I can feel the muscles forming on my legs T_______T. and you wouldn’t believe how dusty Seoul is. try walking outside for a few hours then wipe your face with a tissue. it would be the shock of your life. =D. sides, I have so little time to do everything I want to do, I only sleep for approximately 6 hours a day. and that is turning me into a zombie with the noticeable dark eye circles and deep eyebags. =S. I gave myself a shock when I came back and looked at myself in the mirror =S.

feels weird that there is no pictures on my post. so here’s one. and also its what I am gonna blog about next. =D. 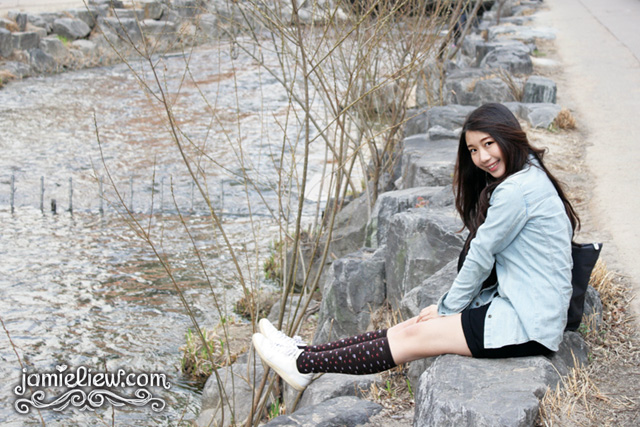 It never occur to me Seoul is very dusty, will try to wipe my face the next time I’m there. lol~

I know what u mean with the dusty air.. T_T Anyway, I am SURE you will lose weight when the weather turns warmer. 🙂 Cold weather makes ur body automatically store fats!

hyep , jamie !
which university are you currently study ?

DID YOUR KOREAN IMPROVE FAST. I’M GOING TO LEARN HERE THIS FALL