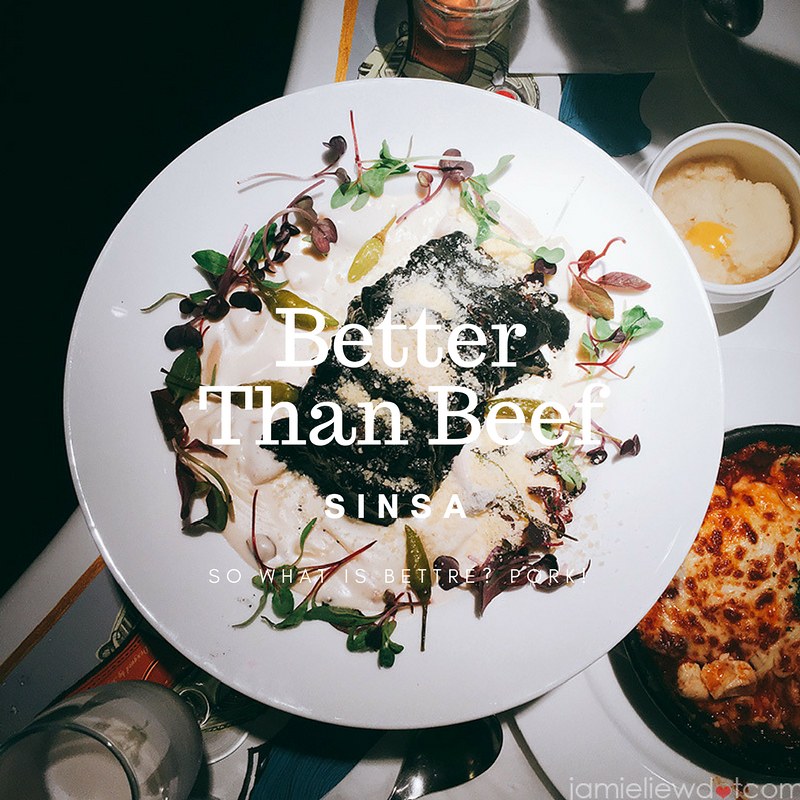 so what is better than beef you ask? I have always walked pass this shop and was very intrigued by its sign and when I checked the menu, it’s actually pork that’s cooked so well that the restaurant owners claim it to taste better than beef. went to this Alice in the Wonderland themed restaurant twice and I would like to confirm that yes, it’s a chick’s place. but a very beautiful chick’s place. 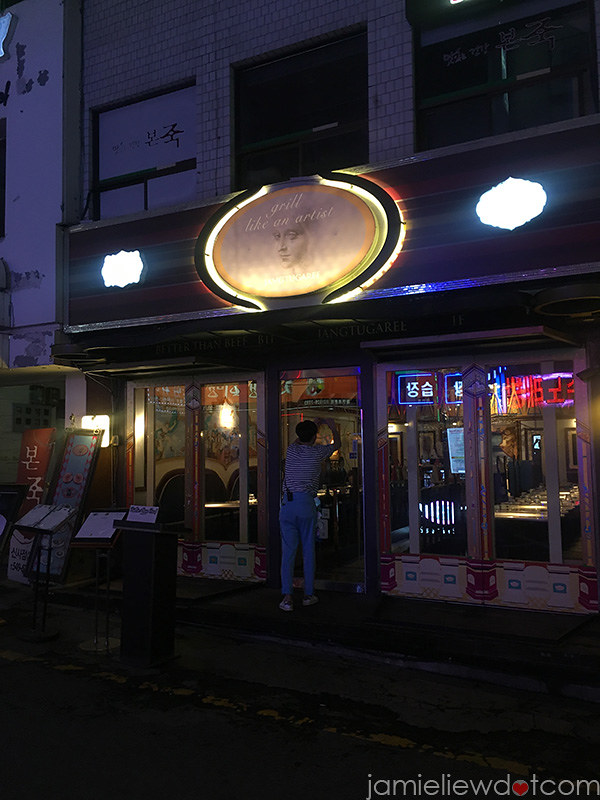 the exterior. they were closing at that time (forgot to take a picture of the front so I went back really late haha.) it doesn’t look that big but the underground area was really huge so I guess no worries if you didn’t make a booking. you can’t book after 7pm anyways. 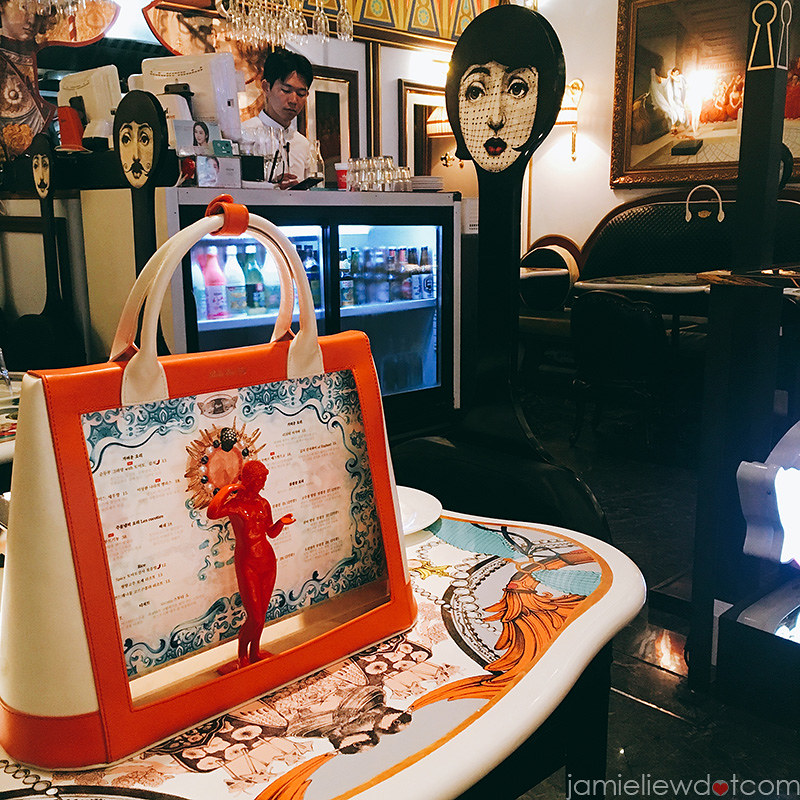 the whole restaurant is really wacky. you’d have wacky chairs, handbag sofas and even the menu is like a handbag. 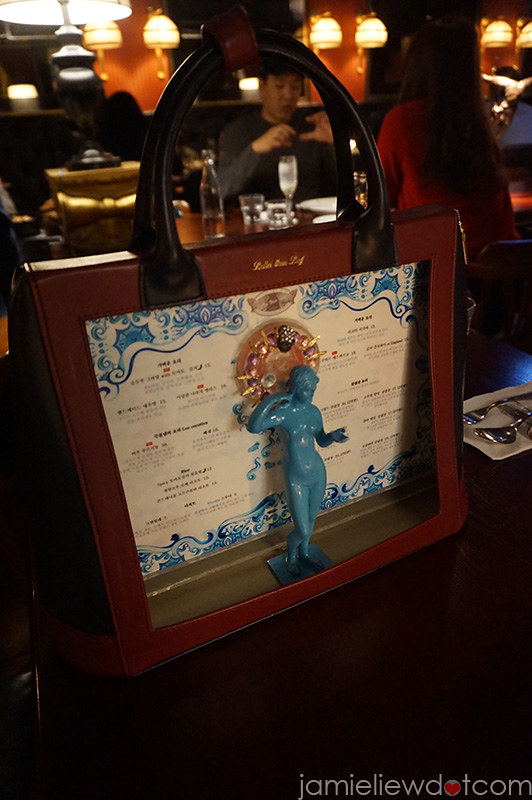 and that doll in the middle’s just.. very extra. the prices of this restaurant is definitely not on the cheaper side. it would cost around 20-30k per person on average. 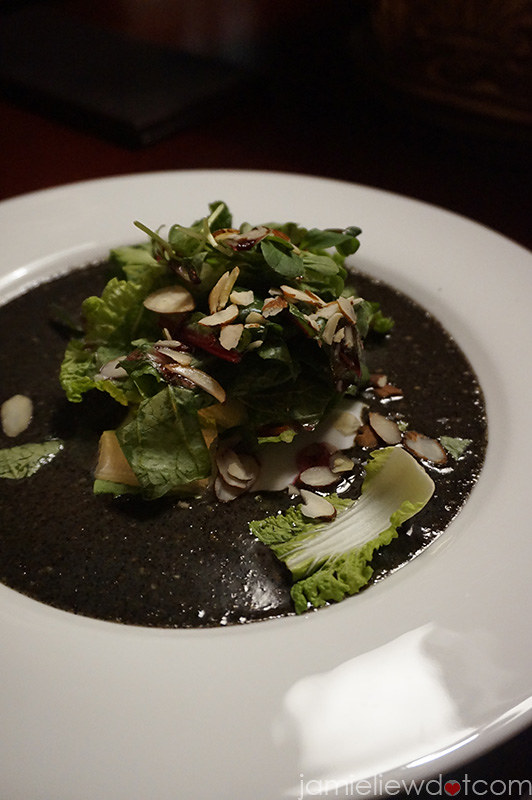 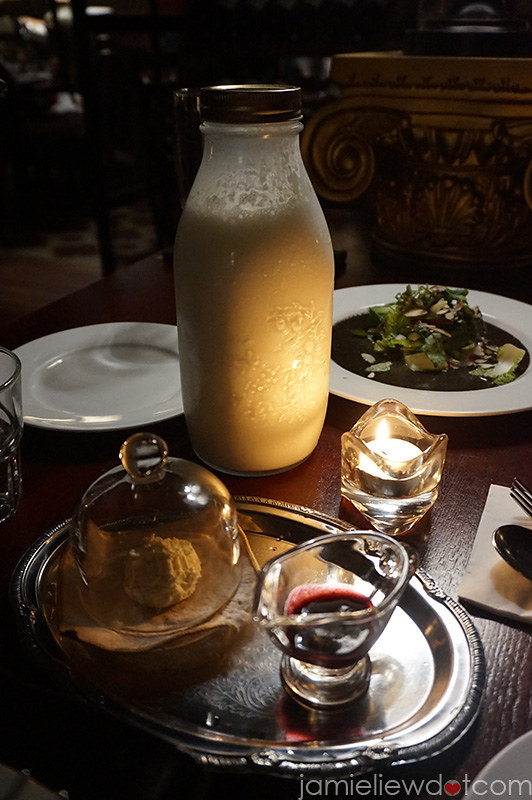 and what made me go back to this place is ironically not the pork, but this: the magical creamy cream cheese rice wine. or cream cheese makgeolli. I would highly recommend to come here just for this drink if you’re a huge makgeolli fan like myself. friends I went with were not fans of makgeolli but they became one after this one. 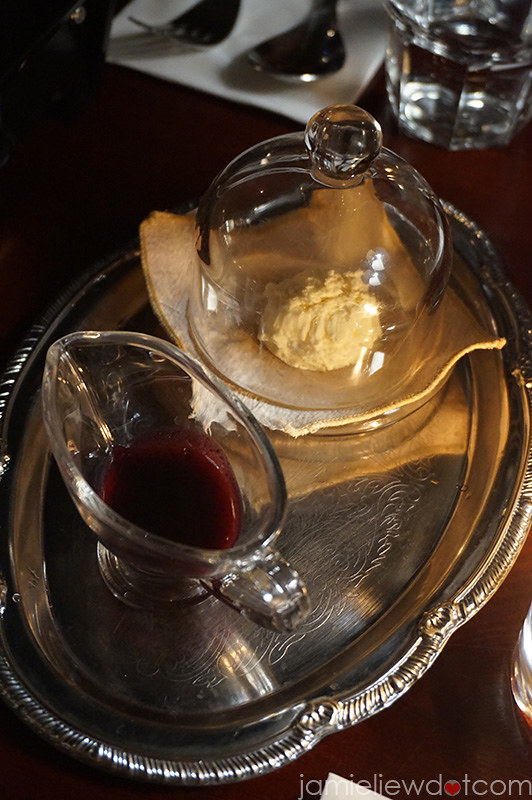 served with the cream cheese makgeolli as a set is this ball of ricotta cheese which goes ridiculously well together with the blueberry sauce. 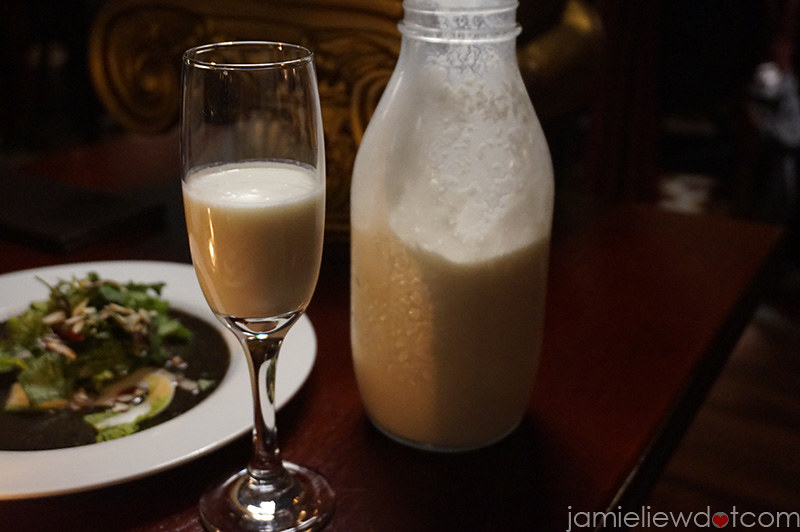 and best thing is, they serve their makgeolli here with champagne glasses! makes everything look extra classy haha. 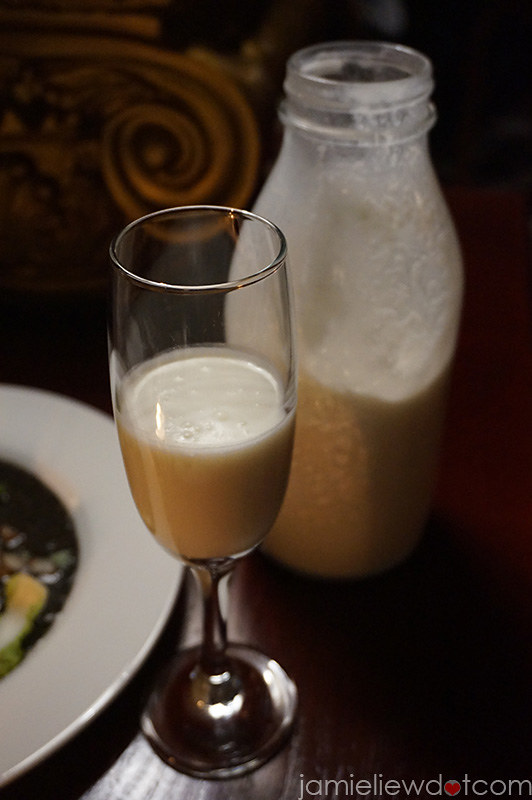 cream cheese makgeolli set at 15,000won. the creaminess and cheesiness from the cream cheese makes the makgeolli much more fragrant and easy to drink. it’s really really good. not to mention they have 20 different kinds of makgeolli so I really hope I can just try them all! (they even have blueberry makgeolli served in a super wacky cylinder shaped bottle. 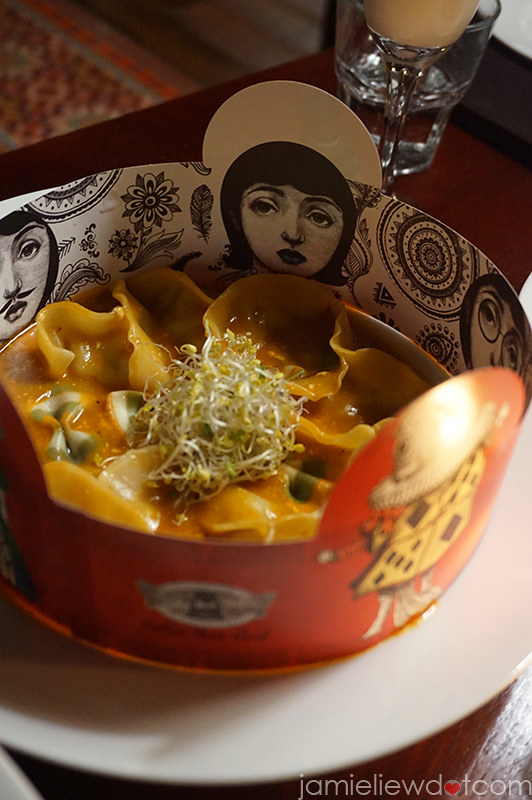 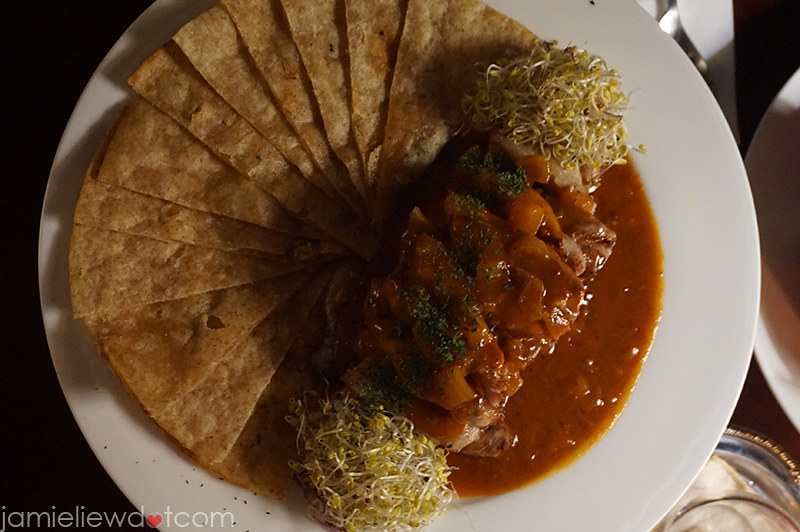 the 오감만족 삼겹살 or in literal translation, the samgyupsal that satisfies all 5 tastes (sweet, sour, salty, bitter, spicy) all for 29,000won (portion for 2 it said. but too little imo lol). I always leave the “bitter” away. hahaha. that’s gonna be the yellow stuff on the side. 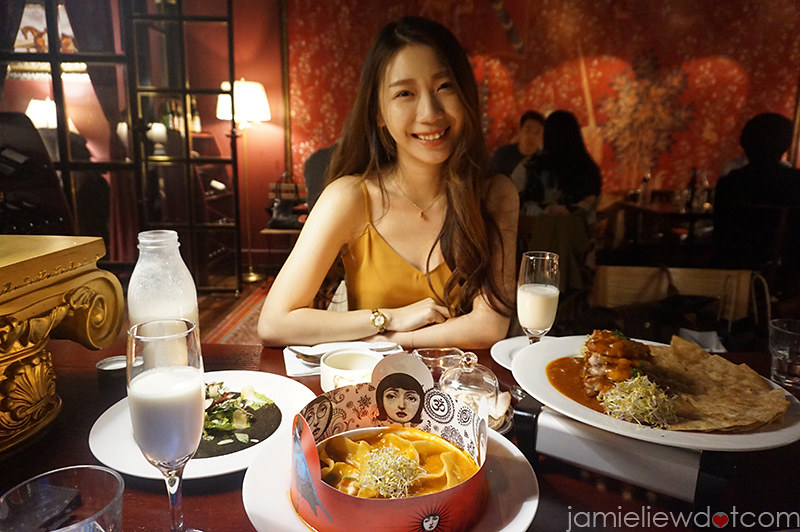 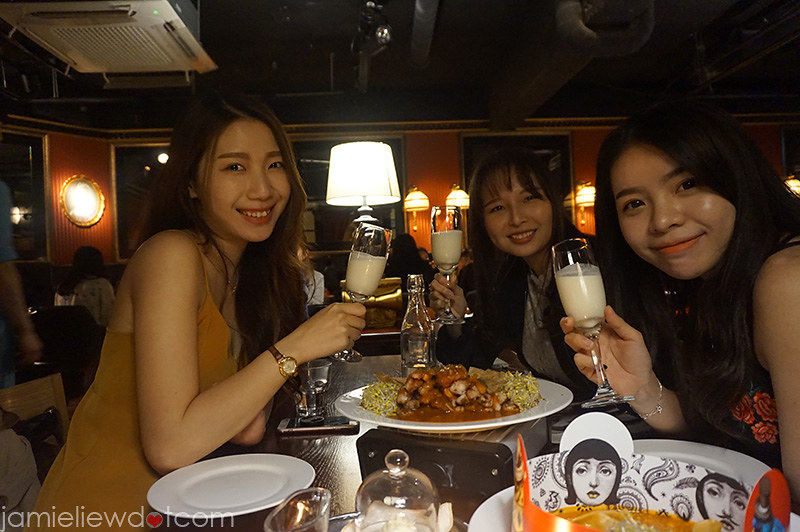 it was actually my pre-birthday celebration with these two lovely girls; Vinny and Erna (please stalk Erna’s youtube channel at Erna Limdaugh) 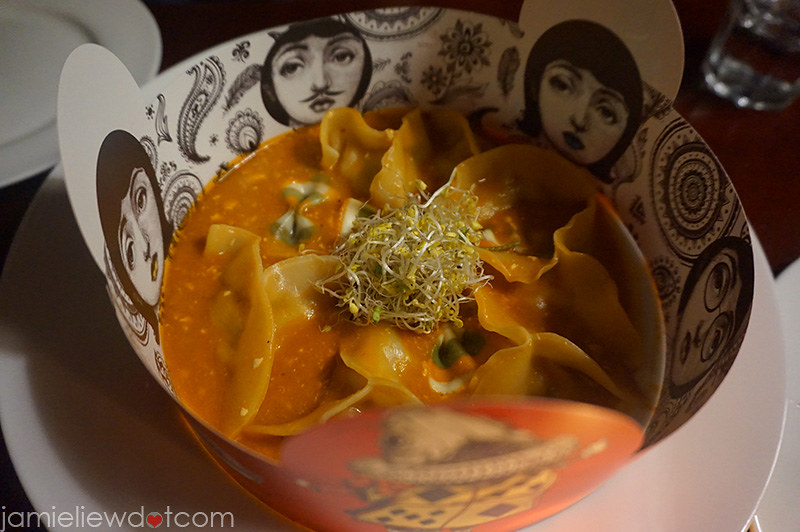 I think this was everyone’s least favourite but my absolute favourite. I think it’s because it scored 10 points in everything from presentation to taste but only lacking in.. price. very very pricey for only just 6 lobster dumplings. but it’s lobster so.. haha. but that sauce though was so creamy and lobsterish that… 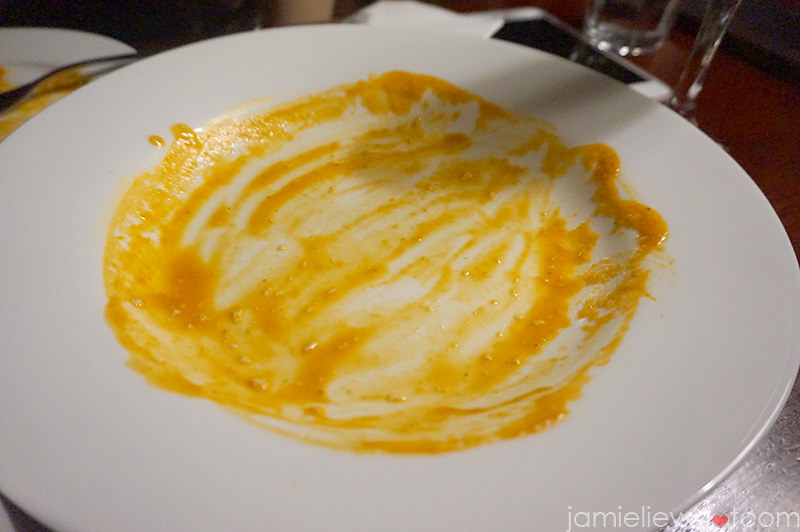 we finished as much as we could. 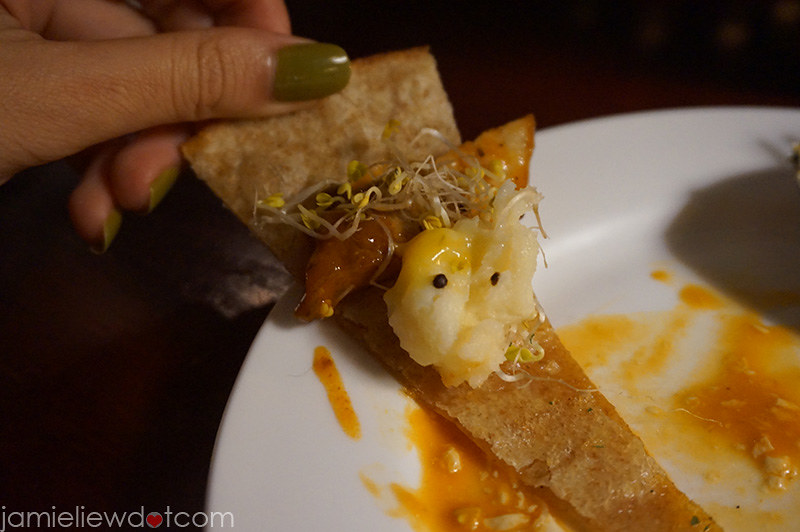 as for the 5 taste pork belly dish, I guess this is how you eat it. wrap everything into the dough which is similar to a crispier version of roti canai to me. 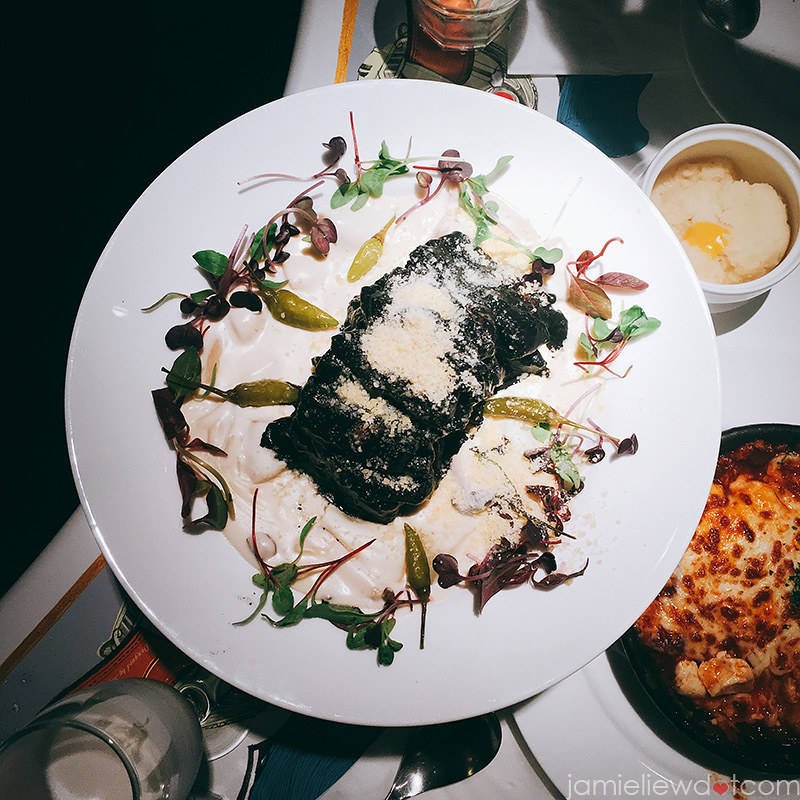 so I went there for the second time because I couldn’t forget that awesome cream cheese makgeolli. and this time we ordered the “dark knight” (29,000won) which is samgyupsal drenched in squid ink (salty) sauce topped with some cheese and laid on a bed of cream sauce. it was weirdly delicious. but not going to order this again. next to it is the shop’s famous “Sundubu Gratin with kimchi and tomato” (13,000won) which was whack. it tasted like a more concentrated sundubu strew topped with a lot of cheese and torched. nope. nopeee. but Koreans seem to love it. something that Koreans love which I don’t haha. (another thing’s a heap of garlic. I like it moderate haha.)

VERDICT: I loved the interior and the wacky drinks. but I felt like food was definitely a little over-priced. would still come back for the makgeolli and the lobster dumplings though!

In which date we went in restaurant together.

Olah Jamie!
I wish to read about your graduation story soon! Hehehe
If you are willing to disclose something about it! Congratulations! Welcome to the adult world!

Would like to read on updates on your personal life, updates on being in korea for so long, future plans etc.. Theres too much food reviews its getting boring