so on Day 2, we rented a car at night and had it parked at the mall where we rented the car (it was free of charge if you tell the company you want to have it parked there!) which was next to the ferry peer. since Megu had to take an evening flight on the 3rd day, we started our journey from 4:30am!

the sun rose really early in summer and the skies were just spectacular. 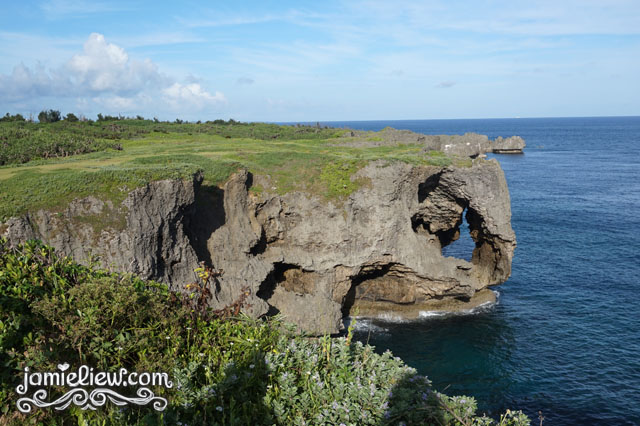 our first stop: Manzamo.
estimated time spent here: 40minutes
time to get here from Naha: 1hour 30minutes – 2hours (we drove really slow and even took the wrong road so..) 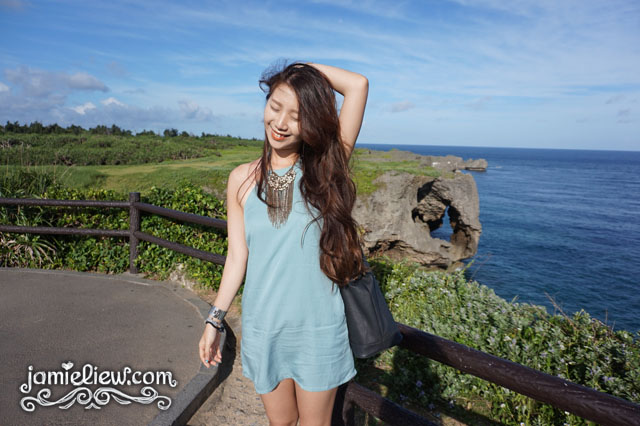 arriving here at 7am, the whole area was clear and there were only another pair of tourists! plus, the weather’s also beautiful with the best morning sun being not too hot on the skin (unlike in the afternoon haha) 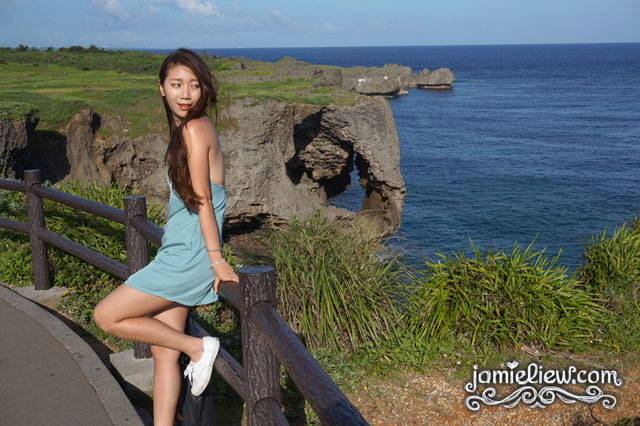 after coming back from Zamami, I literally got 50 shades darker hahahaha. I went snorkeling so the back of my body was completely tan and sunburnt 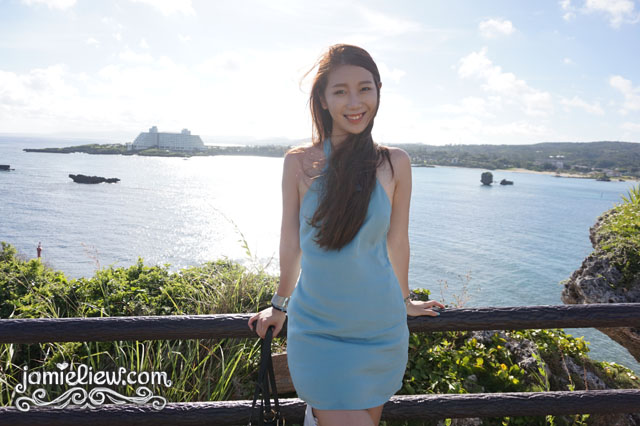 the view overlooking the famous hotel where HyunA filmed her famous song “bubble pop” and that two stones tied together looked pretty awesome too! 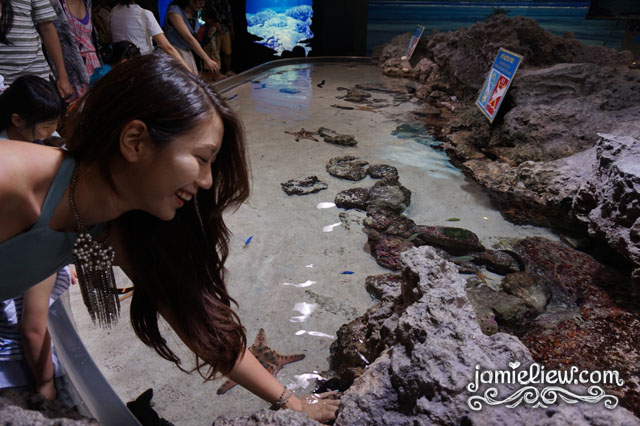 our second stop: Churaumi Aquarium
estimated time spent: 1hour 30minutes – 2 hours
entrance fee: somewhere around 1600yen because we bought it at the car rental place for a discount.
time to get here from Manzamo: 1 hour. the drive was amazing, it was by the coast and the crystal clear and blue sea just makes you feel really really happy. 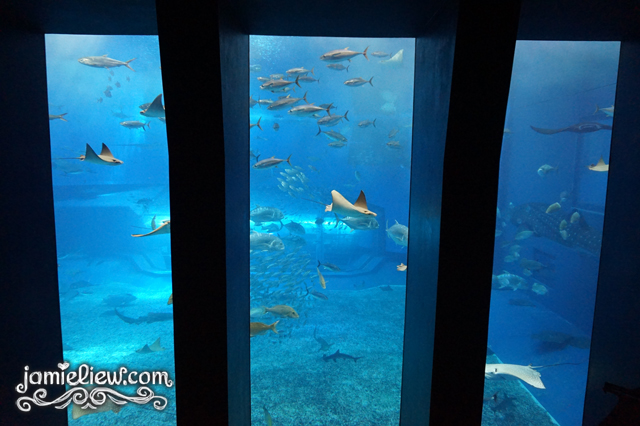 while there are a lot of different species of fishes, jelly fishes and other sea creatures, I think what makes Japan’s aquariums really worth a visit is that they try to make things as educational as possible. easy to understand and full of experiences (like touching the skin of different sharks!!! and also their teeth!!). however, what people really come to Churaumi aquarium is for this. the huge world class tank which was.. spectacular to the eye. 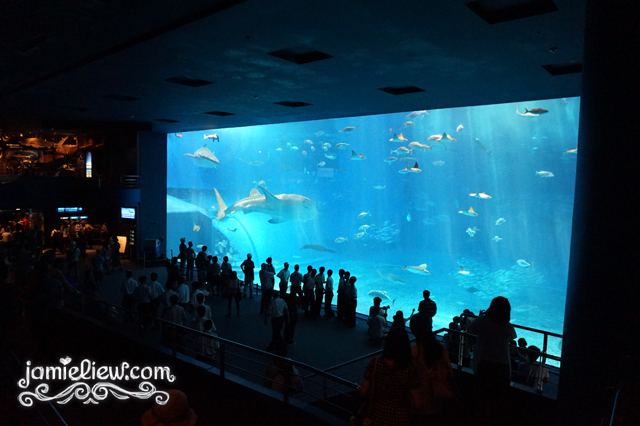 it was like a huge LCD screen but.. except it wasn’t. the fishes in there are real. and they are so beautiful, so graceful, so wonderful D=!!! it was smaller than what I expect but.. I mean look at this! 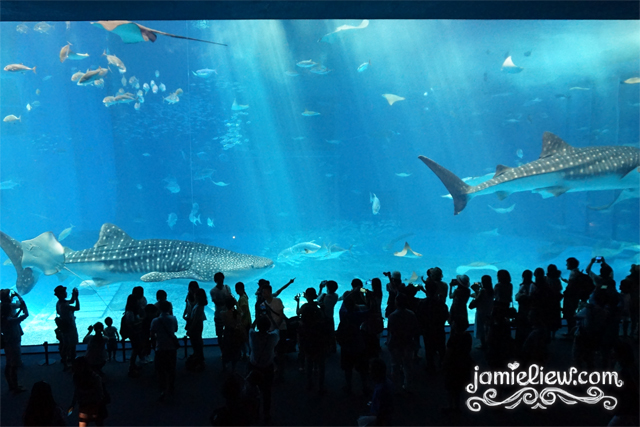 there are 3 whale sharks inside and they keep swimming in circle and if you wait long enough and snap it at the right timing, you can even get all 3 of them in 1 shot! I left my DSLR in Malaysia so I don’t have that picture but anyways! enjoy the pictures from my compact camera ^^. 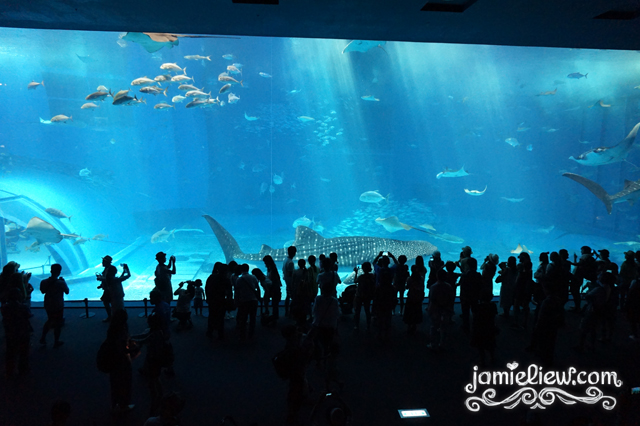 what you see here is definitely lacking very much compared to seeing it in real life. I think I spent 20minutes here just gawking at the huge aquarium. 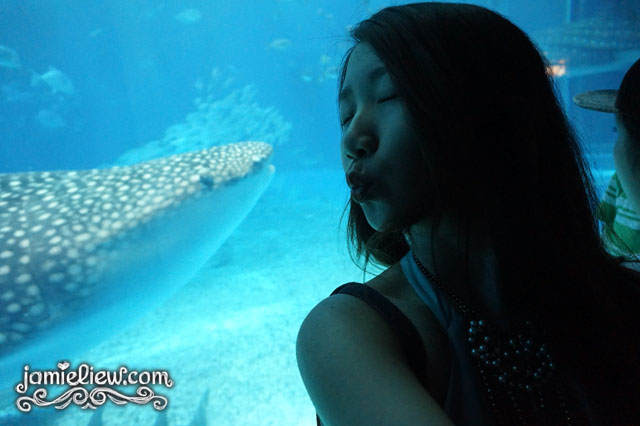 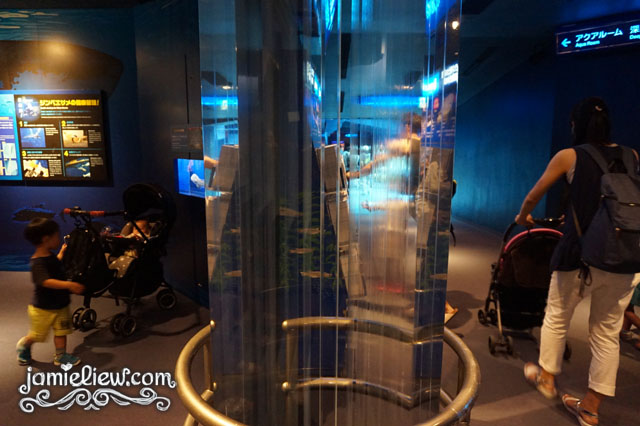 the thickness of the glass used to sustain that crazy amount of water in that giant tank. 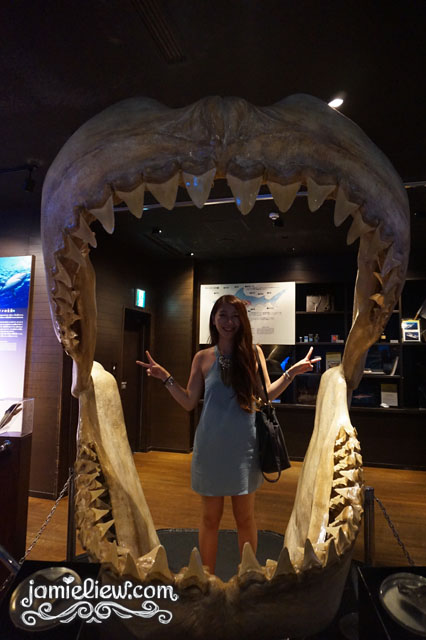 so how big are the biggest sharks in the world? well.. if their mouth is this big… and oh! an interesting fact I learned from the aquarium. sharks have layers of teeth because.. once the ones outside falls off, the ones behind will replace it. it’s like the most efficient teeth on urf D=. 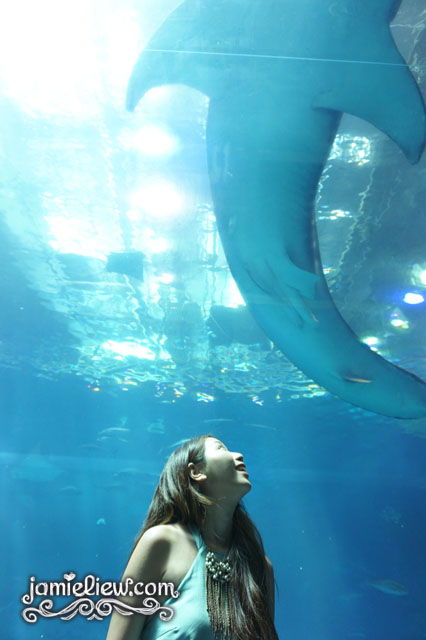 not really supposed to stare at it there but.. oh well.. just wanted to show you how close I was to a shark. they were just swimming all across and above! 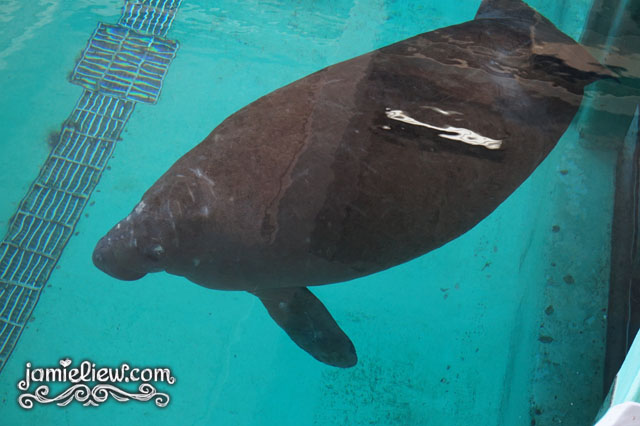 now this is one huge mammal. it’s quite weird how it’s located outside of the aquarium at the area where you do not actually need to purchase a ticket to see. 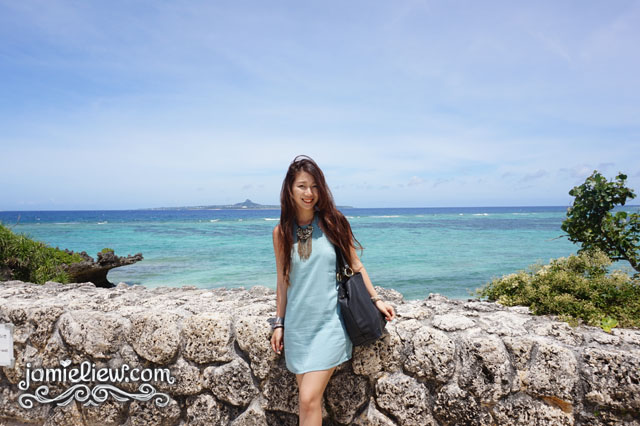 right outside the aquarium, you’ll see a sea with many shades of blue. ahhhhh so pretty. 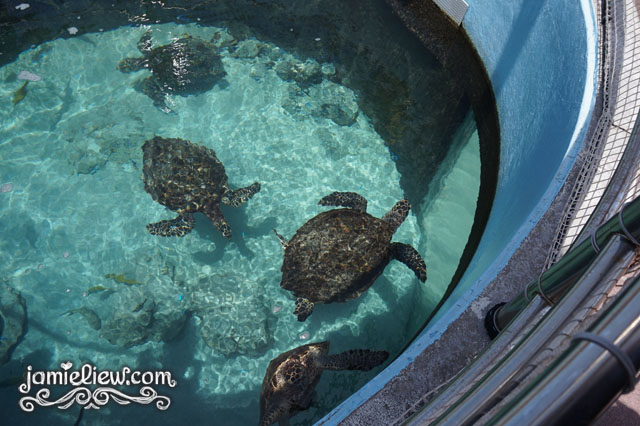 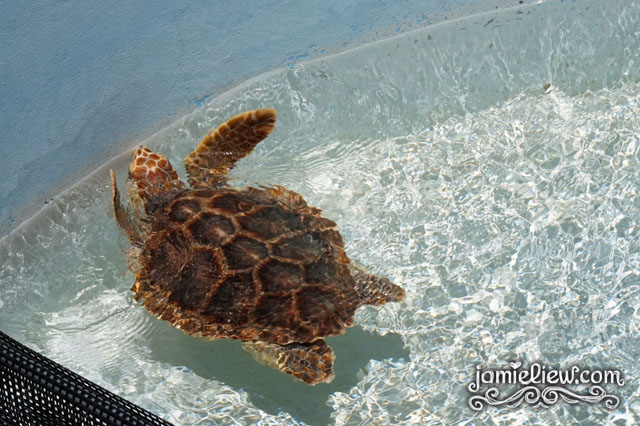 they are so cute xD. 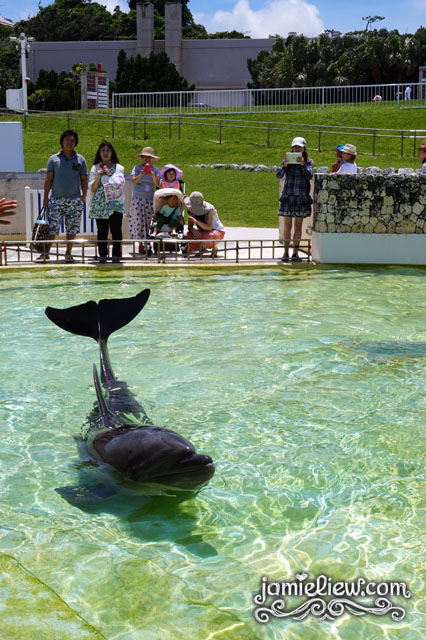 I was just passing by and it was time for the dolphin show! they have only 2-3 shows per day so I guess I was just lucky. I was trying to escape that heat because of my sun burn but.. I stopped for a bit to see this. 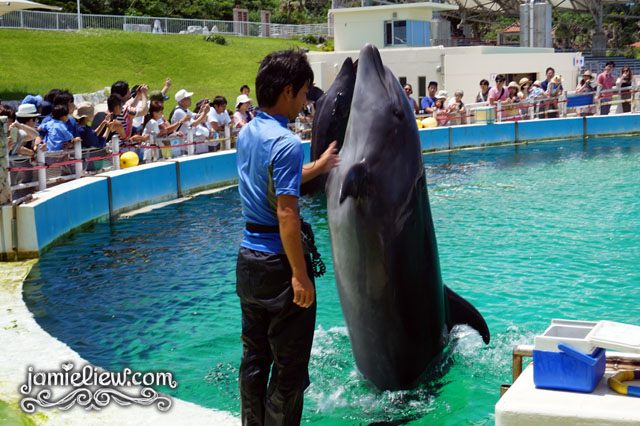 I remembered touching the dolphins and looking at its tired eyes. it was actually quite cruel to have them stay at one corner and not move. many also debated about how these shows are against animal rights. but I am not taking sides. as much as I loved to see how smart they were, I just hope that they can at least get fed well and not abused by their trainers. 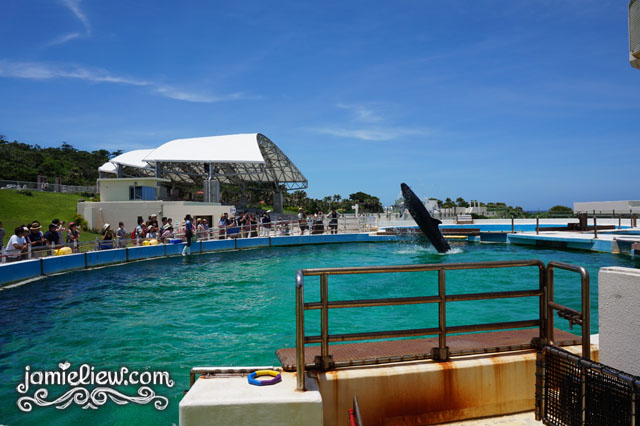 the show was a short one but it was really fun and the dolphins did go against them but they kept trying by luring them with more fishes. simple but worth while =D. 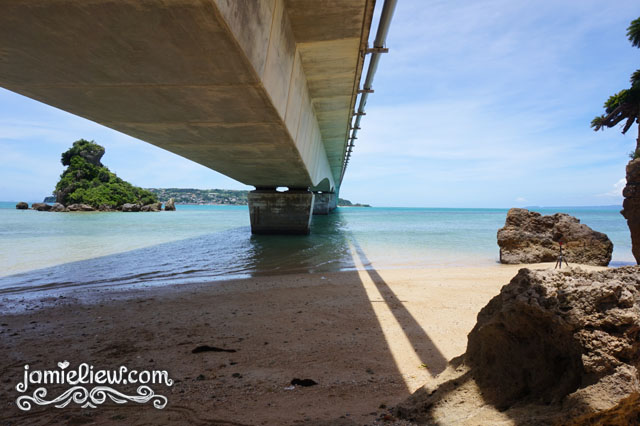 our third stop: Kouri Bridge
time taken to get there from Churaumi aquarium: less than 30 minutes.
estimated time spent here: less than 30minutes

many Koreans come here for their mini couple photoshoot and it was indeed beautiful but it is just a short stretch. so you don’t need to spend a lot of time here. depending on how many pictures you want to take of course. haha. there’s nothing much to do. there’s a horse and also a truck for drinks. that’s about it. 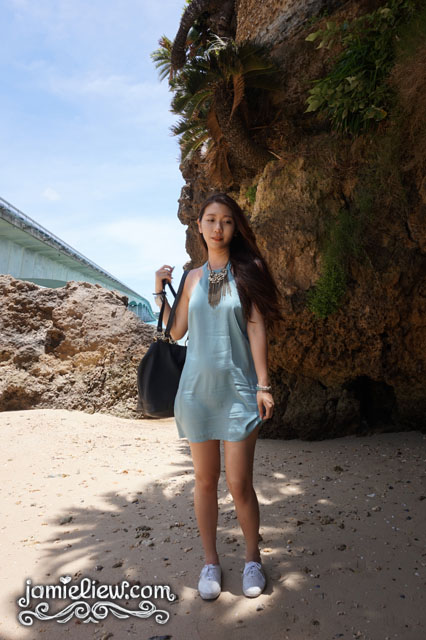 however, that stone at the side with a lot of tropical trees growing out of it is really something. =D.

before leaving back for Naha so that Megu could catch her flight, we went to a beautiful cafe smacked at the center of that area which is only accessible by car. will blog about it next!

I really have to comment on the marine turtles I saw hehehe
Those turtles are endangered species but it is sad to know that despite the fact that their number is tremendously declining countries like Japan are one of the biggest consumers of marine turtles. 🙁 :'(