with the recommendations of friends who have been to Okinawa, we squeezed Zamami into our tight schedule because many of them commented that the Kerama (Zamami is one of them) Islands are the highlight of their trip. if you could stay a day or two in Zamami, make sure you go for the turtle watching which is around early in the morning or in the evening. but since we went for a day trip (where many Japanese does too), we had to miss out on the cute little turtles =(. 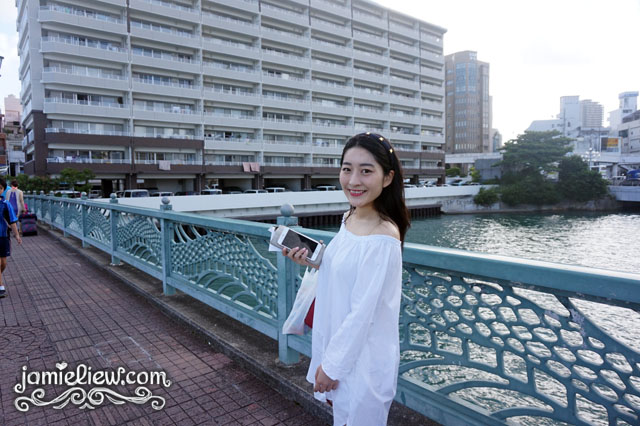 my best friend while I was in language school, Megumi. ain’t she beautiful or what? =D. 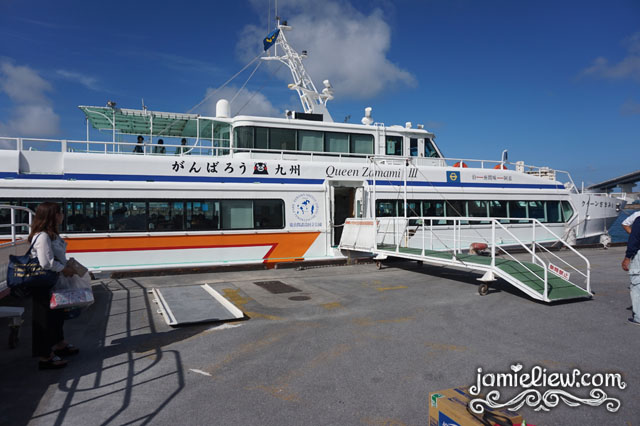 we took the comfortable Queen Zamami (with air cond!!!) which runs twice a day. it costs a hefty 6,000yen for a round trip but it is much faster and more comfortable than the normal ferry that goes to Zamami which is 2,000yen cheaper but an hour longer. the inside is pretty basic and nothing special but it was sure comfortable as we slept all the way there. and by taking the Queen Zamami, we had 8 long hours to spend in contrast to taking the ferry which will only wind the time available to be spent for a day trip in Zamami to 3 hours. ferry time changes according to season so please check the official Zamami website for the timings. 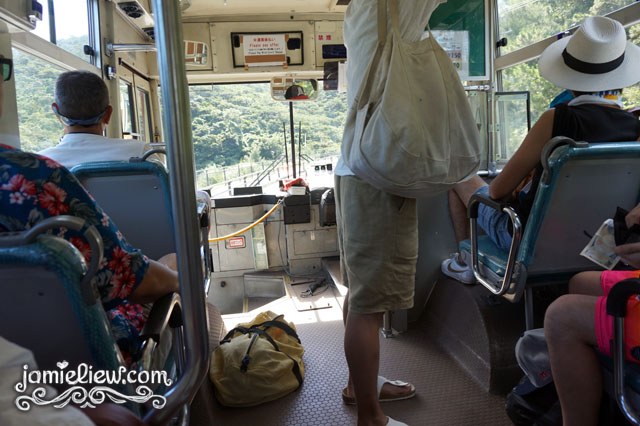 upon arrival, we took a bus to the famous Furuzamami beach which was probably a 15minute walk away from the pier. the bus costs 300yen. quite pricey for such a short trip. but it’s an island so… it seems like that’s the only bus. and it’s waiting at the pier once you get off. 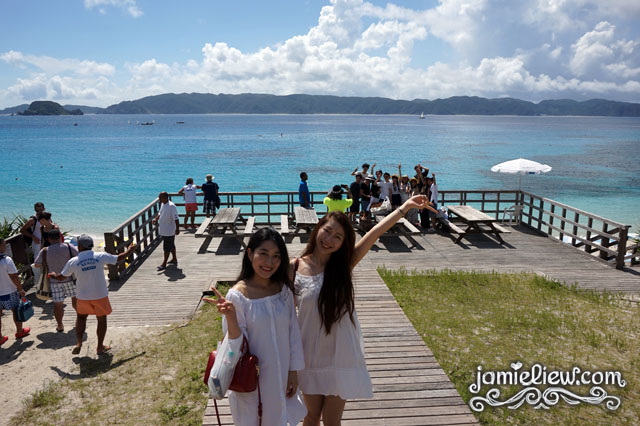 and finally! the beach!!! 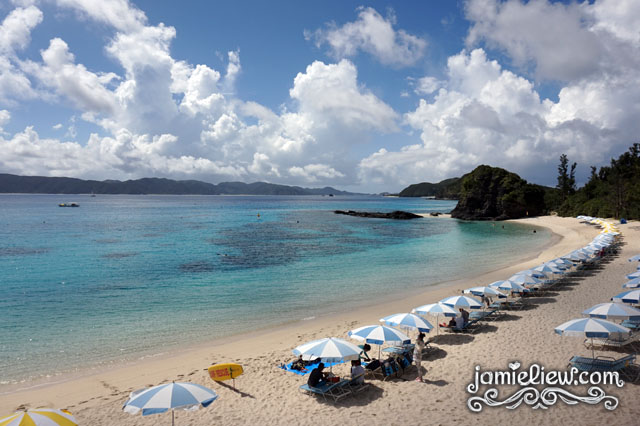 I guess we are pretty lucky as it was raining everyday but it stopped the 3 days Megumi was there with me and the weather was perfect! I guess there weren’t many people as most Japanese was telling me that the weather’s not going to be good. 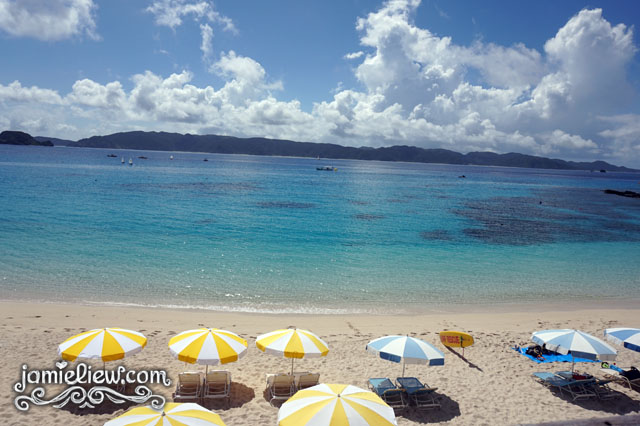 the beach was pretty empty and the chairs and umbrellas are all for rent at 1,000yen each. so for two chairs and an umbrella, it’s 3,000yen. there are no lockers available but I just put my stuff there because uh.. well I trust Japanese people. but we left our purses with the people who rented us our umbrella. 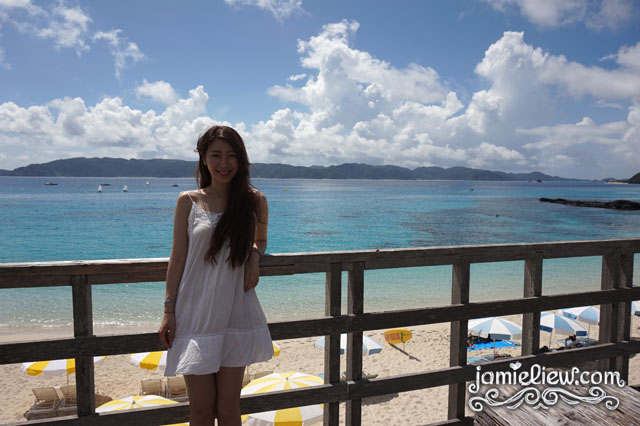 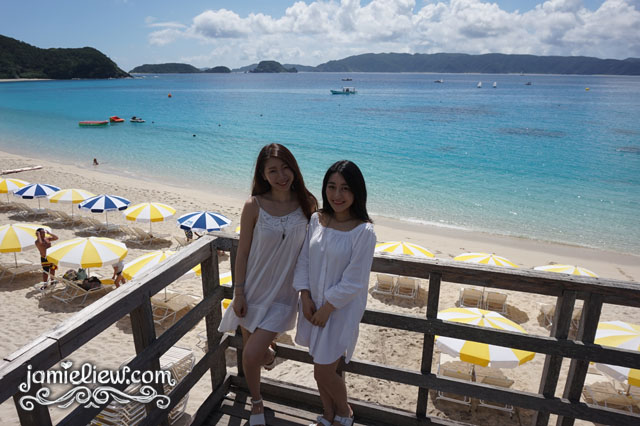 now look at that blue blue blue sea!!! so blue and so clear! 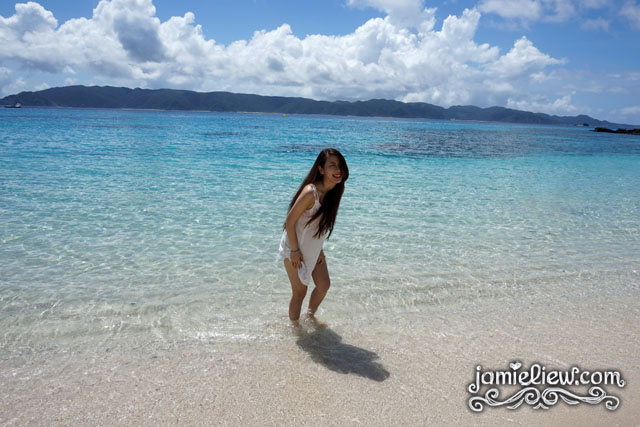 and up close.. it’s even more beautiful. most of my pictures aren’t edited so you can picture how beautiful it was in real life to look so good in pictures. 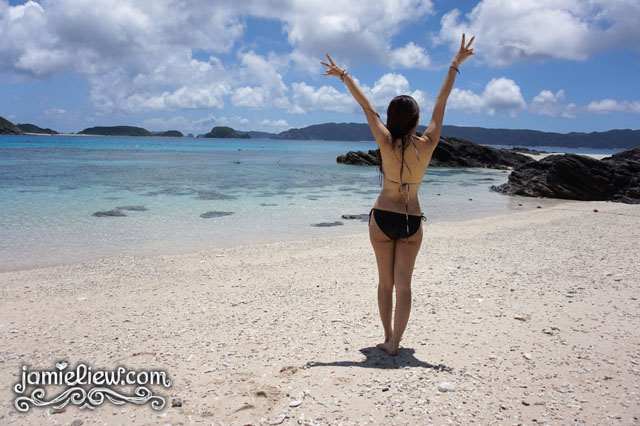 ^^v. those darker spots in the sea are corals so all you have to do is rent goggles and maybe a live jacket (if needed. I rented it anyways because I was afraid of the depth after swimming without a life jacket for 5 minutes. it was REALLY deep. at least 3 meters deep!).

also, another tip is to.. not wear a bikini like myself if you want to go snorkeling, which is dumb if you don’t because the sea here’s amazing. well you MAY wear one but please wear a shirt over it because I got bad sunburn the day after and it hurt like mad for over a week. =(. 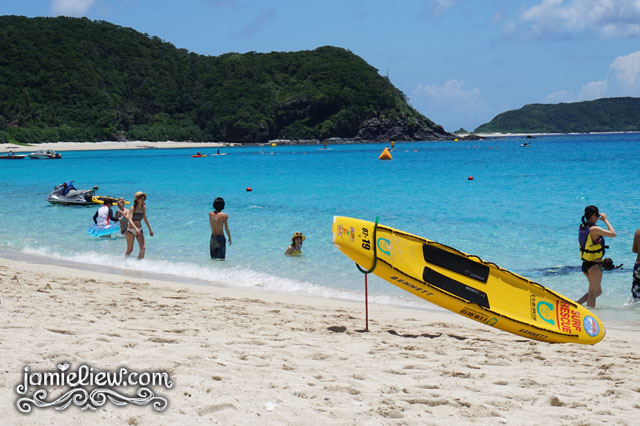 THAT BLUE SEA!!! omai. I mean, I’ve been to many beautiful beaches in my life but this was by far the prettiest one yet. 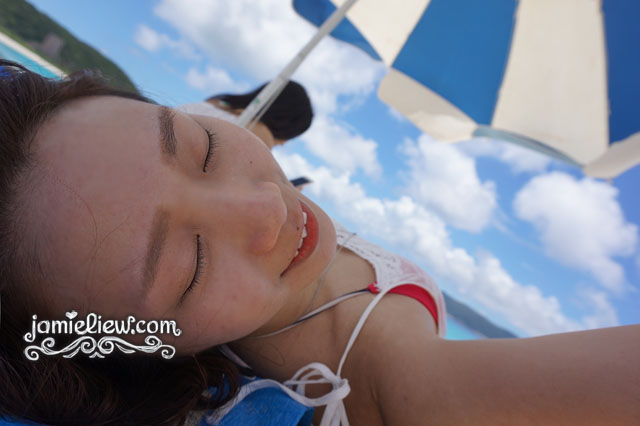 and after swimming, I just chilled. 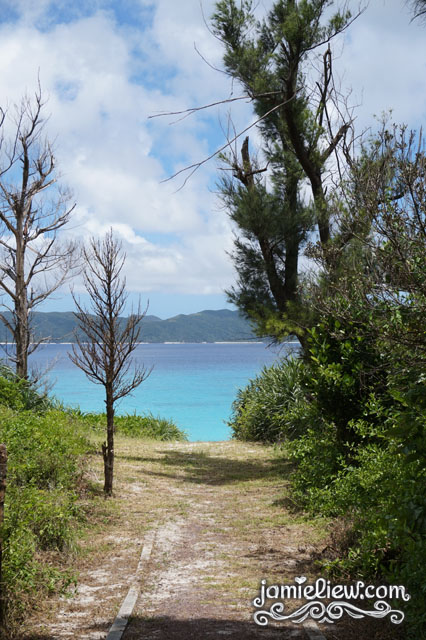 I can look at that blue sea everyday. <3. 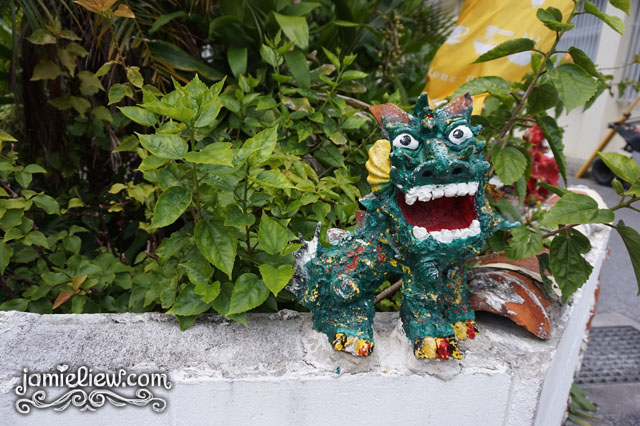 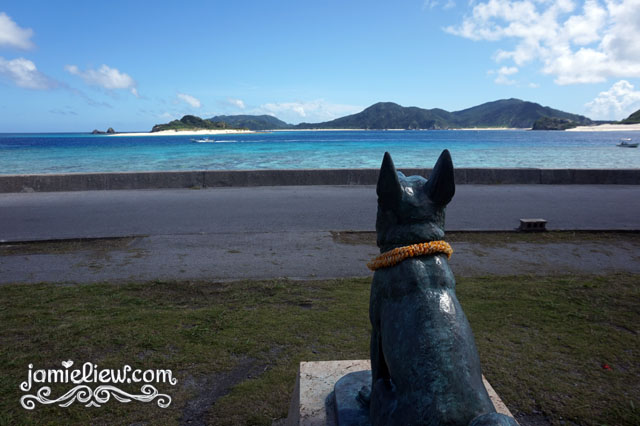 so there is a story behind this dog, Marilyn. Shiro, a dog from the opposite side of the Island named Aka, visited Zamami with his owner where he met Marilyn. but what caught everyone’s attention was when Shiro swam 3km everyday to Zamami just to meet Marilyn. very touching. ngaw these Japanese dogs. more reasons to SAY NO TO DOG MEAT! 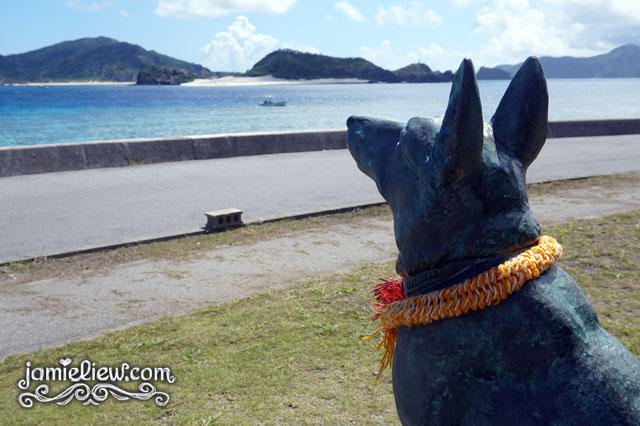 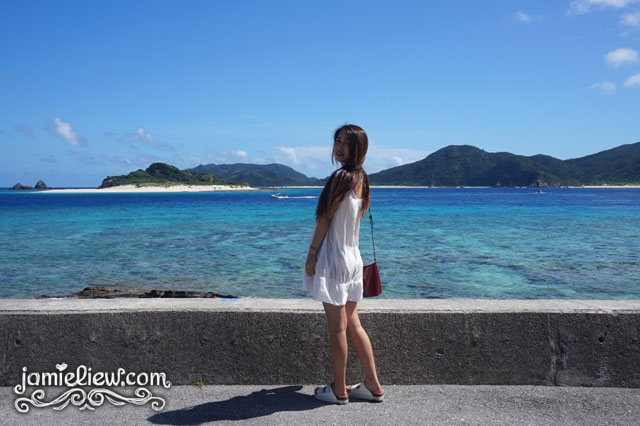 and the sea in front of the statue was simply stunning. 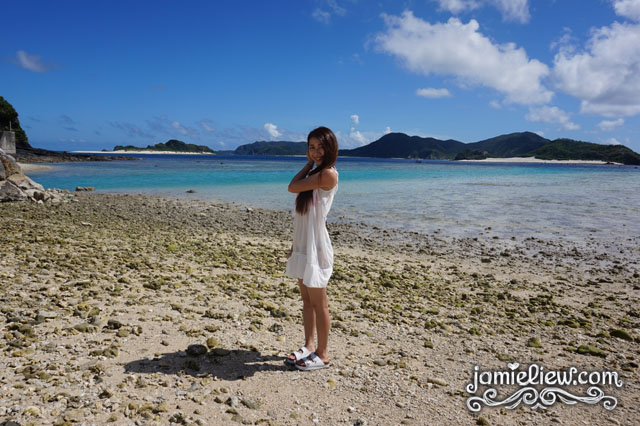 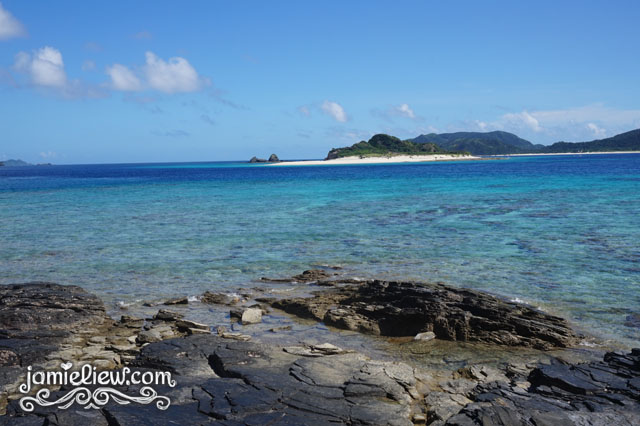 if you look in real life, you’d see several layers of blue in the sea. 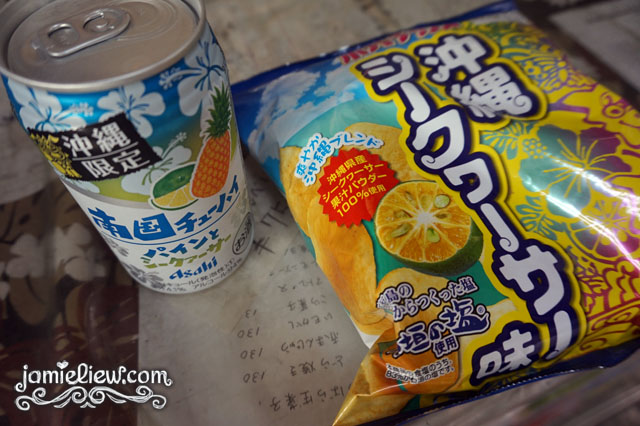 and oh! there’s like shikuwasa (a small green lime. or what Malaysians call Limau.) everything in Okinawa. shikuwasa alcohol, chips, chocolate, you name it. I recommend the drink as it’s really refreshing. others was just a little too weird for my liking. 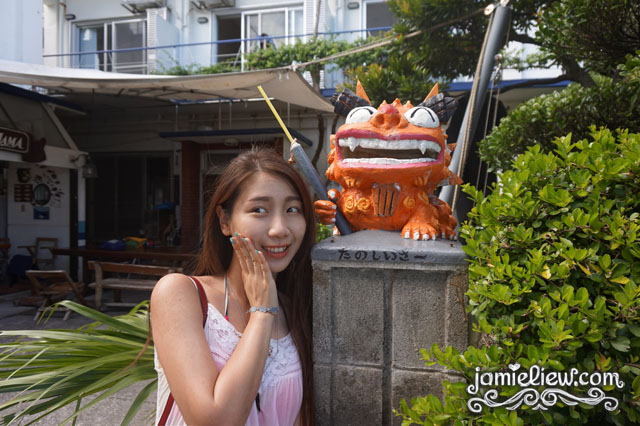 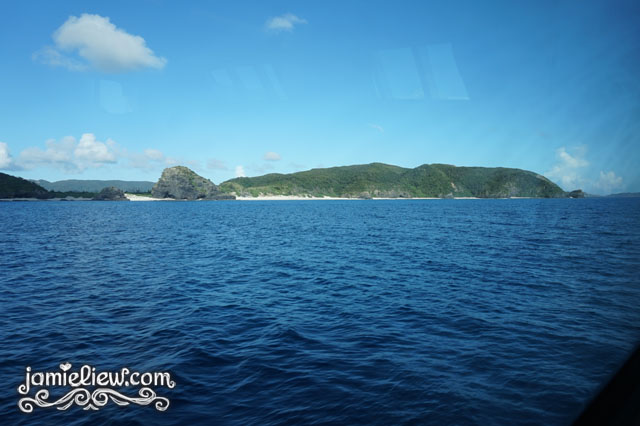 at 4pm, there was really nothing much to do. it was too late to hike up the hill for us to see the view and we were dog tired since we spent too much time at the beach haha. instead of taking the bus, I think renting a bicycle could be a good option as Zamami’s pretty big if you want to go through the whole place. but for us, we just chilled at the waiting room with AC on =D. it was super hot when we went and I couldn’t take it anymore at that point lol. 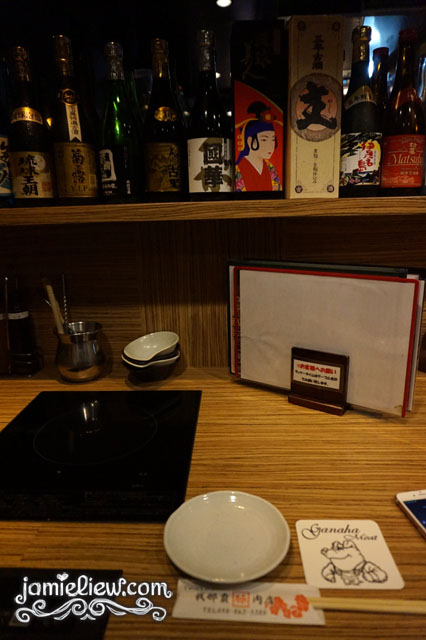 for dinner, we found a famous syabu syabu restaurant near Miebashi station named Ganaha Pork that serves Okinawa’s famous Aguu Pork for a very reasonable price (but still expensive T_T. it was only reasonable because it was Aguu Pork lol). we didn’t opt for the buffet which was just a tad bit more expensive since we weren’t that hungry and we paid around 7,500yen for the both of us. 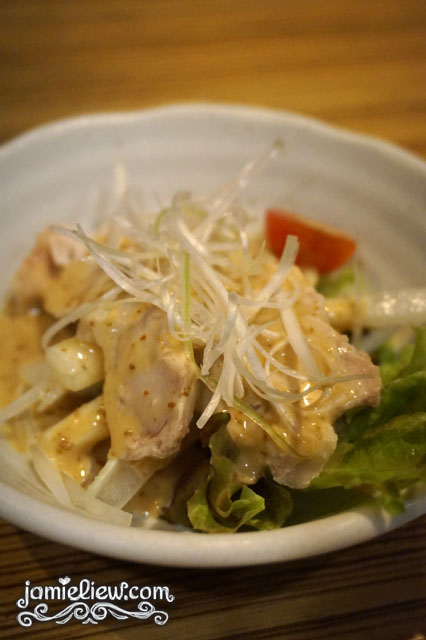 the starter was.. the best salad I’ve ever had in my life. chicken salad with cucumber topped with sesame sauce I believe. so yummy mmm. the chicken was soft and smooth yet springy and the cucumber was super crunchy. I really dislike how some restaurants in Japan serve you something small and meh like a piece of tofu and charge you 500-700yen (one place charged me 1,500yen for it ugh. but it was fancy.) for it at restaurants for dinner. but this place’s compulsory starter dish made me very happy. =D. 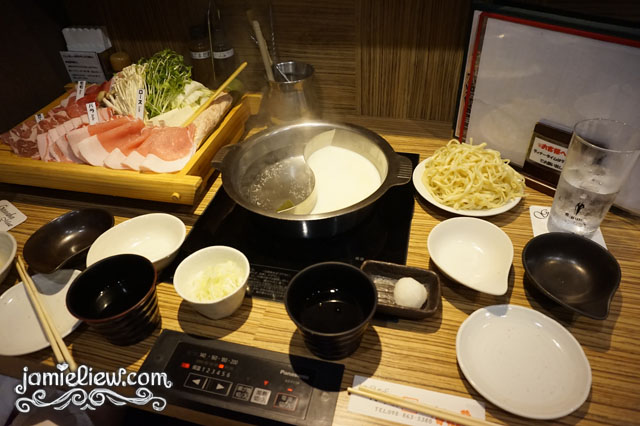 we had two soup bases. one’s the clear soup with a piece of dashima (seaweed) in it, another is soy bean which tasted pretty special to me. the greatest thing about eating at this store is actually the dipping sauces. they had 3 different types. one similar to light soy sauce, another’s yuzu sikuwasa ponzu, and sesame with oil. everything was perfect. all 3 dipping sauces. it made my day. it’s those shut up and take my money moments where all I want to do is devour all that sauce. 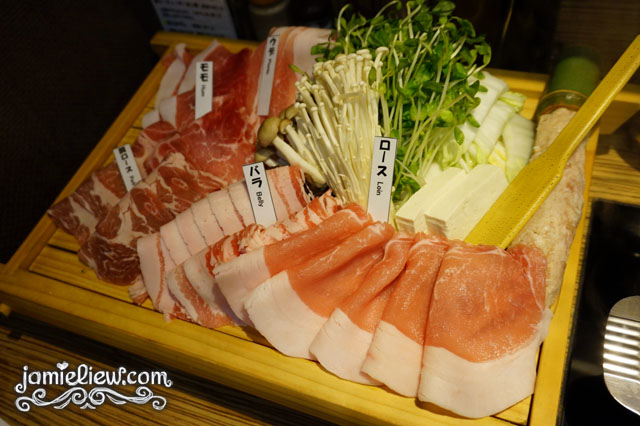 and of course.. the Aguu Pork quality was superb. 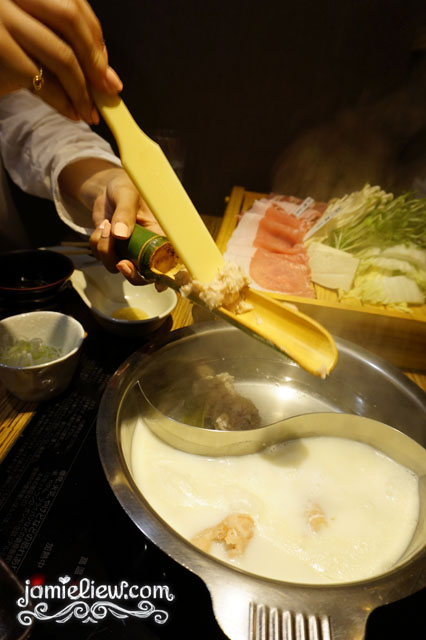 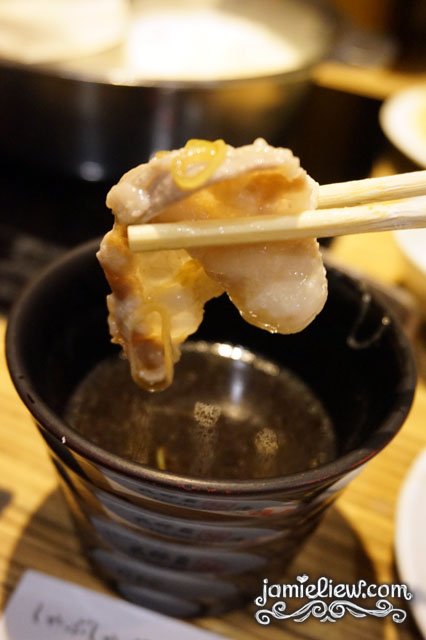 I don’t said megumi is not beautiful but not like you.I named green lemon,lemon beer.In beach you are looking my queen,its my own thinking.I love chicken,here its me,remind 2011.Thanks for sharing me a sweet story.