when one thinks of Japan, they’d usually think about Tokyo or Kyoto; which yes, is two of my favourite places as ones super high-tech and another is full of traditional stuff. but near Taiwan, there lies Okinawa, an island that’s pretty under-rated and is said to be better than Hawaii by some. (it is also named the Hawaii of Japan!) lucky for me, the tickets from Seoul to Okinawa was pretty affordable and there’s a direct flight so I decided to pay a visit to the other end of Japan!

after doing some homework, I found a list of places to go and things to eat and I couldn’t fit all of it in my 4 day 3 night schedule. so I’d recommend going there at least for 5 or 6 days! what I will not be covering is the cave diving and turtle watching in Zamami (I’d recommend to stay in Zamami for at least one night!) which I would really want to see but there was just not enough time T__T.

I landed just in time for a late lunch! so right after landed, we went to our guesthouse (which was really affordable esp in Japanese standards at 2,500yen per night per person for a twin room!) and asked for a recommendation on where to eat. 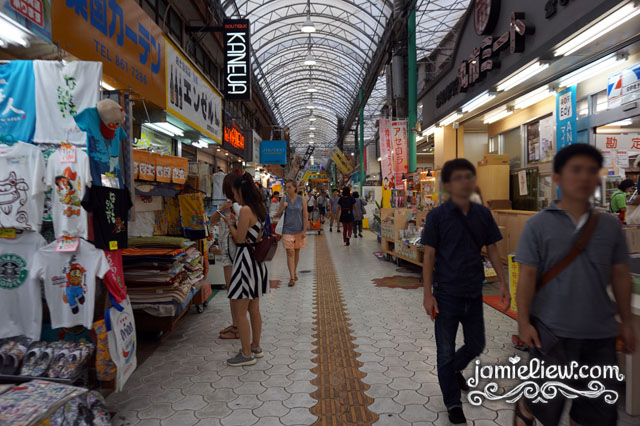 I lived near International Street or Kokusai Dori where there are a lot of tourists and food’s super expensive due to that. =(. but lucky for us, we found the recommended restaurant which was pretty secluded inside the roofed shopping street smacked right in the middle of Kokusai Dori. 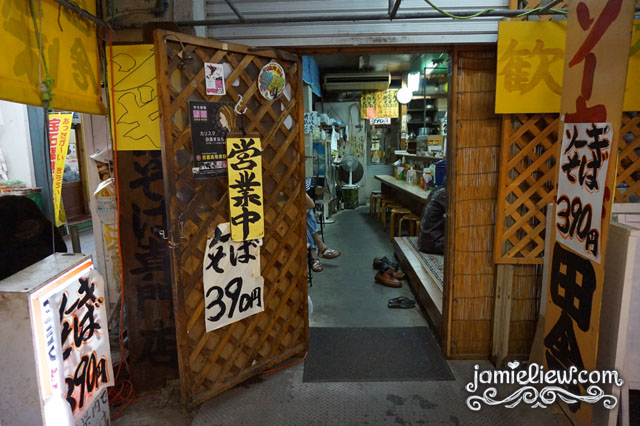 and it’s this restaurant! it looks pretty shabby and run down but their famous Soki Soba (similar to Okinawa Soba but just with different parts of pork meat) is only 390yen for delicious bowl of hot Soba! 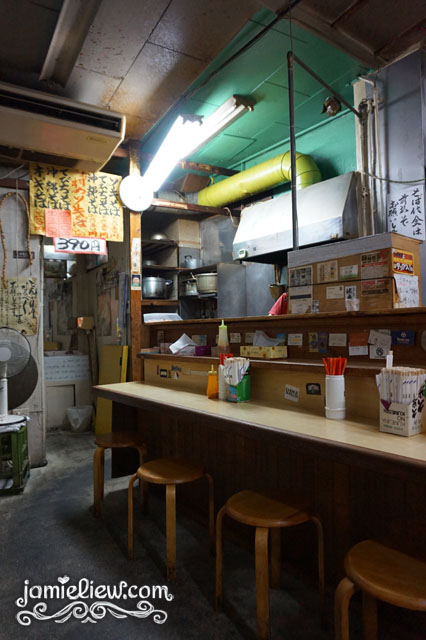 the interior was really old-school and it is exactly the kind of restaurant I like ^_^. 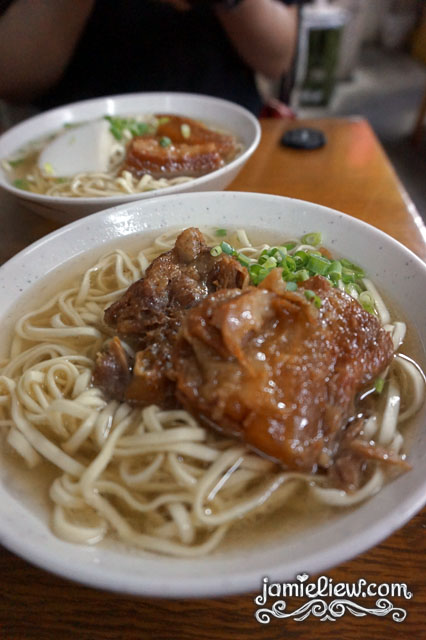 and after only 2 minutes, the Obasan whipped out this bowl of  simple yet delicious Soki Soba! the soup’s super fragrant and clear and the meat was so soft and yummy it felt like it has been stewed for hours. it was soooo good, I literally had this everyday ever since I went to Okinawa. well, this or Okinawa Soba which is pretty much the same. I had it in many different places but still this was the best! 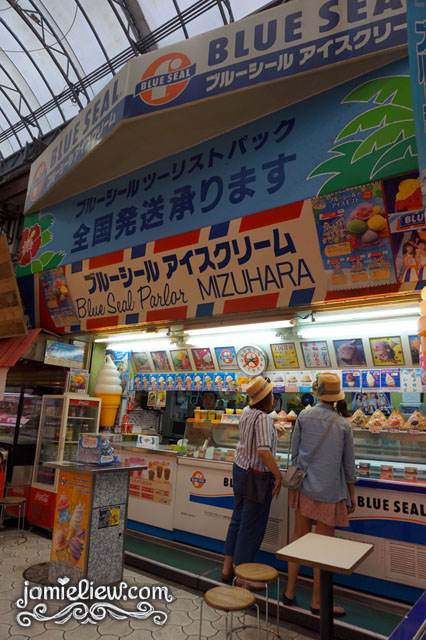 after a hot bowl of soba, we were literally dying from the hot and SUPER humid weather. so we stopped by Blue Seal, Okinawa’s very own local ice cream chain that’s only available in Okinawa for a cup of ice cream! it’s famous especially because of the wide array of flavours that’s only served in Blue Seal! 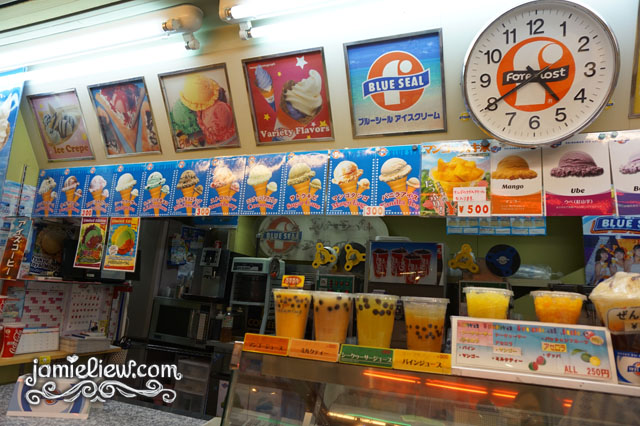 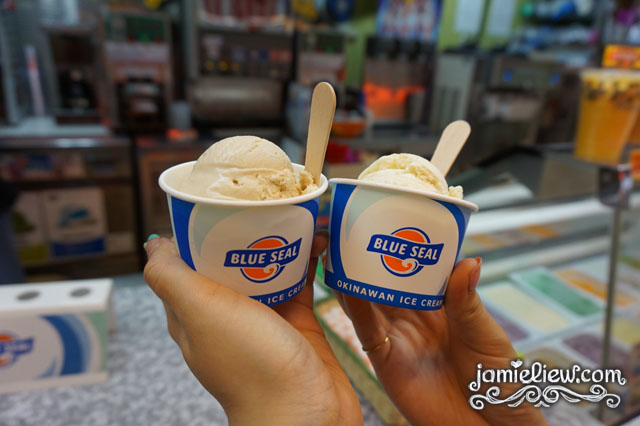 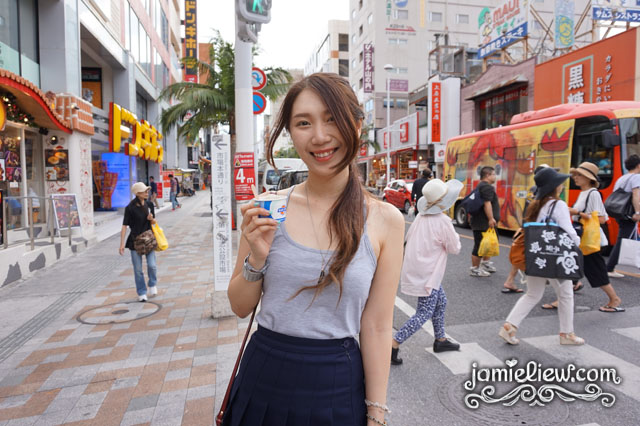 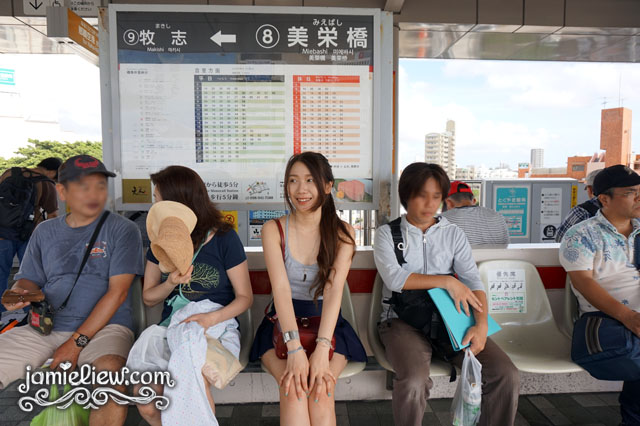 and waiting for the monorail. or what they call the monoreru. it’s really expensive but you can get the daily or two day pass if you’re travelling on the monorail for more than twice. after lunch, we rushed to the famous Shuri Castle which requires a short bus ride from the Shuri Castle Monorail stop and a hefty entry fee of 800yen. 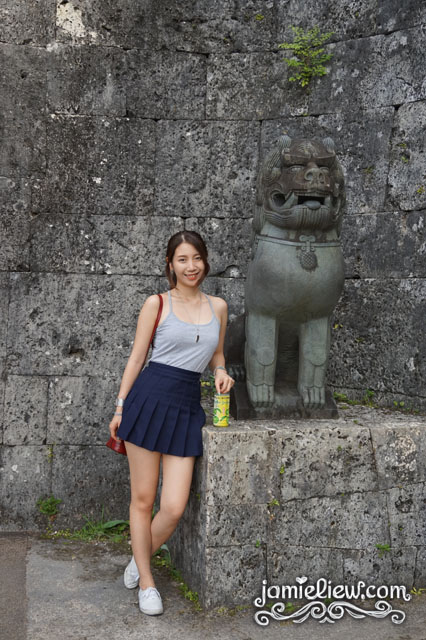 say hi to Okinawa’s famous Sisa! which are lions put outside of shops, gates etc. where people believe it to be their guardian. 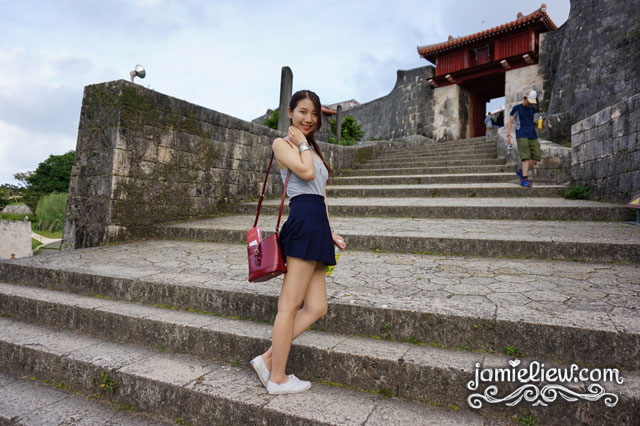 the entrance of Shuri Castle! 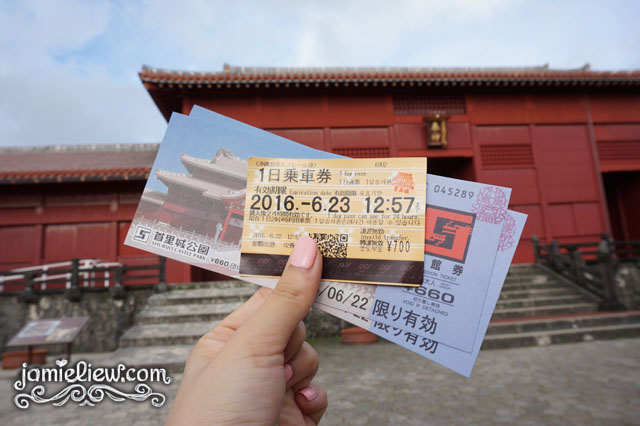 if you buy the one day or two day monorail pass, you can even get a 140yen discount for getting into Shuri Castle! 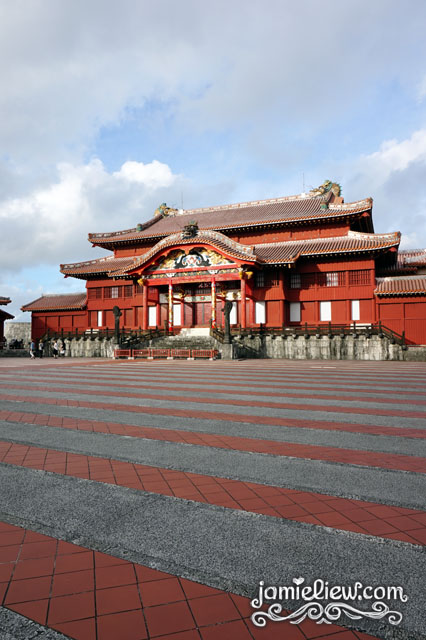 but man was it beautiful. although it’s really small. T_T. 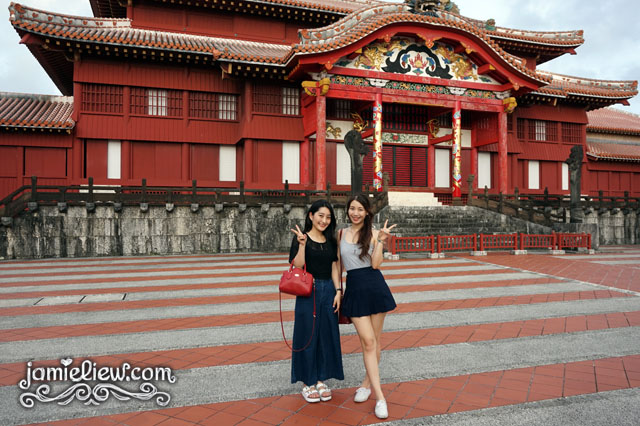 the cool thing is that you get to go into the castle although taking pictures at most places are forbidden. 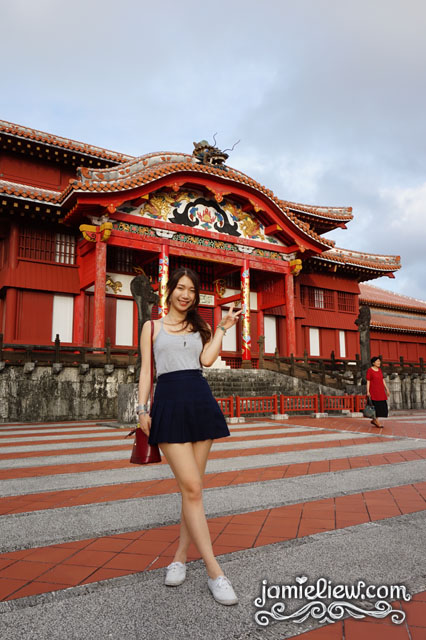 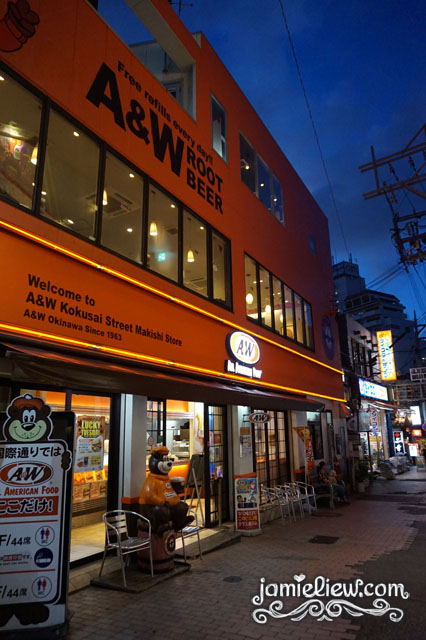 also, A&W is probably the only place in Japan where you can find root beer. Japanese people mostly find the taste of root beer revolting because of the similarity of it with the Japanese muscle-pain patches. but because of the amount of American soldiers here in Okinawa as there’s an army camp here, there’s A&W!!! along Kokusai Dori =3. 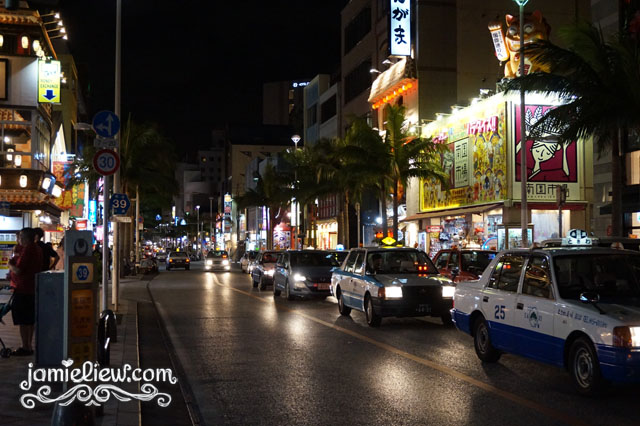 just another night at Kokusai Dori~ 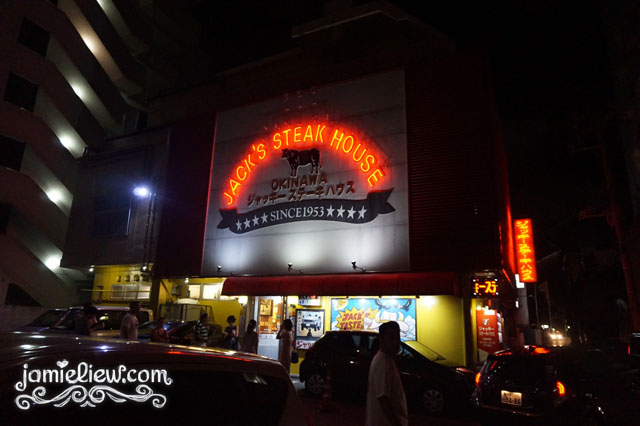 there are many steakhouses available in Okinawa again, because of the army base there and they all claim to be the best. but we did our research and found out that Jack’s Steak House is the most popular and also the oldest. and it’s pretty dominated by the Koreans. well, actually the whole Okinawa’s filled with Koreans. xD.

speaking of which, I was there when Leeteuk and BoA was there and I bumped into Leeteuk!! there was so many Korean people around but it felt like only me and Megumi recognized him and he even said hi!!! *faints* 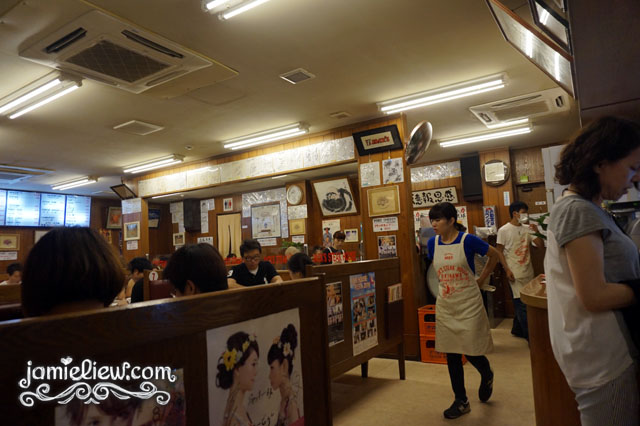 after waiting for around 30minutes (we went at around 9pm), we finally got a seat. 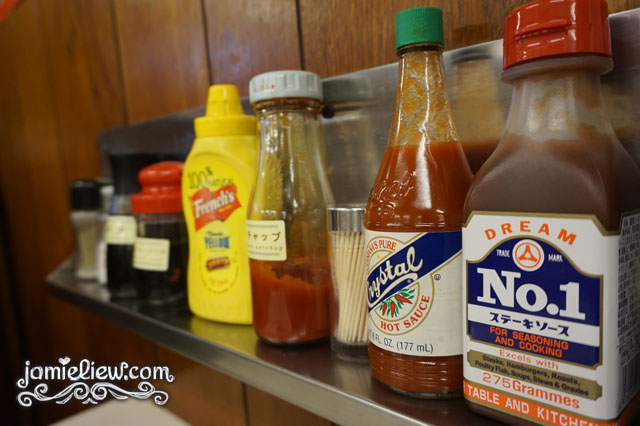 the many sauces available for their super diverse menu. and to be honest, for such yummy and quality food, the prices were super reasonable. 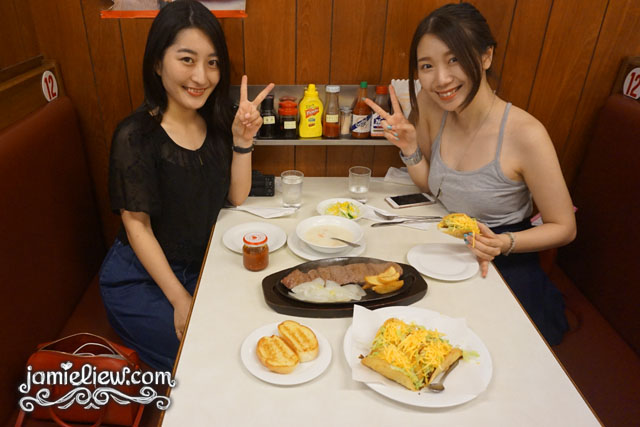 our bill came up to around slightly more than 3,000yen! well, because we ordered something else rather than just steak. 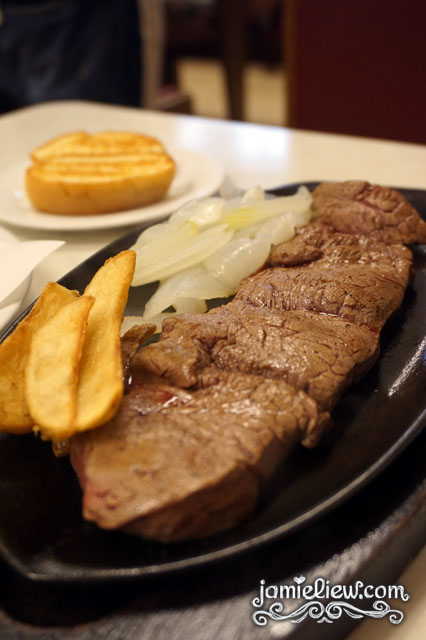 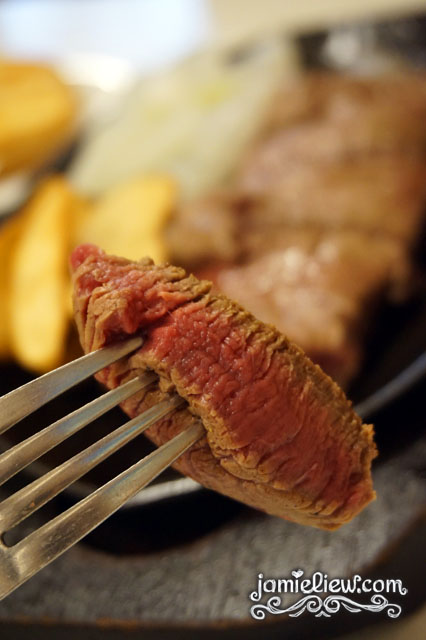 now look at that, that’s what I call medium rare xD. 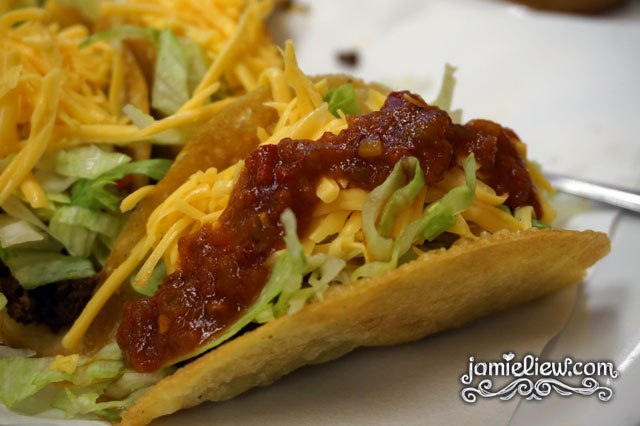 the taco’s were mediocre but the sauce that came with the tacos were.. absolutely amazing. 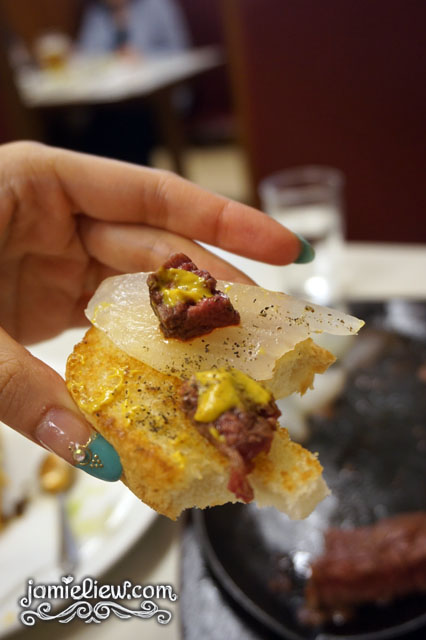 you can choose to have bread or white rice together with your steak (Japan.) and we opted for the super fragrant buttered bread. and eating it like this with the pork and onions? simply the best! 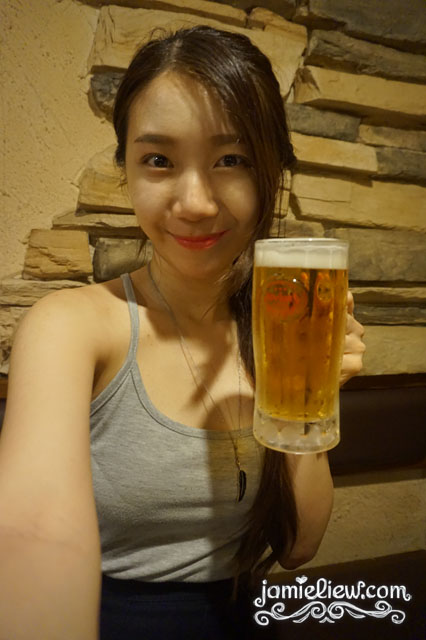 the night felt a little early for us so we went into a bar and ordered the famous Orion beer which was 500yen and tasted like the cheap beer widely available in Korea. I still don’t see what’s the hype with Orion beer and everyone travelling to Okinawa. everyone told me “remember to try Orion beer!” but nah. I prefer craft beers available all over Tokyo. and the famous Minoh beer of Osaka’s still my favourite! 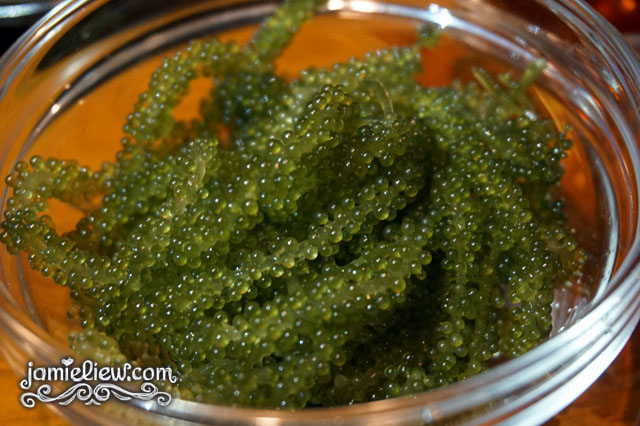 we ordered another Okinawan favourite, the Umibudo! or, the seagrapes. although it has a slightly salty taste to it, it was absolutely delish! especially for those who like Ikura, this will be super yums! especially after dipping it in Ponzu, a type of citrusy soy sauce. MMMM. 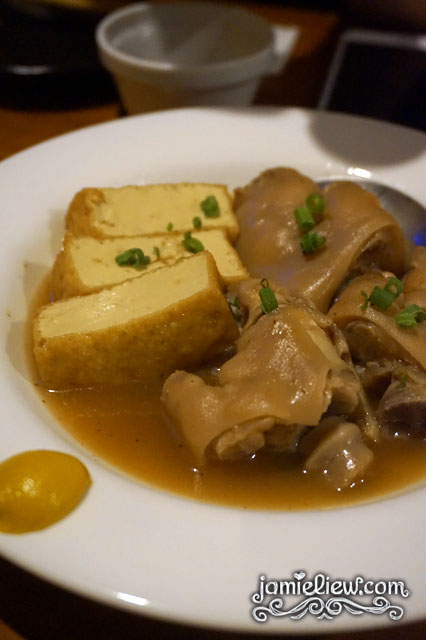 we also ordered pork knuckles as another side! which was really yummy mm. Japan. you never fail me!

that’s the end of day one!

I have read all the story.

I wonder how much is Umibudo or sea grapes in Japan, we have that here in Phil and it costs less than 50 pesos per kilo when you buy it in the wet markets in the Islands. 🙂