Halloween and my awesome dorm, ISDAK.

one thing I really love about my exchange here in Japan is actually the dorm. and why you ask? well.. fortunately I was placed in this dorm called the ISDAK. it’s basically like.. a “club” where you need to pay a membership fee. which is totally worth it because they have a lot of cool and fun events from time to time. so far I’ve been here for a month and there are 3 welcome parties, 1 Halloween party and a lot of private floor parties. again, I’ve only been here for ONE MONTH. maybe it’s common in Europe or USA but it is definitely not it in South Korea where we have to RENT a whole apartment/hall just for MT and probably a lot of drinking in bars.

okay so first let me talk about the Halloween party which happened.. yesterday. 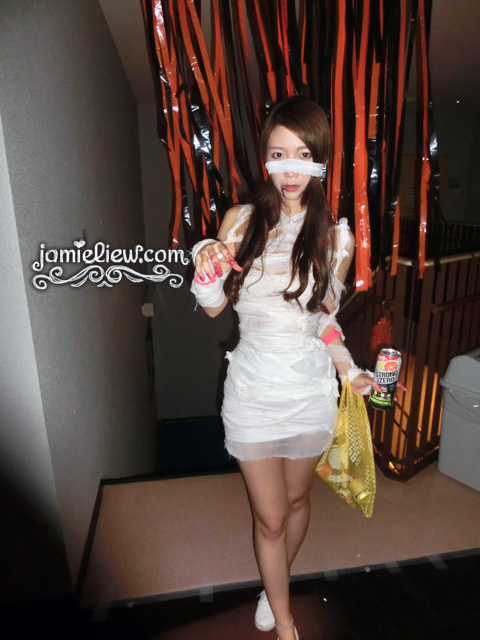 I dressed as a mummy, if you can’t tell. not a post-plastic surgery patient. I’d need a super swollen face for that xD. 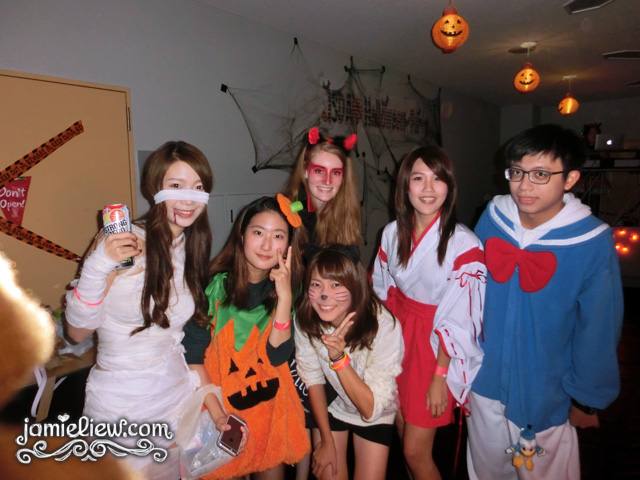 everyone dressed up so well! 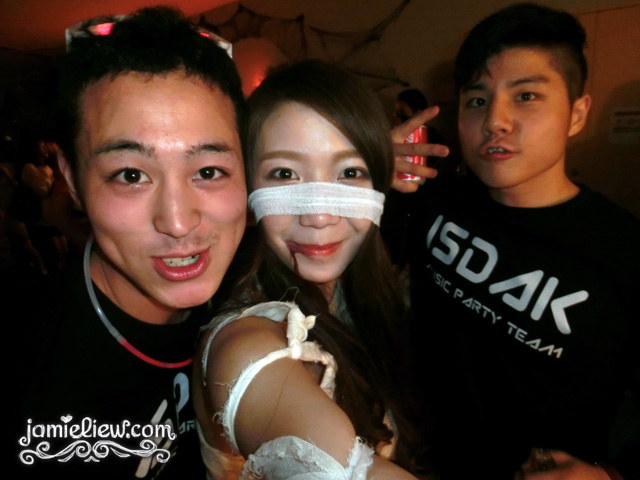 the organizers of the party! they spent the whole afternoon preparing so thank youuuuu! 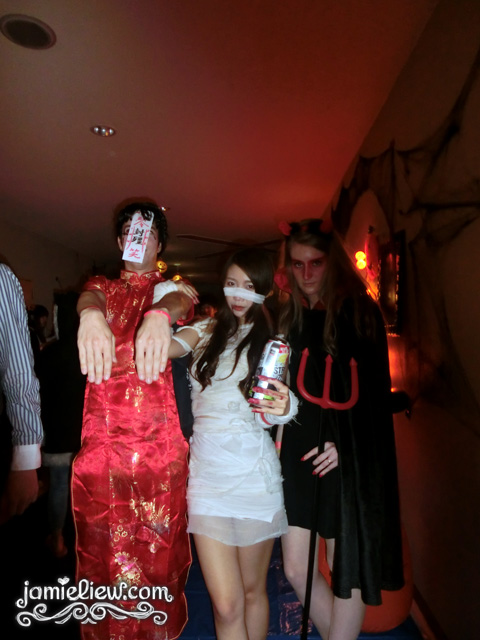 here we have Pedro dressed as a CHINESE WOMAN. 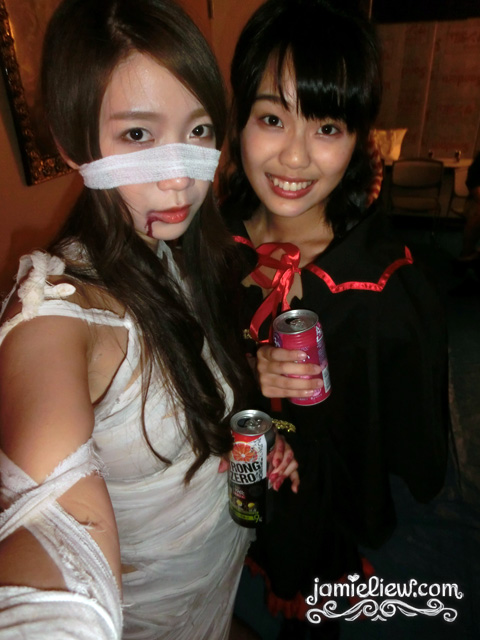 Ada, my favourite dong saeng from HK! shes a vampire with no blood on her lips hahaha. 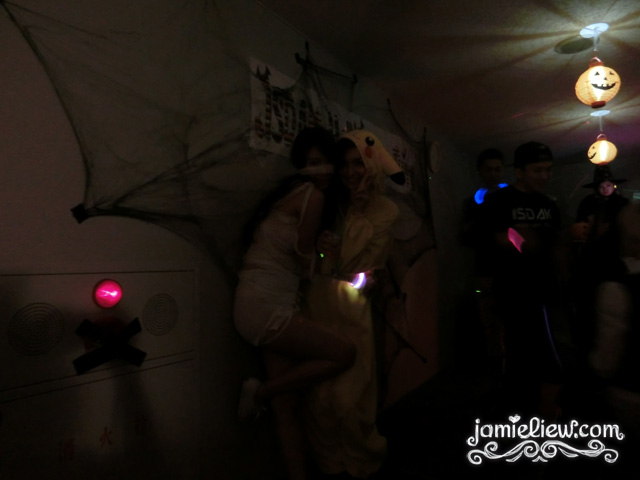 the mummy raping the Pikachu HAHAHAH. sorry for spoiling your Pikachu imaginations! 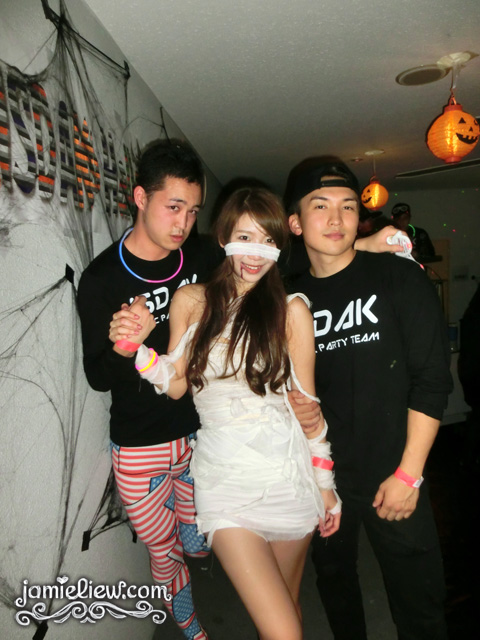 Ryuta and Manlai! Manlai’s from Mongolia but I thought he’s Japanese at first because he’s superrrrrrr fluent in Japanese. D=. I was drunk when I took this picture *coughs*. 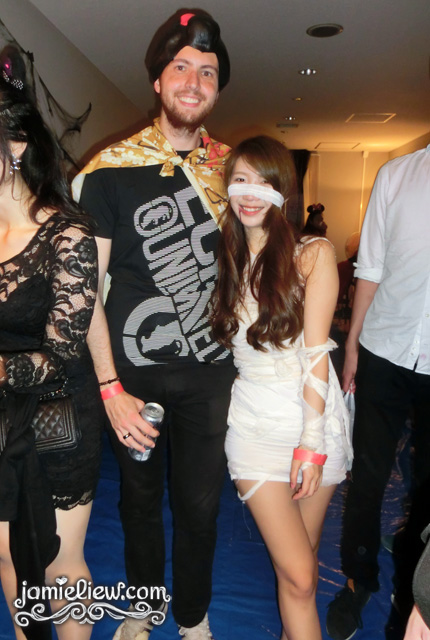 and we have the tallest guy in ISDAK, Gus! you’ll never guess where he’s from. seriously. nobody could. Brazil. 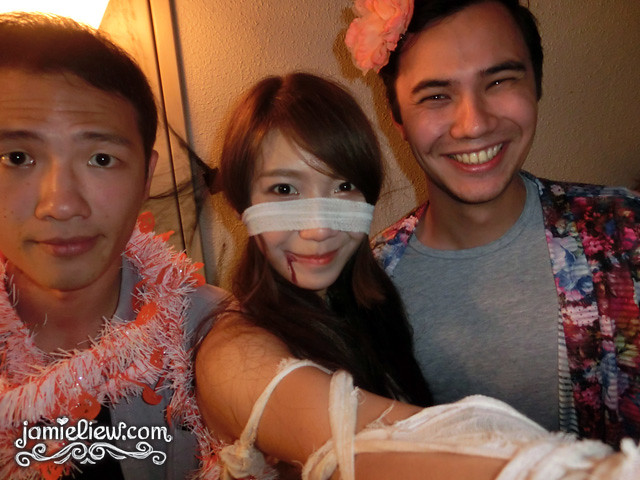 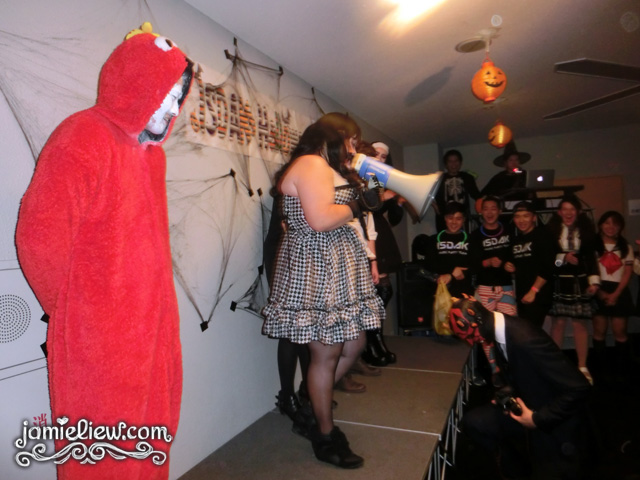 the super cool costume contest! I participated for the “sexy” contest and won! but the prize was.. seriously not usable. see through pajamas and panties LOL when will I ever get to wear that pfft. and let me show you who I thought had the dopest costume. 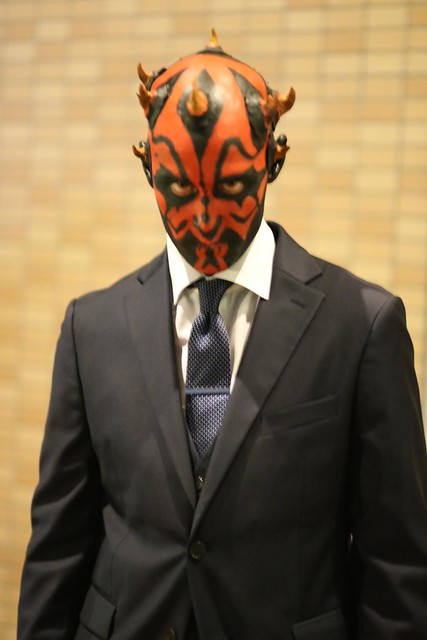 Darth Maul! I kid, it’s Roland from France. he SHAVED his hair just to be Darth Maul. that amount of dedication. respect. okay lets move on to other smaller scale parties. 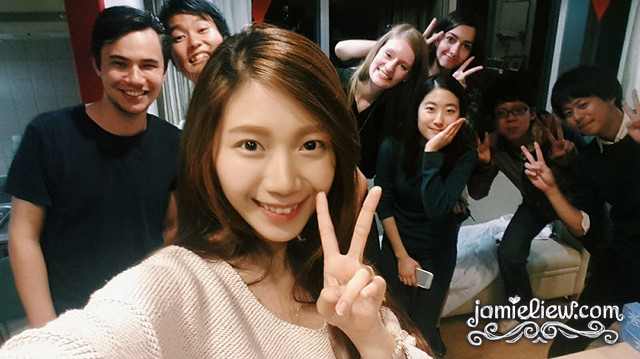 so we receive something called the “floor money” where it can be used to buy toilet paper, detergents, TV or.. well.. throw a small scale party. we bring our own drinks to parties normally and it’s really fun as we get to sit down, talk with people.. mainly in Japanese. I’ve been to 3 floor parties so far and I was the only one who didn’t speak Japanese in 2 of them. 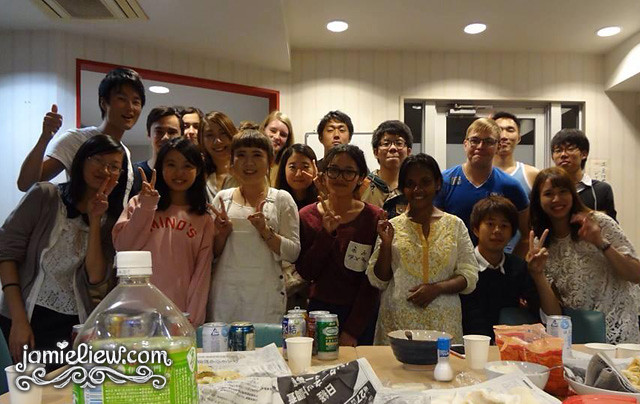 see, out of all these people I am the ONLY one! T_T. okay, to be frank I DO speak a LITTLE Japanese. but it is far from enough to make a normal conversation. most people turn to speak to me when I go out with my German friend  but I always gave the clueless face and they all get surprised when she speaks to them in fluent Japanese. ahhahahaha. 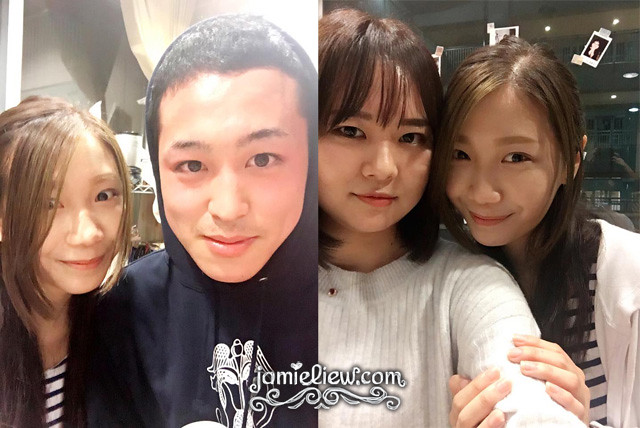 Ryuta and Jihye! these are the only pictures I have from the 2nd floor party I went and I took none for the 3rd. but it was a beer pong tournament party HAHAHAH. it’s so funny how the organizer, my German classmate, asked people to e-mail him to register to participate in the tournament. xD. it was super fun but I was so drunk I forgot to take any pictures.

there was also a “Kodaira Tour” event. the place I’m living in is called Kodaira. a humble town in Tokyo. which doesn’t resemble Tokyo at all hahahaha. at this event, we were told to go to certain places to take pictures in front of them to get points. and guess what, our team won 2nd! just 1 point away from the 1st team anyways but because we didn’t know being late would cost us points T_T so some people took their sweet time when coming back hahaha. but anyways, check out some of the awesome pictures we took! bare in mind we don’t know each other prior to the event since ISDAK is home to students from 4 different universities~ 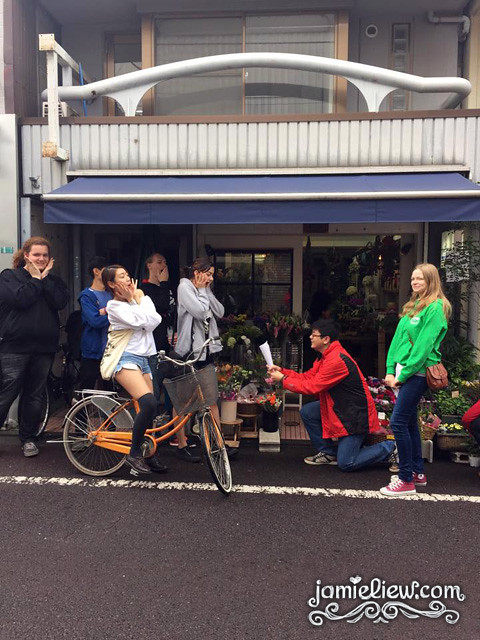 I had my bike with me because I hurt my leg =X. 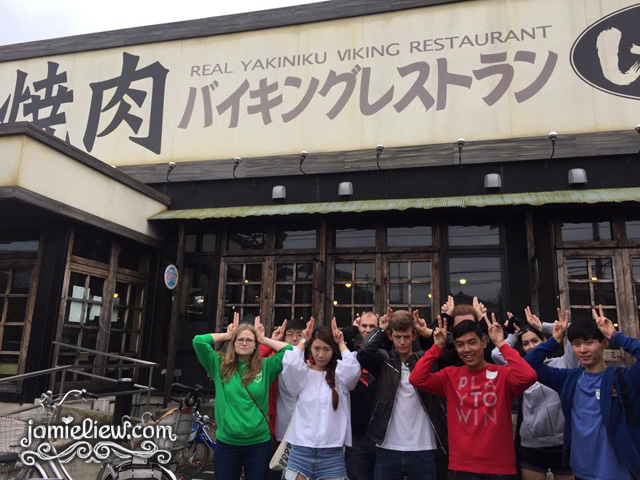 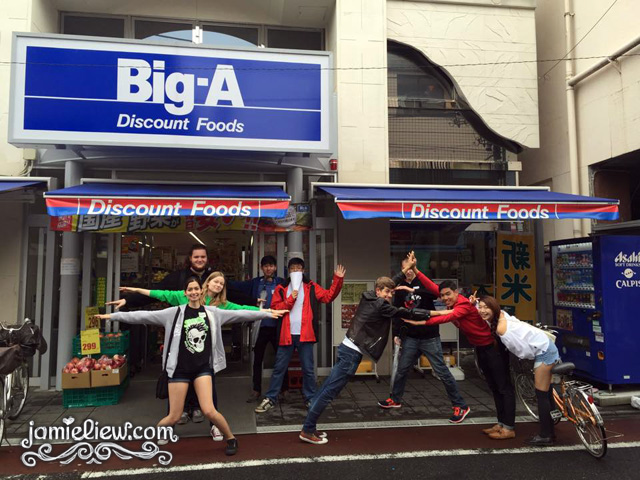 it means BIG A. BIG in Kanji looks like that! 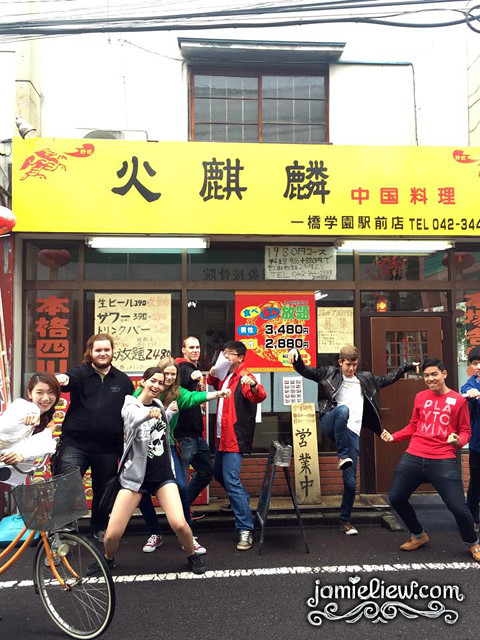 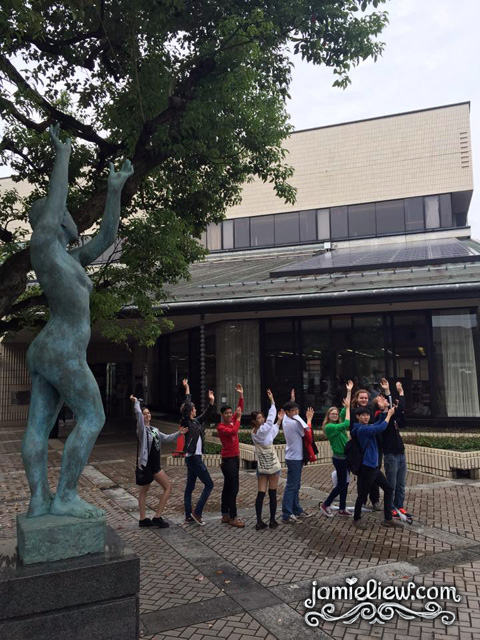 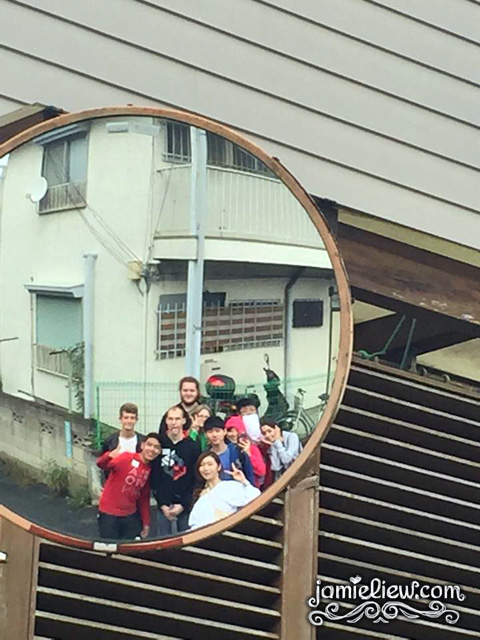 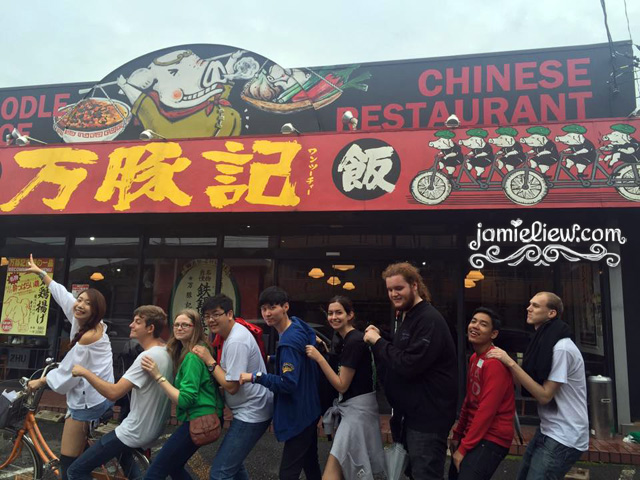 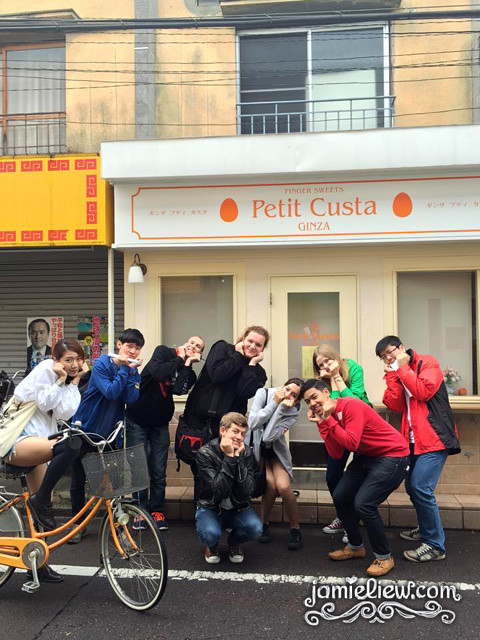 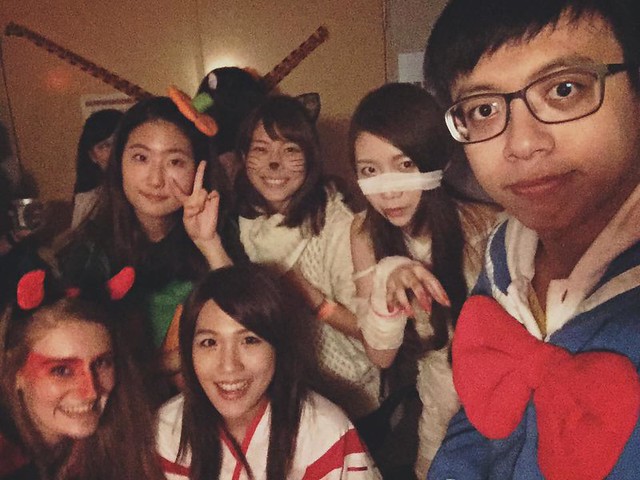 it’s a pity how Hitotsubashi isn’t as well known as other Universities like Waseda when getting in to this university is much more difficult and valuable than say, Waseda. many students here end up here because they did not get in to their first choice university. but for me, Hitotsubashi was my first choice haahha. I did a survey on all these universities and found out that the ex-prime minister of Korea graduated from Hitotsubashi! isn’t that amazing? well many students turn out to love this university a lot. the only bad thing is that it’s situated pretty far away from the heart of Tokyo so.. it does feel like I’m living at the countryside. however, I’ve always disliked how people in Tokyo are always in a rush and there are just TOO many people. there are a lot of neighbourhood events here held by the super friendly older folks living here and it’s really pleasant and I love it very very much! I just couldn’t express how awesome this exchange is to me and I really regret to have only applied for one semester. however, I’ve always been super scared of earthquakes and all hence I didn’t want to stay here for such a long time =X. but whatever it is, Japan has been really nice to me so far and I hope I can find time to tell you more about my amazing experience!

there are heaps of homework in this Univ. and after writing this post, it’s time to study. T_T. if you’re not the type who studies hard, maybe… this university may not be a good choice for you. unless you don’t mind failing hahaha.