1st week of Uni in Hitotsubashi.

notice: this post is only useful to foreign students who wish to go for an exchange in Japan. but if you’re bored you may read it to learn a little about the living expenses and MY EXPERIENCES! ^^.

okay, I have been.. quite 정신없어 (so hectic that I can’t concentrate..?) for the past one week because the first week of Uni’s just.. super tiring. more so for students traveling from Europe, Scandinavia or America because of the time difference. despite the jet lag, they had to wake up early in the morning AFTER dragging their heavy suitcases to the University that’s located pretty far away from the heart of Tokyo. but it’s still INSIDE Tokyo. never knew Tokyo was this huge T_T.

so the first day, I came from Kansai with the night bus and… heck I am not sure if I should’ve not been stingy about the extra 4,000yen (and take a Shinkansen which costs 10,4000yen with online booking) because the bus gave me a neck pain. whatever it is. I had 60KGs worth of bags and suitcases with me and I reached in the morning. little did I know, there are no elevators nor escalators in the morning. so.. I had to drag my 60kgs worth of stuff down the stairs. ALL BY MYSELF. two flight of stairs T_T. PLEASE don’t arrive in the morning.. well that’s not all. the train that goes to my uni.. there’s another flight of stairs UP. thank goodness some nice people helped me along the way.. although I did 90% of everything still. I had neck, back, leg, arm pain for the following few days. =S. so on the first day, these are a few things we had to settle.

1. Internet: I’d die without it. it costs 7,000yen for one semester. it gets cheaper if you take a year.
2. Bedding: tell me why they do not recycle them gah. it may be dirty? well we can always wash them T_T. it costed me a little below 7,000yen and I got most of my beddings from Konan (コナン) which is located 20minutes away by foot. because I didn’t like any of those sold at the Uni. I got them a day after actually. BY THE WAY, if you’re lucky you may get curtains from the past owners. if you don’t.. you either get woken up by the sun everyday at 630 or.. buy that curtain! I’m a cheapskate so I am getting tan every morning.
3. Necessities: shampoo, soap, cotton buds, cotton, breakfast, hangers (but I got them from the recycle box hahaha), hair dryer… etc. basically all that. they costed me at least 3-4,000yen.  I bought more groceries later which costed me around 3,500 in total =S.

so that’s all for the first night. ended up pretty broke. there was a welcome party at least where food was free T_T. thank goodness.

the second day. orientation finally begun and we had to go register ourselves, orientation was fine, but the toughest of all? the placement test. I didn’t know why did I take it since I forgot most of my Japanese. but… I was in between of two of the basic levels so.. I guess I hadn’t forgotten too much. so basically after that super difficult placement test, everyone’s all drained out and everyone just want to go home. but because my awesome German girlfriend who’s being very ambitious, we went to Konan to get our blankets (thicker! for winter!) after the long day at uni. returned home super tired pfft.

third day. another orientation day. it goes on for 3 days by the way. we had an info session on the courses.. which is quite ironic because it was what we already know. well unless somebody did not read the information sent to them carefully I guess. and we had the course registration and scholarship session which was very important. THEN.. our Japanese results got out. I actually got into the basic 2 class but.. I don’t know.. it’s a little above my level and I want to be lazy. =S. then there’s an orientation at the residence hall where we were told what to do in case of an earthquake, the rules of the dorm, made our bank accounts and.. that’s probably it. pretty informative.

fourth day. more registrations. this time at the city hall 시청. got our insurance done. I currently don’t know much because they hadn’t ask us to pay or anything. I hope it’s all paid for T_T. super broke already sigh. we then head to our campus and did ANOTHER BODY CHECK UP. basically we had to get our stool, urine, xray, eye, weight, height everything done BEFORE coming to Japan to get the visa. and after arriving, we had to do it all over again. but this time, thank goodness they excluded the stool. that was disgusting =(. urine was disgusting enough sigh. we also had a campus tour but it was raining cats and dogs. not the best day for an outdoor tour!

4. Transportation: so far, I’ve commuted to and fro via train which costs 300yen (with a Pasmo) so a round trip costs me 600yen. and… in 3 days, I went through only 3 stops. 4.5km. and it costed me 1800yen. mmhmm. plus I went to the bigger stations to get some stuff during the first day. don’t do that. go on the second because you’ll HAVE to spend that money anyway. so in total.. my train fee was.. 2,7ooyen for 4 days. absurd. I know. if you pre-download google maps, you can actually take the train from Shin-Kodaira. it’s around 15-20minutes walk away but it only costs 154yen per one way. I mean, walking to the nearest station already take 7-10minutes. why not walk double and save your cost by half. it’s almost 50% cheaper! exercise.

many of my friends know this but.. I can’t ride the bike. and everyone in Japan seems to grow up ON THEIR BIKES. and getting a bike is definitely the cheapest option. why? because one month of transportation to school itself will cost you 12,000yen. 6,160 if you walk to Shin-Kodaira station. how much does a bike cost? 10,000yen. how much does RENTING a bike cost? 1,000yen. at orientation you will get a Kunitachi newsletter where they’d post about this awesome lady who runs “maho no lamp” and you should call/email her ASAP to get a spot. there aren’t many for rent so be quick. I got a bike despite not knowing how. but because I was lucky enough to meet the most awesome German girl on earth, she guided me through it and today, I rode my bike for the first time and….. I made it home. in around an hour (it’ll take you 15-20 if you’re a pro) but still! I almost crashed into some cars and made so much stops. I was a total public nuisance. T_T. please forgive me wuwuwuwuwuwu.

so on the fifth and sixth day, I just.. well.. stayed at home to rest my aching body. but we cleaned our super dirty flat (one flat consists of 6 rooms with 2 shared showers and 2 toilets. yes it’s separate.) squeaky clean  (did the dishes for 2 hours. can you imagine that?!) and made dinner together! Hayashi Rice yum yum!

seventh day.. first day of “shopping” for the classes. you can basically sit in 2 classes as each class has 2 orientation sessions and you can sit for 2 classes of the same hour to choose which you want. I went for.. all 5 periods of classes. super tired. U_U. and that’s today where I biked. I feel so bad for not knowing how to bike. seriously, if you’re coming here make SURE you can bike in a straight line and not like me. =(.

5. Jasso Scholarship: just apply for it. chances are pretty high! Japan’s super expensive seriously. if you get it, the stipend are banked in at the end of each month so prepare around 100,000yen when you come. rent for the first 3 months is payable later so don’t worry about not having enough money at first.

6. Living expenses: food in uni is cheap and delicious. it can go as low as 200yen if you eat little. for me, it’s always around 300yen. you pay as you eat. literally. there’s many sizes of rice so you can always choose one that fits you! food outside is the basic Japanese price. around 600yen per meal at the very least? goes up to 1,000yen. the restaurants near Hitotsubashi are pretty expensive. they do not have any Gyudon (牛丼) shops nearby. but there’s a MOS burger shop! I absolutely adore MOS burgers. super yummy. and it’s coming from a girl who don’t eat McD. whatever it is. save money, eat at the cafeteria! you can get a phone sim with internet of 3GB at Bic Camera for 900yen I think. total bargain. then uh… other living expenses is as of below (prices are approx. excluding 8%tax):

you get the picture right? when rent in Tokyo generally costs you 70,000-80,000yen, the dorm here costs around 11,000yen (without bills. another 4,000-5,000yen for it I heard). very very affordable. which is why I love my Uni already. the catch is that it’s far from both the city and the university. a trip to Shinjuku will set you back at 340yen for the cheapest route. and 540yen for the normal route. sigh.

and here’s some pictures. 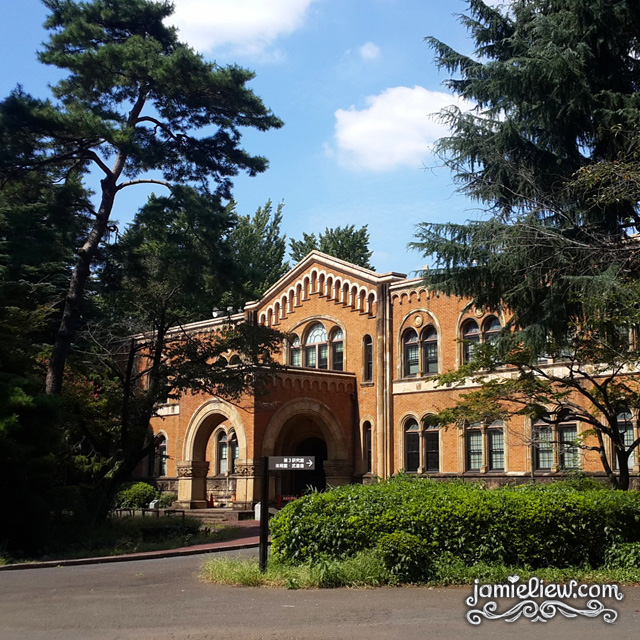 the beautiful Hitotsubashi University. it’s small but considering the limited majors offered here, there are pretty many students! they only offer commerce, econs, law and political studies but there are over 5,000 students! and over 100 exchange students. the halls and classrooms are mostly pretty old school hence it’s really really special. I felt like I’m studying in Hogwarts. well not so super nice but.. you get me. 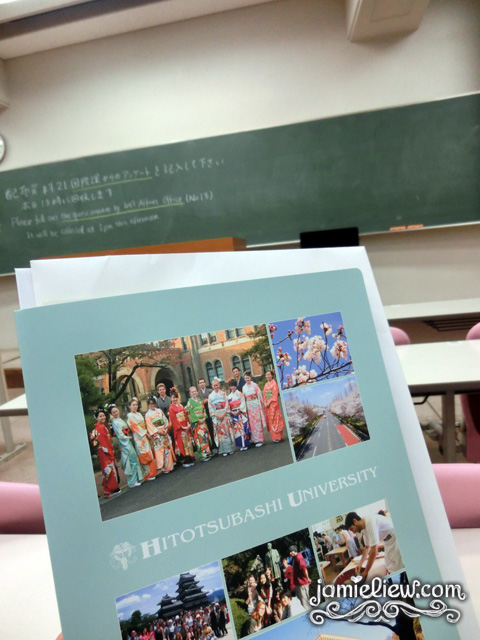 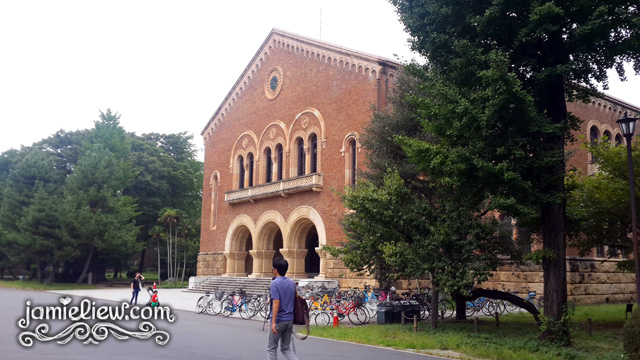 the grand hall. apparently only open during super special occasions. 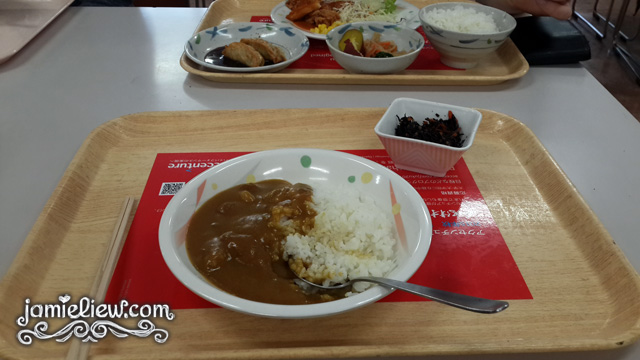 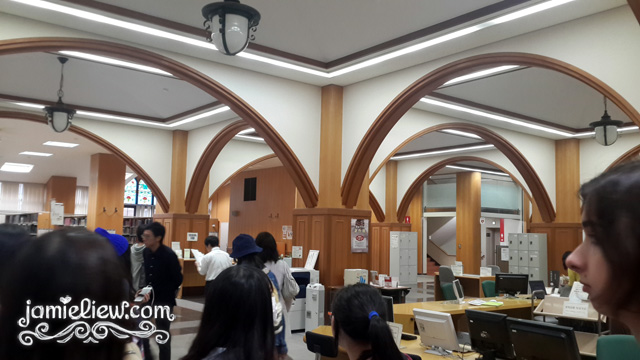 library tour~ there’s a place that’s really pretty but we can’t take pictures of it pfft. google for Hitotsubashi Library and you’ll see. that place is like legit Hogwarts. I think because camera phones makes a sound in Japan. but mine doesn’t!! =S. I shall try to sneak one =X. 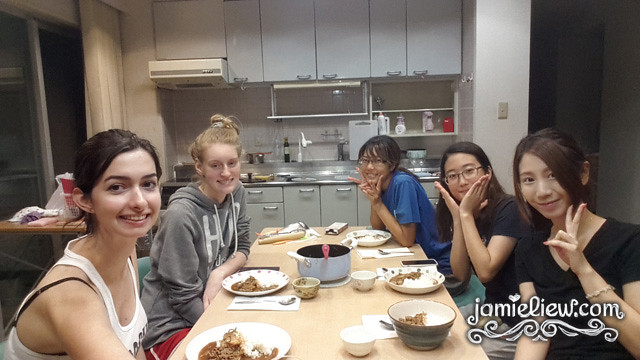 our first housemate bonding night! missing one girl from China =(. we have Nathalie from Canada/France (only 18 T_T.), Eileen from Germany, Rika from Japan (prettiest Japanese girl! =3.), Eunseo from Korea and myself =D. 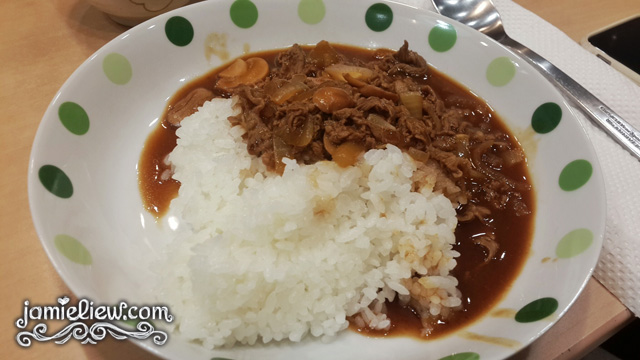 we made Hayashi rice. it looks like curry but it tastes nothing like it. it’s very very tasty actually. I think I’ll stock some when I go back! 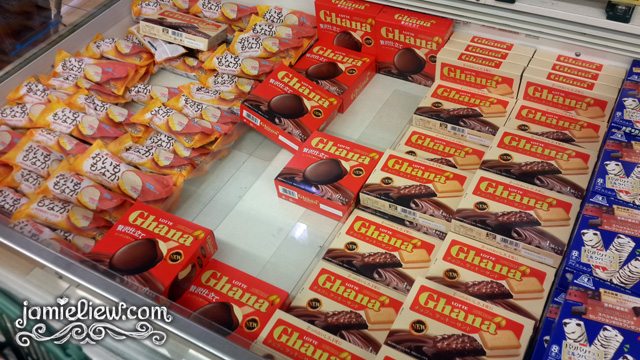 just wanted to point out how that ice cream look like goguma and there are so many Ghana ice creams here! 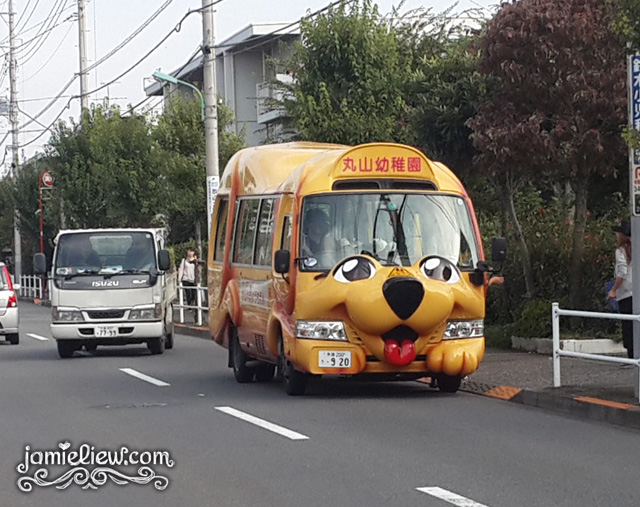 and a random cute kindergarten bus I saw on the way to the station today. CHO KAWAII!

OMGEEEE Jamie, why are you in Japan now? did you transfer school or in an exchange program?
I wonder what course you are taking.

actually they do sell/have hayashi pre-mix powder in korea too i guess you might overlook on it at the supermarket maybe. i only know 오뚜기 brand has it not sure if other korean brand has it.