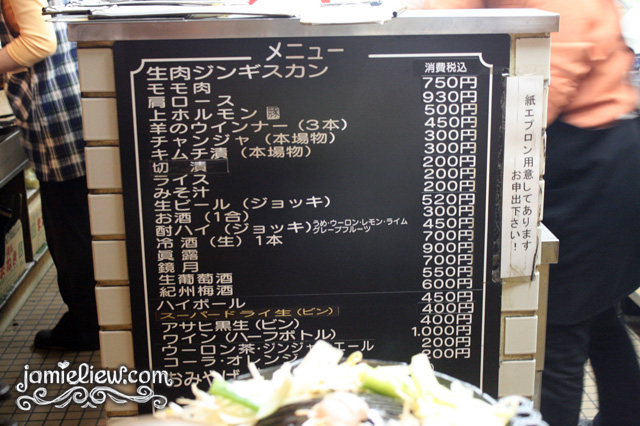 the prices of 1 portion of meat is around 500-930yen. pretty reasonably priced no? hey it’s lamb meat! I think there were cheaper stuff but the cheapest one I ordered was the 500yen ones. they also have internal organs and all but I opted for all meat. 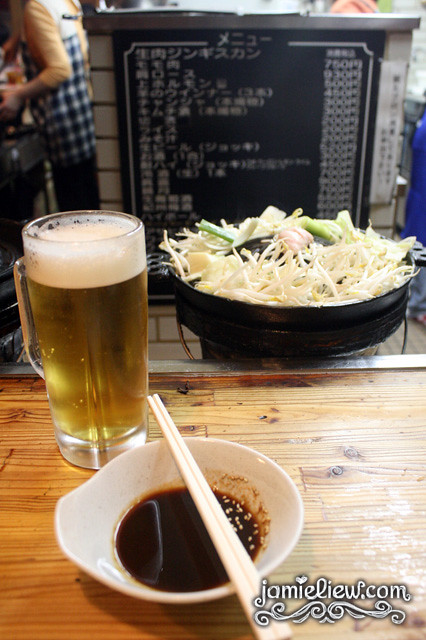 what’s better than to have a chilled mug of Sapporo beer in Sapporo with Gengkhis Khan? my meal couldn’t have gotten any better to be honest. it was my most enjoyable meal throughout my whole trip in Hokkaido.

oh and that sauce is just amazing. it is a little salty but it goes with the meat so well I just had to dip a lot of it. the sauce tastes like the usual yakiniku sauce except that it had a hint of garlic and chilli flavour to it. 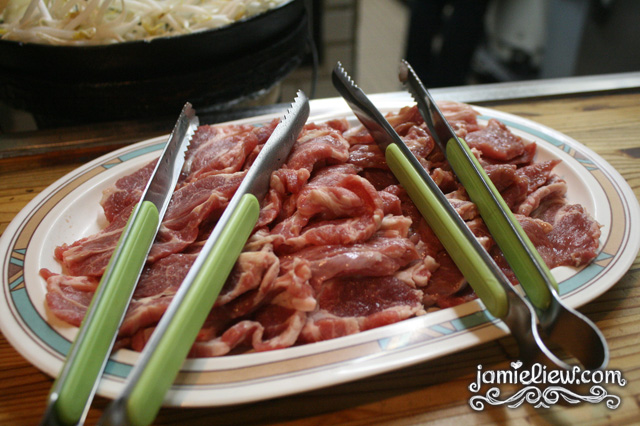 because I am a huge fan of lamb meat (Korea’s lamb meat costs a bomb and they only have them on skewers), we ordered 4 portions for the 2 of us. where in the end I added 1 more portion just for myself to devour. yeap. I may not look like I can eat a lot but I had 3 portions of Genghis Khan. hahaha now that sounds wrong. 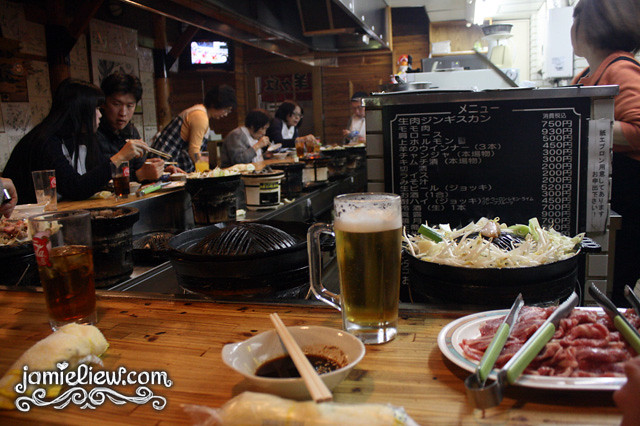 the small restaurant I went to had 2 floors and they only had such limited space but yet their service was so good. they asked if we needed more vegetables and served us with patience despite the long queue of people waiting outside. I was lucky that I only waited for 15minutes since they had 2 spots and people in front of us were all groups of 3-4 people hahaha. 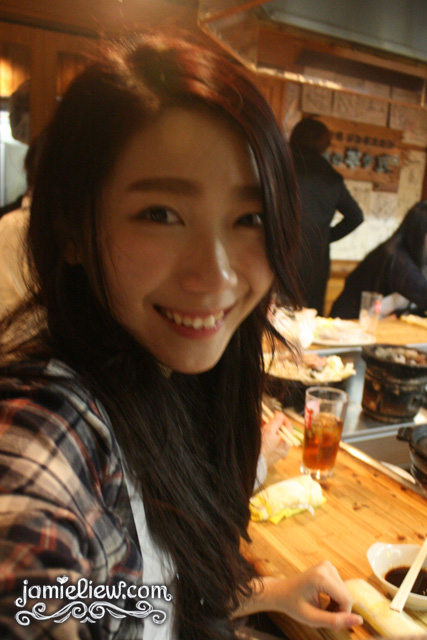 waiting impatiently with a happy face for my meat to be cooked! 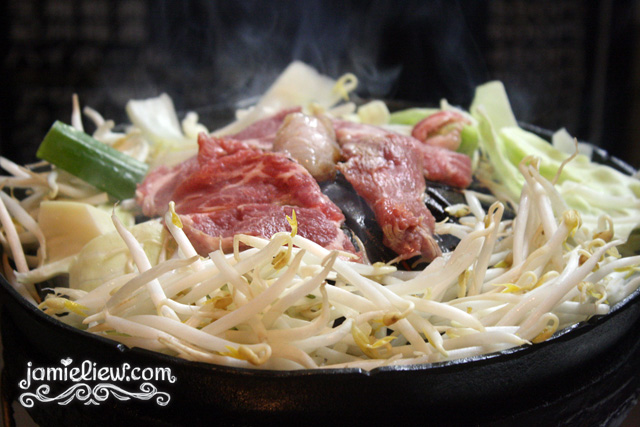 TADA! LOOK AT THAT FRESH MEAT. have you ever ate mutton that MELTS IN YOUR MOUTH? it’s like the Kobe Beef for lamb meat. except this is much more affordable compared to Kobe Beef. I’ve never had lamb meat like this. this was one of the reasons why I want to return to Hokkaido so bad U_U. also, even if you come alone, there is a BBQ plate for every seat so no worries! 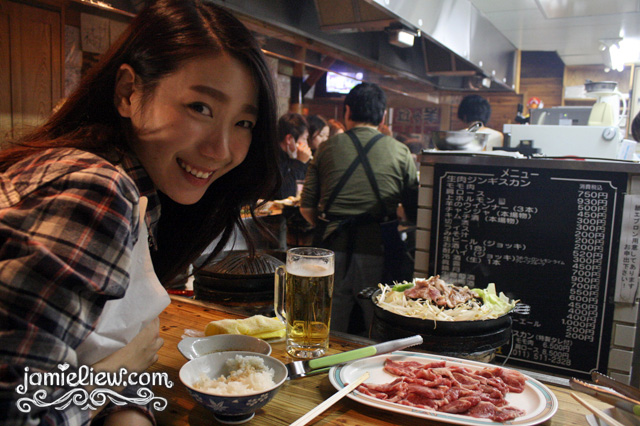 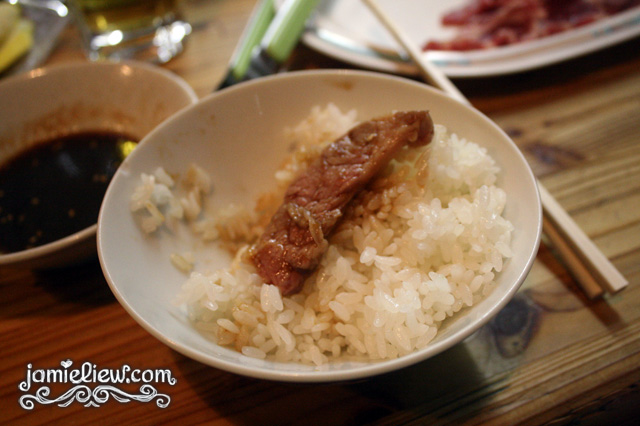 so I dip it with that much of sauce and let it sit on my rice for a bit so the sauce will get to my rice and ohhhhhhh it’s serious yummy stuff. and Japanese rice’s so delicious. do you know that Japanese rice are so delicious they taste good by itself? 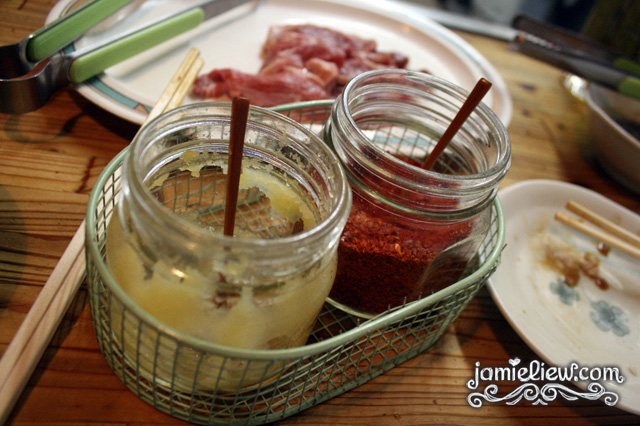 if you love meat, you’ll have to go to Hokkaido because this will blow your mind away!

Hi jamie!! I wonder how much you spend on food alone considering that you always go to fancy restos (maybe?) hahahaha.. Are your friends that generous though? Hihihihihi

Japanese rice is nice bec its japonica,,,their rice is aromatic

May i know if you still recall the name of this place you went to?
On a tight budget here~ 😉

No worries 🙂 thank you for the description, will try hunt it down
Good info on the blog btw, was looking for interesting places to go in Hokkaido and i found your site!
Thank you for blogging it out

Oh tts great! Perfect for my next Hokkaido trip there. Sad to say I didn’t get to try it previously (as we were always full from all the good food there)
Thanks for the information Jamie. Appreciated much!