if you follow Korean news or some idols, or live in Korea, I bet you know about this recent craze over this bag of 1500won chips called the honey butter chips. how did it started becoming so famous? well I’m not sure. but one thing I’m sure of is that Calbee is doing a good job in persuading everyone to long for it by making it a sacred item at the moment. 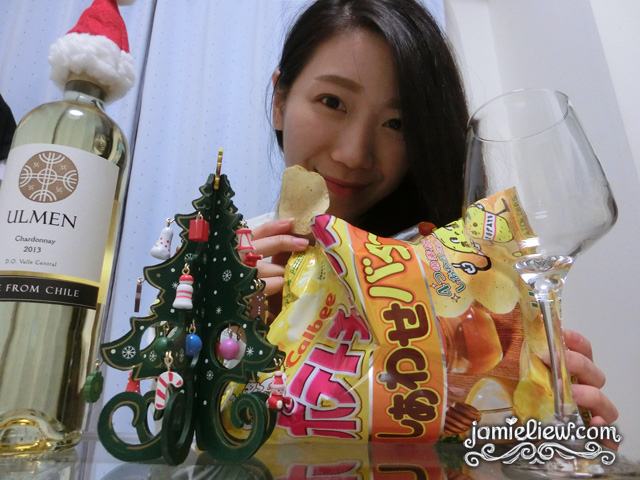 but is this bag of chips really something new? well no it isn’t! guess what? it was on the Japanese shelves in 2012 as a limited edition item. it somehow got to Korea and that craze over it started. I have a feeling that it is just another marketing scheme made by the Koreans but yeah, it is successful every single time. they started selling these bags of glorious chips once again in Japan and I heard it will be on shelves only until.. March. so if you’re in Japan (these chips are just sitting there on the shelves. not very popular really. the Koreans are the ones buying most of them I guess haha.) you might want to try some and see what’s all that craze about. since getting it in Korea is nearly impossible for foreigners like us.

these bags of chips are sold online too for like 60 dollars (for 3) I heard. crazy. please don’t! it isn’t worth it. it costs slightly less than 200yen so it’s about 500won more expensive than the one in Korea but hey! it has around 2 times the amount of chips! I couldn’t even finish it. =S. left it OPEN on the table and finished it the next day and it was still crispy.  I don’t want to know what it’s made of to be crispy for so long.

I made a video review so… here it is! I don’t really make videos haha but I thought you guys might want to know how dorky I am and also how un-glam I am. and also how I sound. that disgusting flu voice. haha.

I might sound like the chips don’t taste very good. it was really good. but I just thought that it isn’t worth the effort and money (and many of my friends whom have tried it thinks similarly. haha). it has a very nice blend and the right amount of sweetness so I guess that’s why people like it. BUT STILL, it isn’t as good as Kobe beef and it doesn’t make me fly while eating it. it’s a good new combination. but it isn’t heavenly like certain food. or maybe because I am not a big fan of chips myself. but since I’m in Japan and these chips ARE good. I’m going to eat them every alternate day until I get so sick of it that I’ll never crave for it for a loong while =P. I gotta admit it’s pretty addictive but there’s just no way to finish the whole thing myself haha. 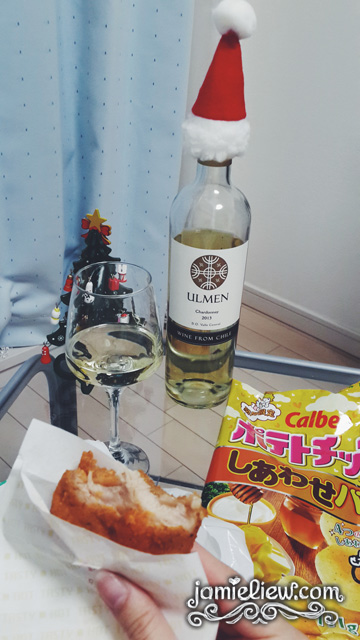 so for Christmas, I had chicken (convenience store chicken are pretty good here!), honey butter chips and a bottle of wine. couldn’t even finish half of it though ><“. bought it because the wine bottle hat’s so cute =D. fell for the Japanese marketing scam le sigh.

well before you think my Christmas was all lonely, let me introduce you to my twin sister. 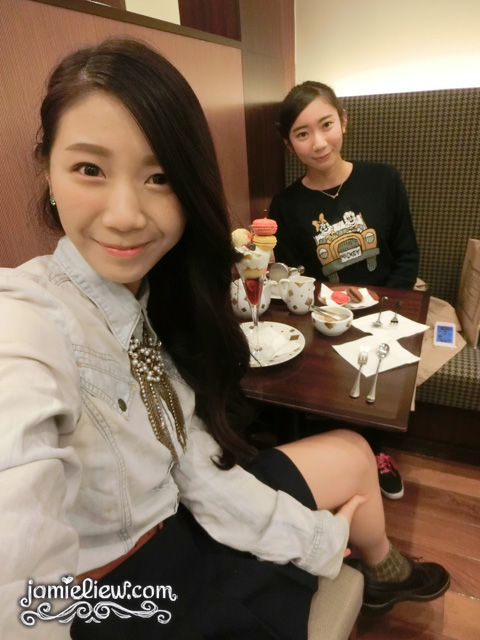 there’s only one Jamie in the picture. the other is my twin. haha.

well, not biologically, but somebody tweeted that this girl looked like me. and SHE REALLY DO. so I contacted her since I was going to be in HER city! and we met for the first time in Christmas, it was like meeting a long lost sister I never knew I once had. she’s Japanese but her Koreans sooooo good. she’s super cute and chatty =D for once I think I really do want a younger sister. 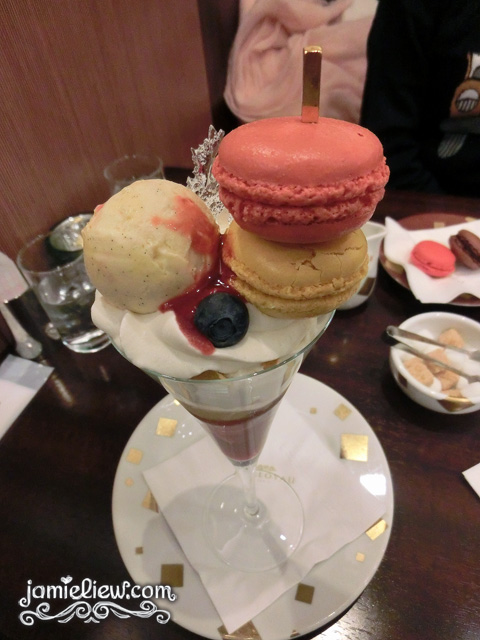 we went to this beautiful french dessert cafe at Dotombori (Osaka) called Dalloyau but… to my disappointment, I have to say that this particular shop which is said to be famous for its macarons wasn’t even on par with the normal macs in Seoul. U_U. most desserts in Japan was very delicious and even the ones from the convenience store wow-ed me. either that it’s really mediocre or this is the way Japanese people like their Macaron. bland.

back to my twin sister, here’s more for you to compare. 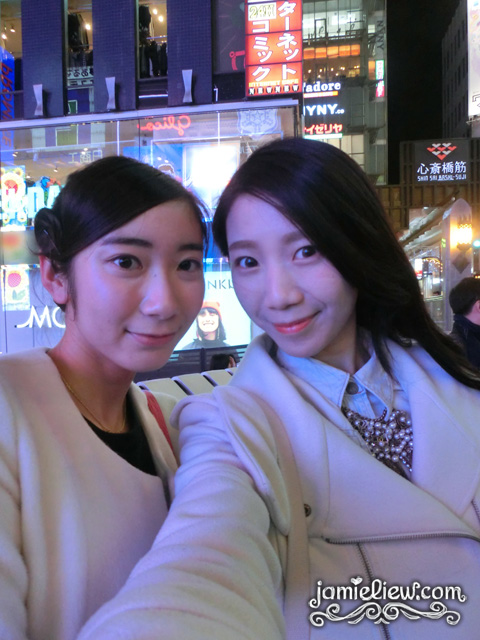 we don’t look exactly the same of course. even real identical twin sisters differ as they grow. but you can definitely see the similarities! 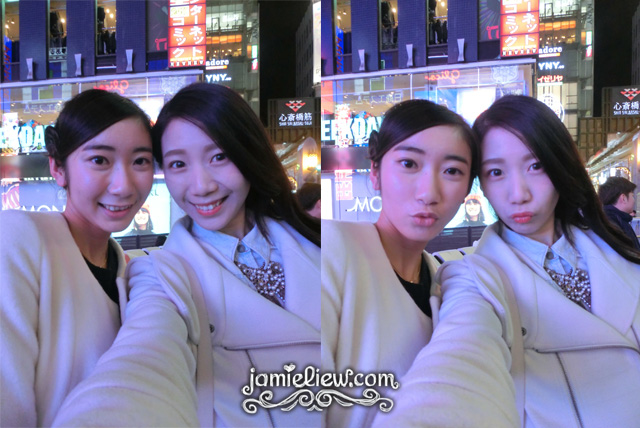 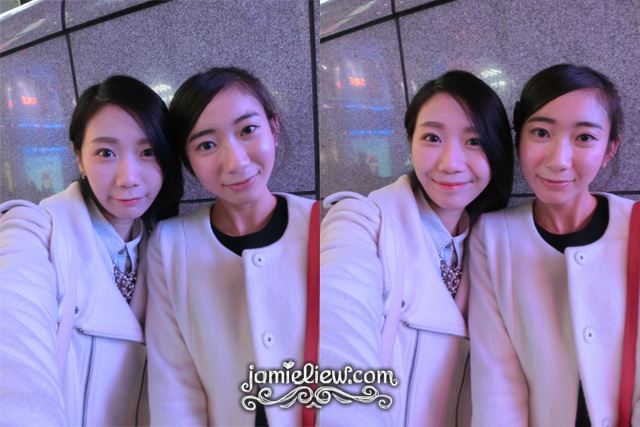 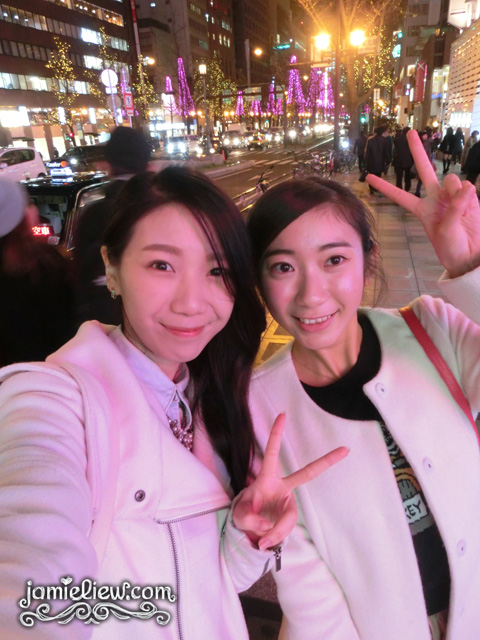 Osaka was beautiful on Christmas day. Seoul was as well. but I had no time to explore it and blog T_T. but Seoul’s beautiful places are.. quite limited hahaha. places that I don’t usually go >_>. 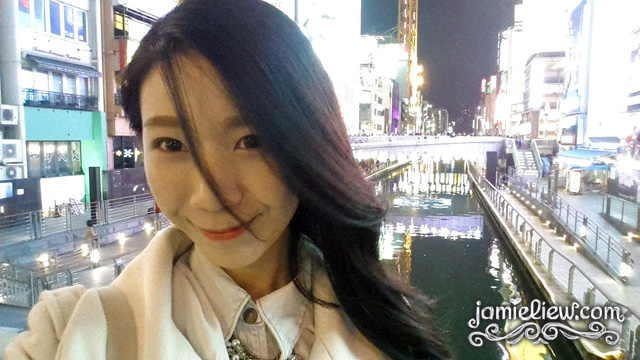 you can’t see the decorations but there were snowflake illumination above the river! 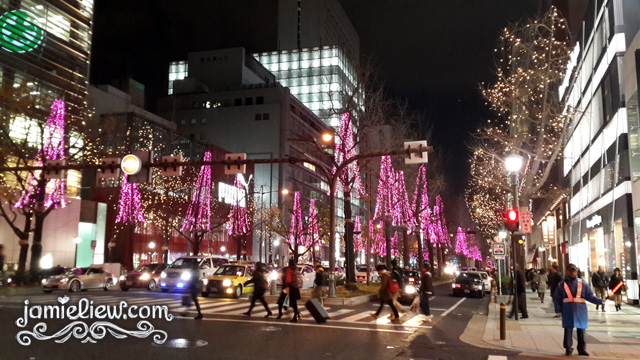 and moreeee illumination. basically the whole SUPER LONG street looked like this. my friends in Tokyo uploaded pictures of the decorations there too and it was just so… pretty <3.

you can’t see it in the pictures but I find it really fun of them to wear santa outfit *both guys and girls* on Christmas. many of them did. I saw at least 20 of them but I was too shy to ask for a picture since I was alone and nobody could help me take pictures T_T. but it was super amazing! 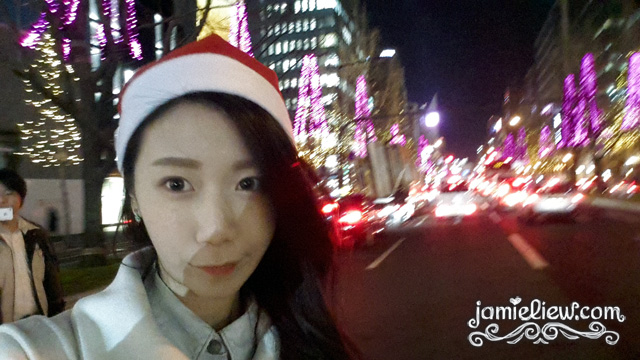 I brought my Christmas hat out so I thought I’d pose for a picture. =X. 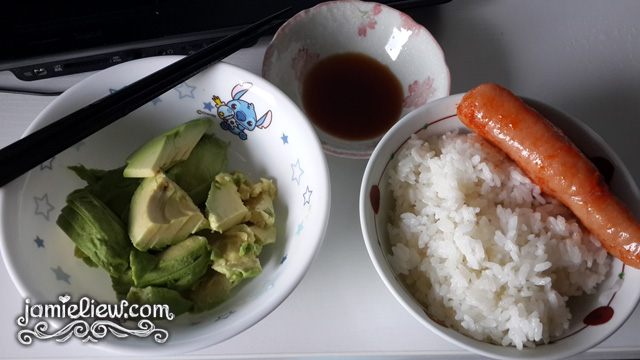 my Christmas lunch. hahaha. I was feeling kind of sick in the morning so I woke up at noon =X. and in Japan, you eat your avocado with ponzu! or that’s just me ><“. but that mentaiko was the highlight. when it comes to Mentaiko? the best’s the spicy ones from Fukuoka! 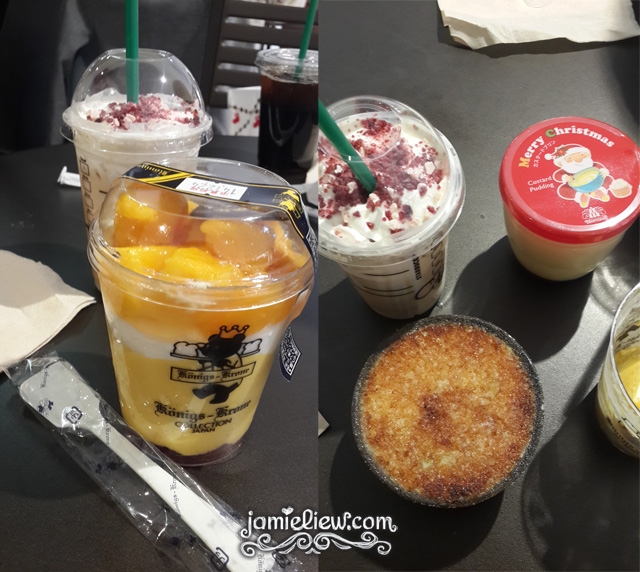 Japanese people have this thing about eating cakes on Christmas day. I don’t know why is it a MUST. but.. I had my fair share. though they weren’t exactly cakes.. 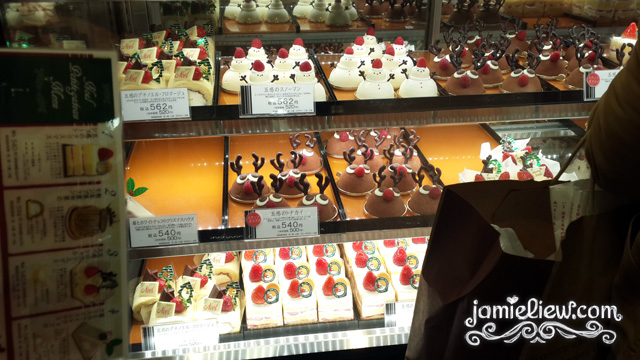 it was too late when I saw these I already bought a handful of desserts. BUT LOOK AT THESE!!! SUPER CUTE OR WHAT?! love Japan when it comes to desserts. they are simply the best ^^.

yeap so that’s all for Christmas. and.. well I went to this new observatory in Osaka a few days ago called the Harukas 300 at Abeno. I’ll blog more about it next time but here’s a little preview! 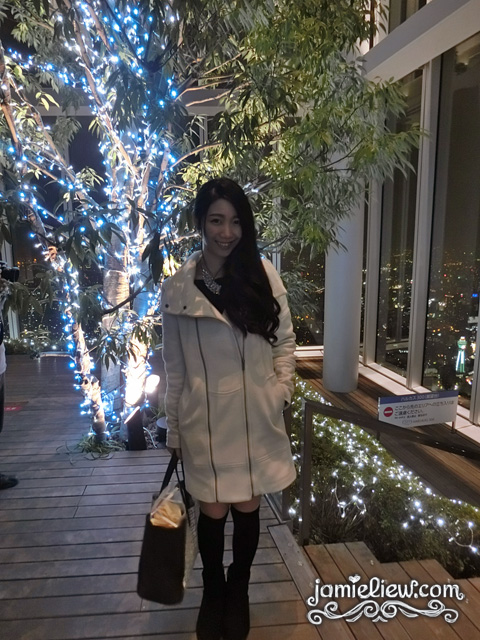 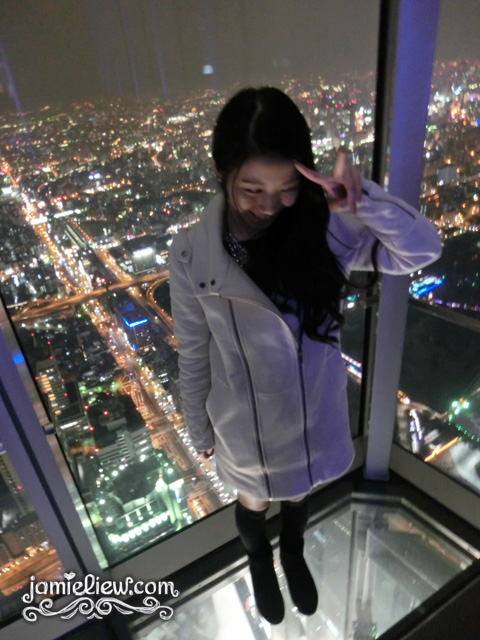 my legs were shaking ><” but the view here’s the best I’ve ever seen. better than the Umeda sky building except the one at Umeda have a nicer building. and it was much cheaper too (7 dollars). Harukas was like 15 dollars T_T. 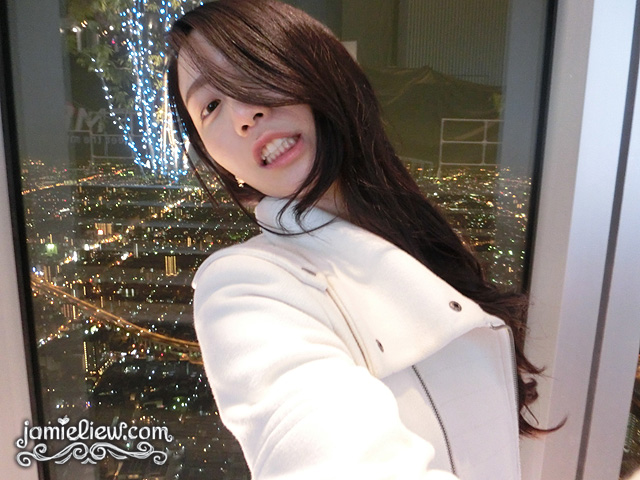 Hey Jamie.
Speaking about video clips. I saw your video with your Malaysain friend, you were acting as a damsel-in-distress in that video. It made me laugh. Surprisingly, I was expecting for you to have a sweet and tiny voice, but your voice suits you though. XD

And that long lost twin sister of yours really looked like you in the first picture. 😀
Merry and Christmas and Happy New Year!