hello everyone! I bet the title totally captured your attention. despite of not having much time to blog, I MUST blog about this experience as soon as possible before I forget about it. I’m super forgetful T_T. 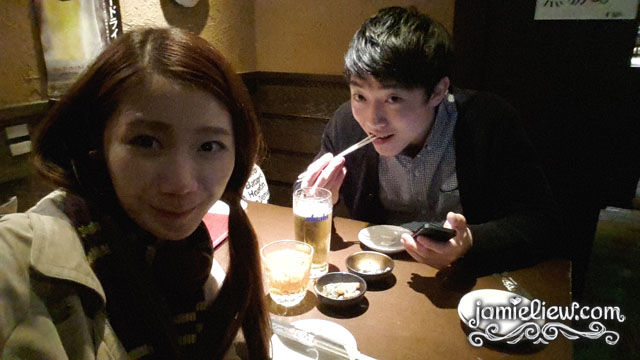 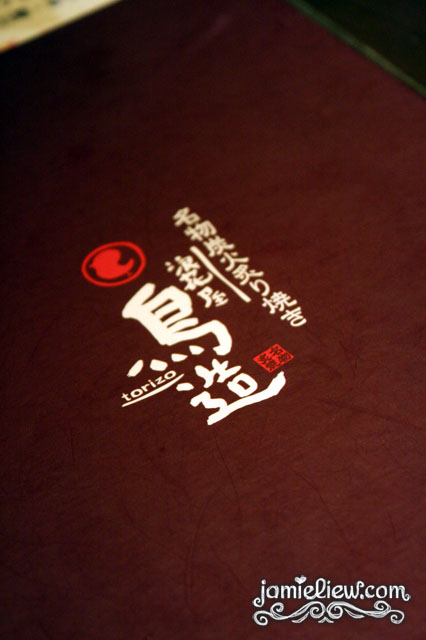 I have been looking for horse meat sashimi (which is super ex so I still can’t afford it pfft) and chicken sashimi for the longest time and Mr. Korean brought me to this chicken place called Torizo. it’s located near Starbucks at Dotonbori, Namba. Starbucks is kind of the corner shop? of the left side I think? and Torizo is on the right side. they are both facing the Namba river. but a block inside.

a little about Torizo, this place sells EVERYTHING related to chicken. so if you’re a chicken fan.. this is your place. it isn’t a restaurant though.. it’s more like.. an Izakaya (a Japanese drinking place) which sells chicken sides. 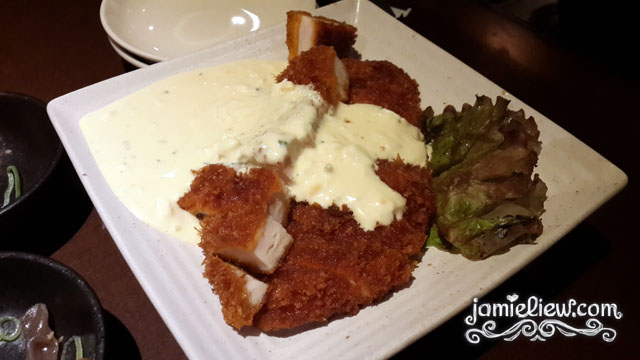 the first dish, fried chicken cutlet! I don’t know what they did to make the chicken so soft inside. and that mayo sauce with eggs. yum. I hate fried food but this was yum. 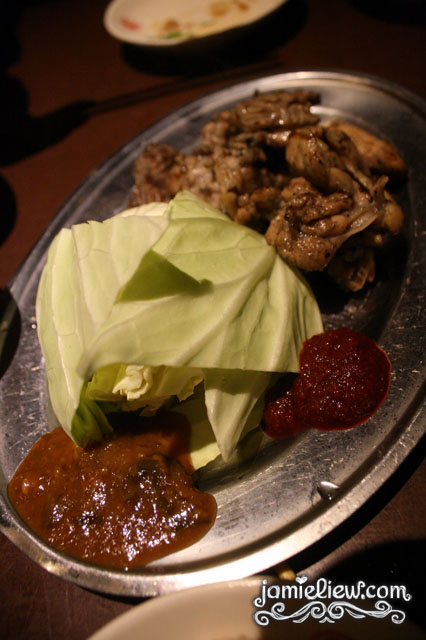 next, this dish looked pretty Malaysian to me. however, it doesn’t taste that Malaysian. you dip your chicken into the sauce and wrap it up with that raw cabbage. that chicken wasn’t exactly very cooked and I think it is supposed to be that way so it can be a little chewy but gosh it was really fragrant. 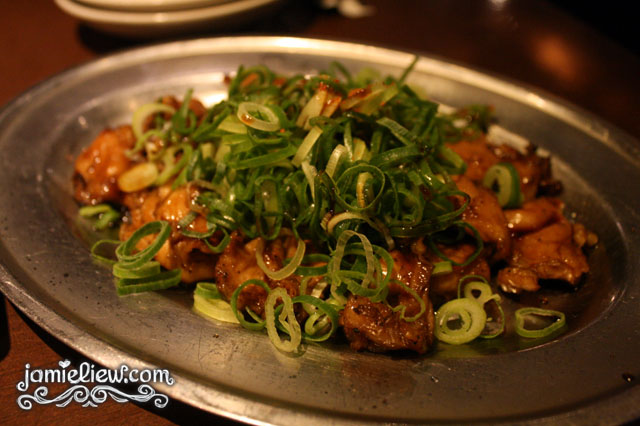 then, we had some stir fried chicken which tasted most.. Chinese/Malaysian to me. it was almost like the taste of home. mmm. up till this point, everything was pretty satisfactory and I was happy. and then….. the main dish came. or should I rephrase it to the dish I was looking forward to the most. 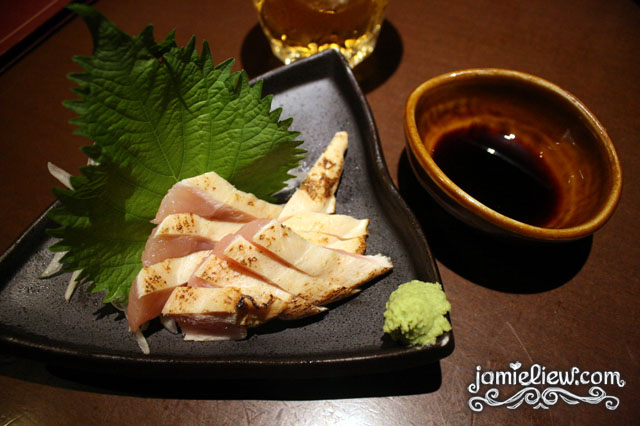 chicken breast sashimi!!! yes it is literally raw chicken and only the sides were slightly cooked. you are supposed to eat it with the wasabi first slabbed on your raw chicken then dip it into the sauce. it’s more delicious like that.

and that drink behind was my Umeishu. I normally drink Umeishu at Izakaya’s hahahaha. they are so yummy! 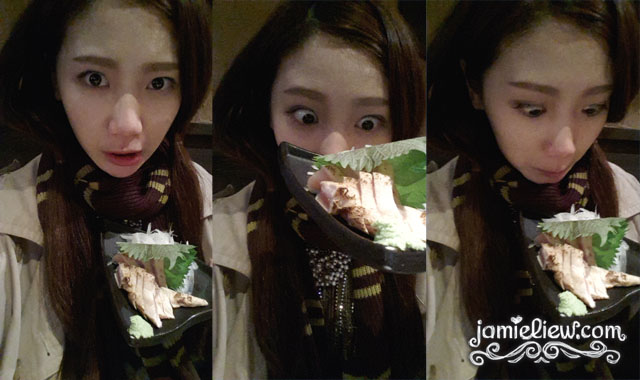 as much as I’ve wanted to try this, having it in front of me made me question myself if I should eat it since I grew up thinking that eating raw chicken will make you sick. and that you should wash your knives after cutting up raw chicken before using it to cut the cooked chicken to avoid that slight raw chicken bacteria on your cooked chicken because that’ll make you have a diarrhea. in Malaysia, we were all taught that raw chicken cannot be eaten.

but nevertheless, I believe in Japanese people as this is the NORM for them. so I tried it.

I spent a long time trying to figure out what kind of chemical reaction was going through inside my mouth but I came to the conclusion that this tastes a little bit like tuna sashimi. and no, it does not taste like chicken at all. again no, it doesn’t have that weird chicken stink when you walk pass a chicken store in the market. and I have to admit that.. it tastes pretty darn awesome. I would actually like to have more of it. really. 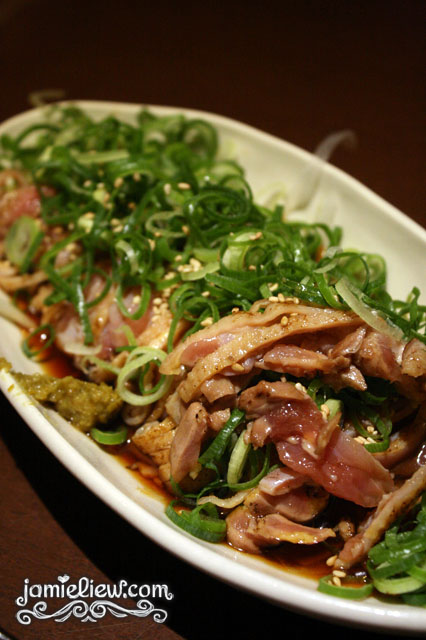 and that was not all.. for double of the price (the one above was around 5dollars and this was around 10dollars), you can get chicken drumstick sashimi. I liked this one a lot too. it tastes very different because of the marination too but because I have a very weak jaw I could barely finish half of the plate above. the skin was very chewy (and crunchy at the same time. don’t know how to put it.) but heck it was really good. the wasabi for this was a little bit mustard-ish and the sauce was a little sour with a tint of bitterness. and raw chicken? it was sweet.

how can raw chicken be sweet?! or was it not sweetness which I was tasting.. hmm. well, just gather some guts and try chicken sashimi if you’re in Japan! very good experience =D.

Is it usual to eat raw chicken in Asia?? Because in my country, eating raw chicken will give us food poisoning.