travelling in Korea but is sick of Korean food already? or have you been here too long that you’d like something else?

well, how does Mexican taco’s sound like to you?

recommended by Koreans who had lived in Latin America themselves, Gusto Taco is as close as it can get to the original ones in Mexico. 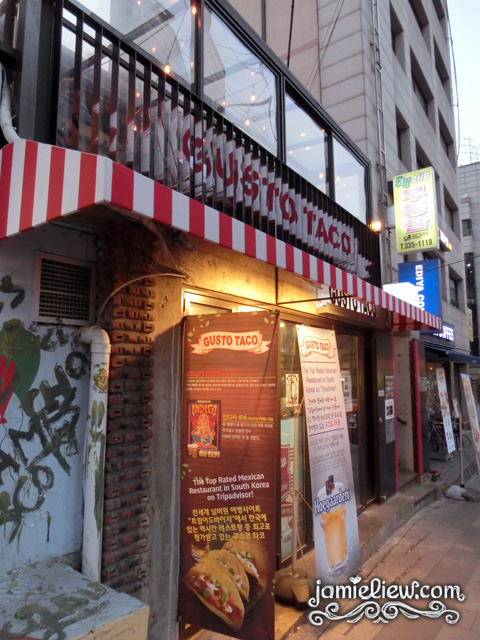 located near Sangsu Station exit 1, this place isn’t difficult to find at all. just walk straight amongst the row of cafe’s and restaurants and you’ll definitely see it! 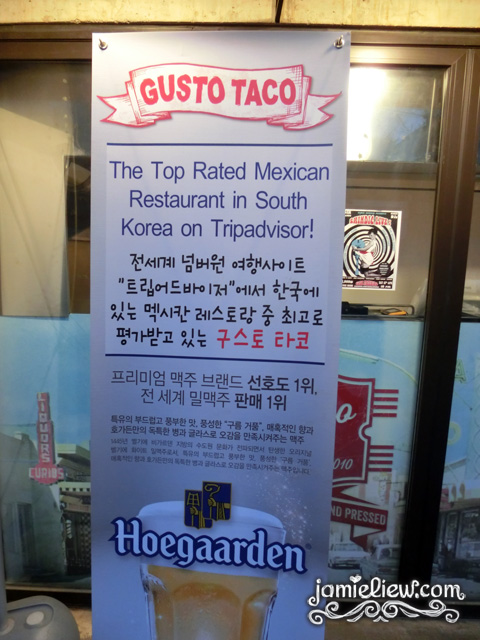 no doubt Gusto Taco is awesome as it is also the top rated Mexican food in Korea according to Trip Advisor! 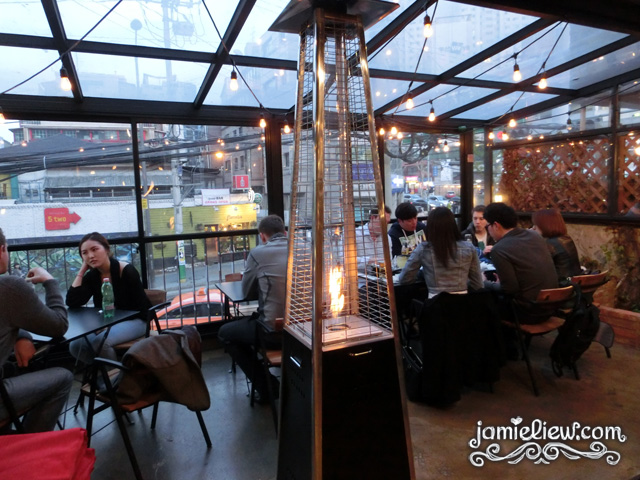 the outdoor view had a really nice atmosphere. really liked it. cozy and romantic =D. 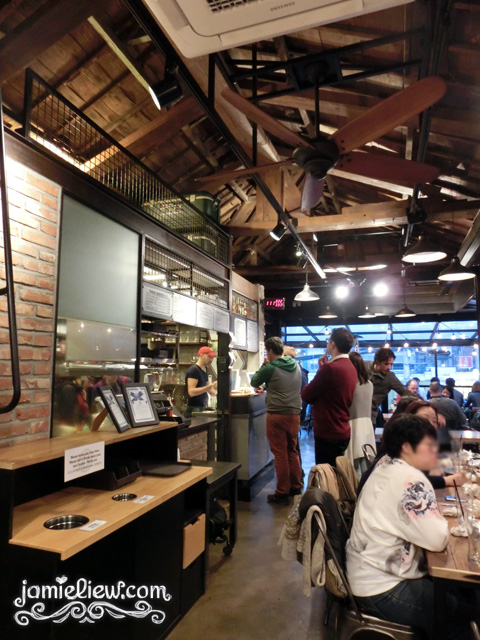 whereas it’s just very casual and pretty inside. 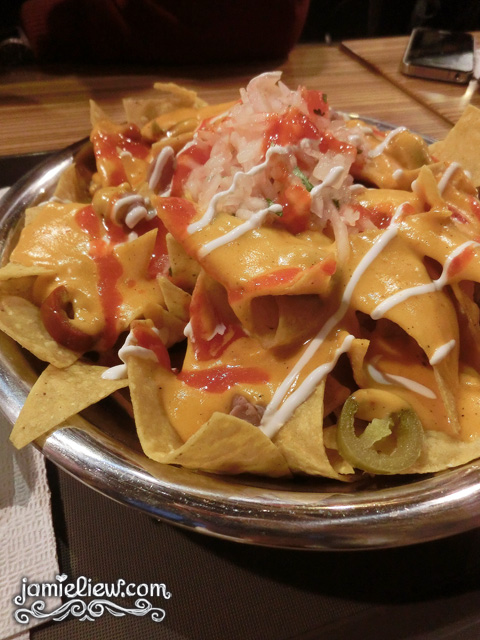 we ordered a plate of Nachos with amazing cheese and other yummy Mexican style toppings. =D. don’t remember the exact price but taco’s in this shop ranges from 9~23 thousand won. 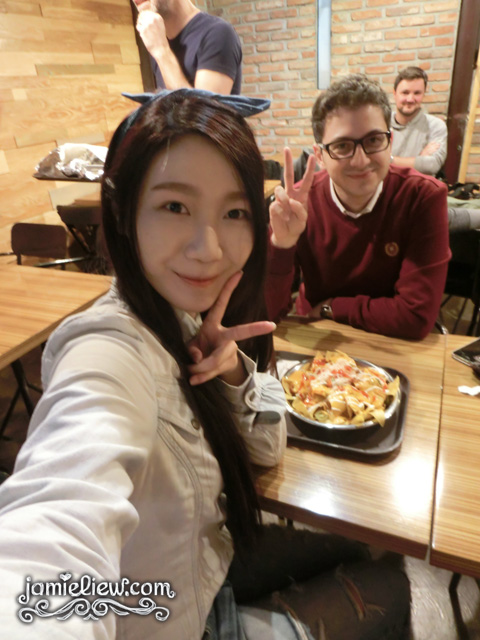 meet my oppa! Kemal! (and the white guy smiling at us behind!) he’s so famous the white guy sitting beside us recognized him and asked him if he works at XXXXXXX store and said he’s actually well known amongst foreigners as the “foreigner who speaks Korean really well.” so proud to have such a famous friend! hehehe. Kemal used to sit beside me in class when we attended Yonsei Korean Language Institute and he had always taken good care of me in class =3. blessed to have such a lovely friend. oh! he probably writes better than me in Chinese. such a multilingual Turkish guy! 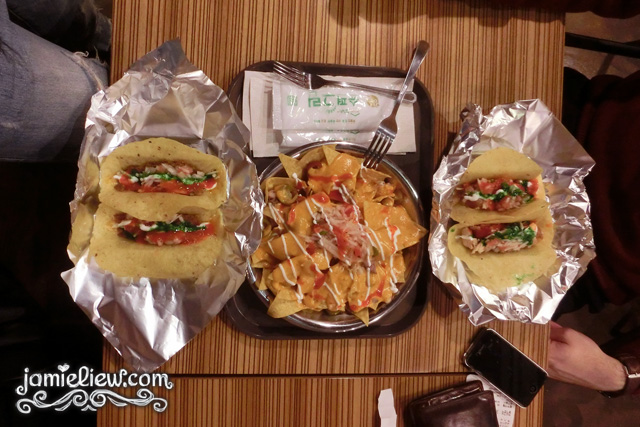 and here comes our tacos! ordered beef. it was SO GOOD. you can add extra chilli sauce if you want to if I’m not wrong. so so so so so good U_U. the nacho’s was good enough but you MUST try their taco’s. I kind of like Vatos’ creative mix but this is yummy in another way. I had never been to Mexico so I’ll never know what’s authentic but this seems to me like the authentic version. while Vatos’ tacos are good because they have a Korean twist and it’s special like that. 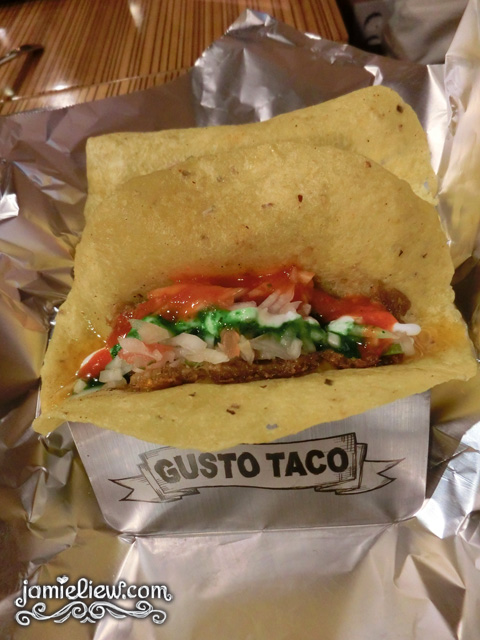 look! look how yummy it is! it’s quite pricey considering how it DOESN’T fill up your stomach. taco’s here costs around 6~7thousand won. 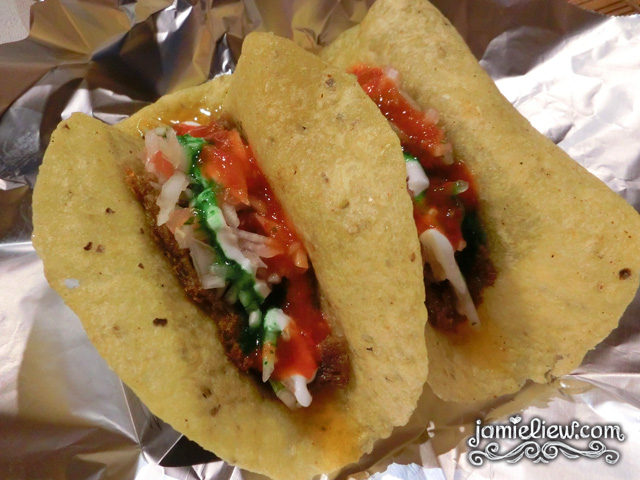 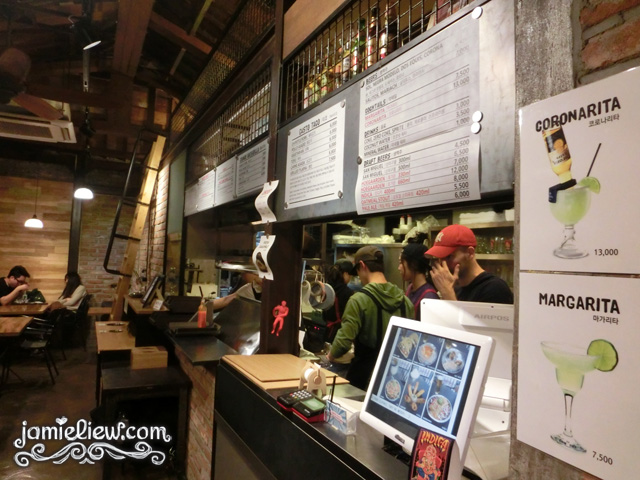 similar to Vatos, they sell Coronarita here. it’s a mix between Corona and Margerita. my biggest disappointment is that they served us Coronarita with NO SHAVED ICE. I mean, I understand that their machine was broken that day but they could’ve refunded us instead if serving us something that even I didn’t want to take a picture of. =/. but as for the taste it still tastes good. 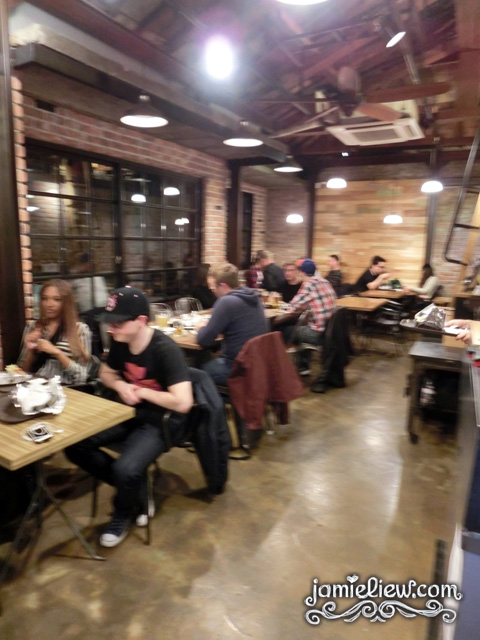 sorry for the blur picture but I just wanted to show you how the other side look. the whole place is pretty filled with foreigners but Koreans who value great Mexican food end up coming here too!

almost everyone’s favourite but with a Korean taste in it. it is slightly more expensive Gusto Taco’s and also a little smaller in portion for the tacos but great quality. 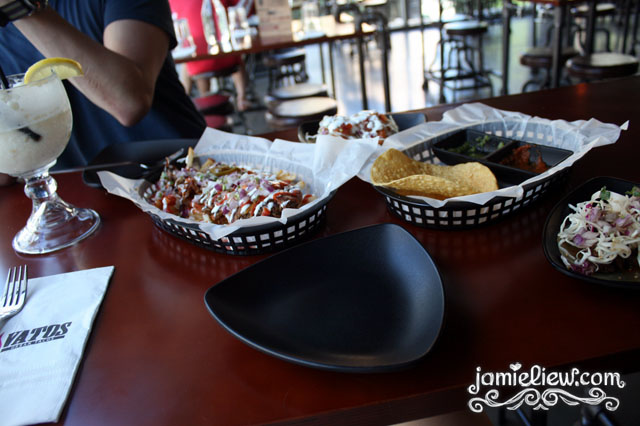 I personally liked the design of the restaurant. they have one in Itaewon, one in Garuso-gil (above Giordano) and another one in Galleria’s food court. every table is served with free.. chips? with some salsa sauce. but what I really liked was the peach margerita (I think. whatever it was, it’s peach and it has an alcohol version.) WITHOUT alcohol. it was cheaper without the alcohol but the original price was 14,000won. they also have a super wide range of drinks (you can check it on their website) and drinks where they pop bottles of beers into a huge glass of ice blended margerita. 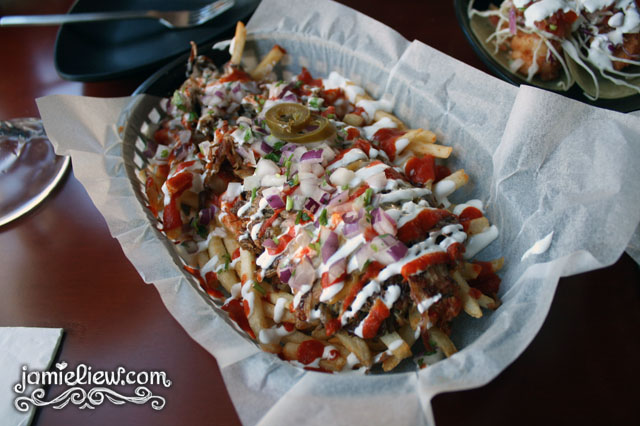 their famous menu is the Kimchi Fries. indeed very yummy but not as worthy when you come to think of it. it’s priced at 12,000won. some of my friends think that it’s over rated but it was really good to me U_U. but of course, I wouldn’t want to pay so much just for fries. (this place is meant for working class adults hahaa) 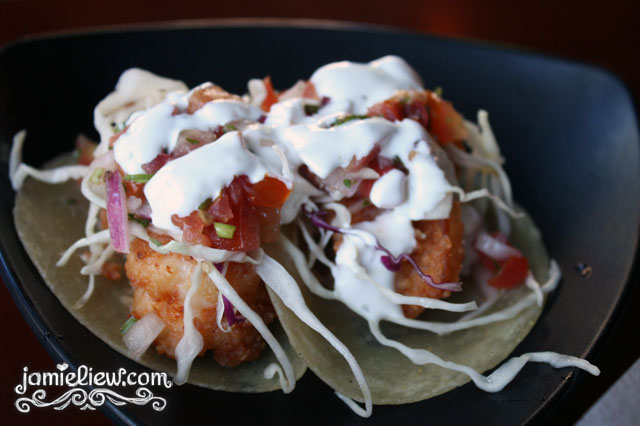 here’s their prawn taco’s. pretty tiny? I can chuck them into my mouth like ssam (meat and other food wrapped in lettuce/vege) and chew them in one bite if I want to. but they are so good I’d just eat them bite by bite. 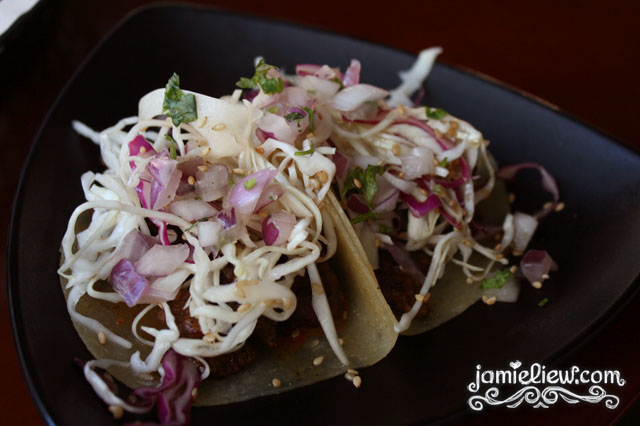 my personal favourite from Vatos would be the Galbi tacos. if you’re going to visit Vatos, make sure you order these yummy Galbi tacos! the Korean fusion is so perfect you’ll be craving for more!

verdict? I liked both Gusto Taco and Vatos but Vatos is definitely on the higher end side (and I just can’t get those galbi taco’s out of my mind!) and something you’ll only be able to find in Korea. but Gusto Taco’s more pocket friendly and tastes amazing. we all know how far Mexico is and personally, I don’t enjoy taco bell. so Gusto Taco would be one of the places you can go to when you have your Mexican food cravings! I’d go to Vatos more often if only it was cheaper.

Thanks for the review on these Mexican restaurants. Me & my boyfriend will be in Seoul around the second week in October & I had already heard of Vatos so we were planning to try it. We like the idea of Mexican-Korean fusion food. We live in southern California so we have pretty amazing Mexican food everywhere we go (restaurant & homemade). It will be interesting to taste what Korea’s version is like.

I believe Vatos is in Itaweon? I always forget, but I think I always see one taco place every time I’m there. I wish I was big on Mexican food, but thank goodness for your review for those who are 🙂