because that is how 순결한 고로케 is directly translated into, PURE Goroke. goroke, or gorokke or koroke, is actually Japanese. fried on the outside and something soft and yummy on the inside. it can be cheese, goguma (sweet potato), vegetables.. you name it. it is normally round and so super delicious. I can never get enough. for a fussy person on fried food, I personally love koroke because they are usually not too oily and it is fried to perfection.

(many tourists may thing that eating Japanese food in Korea is an utter waste of time and money but believe me, this is totally going to be worth it.) 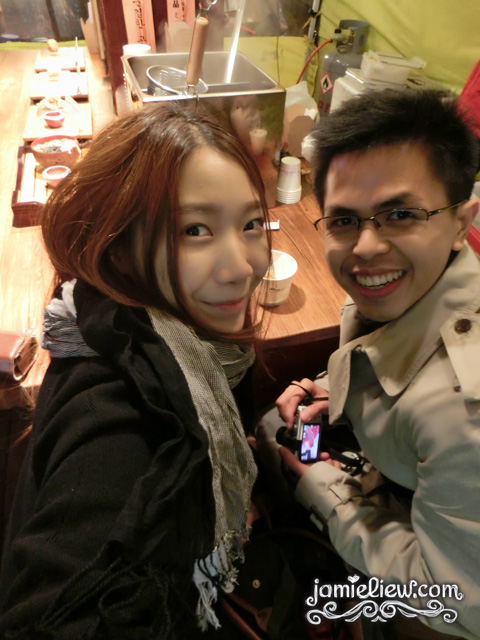 say hi to Paul!!! my long time reader from Philippines whom I’ve met up with when I first came to Korea. yes I treat my readers well =D. but I am so sorry if I had recently neglected many of your emails and all because I am sitting for my finals NEXT WEEK RAWRR. 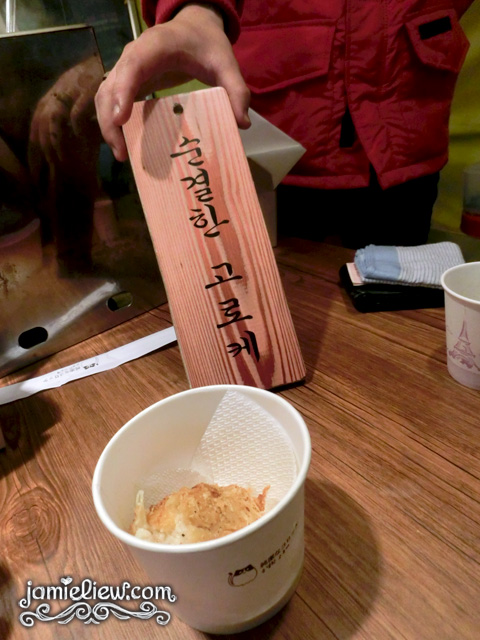 we’ve actually ordered the oyster goroke first but at first we were only hungry and this shop was so eye catching we decided to stop by and have a bowl of fried oysters which was.. BLOODY DAMN AWESOME. never had anything like that before. I mean, in the history of goroke’s that I’ve ever eaten, these are the best I’ve ever had. the one shown above is the prawn koroke. absolutely fabulous. it is made so perfect I kept craving for more. so from just a simple lets have a snack idea, we had almost everything that was sold on this store. BECAUSE IT WAS THAT GOOD. 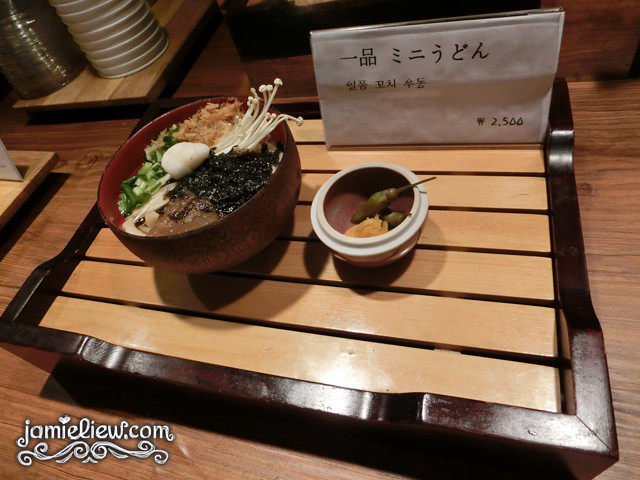 they also serve udon but since we were going for dinner so we thought meh… but because it was cold and he offered us some Udon soup, THIS PLACE HAS AWESOME UDON SOUP RAWR. they put fried goroke flakes in it and a lot of spring onions which made it even more delicious. 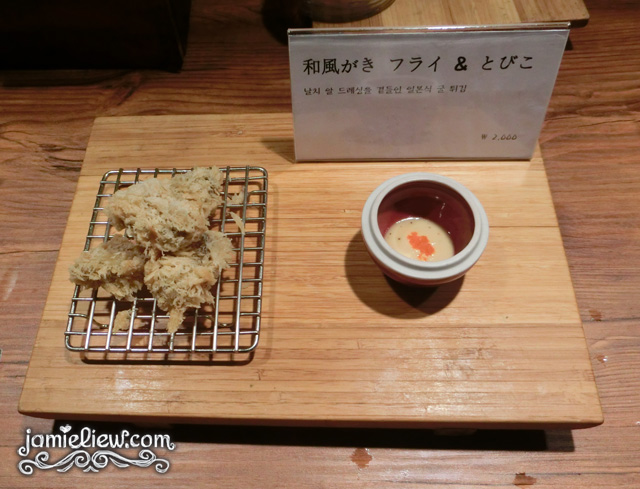 this is what we had the first time! the fried oysters with awesome dipping sauce. not sure what it was but I guess it was mayo something with some fish eggs. but really, if you are a fan of oysters (actually, even if you are not) THIS IS PURRRFECT. for only 2,000won? what a steal! 4 freshly fried oyster goroke! 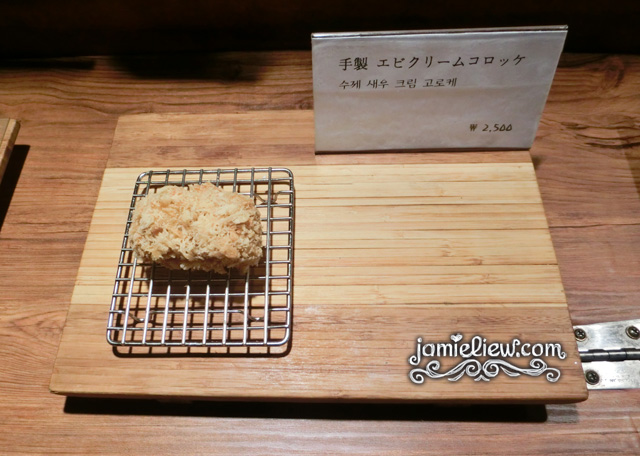 and my other favourite, the prawn with cream goroke. actually, I still can’t make my choice. both of them are SO DAMN AWESOME. it literally tastes like bits of heaven. there is another one similar to the above which is called the potato goroke. the guy who sells goroke personally preferred the potato one but I’d say GO FOR THE PRAWN ONE. it is ABSOLUTELY AMAZING. 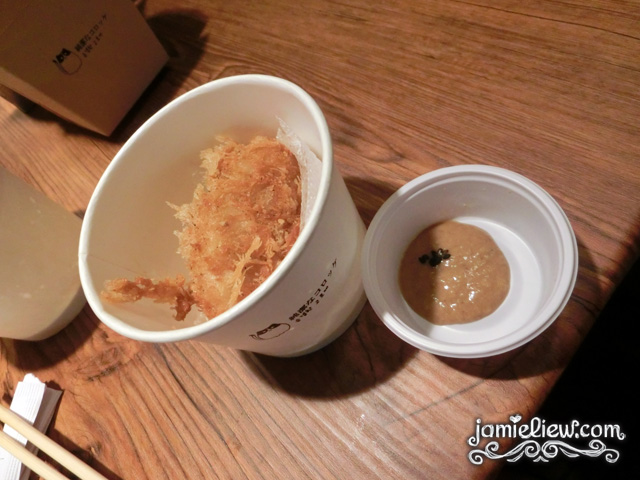 the potato goroke with seseme dipping sauce! this one was good too but I guess I am just not a fan of potatoes. 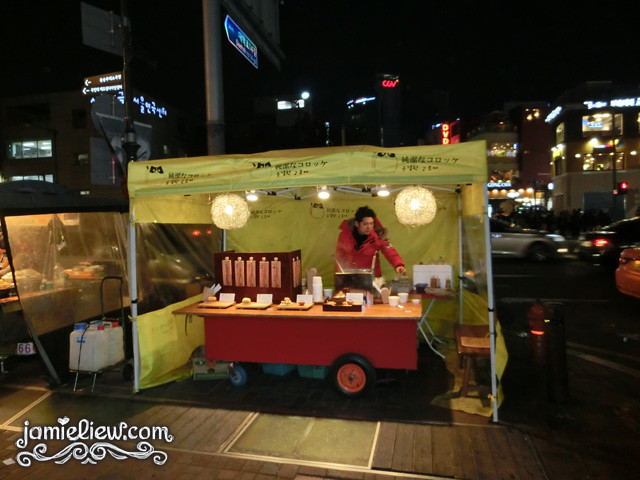 this is how the store look like! it is located across the street from where I live hahaha. basically just get off Hyehwa station exit 1 and walk straight!! I’ve actually eyed on this store because their samples look so damn attractive but I had to rush to meet someone every damn time and eventually forgot about it. but I am so glad I tried it finally! absolutely heavenly! 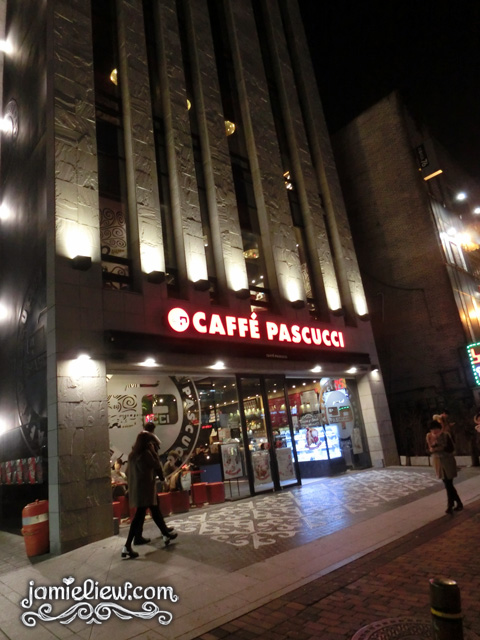 an easier landmark would be Caffe Pascucci. it is right in front of it. or get off exit 4 and walk across the main street and you’ll see it too. hahaha.

Paul isn’t very nice but stubborn, easy-going, and crazy X_x ooooh he’s like an ahjussi in that pic! Lolol!