my title pretty much sums up my whole post for today. since I am having my exams soon so I have not been going out T_T. hence I will need to blog about stuff that are way overdue where I’ve been saving them as fillers anyway. =D. on August, my best friend, Megumi came to visit! I was so glad because we hadn’t met since March when we graduated T_T. she left right after our graduation ceremony le sigh. 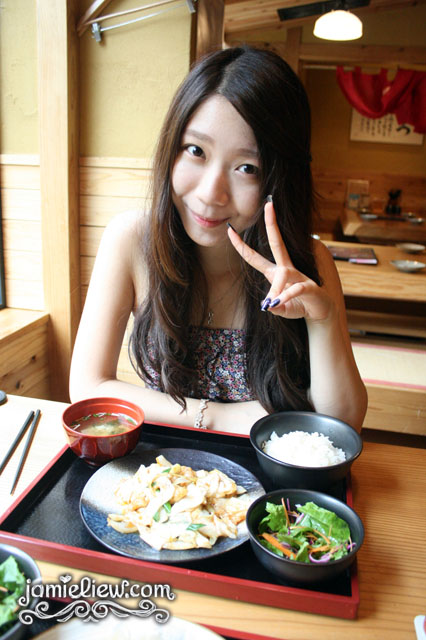 we went for Japanese food after a few rounds of Korean food. the silliest thing is that Megumi insisted on going for Fukuoka food when she’s from Fukuoka! because I love the restaurant and she wanted to have Japanese food with me since we’ve never had it together before. but she said it’s good even for a Fukuokan standard so no regrets haha. 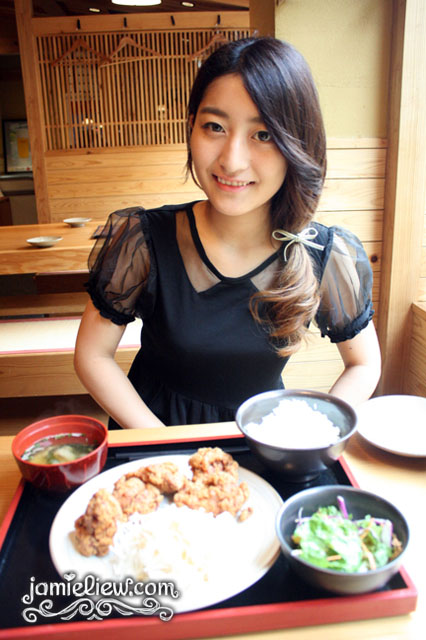 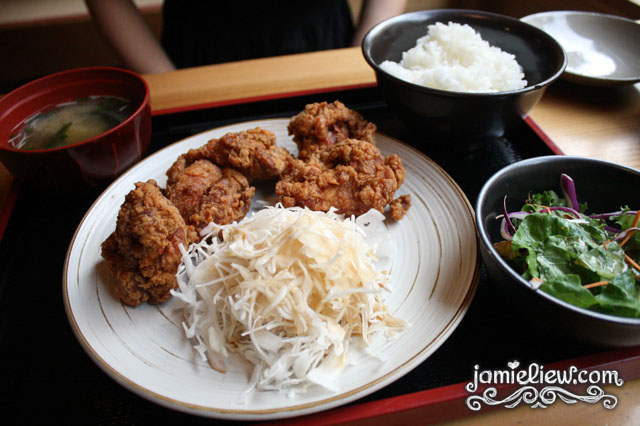 Megumi’s fried chicken set. I’ve blogged about how this great place at Gwanghwamun called Yamaya (type yamaya in my search box to look for it) and especially how they give UNLIMITED MENTAIKO which costs 6,000won each at dinner time. 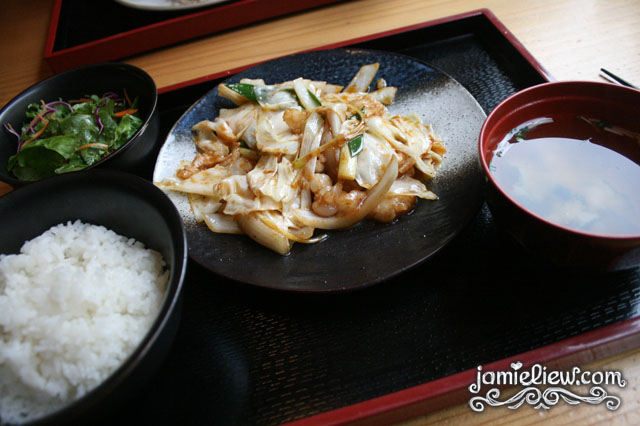 my cow intestine set. I think this is the best set. don’t be fooled by the name. it does not smell and it tastes like butter. it’s sooooo good. although I already like those intestines (gopchang), I prefer them here. don’t know how they make it but it’s simply splendid. not that photogenic though. I had around 2-3 mentaiko’s and Megumi’s jaw almost dropped hahaha. she said it’s only normal to have half to one normally. =D=D=D. well, Fukuoka’s mentaiko’s are spicy while the normal Korean one are not that spicy so.. I prefer the Fukuoka ones even though mentaiko are originally originated from Korea (called Myeongran in Korean). 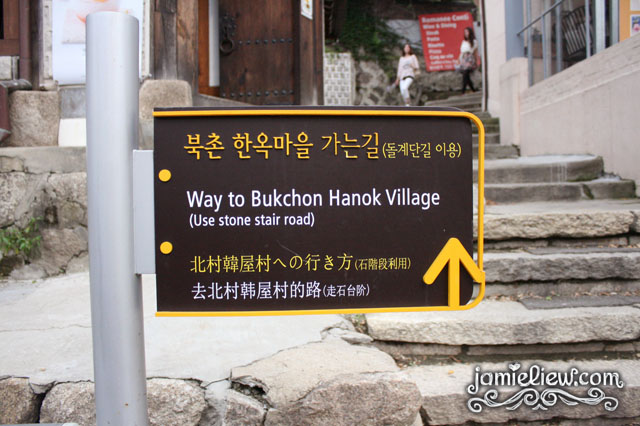 we then hiked up Bukchon because we love Bukchon! we took tonnes of pictures on her phone but bad girl! she hadn’t sent me the pictures yet! 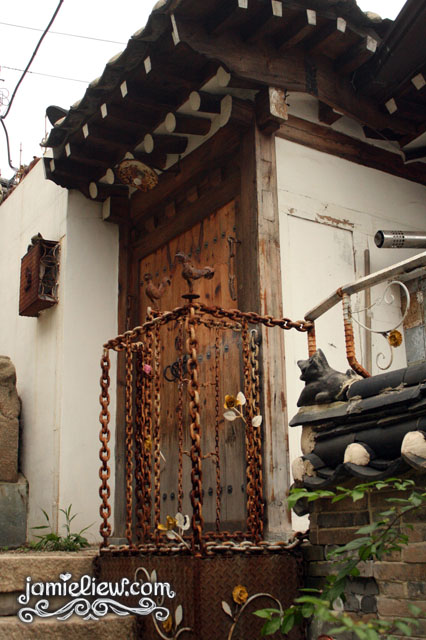 I thought the chain balcony was fascinating haha. 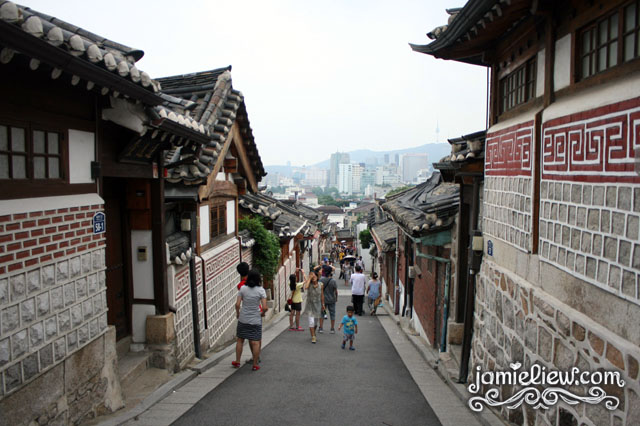 indeed the most beautiful place in Seoul. please don’t just go to the Namsangol (commercialized) Hanok village. this is the place to come. just go to Namsangol for their taekwondo performance =P.

here’s the taekwondo performance information I copied from their site :

I am not promoting this just because my friend is a member of the performance (coughs* which is true) but I’ve seen the performance before and it was REALLY GOOD. keeps you watching. not boring AT ALL. plus it’s FREE! since they are the national taekwondo team, I don’t see how this is not the best taekwondo performance in the world =D. 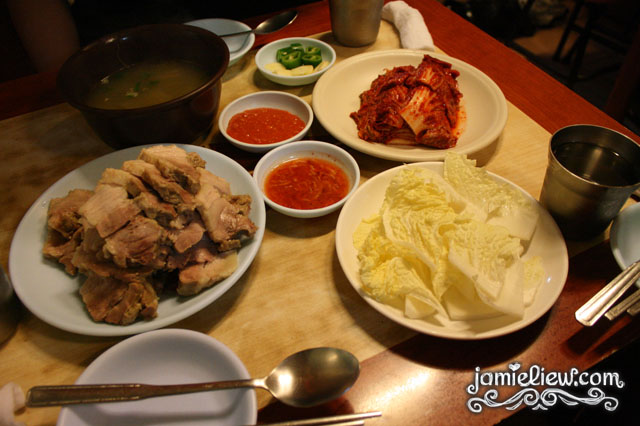 Megumi and I loves bossam. so here we are at the Bossam place. we ordered the huge plate. though it is like RM90/30,000won but for 3 people this thing is bloody filling and satisfying! this was at Hongik Bossam where Mei Sze calles it a hole in the wall place because it’s quite hidden =P.

on Megumi’s last day here, we literally did not know where to go because Seoul is just so small and there’s nowhere else to go. =S. so she checked her twitter and found out about the M.Net Countdown performance at Cityhall. we went there at like 2pm where people camped there since the day before but still got the same spot anyway hahahahah. don’t get why these people like camping so much =P. though we did miss the chance to sit inside as you need to come early to get your numbers. but heck, the show only starts at 7pm or something =_=. we still had to wait for 5 long-no-bathroom-painful-hours. but the campers didn’t get a place inside because they want to dance when their idols come out. 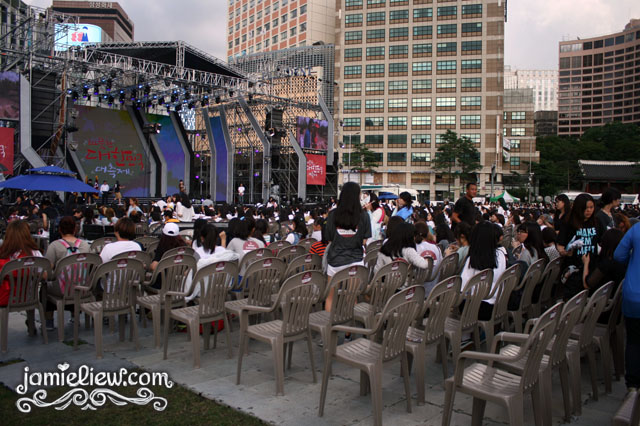 the seating area. heard most people were here since 5am haha. crazy Koreans =S. 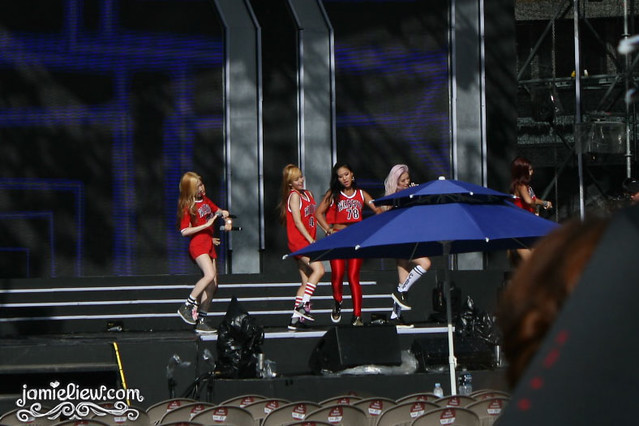 Spica in practice! I think they are Spica. I mean, I don’t know who else in the Kpop scene has purple hair. 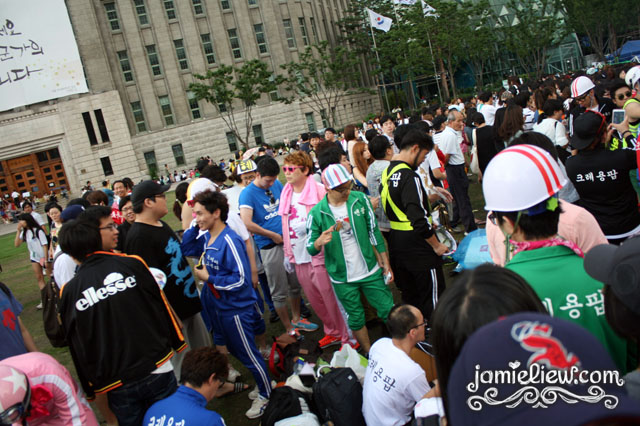 who are these people dressing in weird looking costumes at the hottest day of summer? well, they are the crazy fans of CRAYON POP! I swear I’ve never heard of Crayon Pop before I went there. but I remembered that my friend in the army showing me this video of them dancing and said how cute they were and how all the army boys go gaga over them. but at that time, I was like.. wth when I saw the vid. youtube “crayon pop – bar bar bar” if you are interested. becareful not to watch it too many times because you might become addicted to it and turn into an addict. which Megumi and I are now ahahaha. (shit.)

it is also known that old otaku guys are into this group because they are different. like, they don’t dress sexily and has a very different concept from other kpop groups. which is true. but the cheap production is really.. just too cheap pfft. and it is ridiculously popular here. 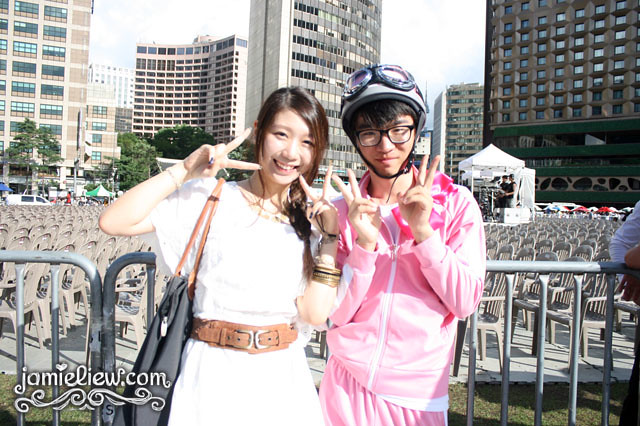 must take picture with the guy in pink! including his helmet wth. apparently Crayon Pop members are very nice and they’d talk to their fans unlike other celebrities haha.

but I didn’t wait for 5 hours for nothing. because I am a big fan of F(x), it is all worth it at the end. because F(x) literally came out at the end. 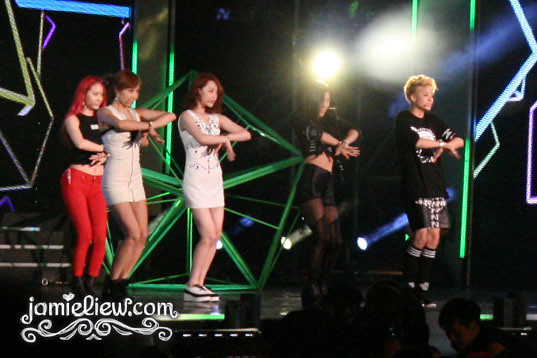 AHHH MY GODDESS <3. love Krystal. and my batch mate in school though I’ve never bumped into her since all my classes are in English these 2 sems and I keep staying at the business building haha. but my friends have all somehow bumped into her or Kang Ji Young of Kara. I’ve seen them from my class before though when they were giving out freebies on the field where my class was facing. but…. stupid class T_T. my other friends saw them up close and shook their hands *fangirlmode*. got an A for that class so I guess my sacrifice is worth it hahahaha. they’re just human anyway.

well I did regret that I know where Justin Bieber and GD was and I was INVITED to that event but I chose to stay at home because my quiz was near. =S. 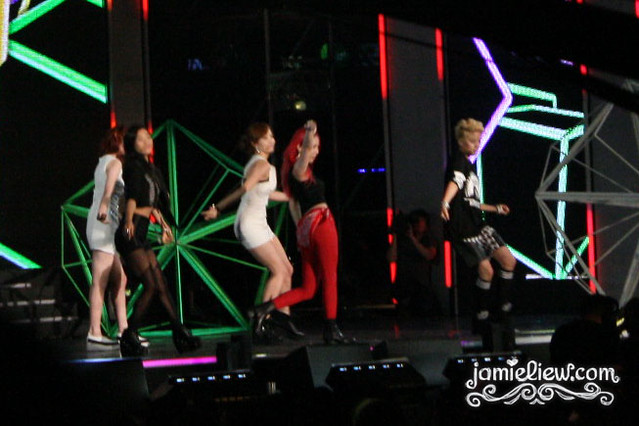 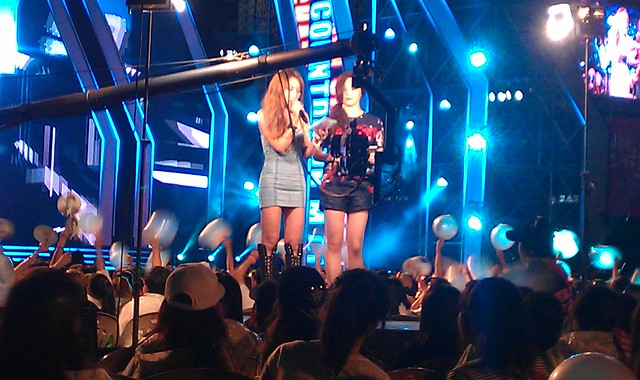 Narsha and.. I don’t know who. but from the same group. it is a pleasure to see Narsha since I’ve never missed singing her songs whenever I visit the noraebang (karaoke). 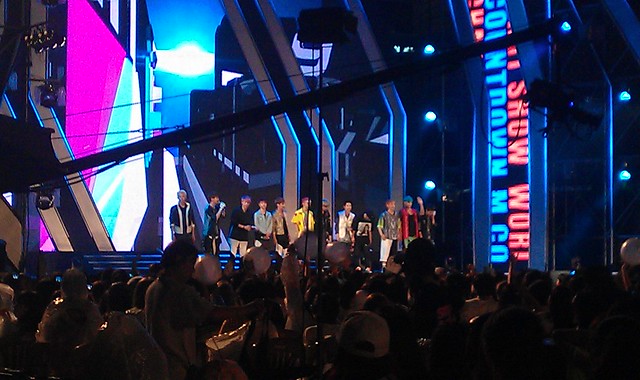 the crowd literally went crazy when EXO came out. before I saw them I was quite like.. “meh.” but after I saw them perform Growl/Eureurong, I am now an EXO fangirl hahahaha. not that I follow kpop or anything but if there’s a chance to see them, I will. their dance is just tooooooo awesome. and and and they performed Growl for the first time live at that time! =D. just saying.

ahh. the day of the event was the day i left seoul T_T how sad..

Cool! The food looks amazing!
Just so you know (Idk if you care or anything :P) but the group in red was Wassup Girls (i think that’s what they’re called) and the girl with Narsha is Miryo. She’s the rapper of BEG!

Really envy you for being able to join this event!! Are you still in Korea? If yes is it any way for us to check what group is performing in M!CountDown for each week? 🙂

I am asking because I’ll be heading to Seoul next week. If there is a way to see who are performing, I would like to add to my itinerary! Please help ask around kpop fangirls if possible. They would know so much more compared to international fans like me..