feels so good to revisit my old school. U.U.. spent one year here so I still have love with it. my favourite canteen and my favourite statue pfft. 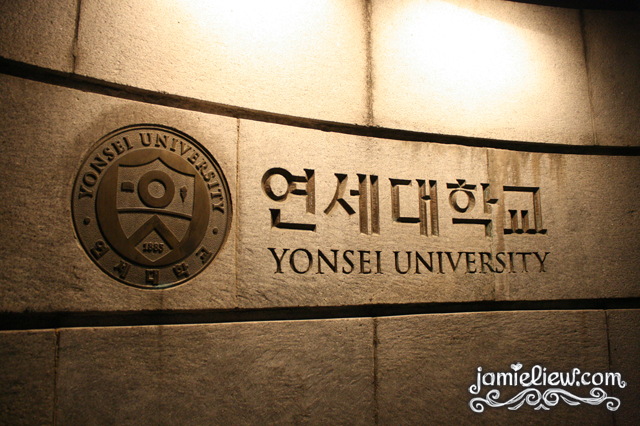 so this time I am back for the festival despite having exams. I MUST  come for their awesome festival which is 2 days before Akaraka was held. 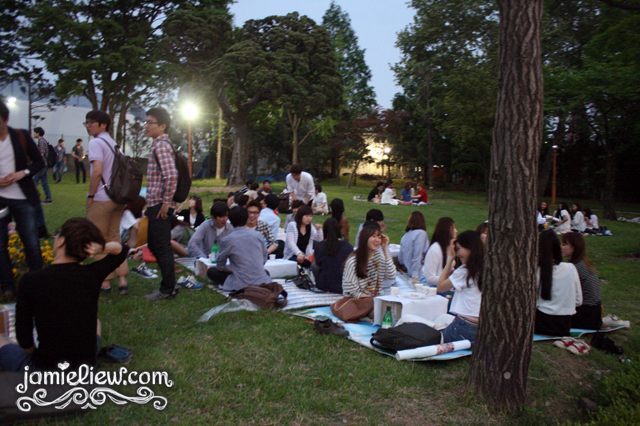 upon stepping into the Yonsei compound you will see students all over sitting on their mats drinking on a box. I myself had never seen this at my school as we lack of grassy lands I guess. but oh well. I actually hoped we had more of these because they seemed so much more special than the normal plain table and chairs hahah. 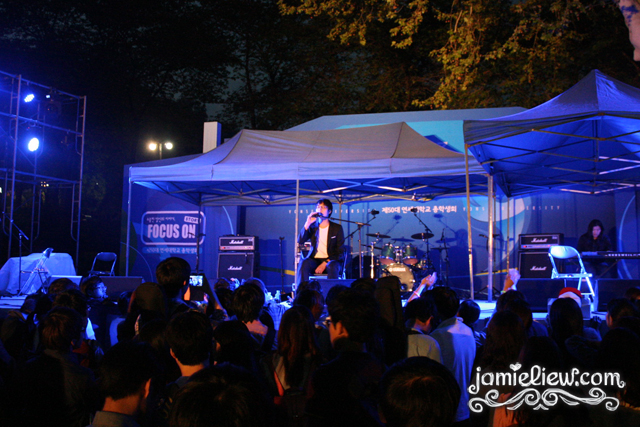 there were 4 bands performing that night and they all had their own styles on each corner. this is more of the Korean-ish one. =D. I heard there are MANY MANY MANY bands in Yonsei itself hence the reason why they have to split their stages into 4 simultaneously. 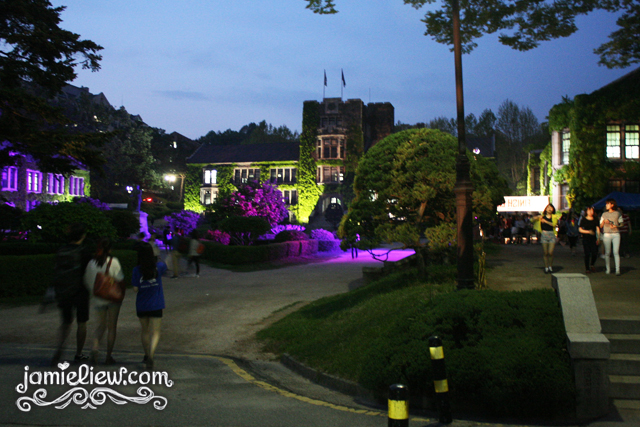 the part which I loved the best. the “Zombie Run”.

they had it starting this year and it was AWESOME. you literally pay to get 2 life strings and you have to run across all the zombies trying to snatch your string. if you passed all the rounds (with grabbing some life potion as well) then you’d be granted with some prize. pretty awesome no? 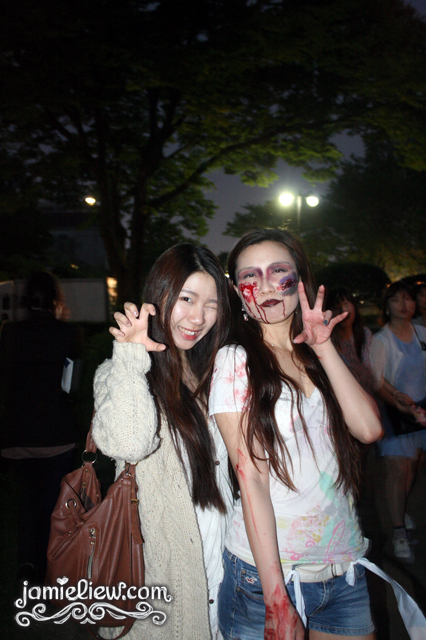 then I saw someone familiar…. the girl whom had always been mixed up with me. from behind. because we had same hair length and colour. and that is Cassie!!! pretty and tall girl from Hong Kong who will be doing her masters here in Yonsei soon =D. 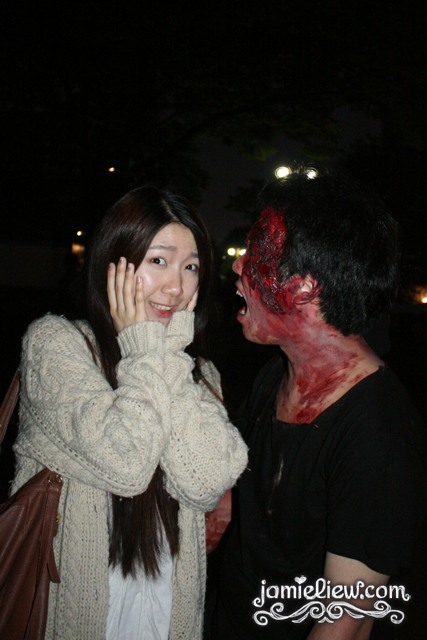 and Geoffrey had one of the scariest zombie make ups. he couldn’t even open the other side of his eyes D=. 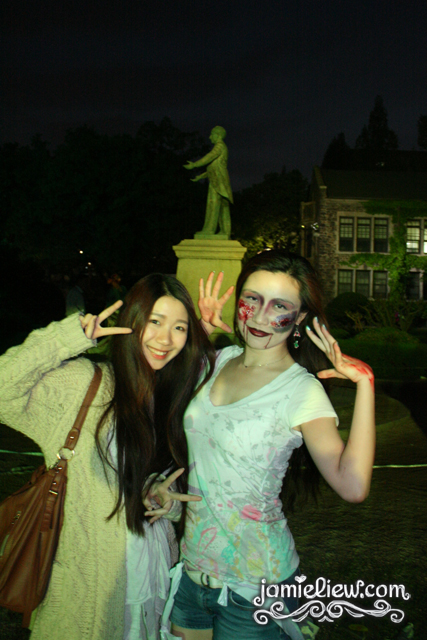 more pictures with Cassie. and the Underwood guy. =D. 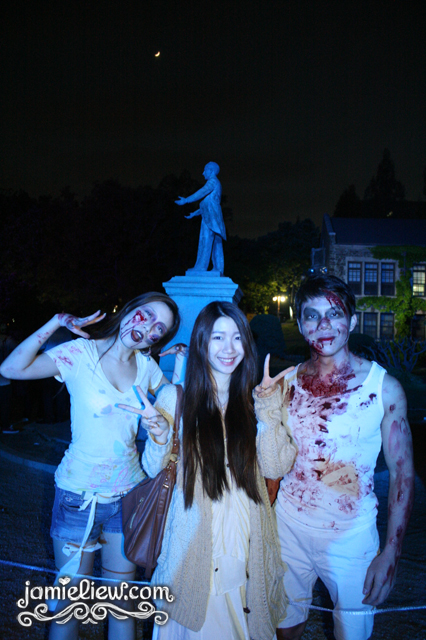 someone recognized me! so I HAD to have a picture with him no? Cassie’s friend from Singapore. he said his friend recommended him to read my blog and so he did. but he didn’t remember my name at first U_U. he just said “that blogger from Malaysia”. plus through the stats I’ve obtained from Nuffnang, I have more Singaporean readers than Malaysian readers sometimes =S. not sure if it is a good thing since I have only been to Singapore once. =S. 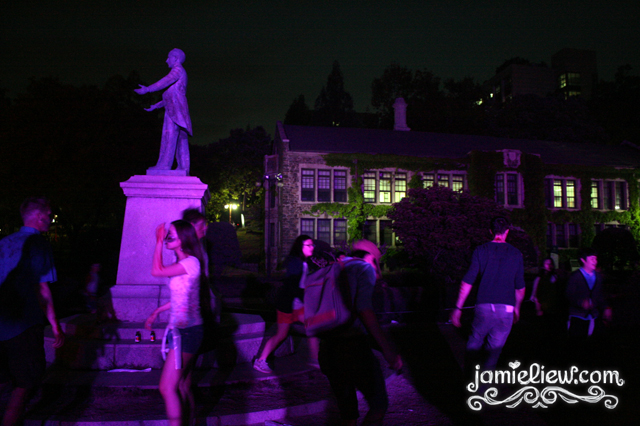 most of the zombies were foreigners as you can just go there and tell them you want to be a zombie and they would let you become one for free! plus they’d put on make up for you. and dirty your clothes. 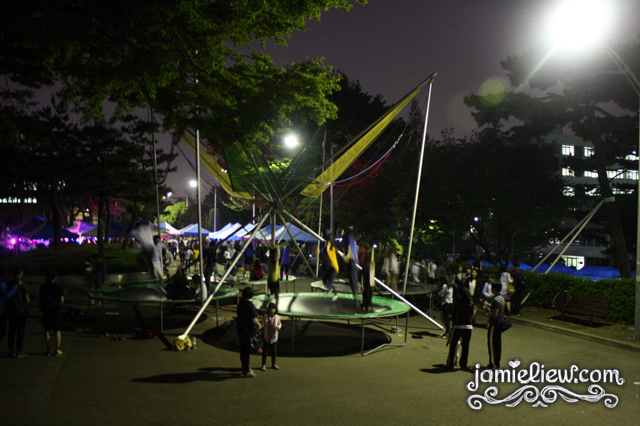 what Yonsei have every year. absolutely love it. =3. 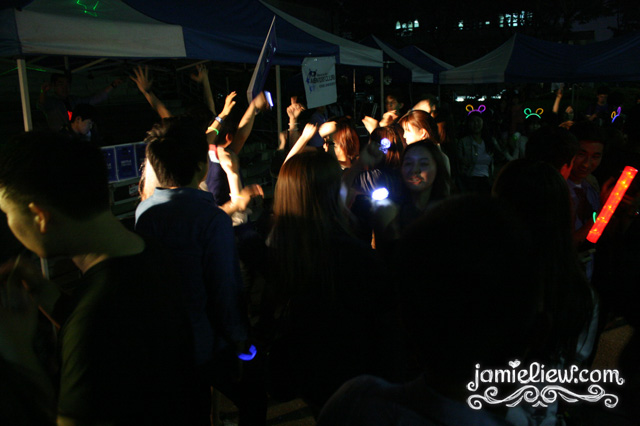 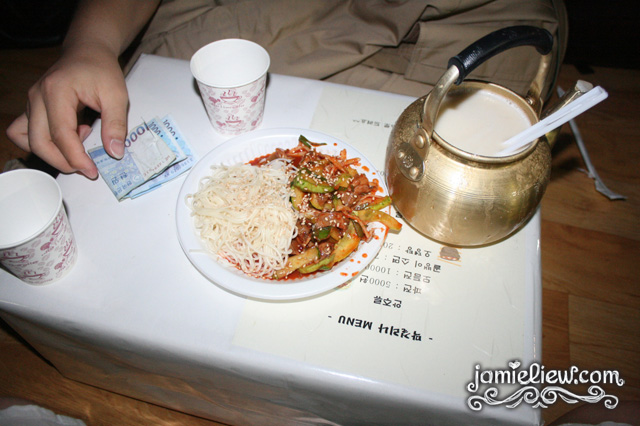 went with Ian, my smart Korean friend who speaks really good english. ordered these super duper over priced banana makgeolli which didn’t really taste good because it was just smashed banana with cheap makgeolli. the makgeolli probably cost 1-2 thousand won. while the banana 500 to 1000won. =S. oh well. as for the “an ju”, side dish which you must order. korean law. we had “gol-baeng-ii”/골뱅이, stir fried spicy snail with noodles =3. yum yum yum. best anju ever. highly recommended. 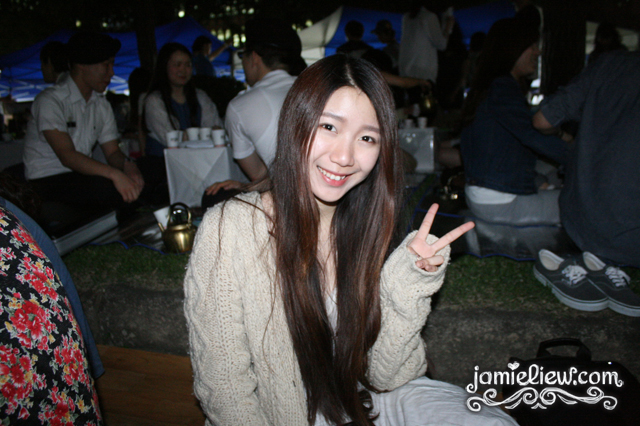 picked this shop because I wanted to sit on the floor and drink with a box table pfft. so Korean-university-style. 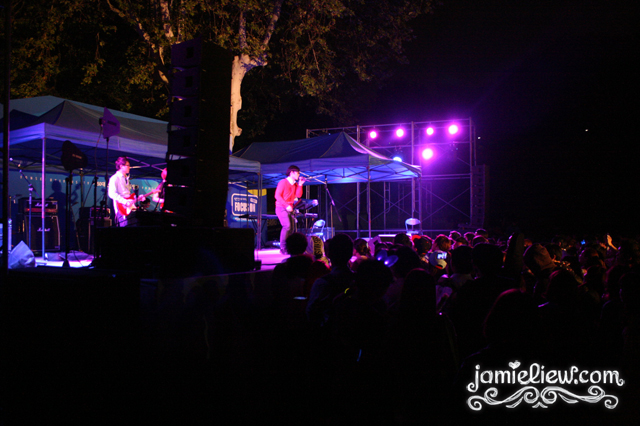 awesome guy who sang the rock version of gentleman. he really did rock it well =3. Koreans can all sing. well not all but like 9 out of 10 of them can sing. hence why in Korean singing contests they do not emphasize a lot on if you can sing or not but how special you are. because Koreans can normally sing. how can they not when they have such a good noraebang (karaoke) culture? they are all gifted with good voice just like the Filipinos T_T. why can’t most Malaysians sing too pfft. 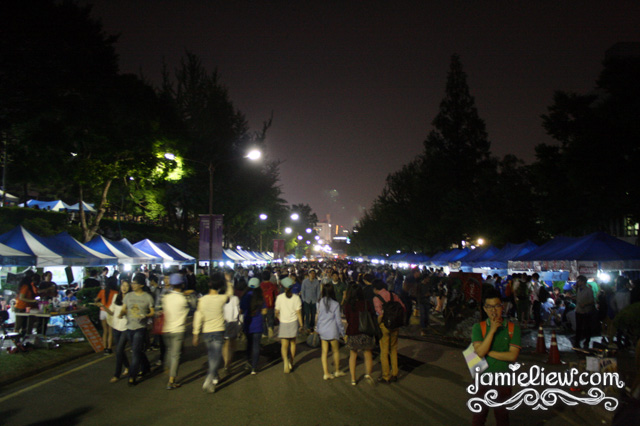 super crowded as you can see. it’s supposed to be Spring but it was quite hot already U_U. the festival was held back in May. sorry for the late post =P. 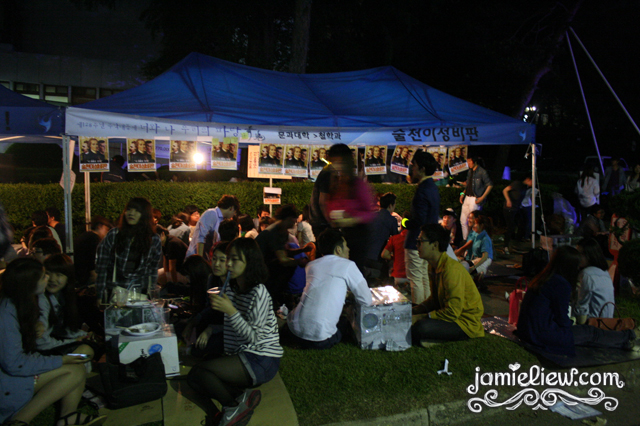 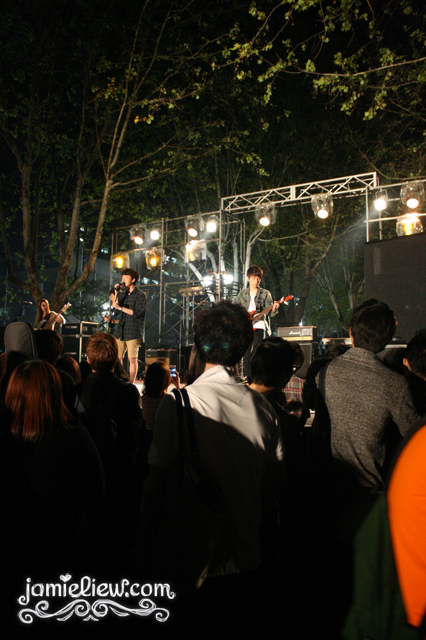 the Korn of Korea. hahaha. 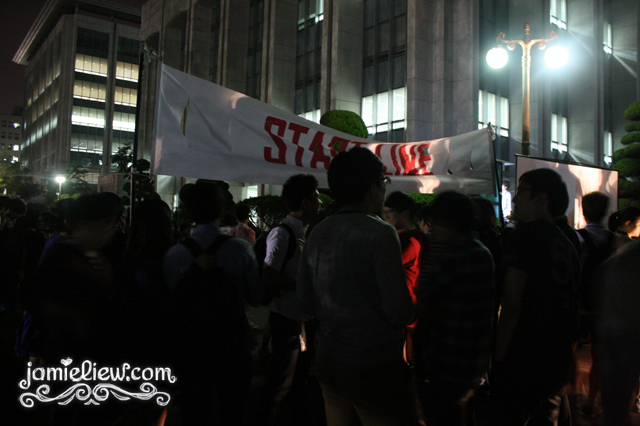 I heard that there was a few stages for the Zombie Run. about 3 to 4 I think? and this is the start point. 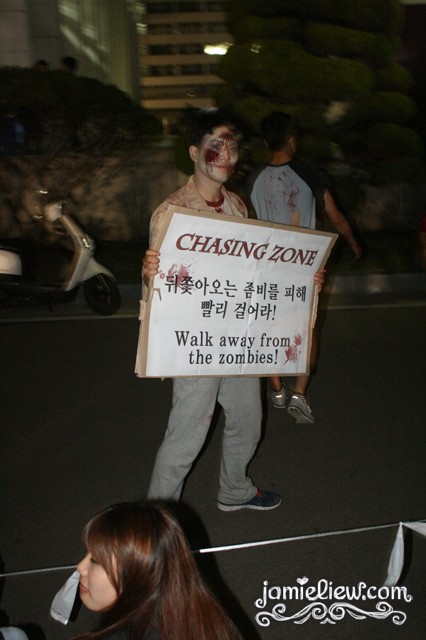 this guy was awesome. my friend thought I knew him haha. because he was standing behind me just looking at me while I was talking to my friend and I literally got scared by him when I turned around wth. 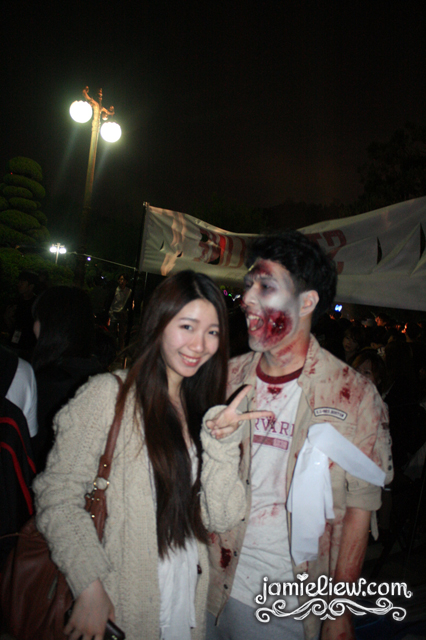 and later on he did the same to my friend hahhaha. awesome cool zombie was cool. he didn’t say a single word but he was just funny like that =P. 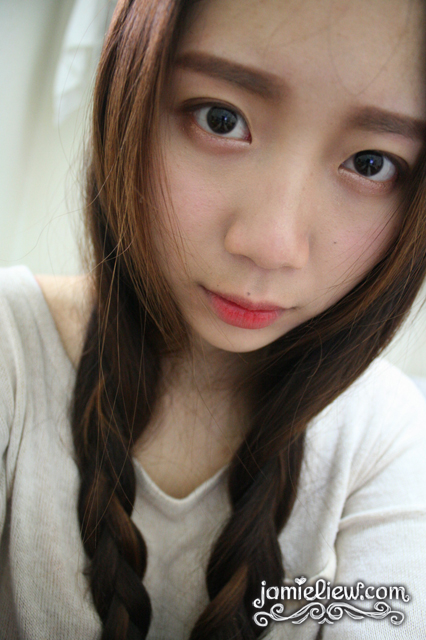 this is random but see how bad my skin really is? hahhaha.

Hello Jamie! I always comment on your posts, Im not sure if you remember. I am from the Philippines! Wow! Thanks for mentioning about us and how most people in our country can sing. It’s true though. We also have a “noraebang culture”. Before this post, I already thought Koreans can sing well, most of them. Glad it’s not just me who thinks that… <3 Your skin is still good, though yesterday I was reading your old posts when you first got to Korea. Honestly, your skin was better then.. But still so pretty now.. <3

…. I honestly love that zombie ran game.. wanna do it with my team. 😀 hahaha.. how do you play it jamie?? i mean the detailed mechanics..:D Thanks for mentioning Filipinos are good singers.. (I’m one of those people hahahaha) I think so myself. 😀

Hi Jamie! Filipino reader here. I was like “woah, she mentioned how good Filipinos in terms of vocal skills!!” HAHA. Thanks!!

That zombie run game, we have something like that in the Philippines. It’s actually called Outbreak Manila and many people participate in that marathon. 🙂 http://www.outbreakmanila.com/

I’m now missing South Korea so bad. Well, I’ll be back there in a few days so I guess I just have to patiently wait. LOL