but it’s better late than never hahaha. even though I am not studying in Yonsei anymore, I still love all Yonsei events. and my favourite? Akaraka. if you’ve read my post last year, you would probably know how fun it is already. this year is no exception. but I still preferred last year. not sure if it was because they had students from Korea University and we sang songs to diss them. this year was.. all new freshmens and usual with a new lousy song which I didn’t like. 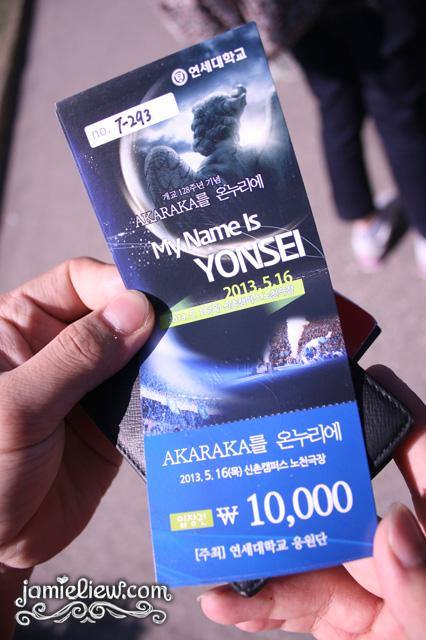 this year’s title : My Name Is Yonsei. 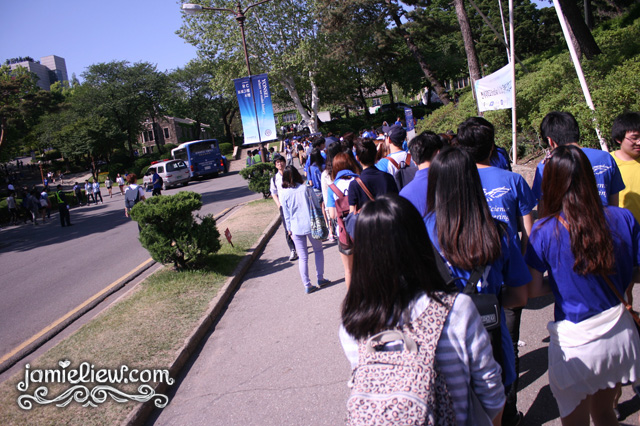 I came here directly after class and reached at about 4pm and the queue was already this long and the Cass Towel was already out of stock. dammittttttt. 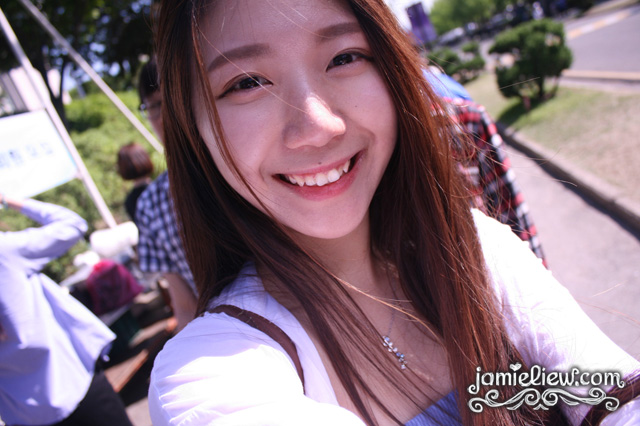 hello =3. despite being barbequed under the sun, I am still A-OK! 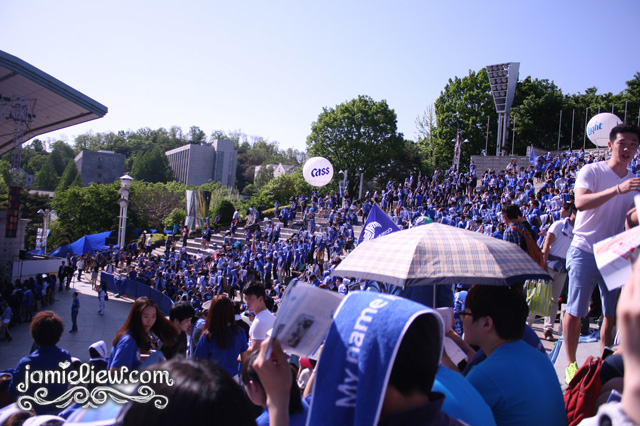 as you can see, it was really hot. about 70% of the people at the other side wrapped the towel around their head. and guess what. I HAD NOTHINGGGGGG. T_T. gotten completely tan that day. sigh. Summer-like Spring. T______T. 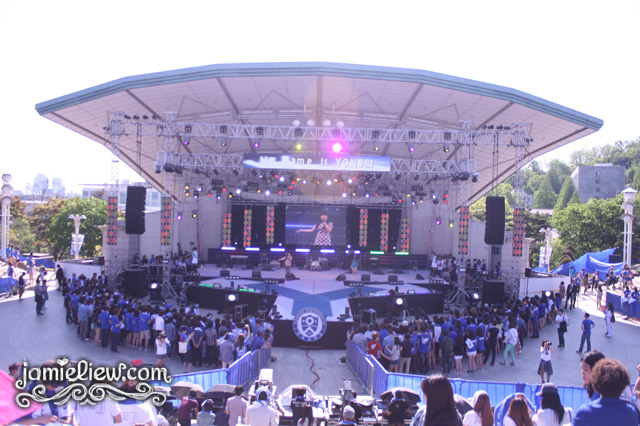 Park Ji Min and some other girl singing “Somebody,” their song which got reallllly popular these days. but to my disappointment, they are not famous. I DON’T GET IT. SERIOUSLY. THEY ARE MUCH BETTER THAN MOST SINGERS. when I heard them live I literally went “WOW”. sigh, Korea and their biased on looks attitude. 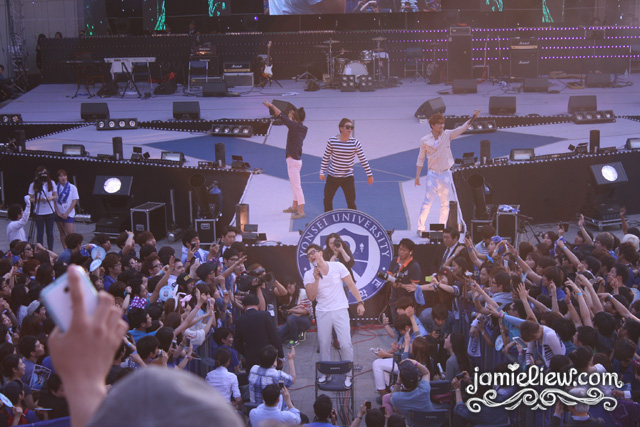 and “The One”. I actually came to Akaraka this year because I heard Roy Kim would be here. and I didn’t really fan The One much. but he’s hell of a great entertainer. much better than expected. just so if you don’t know who he is, he sang the main OST song for the Drama “that winter, the wind blows” starring Song Hye Gyo. it was so great. very touching T_T. 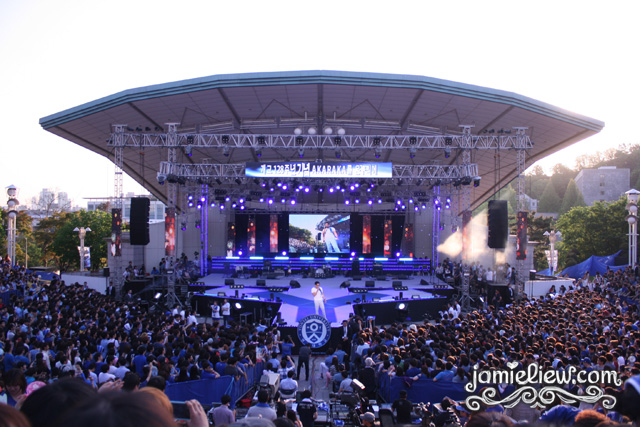 eyes on “The One”. after him there was this group called the JK Tiger but I didn’t appreciate those hip hop kind of music much so.. but they were no doubt good. just not great. U_U but they were really entertaining. the girl in that group was super pretty and later I found out she’s half african and half korean! 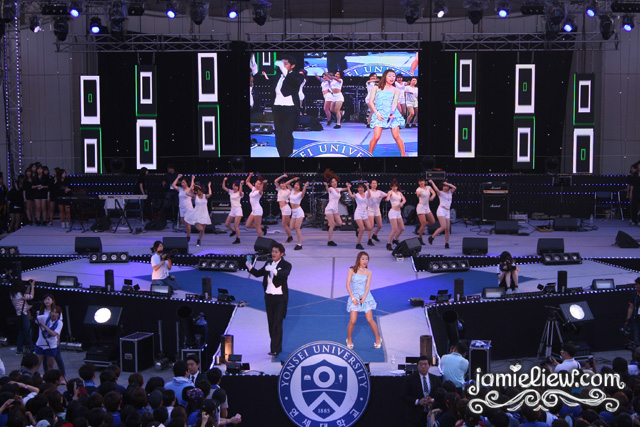 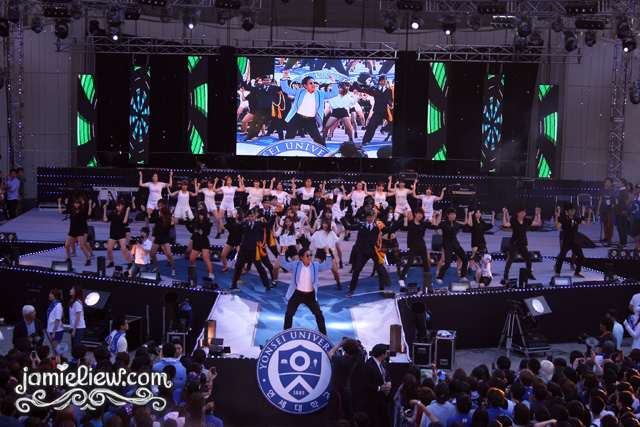 and Yonsei’s Gentleman. hahahah it was super entertaining because he’s a tan version of Psy. and that amount of dancers made the stage even better.

so guess who came out next?! 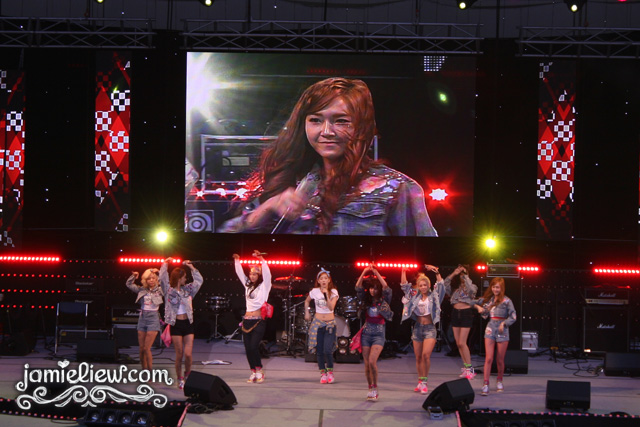 SNSD! they had only 3 members last year but had ALL the members this year performing quite some songs. I bet they blew their budget on SNSD which resulted to the lack of singers this year. 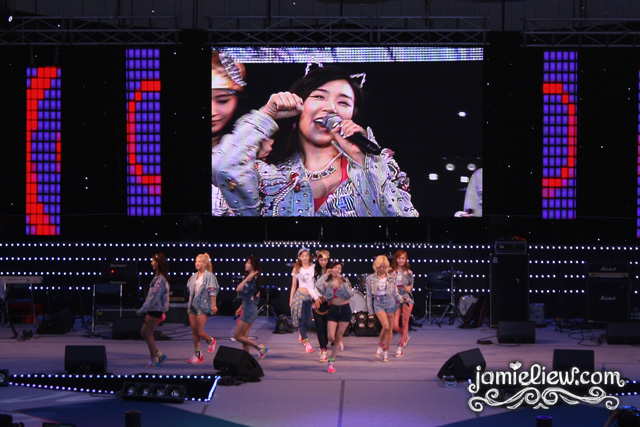 I mean, I like SNSD but WHERE IS MY ROY KIM!!!!! I heard he went to Hongik. but I don’t have any friends studying in Hongik T_T. 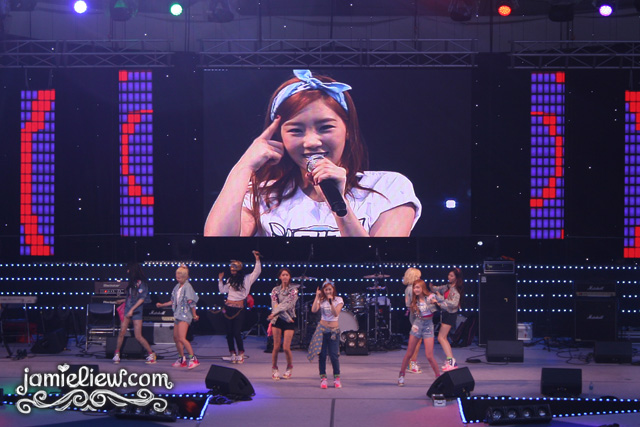 she was the prettiest in SNSD. no doubt. 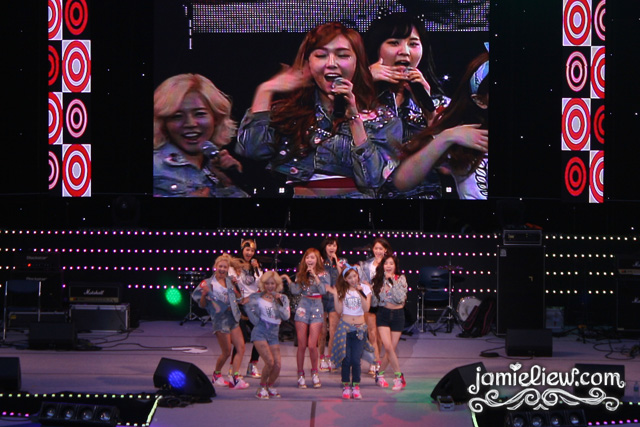 so ashamed of myself because I don’t know their names hahahaha. well, I am a girl. and once you start studying here, chances of losing interest in K-Pop is rather high. out of all my friends here, only 1 is still a K-Pop fan hahaha. 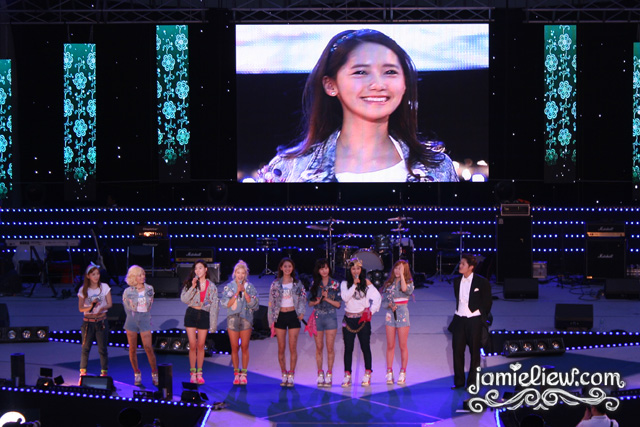 everybody’s favourite Yoona =D. I don’t find her very special but I guess her innocent look is very much of a win. 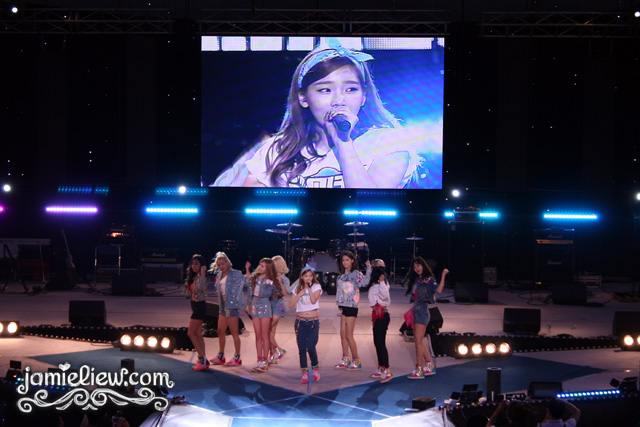 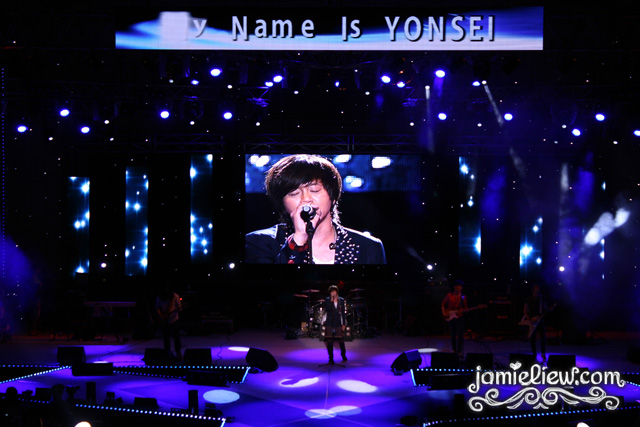 and we also have YB! (Yoon Doo Hyun and Band) I only knew 1 song but when I heard that 1 song live, I literally got chills. <3. awesome.

they showed pictures of 2PM, 2AM, Miss A and so on and everyone was getting super excited and suddenly… 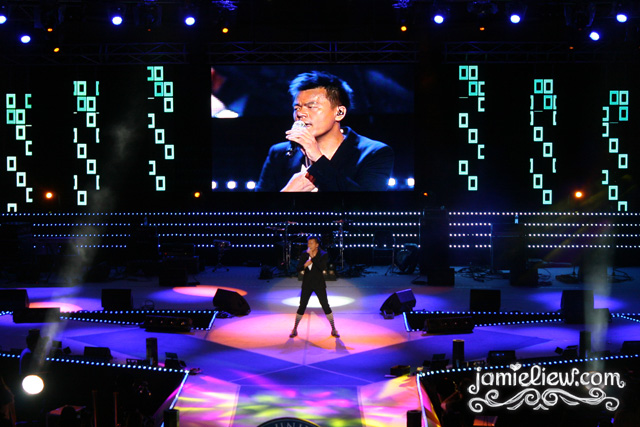 JYP pop-ed out. he’s indeed very talented in music but I do not really fancy his songs except for the few famous ones which… the covers usually sound better than him U_U. anyway, he graduated from Yonsei so he calls himself Seonbae hehehe. if I ever get a chance to meet him one to one I’d definitely call him Seonbae loudly hahahahha. lucky friend of mine went to some club in Gangnam and met him. DRANK with him some moreeeeeeee. D=. bloody lucky pfft. apparently that friend was pulled into the VIP area where JYP was hahaha because she’s tall she said. but I think she’s pretty! remember Margaretti? =D. if you’re curious you may dig up my first few posts of Yonsei University =3.

so the concert went on for the WHOLE DAY. famous singers came up until 9pm and they were dancing to the “cheer” songs of Yonsei until 11pm. we were ALREADY dancing towards those songs up till like 7pm T_T. not sure what time the other people reached but I was there at 4 and Park Ji Min was already there. later, they had group bands from Yonsei and some games bla bla bla.

that’s all for now! another exam on Friday. pffffft.

Hi Jamie! You obviously dont know SNSD, but its fine. lol. Actually, not all members were there. only 8 came. 1 was missing, it was Soo young. And the girl you said was the “prettiest” and then the girl you said was “Jessica” was actually the same girl. It’s their leader, Taeyeon. lol ^^ She is really pretty. Saw them perform live, too here in the Philippines… But I went to the concert for Infinite. Too bad you dont like Kpop. I guess there are so many Kpop fans out there whod want to switch places with you, go to Korea so they could follow their idols around.. Then there you are, already in Korea but not very much interested with the music.lol.

Good luck with your exams! You can do it! When youre not busy anymore, I hope you can blog more… I always visit your blog… More please. lol Thanks and Good luck! <3

my friend is going to study in korea soon under JPA & she’s very excited (duh cus of kpop) & like what you’ve mentioned, i guess she’ll lose interest in kpop once she studies there? haha

I’m always up to date with your posts… But now, I guess I’m tied up with this volunteer work I’m involved in. I can hardly check my email ooooowssshhh..!!! Plus the internet connection is awfully slow.. 😀 woaahh!!! I’ll read this article again as soon as I’m back home.. 😀