firstly, I have never understood why people would aim at me. I remembered the times where I really care about people using my pictures. but it seems like now I find it more like a joke. it’s just super funny.

growing up I had tonnes of haters. especially people who do not know me personally. they often said that they just hated how I look. well, I guess my face isn’t very well liked. but yet there are people who like my unfriendly look. a few years ago this girl used my pictures and turned me into a lesbian. I messaged her and she said she would remove my pictures if I send her a naked picture of myself. =___=. well, I was young and naive. I didn’t even know why I would talk to an identity theft. anyways, that isn’t very interesting.

my imposter is WAYYYYYYY more popular than myself.

in Japan! (can guarantee that she’s Japanese because some pictures had that geo tagging thing which revealed that the posts were posted at Tokyo.) 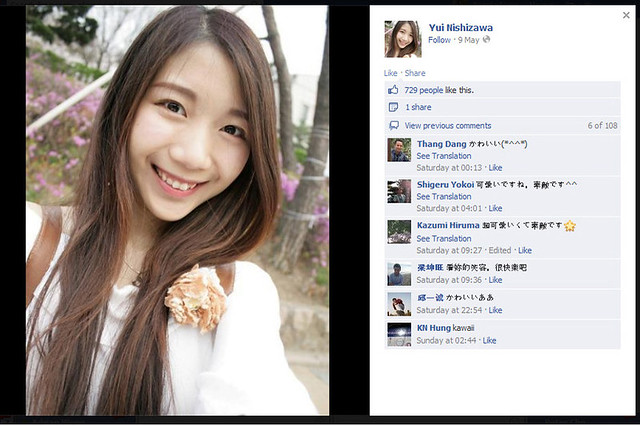 hello my name is Yui. hahahaha. thanks to this, Yui is now my nickname. even if I beg or ask my friends 1 by 1 for likes for a picture, I DOUBT that I can even get more than 300. and whaaaaaaa?? 700?! and over 100 comments. wow. I remembered I joined some contest a few years ago which required me to get the most likes but I failed because my friends would just ignore my message. well, I am like that too. which is why I hate these type of stupid, time-wasting contests. only did it because I really wanted the prize lol. got it anyway. 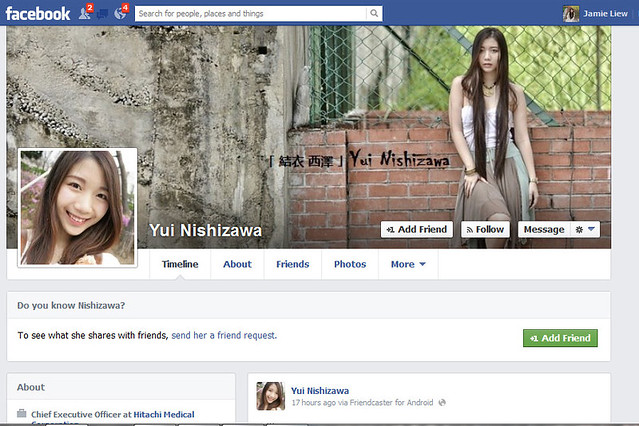 fuiyoh even watermarked so well like as if it’s her own picture! she stole all my pictures from my blog. which means, she had to crop out my watermark for each and every picture. which she did. 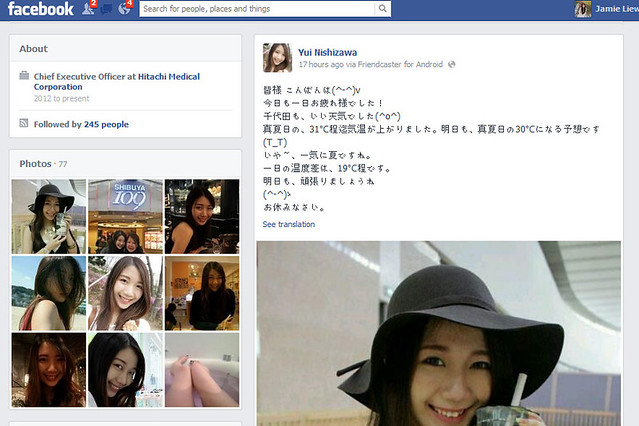 fulamak I hope I had skinny legs like those. asked my Japanese friend about what she wrote about and apparently it was all innocent positive words which every Japanese guy would fall for. tsk. okay. 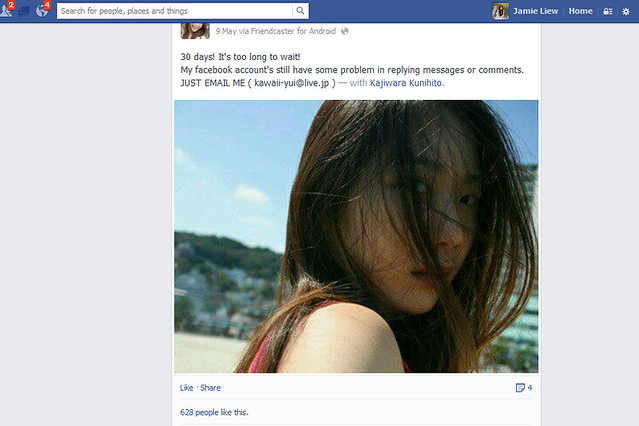 she/he/it speaks English too! almost every picture she posted has shares, over 600 likes and loads of comments.

the guy who informed me was Japanese too. I had a Japanese friend read the message and hence I found out about this imposter profile. I didn’t want it to be deleted actually. because I wanted to see how popular can “Yui” be. but sadly when I shared this funny incident on facebook all my friends reported and it got deleted like in almost an hour. I didn’t know facebook became so efficient. I really want to thank the guy who informed me because this made my day. but the thing was, I went into his profile and I saw my own pictures (with watermark) posted all over his wall. I do not know if I should be happy. D=. I guess Japanese people like my unlikable (in Malaysia) face. I should move to Japan.

on the very same day I went for Sundae (Korean blood japchae sausage roll thingy) with Wai Kit and he got so engrossed with the funny comments my friends posted but later found out that the post was somewhat deleted before we could read all the comments. I do not get it. I posted about the profile and much more but how did me posting the LINK result in the loss of the WHOLE post. =S. oh well. I did not get to see the 40+ comments because I went out. Wai Kit was curious if I had any more imposters so he facebooked my name. and guess what he found? 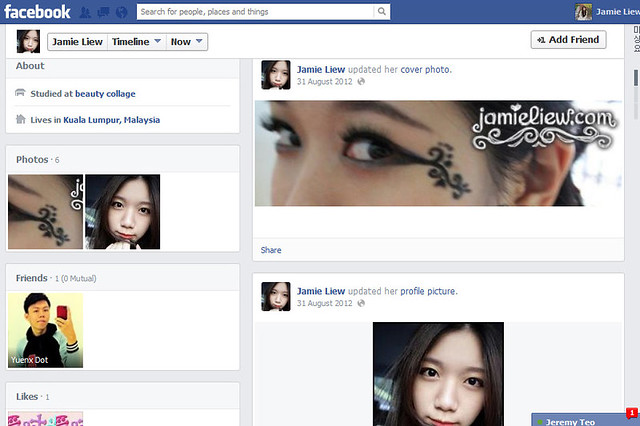 hello, I am a beautician. and I am such an illiterate I can’t spell college. hahahahahahahhahaha. and with MY name. awesome man. totally awesome. except this Jamie Liew has only 1 friend. still amusing anyway.

PS : I should really learn how to market myself like Yui. crap I really want to know! nobody even likes my facebook page even though it is open. I guess I should aim at the Japanese market. HAHAHAHA. first step to gaining popularity : learn Japanese.

anyways, I thought you’d find these amusing too.

I think this is my favourite post LOL. hahaha

Hello, I found ur site by chance..been reading it for a while 🙂
Your story reminds me of this mtv show call catfish….maybe the person is using your picture to befriend someone else??
I dont get why people are doing this kind of thing..just doesn’t make sense, Lol, but apparently it happens in a lot of places…but this at least prove you have admirers 🙂 , be safe anyways

good that you are taking this lightly.
thumbs up for this post, give you a “like”
hehe ^^

I don’t understand why Malaysians don’t like ur face. I do like ur face! Haha. Very pretty, n I’m Malaysian. I guess some ppl r too jealous of how pretty u look

hahahahahahaha…. maybe it proves that you are quite popular already…. and duh!!! haters???don’t mind them.. I think you’ve got a lot of admirers far away.. 😀

Thank you. I support you as your fan of Japan.

Hi Jamie! 🙂 I’ve been reading your blog since last year, hehe. I love your posts about your daily life and travels in S.Korea. I’m from the Philippines by the way. I just decided to finally react to this post because I can somehow relate to this but the thing is, my poser used my identity to ruin others (I know, so rude right?). But then, I decided to let it all pass and let karma do its thing. Good luck Jamie! Looking forward to your future posts. And don’t worry about your haters, they’re just insecure. 🙂

Australian Chinese here. If everyone in Malaysia looked like you.. i’m going to move there!
Would wife/10 😛

Hi Jamie!
Was it a weird feeling, realizing that someone in another country was pretending to be you? I have to say, I’m not sure if I would feel flattered or really creeped out… And for what it’s worth, I liked your real Facebook page (I think!?) and I think you have a very unusual and interesting look! Like, you can tell that your good looks don’t come from buckets of makeup and plastic surgery.

Bye for now from America! 🙂

i enjoy reading your blog and life in korea! i hope u wud do well in studies… aaa make me wanna study there too. my last trip to korea (jan 2013), mostly because of your blog although i had to skip yonsey univ cause of longgg time in edae haha.. lots of love from malaysia 🙂

If that happened to me, I would be mad and want to take revenge…..I hope you catch that culprit! I wonder what Yui actually looks like….

oh! you should get all your friends to post a link to your blog!