MT stands for Membership Training. don’t know why but oh well. we get “trained” to drink here, to cut things short. 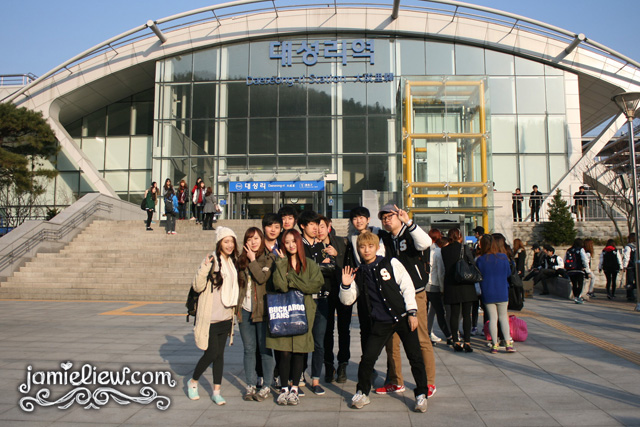 most MT’s are held at 대성리 Daeseongri. be it people from Yonsei, SNU, Korea U, Sogang, they alllllll come here. the staple place for all Korean MT’s. located near Chuncheon. the rent of a “hall” for a night would cost around 300k I heard. for a place so secluded and without much facilities, heck that’s expensive! 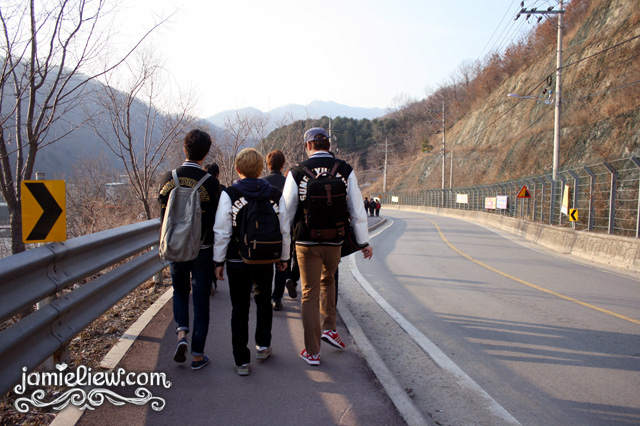 and from the station, it’s another 15minutes walk. not TOO far to be honest =D. at the same time I admired the view. it’s not very often for me going to the kampungs (country side). 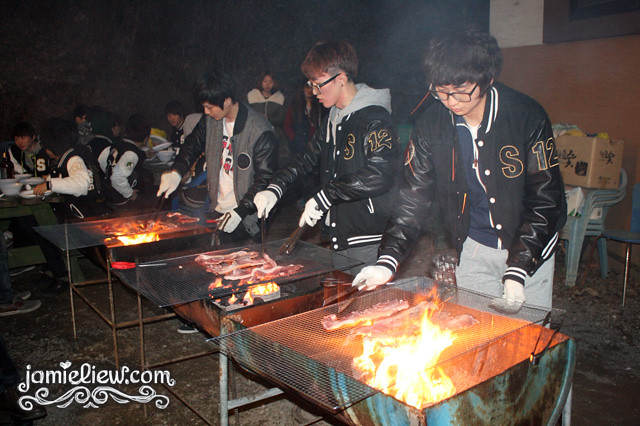 our heroes of the night!!! *tsk* they bought like the most meat I’ve ever seen in my life. but of course, to feed like 40 of us, it’s just right. =D. but barbequing with those crazy fire is.. quite crazy. 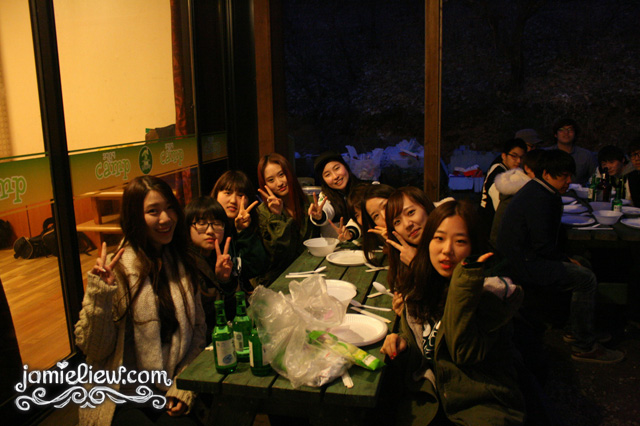 the pretty girls in my class =3. it’s funny how all the girls sit together. hahaha. but we do mix around when it’s alcohol time! 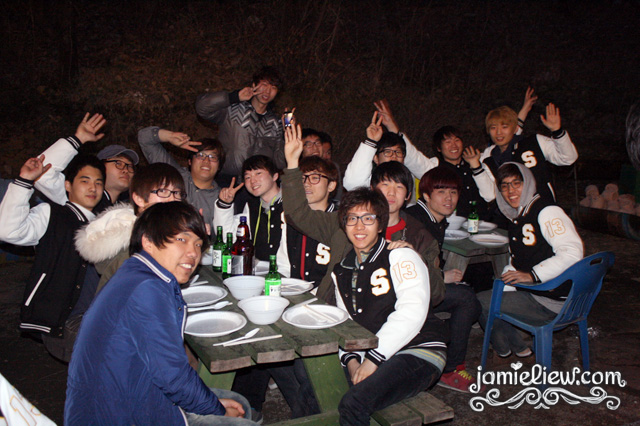 since all the girls sit together, all the guys were left alone. there were actually more girls than guys in our class but I guess most girls didn’t come for MT =S. 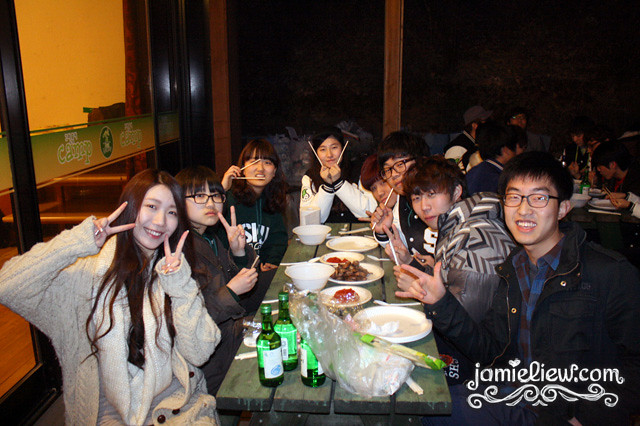 and when we continue to eat more. basically we just had marinated pork dipped with ssamjang (bean paste chilly sauce?) and lots and lots of delicious kimchi! 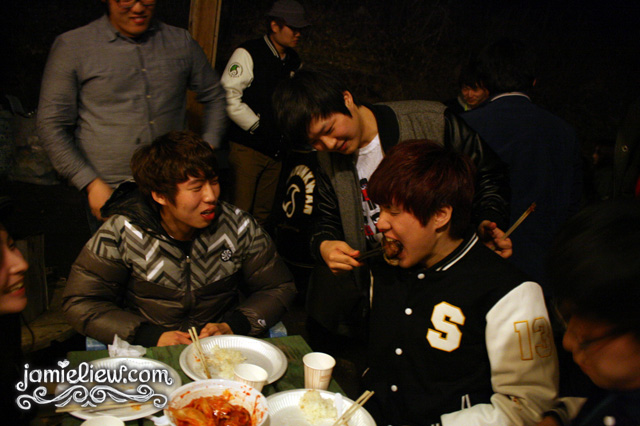 poor guy who got attacked by a “samgyupsal role”! it was so hot and his gums were like burnt or something =S. 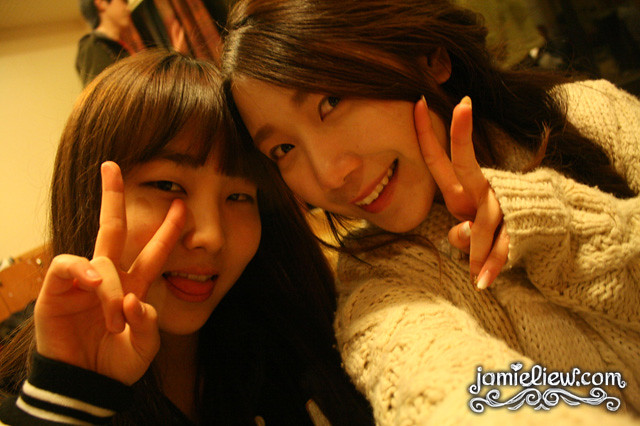 can you believe it!!! she’s born in 1995. but so pretty and is already in university! in Korea if you’re born early in the year, you’d be attending classes with people 1 year older. so.. =D. 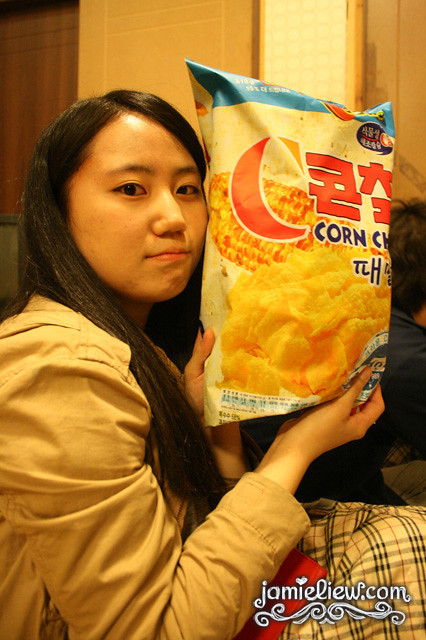 only Korea has such awesome huge packets of chips. its more than double the size of our Mr Potato. 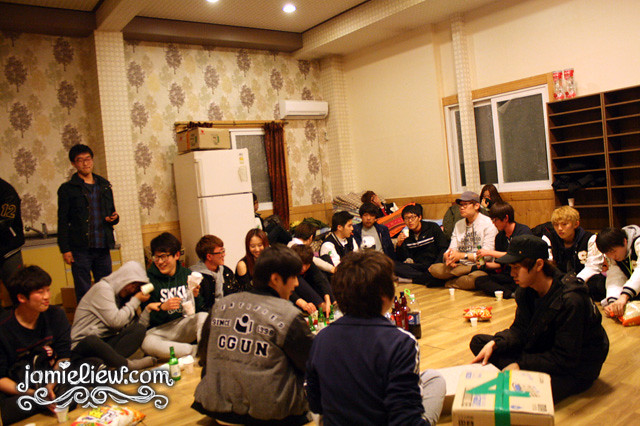 so after dinner, the game begins! 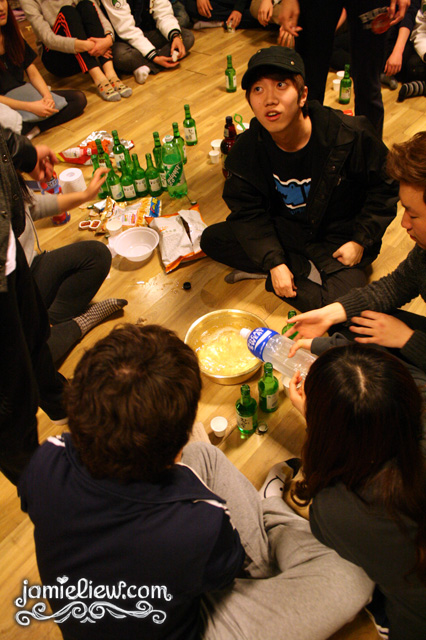 can you see the amount of green soju bottles tsk. for this round, they mix all sort of alcohol with all sort of soft drinks in a bowl and the one’s who got picked out must drink from it. =S. and finish it. they had this thing like a monopoly board where you roll the dice and see where it lands. but on the board, it’s filled with who should drink. say, “people who’s wearing a necklace”, “those who do not need to go for the army”, “all girls”, “all freshmen”, “all foreigners”. stuff like that. 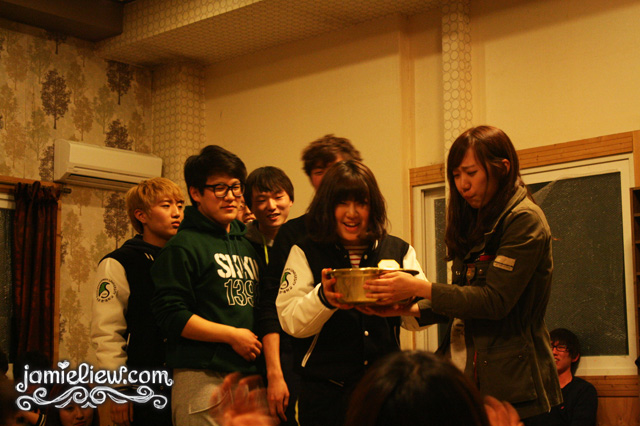 the few poor ones who had to finish the HUGE bowl of alcohol! 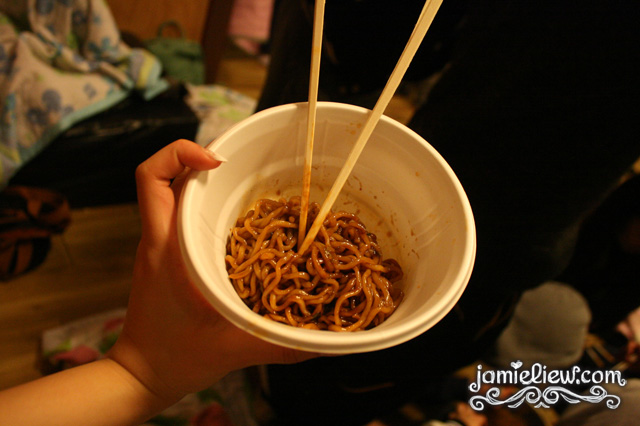 at like 3am in the morning, we got hungry again and so we made JAPAGURI!! there’s this Jjajangmyun ramyun called the “Japaghetti” and this spicy soup based ramyun called “Noguri”. you basically mix both of them and create this awesome Japaguri. where it brings the best of these 2 ramyun. I’m telling you.. it’s SO good. 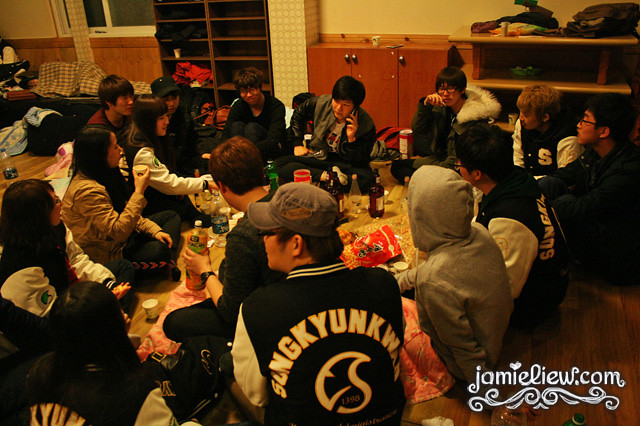 and even later at night, after some people K.O-ed the ones who remains? CONTINUES DRINKING. 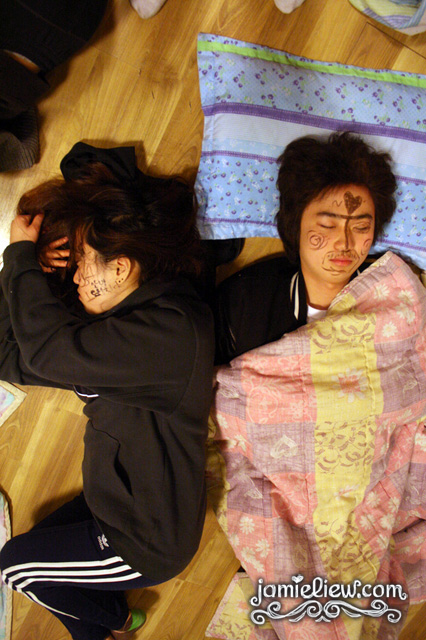 some people just don’t sleep because there are “consequences” for sleeping. =P. I slept but each time they try to touch my face I’d cover my face. just too alert when I sleep. 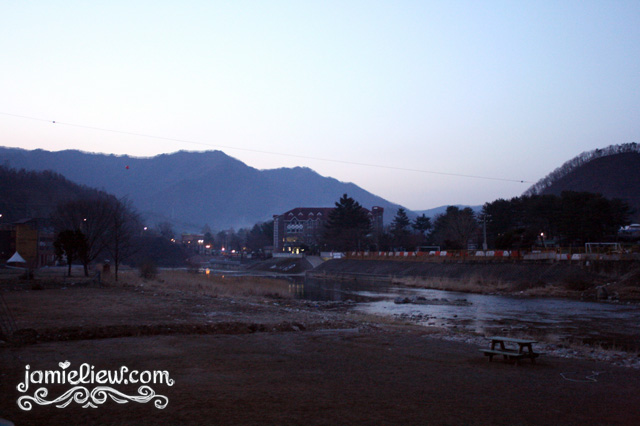 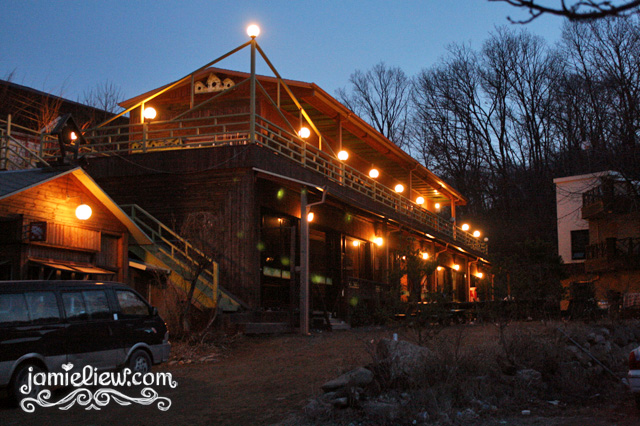 the building where our hall was. there’s already 3 (or was it4?) halls at the bottom! and they were all full! imagine the amount of money these people here earn! but of course, only during the peak MT times =S. so it is no wonder they charged more.

I guess this is all for now, tell you more next time! =D! tata!

I remembered jigglypuff (pokemon) who loves to draw things on people’s faces when they are asleep… hahahahahahahahaha.. Poor people on the photo..!!!

Jamie.. just wanted to ask if MT is only for drinking???( cause if it is I will surely need this one hahahahahahaha) or is there any more significant than that??

that amount of alcohol is crazily unbelievable!!! that’s why their tolerance becomes higher as they grow older. tsk! but am sure that’s loads of fun. i pity those who can’t drink much. hehe!

believe it or not, there’s also MT in melbourne uni… i didn’t go because my korean fail. haha but i don’t think i ever will, with all that drinking. i would die and fall sick for five weeks. D:

Hi! Just came across your website only until today!! Should have found this earlier. Haha
But can i ask if when you first go over korea to study,are you alone?
Im thinking of attending yonsei 3week programme!

omg would you recommend someone to go to a MT?
I am currently studying at Yonsei as an exchange student and I am debating whether I should go or not e u e;