I am finally done with my exams in Yonsei University and am looking forward to graduate this coming Friday! it’s quite saddening because I am probably the only few who won’t be wearing a Hanbok (traditional Korean costume. which my mom hates. she thinks it makes all girls look fat lol.) because I will have to get to Sungkyunkwan for a lecture right after and wearing a long heavy dress or bringing it around isn’t an easy task. besides, renting it costs about RM450 and since I have classes the whole day that day, I will be spending RM450 for 1 hour. just to look good. totally not worth it T_T. I know I will have more chances in wearing it next time =/.

I thought, “okay, I am finally a little bit more free to do whatever I want and stuff but I was wrong. I need to study like a dog because I have to attend MT (stands for membership training. but it’s actually a trip to a pension where you drink, drink and drink with your course mates until you get totally wasted. korean’s way of getting closer to each other. no joke.). thanks to that, I have to finish all my due-on-Monday homework and get done watching my online lectures which are relatively hard. I “only” have one long essay and a summary to do but the online lectures and the homework due this week are the pain in the arse. sigh. happy cramming to me?

back to topic, the week before last week was what we call the “kaepa” which stands for 캐강파피 (kae-gang-pa-ti) which means the party for the starting of the semester. but I’ll just call it opening party anyways. the last time we went drinking as a class was on the Orientation Day, but I had exams the following day and left early. so this time I was prepared to drink more as I was still a phail in games but surprisingly, did not end up drunk (반 친구들, 이걸 읽으면 나를 막 마시게 하지마세요 ㅠㅠ.). 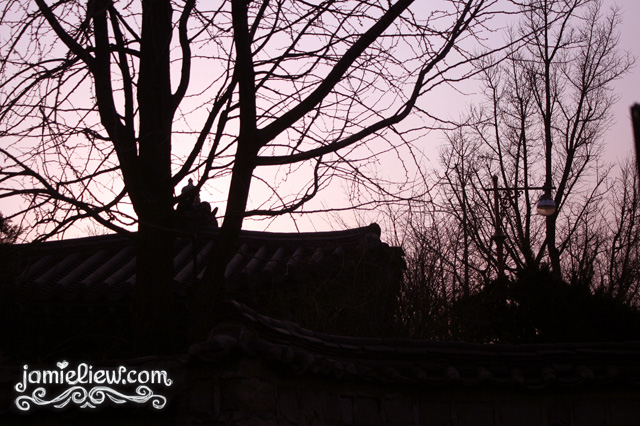 the thing I like about Sungkyunkwan is we are actually studying in a historical place itself. well, not that we are using the old buildings and all, but you can say we are right next to them? and we can go in anytime we want. plus, the walls surrounding our school are those korean old-school walls. which made it even more awesome! 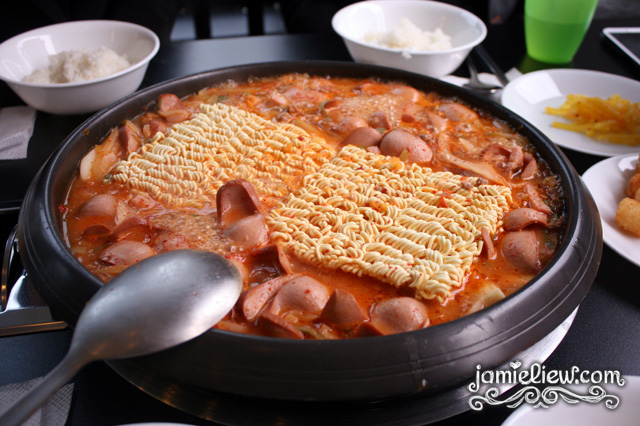 Budae Jjigae 부대찌개 – the Army stew. tastes awesome and you eat the noodles with rice. weird but it’s really good!

according to one of my senior (not sure if he’s lying!), March is when all the seniors have to buy their juniors and April is when we have to buy them back. I’ve got treated like 6 times. it’s quite amazing how I saved up 30,000won by eating off seniors. hahaha. which I have to pay to go to MT this week anyway. T_T. but from what I know we have to buy our juniors too next time. =S. it doesn’t matter if you’re a girl or a guy, you still have to buy even though the majority of those who bought us were guys =D. oh well I guess it’s the perks of being a girl. 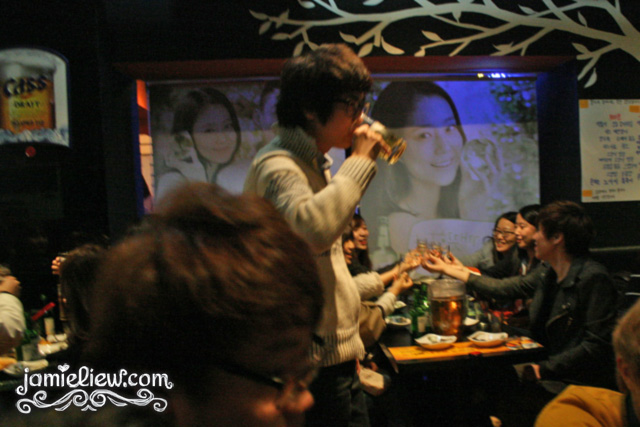 moving on to the OPENING PARTY! because our class is HUGEEEEEE, we conquered like half of the suljib (alcohol place). and that person who’s drinking in the middle’s my class monitor whom was late. and anybody late have to drink and do the FM (?. don’t exactly know what it means or if it’s even called the FM but it’s where they have to shout their name, year, major, do a ‘talent’ show and greet.); poor senior. 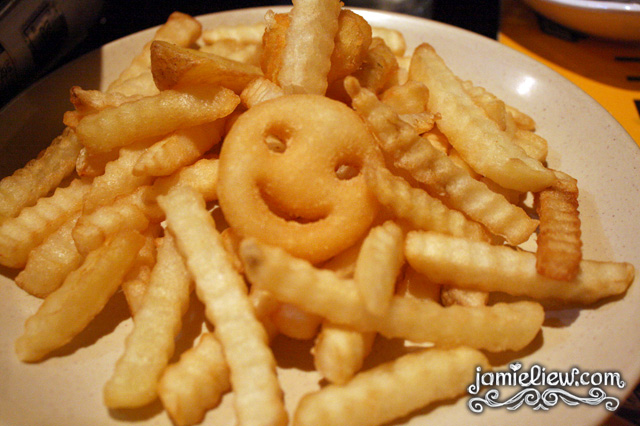 I thought that’s one cute french fry. or should I just say a fried smiley potato. haha. 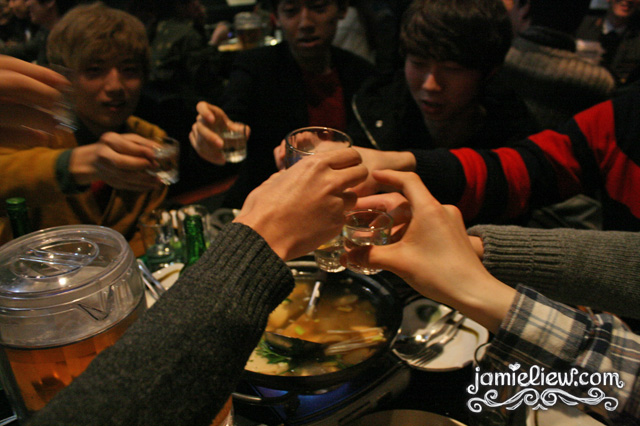 we pay 10,000won every time we come here and there would be lots and lots and lots of alcohol and food. we always start the night with a shot of Soju! 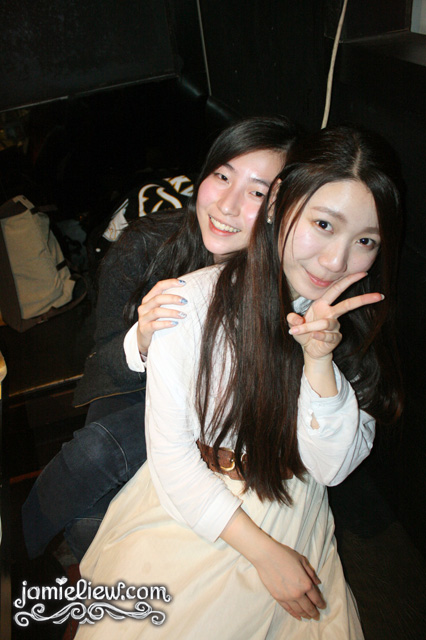 Eun Jeong, a girl who’s 2 years younger than me but absolutely pretty and speaks really good English. she has never been out of the country for English studies what so ever but her English beats all the Koreans I’ve met! =3. 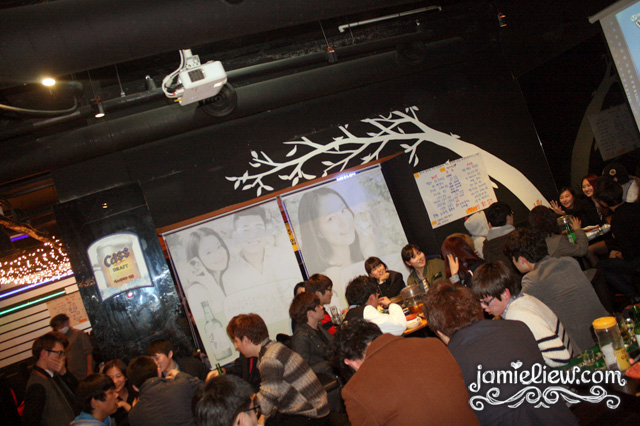 how our class occupies the whole place. we rotate our seats and start playing drinking games with people whom we are not so close to yet. but of course, the best way to get close is to go to MT. which I’ve yet to try! because during the last MT (school opening MT) I had to attend classes in Yonsei as we have a certain class hours we need to fulfill in order to graduate and the MT was 3 days. ON WEEKDAYS. 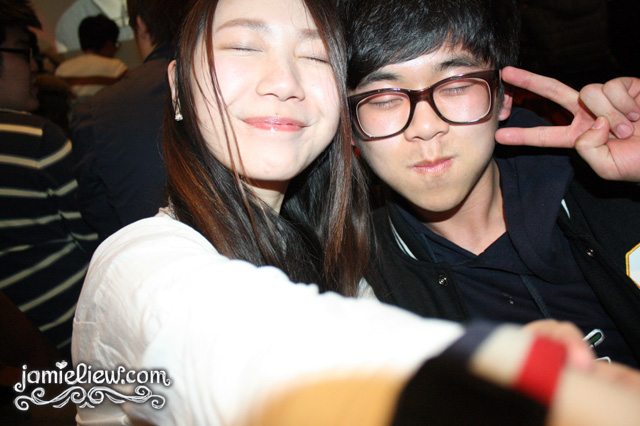 the cutest cutest cutest boy I’ve ever met, Hyun Woo. he’s born in the early 95s. in Korea, if you are born on January or I guess February too, you are considered one year older than your (Korean) age. where you go to school with the people one year older because you are classified as the same age in the Korean calender. 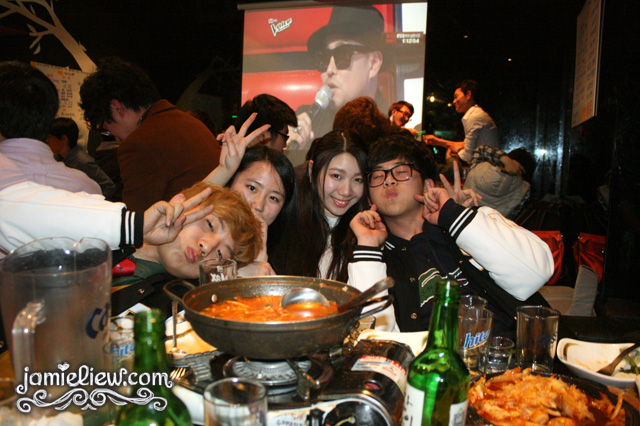 they were a little tipsy all right =S. hahaha. everyone’s younger than me. shucks. there was this chicken topped with cheese anju (side dish to accompany your drinks) which was reallllllllly good. 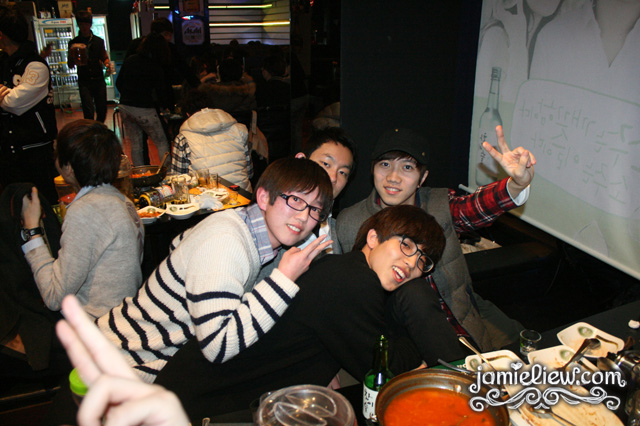 this is absolutely not ghey in Korea. my adorable classmates =3.

I actually prefer guys here whom are close with other guys than those who are so sensitive with letting another guy rest their arms to their shoulders. 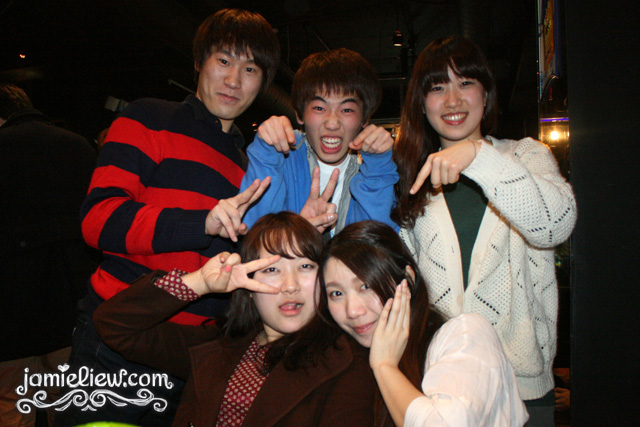 believe me, the guy in blue is cute. =D. the girl next to me sings like Beyonce. no joke. they are all such nice people T_T. initially I thought that most Koreans were really fake as that toilet incident drove me to believe so. (once I went to the toilet in this nice posh cafe and I was.. having a stomach ache. so of course, I took a LITTLE longer and the impatient girl outside knocked. I wasn’t in there for too long tbh. and I came out and said sorry but she gave the MOST UNPLEASANT LOOK I’VE EVER SEEN. later on I saw her with her boyfriend with a super fake smile and well I am not sure why but she seemed to look super two faced. nice in front of a guy and a total devil in front of strangers. I’ve experienced some others too when I call my Korean friends with a number they do not recognize and they would start the conversation rudely with a harsh voice and when I told them it’s me they would SUDDENLY soften their voice hahahaha. end of story.) but I am pretty sure they were all really really really nice people from the bottom of their heart. smart kids are really different ^^.

and a little dedication, I do not have many good friends/best friends in life. so when I found one, I want to try my best to treasure him/her. except I am quite a failure in it. all I wanna say is, thank you for your friendship and Happy 22nd Birthday, How Wei Zhong ^_^. take care and all the best in London!

Thanks for updating with sungkyunkwan 🙂 am considering to study there too 🙂 btw, you always say that you feel not as pretty compared to most korean girls but i beg to differ.You are so gorgeous.even more than the korean girls 🙂

I came across your blog while researching for my backpacking trip to Korea this summer….and I must say I’ve enjoyed reading it, really helpful stuff…

All the best for your studies!

Love reading your updates in Korea! :))))) and I would love to try on hanbok too aww 🙁

Hi jamie… it was really just a coincidence dropping by in your blog. I was looking for a make up tutorial website, and i got stucked at this website http://www.realasianbeauty.com. Well, most people will do read the recent posts, so i read the post that was all about the owner’s fave blogs and I found your blog as one of the listed ones (you might probably want to check this website out).
I do have this korean fascination a lot. So, I clicked your blog and started reading some of your recent posts. I really liked your posts about korean people, food, sceneries etc. It shows how you delved deeply with the korean culture.
I will surely be back checking out your other posts. Will find time of course as I’m not 24/7 online.
Before I go, I think you already have a pretty good grasp of the attitude of korean people. So if you don’t mind asking I would like to know, what are the good and bad qualities they have that you have observed so far. (aside from the toilet incident that you had of course ehehehehehehehehe)
P.S
I also messaged you through fb since you’ve listed that as one of the ways in contacting you.

To me you’re very pretty but you said you were a nobody when walking along gangnam.I guess korean standard of beauty must be really high like Yoona snsd then. I hear that girls there take care of beauty a lot: make up everytime,…is it true