only found in the last 10-20 years, Andong Jjimdalg is a very famous Korean Dish. I myself, am a big fan of this dish but I do not always eat this dish because it is not cheap U_U. 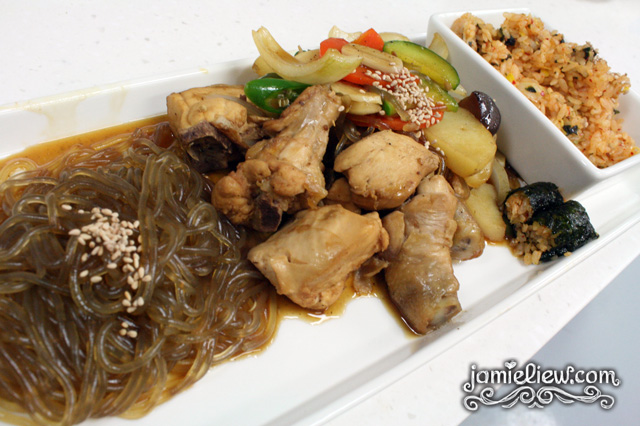 normally cooked with chewy glass noodles and mixed vegetables, this dish can be topped with the famous korean fried rice, which can be cooked with the sauce of basically any leftovers. eg : ddeokbokki sauce too! 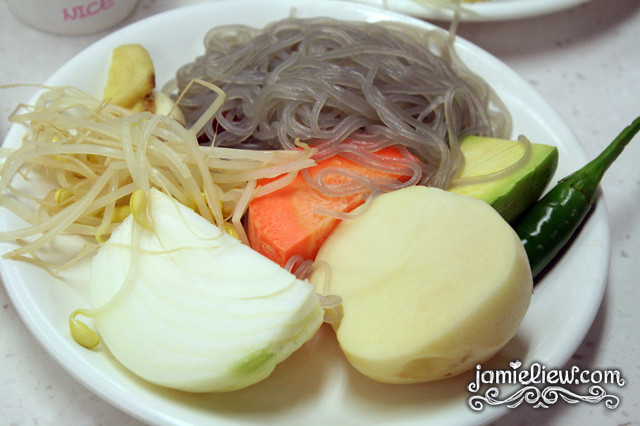 the ingredients to making Jjimdalg. that green thing there ain’t cucumber but it is called the korean pumpkin which is ONLY available in Korea. =D. 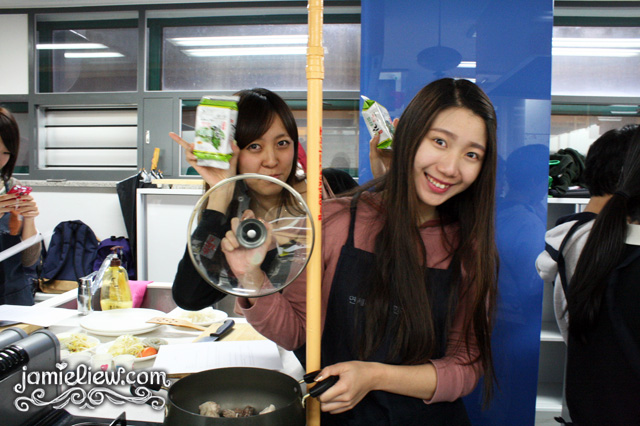 with Miena! our pretty Japanese classmate who watched Korean dramas her whole life and took an express 2 weeks course and got placed into Level 4 with us. madness. and she’s better than me in Korean I can say pfft. 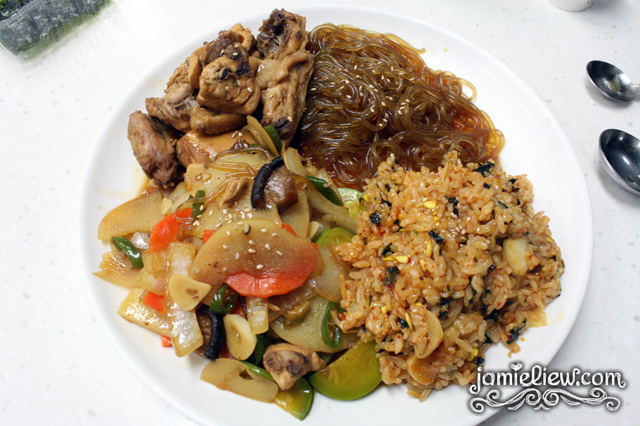 the Jjimdalg me and my partner made! yum yum yum =3.

I forgot the sequence of how to cook it but you should put those which turn soft easily later. =). 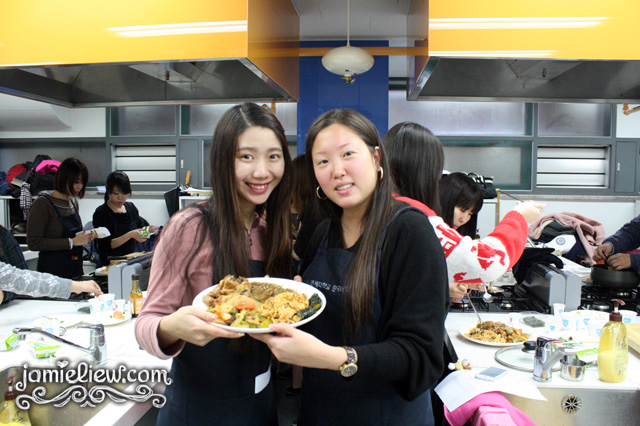 me, Diana and our Jjimdalg!

I was so happy with my Jjimdalg that I ate Jjimdalg the next day again. at the restaurant above the 7 Eleven (Andong Jjimdalg. its beside some Chinese restaurant. on the 2nd floor.) at Sinchon (from the Uplex exit, walk across the main road and go straight and you will see the 7 Eleven soon! 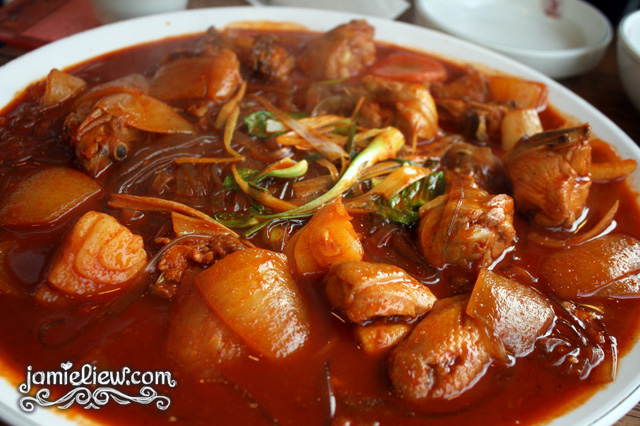 but we had something even worse. the spiciest thing I’ve ever tasted in Korea yet. I had so much of this I ended up crying. tears of joy of course for I have loved spicy food all my life. this is called the Jjimdalg Buldalg where BUL, means FIRE hehehhe. 찜닭불닭. 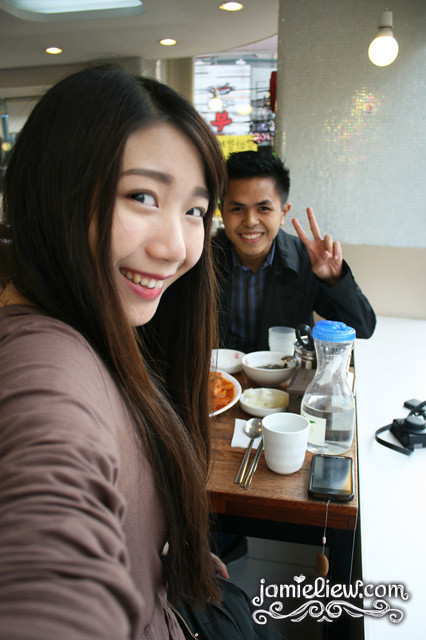 went there with my friend, Paul from Philippines! working in Malaysia though. 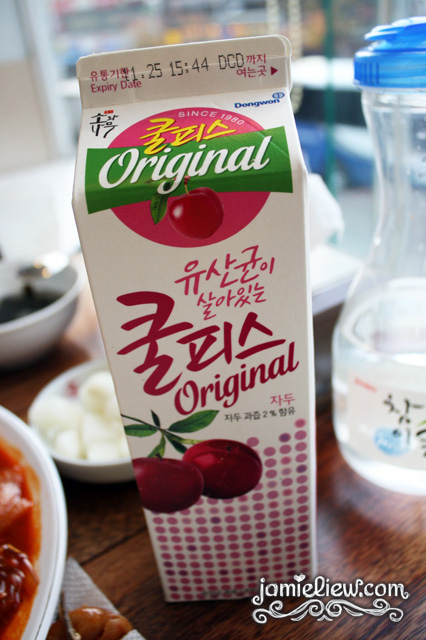 when you eat something that hot, COOLPIS is very very important. cools you down supposedly. you need at least 2 of these. though these are sold for like 1,000won in the marts and a few times the price outside =S. 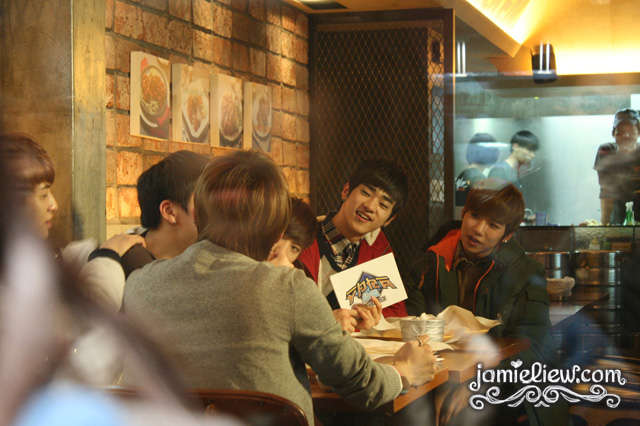 saw this group called 100% shooting at a Chicken shop. I didn’t even know them before this. I asked their manager who they were and their manager looked so grumpy. offended him probably =X. they had some games but since I wasn’t a fan, I didn’t continue gawking at them cute boys. =S. I’m just lazy like that. and it was cold! 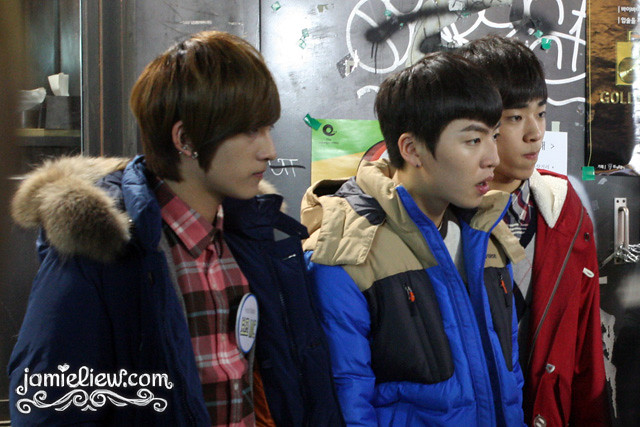 but that guy in that dark blue jacket was really pretty hot. my type!

and a little bit off topic. because I do not know where to put this, THIS IS WHAT I DID FOR CHRISTMAS!

for two non-christians, we were having some Christmas errr lunch with old-school Christmas songs playing in the background. epic. 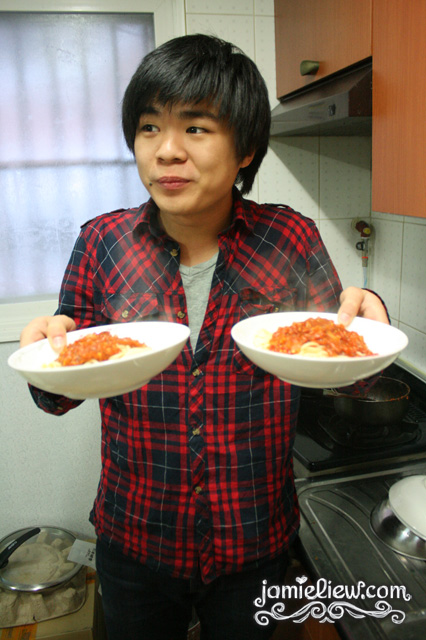 this is Leo. he’s the same age as me and I made that Spaghetti! MALAYSIAN STYLE!!! 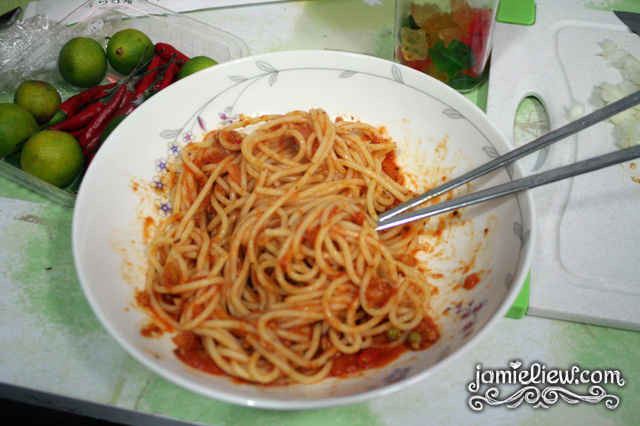 got my mom to send me some chilli padi’s and limaus for the extra spicy and Malaysian-ish flavour =3. and look, we had gummy bears! NOW THAT’S ESSENTIAL FOR CHRISTMAS! *cough coughs* 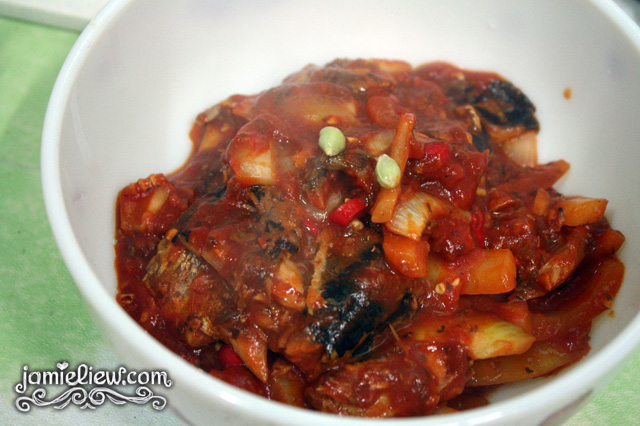 and I also made my favourite tomato chilli Sardine =3. with oh so crunchy onions <3. my absolute favourite. 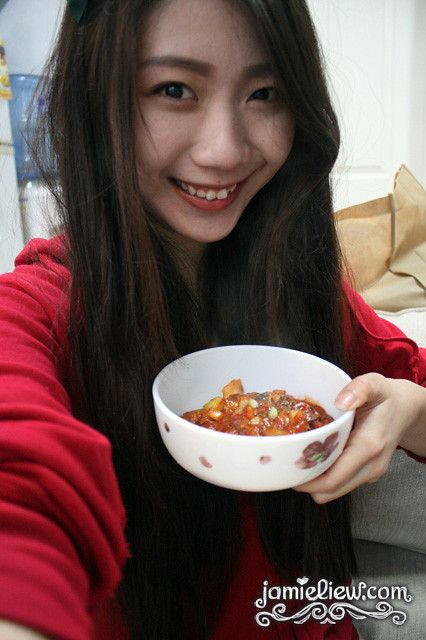 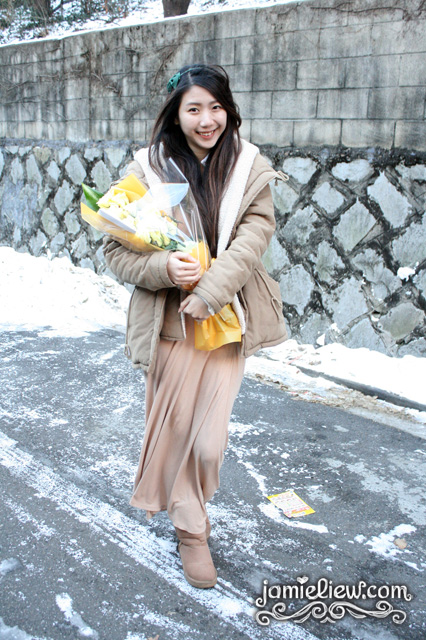 also, I want to thank Paul for the lovely yellow roses for Christmas! they were of super good quality and they were huge as well (grade A roses!). didn’t have much space to put them in my room but it’s so nice to have the thought that a friend sent you flowers even when he is in Malaysia =3. delivery service these days. so friggin’ efficient.

COOLPIS sounds like the yogurt drink CALPIS from Japan =P. OMG ! Jamie you sure 1 lucky gal. 2nd time seeing 100%. The guy in the dark blue jacket that you like his name is Chang Bum =).

I myself, AM a big fan (not is)
“leftovers” is one word.
That green thing there ain’t cucumber but IS called the korean pumkin
We had something even worsE (not worst)
they were of super good quality and it was huge (what “it” is needs to be clarified), because “they” refers to the flowers.

I have nothing better to do 🙂

teeheehee! I like 찜닭!! Especially the one that Se7en opened – Yeolbang at Gangnam! ^^ Maybe you can try that outlet hehe. And as for 100% is a new boy band debut under SHINHWA’s ANDY’s company TOP MEDIA. hee hee 🙂 btw, I really enjoy your blogging, hope to see you blog more hehe!!

Hi, Jamie! That 100% group could be the next SJ, Beast, 2PM or your favorite CNBlue. Too bad you didn’t join. You know, they could be famous someday, too! haha. I’ve seen so many reality shows of Kpop stars when they were just starting. They’d try to talk to people and like offer fan service and peple would decline (I saw Infinite did that in Myeong Dong and on the train)..And when they get famous, people won’t even be allowed to get near them. haha

you join cooking classes? 😀 i have a choice to do that or salmunori (?) or korean performance (not sure what’s this…) lol!

Hi! Stumbled across your site while researching for my trip to Korea. I am going for a language immersion programme at Yonsei! By the way, your photos are really pretty. What camera are you using? ^^

Hi Jamie! I found your site by Googling ‘Hongdae Noraebang’ and your posts about Korea are very interesting. I was gonna be a silent reader until I saw Leo’s picture in this post. Hahaha. I got to know him through Language Cast meetup last year~! ^^ I’m gonna FB him now. LOLS.

Hey Jamie, are there places whereby you can get chili padi in Korea?!