the one Korean food that I’ve failed to try even though I’ve been here for so long is Hanjeongsik. it is one of the most expensive meals around. costing at least 10,000won for the cheapest one which doesn’t include you starters. it serves you an array of side dishes which are refillable. costing around 15,000won-20,000won on average, it’s worth it if you keeeeeep eating. like a buffet. okay maybe not. but similar.

Hanjeongsiks were formerly served to aristocrats and the high and mighty. but today, even we commoners can have a chance to have a taste of it. 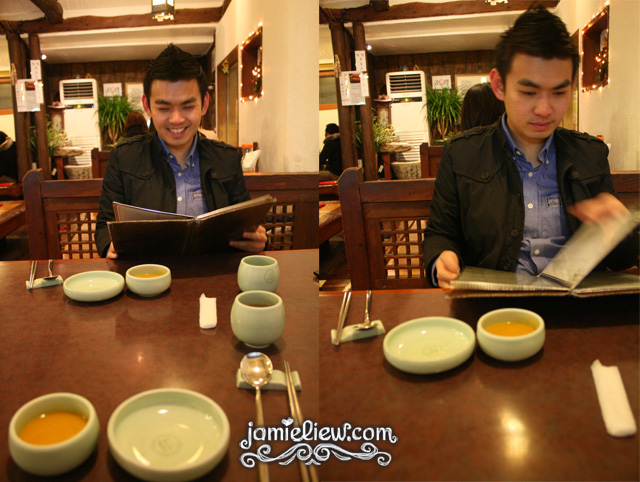 my family, a cousin came here and he said he’ll buy me anything yummy so yeah! Hanjeongsik it is! my family tree is filled with handsome guys and pretty girls. although I am one of the few odd ones. but heck, look at my sister and my cousin! 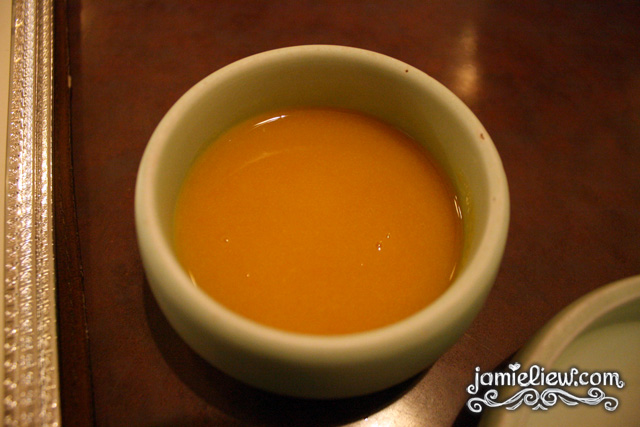 first up we were served with cold pumpkin juk. not to sweet. very fine. 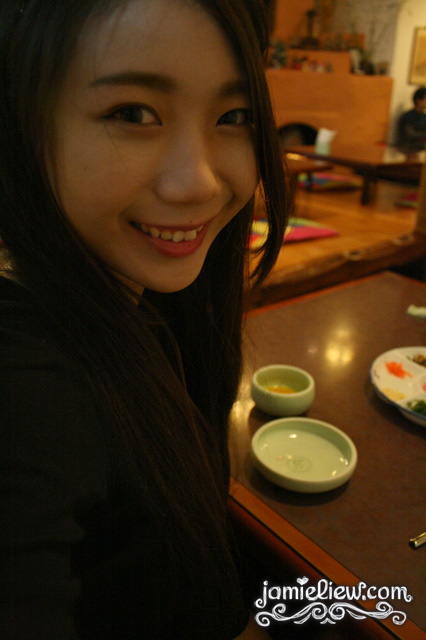 forgot to take a picture of the environment of this restaurant but it’s rather traditional. we had to sit on the floor. the ceiling was made traditionally with planks of woods without a single screw. 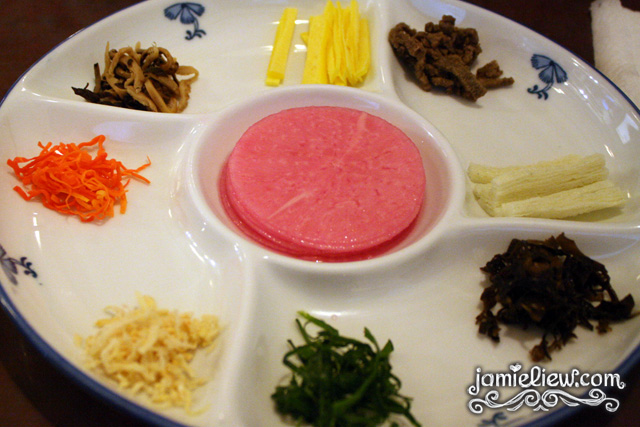 then there’s this popiah thing but instead of normal popiah skin we have thinly sliced radish as it’s skin. it’s called the Gujeolpan 구절판 where GU means nine. it’s nine including the radish. I hate radish but wrapping all those fillings inside, it actually tasted pretty good! 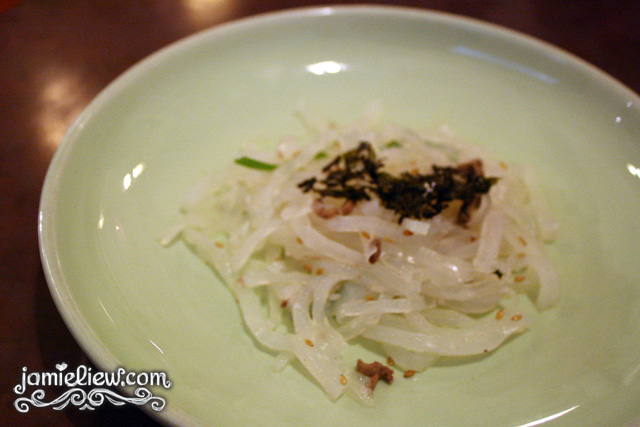 then we had white muk. it doesn’t have much taste itself so they are mixed with the fragrant sesame oil. I personally like muk a lot. it can be served in many different ways but still, I love it’s jelly texture. 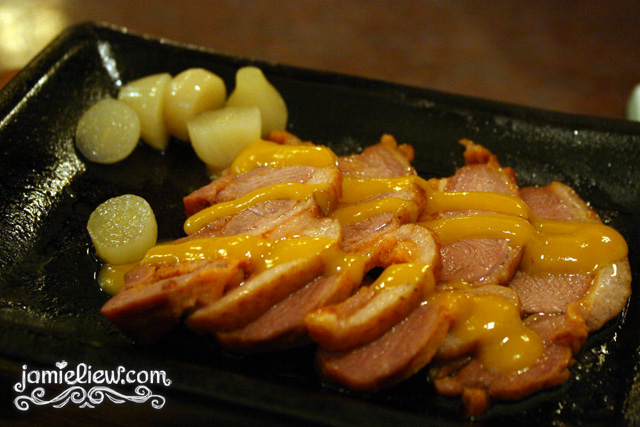 then we have the slices of duck meat (very rare to have duck in Korea, really.) with mustard. this is one popular Korean dish. I’ve eaten it at a Korean wedding as well. it always tasted good. 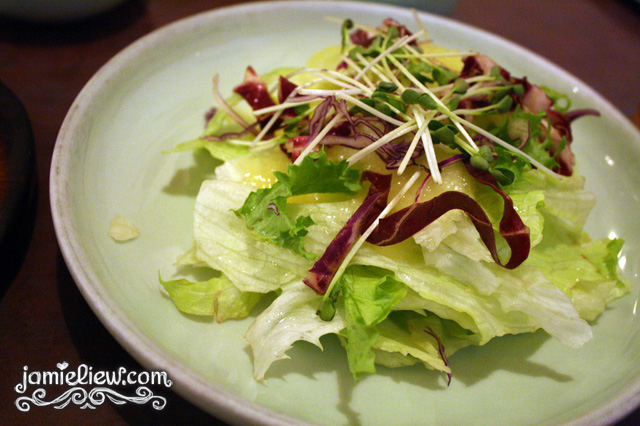 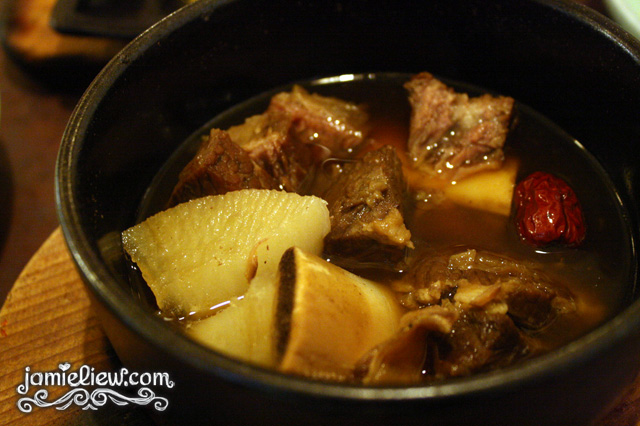 and my favourite of ALL KOREAN FOOD! a very expensive one. but it tasted so good. I’ve eaten better but this one was more healthy tasting. it’s called the Galbi Jjim 갈비찜. beef. very very tender beef ribs in a salty and sometimes spicy stew with a touch of sweetness from the red dates. my cousin loved this one the best as well. this dish can be ordered outside in several shops but it costs a bomb (to students like me T_T). 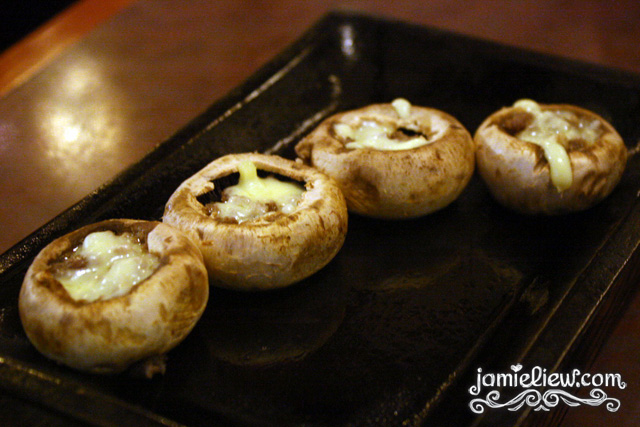 grilled meat stuffed mushrooms with mayo. oh god. do I need to explain further? you can just imagine its taste. 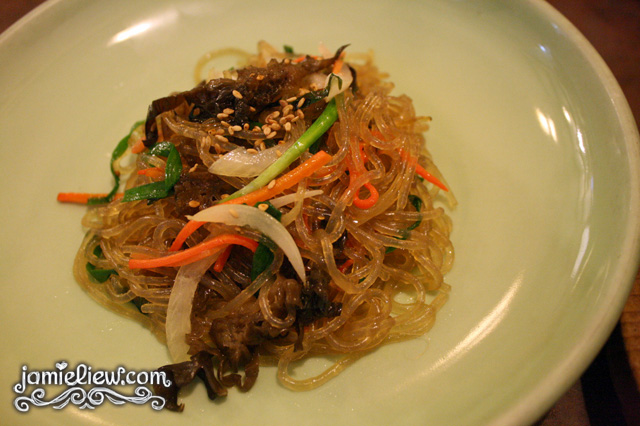 JAPCHAE! basically chewy glass noodles with a lot of sesame oil! =3. I CAN MAKE BETTER. teehee. their one here was tad bit too bland. 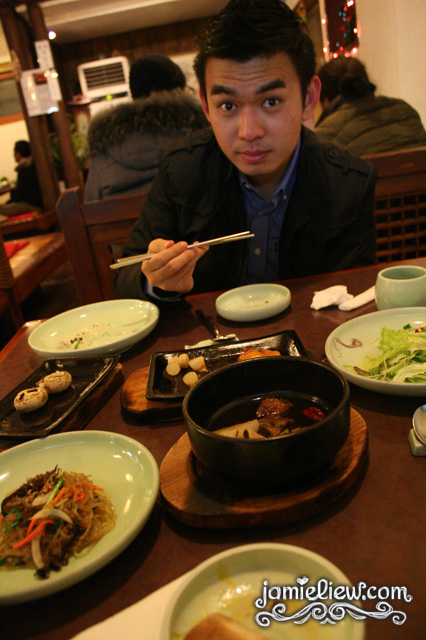 my good looking cousin again who will be moving here for work. YAY! FAMILY IN SEOUL! 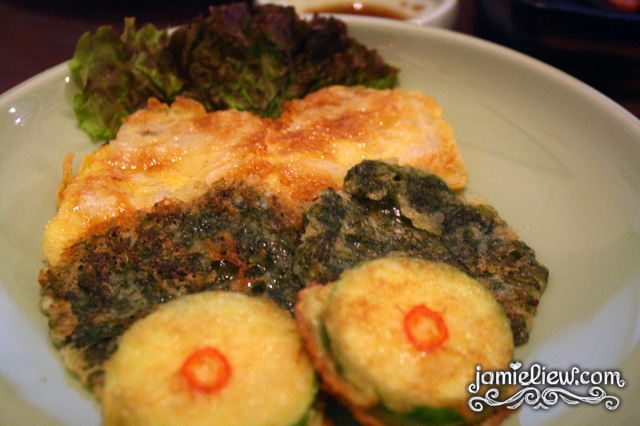 fried zucchini, some vege jeon thingy and fish! all tasted not bad. the cucumber one is a casual dish though. I’ve eaten it at home several times. I actually ate a not so formal Hanjeongsik once during a school trip and they served that fish too. 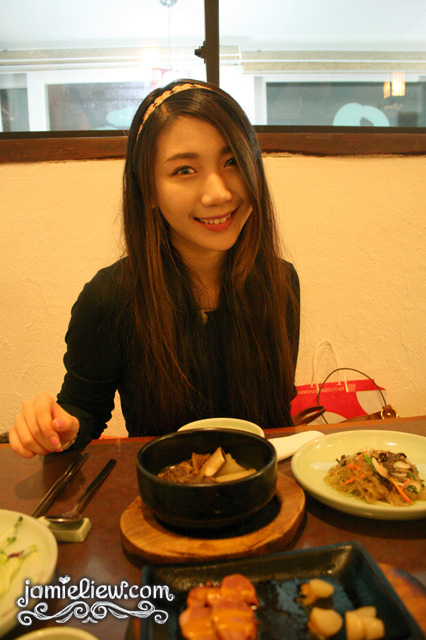 me and my favourite galbijjim. 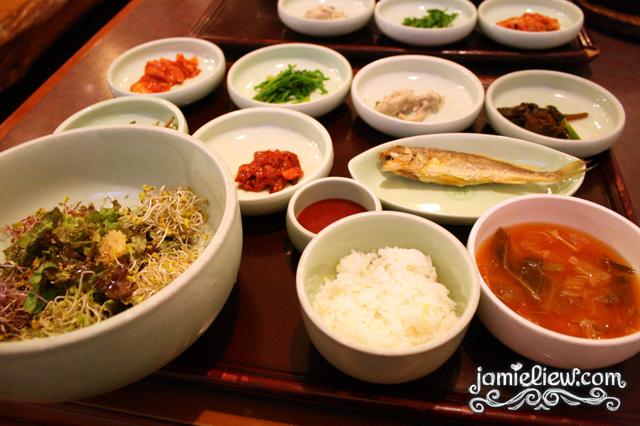 the menu includes a main course. oh by the way, those were the starters. when these came up, my cousin was like WHAAAAAA? he was already pretty full. hahaha. I ordered a vegetarian bibimbap which tasted oh so good. best vege bibimbap I’ve ever had. high class vege bibimbap that is. haha. it comes along with the many side dishes. and kimchi soup. and a fish. 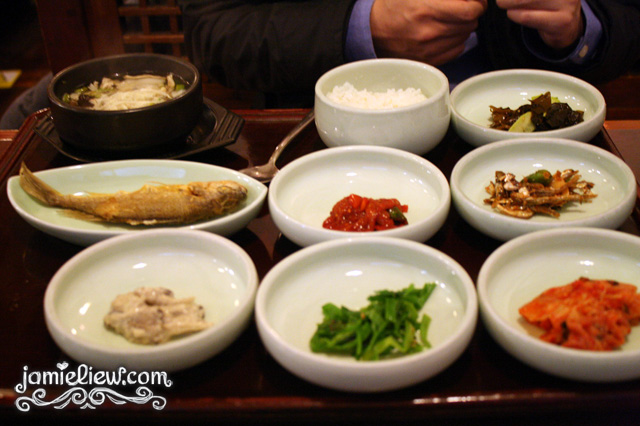 ordered a bowl of spicy mushroom stew for my cousin. there was one of this banchan (sidedish) which is like errr…. soya coated mushroom. so far all Malaysians I know find that dish rather weird. imagine, soya bean tasting mushroom =S. errrrrrr. and that vege is the worst vege I’ve ever eaten. say no to killing plants. we need more oxygen! hahahahaha.

and oh, they serve Ginger tea as dessert as well =3. 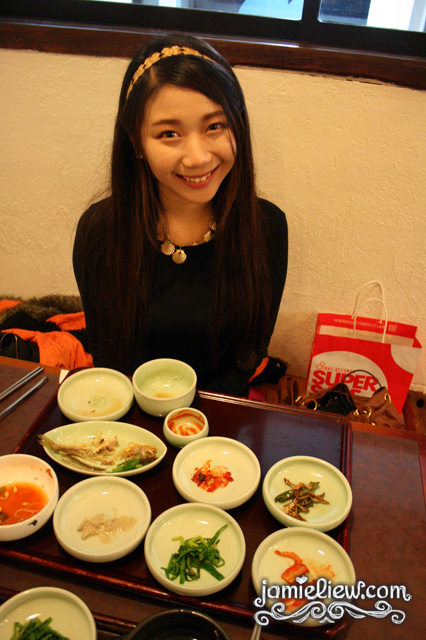 happy after my meal! as you can see, I almost finished everything but those disgusting veges. tasted so bad. it tasted like. celery. and worst. 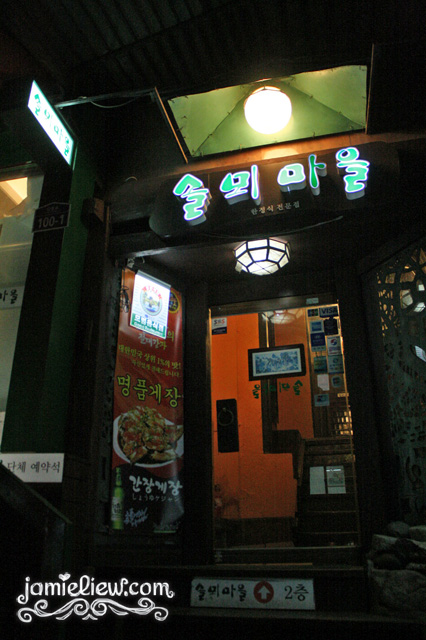 this shop that we went to is actually famous for their soy sauce crab (raw!) I’ve tried it in another shop and didn’t like it so much. rather sick of it after a while. not sure how to express it in English, but in Korean, 느끼다. or jelak in Malay. it tastes good first bite. but you’d get rather sick after a while. the shop is located at Samcheongdong. it’s on the Samcheongdong street itself you won’t miss it because it’s in the middle. =). on the right side of the road. 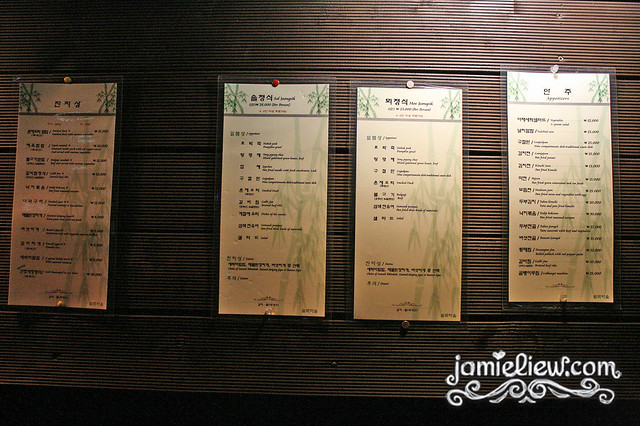 click and enlarge it on flickr if you wanna see the menu =). our menu was their best. pricing at 28,000won per person. the place is also a drinking place if you only want to drink. but you must order an Anju, appetizer. if you enter a Korean place and only want to drink, you should order an appetizer too. I call it alcohol food. they are not too expensive food sold for twice or thrice of it’s price. why? well, because basically alcohol is cheap in Korea and by charging you twice or thrice the price of the alcohol won’t make them any money still. 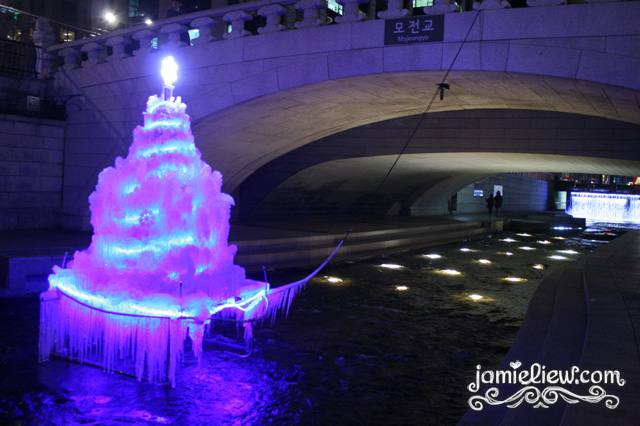 we later walked all the way to Cheonggyecheon stream. there was an….. ice Christmas tree in the middle of the stream. awesome. it was real ice. it’s that cold here. =/. 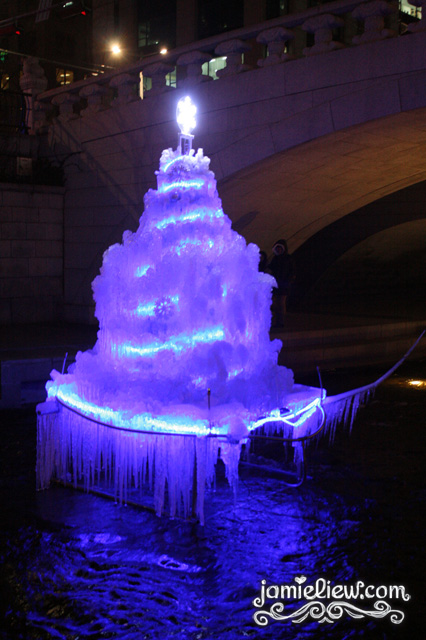 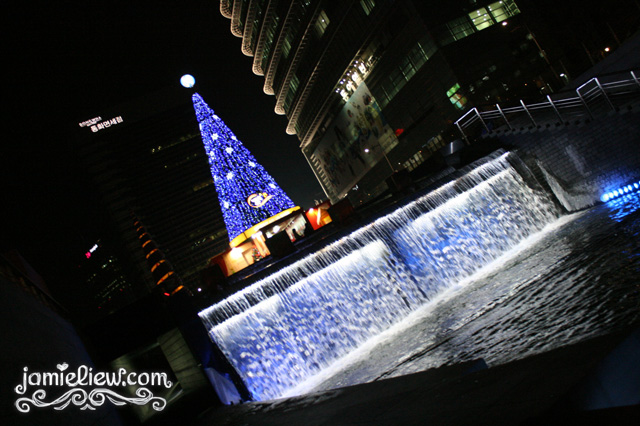 anybody who visit Korea MUST visit Cheonggyecheon. it’s too pretty not too. best for dates IMO. 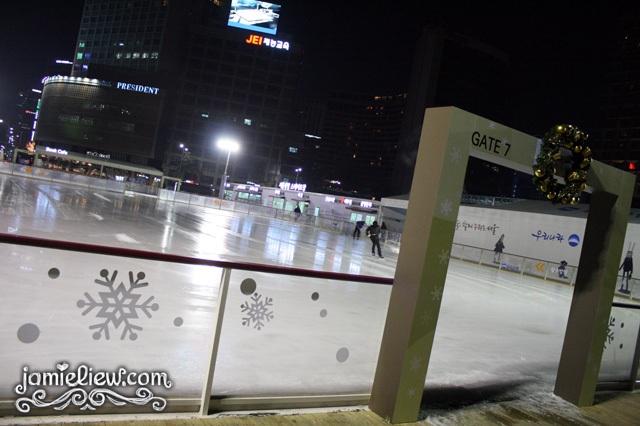 the outdoor skating rink in front of City Hall Station! 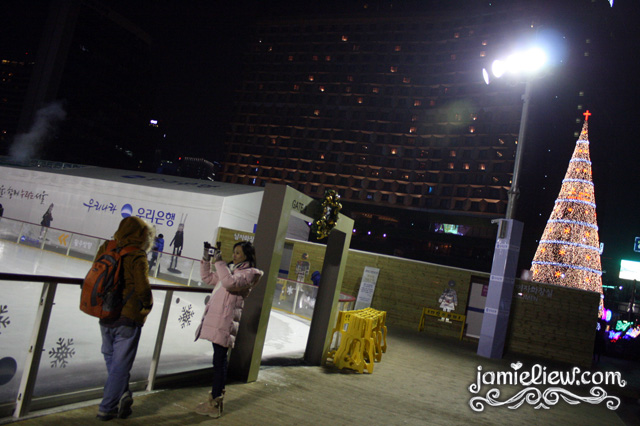 and that huge Christmas tree next to it. 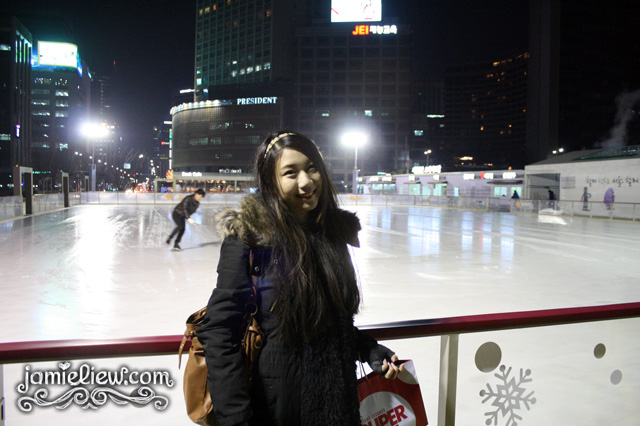 I’ll be coming to Seoul in March to commence my Korean language course.

Came across your blog while I was doing some research and I think you’d probably be the best person right now I can ask. I hope you don’t mind.

I heard that foreigners are not allowed to sign for data plan, is that true? Could you kindly share with me the mobile network options and how much would it cost, and which operator would be best?

I’m planning to stay in Korea for at least 1 year.

(Silly question next) For those who carry iphone/samsung s2, they just need to change the microsim after signing up with mobile operator right? No problems doing this?

By the way, when you applied for your student visa in MY, did you apply for C3 or D4 directly? How much is the fee?

Thank you very much for your input 🙂

Thanks Jamie. I don’t mind using prepaid, and since Korea is wi-fied everywhere, I guess it’s not too hard to gain internet access. I read your post on ‘What to pack for studying overseas?’, you mentioned that our phones (?) don’t work in Korea?

Jamie's friend who is often bullied

To add on to the phone thingy, yes you can get a plan and all that jazz. Just not an iphone, i have no idea why. But! you must first have an alien registration card. AND it depends on what visa you have. Full time students(D2) can get more types of phones compared to others.

Try to learn how to play skate ice until will good. Take chance.

Just wanted to point out 2 corrections re: your identification of Korean food.

1. MUK just means jelly. I guess you’re used to seeing the brown one, which is made of ground acorns. The white MUK is made out of ground, shelled mung beans. People usually just refer to it as MUK because as a Korean, you just somehow assimilate this information. If you want to be specific, then the white MUK is called NOK-DOO MUK and the acorn one is called DO-TO-RI MUK. There are also other “flavors” of MUK now, and you’ll see yellowish varieties, green ones, etc. The white one is typically served mixed with seaweed and the brown one is usually seen in a salad type. But the traditional way of eating MUK is just plain with seasoned soy sauce on top.

2. It’s fried zucchini, not cucumber. Koreans generally do not cook their cucumbers.

Hi Jamie, happened to find your site when searching for hanjeongsik.. do u have the address for this restaurant? thanks!