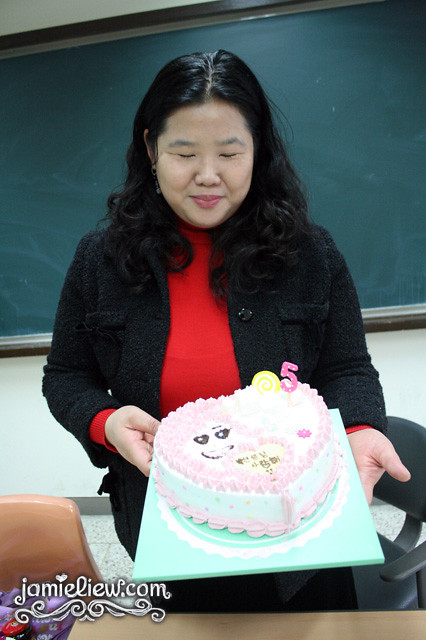 we all love our teacher a lot and we wanted to give her a memorable last day with us. so we gathered and made her a cake (decorating it only, actually.) and she was really touched =3. she went around boasting it to other teachers it was so funny hahaha. 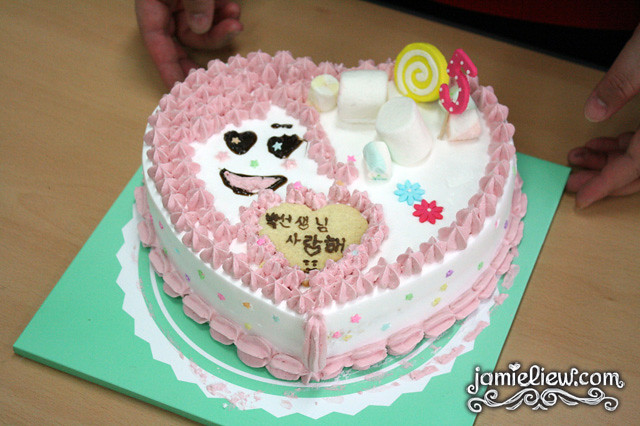 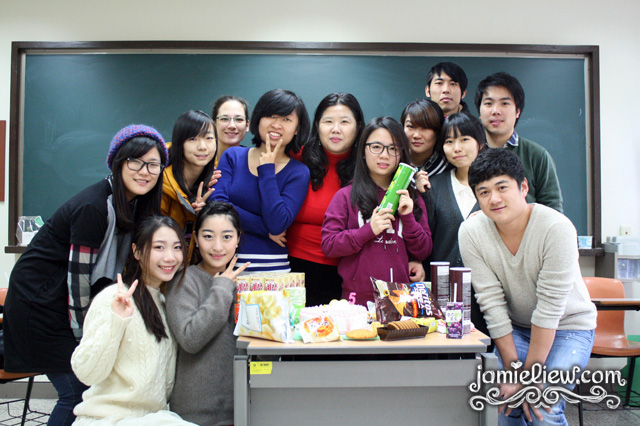 my classmates! though many of them are… always absent haha. I am the only one who hadn’t skipped a single hour. it’s just that I have been late for quite a few times. =S. 3 late = 1 hour gone. I think I’ve lost 3-4 hours from it =P. it was so difficult waking up in the cold! 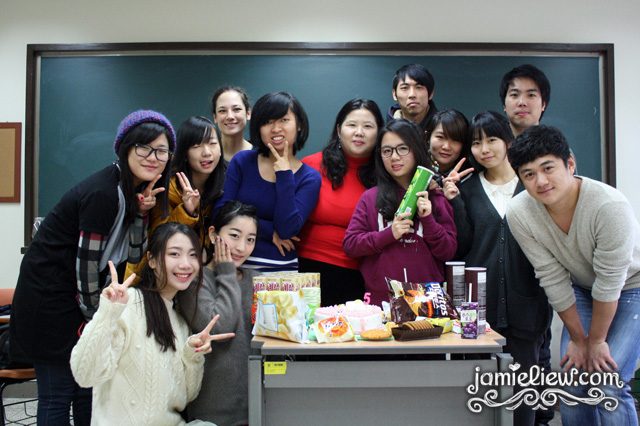 supposed to be “free style” but yeah, our class consists of people whom are pretty stiff. just like myself =S. 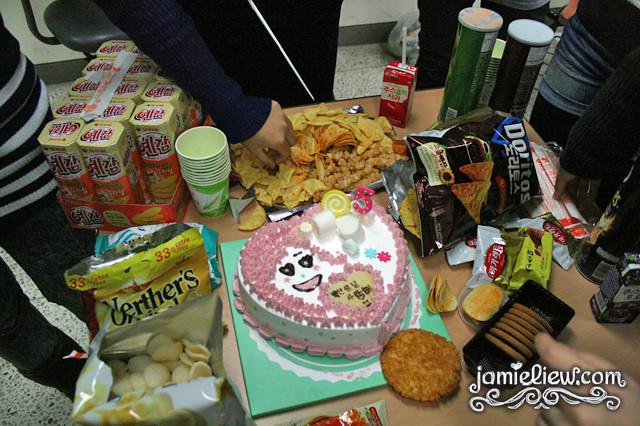 our mini party in class haha. 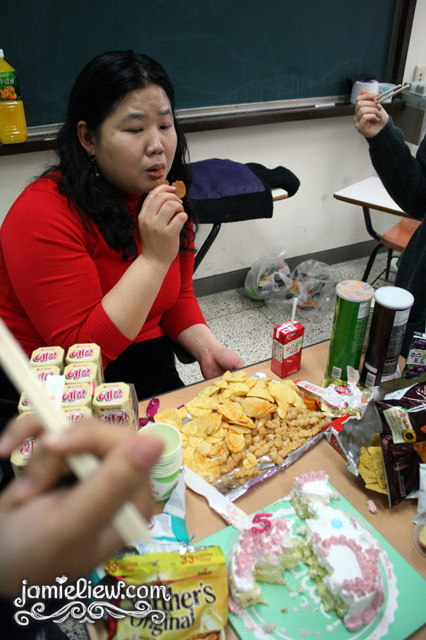 we ate the cake.. by chopsticks. so much win. 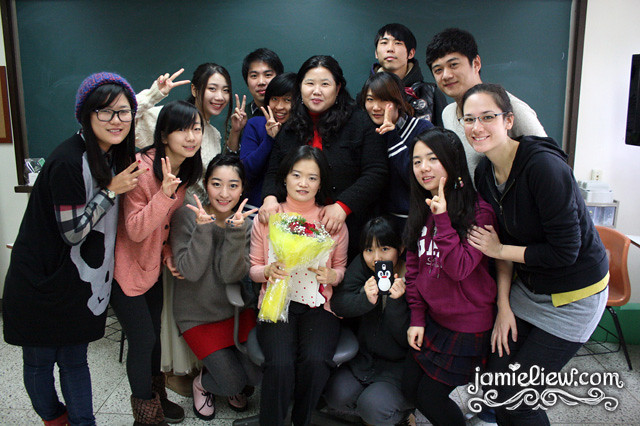 and our reading teacher with her bouquet of flowers! bloody expensive. dear future Yonsei KLI students. we thought we wouldn’t meet her so we only prepared a card for her but we forgot her class is right next to ours. T____T last minute we bought her a bouquet of not so appealing roses which costs 15,000won. normally it costs 10,000won for a reallllly pretty bouquet outside of school. they will jerk up the price like hell. so.. don’t buy it last minute, especially in school. =S. 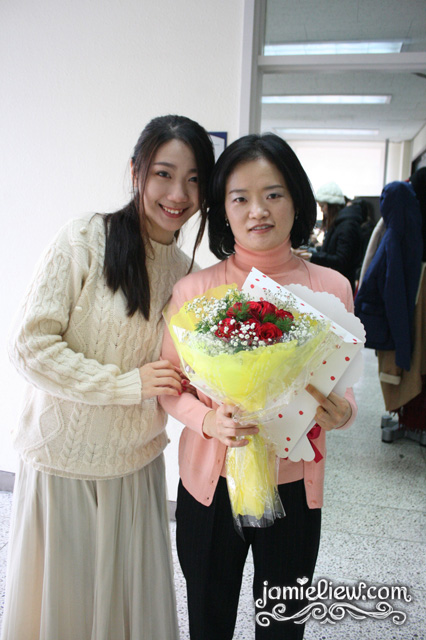 with our reading teacher! 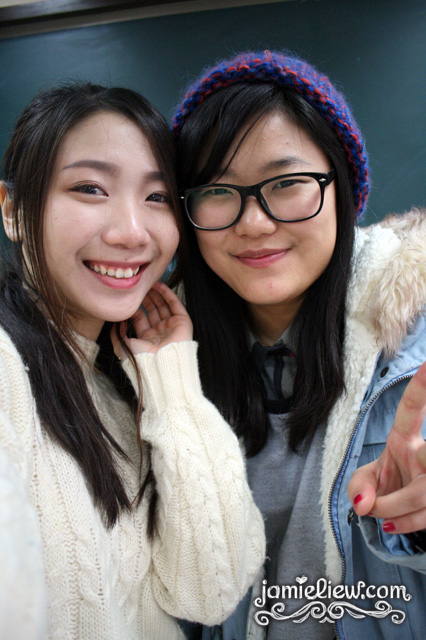 my classmate Yongdan from China! =D. 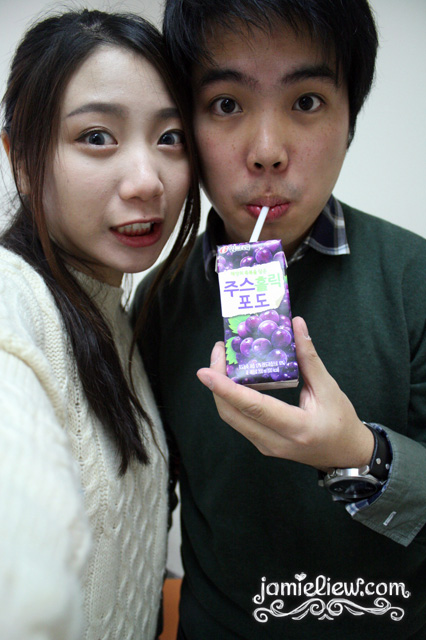 our class monitor Geoffrey from UK! 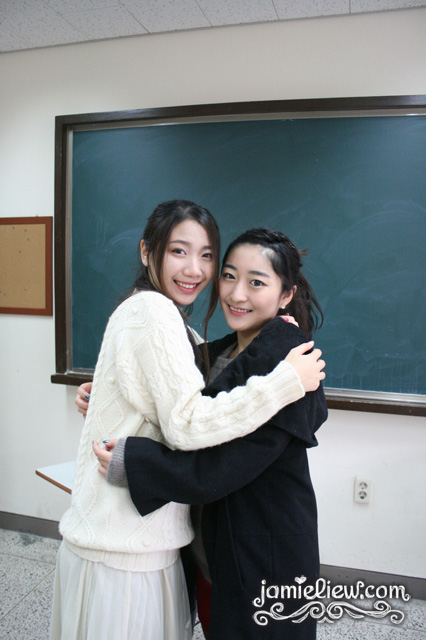 and the lovely Megumi! 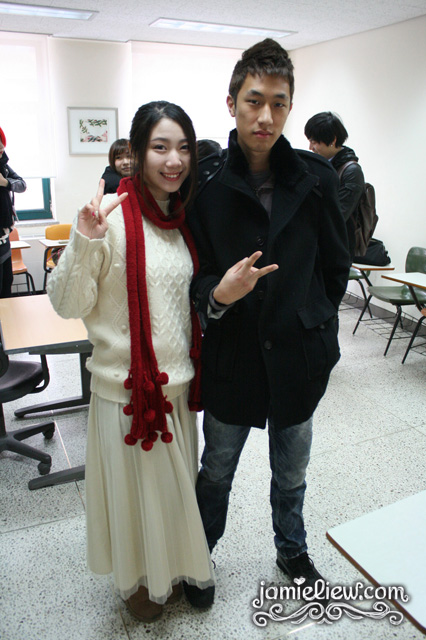 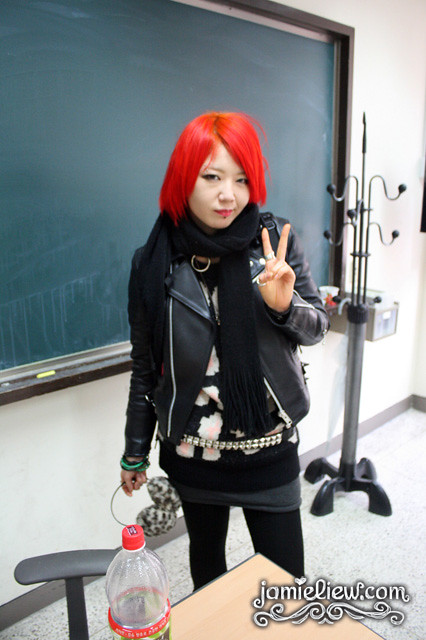 and Yoko.. she looks as if she popped out of an anime. she’s so cool D=! 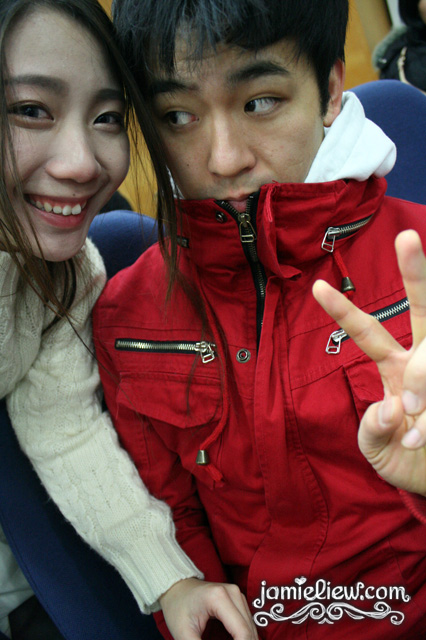 TOM!!! it’s been so long since we last hung out even the Baskin Robbins we frequented is under construction now. 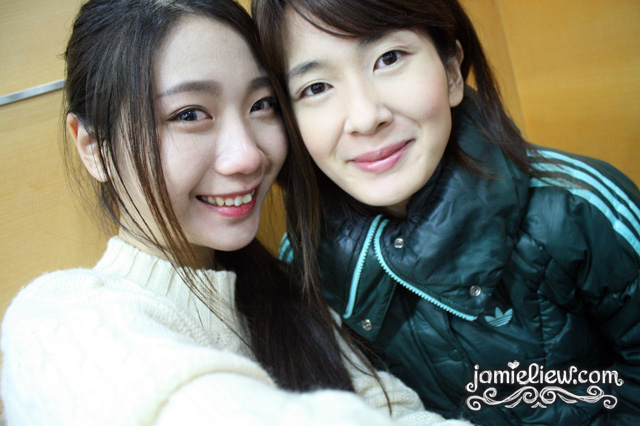 our class’s mom. literally a mom. Yuriko has a very very cute son and she makes us cakes occasionally with really really nice packaging! 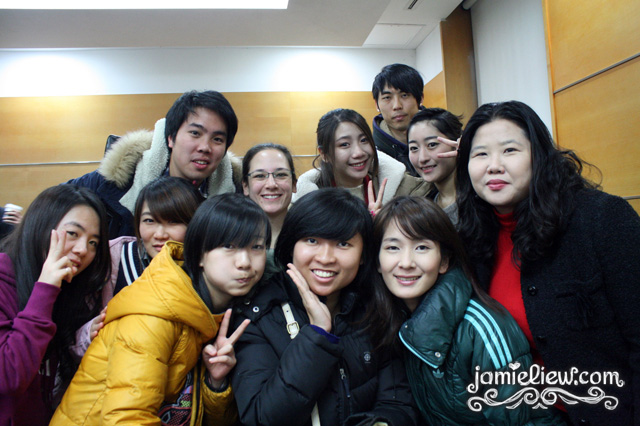 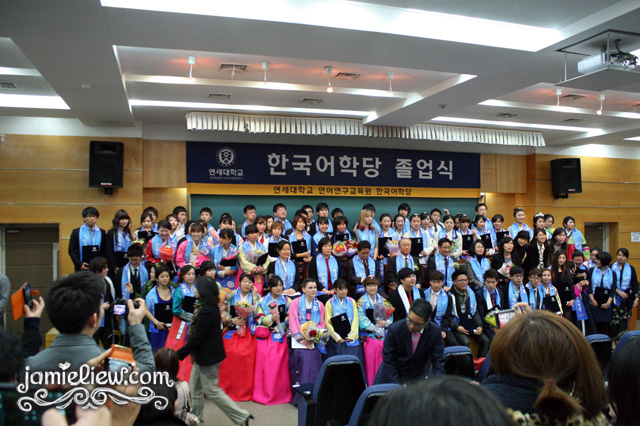 level 6’s graduation ceremony! I heard renting one hanbok(traditional clothing) costs 200,000won. that’s like 600ringgit. holy mother of. okay, oh well. I will either wear a dress or lend a hanbok from my Korean eonni =S. 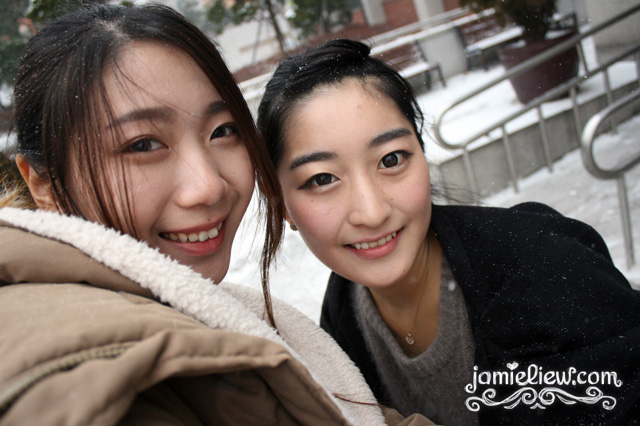 that day’s snow was.. like sand. it was so fine that it couldn’t be seen. and it looks like sand on the floor. 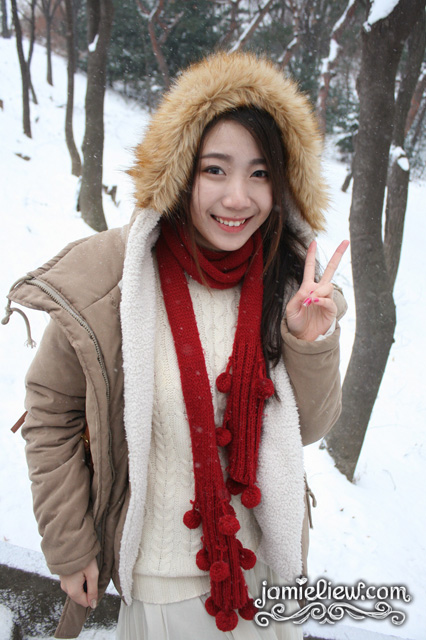 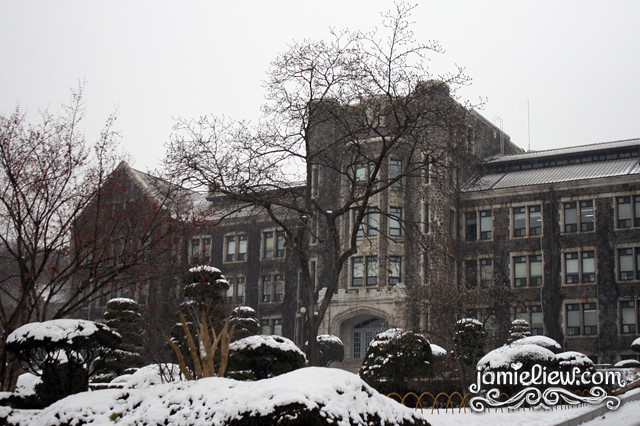 this is so Hogwarts. 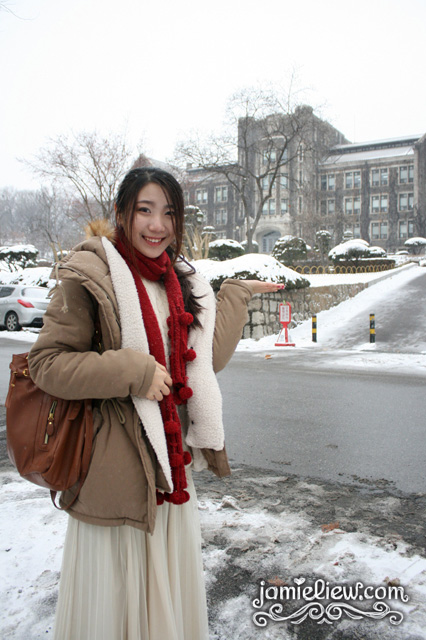 me and Hogwarts! haha. 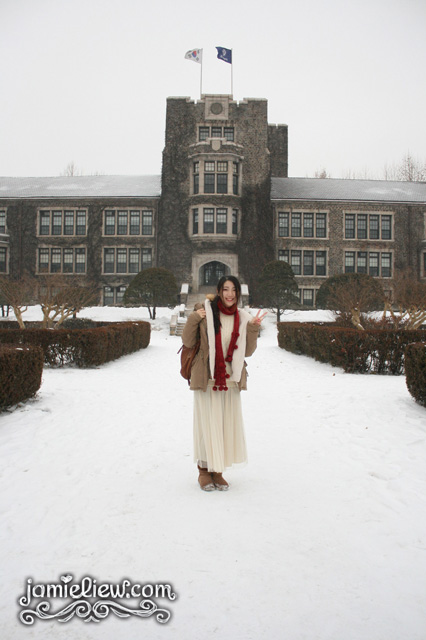 and the main building =D. 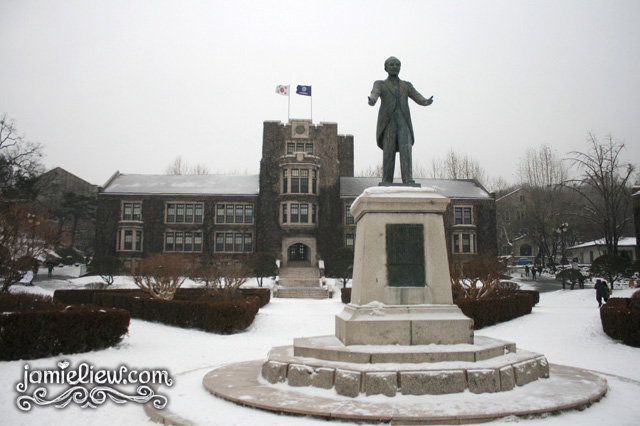 Mr. Underwood, the founder of this University! 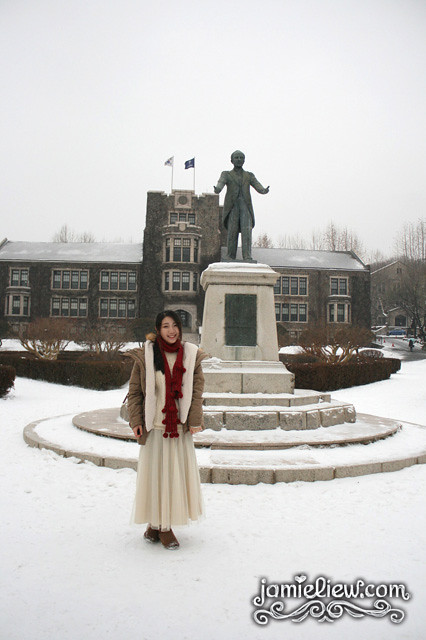 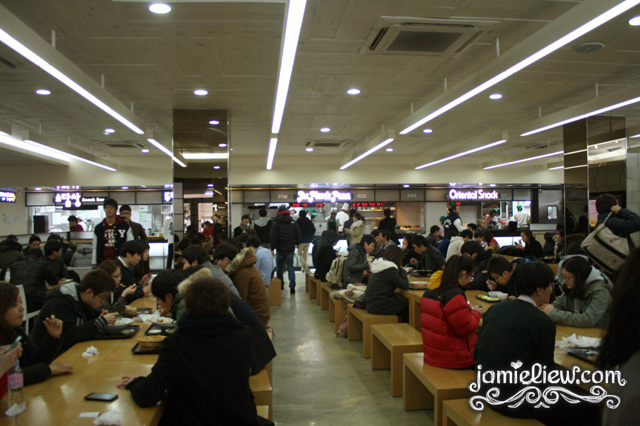 my favourite food court. you can say, in the world. hahaha. I loveeeeee this place. they sell like one of the cheapest food in Sinchon. not like it’s really cheap or anything, but for italian, it’s cheaper than food outside. and it tastes SOOOOOOOO GOOD. 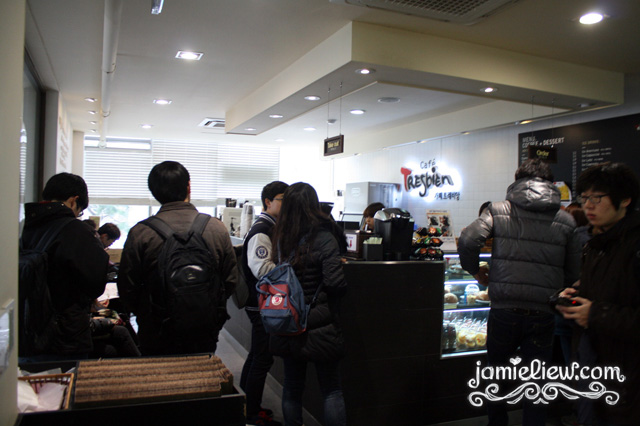 the cafe inside the food court. 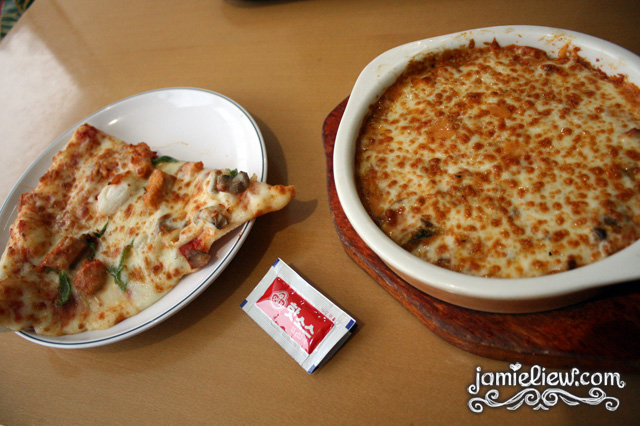 they sell all sort of stuff like Korean, Chinese, Fusion to my favourite ITALIAN!!! but no matter how cheap it is, it’s still 3,300won for a HUGE piece of pizza and 4,500won for the pot of Gratin Manzo =3. not cheap but considered cheap D=. but hey, LOOK AT THOSE CHEESE! 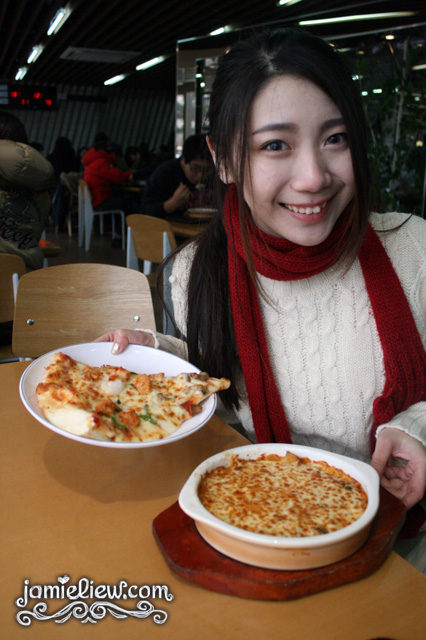 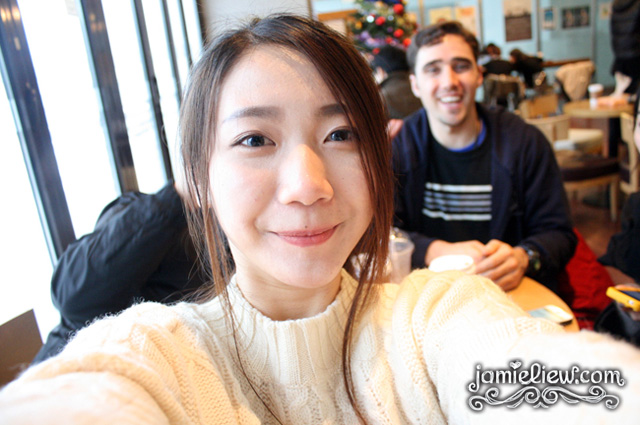 and meet Adam. we were talking about pedo bears and we googled a whole bunch of pedo bear pictures and this picture is like….. Adam’s being a pedo bear behind me. except I am too old to be pedo-ed by a pedo bear. 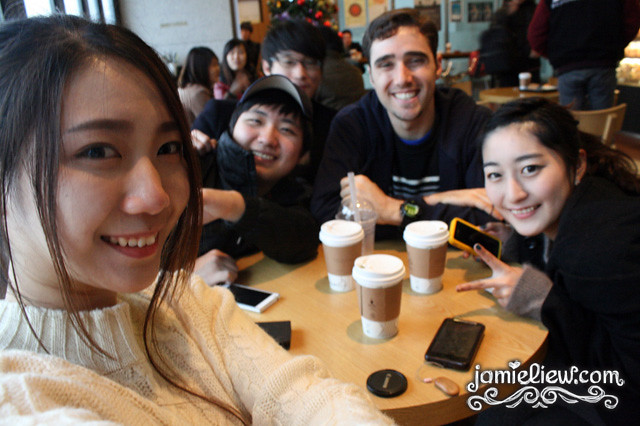 with Ian, his friend, Adam and Megumi! ^^. was quite a memorable day because I attended a few traditional dance classes organized by Adam and he… was looking for a seat in the canteen without noticing I was in that traditional dance thingy until I told him. it was while I was eating with Megumi and we had 2 extra seats on our table. and Ian speaks incredulously good english. I was impressed. D=. it was a funny day because we all watched Animes and was discussing about it except the true Japanese, have no idea about anything we were talking about. hahah.

i am a regular reader 😀 I read that u finished your korean studies is it true? congratz!

Hi Jamie, I’m a regular reader too. I love the fact that you blogged about (almost) every single experience of your stay in Korea. And I also love it that you’re a DSLR blogger. Thanks to your blog posts. They certainly helped a lot during my solo trip to Korea recently (came back last week! :D) esp. the Ewha shopping tip! Now that your Korean studies has come to an end, I hope that you wouldn’t stop blogging about your Korean adventure (or anything random about Korea).

Btw, where exactly is this food court you mentioned in Sinchon?

the snow looks fantastic! and so does your uni 😀

my name is Karyl, another Malaysian girl planning to go korea. so happy to know that a Malaysian girl having such an interesting life in Korea. I m more confident about my korean study plan after reading your blog. U r soooooo generous in sharing your every single experience and tips, really appreciate that. i just register for yonsei kli spring regular course. my school start from 1st april, wondering will u still be there that time? hope can meet u in person ^^ i will take your advice to stay in a guest house first and look for hasukjib when i arrive. any good guest house info around yonsei?