because my parents weren’t too into waxed figures when we were in HK so she told me “you will definitely come back here with your friends and you can visit it then”. but instead of HK, I came to the one in Busan. there’s one in Jeju too I think. 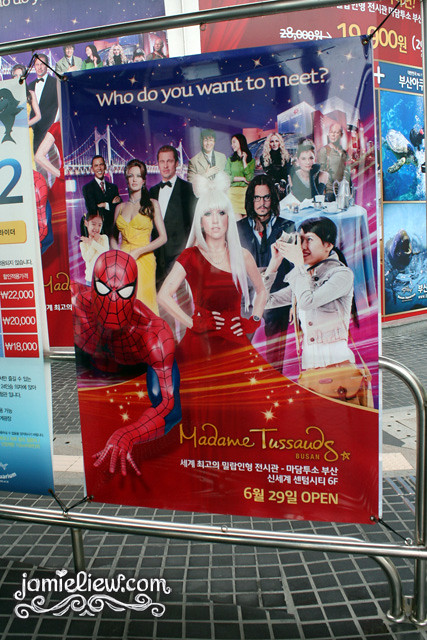 it just opened not too long ago when I went so I went in with a discounted price! 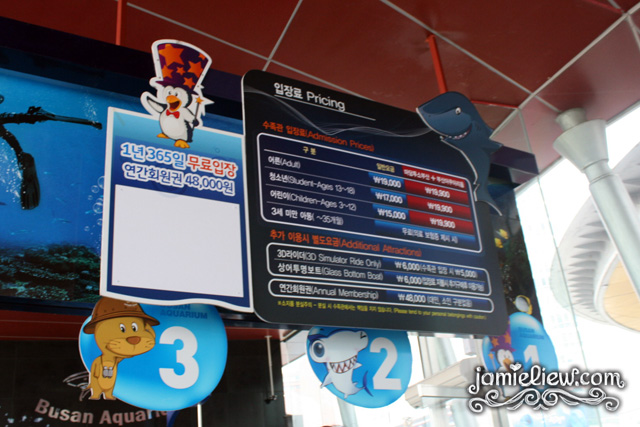 original price for the Busan Aquarium (at Haeundae Beach) was 19,000won. super bloody expensive but they had a promo which for 19,900won you can enter both Busan Aquarium AND Madame Tussauds (in Shinsegae). so, WHY NOT? just 900won extra. 2 places. not that bad. 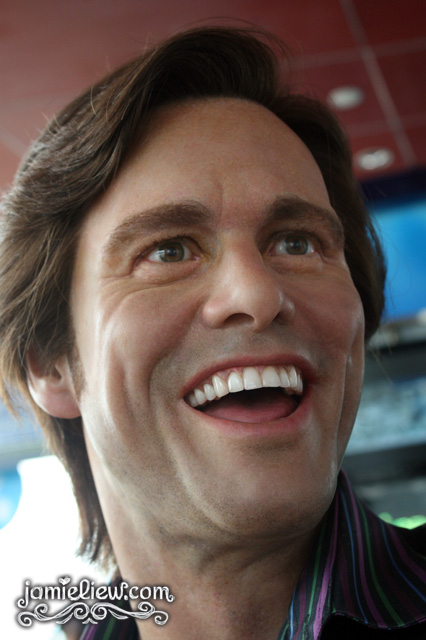 actually this wax figure of Jim Carey outside the Busan Aquarium made me want to get there. I will blog about the Aquarium next time, but for now, let’s head to Shinsegae. 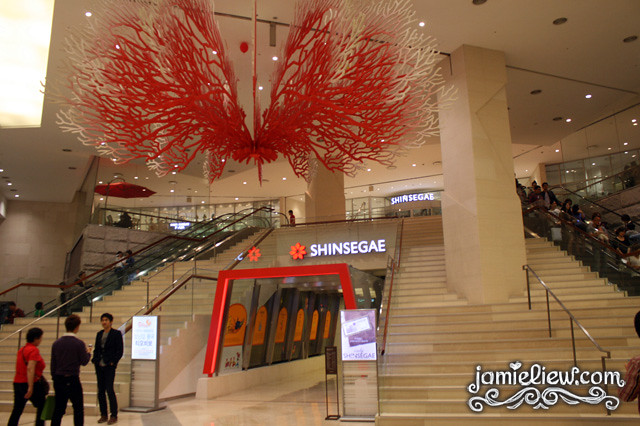 Shinsegae which literally means New Generation, is the WORLD LARGEST DEPARTMENTAL STORE. well, it’s also a place filled with top notch branded shops. even the food courts there are more expensive than casual restaurants downtown. T_T. and heck it is Busan. everything is supposed to be a little cheaper than Seoul =(. 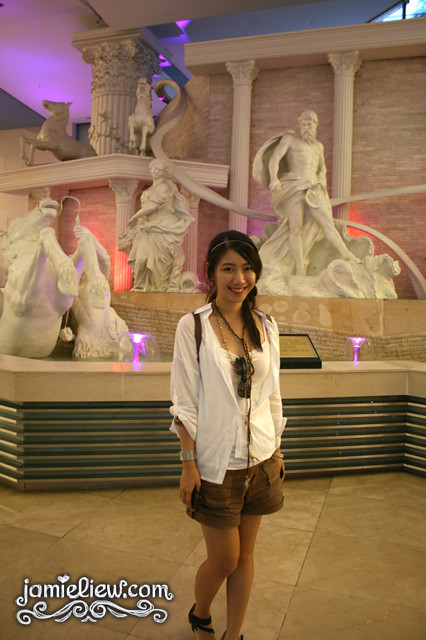 very romish. must take a picture with it.

I am not sure if it’s me who’s fat and short with a huge face or are the figures made too perfect. it makes me feel ugly. but they are supposed to be exactly like the person so….. *cries in a corner* 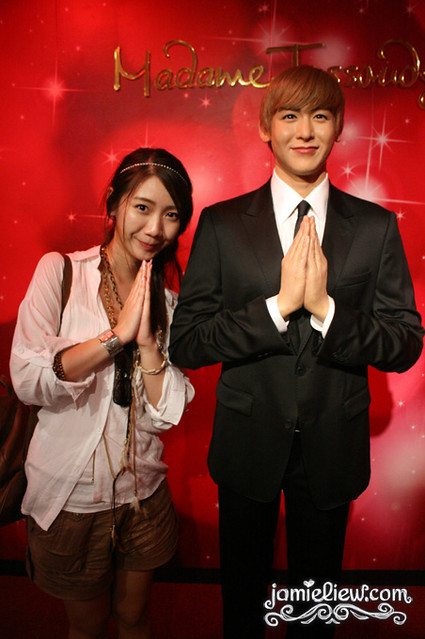 upon entrance there’s the Thai Prince, Nichkhun or 2PM! he’s so tall. of course, I weren’t wearing heels but it feels like he’s 185cm. 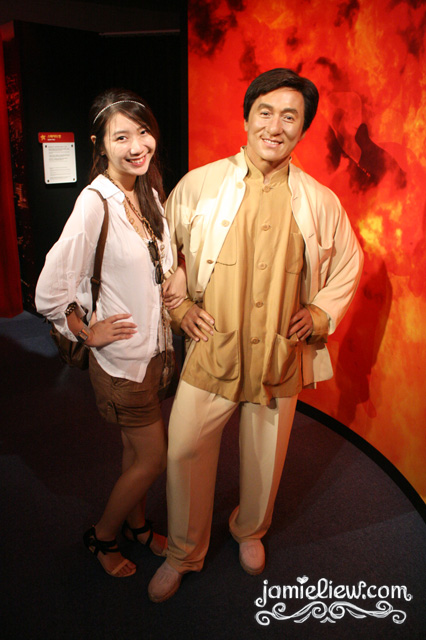 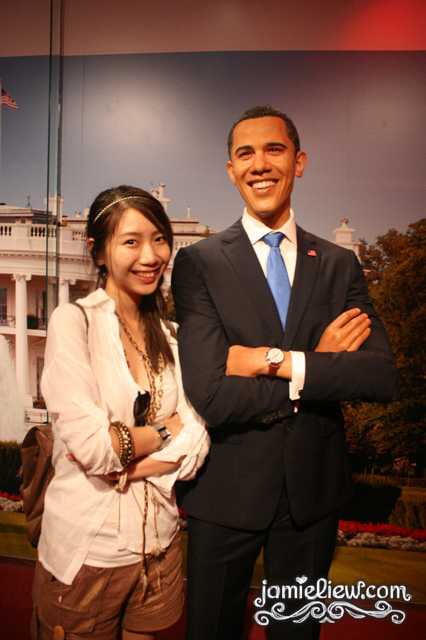 Obama has the tiniest face! 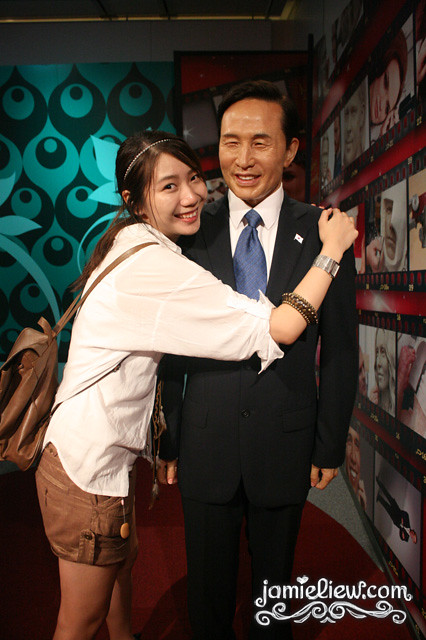 with Koreas current president. although the election is almost over and there will be a new president REAL SOON. 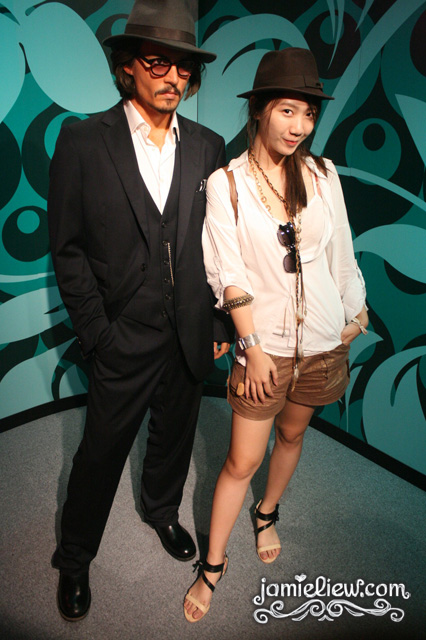 not so captain Jack Sparrowish. 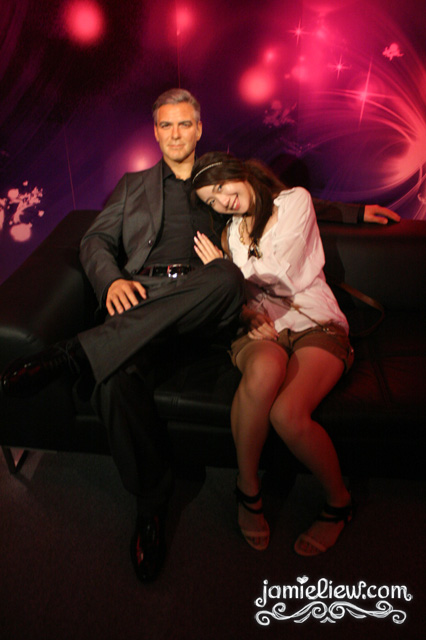 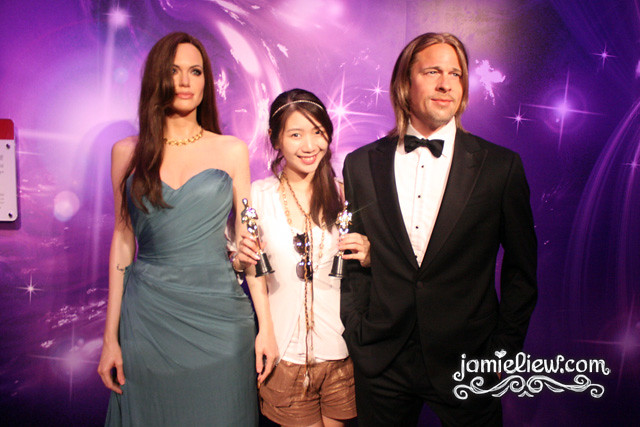 how can Angelina Jolie be that tall and have a face that small. of course, she wore heels but she’s still crazily tall! 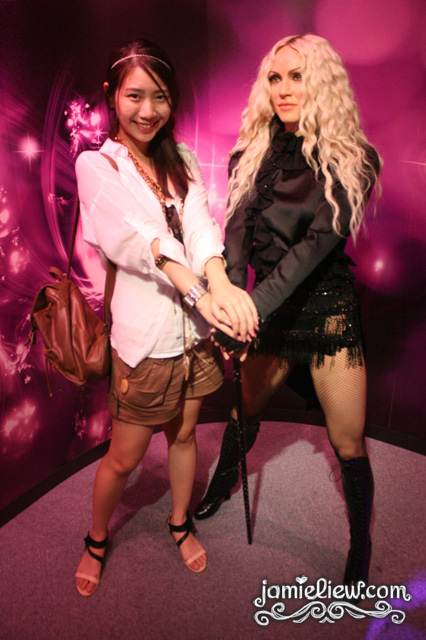 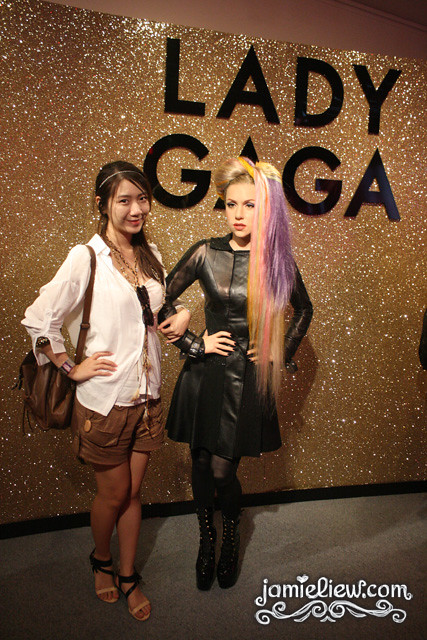 I thought she was Christina Aguilera at first glance. 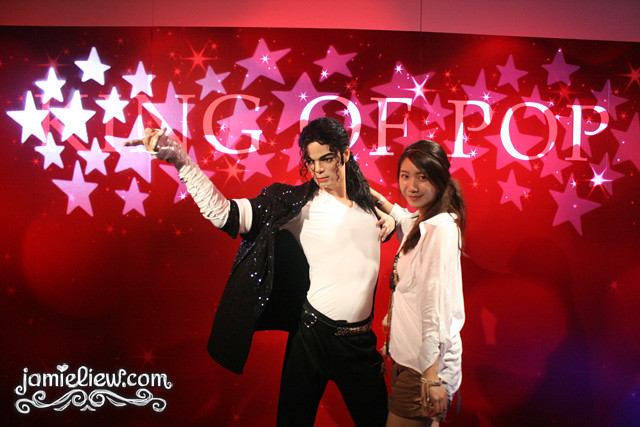 thanks to Madame Tussauds, I got to meet the legend and have a picture with him. 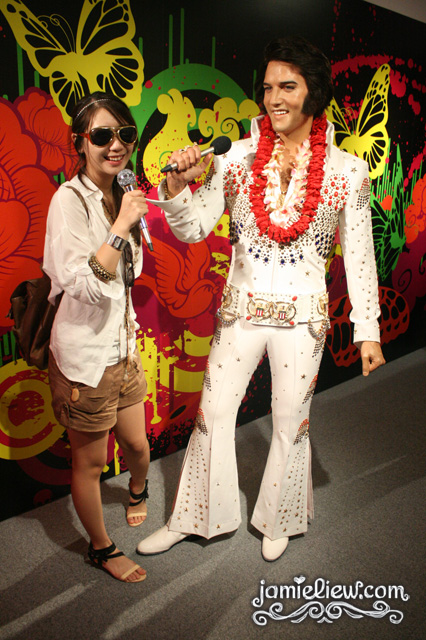 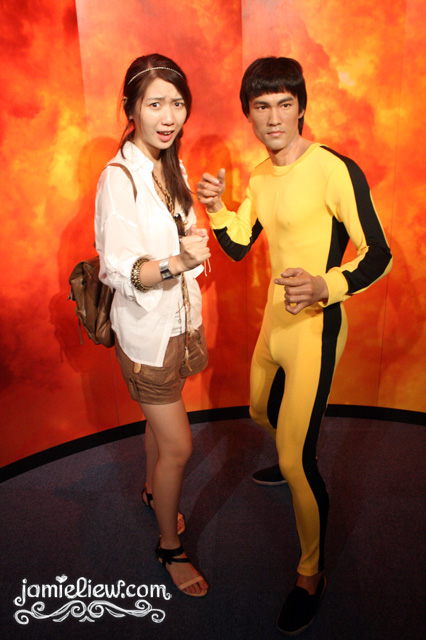 I am guessing there’s one Bruce Lee figure in every madame Tussauds. 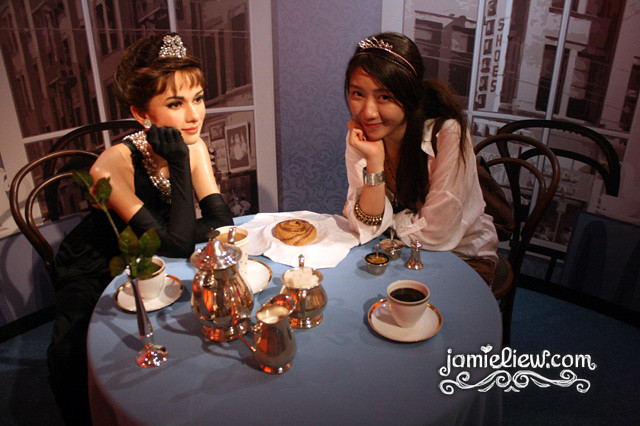 Audrey Hepburn! I haz a crown too. 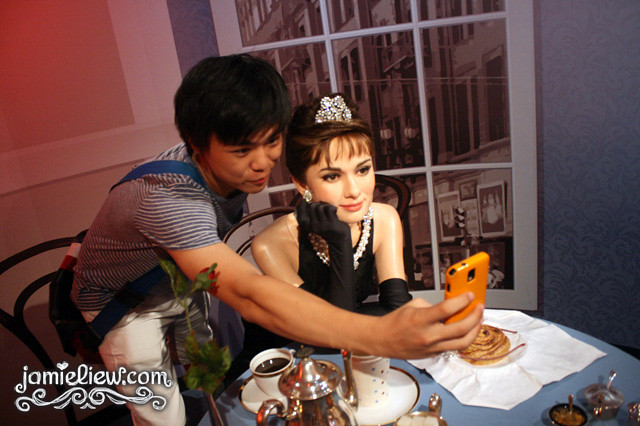 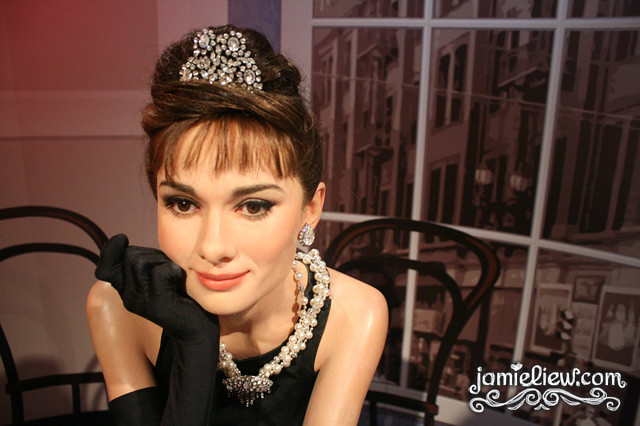 but they didn’t make her too real =S. her arms are so waxy. 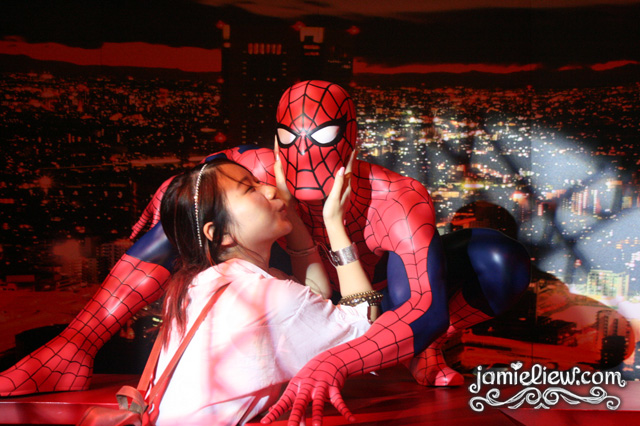 absolutely fake looking but just for the fun of it! 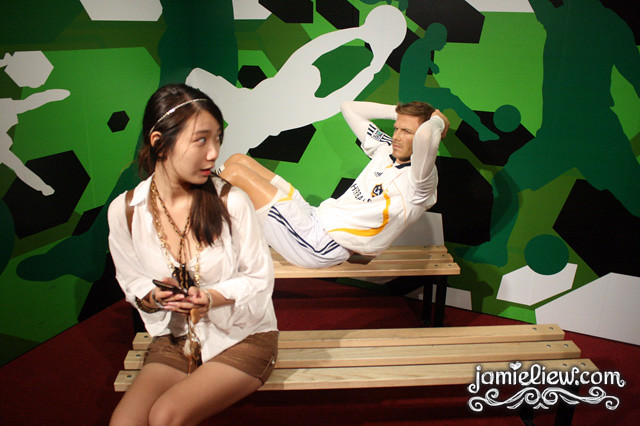 and my favourite picture of the day. not that I am a fan of David Beckham, but it’s nice if I could turn back and see a hot guy behind me exercising. =D. no?

it costs only 10,000won for a normal entry pass so I guess it’s considered cheap as the others are over RM100 as I’ve remembered. but the one in HK has much more I can confirm as I have uploaded almost all of the figures above. maybe 2 left. so that’s really all. =S. very tiny. doesn’t have Yaoming nor Tiger Woods. PFFT.

I think the hot old man is George Clooney…and no Bae Yong Joon? They had one in HK.

Hi, what do you plan on doing after u graduate from KLI?
I am nearly done with my level 5 and I am stuck with which uni to go to..
Yonsei was my ideal choice but its gonna be difficult to enter…

Some shots of yourself reminds me of park shin hye! Very pretty 🙂