one of the things I’ve always wanted to do is hike up Namsan Tower during Autumn and I did! well it’s already winter now but you can do the same for Spring, Summer or Autumn because it’s a good time to hike up. I took the cable car before and I think it’s an utter waste of money and time. why do I say time? because the queue is madness. why not just enjoy the nature while hiking up? it isn’t as difficult as it may seem. I am a weak girl who doesn’t ever exercise and I am saying this so you can take my word for it. but if you have an elderly with you of course taking the cable car (or the taxi) would be a better choice. 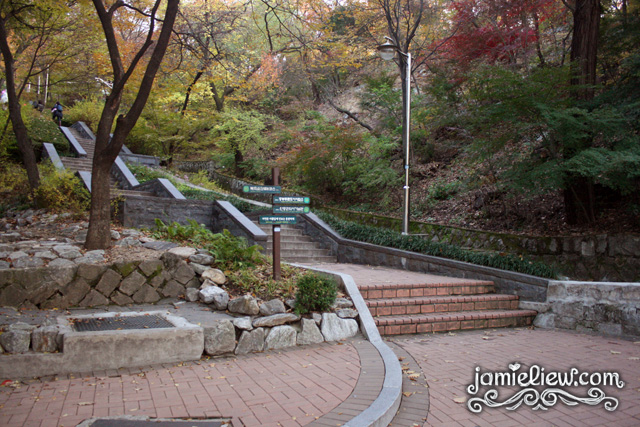 I blogged about the directions before so look for it at my older Namsan posts! but anyway, this is the start of the trail. many trees still green. either that or bald. the weather this time around was pretty bad because it rained so bad and the autumn leaves fall so quickly. 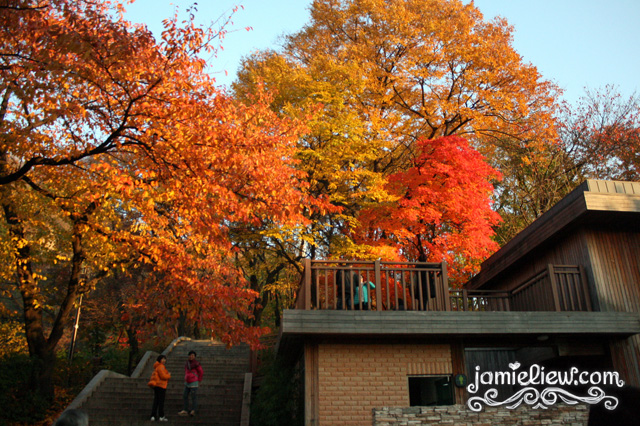 but hiking up a little, I saw something so beautiful it took my breath away! =D. 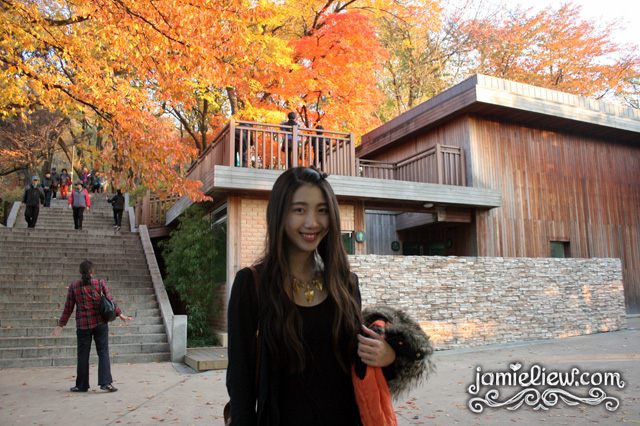 must take picture with it pfft except it was too dark down here. 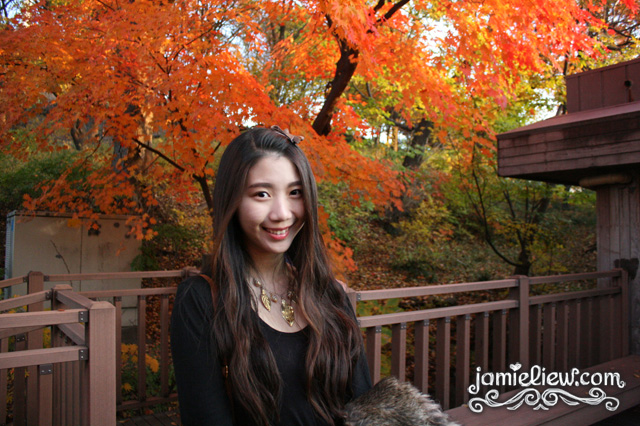 so took another up there. super fat. must diet. 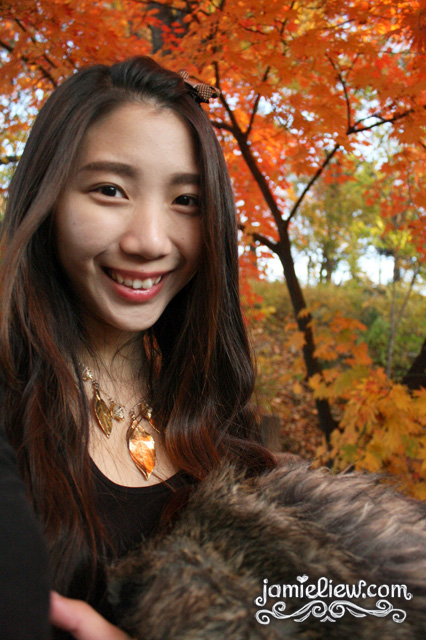 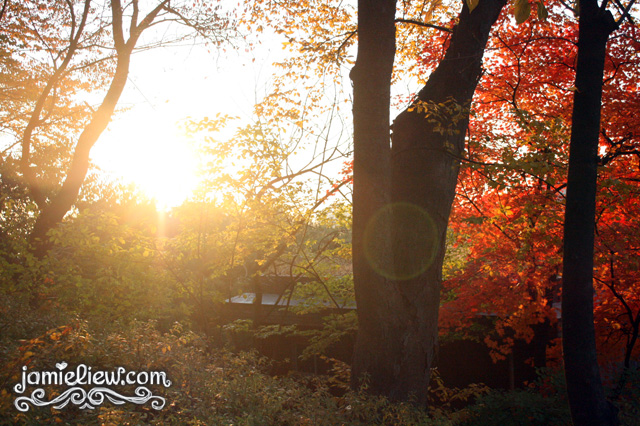 it’s so pretty I didn’t want to leave but these China tourists were hogging the place for 15minutes take group pictures one after another and I was forced to move away pfft. 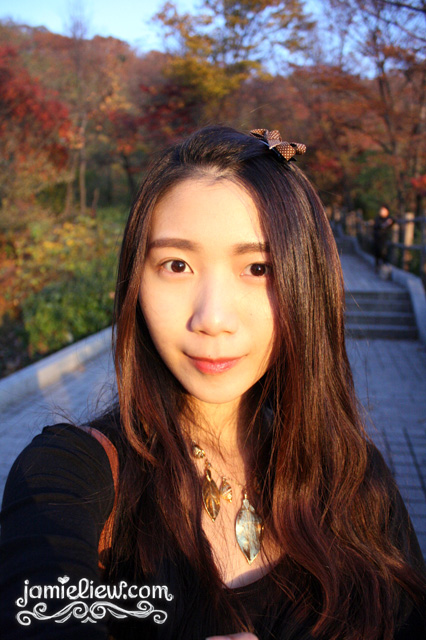 sunlight is like the best thing that you can ever have on a cold winters day. not then but.. now. it’s super duper cold help me please. 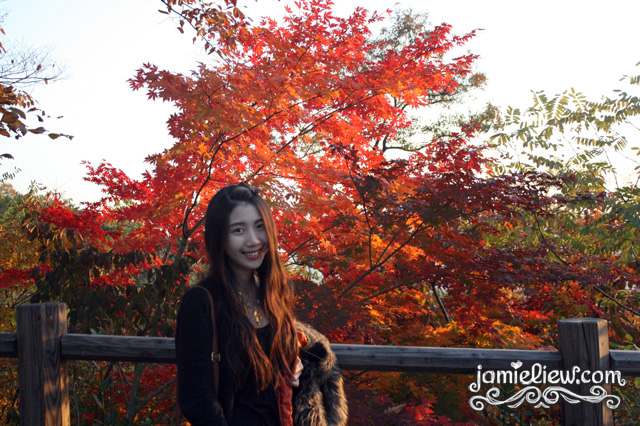 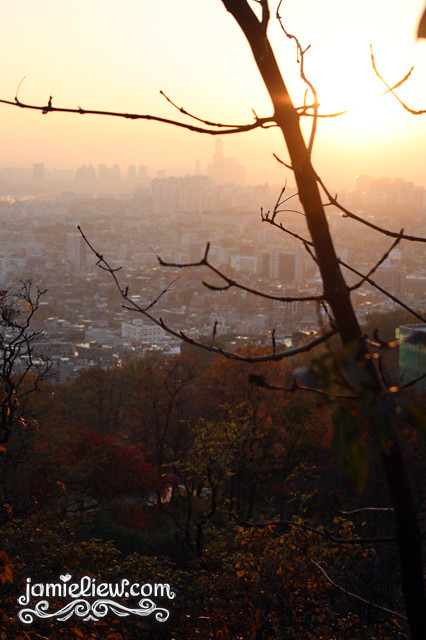 look from the “halfway” stop! 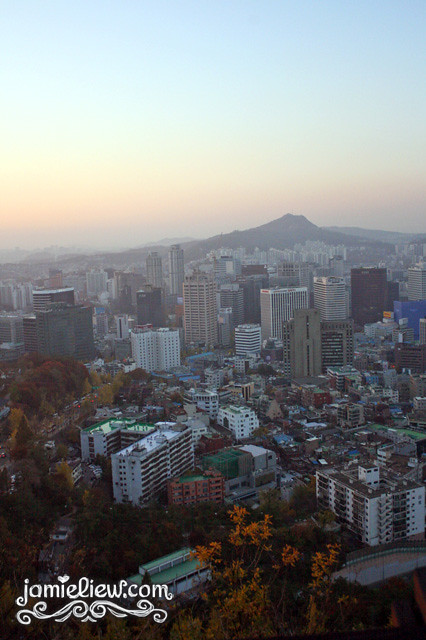 and a clearer view. 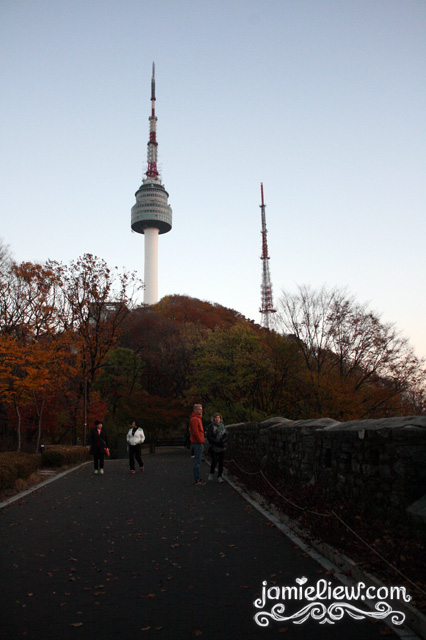 from here, it’s really near. but the last few steps could be pretty tiring =S. but it’s beauty paid off =D. 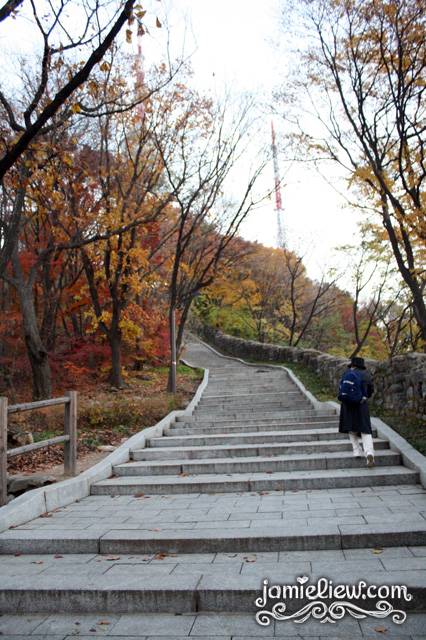 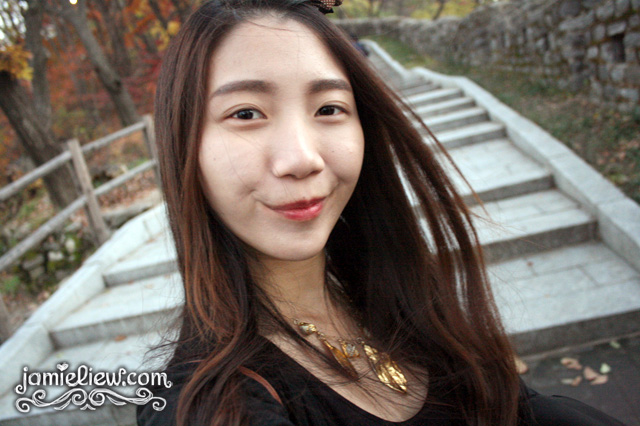 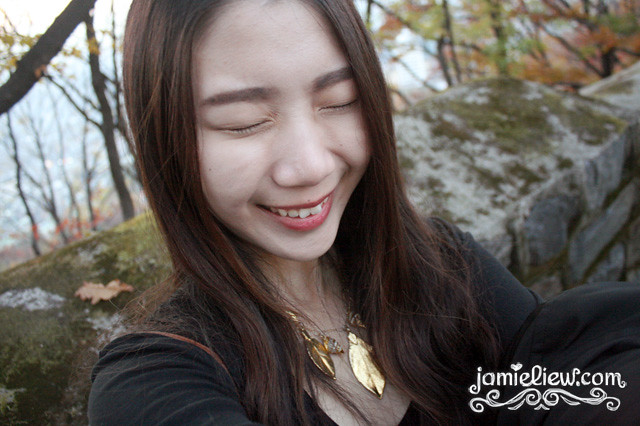 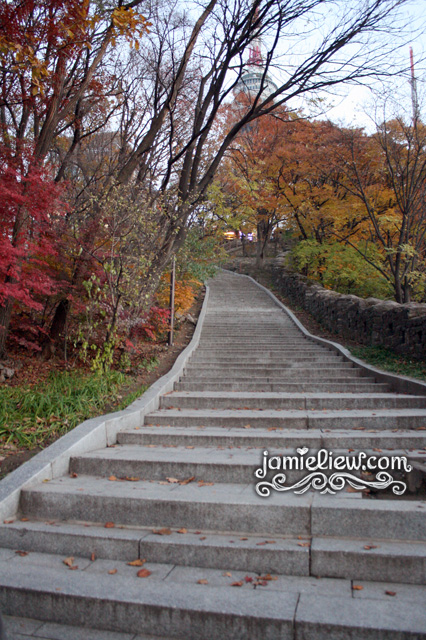 the trees by the side looks much better in reality. it’s just that I wasn’t quite good of a photographer. 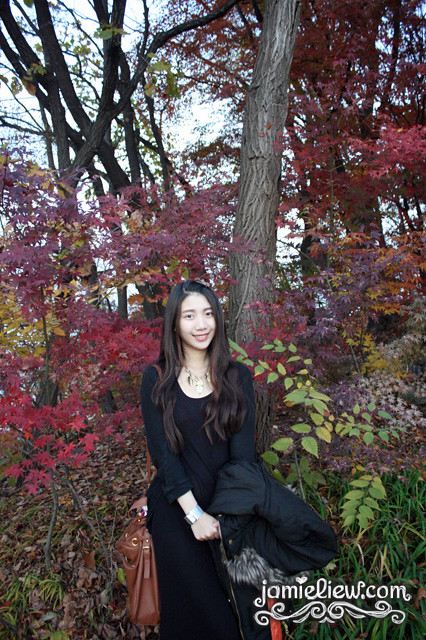 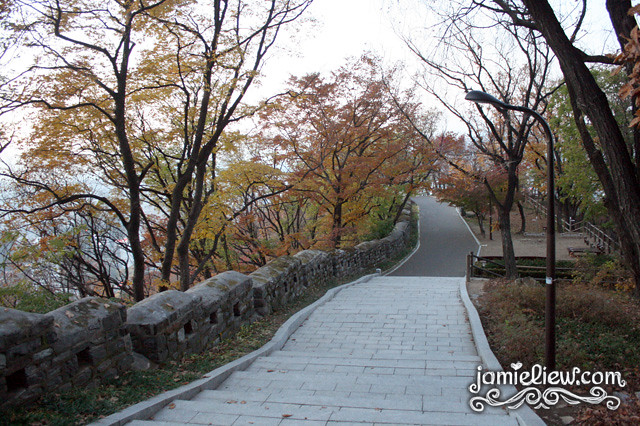 looking back. looking down. 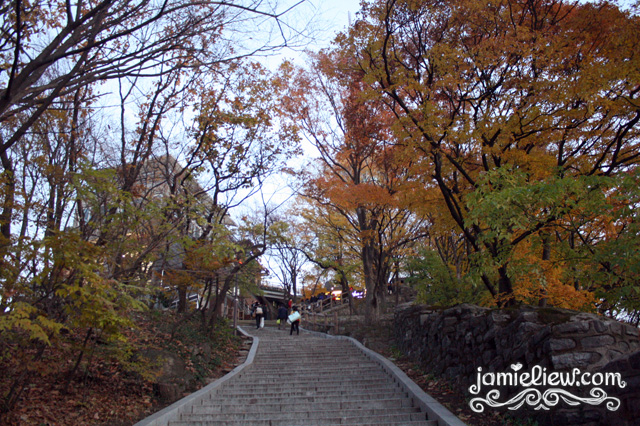 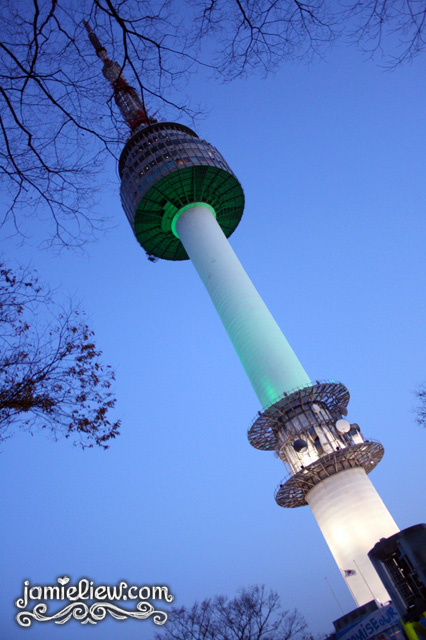 TADA! we’ve arrived. it got dark pretty quickly. at around 5.30. so I’d suggest you to go earlier =S. temperature drops right away as well. it was about a little lesser than 10degrees even in the day. 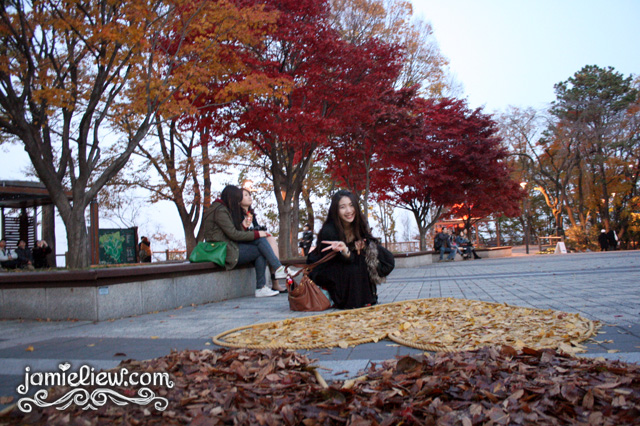 hearts, everywhere! Seoul is no doubt a place for lovers. where’s my boyfriend? pfft. 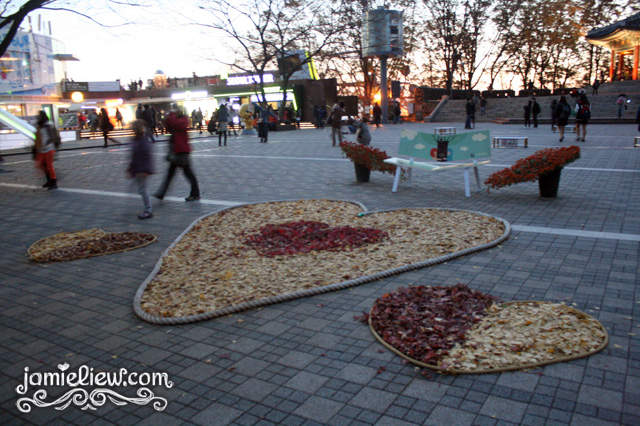 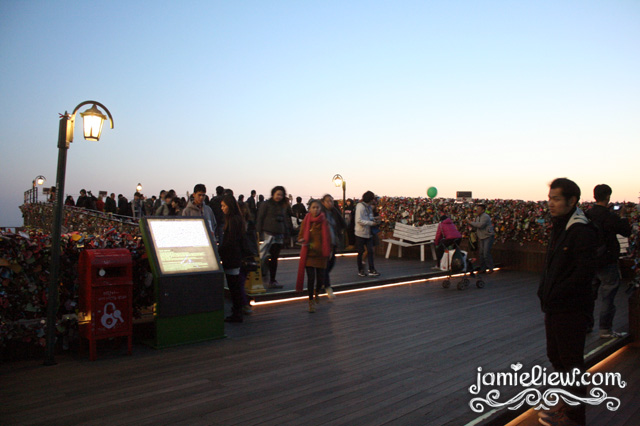 that deck with millions of couple locks. to prevent you from polluting the area with keys, they made this letter box for you to drop your keys into it. the meaning is that so that the lock can never be unlocked. but they clear locks like yearly at some areas so I really do not get the point. find some real rusty lock areas and lock it there, it’ll probably be there for a long time =D. 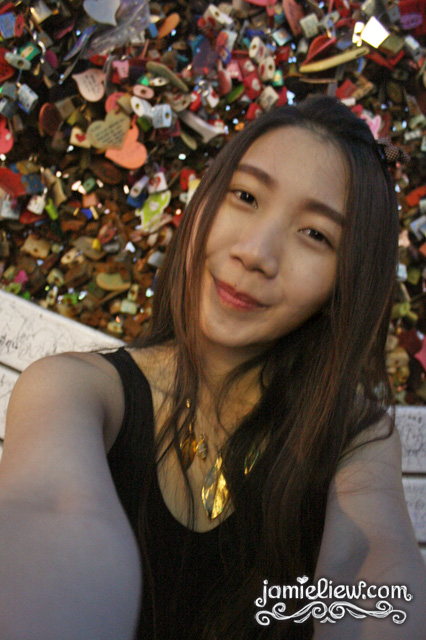 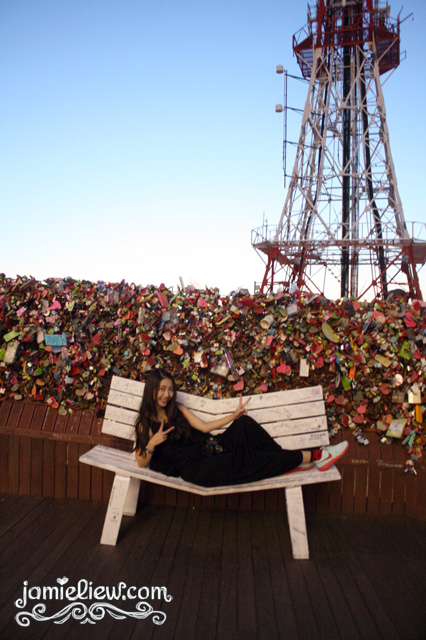 just me being myself. =X. 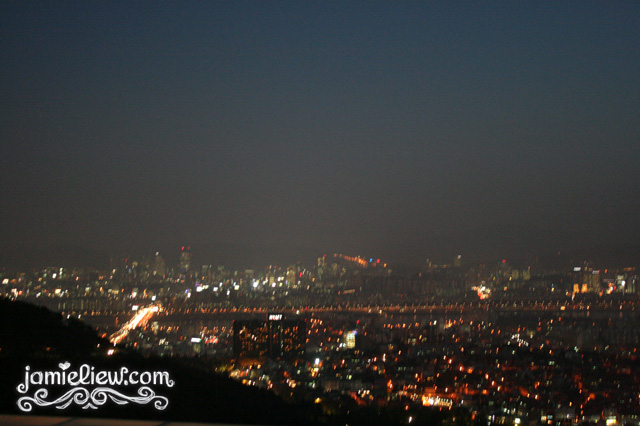 night view from the deck! 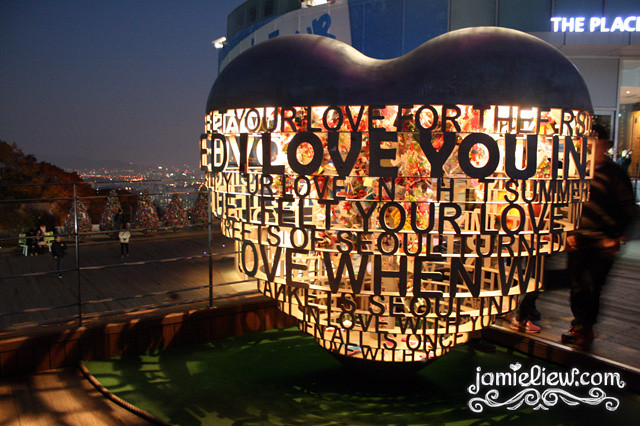 a new sculpture. whoever who got their locks inside is mad haahaha. 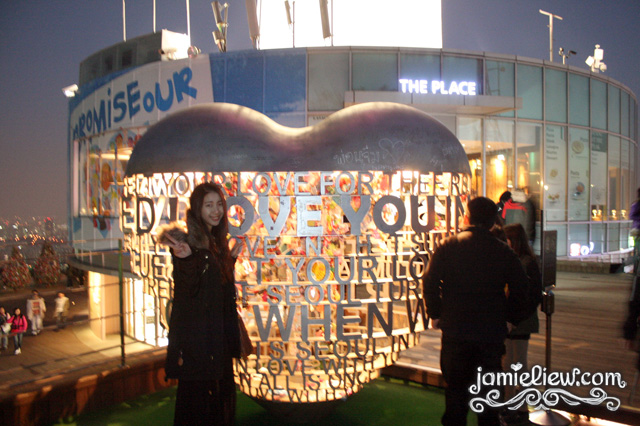 okay that’s all for now.

will blog more but I had really been busy. it’s the end of the year and I’ve been travelling. to Busan (again) and Cheongju (went to visit Kim Tak Goo’s bread shop and Yeonggwang-ii-ne’s noodle shop hehehe. but didn’t have enough time to catch a lot of pictures. well if you still wanna see it I can show you hehe.)

i wanna go there right now! i’ve been watching the last part of boys over flowers where gu jun pyo lit up the whole place for geum jandi. looks like namsan tower looks so beautiful up close. were you able to try the cable car too? i can’t wait to read your post about kim tak goo’s bread shop. is it in seoul too? a blessed new year to you jamie! you’re officially my favorite blogger for 2012 and beyond! 🙂

OMG it’s so damn nice!!!!! How I wish I can go thhere :(:( btw how long do you take to hike up there? Looks so tiring but I believe that it’s totally worth it that the view is so breathtaking!!!!!! <3 Nice post!

Lovely photos dearie!! 😀 Btw, one of the towers look like KL Tower *ahem* THAT YOU’VE NEVER BEEN 😛 😛

may i have the direction to go to the base where you start the trail? i would love to do the hike up instead of cable car since i have taken it before on my 1st trip. thanks!