I was lucky enough to get my tickets for Inkigayo (famous for being super difficult to get. but because this time they give priority to tourists that’s why I got it.) thanks to KTO (Korea Tourism Organization). lucky I applied from 2 different sites at least I got one U_U. it starts at 3something but I was there since 1pm. and to my surprise, I live only 10 minutes away from the CJ Entertainment and SBS building by bus. 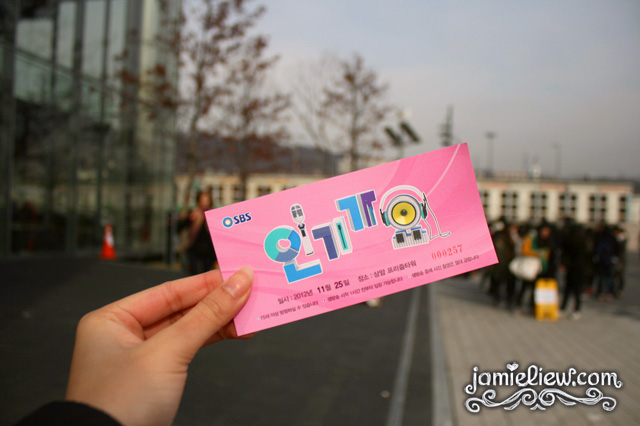 they are really systematic. you gotta even line up according to your ticket number. 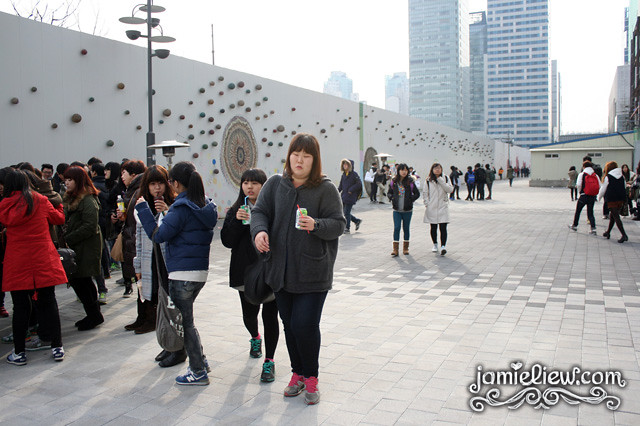 I did not take a picture of her on purpose pfft. but just to show you how adorable the dividers are. in Malaysia construction sites are always hoarded in blue but here it’s like super duper creative. 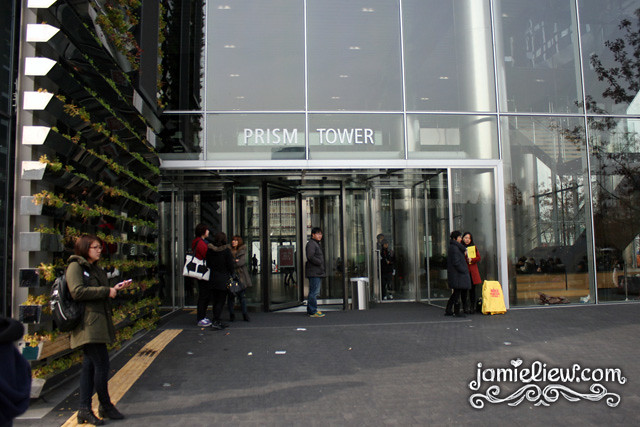 I actually came the day before because I mistaken 25th to be a Saturday. I am always very careless sigh. well it’s at least better than being there on Sunday when it’s Saturday. this is actually the entrance. the day before I even walked in and strolled around but I guess they do not simply let people in when there are artists in there. 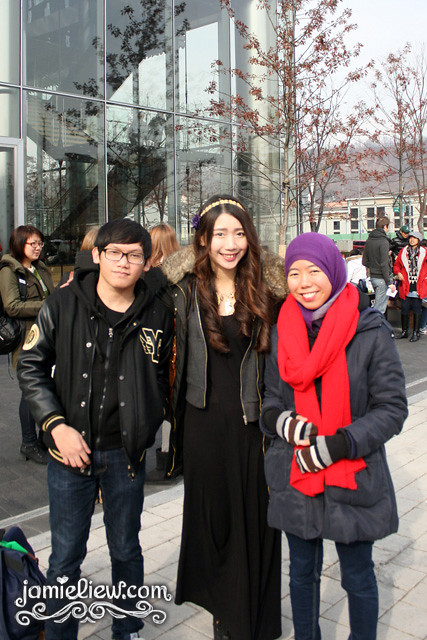 and I met Malaysians here! there are much more but these two are the ones who were really nice and we chatted away to kill time while waiting. was surprised that a reader recognized me (thank you! T_T). 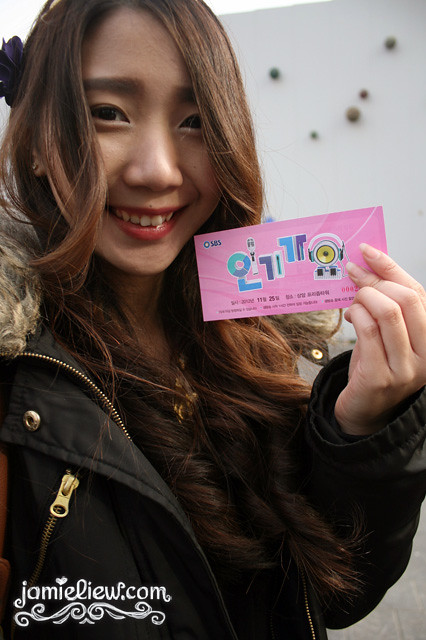 last picture I can have before going in because taking the DSLR out is almost impossible inside with their tight security. their security guards are quite harsh on fans. well if they aren’t like that… the mad fans will not listen I guess. 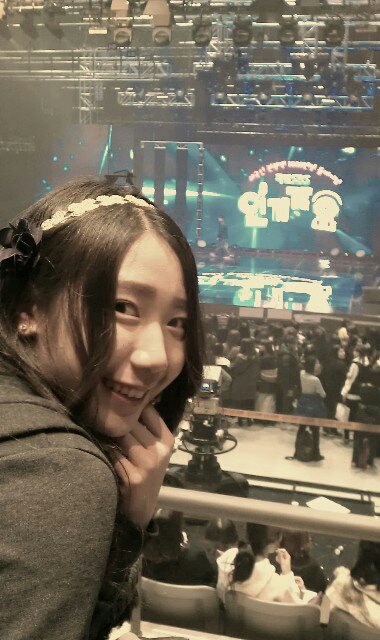 and a picture from my phone. with the stage =3. but when it starts, we gotta keep our jackets and bags under our seats and have a clear pair of hands while there are guards guarding us throughout the whole show just to make sure. sigh. well they should at least allow handphone cameras T______T. and oh, there were mics in front of us just to get our “cheerful” voices hehehe. 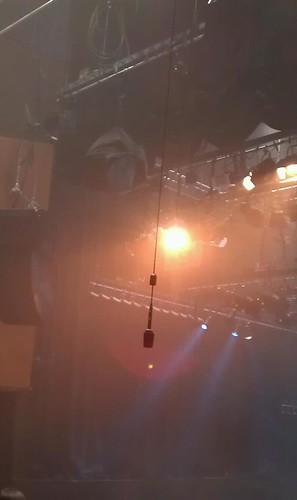 but good news is that the videos are already uploaded on youtube!

so I shall put a few of my favourite here. but just so you know, the line-up for the day was

Park Jung Min (not a fan of him because I thought he was too feminine but he’s good looking anyway)
No Ji Hoon (good singer and good looking too! =3)
Secret (their legs were.. so pretty T_T)
Noel (VERY good vocals)
Kim Jong Kuk
Juniel
Hyuna (SUPER DUPER SEXY. her dance is way beyond her age)
Kim Seong Gyu (I think he’s from Infinite. good song and vocals =D)
Ailee (powerful and breathtaking voice, as usual. ahaha)
CNBlue (MY LOVEEEEEEEE. reason why I applied. to see Jong Hyun my love <3<3.)
Lee Hai (newcomer)
Infinite
Epik High (I almost died when I saw them. I couldn’t breathe. because I’ve been loving Tablo since I was just a kid and totally didn’t expect him to be there. his performance was the best. and it made everything worth it even more.
Kara (awesome choreography. really.)

the performances that I didn’t get to see live but was played on our screen too was..
Shinee (very energetic I was actually hoping to see them live. sigh.)
B1A4
Sistar
Boyfriend (omg so hot the guys D=)
Teen Top
TVXQ

and the hosts were IU (super cute. she’d sing along at the side by herself when there’s a performance. I don’t know why her scandal with Eunhyuk affected so many fans anyway. 3k fans left her fanbase according to my teacher but I still love her no matter what.), Kwanghee (cute as usual and oh isn’t he bright) and Kim Jeong Seok (super hot U_U. and tall too!).

I shall put up a few videos which I think is worth watching starting from the performance I enjoyed the most.

EPIK HIGH! super cute and creative as a whole. it was fun and not boring, at all. you might not see it in the video but there were a lot of moves by Tablo (making hearts) and his dancers doing funny moves. loved it!

CNBLUE! the crazy screams you hear.. well, I took part in it. Jong Hyun is too hot. and he literally sound like an angel. I’m in love.

because Boyfriend have many cute members. <3.

Shinee. really really energetic! this is real KPOP haha. even though I like K-Indie.

wanted to put up Kara’s Video too but it was weirdly recorded. or uploaded. just search for their song Pandora. really really good.

for the rest you can click on any of the videos and check the videos uploaded by the same user =). 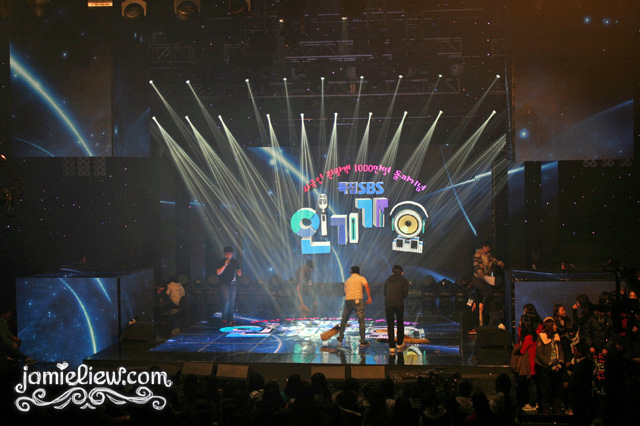 and the end of the show. since it’s the end I just took my camera out. the show is actually a remembrance day for Korea having 10million visitors. it’s mad. I know. they have another show at Gwanghwamun in front of Gyeongbokgung too. but at least there are more performances here. there were only like around 3 performances there. 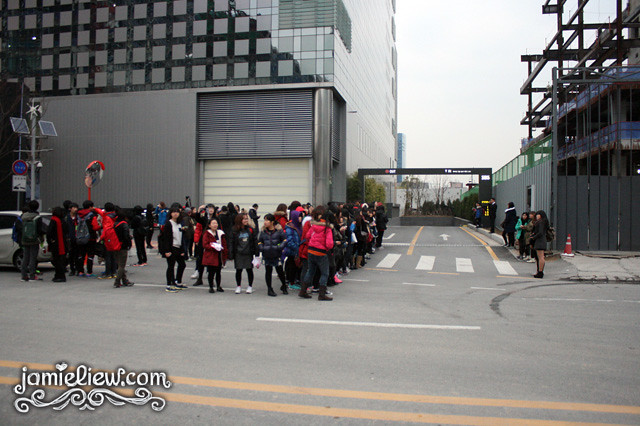 crazy fans waiting for the artist’s cars. it’s stupid because the cars are usually so tinted that they wouldn’t be able to see a thing. but one or two artist wind down the window a little and waved though. still. too silly to wait in my opinion U_U. 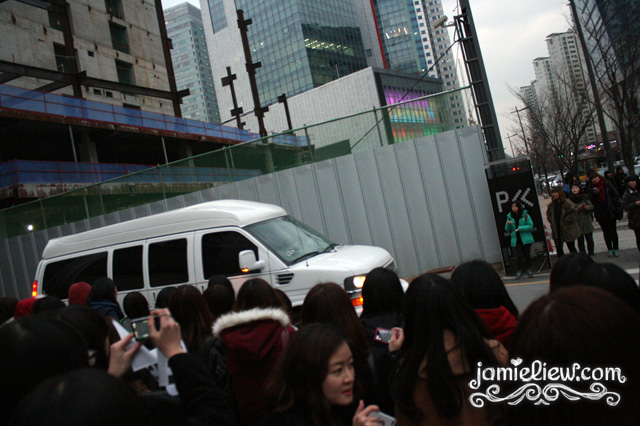 this is how those celebrity cars in Korea look. 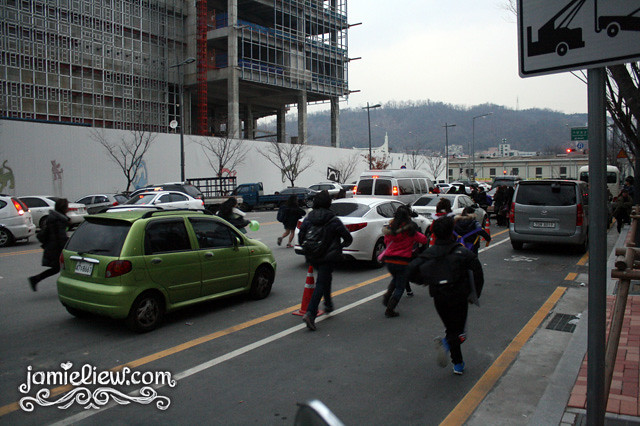 mad fans CHASING after the car. mad mad mad! just like the movies. or dramas.

some of them have been there since 6am just to get a glimpse of their idols. but the thing is, most of them are really young. and educational system here’s really strict on attendance. D=.

overall, I had a lot of fun and it was really an awesome experience! just so happen to be this lucky xD. I am starting to love Kpop now. I used to only like it. but they are such perfectionists you couldn’t not love them U_U.

hi jamie ~~ can i know do u shown steps of how u apply? coz i dunno how to apply since it is in korean~ and can i know how long before i need to apply and get my tickets? sry for long question >.< ~~

hi jamie! i stay in sk global house though but just wondering what bus did you take to the cj entertainment & sbs buidling?

hi jamie! may i have the facebook group link for both (malaysians & foreign residents) ? thank you~~

Maybe I should just call up KTO to ask for details? 😀

So ur type is boyfriend ooo hahha.

Hi jamie. did you go to music bank before?

That was a nice experience. Hoping to watch music shows when I go back even though I don’t know most of them now cause they’re too many. >.< Btw, those that were played on the screen that weren't live, were they pre-recorded already even without the fans in the audience?

After seeing this post, I remember seeing you at the venue too. I saw you busily snapping selcas while we’re still queuing outside the hall! >< I should have known it was you…lol!

Hi, Jamie! I really like your blog. I only discovered it three days ago and been reading it everyday since then. OMG!! You saw Kim Sung Gyu and you only referred to him as ” I think he is from Infinite…” lol! I actually want to go to Korea 20% because of Kim Sunggyu! I want to watch a live music show, too. I’ve read SOOO many blogs and they say it’s so difficult to enter. Congratulations to you for being able to enter. I hope I make it, too. M Countdown, Inkigayo, Music Core…just one show, I’ll be super happy! It’s seems that you are really lucky and enjoying your stay in Korea. <3 I hope to see Sunggyu,too. Well, Ill be seeing SNSD,Infinite,EXO,Ukiss this January here in the PH as they will have a concert. But watching them live in Korea is still better.. <3

Hi Jamie, I found your blog recently, and I’m loving your posts about South Korea. My friend and I want to visit for the culture and food, and also were thinking of visiting some of the clubs you mentioned. We also wanted to see if we could get tickets for a 2PM concert, if they have one in South Korea in 2014!! Do you know how a foreigner (from the US) might be able to purchase tickets? What’s the process? Do we buy them online? Do the shows sell out really quickly?

Sorry for the long string of questions. I’m really new at this, and thought I would ask. Seems like you have a lot of information! 🙂

HELLLOOO , just wanna ask one very simple question ,i think i will try to get those tickets from the official website ..=X if im lucky enough ..anyway is it hard to get in if you have the tickets ? what im afraid of is that i cant communicate with them cause i know music core is like so damn strict but now they wouldnt allow foreigners anymore .. so what bout inkigayo?

You look really tall unni.Are korean girls tall? Is 1m65-67 considered short there? Are there many tall girls?