super 5 months late post. because I just retrieved the pictures from Leo. most of the pictures below were taken by Leo ^^. 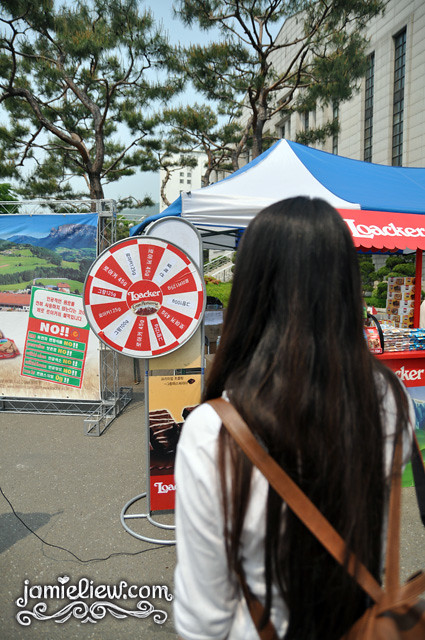 after class I went to meet up with Leo. it was the 2nd day of Akaraka (of 3 days) and on the first day you can see students sitting on both sides of the road with little box tables on nice cozy mats (even on grass) with bottles of alcohol (soju, beer..) and chicken. but I guess I love the 2nd day the most. because they have FREE GIFTS!! the one above is a Loacker booth. basically just wait in the line and you’d get a free bar of Loacker. which I absolutely love but its absolutely expensive U_U. 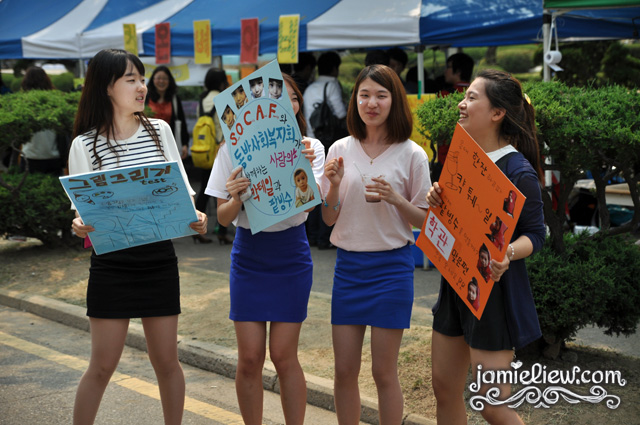 students all around promoting their booths!

and my favourite……… stalking hot guys. there’s 1 more picture of that senior I stalk in the library a lot during level 3 but my pendrive was full, next time! 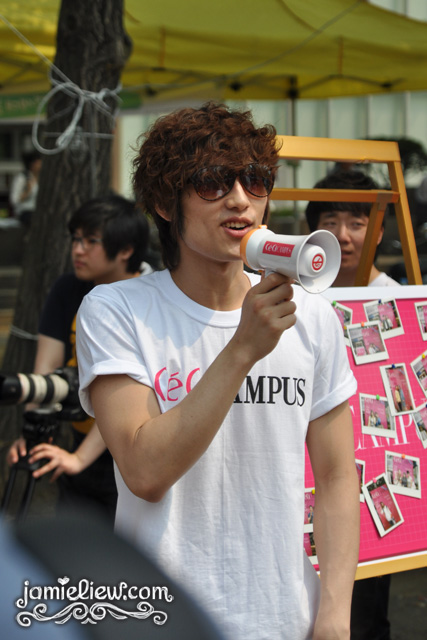 here’s a staff from Ceci. a magazine which is pretty famous in universities here. and I know, HE’S SO CUTE! *faints* 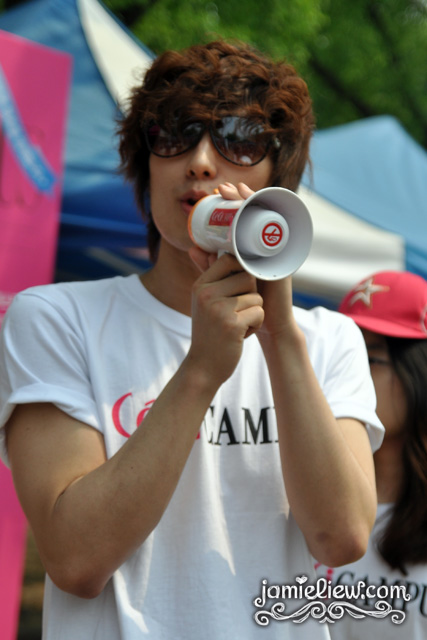 reminds me of Jung Il Woo if you know who that is. I played some billards game where I have to throw a magnet thingy from afar and hit a small 50cents dot on the side while the board is spinning. I was never lucky but on I hit RIGHT ON IT! won myself some make up primer (which I don’t use le sigh) which costs 30,000won (RM90)! 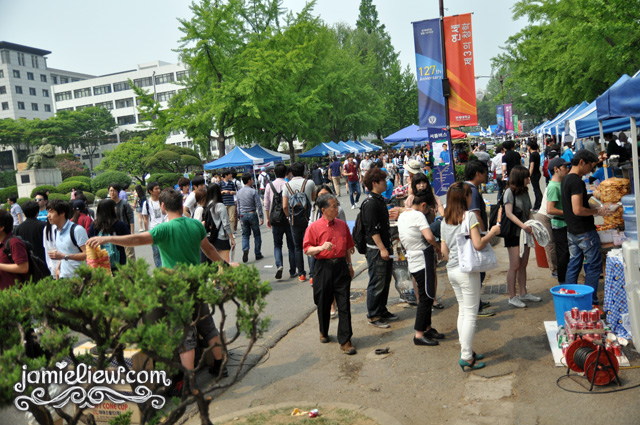 those amount of booths. it’s not only for Yonsei Students, so if you so happen to be in Korea during the 3 days Akaraka period (only the 1st two days are open to outsiders) then make sure to drop by! 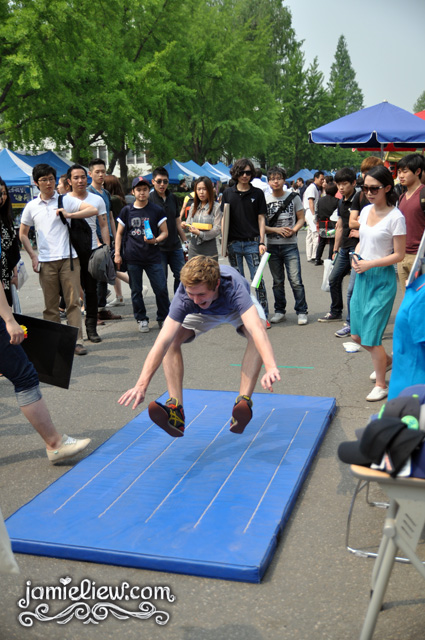 the further you jump, the better your prize. the most expensive prize was a pair of branded shoes!! if not then caps. but there’s a small fee to join it. 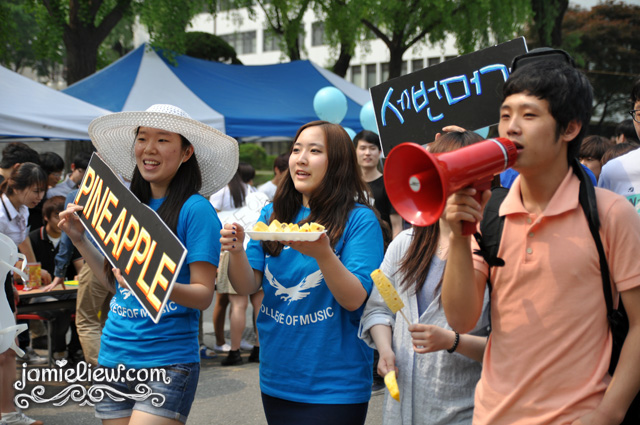 pineapples for 1,000won!  each department have to come out with something! 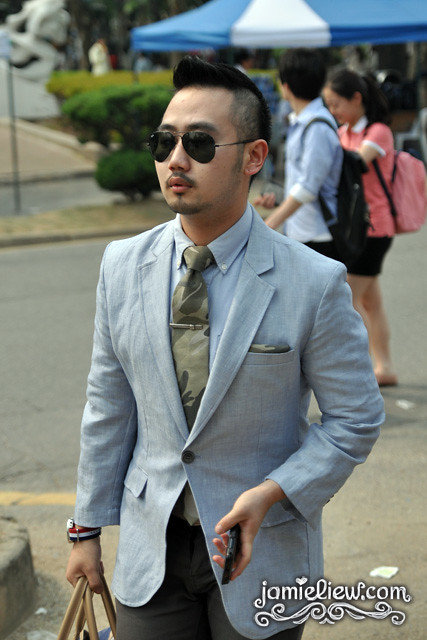 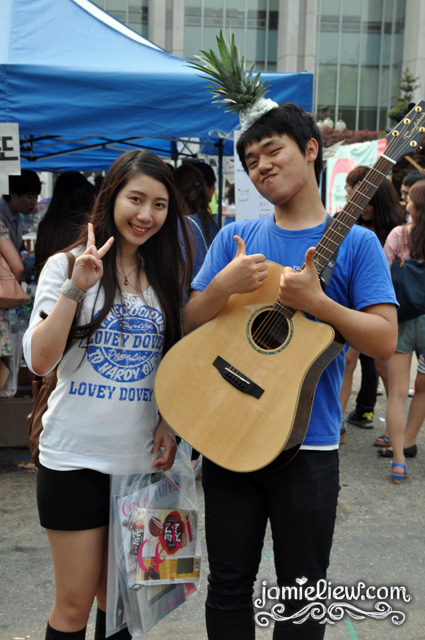 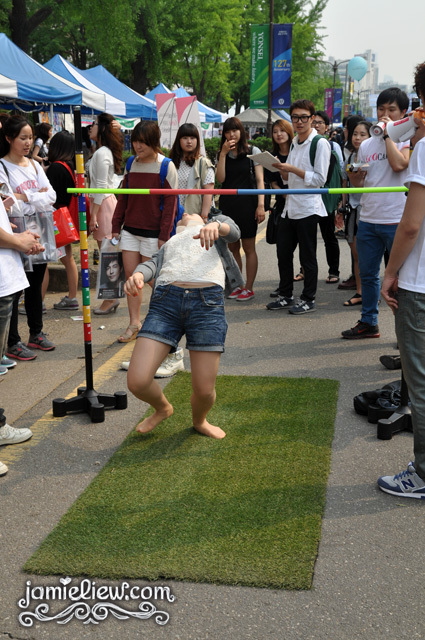 these people are crazily good in this. one of the many things that I cannot do. =/. 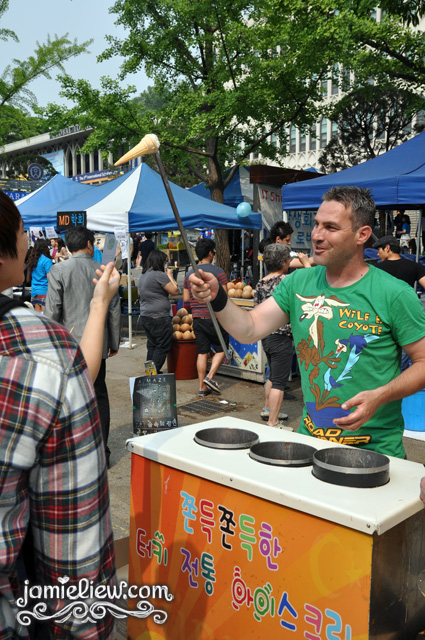 love Turkish ice creams and their vendors! just so fun =3. 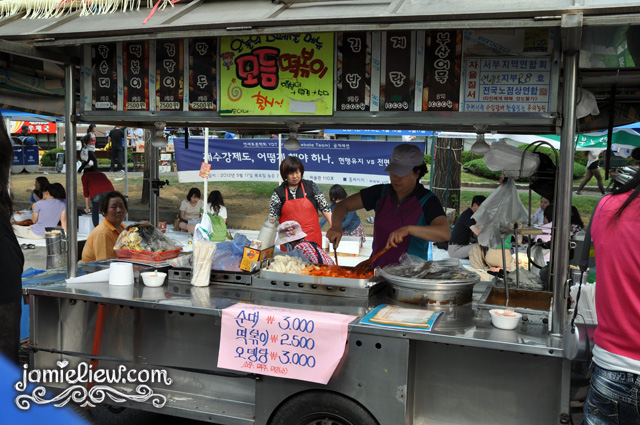 there are ajumma’s selling the famous street food as well =D. 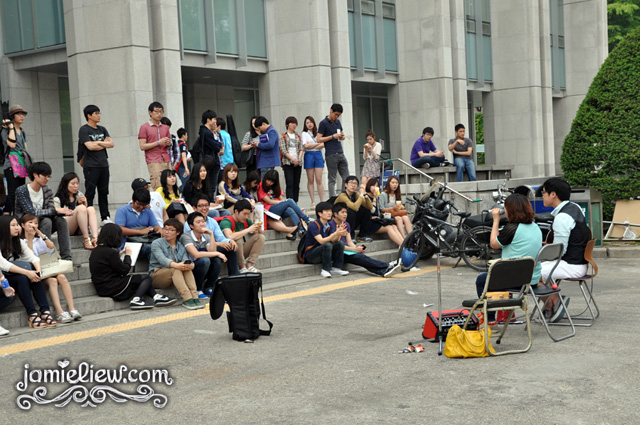 and indie bands good enough to be put on stage. really. 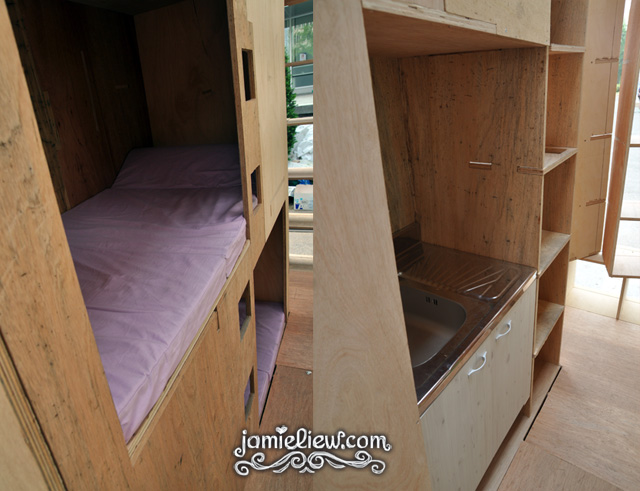 some architecture work from some other school. pretty cool I must say. 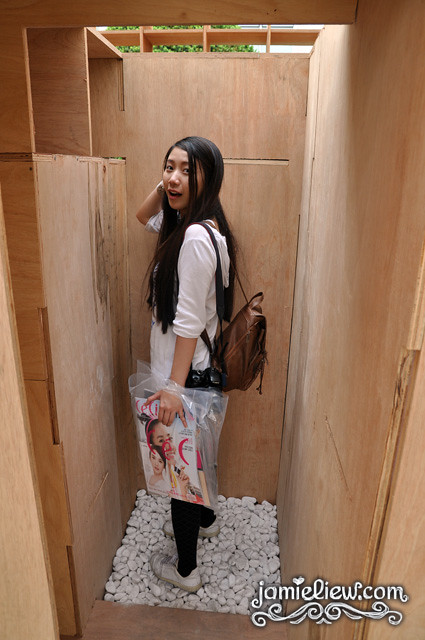 believe it or not but this is supposed to be the shower area! 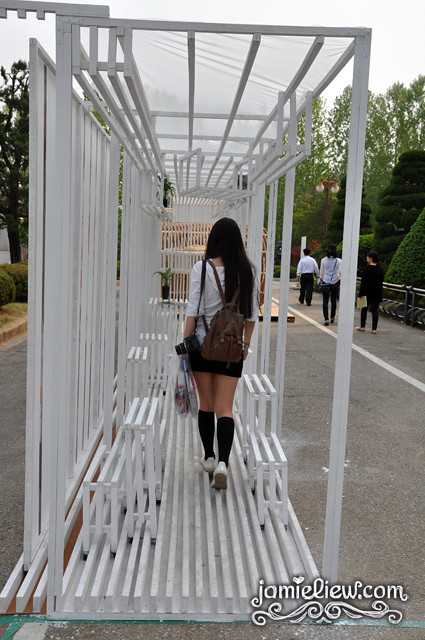 another work from another school. VERY FLIMSY D=. 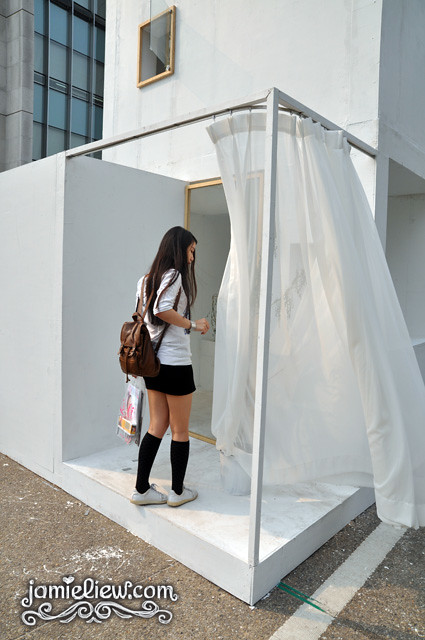 and another. even flimsier. 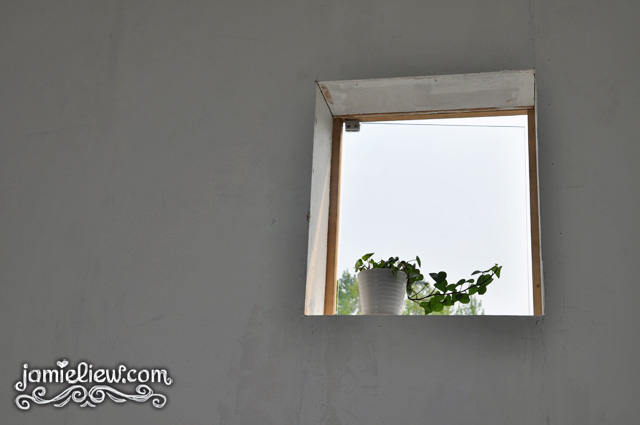 but at least there’s a nice window… with a pot of plant on the 2nd floor. yes that building has a 2nd floor and I shamelessly climbed up there despite being heavy. and I could destruct the whole thing easily. 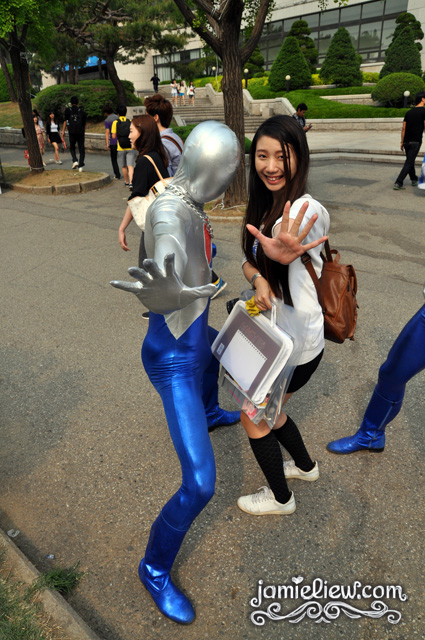 no idea what pose this is. just followed him haha. 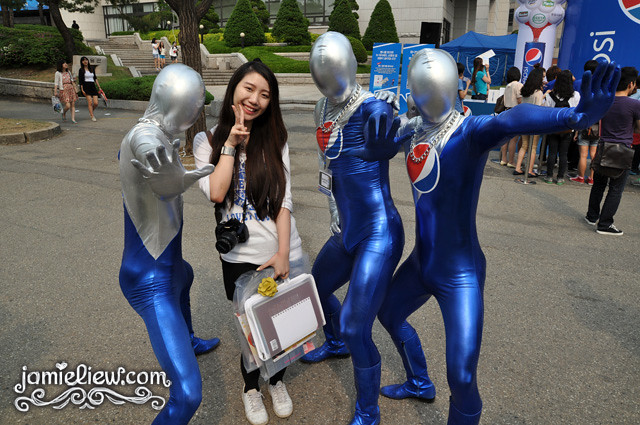 more pepsi men. it’s damn weird because they are not fat. =P.

lol to those pepsi guy. I wonder how they breath??

how does pepsi man see? o.O
The pose was… weird. XD

Hey Jamie, my dream is to study at Korea! So I guess my first step is to learn Korean, I was planning to take korean classes at icls. But can I know which level do I need to reach before I can study in Korea? =D