yet another awesome contest for all of you (and it doesn’t matter which country you come from). do you like the Olympic Games? or… LONDON..?

since I was young I’ve always wanted to go to London. I have a thing for British accents and Big Ben. and after my friend was proposed in The Eye of London I got even more interested in it. so I am going to take my chances too. and did you know, the Olympics was in London 64 years ago? I’ve always been a fan of the gymnastic section and not to mention, the BADMINTON ones. I’ve never missed the Olympic openings and endings on TV because I think everyone should at least watch them to be part of history and you could tell your greatgrandsons about how awesome and unique each and every Olympic is. so aren’t you excited?!

firstly, check out Jamie’s video. I mean, Jamie Oliver =P. Jamie is such an awesome name only awesome people can have except most awesome people are usually men. hahah. 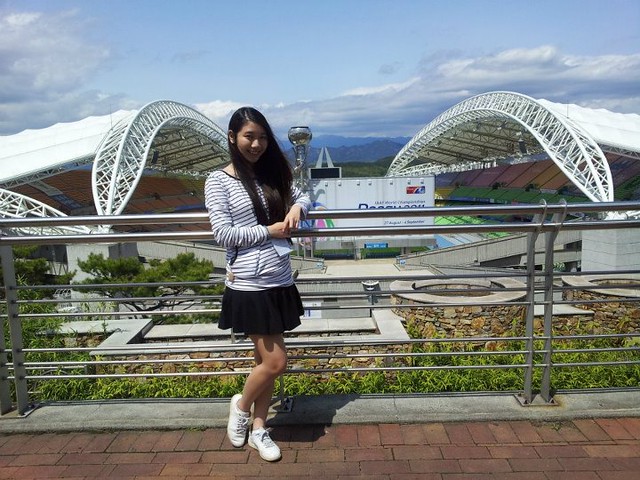 and here’s me with the Olympic stadium in Daegu, South Korea!

so, how can you grab your chance to go to the Olympic Games in London?

do you like blogging? taking pictures? making videos? reporting whats happening around on the social media? at least one of them, and this is for you. =D.

okay so this is how it is, they are looking for a star, a blogger to blog and report back from London and you will be mentored by CELEBRITY JUDGES and of course, you get to your video blog promoted globally thoughout 19 countries!

as long as you’re confident in front of the camera, have a sense of humour, creative, have passion, a social butterfly and have the ability to tell a story well both written and spoken.

the celebrity judges will pick out the best ones to win the grand prize : a fully paid trip to London during the Olympic games. talking about it is making me excited!! I can’t wait to have mine sent in already. which means I will need to do it within 24 hours!

of course, I wish everyone good luck too =)!

It‘s nice to visit your blog.
I thought you were a Chinese when I saw your photo.

i have forget why i use this name.perhaps i like Jamie ‘s Chinese translation
A gril? of course not

Hi there!
I’m attending the competition with a clip that you can find here –> http://samsungglobalblogger.it.msn.com/videos/3547

That’s the story of my sports dependance! I hope you enjoy the video and if I win a spot at the Olympics as a blogger I hope you will follow my stories!

By the way, what a great web-place…even if I don’t understand lots of comments! XD Totally fav anyway.
Cheers!
Stef.