my eyes almost popped out when I saw a KOPITIAM in Edae. my friend told me that there is a Kopitiam nearby but I didn’t thought that the name itself was Kopitiam haha. it’s specialty is Kaya Toast. and apparently, from Singapore. 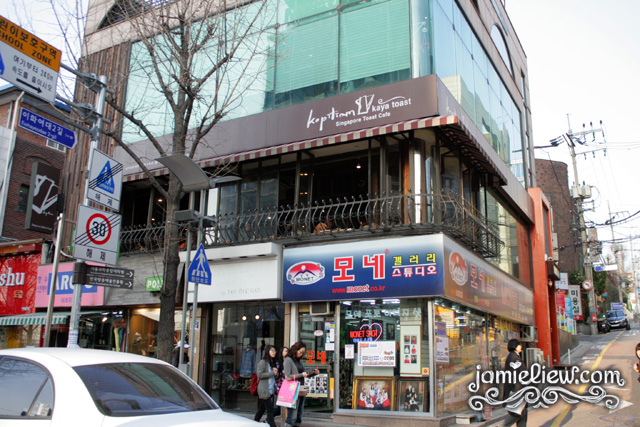 well Singapore and Malaysia is 99.99% similar in food so.. =D. it’s located right at the Edae street it was a wonder how I have never noticed it. 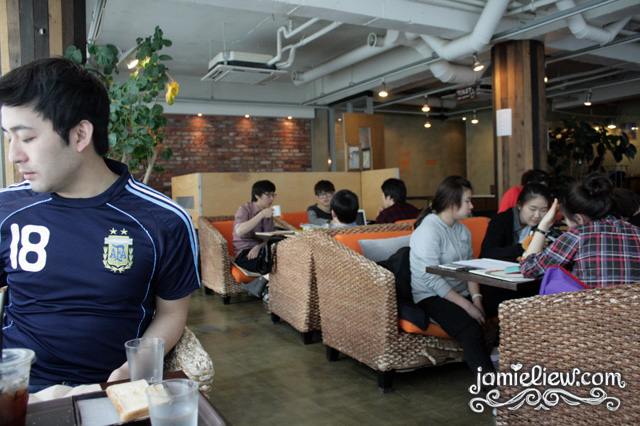 the interior. it’s very nice compared to any coffee shops in Malaysia really. not so much of a Kopitiam if you ask me haha.

pause. after like 30miutes after the picture above was taken. I bet you can see that guy in specs above looking at my camera. HE CAME TO ASK ME IF HE COULD CHECK MY CAMERA. like wth. people here damn perasan right. I mean, it’s not like he’s some superstar or trainee or anything pfft. I wanted to take a picture of the interior and he HAD to be there. I just showed him the last picture I took and he was telling his friends “oh she was just taking a picture of the place” in Korean. he wasn’t even embarrassed. my god. =______=. and later on I started to notice them keep looking at me. I don’t think it’s their way to tackle girls since I had a guy friend with me whom might be my BF and would get really angry bla bla bla. haha. 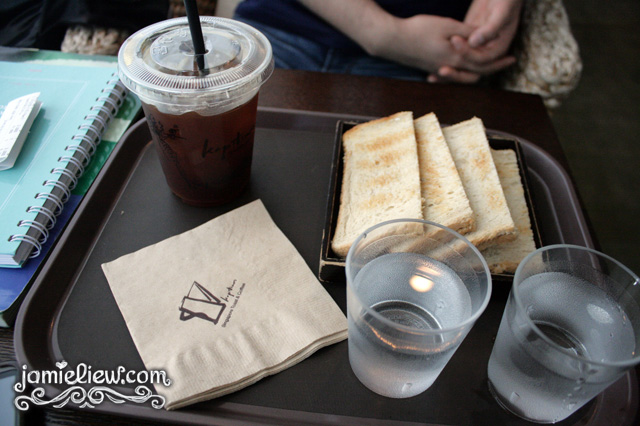 anyway, back to the Kaya toast. there’s only like…… 3 Singaporean food available. I was pretty disappointed. all the drinks are similar to the ones at any other cafes. =________=. 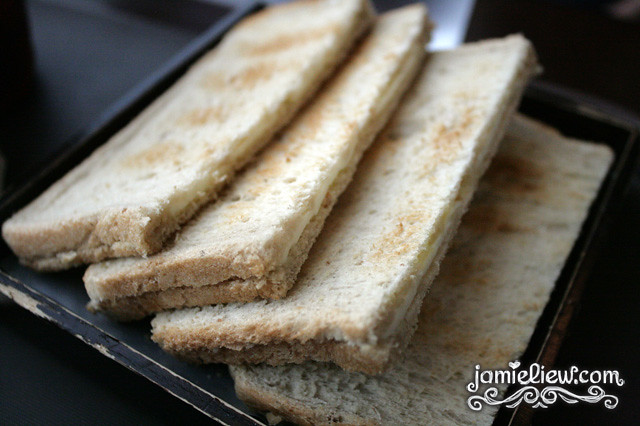 and as you can see, this is like the thinnest piece of bread I’ve ever eaten. and their Kaya is so….. thin I couldn’t taste anything. I mean, Kaya is cheap and easy to make, why so stingy?! PFFT. overall it doesn’t taste that bad but for 3,000won, I still think the Kaya is too thin. I could barely taste the Kaya. back in Malaysia Kaya tosts have a cm thick of kaya + butter. here, it’s like 0.2mm butter and 0,01mm kaya. but this is as close to home, so I can’t complain much. =(. 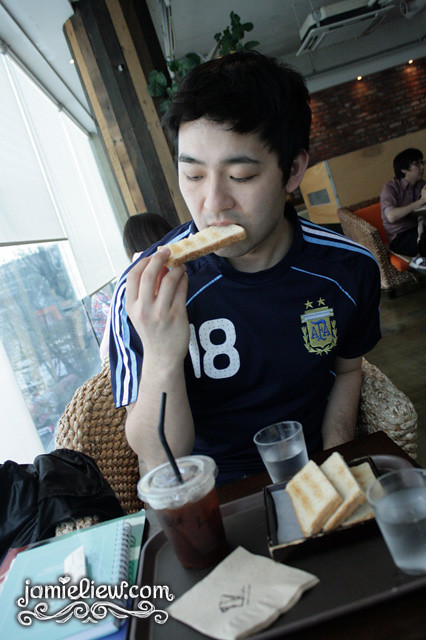 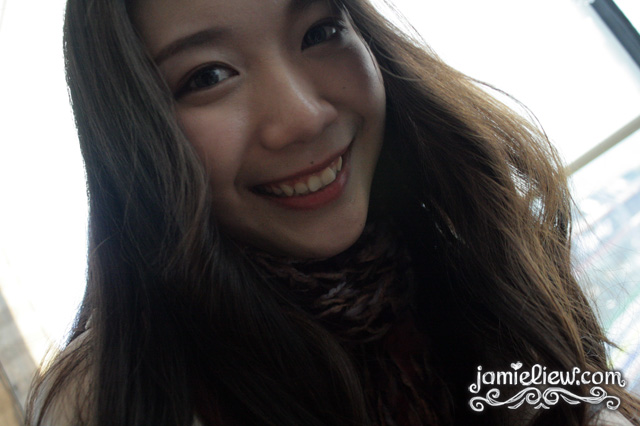 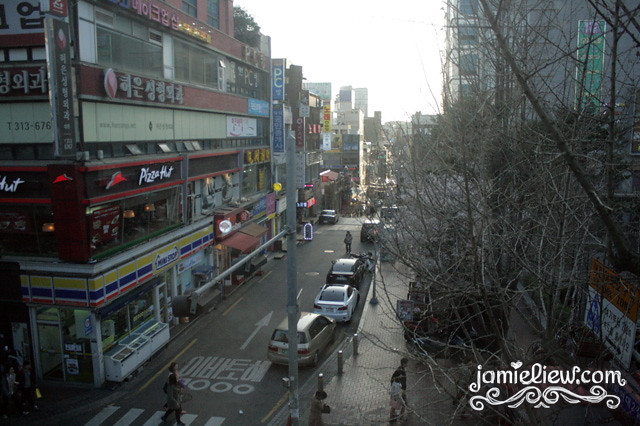 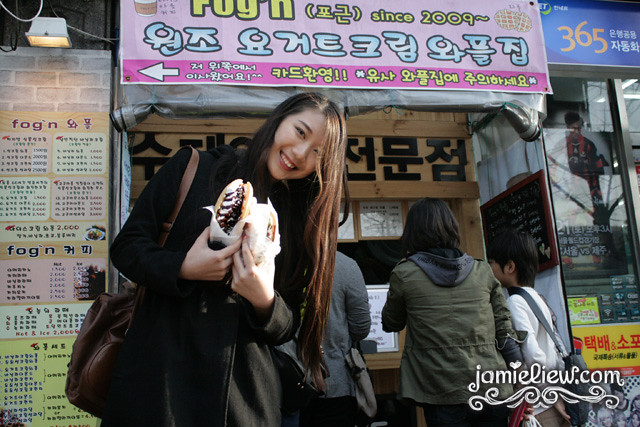 then we headed to eat the super fattening waffle. can you see the amount of cream? it’s a little too much, I just ate half =(. first time I actually wasted food as far as I can remember. 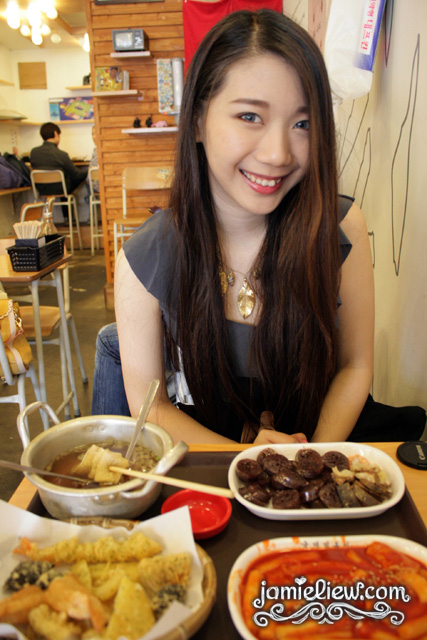 also, I met up with a reader from the Philippines! and I brought him round the Sinchon and Edae area and also to my favourite ddeokbokki shop at Sinchon =D. 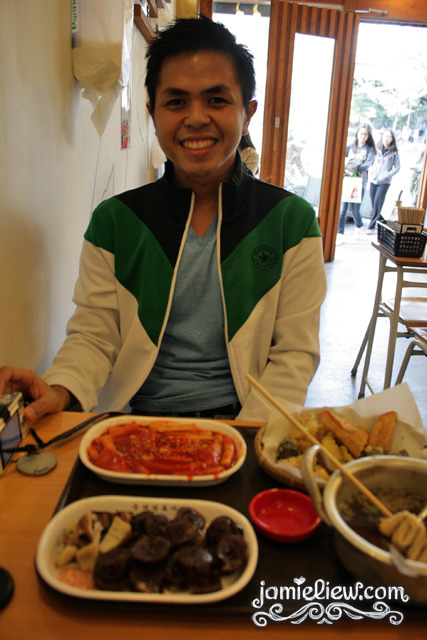 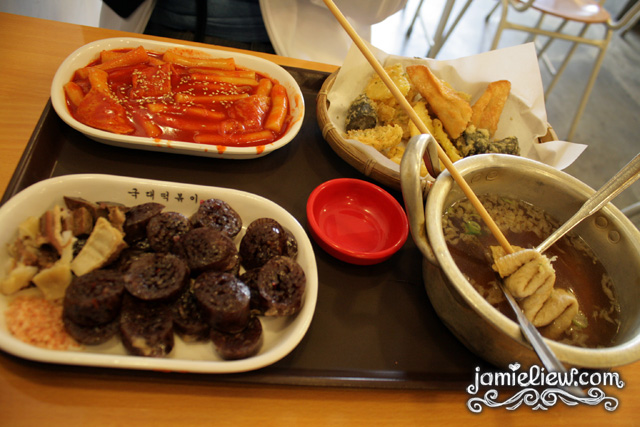 he liked the Sundae the most. honestly speaking the first time when I tried Sundae I hated it. but now, I’m sorta addicted to it. and the Ddeokbokki here are friggin’ spicy. =D. not a fan of twiggim but the ones here are goooood. also because this is the only place I’ve had twiggim but normally I hate fried food. haha. 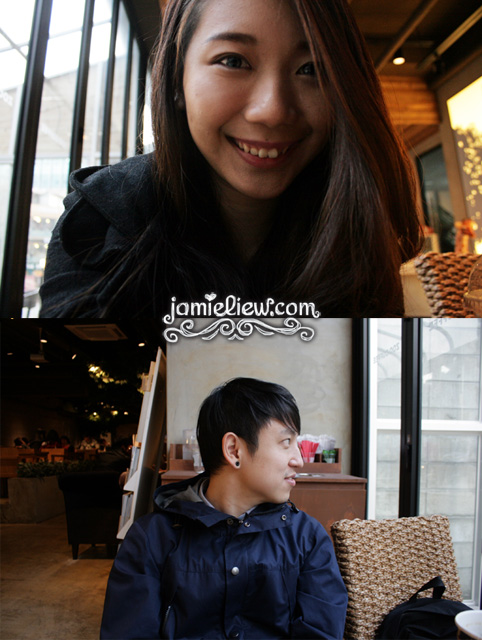 and we went to the Zoo. 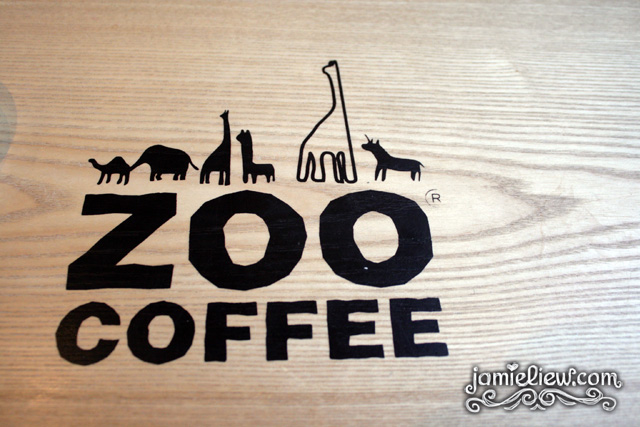 a Zoo Cafe with no real animals. haha forgot to take pictures of our drinks but his Americano was in a leopard print cup. it’s pretty cool. saw a zebra print cup as well! as for mine, I am allergic to coffee so I had tomato juice. to my surprise, their tomato juice are literally fresh blended tomatoes. but the thing is, a quarter of the drink was the chunks of tomato skin haha. 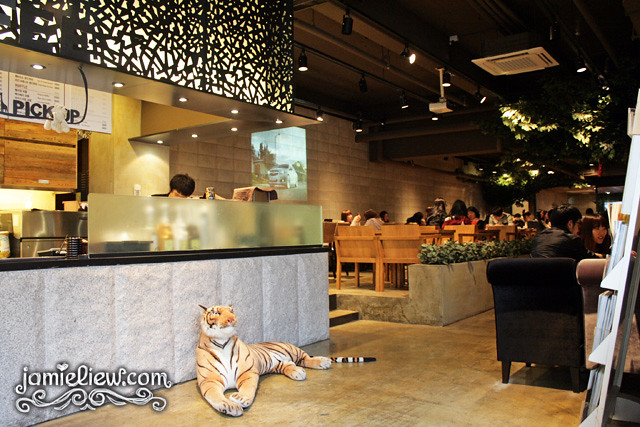 no real animals but at least it does look very tropical and there are animal soft toys everywhere =D. 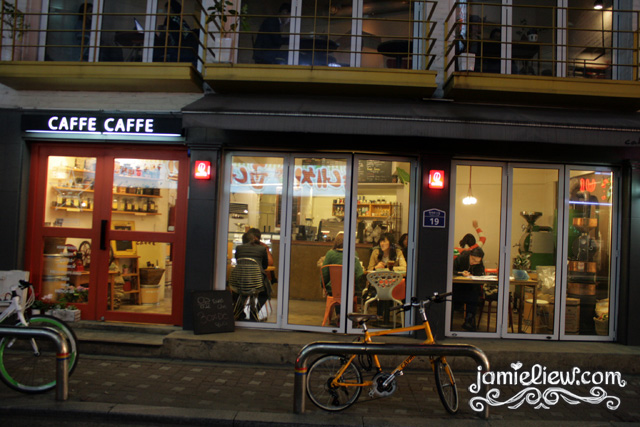 cafe’s in Seoul are really awesome. just that they cost 50% more of Starbucks back in Malaysia. and I thought Starbucks was too expensive for me too. le sigh. I shall just never study in a cafe. =S. unless I’m going to sit there for hours. or when I am feeling lonely and want to get hit on I can try to get lucky (if the guy is a stalker then maybe not..). since I heard guys here approach single girls (or girls in a pair) randomly in cafes and restaurants; even the streets. =D.

just came back from taking pictures around my school. Sakura trees are getting uglier already =(. the green leaves are growing out. but I managed to capture some nice shots. now I just gotta wait for my friend to transfer some of the awesome pictures taken with his awesome lens. =D.

Hi Jamie, hope ur doing well over there while I’m enjoying my nasi lemak… hihihi… just joking! Well anyway, if for Muslim where do u think it’ll be appropriate for us to cari makan other than Itaewon?

Yeah… I totally understand. Well, I guess it calls for a diet for me when I’m there LOL. A good way to lose weight… well, at least for me la.. haha… but thanx for the info tho =)

I’m a little confused by the term “kaya” since in Zulu (I had to learn slight bits to understand the culture in my arts class) it means home.

Ohh, i need to know the direction for the Ddeokbokki shop at Sinchon, everything looks so yummy! =)

Wow! That guy must really be paranoid to check your camera. It’s like, wow! does he think you are his stalker or something. hahahaha! I’m just surprised. Did you use a flash that’s why he noticed it? Gah! Koreans are famous for their selcas so why should he be conscious. Also, he should know that you are a foreigner, and foreigners take a lot of pictures there.

Haha, you’re an eating machine! 🙂 Had a request… any places in the Sinchon area that you recommend for convenient single/alone eats?

Dik, u lost weight leh. By the way, you can probably think of having your own kaya and toast next time. Cook it and sell it, sure can get money from just selling it for breakfast. Exclude the coffee, heh heh!! Just kidding…

Sorry that I needa seek your advice abt Seoul, out of the above topic. My frd wanna go see some professional headphone, but these days at Seoul we can only find many phone cases shop and some playful candy colour headphone, none digital product shop we can find.

Can you advice where i can see those shop? As I am leaving tmr, I may take a quick look tmr morning if you can tell me?

Thank you so much!

I might be coming to Seoul and Jeju soon! Watch out! XD

Seriously? Eish… ya la kan. I’m think when I’m there all I can eat is seafood, bread, sweets… as long as it’s nothing to do with any meat in it I think I’ll be fine ^_^ .

Hey I’m Singaporean and I’m coming to Yonsei too for the Summer semester! Lets meet! Haha

Just curious… do you intend to get a Korean boyfriend? And don’t say you are fat you look skinny please… what is your weight?