the good thing about not being shy in class is…….. your chance of experiencing something awesome is larger.

so during level 3 (and every alternate term or year I heard.) you get to visit a faraway place for FREEEEEEEEE. yes, you read it right. FREEEEEEEE. if you hadn’t already know, I shall inform you that travelling anywhere out of the Gyeonggi area would cost quite a lot. especially down South. Cheongdo is somewhere near Busan and Daegu and hence it’ll really cost a lot if we were to come here by ourselves.

but the bad thing is, every class, only 2 student get to go. so if you raise your hands fast enough, you’d get your chance! =D. but when people hear about “bull fighting” they’re usually not interested. but seriously, bull fighting isn’t the only reason why you should visit.

my Cheongdo trip will be divided into a few posts : Bull Fighting (this one), Wine Tunnel (I wanna get proposed here U_U! the most romantic place I’ve been in Korea so far.), Pension Stay (what you’ve seen in reality shows =D) and bits from the next day in Daegu. just too many pictures to fit it all in 1 post! 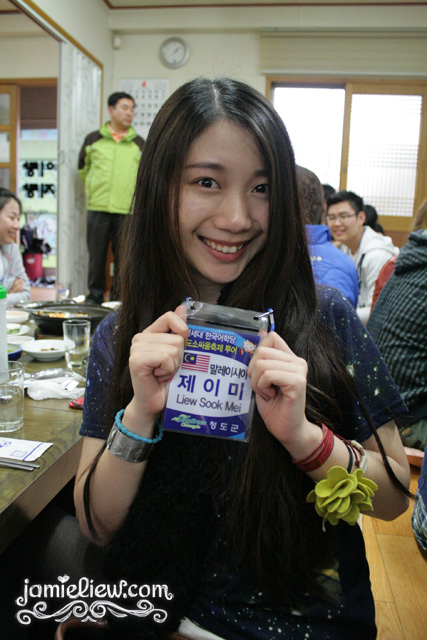 and they had out names printed perfectly on a pretty tag with our country and all. U_U. I was so surprised to see my country’s flag haha. it’s like “OH LONG TIME NO SEE!!!” 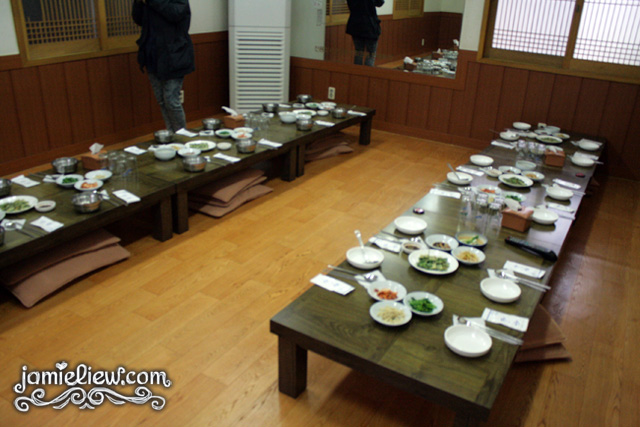 we stopped by a cozy restaurant for some Sundubu Jjigae for lunch. gosh the ondol(floor heating system) is some good stuff when it’s freezing outside. especially when it rains. 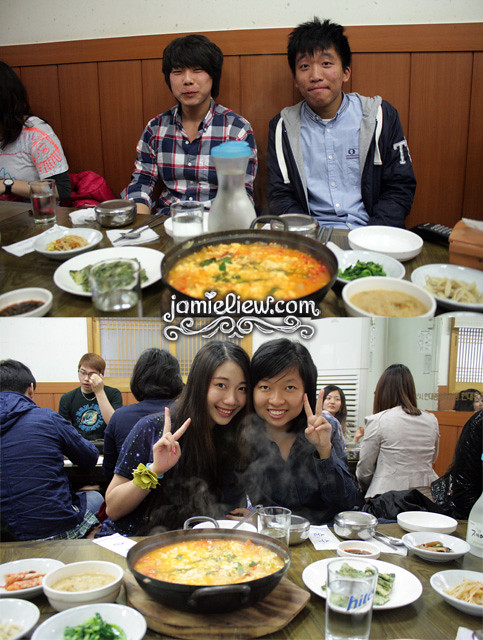 so like I said, each class only can have 2 students. (awesome stuff is that they even bought us insurance!) and the first two friends I made are probably the 2 Chinese guys as you can see from the picture. one from China and one from Hong Kong. funny how I tried speaking in Mandarin to the HK guy and then when we found out that we both can speak Cantonese it’s like……. 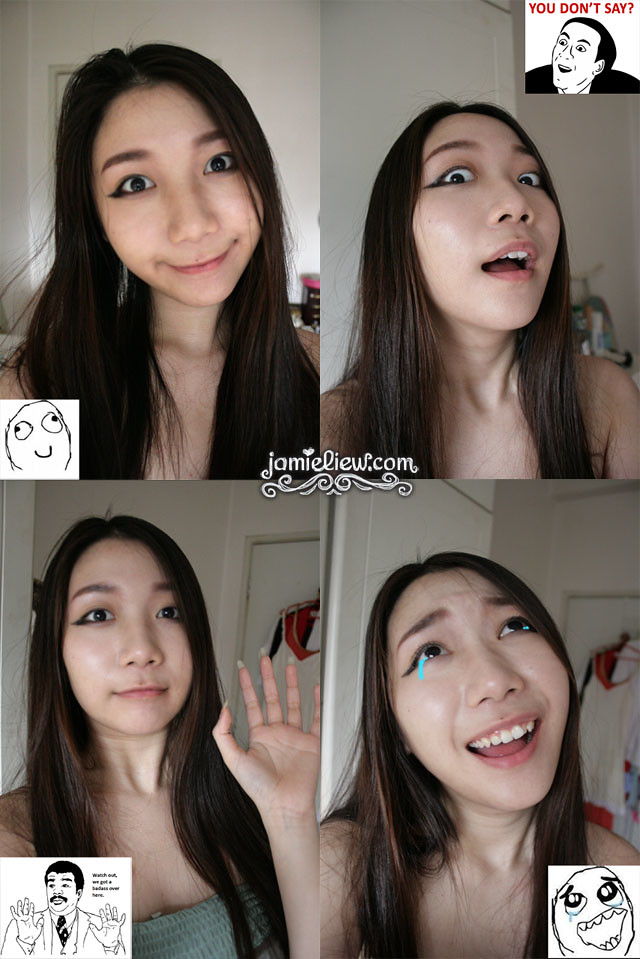 1st : oh hi!
2nd : OH YOU CAN SPEAK CANTONESE?
3rd : shall surrender to Mandarin now.
4th : it has been weeks since we last spoke Cantonese! 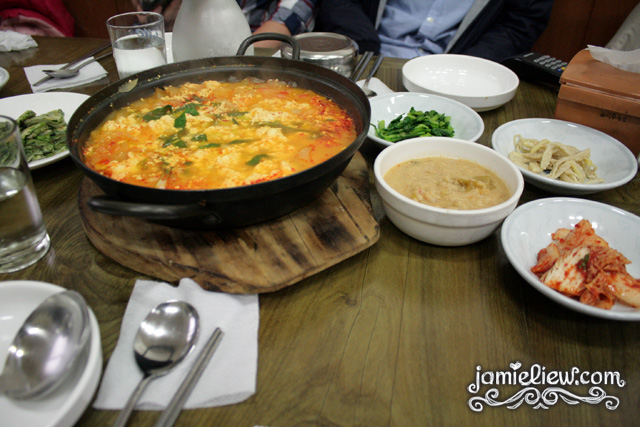 our Sundubu Jjigae! the ones here aren’t at all spicy. so I kind of preferred the ones in Seoul. to be honest, the best Sundubu I had was still the ones from Daorae (Sri Hartamas? forgot. near Soul-ed out. not a PJ person ahah) U_U. 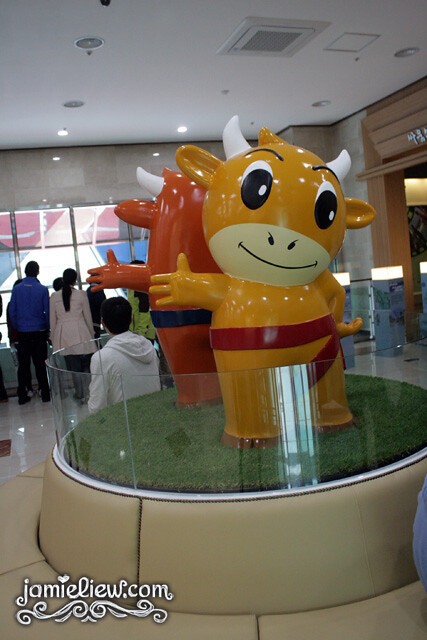 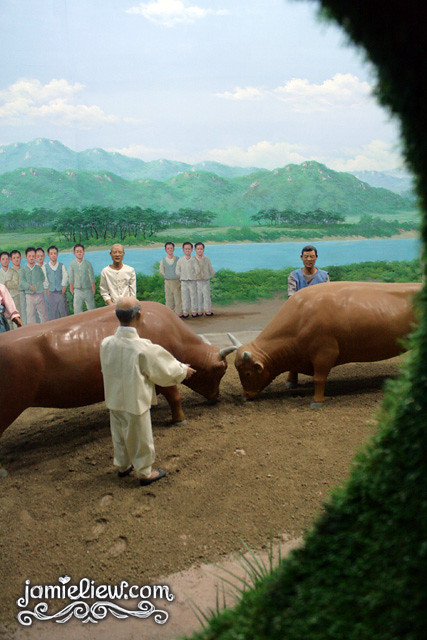 like how they included details like the footsteps and all. this is just to show the history of Bull Fighting. it has been in Korea for a VERY LONG time. 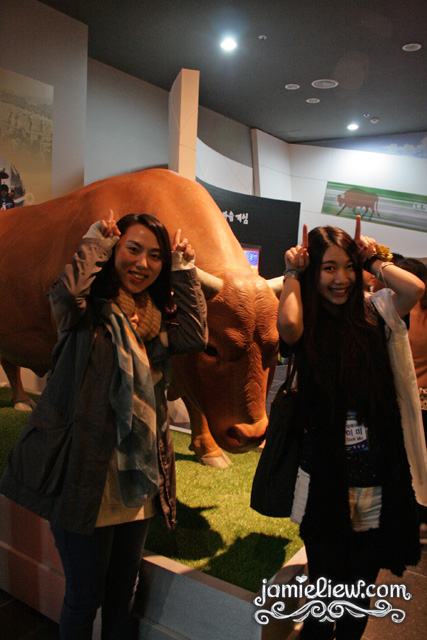 our pretty teacher. I hate to say this but most teachers in Malaysia (other than Suet Li!) are normally not as young and fun, but of course they are good in their own way. while most teachers here are really pretty. LITERALLY REALLY PRETTY. and 90% of them are very very enthusiastic in teaching! 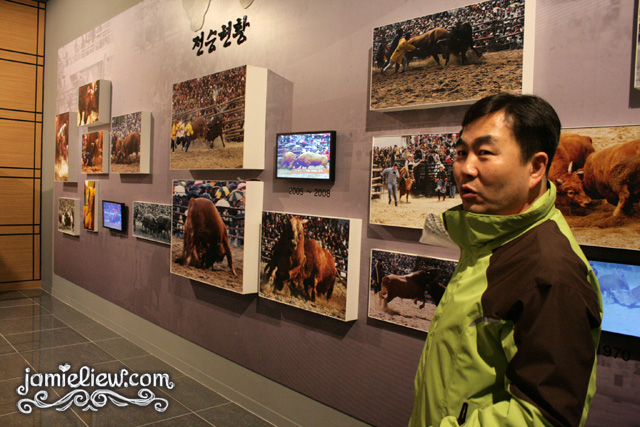 our tour guide for the day! actually, 2 days. he is from Cheongdo so he speaks with a heavy Saturi (it means accent). it was so funny when some students even told him that he has Saturi and he stared at them hahahahaha. 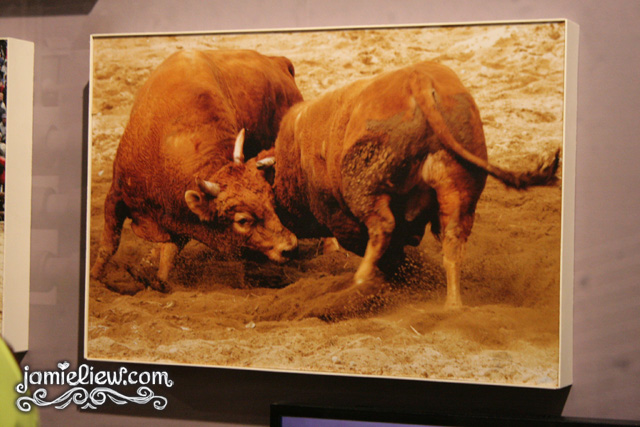 some awesome picture there. so I told myself that I must take a similar picture with my not as professional camera! 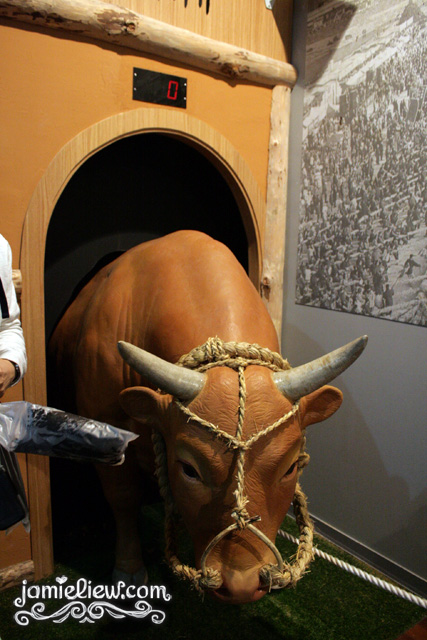 museums here come with a lot of games. =D. and this one is to see how strong you are. 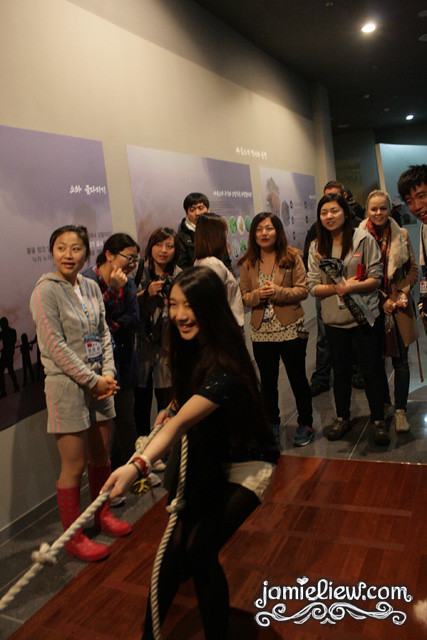 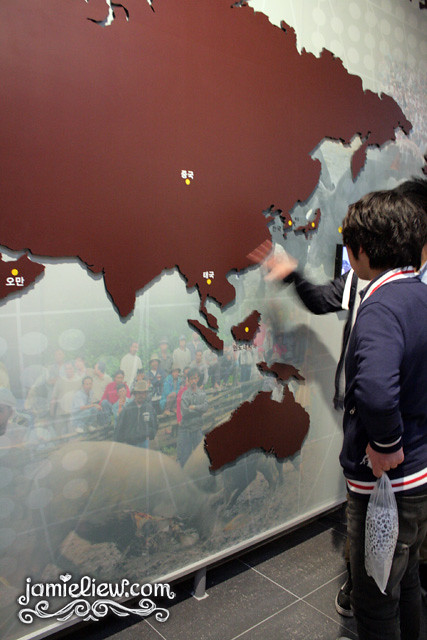 Wai Kit was telling me how weird it is that Korea seems like the only country with bull fighting other than Spain. but based on the picture above, it’s EVERYWHERE! just not in Malaysia. haha. 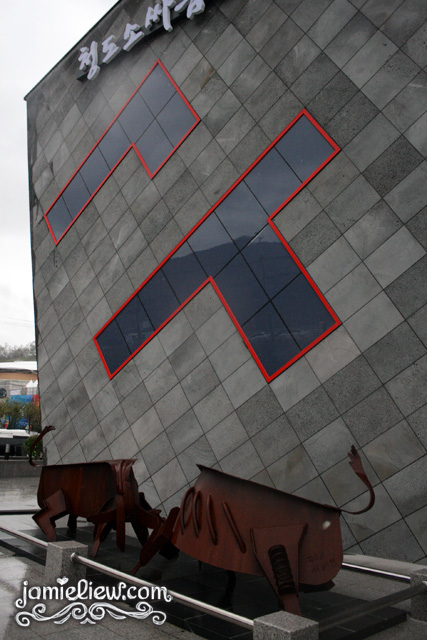 so basically, Cheongdo is a place filled with Bulls. made from anything. 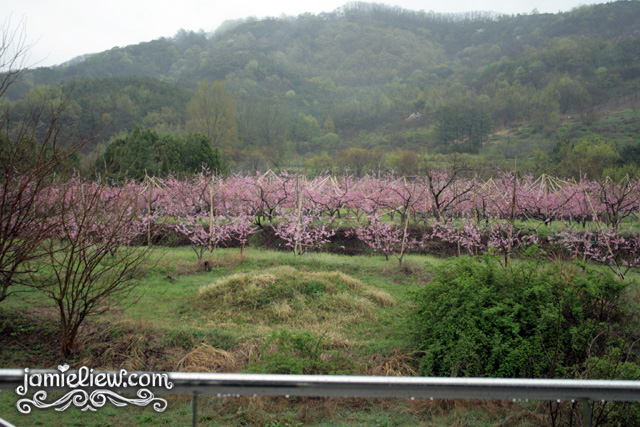 and CHERRY BLOSSOMS!! the Cherry Blossoms here are pink! 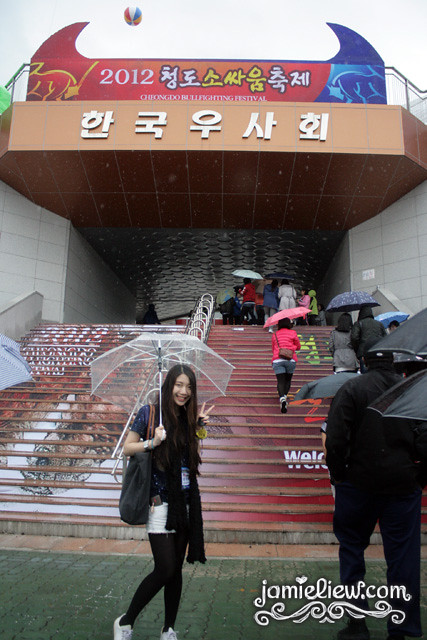 the Bull Fighting Festival goes on for a few weeks in the month of April =D.

was really surprised to see a lot of white people here too! I mean, this very far compared to Seoul and isn’t exactly a very famous spot. but it’s really worth to come here. SERIOUSLY! I’d go back if I’m given the time and money hahaha. and that behind me is the Bull Fighting Stadium. 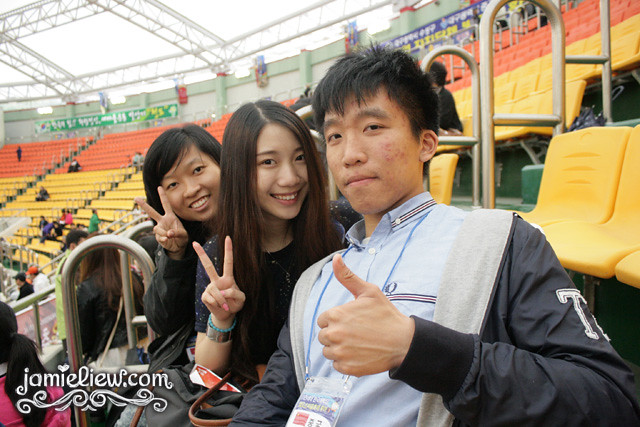 while waiting for the show to begin. 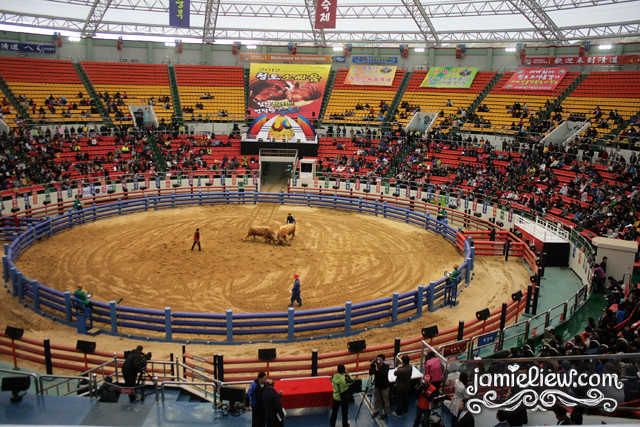 and after a short while. it started!

initially everybody thought it’d be quite boring to just see cows fight. but when they move around abit, it’s really really exciting. I do not know how to describe it in words but it’s like….. watching football. haha. you decide on the cow you want to win and make a bet with your friends and it will eventually get super exciting. 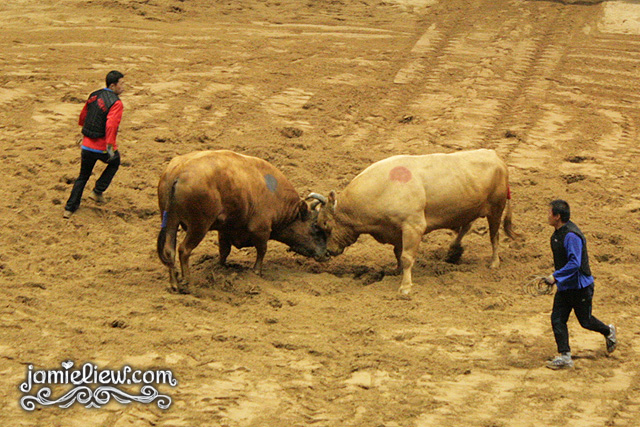 my attempt on taking a picture like the one I saw in the museum. CLOSE ENOUGH! 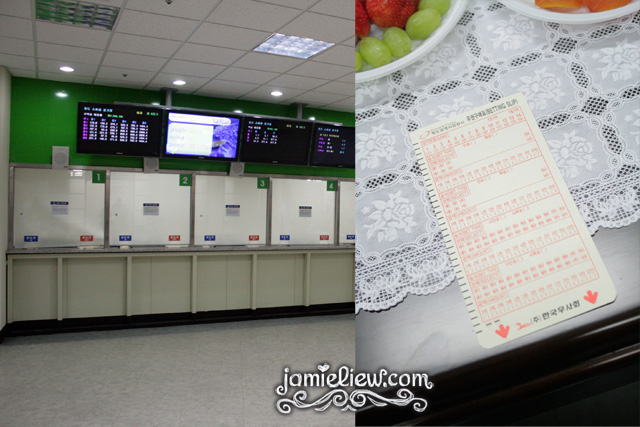 if you find betting with your friends for a candy is too childish for you, you can always go to the REAL betting counter =P. it’s similar to horse racing really! 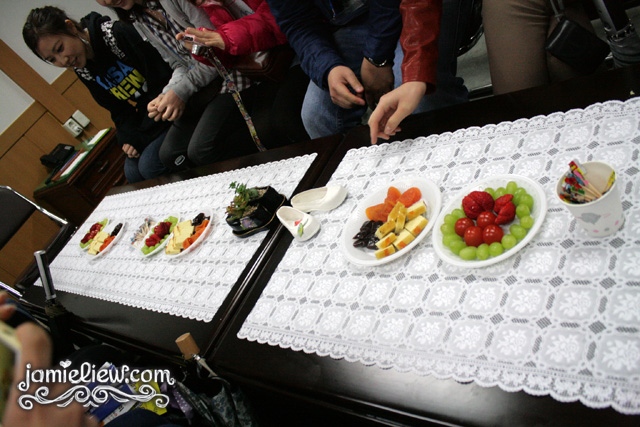 we were then escorted to see the president of Cheongdo!!! if you come to Korea, one of the things you must try are the Strawberries. they are HUGE and usually VERY SWEET. 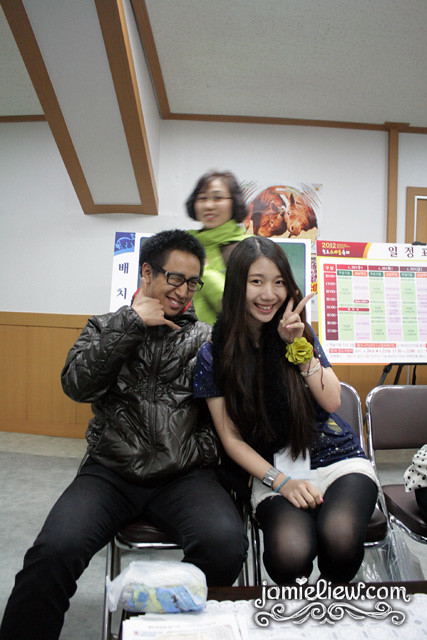 I am not sure if it’s Brazilians (born Korean) or it’s just Andre. he’s just so fun. haha. 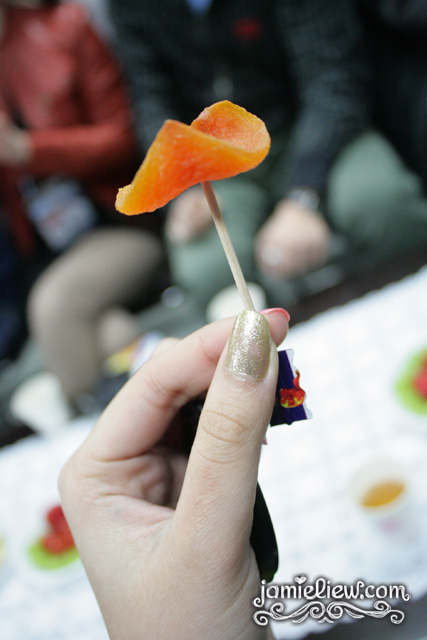 did I mention Cheongdo is where most of Korea’s Persimmons came from? very very famous for it. 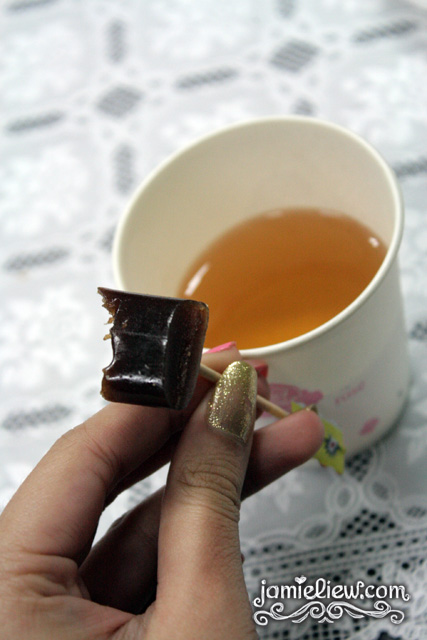 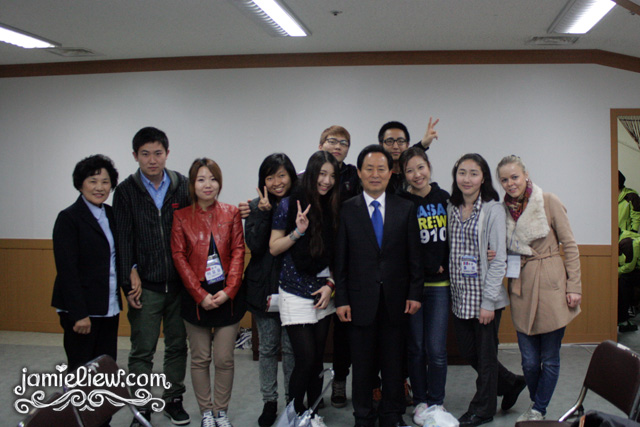 some of us with the President of Cheongdo and his wife! and their daughter is an enthusiastic teacher at our University, hence they got tied for this trip. ah. really an experience that couldn’t be bought. 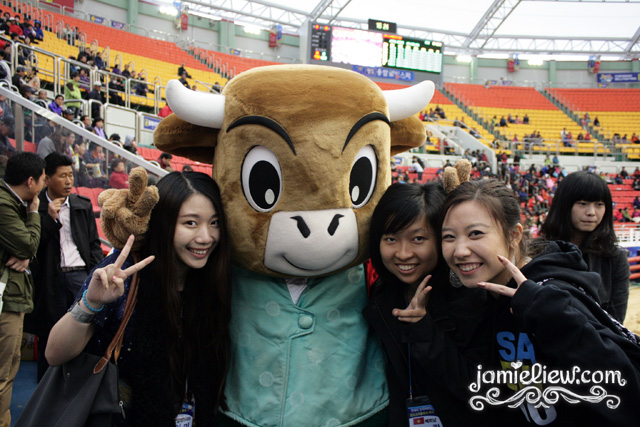 that’s Linh from Viet and Cassie from HK! =D. this cow is super cute haha. Cassie had a picture banging heads with the cow super cute. 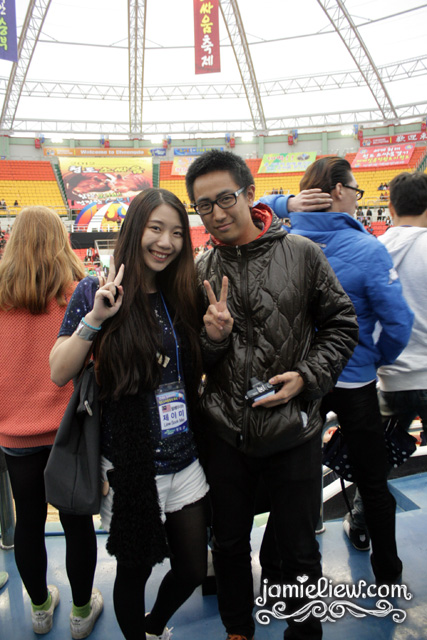 Andre and I were really “famous” throughout the trip for being the latest to board the bus EVERYTIME for wanting to take more artistic pictures. hahahaha. we were so famous the teacher would call out our names eventhough there are many people who were late as well at many times U_U. 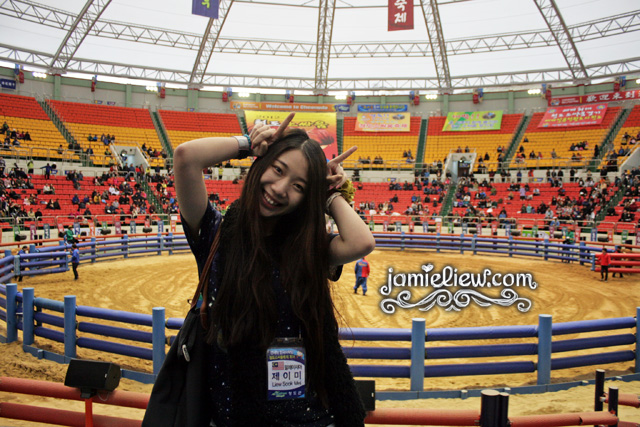 taurus girl. with her *coughs* horns. 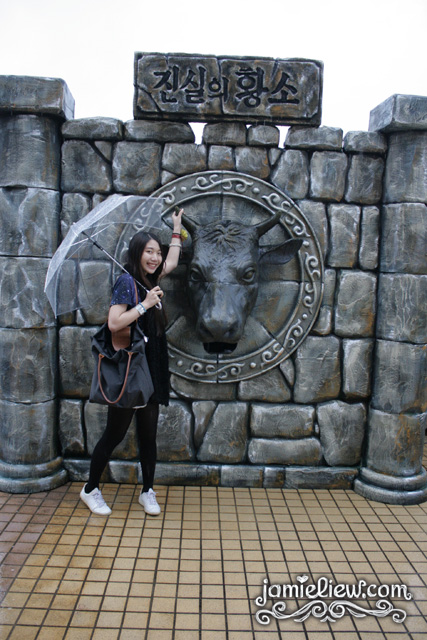 pfft someone took my umbrella in the restaurant. mainly because hers was see through as well but hers had a black body U_U. mine was silver and I prefer silver pfft. shall not be so stingy on something this cheap. haha 3,000won =D.