just 2 days ago I went all the way up North (less than 100km away from North Korea) to visit one of my childhood Korean friend who’s in the army right now. the National Service here takes about 22months to complete and all I know is that it’s really a daunting task for even macho men. but only after you’ve completed the army, you’re a true man here. 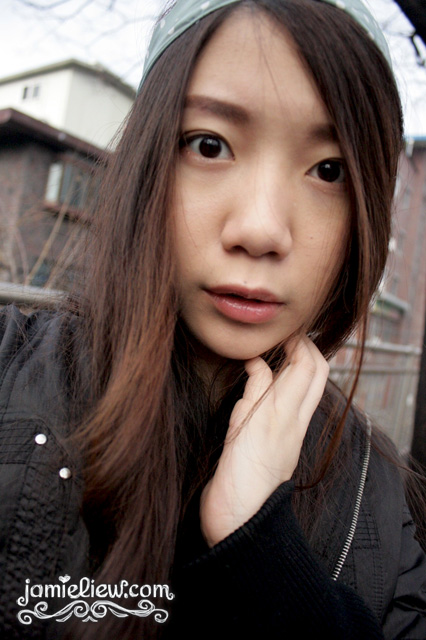 found a way to transform my cutesy hairband into a hippie bandana =D. 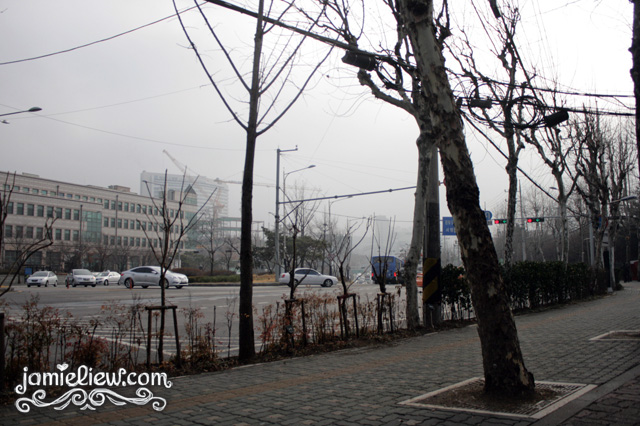 it was a cold cold morning. just look at those fog. that’s Yonsei on the left =D.

my friend’s brother came to pick me up from my Uni and after that I just slept in the car. and once I woke up. I saw this. 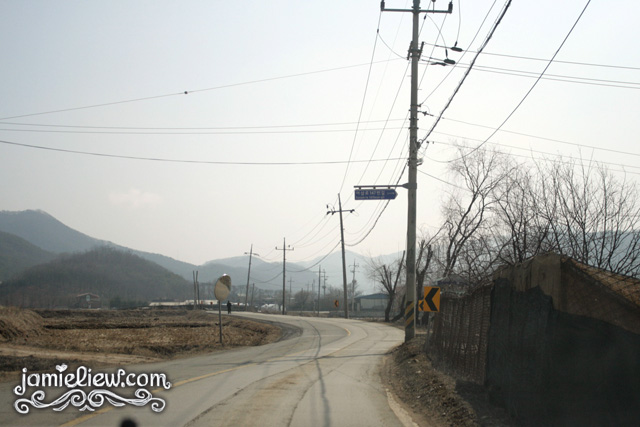 we’ve traveled to rural Korea. @_@. according to my friend’s brother it’s the “kampung” of Korea. hahah. 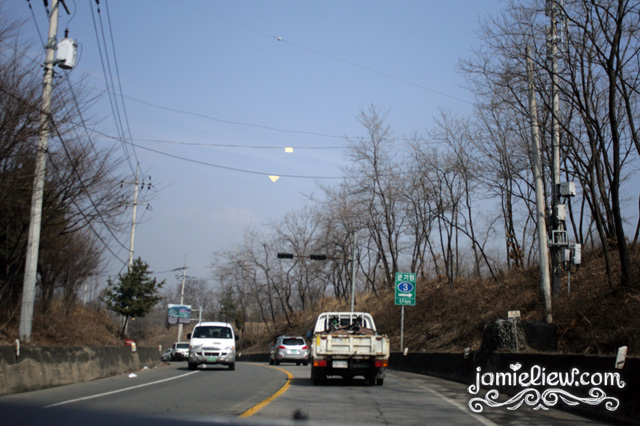 then we arrived at this camp. and yes, I ENTERED A KOREAN MILITARY CAMP (LIKE A BOSS!). but for safety purposes I did not take any pictures. there were two soldiers with huge guns at the main gate, guarding the camp like it’s prison hahaha. and the camp is pretty much like how I’ve expected it to be. it looks something like a Korean school with the field in front of the main building. very neat. upon entry there’s a map and on the side there’s a little canteen for the parents to cook all kinda stuff for their loved ones in the army. 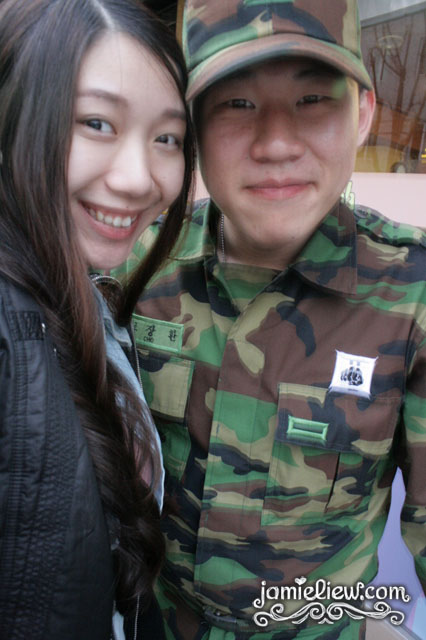 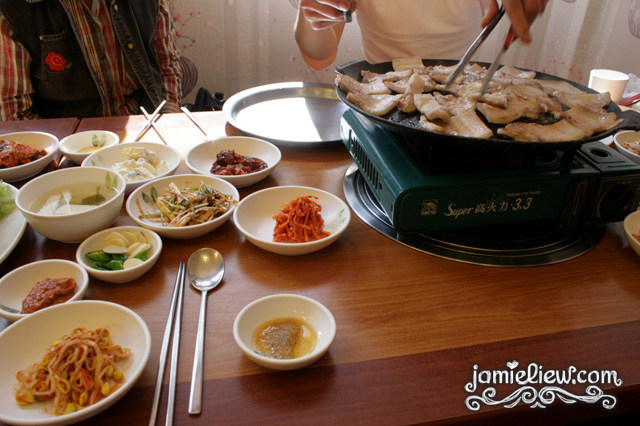 and we went for SAMGYUPSAL! 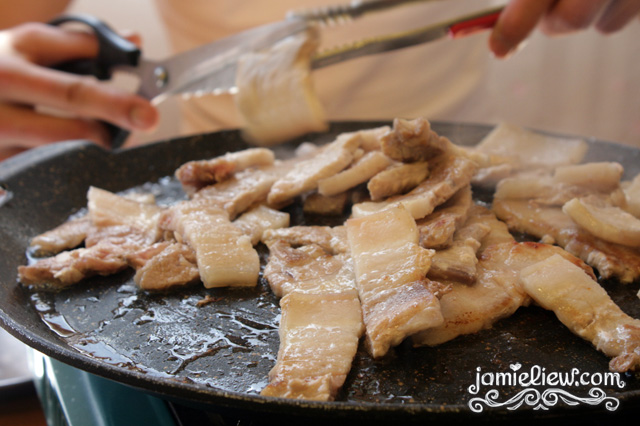 삼겹살 Samgyupsal which literally means 3 layer meat (and fats in between) is one of the all times favourite here. it’s pork, so sorry to my muslim friends =S. but trust me on one thing is that no Samgyupsal in Malaysia can taste as good as the ones in Korea. it’s true. I went to this famous restaurant back in KL but I think thought Samgyupsal sucked. until I had this here, it was bliss. 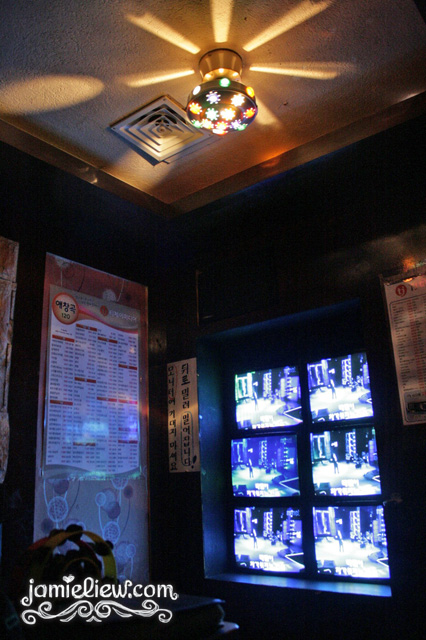 they call it the “Kampung Karaoke” but it was pretty not bad. better than the Korean ones in KL already. awesome thing is that they have this retro disco light that goes on whenever a song play. 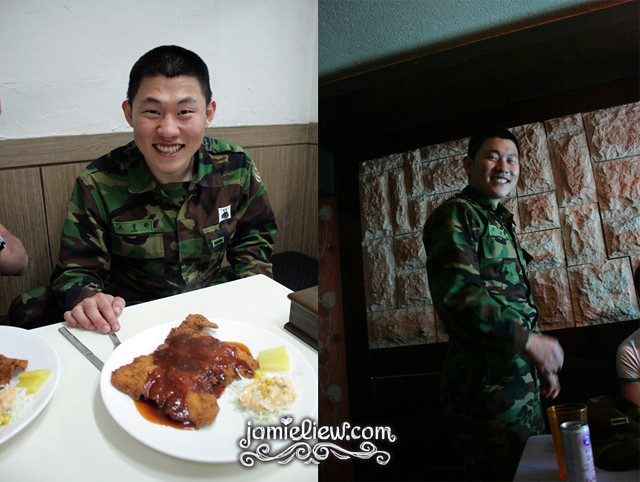 happy soldier with his Donkatsu and happy soldier in a Noraebang. Norae means song. Bang means room. get the picture? =D.

this guy is so happy because it’s the first time he came out in 2 months hahaha. I guess being a soldier tells you how to cherish your everyday life outside the camp more =P. 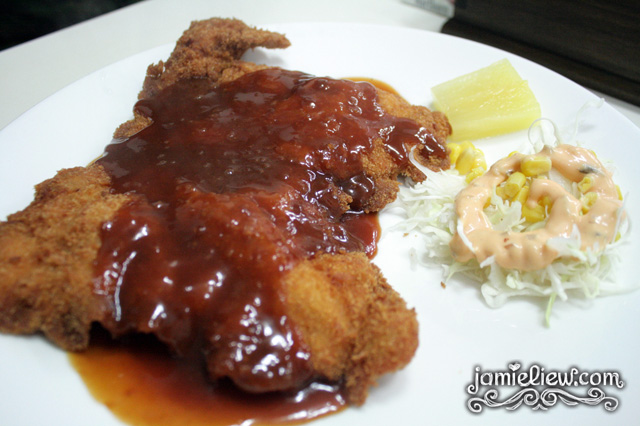 Donkatsu or Tonkatsu is very famous among Koreans. I am not sure why because it’s just a piece of fried pork cutlet but they alllll seem to enjoy it very much hahah. but at least the portion is damn huge =P. 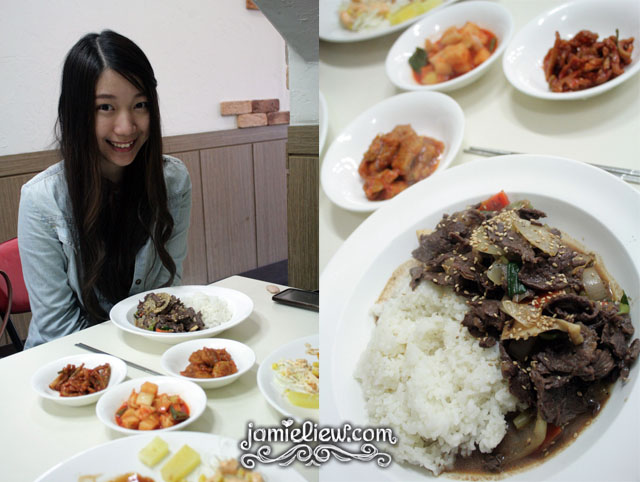 my 불고기 덮밥 Bulgogi Deopbab. it’s marinated beef with mushrooms and onions. yummy. but very big portion as well. hence why I got fatter here. 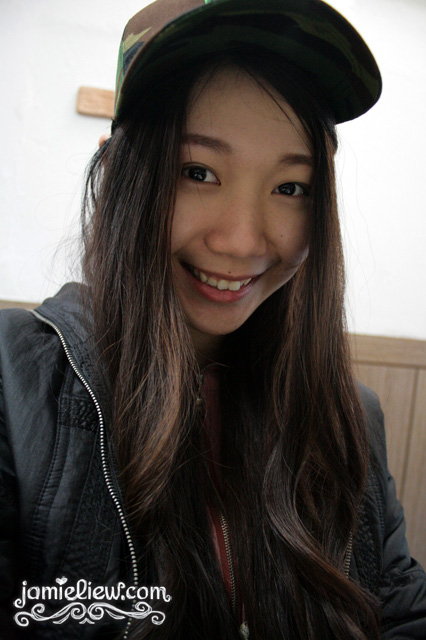 the army cap! and that’s how sick I look. I guess it’s very easy to catch a cold at such a cold weather. and cough. T_T. hate cough. my chest and stomach hurts from coughing too much @_@. have already recovered from my slight fever and is now fighting my cough away! 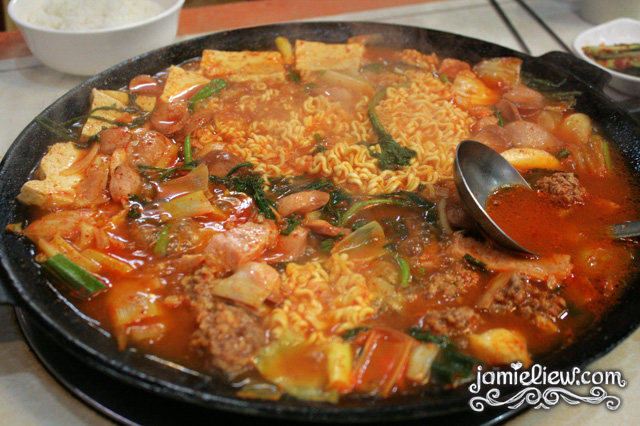 and dinner. this is called 부대 찌개 Budae Jjigae. literal translation? army stew. my friends laughed at me when I said I want to try the army stew. I guess it’s just better to say Budae Jjigae after all. hahah. the Budae Jjigae consists of many types of ingredients like sausages, ramen, rice cakes, meatballs. but all I can say is.. it’s delicious. love how spicy it is =D. 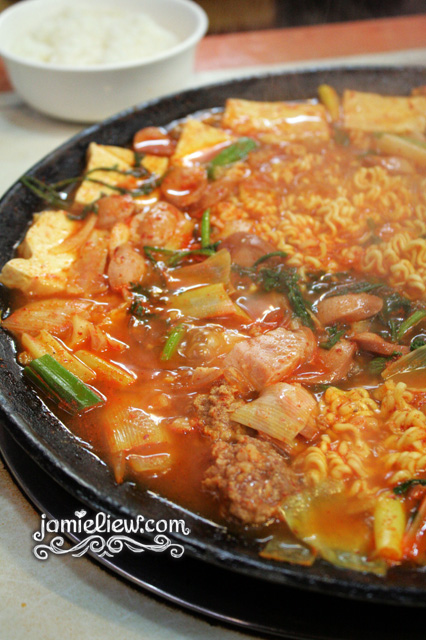 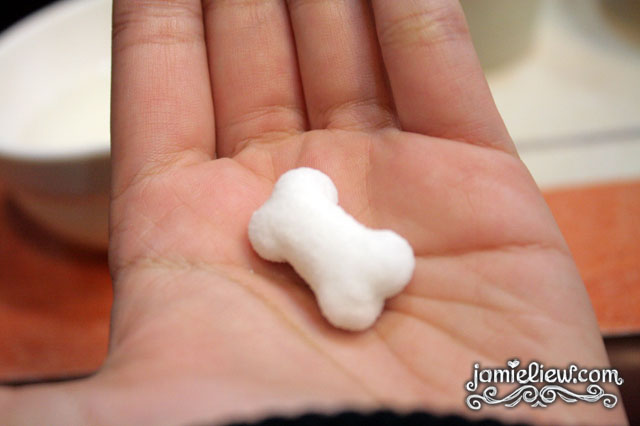 and the dog bone shaped candy that tasted like mentos but it’s rather hard in texture. haha. 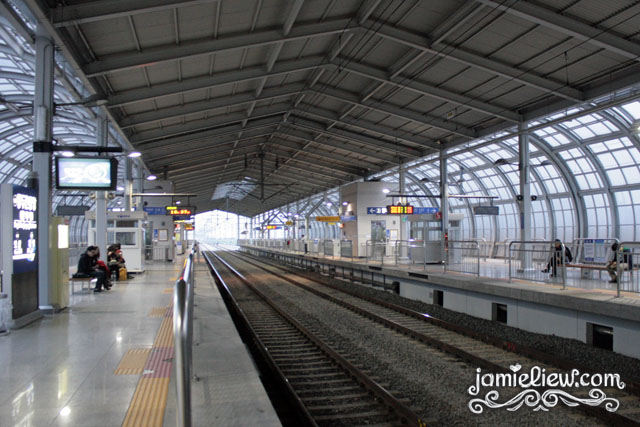 took the train back since I want to get back earlier. to be honest, it’s pretty scary when you walk by the dark alleys alone at night. so better just go back before midnight when there’s still many people walking around in the street. 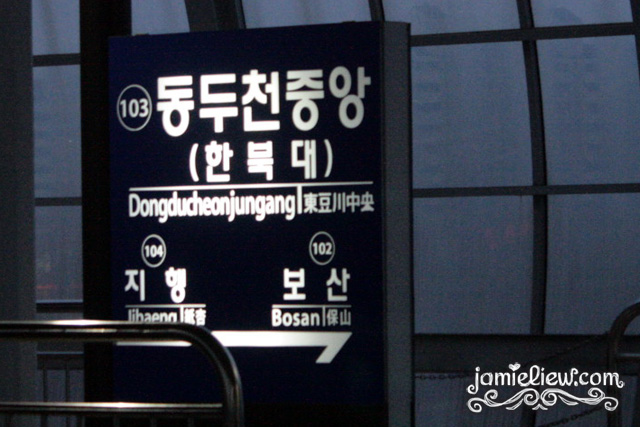 I was laughing alone at Bosan. I guess only Malaysians (and Indonesians?) will get it. 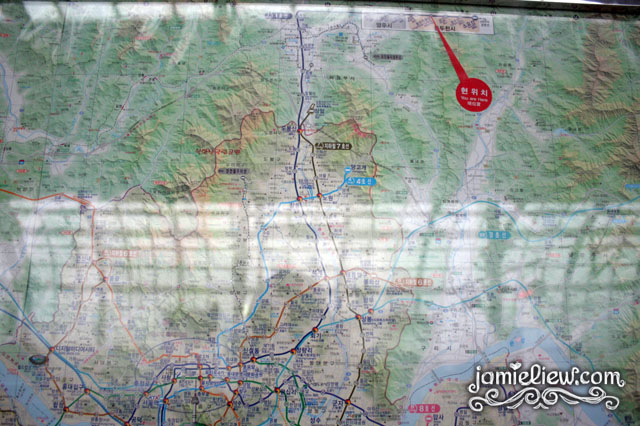 always stick to the subways whenever you’re traveling long distance. long distance travel are always very worthy with subways here. I had to take 29 stations to get back home. and it only costs below RM5. seriously, look how way up North I was!

That’s really cheap for the transport!!!! Ahhh.. What a good experience of visiting friend in the army =) The Budae Jjigae seems delicious!!! and of course the samgyupsal !

Awwww, not even pictures of guns at the entrance? 😛

Im so hungry now from looking at those pictures. anw, can i use T money for taking the train from incheon airport to hongik university? or do i have to buy a separate ticket?

Dont go too near to the north boarder ….very dangerous 😛 I heard from news sometime north do shelling into the south area 😛