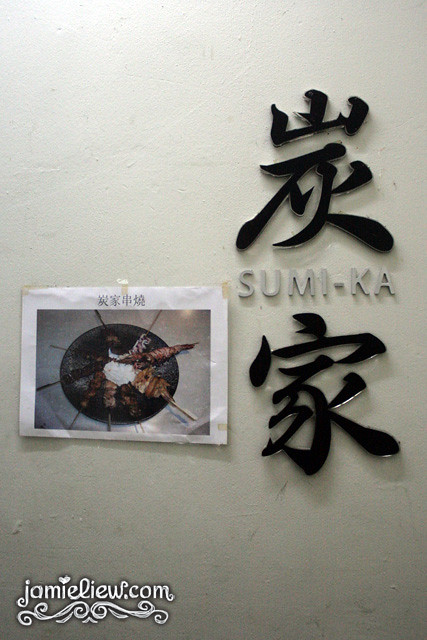 located at the more quiet side of SS15, Subang Jaya, it’s actually pretty close to the colleges around. weird how it isn’t that known or noticeable arond. but to my surprise, you need to BOOK before you get there because it’s always filled. judging from how most of the shops around barely have 10% of their tables filled. 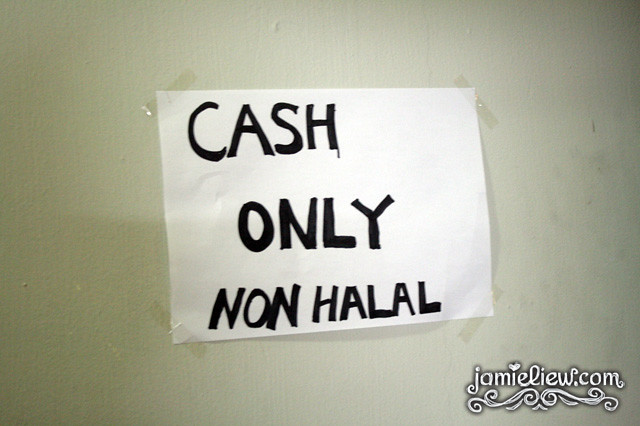 the picture says it all. CASH ONLY, and NON HALAL. 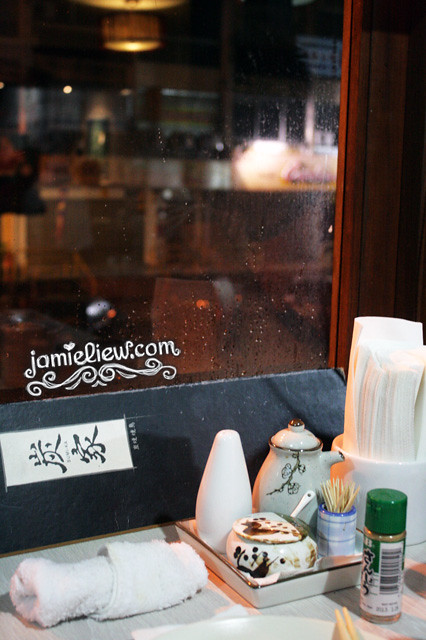 this little shop actually brings you to Japan with it’s wooden windows and interior. 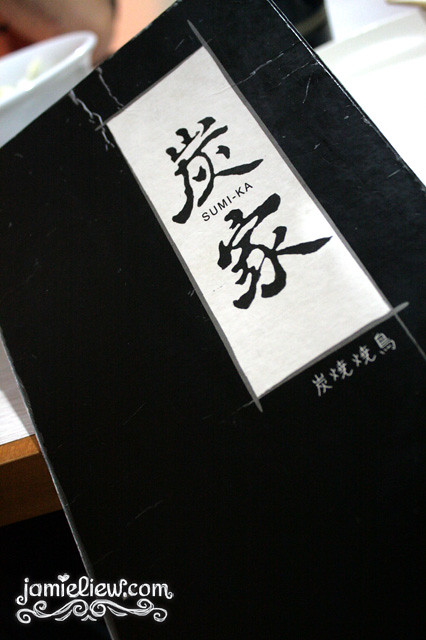 packed with only Japanese people, Sumi-Ka offers a wideeeee range of alcohol; taking up almost half of the menu.

the food here are VERY GOOD alcohol snacks. so you might really want to drink. 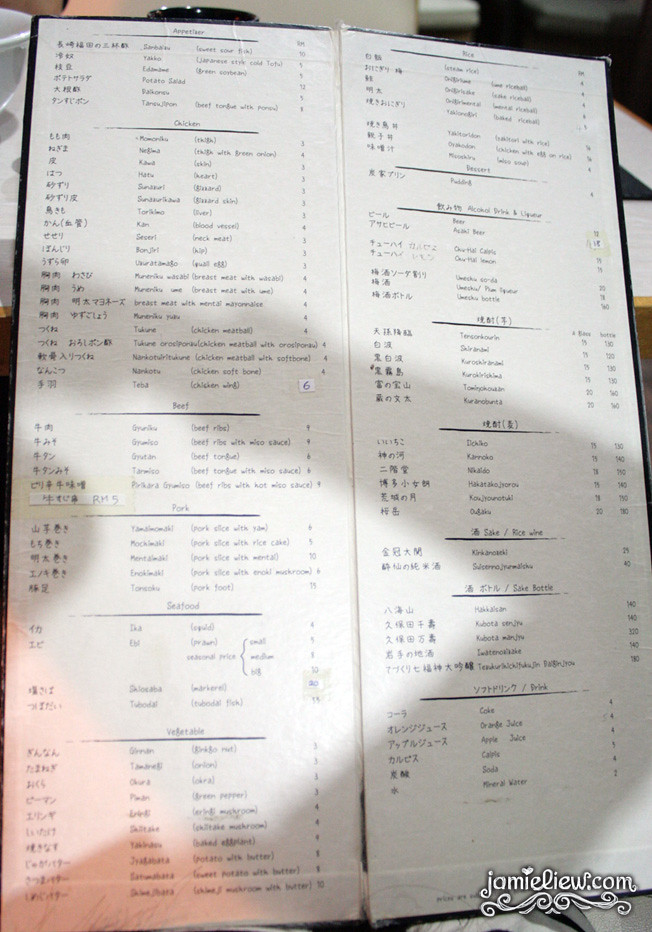 Sumi-Ka is more of a drinking place with awesome BBQ snacks rather than the usual Japanese cuisine. but do not look down on sticks of meat, they can really make you full! 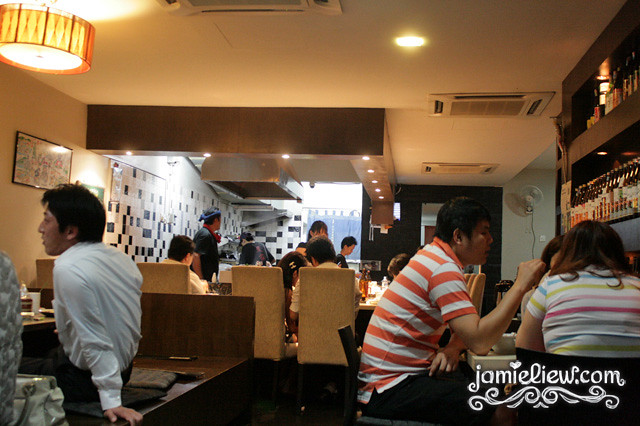 packed at eight. the Chefs are Japanese and I assume that everyone working there to be able to speak Japanese too. some of the waiters and the lady boss can speak Chinese (English too I think) so no problem with the language barrier. 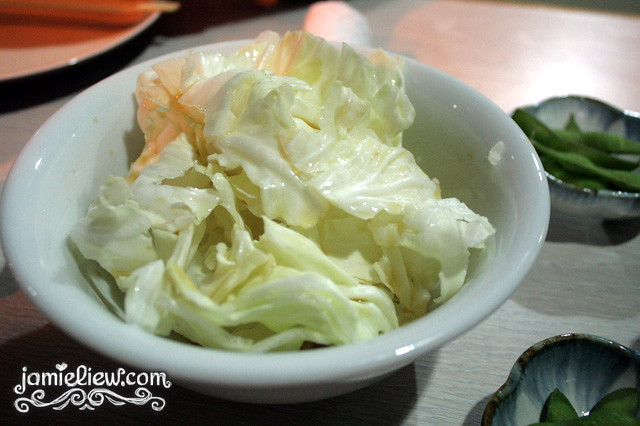 the snacks on the house. they will refill these raw cabbage soaked in their own special sauce which seemed like vinegar/apple cider as soon as they spotted an empty bowl. 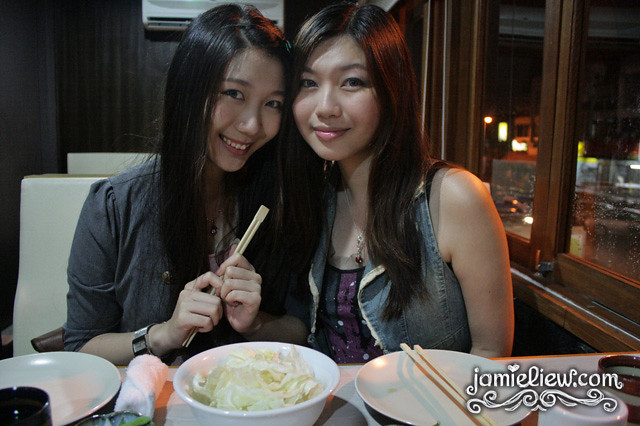 this was actually my farewell dinner with my sister and her best friend, William. =D. William knew I am a fan of Japanese food and thought I would really like to reminisce my days pigging out in Japan. he succeeded. =P. 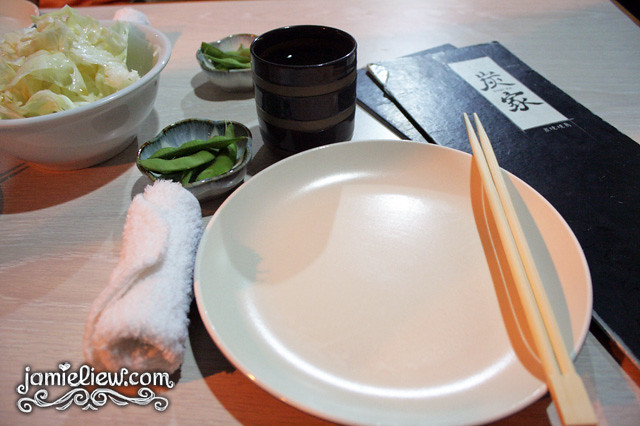 a small bowl of Edamame for each of us! 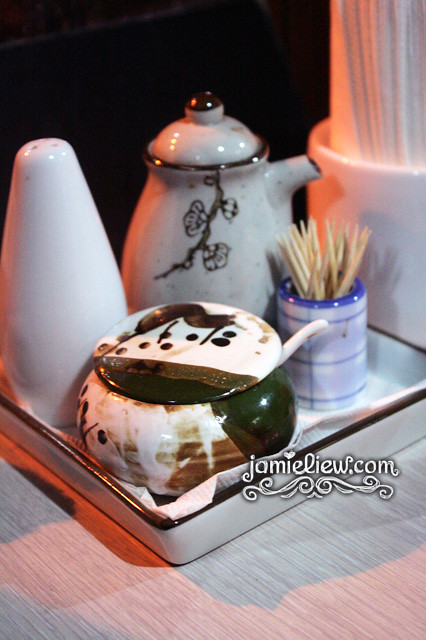 huge fan of these mini ceramic products. the spoon is uber cute. super mini sized. you shall go there to see it hahaha. 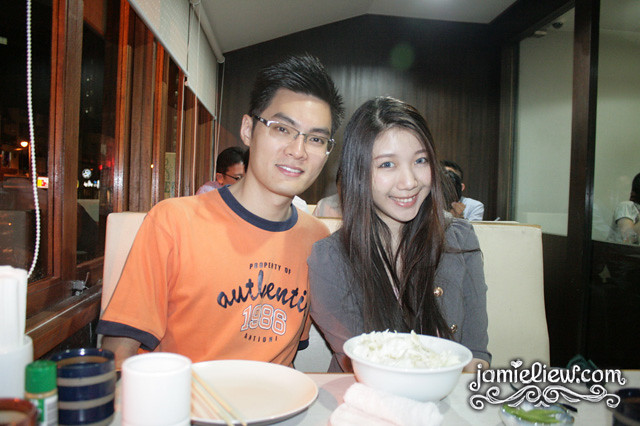 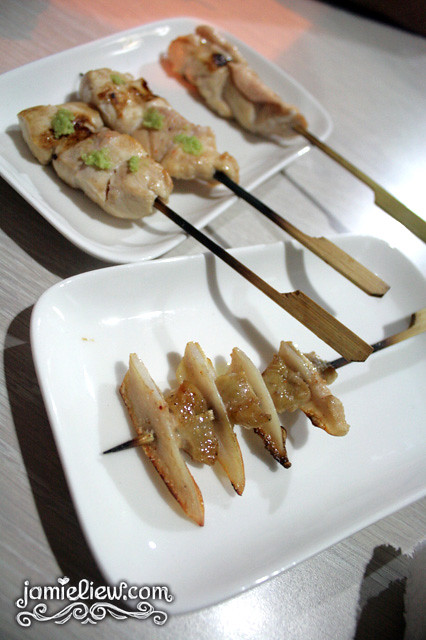 chicken breast sticks and chicken soft bones. the soft bones are not as delicious as what I expected though. but still alright. 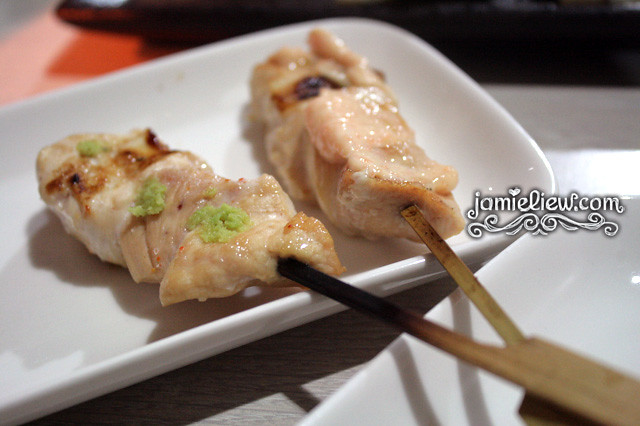 the chicken breasts are pretty awesome. unlike normal breast meat which are rough, dry and hard, these are smooth and chewy, one of my favourites here actually. it’s a MUST TRY. I especially liked the “mentai” one. mentai = mayones. 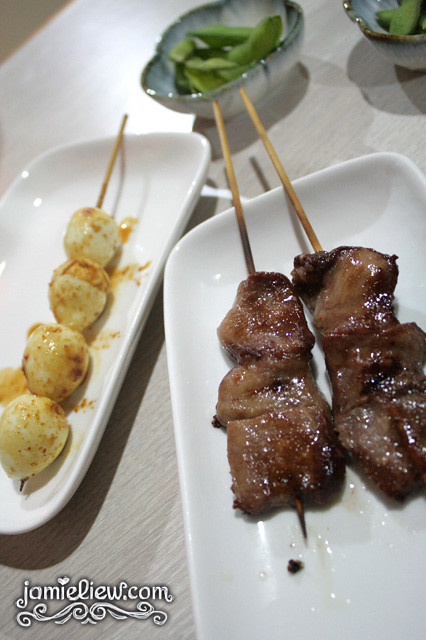 the bird eggs were.. just eggs. nothing too special in my opinion. but on the other hand, the other one, the ox tongue is SUPER AWESOME. we had so much of that. stick after stick. so so so so so good. the idea of it being OX’S TONGUE might seem weird and disgusting but seriously, it’s one of the best parts of the cow. =P. 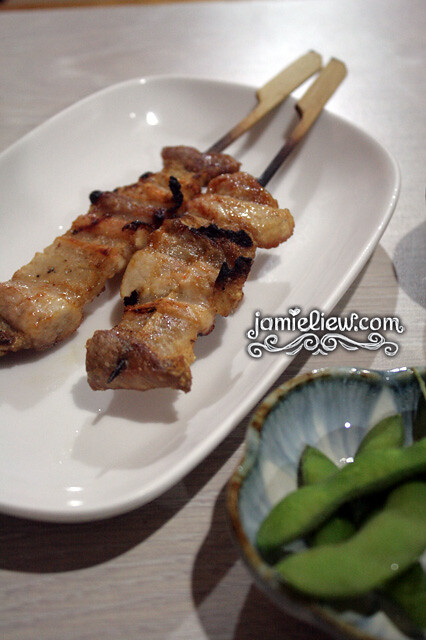 the 3 layer pork meat, or what I call the “Samgyupsal” in Korean. yum yum yum. 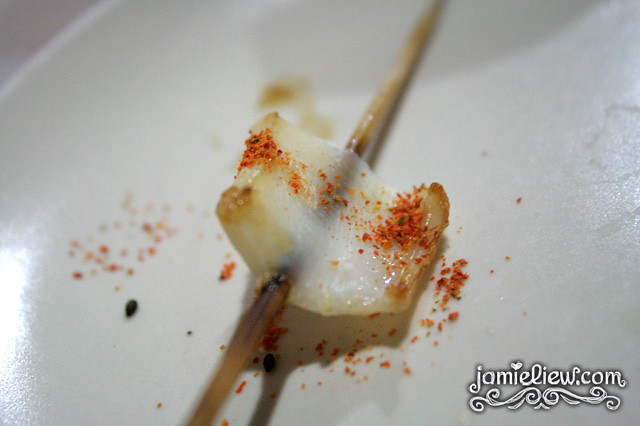 squid! I sprinkled some chilli flakes on it because it’s better like that. hehehehe. 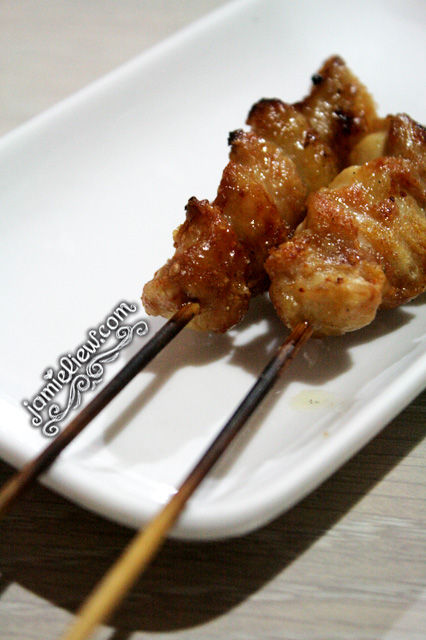 I have no idea what this is but it tasted like chicken fats. so sinful yet so delicious. 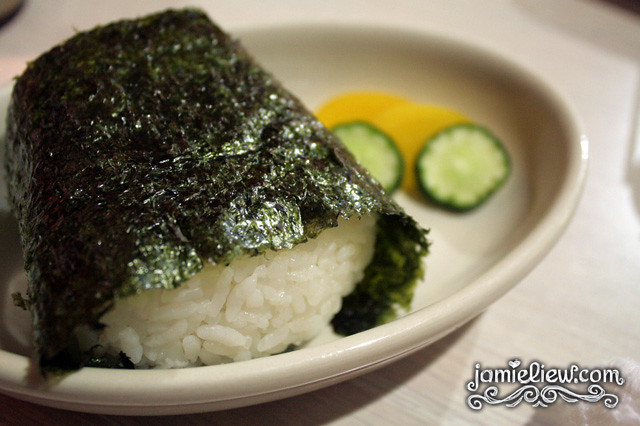 the ONIGIRI!! with salmon filling. I think that this is one of the MUST TRYs in this shop. what’s better than a ball of warm rice (triangle actually) with fresh seaweed and salty salmon filling. yum. 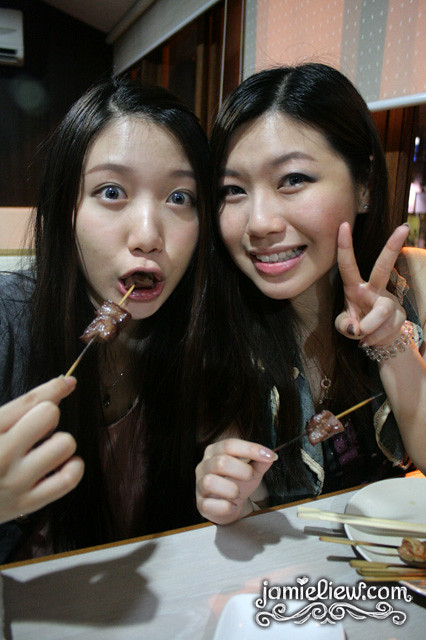 the ox’s tongue is me and my sis’s favourite hehehehe. 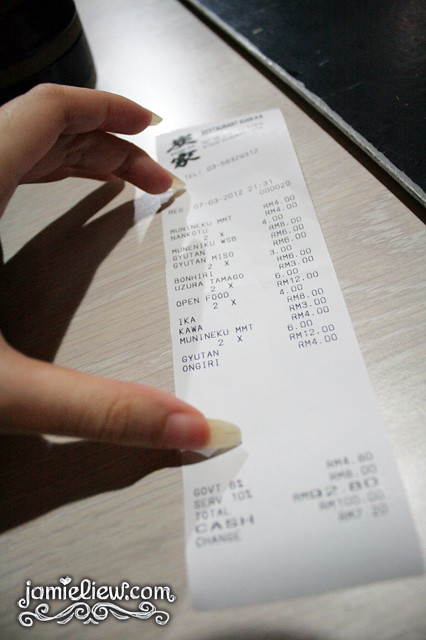 our bill came up to RM92.80. the prices are reasonable but we didn’t order alcoholic drinks so… hehehe. 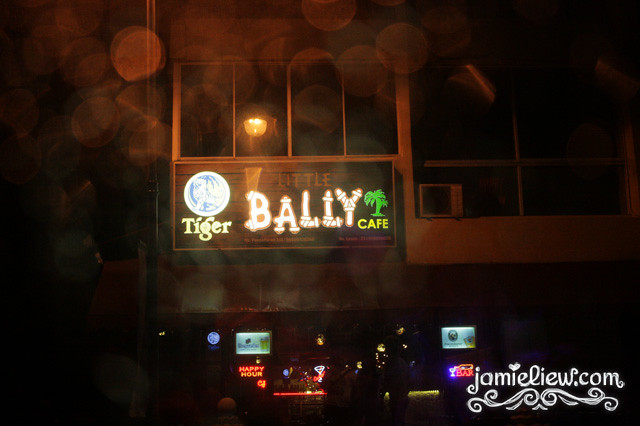 I am not too familiar with this area but then as soon as you see BALLY cafe (because the Sumi-Ka restaurant is very very hidden), look opposite. it’s very near. 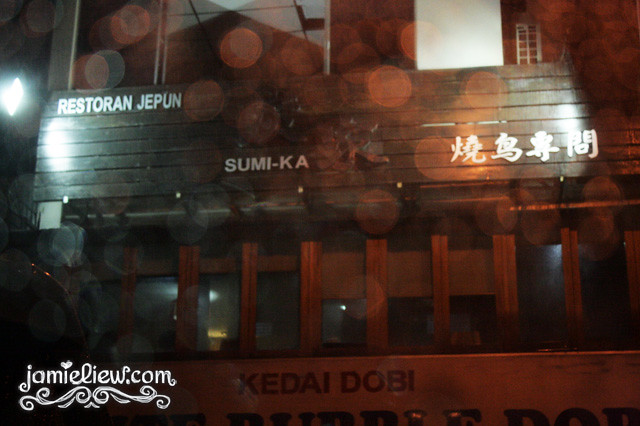 Sumi-Ka’s dim signboard. the lights reflecting to it makes it hard to notice but you’ll find it =D. it’s around those shoplots near Inti/Taylors College. those shops behind Asia Cafe.

do you know why Wang Lee Hom is dubbed as the “Music Man“?

it’s because he can play a crazy number of instrumetns. probably the most among celebrities. piano, violin, bass, guitar, erhu, harmonica, drums, guzheng….. and the list goes on.

he’s back again after his last concert “Lee Hom Music Man: Live in Malaysia Concert” which was a total success, with Music Man II: Live in Malaysia 2012 Concert. and we all know that his concerts are always promising. Wang Lee Hom is like the most perfect guy out there; talented and handsome. he just have it all. SO that is WHY… it is only natural that EVERYBODY WANTS TO BE HIM.

apparently, there are many Lee Hom wannabes eventhough his shoes are pretty big for anybody to fill. but it seems like these people think they’ve got what it takes to be like him! 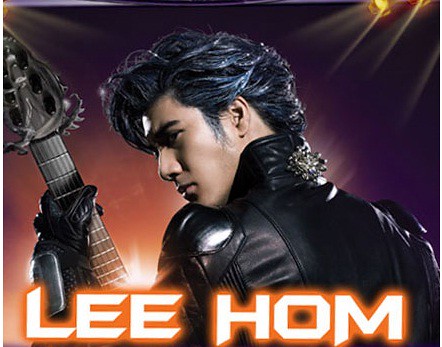 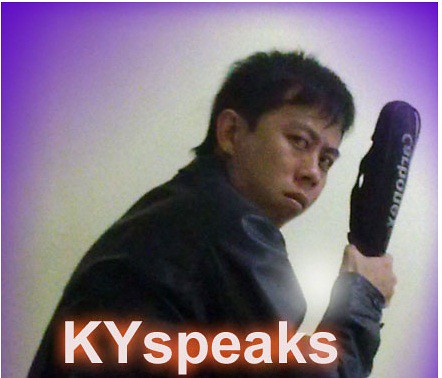 check out this video of one of his wannabes =P : http://youtu.be/M9ME0BSMv8U

or those that think that they can sing like Lee Hom (which I think is pretty close. I am a uber Jason Chen fan if you do not already know.) CLICK! : http://youtu.be/mboOyehHTGg

OR those that think that they can PLAY instruments like Lee Hom : http://youtu.be/ytENy91Gpyw

well, it’s not only us non-celebrities whom wants to be like him, but there are actually CELEBRITIES whom are almost there in being like him. 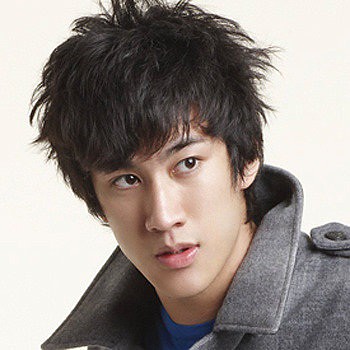 example? Aarif Lee. almost like a clone of Lee Hom. (yes, he has Malay blood. hence the name Aarif.)

but here’s my main topic : BE LIKE LEE HOM AND WIN!
if you’re already going to swagger like Lee Hom, why not win some prizes at the same time too? how? easy. just send a Video, Sound Recording or MMS of your best Lee Hom impersonation! you can be as creative as you want; funny, cool, charming, cute.. just anything that would impress! so here’s how you can join :

1. Send in a Video – submit video(s) of you singing/impersonating/lip-syncing/dancing/playing instruments to any Lee Hom songs! you can even make a Parody out of his songs! well, the more creative you are, the higher chances of winning! the video should but 30seconds-10minutes long uploaded to Xpax’s Facebook app at www.facebook.com/xpaxfb! you can go check out how your competitors are and just remember to BE BETTER than them!

2. Send in your Voice Recording – think you can sing like Lee Hom? then sing! just dail *22009 and karaoke or sing along to a Lee Hom song! sing your lungs out and who knows? you might just be good enough to melt the judges heart!

3. Send in an MMS – just snap a picture of your most awesome Lee Hom-like pose and send it to 23131 to be in the running as well as receive FREE MMS content every week! 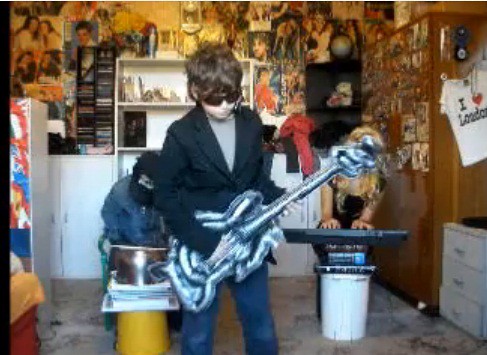 too simple to be true? well, BELIEVE IT.

PS : you can also get exclusive Lee Hom downloads by getting on The Cube and dialing *888#. then, select Hot Deals and choose Lee Hom or go to http://m.thecube.my.

tunimaal @ A Gaijin in Japan

To the 2 sisters: KAWAII NE
To the food: Oishii Ne
To the NON – Halal: sorry but I will not come 🙂

Next time come to Japan youy will eat real and great Japanese food, who knows maybe I’ll invit you haha

Food was a really nice treat to see in this blog… There aren’t many Japanese Resturants (Even less good ones) in South Africa… But I’d love to travel abroad to Japan and just eat to my hearts content. It’s the only time when I curse my studies and work but by two years from now I’ll be able to go overseas and tour around.

Some of these Lee Hom videos are just insane… tough competition right there.