it’s true, we foreigners are known as aliens here.

the Alien Registration Card is probably the most troublesome thing you have to do being a student here. it is actually a card where you need to get to report to the government saying that you’ll be here for more than 90 days. if I am not mistaken, you still have to get it done even if you’re here for a term. but oh well, it’ll only take a day. 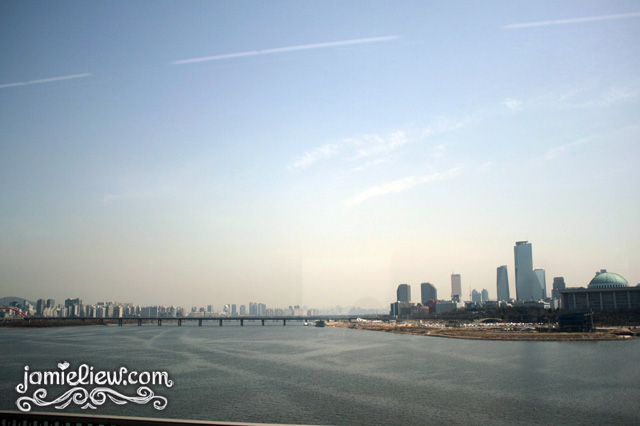 the view of the beautiful Hangang (Han River) from the railway. 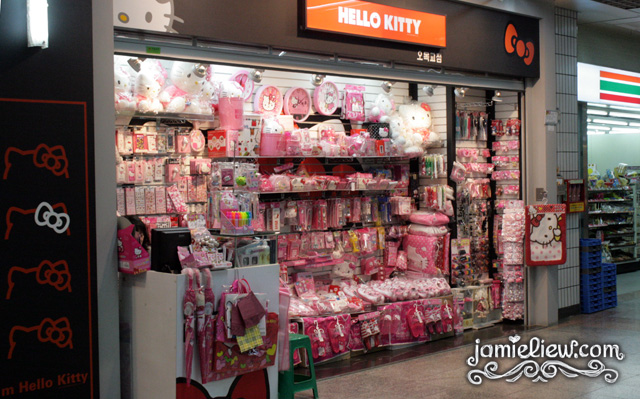 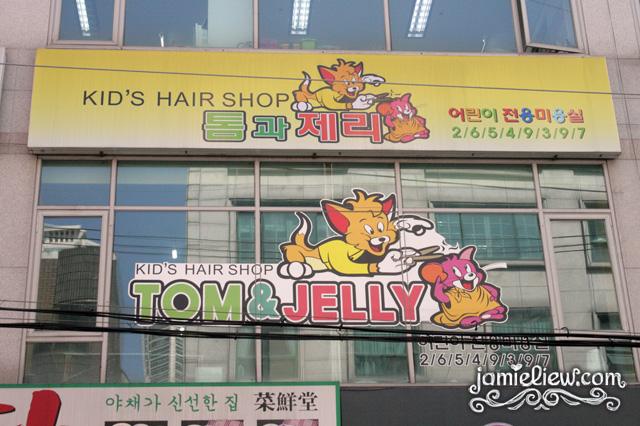 I literally stopped to laugh at Tom & JELLY. ifyougetwhatimean.jpg. =P. so cute. I jelly Tom’s hair! 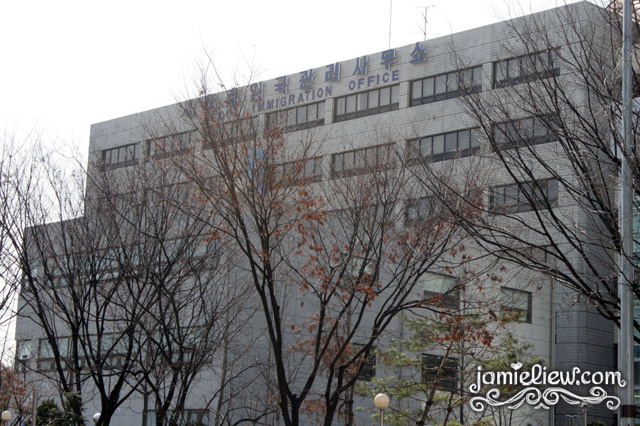 this is how the Seoul Immigration Office look like. do come here early. because like us, we arrived at about 1 something, took our numbers and guess what. there’s like 180 more people in line before us.

also, because the pictures I took have a blue background I had to go to the expensive (6,000won) photobooth on the 3rd floor. it’s horrible because you can hardly hear the machine and your picture will be taken almost instantly after the coin is put in. so my face was the unprepared/non-smiling/verydulanlook. and that will be in my alien card FML T_T. I didn’t want to spend another 6,000won so there goes my ugly alien card picture =/.

documents required :
– 1 passport photo with a WHITE background
– certificate of admission (they will take it. and not give it back.)
– receipts of the fees you’ve paid to your Uni
– passport
– 1 filled form

do not worry about the language barriers because there are plenty of helpers in yellow vests around whom I assume are from the Philippines so you can speak English to them =D.

I heard that if you live in a different location/or just a little further, sometimes you have to travel to ANOTHER immigration office (which is very very far) and they might have different requirements which might require you to go several times. 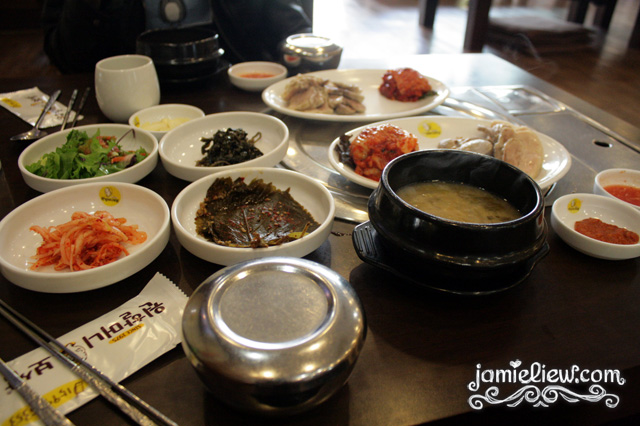 since we had so much time, we went for lunch. and believe it or not. we had our lunch, my friend went back to his Uni in Sinchon for his class, came back, AND IT’S NOT EVEN OUR TURN YET. unbelievable.

but he said the last time he only waited 30minutes. so I guess, go there early or on a day which you think people wouldn’t find time to go to the immigration office =S. 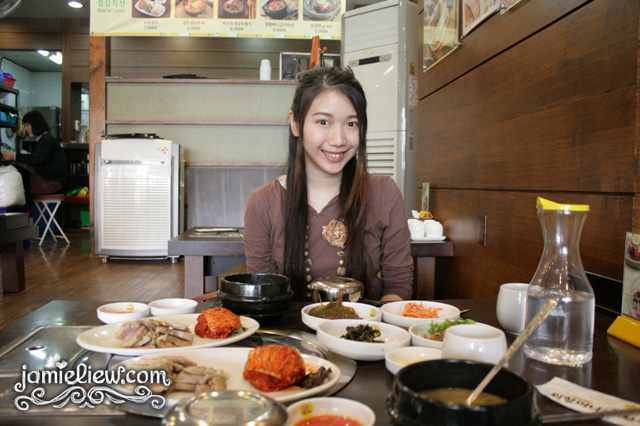 my stone sick face. so sick, my mom noticed it on webcam before I even told her I’m sick. pfft. and she commented that I look sick in most of the pictures I’ve posted on my blog T_T. well, I AM SICK! =(. getting better! 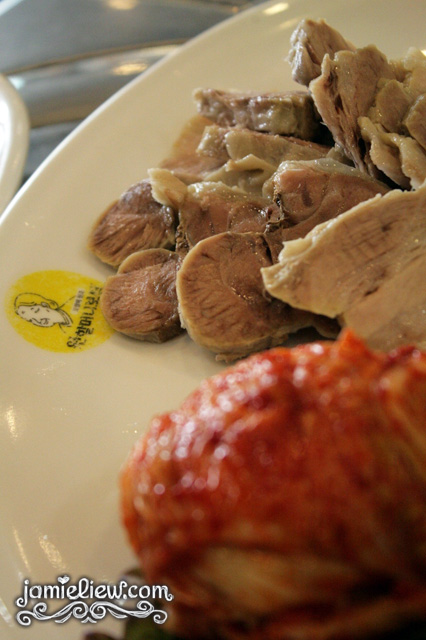 this is called Bossam 보쌈. ssam is actually wraps. like when you wrap your meat in a piece of vege, that whole thing is called ssam. so this is the same, you wrap your very delicious steamed pork in the huge piece of kimchi, dip it on this very salty prawn sauce or add in ssamjang 쌈장(ssam sauce) together with onions and pepper and chuck the huge ssam into your mouth.

believe me. this is one of the most blissful meals around if you’re craving for meat. meat or gogi 고기 is what you’ll occasionally crave because if you have too much jjigae (stew) or stuff like jjajangdeopbab/currydeopbab… you’ll eventually find out that there are no chunks of satisfying meat in any of those.

yesterday, I went on a tour with Natalie whom I’ve known through my blog to my University. man, Yonsei University is huge. and the Library is magnificent. I was so gobsmacked by the fact that you need to reserve your seat and you can only use it for a certain amount of time. there are many study rooms and tables… and it all sums up to 7 floors with a coffee shop on the top with a huge outdoor terrace. but it was raining the whole day and the wind was blowing like mad so I didn’t have a chance to capture some pictures and also because it wasn’t so convenient. but I will take pictures of it in the future so wait up! 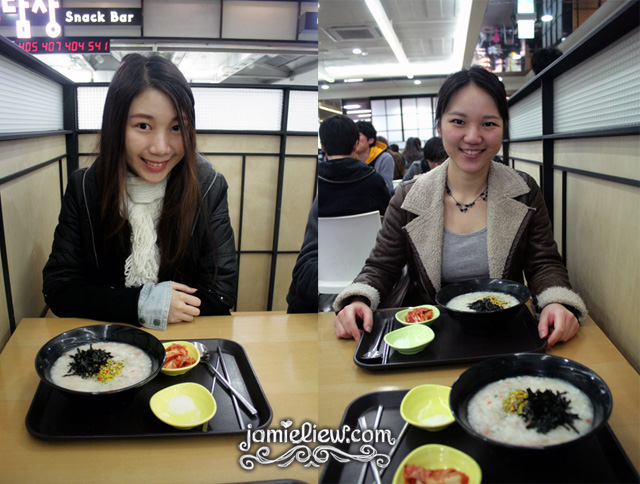 in the mean time, here’s a picture of me and Natalie with our porridge. well, I’m sick! =S. 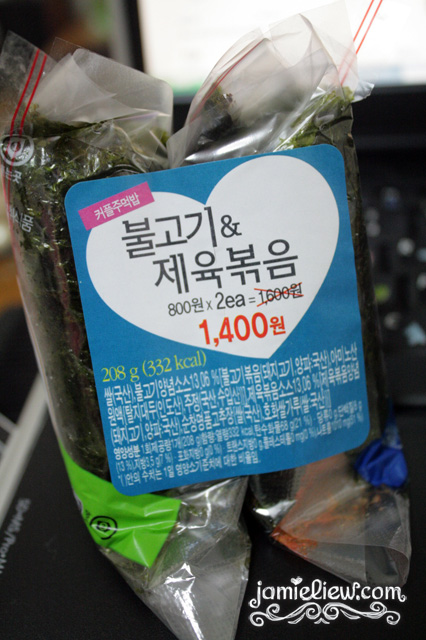 my usual lunch. the very stingy me whom doesn’t want to be seen eating alone bought onigiris for lunch. one onigiri in a not so famous shop (this was bought from GS25, huge chain.) costs only 700won for one. but since it’s from a famous shop buying 2 is more worthy. and only 2 will fill you up a little. 1 will not make a difference haha. 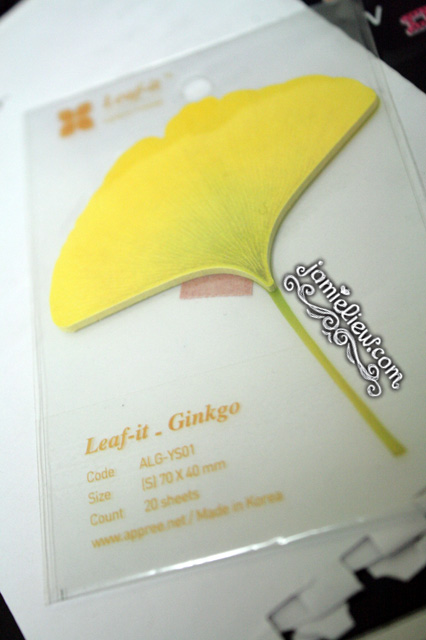 I fell in love with these post-its since the day I knew about its existence! and I MUST HAVE IT. =3. looks very very real. you can actually stick it all over your wall as decorations too! 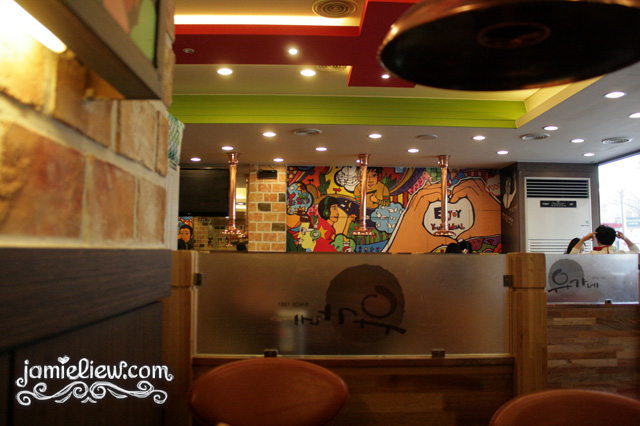 on the not so stingy days, I will be seen eating out alone. Yoogane 유가네 is a famous dalggalbi 닭갈비 shop in Seoul but I was told that Uncle Jang is still better. I’m not sure if it’s worst because I had their dalggalbi fried rice (5,000won) but it was really good =3. 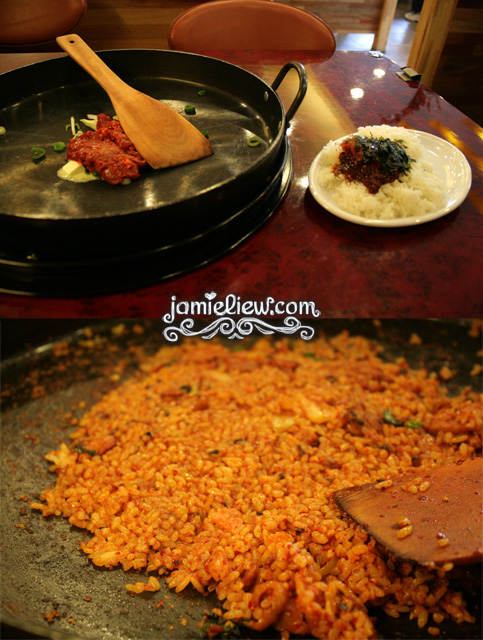 I’m such a glutton I finished all the rice. not sure if it’s because it’s cold here. but I REALLY DID finish the whole thing! look at that mountain of rice! double of what I normally eat.

everyone thinks that I will get skinnier here. I think the otherwise. 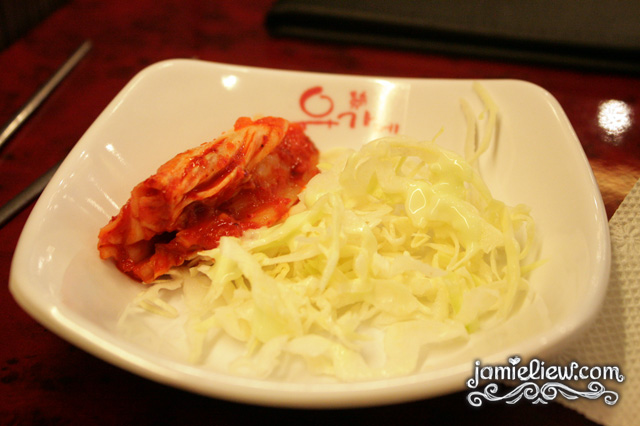 their banchan 반찬 (side dishes) are self service. =D. and they eat raw cabbage with salad sauce as a banchan here!

lets hope I get well soon (and it doesn’t rain so much) so that I can take a lot of interesting pictures to show you all! =D. I don’t actually have the mood for pictures whenever I’m sick =S.

Hi Jamie, it’s me again. What about the bank account? I was browsing woori bank’s website, and I have no idea what kind of bank account should I get…