2 days ago I was invited to a wedding of a close friend whom I’ve never met. for years we’ve been talking about “when he gets married” but the day already came so soon! I was so gobsmacked when I first found out last year because they were the first of all my friends to actually announce that they will get married! I felt that in marriage, age is nothing but a number, and starting a family with somebody you love is just so magical, it’s like.. a dream come true. previously, he had always had plans to marry her right after uni and no doubt he is a man of his words!

for a friend whom I’ve met online at the mere age of 13 , I felt like I’ve witnessed their pure love, and because I know how in love they are, I was always encouraging them to get married hehehe. they were so meant to be, I’ve never doubted my vision of them being married!

they made me realize that if you are really in love, distance and obstacles have no excuses. 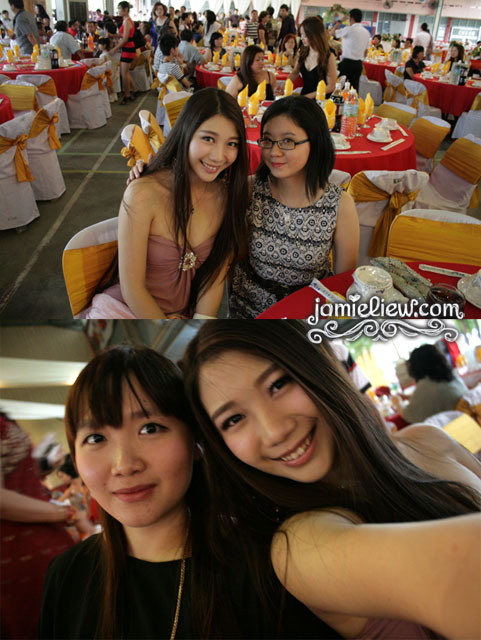 on one of the “when he gets married” conversations I had with the groom, he said he will surely invite me and put me on a VIP table. and through his wedding, I met these few lovely new friends whom I felt like I’ve known them forever. Liz and Elizabeth, my roommates of that night! (and Wendy too!) we had pillow talks and the best thing, LOADS OF LAUGHTER.

I don’t know if it’s just me but as you all might already know, I talk a lot and it doesn’t stop. even more if the other person has a lot in common with me =P. 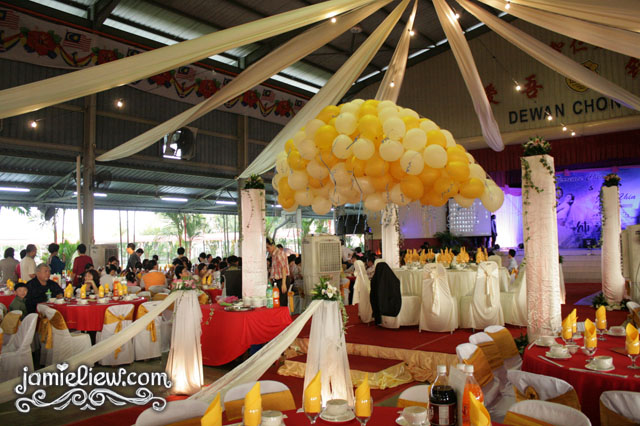 the wedding is located right at the town where he grew up, Teluk Intan (3 hours away from KL!), just about half an hour drive away is the brides home too! it was such a coincidence because they both lived at Perth and their hometown was so close to each other.

I initially did not know but weddings not in the cities are usually done at school halls! and to my surprise, that hall fitted 110 tables! isn’t that crazy? so far I’ve never been to any weddings bigger than this! 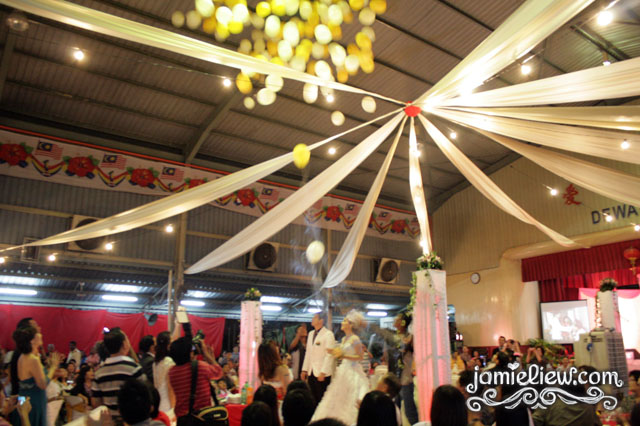 the couple letting go of the helium balloons! 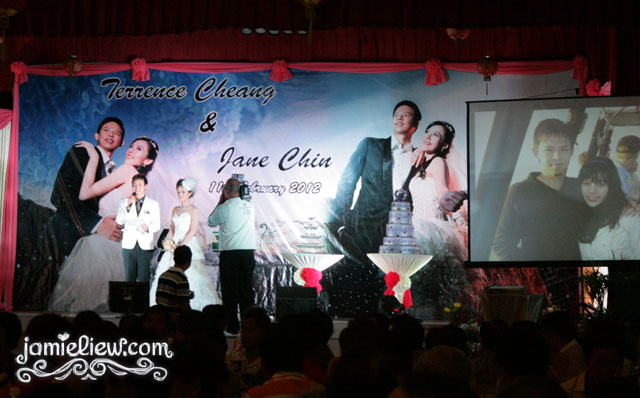 I think I forgot to mention but both of them are very good looking. model-like. just look at their wedding pictures! while sitting there I was literally feeling like as if my celebrity friends were getting married. 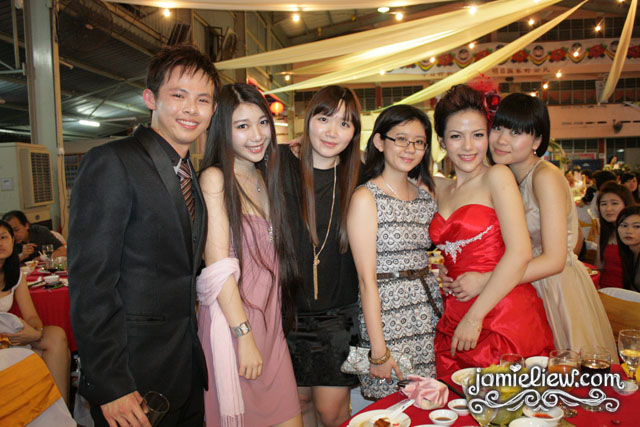 pity them to have to drink over 100 times because of the number of people but their enthusiasm and happiness made them go through every table! and the groom wasn’t even wasted at the end of the night. strong! 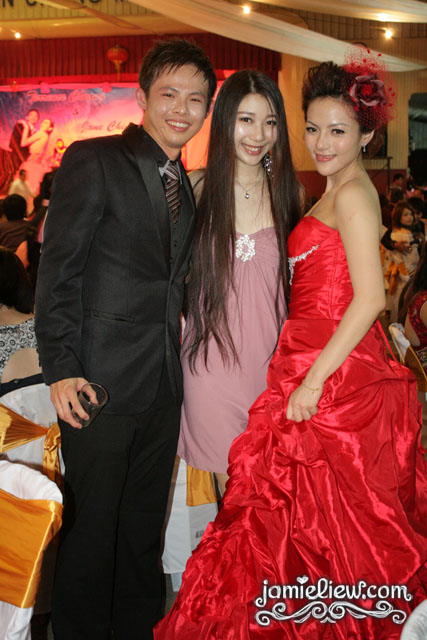 I have known both of them for years and our first meeting is actually on their wedding day and they kept thanking me for being there T___________T. I was really really touched; slowly sinking inside. 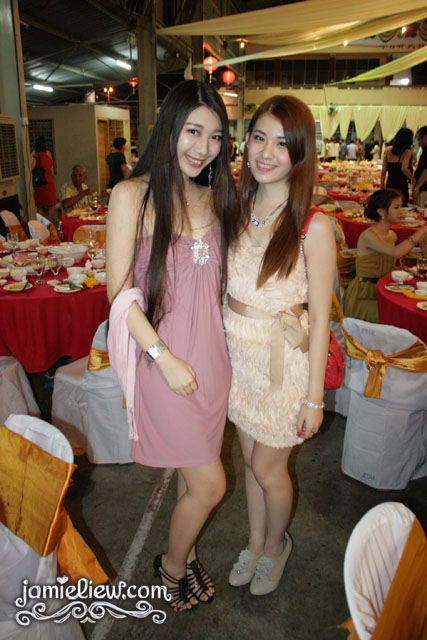 also, my secondary school senior! the celebrity cousin of the groom! initially I wanted to tell her I was coming but I discussed with Terrence and we decided to surprise her hahahaha. though the surprise wasn’t very much of a “BOO!” type. 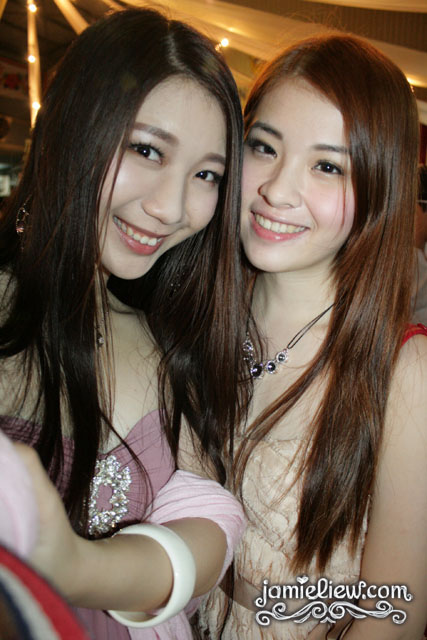 isn’t she pretty?! even Amber Chia said she look like Jolin Tsai!

she didn’t know I still kept in touch with them after so long but oh well, I did! Angeline (above) is a local celebrity since she was a child and there’s no running away from having to perform on her beloved cousin brother’s wedding. 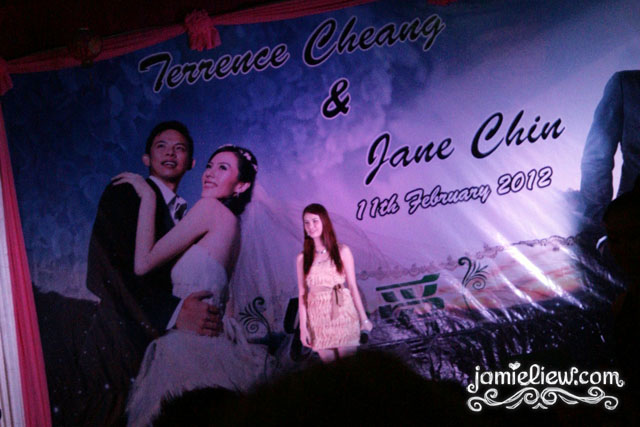 the funniest thing is, I’ve known her for so long but this was the first time I’ve actually seen her perform on stage! 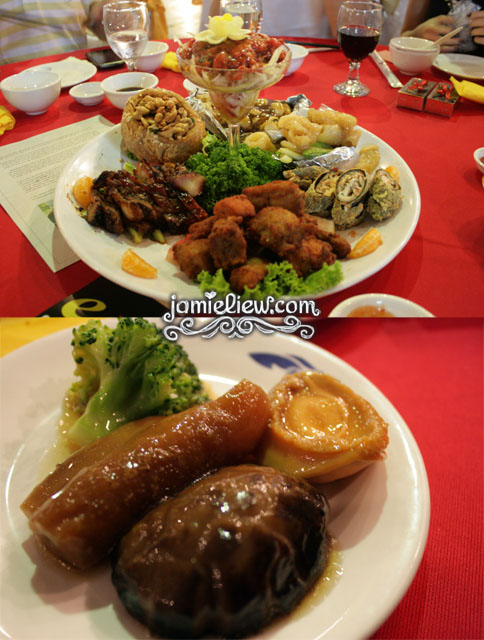 eating very luxurious food in a school is not a common thing to do. =P. and instead of the 4 season dish they had a 9 season dish! eventhough it might seem like it’s 7 but there were 9!

after the whole dinner event we then headed to Terrence’s house for fireworks and wine =D. Jane was so tired from her skirt. it was so heavy! 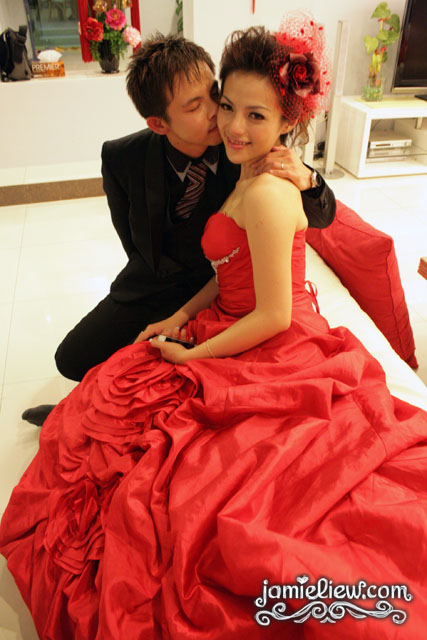 but nevertheless, the loving couple maintained their beauty eventhough very tired. =3. and oh I really love this picture of them. I should be a photographer muahahahahha. 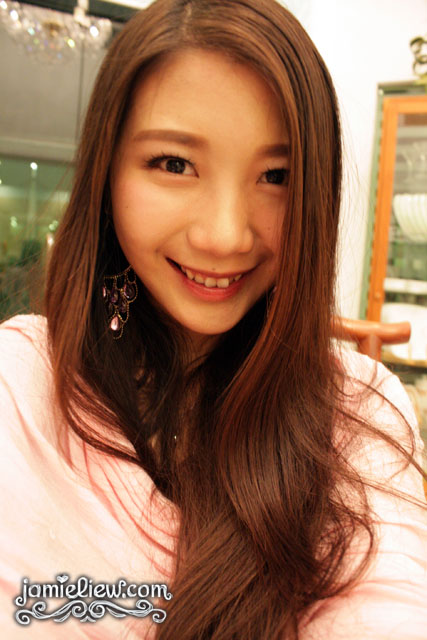 believe me I was pretty tipsy already when this picture was taken. 5 people sharing 4 bottles of wine. I just DON’T get red. 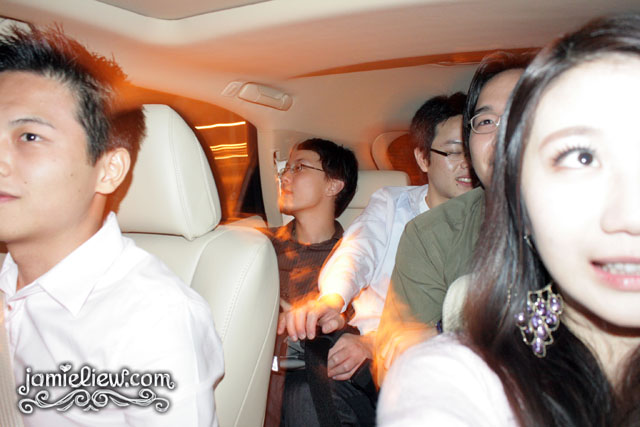 the bride and groom escaped from the drinking session but here, even more new friends! 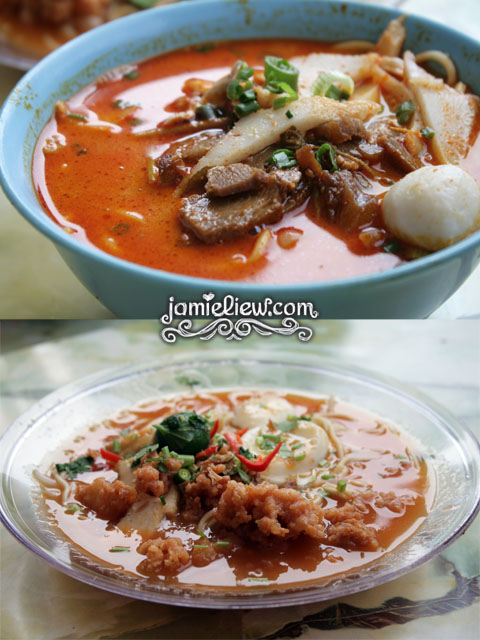 I overnighted at Teluk Intan and of course, we must eat something famous there. and they brought us to the most famous Curry Mee and Indian Mee store there! maybe it’s the company but that was one good breakfast. and we all spent their first wedded day together! (feeling honoured) 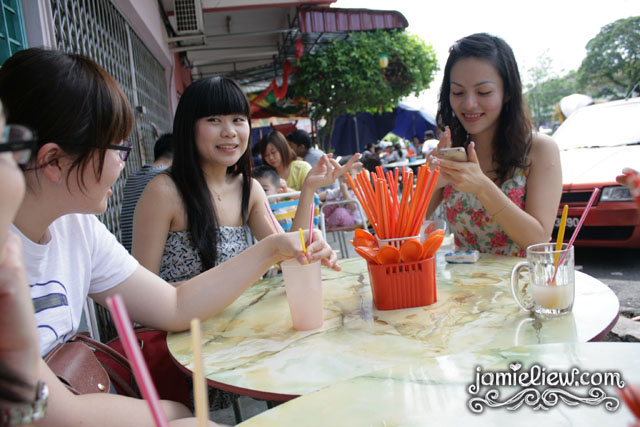 Wendy is from Hong Kong and we both have so much in common. one night and 3 hours bus ride wasn’t even enough for us to talk about everything. sometimes I secretly think that my ancestors are related to Hong Kong people because when I was there it felt really like home. hahahaha. and isn’t Jane lovely in this picture? ^____^. flushed with love. 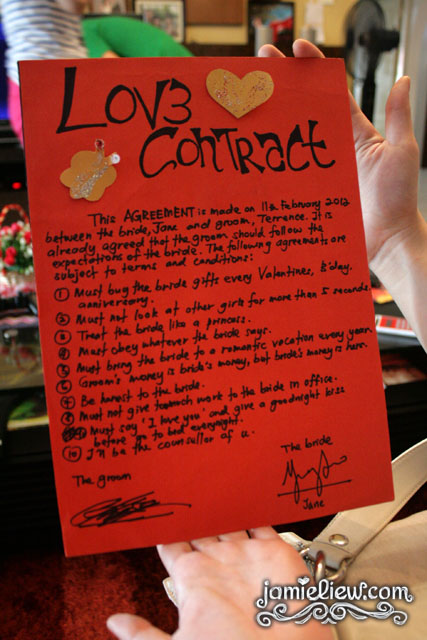 we reached on noon so we did not attend the morning sessions of pranks on the grooms and his “brothers” but here’s a fraction of what they did in the morning! I also saw some videos and pictures from that morning and it was sooooooo fun. they had this game that really cracked me up. the males all having to put on an “angry bird” underwear and there are words written on their asses. something like “bite me”, “kiss me”, “massage me” and “smell me”. the video of the massage me one was the most epic in my opinion. imagine, a manly guy massaging another manly guy’s ass. HAHAHAHAH. 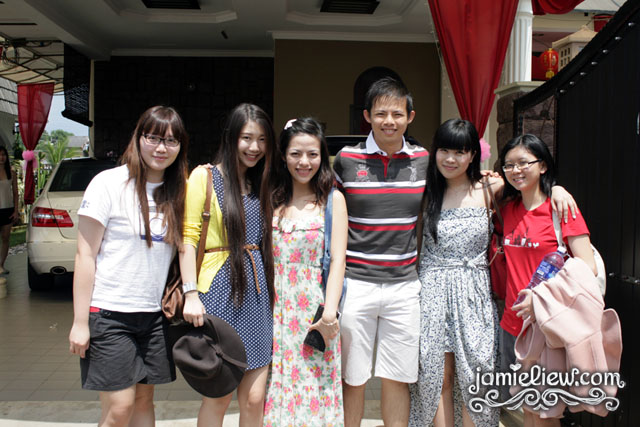 this is so like a family portrait of parents with their 4 daughters. =D.

I really appreciated them for inviting and planning everything from transportation to accomodation for the night. T__________T. I had one of the most wonderful time in my 19 years of life.

thank you for sharing your love story with me and now being a part of such a wonderful event, Terrence and Jane. =).

That was brilliant, I hope both the bride and groom are meant to be, as well as the fact that this is one of the first times that I heard people getting married at a school.

My sister’s getting married around next month, so this is like prep for her wedding. I don’t know how it’s going to be (being near the Drakensburg Mountains and all that), I might blog about it if I can.

It’s true however when you say that true love outweighs all obstacles.

Marriage is quite magical, I’ve been to a wedding before (My cousin’s) and I know the experience. It’s times like this that make me excited for my sister’s coming soon.

wow niceee! first met on wedding day after u all known for so long!
btw the love contract is awesome!

Wow… you have really long hair. How you manage to keep them looking so healthy?