it’s quite known that I can take spicy stuff and probably the only thing I would be proud of myself at.

so as usual I was bragging about my ability on eating spicy food when my friend raised a brow and said “YOU’LL NOT BE ABLE TO TAKE THAT TAIWAN SAUSAGE NEAR MY HOUSE”.

we made a bet that if I can finish everything without drinking any water (to make it more difficult, I cannot take even a sip of water for 10 minutes after completing it). he told me how bad it was and that usually a normal person would finish 2 glasses of water after two bites and that he literally cried the first time he had it. I was so looking forward to it and I decided to film my progress to see if I would cry, sweat, choke or anything since it’s so spicy. 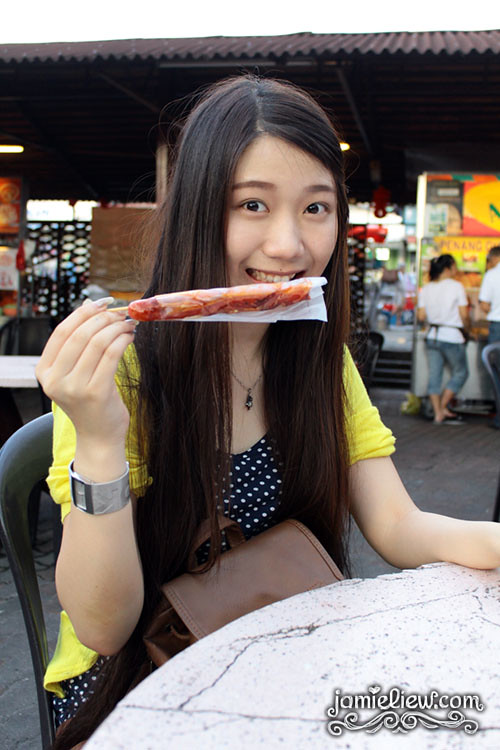 so it is not the average Taiwan sausage you’d find in pasar malam. the other one I had that was really spicy was from Connaught pasar malam which was filled with chilli flakes. but that was alright for me as well. this one, it was filled with chilli flakes AND THEN coated with a layer of thick chilli oil. initially when I first heard about it I was like “bah. that’s a piece of cake.” but when you just pick up that plastic with your hands and then later smell your fingers.. you’d feel it. so do NOT rub your eyes after touching the plastic. try not to touch your face too.

I thought I was going to lose my bet because I was pretty heaty that day and when you’re heaty everything seems to taste spicier than usual. but voila! I still managed to finish it without a drop of water. 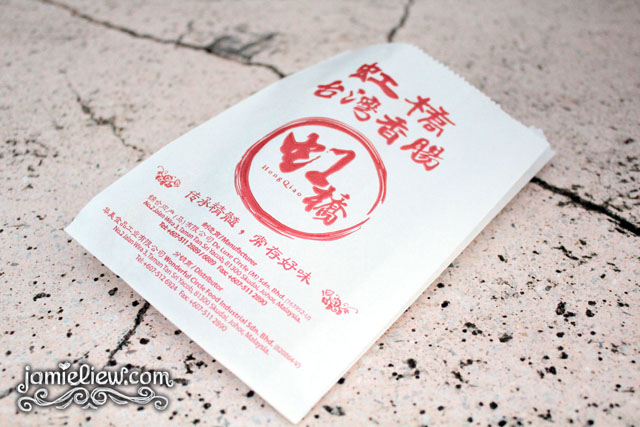 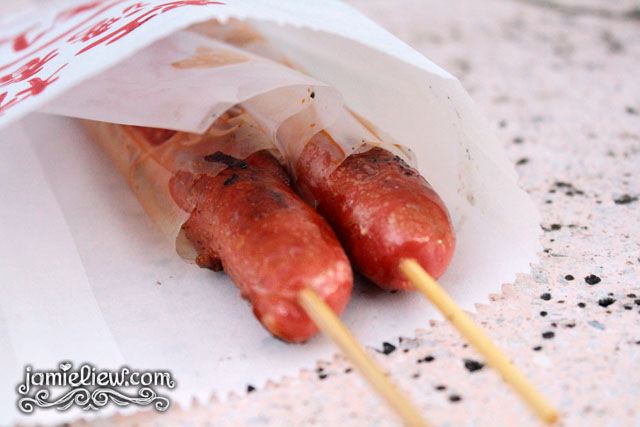 here’s some of the after-sausage pictures. 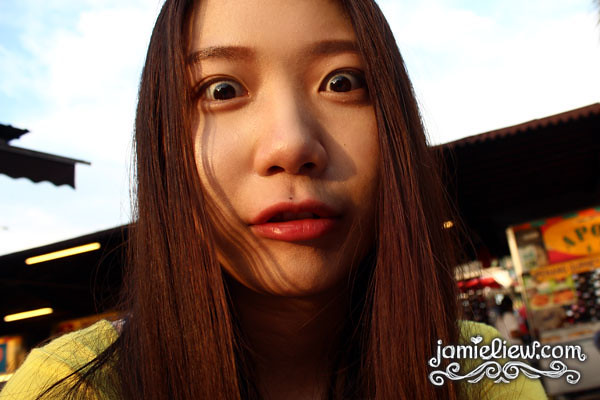 look at my red plump lips mm so kissable *pukes* and my eyes screwed everything didn’t it? ahahha I was tearing already. 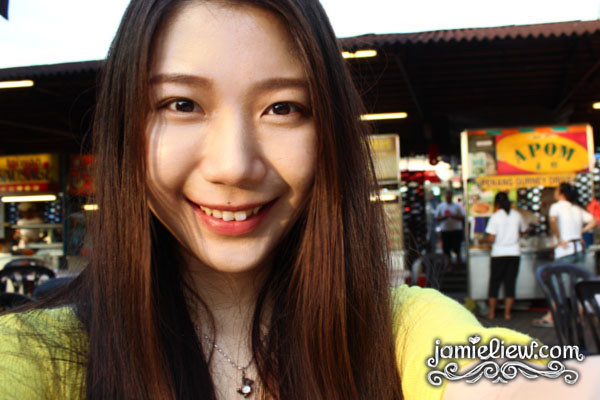 it costs RM2.50 (its written RM2 on the stall though. maybe the most spiciest one costs more =S) for one and it’s oh-so-delicious. worth a try. unless you can’t take spiciness at ALL. 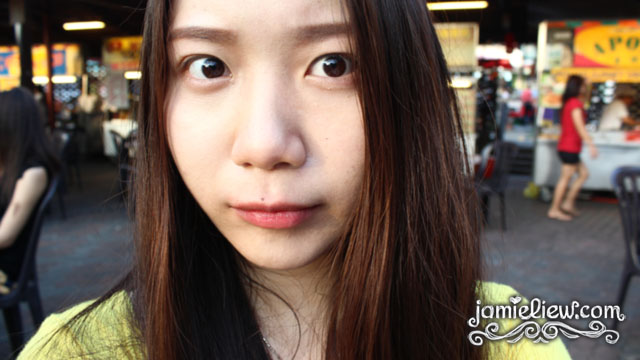 I didn’t want to say anything at the end of the video initially because I was trying to manage my tears. hahahah. and sorry for speaking Manglish. it’s just our culture hehehehehhee.

I forgot to include that scene where my friend said “it’s like watching you get tortured” right before I eat it hahahah. 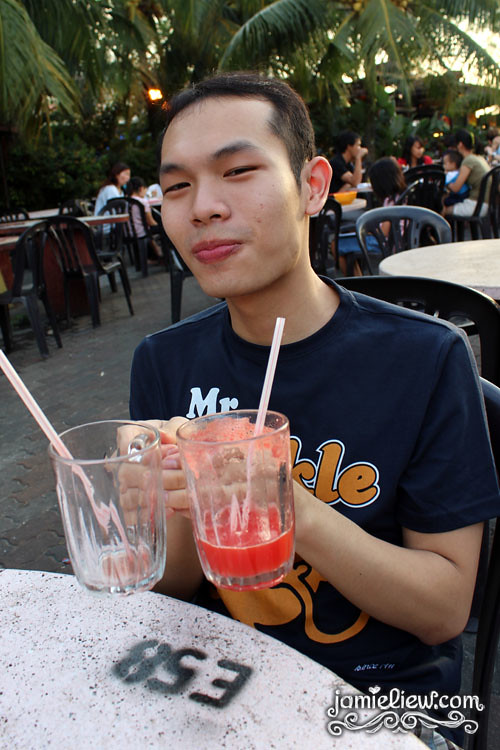 the awesome Wai Kit ate the same sausage as me and he drank alllll his watermelon juice and ate all his ice before he finished his sausage and continued drinking mine and finishing my ice HAHAHAHA. I only had two sips pfft. but the key to feeling better is not drinking anything at all in my opinion. the hot sensation wore off real quickly without water =D.

and as for the poor Wai Kit, the more he drink, the spicier it felt. whatever it is, I WON THE BET! he unconsciously helped me by asking me not to drink water for the next 10 minutes. haha! 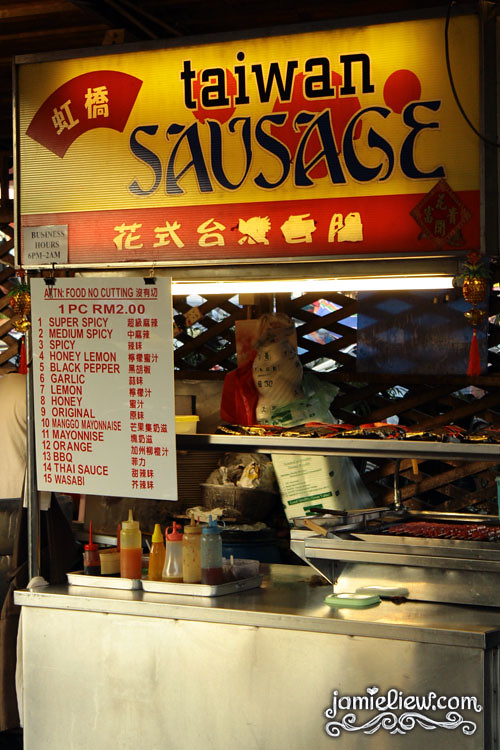 there are plenty of flavours to choose from and you just feel like trying all 15 of it. heck, how would mango mayo and wasabi taste like?!

Hahaha this is interesting.

Wow, that’s some pretty spicy stuff. I’m a huge fan of hot and spicy stuff (my dad too.) and I think this’ll be an awesome challenge for us.

That is one spicy hotdog…I live spicy stuff but I don’t know if I can tolerate that level of spiciness. Btw, have you tasted the Korean gochu? I was tricked into eating one and I was so afraid because I thought it was going to be super spicy but dun! dun! dun! it was sweet. haha! it was just like eating a leafy vegetable. The super green color definitely got me fooled. Even our local pepper was more spicy than that one.

That looks delicious, but I just don’t know if I could handle it! But now I’m super hungry, and have nothing really delicious to eat…

Hello from America, by the way! I love your site (you are SO pretty), and have been reading through your archives. Hope that doesn’t make me super creepy, haha ummm… 😀