even if you’re not planning to visit Korea anytime soon, I suggest you to read this post because it’s interesting like that! it was a little bit of a culture shock actually.

there is no direction needed to get you to Myeongdong because it’s just so popular, nobody would get lost going to this place. after getting off Myeongdong station, you’ll find your way. but you might get lost if you wanna find the same shop twice. 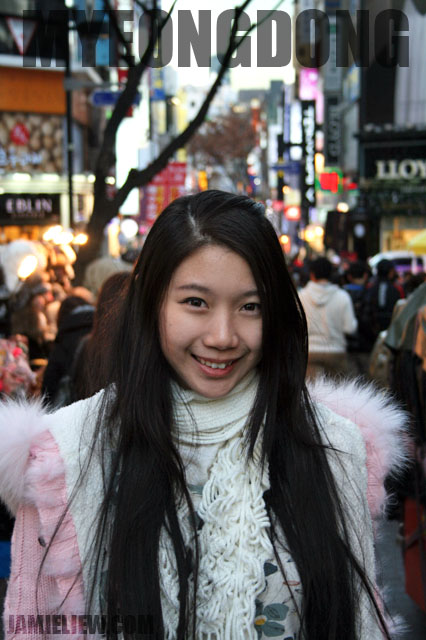 since I lived in Myeongdong at that time, I come here EVERYDAY. it’s fun because there are a lot of stalls at night selling things at a reasonable price. there was this shop selling super adorable socks. regret for not taking pictures of that stalls. and their socks begins from as low as 1,000won! 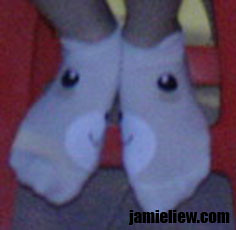 my cute bear socks! wore it once hahaha. cute ain’t it? it has ears too! 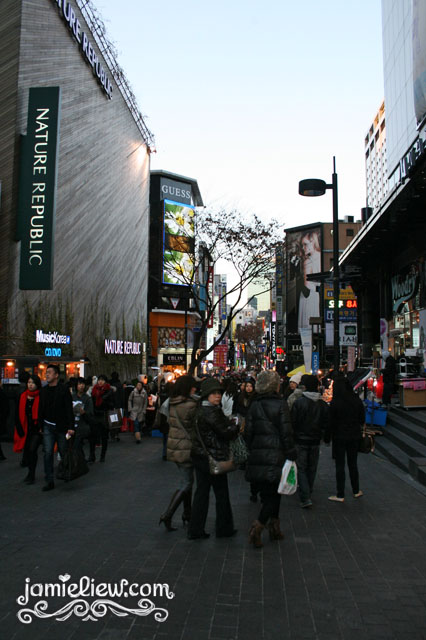 the typical view of Myeongdong. 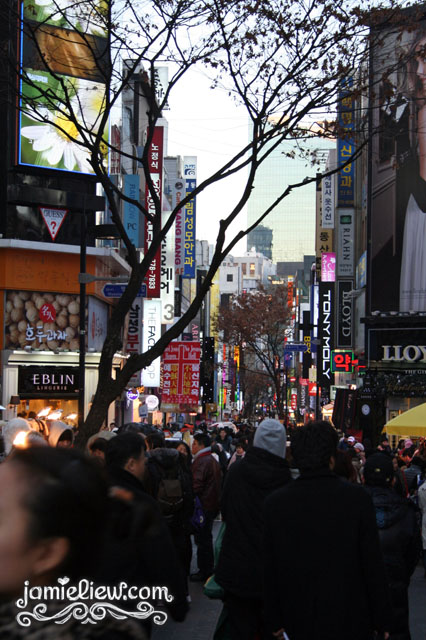 this place kind of reminds me of Hong Kong. and I am shocked to find that the lanes are actually not THAT wide. it seemed so wide in the drama “You’re Beautiful” haha. but it is indeed crowded and filled with tourists. 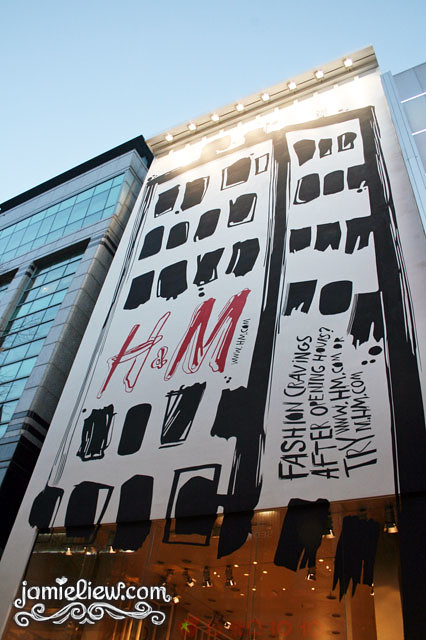 Korean designers are amazing. all the way to the glass! 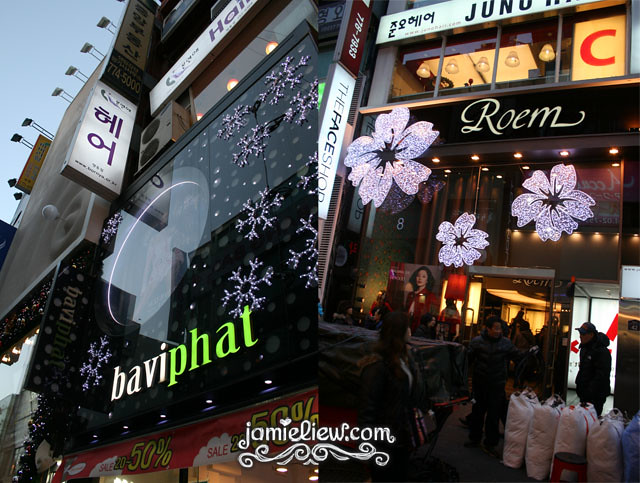 the night before me and my mom marveled around Myeongdong when all shops were closed. so what’s there to see when all the shops are closed? well, they spend the whole night decorating their shops with christmas decos! 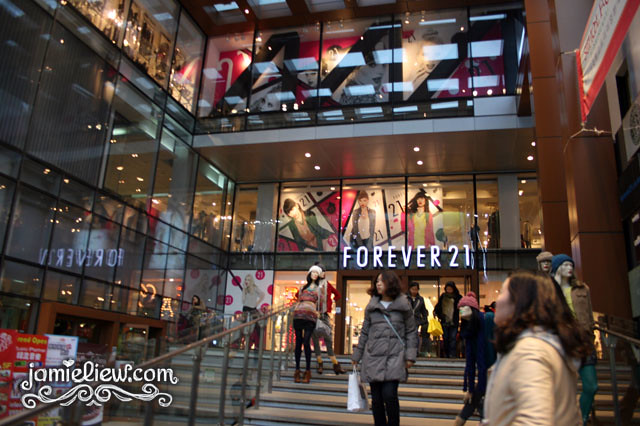 if you like Forever 21, this will be your heaven. never seen such a huge Forever 21 before. and their sale is madness. something like.. buy 1 free 1? 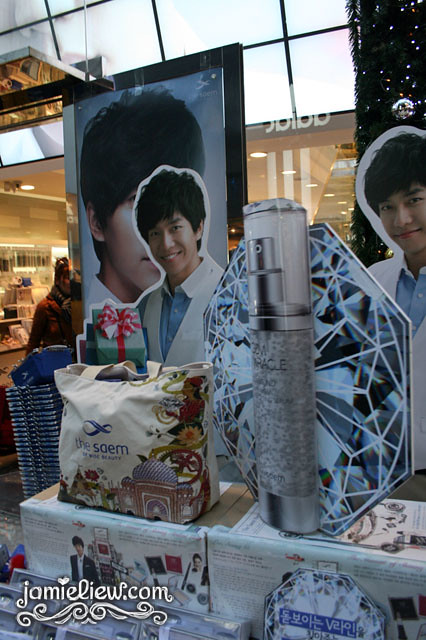 I have to salute to their marketing strategies because they do not only have a good packaging and a handsome artist as their ambassador.. they make beautiful bags, limited stuff, make up as gifts if you buy products from their shop. tempting you like mad. vert smart. 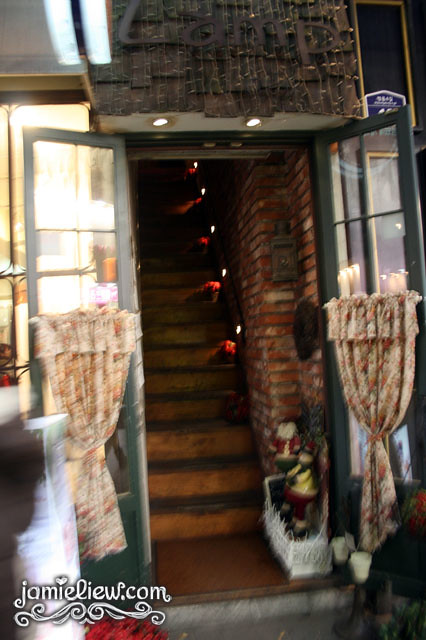 entrance to a casual cafe. so pretty yet so common in Seoul. I’ve always told my sister that if we were to take the most stylish cafe/restaurant to Korea, it would probably just be a normal looking one there. 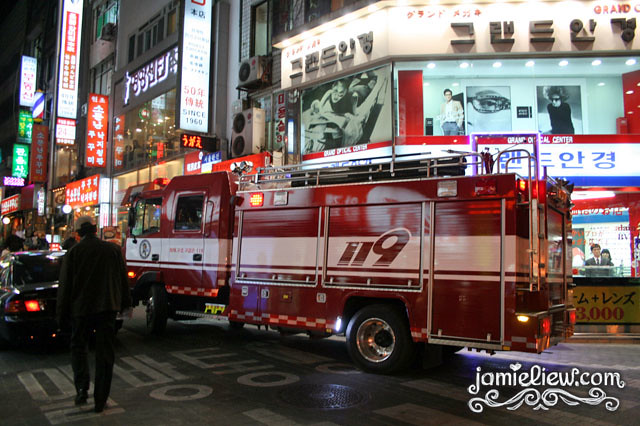 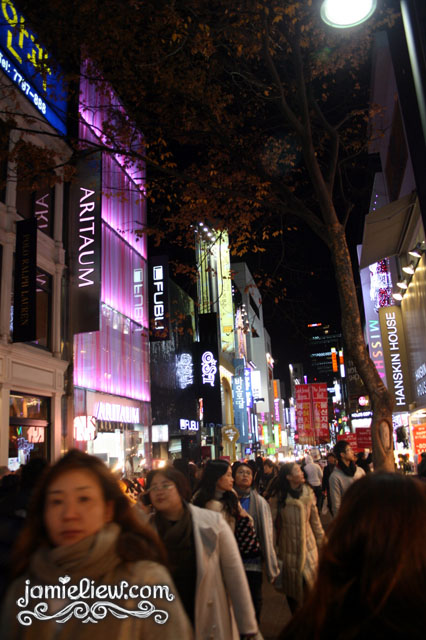 just another casual picture of Myeongdong at night.. wait what?

didn’t we see that red banner in the picture earlier too? 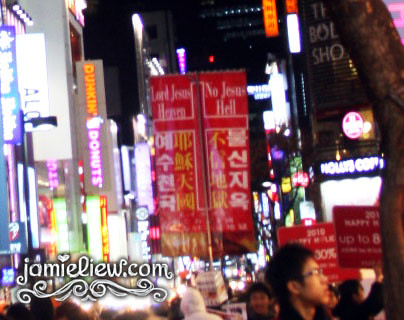 and that’s a picture of fire below those words.

it was really loud and that guy was literally shouting on his microphone saying LORD JESUS HEAVEN, NO JESUS HELL. maybe security was chasing them, they moved really fast. it felt something like a demostration. except it wasn’t political. it was really quite offensive.

yes, I was offended. they did it in public and they DO NOT respect other religions. no offense to Christians, but this is just wrong. to my surprise, Natalie told me these are not unusual and they often speak out their thoughts and does all kind of demonstrations in Myeongdong. D=. basically, Myeongdong is a popular place for demonstrations.

pictures below taken with my mom’s Sony which is now gone T_T. 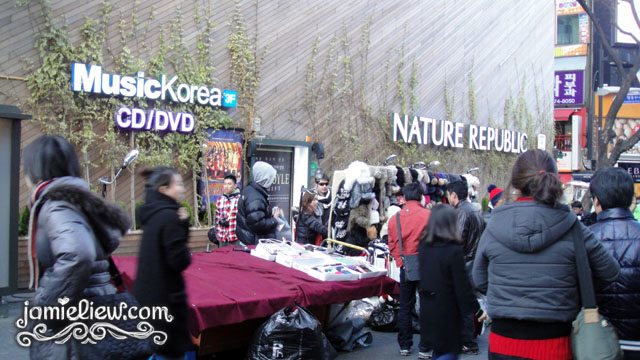 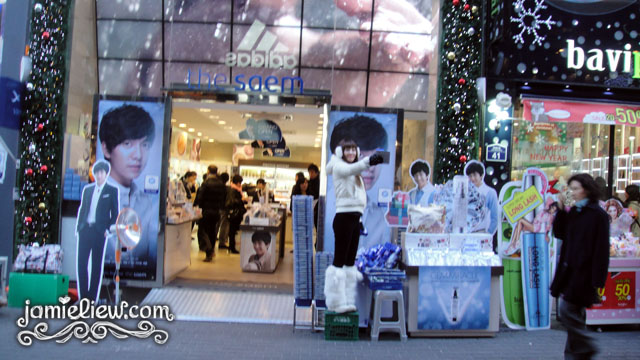 if you’re a foreigner and you forgot to bring cotton. no worries. they give free boxes of cotton. you don’t even have to buy anything. all you need to do is take a strool in their shop. but as usual, their stuff are just too attractive to not buy T_T. well at least you get a free box of cotton with cheap products =D.

the price of Korean beauty products in Korea are around 40-50% cheaper than the ones sold here! 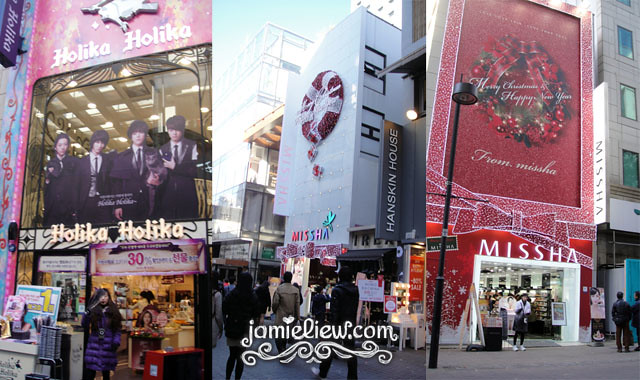 Holika Holika branded by CN Blue, Mishha, and another Missha. Missha have awesome eyebrow pencils. they only cost 2,000won. they are selling the same thing here for RM18 I think. for what you can get for RM6 in Korea! 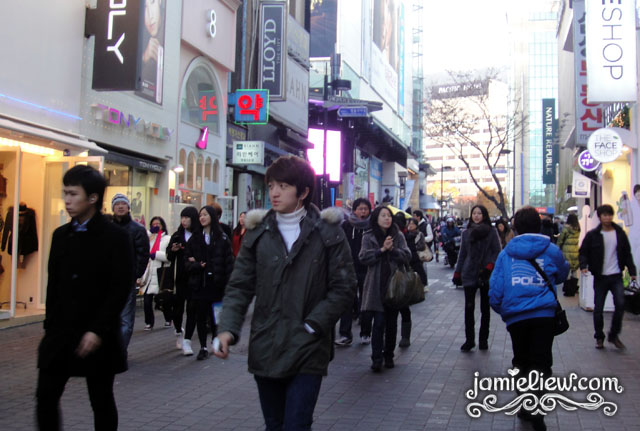 she told me she took this picture just to show me that handsome Korean guy which she thought was SUPERRRR handsome. okaaaaaaaaaaaay lah. hahahahahaha. 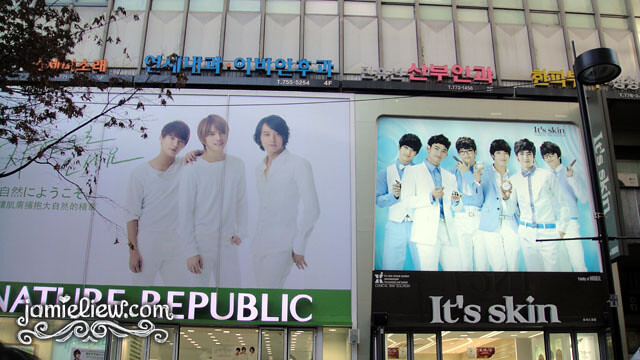 all I see is JYJ and 2PM! didn’t go into the store because their pictures are huger outside. HAHAHAHHA. 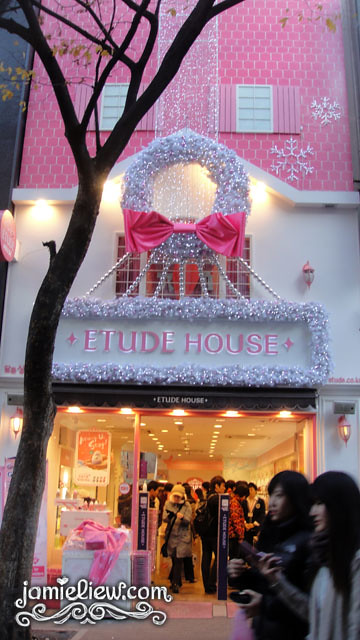 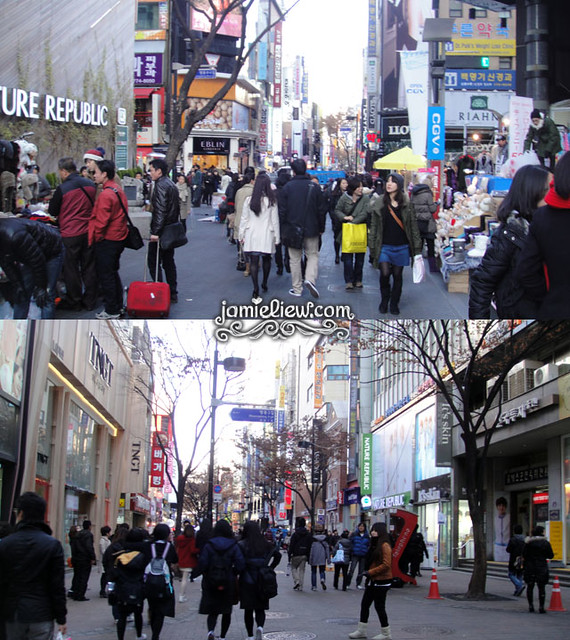 just so you know, the main street is long, beautiful and all.. but then.. 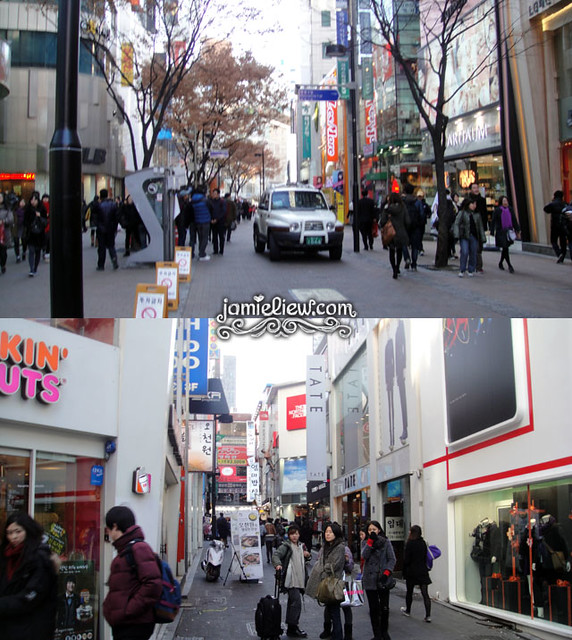 the more interesting/cheaper stuff are all in the smaller lanes. and there’s where you’d never get to find the same shop twice. it’s a maze. A MAZE!

saying this because I found an awesome stationery shop (two side by side! awesomeness) the first time I was in Myeongdong and I wanted to get more stationeries before I leave. I was looking for it for about 2 FRIGGIN’ HOURS! and in the end, I still couldn’t find it. RAWR!

that stationery shop sells things like keyboards, hair accessories to loads of things you don’t need before you see it. teehee. =3.

was it Artbox? Hahaha! They have two stationary shops near each other that eels awesome stuff that I aways go to 😉

Nice place…. It’s kind of Shibuya and Akihabara in Tokyo maybe… Croudy, so many stores and so many people and tourist…. And yeah it’s also like Hong-Kong…. I should visit there somedays….And by the way: Nice socks, do they do the same for Adults LOL???

It was really a very happening town ! I’ve been there last month , and I suffocated cause, the crowd was seriously, being toooo packed!

If I’m in Seoul, I might be broke in a split seconds LOL!

I’ve been thinking OVER AND OVER AGAIN when I should go there. My main concern now is how much money should I bring as I will be on a budget vacay. I really need ur advice…

I think I should hv no prob about walking around aimlessly since I can read hangul, its just that I can’t understand the meaning of the .. Hahaha

Let just say for a 4 nights stay in Seoul how much u suggest I should bring?? xoxo

Seriously?! Geez i tot its gonna be like RM5000 per person. 500000won is damn cheap. I will take ur advice about extending my stay… hehehe… maybe i can make my owh ‘winter sonata’ love story in Nami Island. I’ve been craving for their fresh seafood. Oh God, may August come earlier this year (i’ll be going there this august-btw)

Bad new for my husband’s wallet (as if I care LOL). Thank you so much Jamie for ur help! Pls do write more ok!

Wow! That would be really fun going the wz u girls =). Pls update us more once ur home okay!

woooww !!
it’s a shopping haven !
I don’t think if I wanna go there it is enough to bring RM5000 including the hotel and a week to stay there .
Lee Seung Gi that handsome actor and also Etude House !
omo~ I can’t wait to go there .

Hi Jamie, I was looking at MyeongDong map and it seems to be quite a big area with many complicated small streets. As I don’t think I will have enough time to explore the whole area, is there any main street to shop at or will you recommend any must-go-streets for a first-timer there? thanx =)

btw I’m heading to Seoul by beginning of November. Do you know how is the weather there by November? I check that it’s still consider as Autumn in November but I’m still worry that it will be as cold as winter (I’ve only experienced winter in Australia before), and as a Malaysian I’m too used to the forever warm weather here hehe.

I’m planning to go there on the first week of October 2013 for around 6 days. How many coats/jackets/parkas should I bring? Or is it even necessary to bring those outer layers since it’s only the beginning of autumn?

Hi, i will be travelling to seoul this coming Nov. End of Nov actually, staying in Myeong dong. Hows the weather there? Will Nami Island be covered in snow yet??