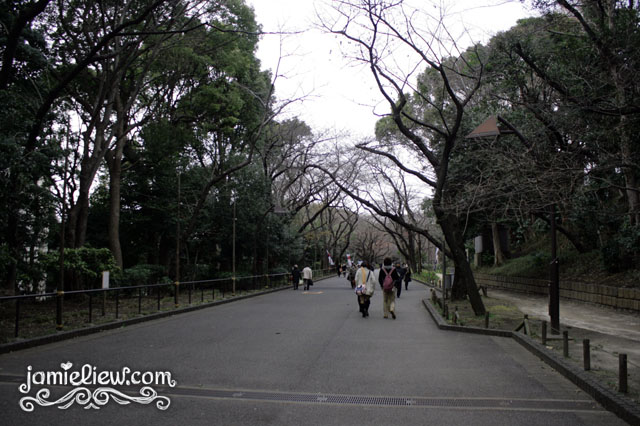 this place can be easily seen through google. just one click and millions of photographs of the beautiful fully bloom sakura view will be viewable. but it was pretty sad that when I was there, there wasn’t any. =(. I am not sure about this but I felt that sakura’s bloom at a different time sometimes. like the ones at DisneySea, they were fully bloom! even at such a cold weather. and even some in Kamakura. so I guess it really depends on the location? but as for Ueno, it comes early April. to be safe, travel a little before mid April since the sakura flowers will 0nly last for 2 weeks. 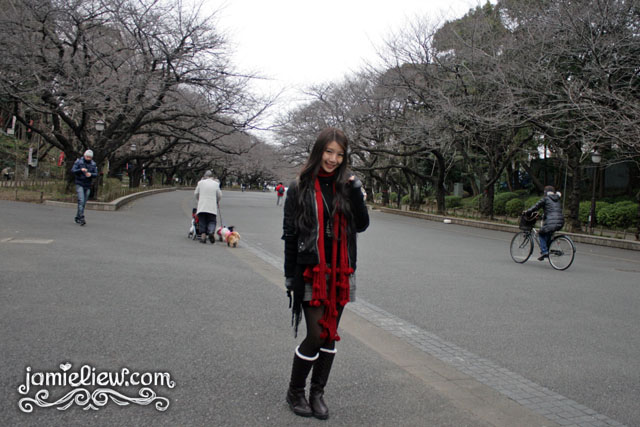 another picture which requires your brain to visualise how light pink flowers are filled on every tree behind me. hehehe. and during winter it looks so gloomy. gosh winter is such a gloomy season!

so if you think you’re not the type that likes to take strolls in a park, you may skip this place. but one thing I know for sure, is that there are beautiful temples here. 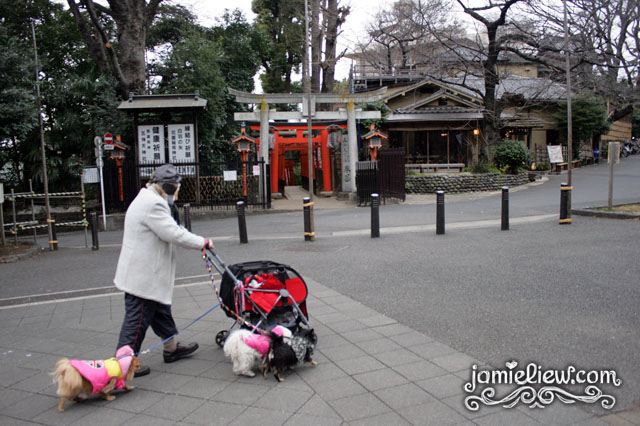 I saw this and immediately pulled my mom over. not the cute dogs. btw that’s a very old grandma walking 3 dogs with a baby. Japanese (old) people, forever so healthy!

anyway! I was talking about what could be found in Kyoto, those red thrunks behind. eventhough the ones in Kyoto is clearly more attractive, but this one’s not bad! 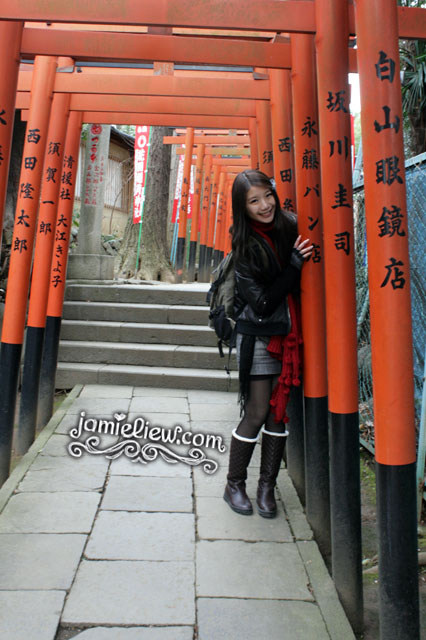 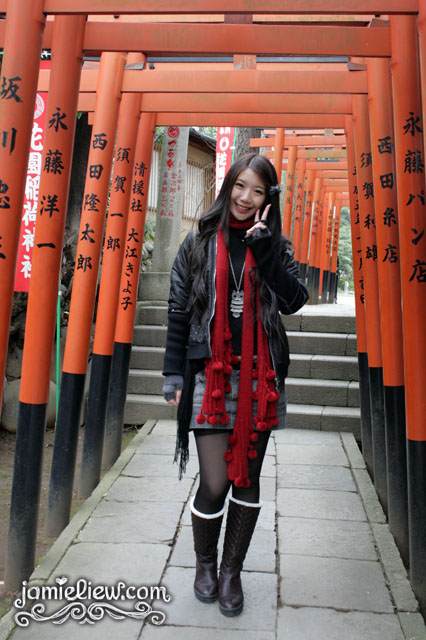 I don’t know what to call these.. pillars? but as far as I know the huge ones are called gates haha. so erm mini gates??

okay googled and I am right! #likeaboss. they ARE called gates! and mom said they are called Torii.

if I ever get to get married, I want to have my wedding photos photographed at the Kyoto one. PFFT. 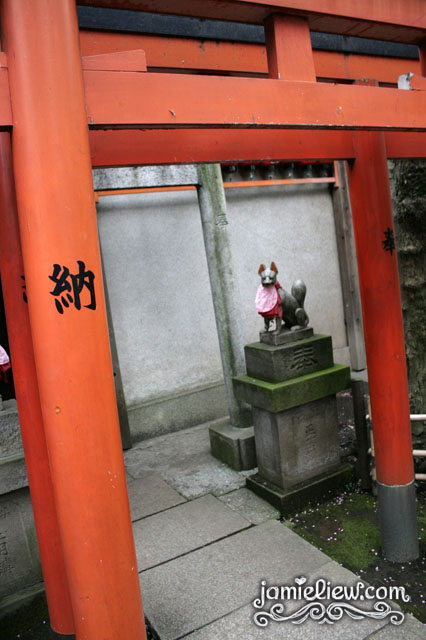 you know you saw it. that’s a fox over there. (with a napkin? HUH?) and it’s absolutely not a rumour that people worship foxes in asia. 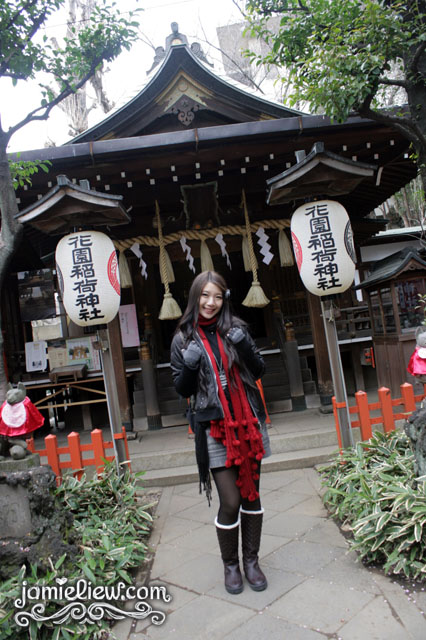 this is the fox temple. which I stupidly thought it was a dog temple pfft mainly because I think dogs are the most awesome animal.

I am not sure about Japan, but in Taiwan and China, they worship foxes for love luck. like maybe praying for their other half to be faithful to them or perhaps just getting the other half. 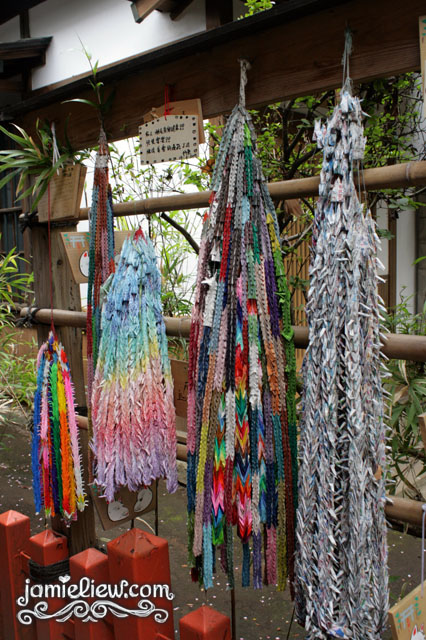 I don’t know what are these but I bet people put them up for luck. =D. whatever it is. it’s beautiful. wondering if it would mean like tails for the fox hmm. 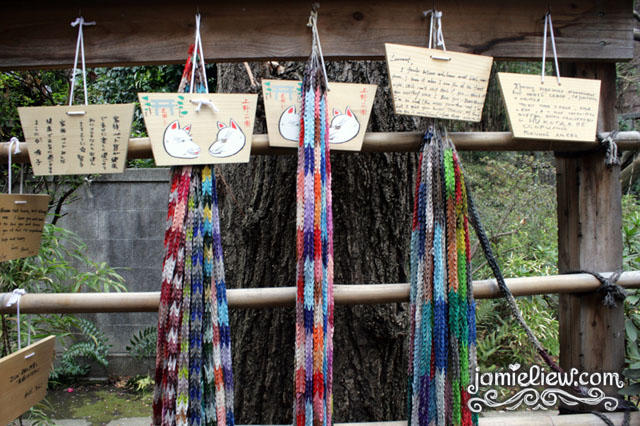 they even have pretty drawings on it! gosh these Japanese people! and it was there where I realised how pretty Japanese words are. the neat handwriting of the Japanese people written on the wooden plates. 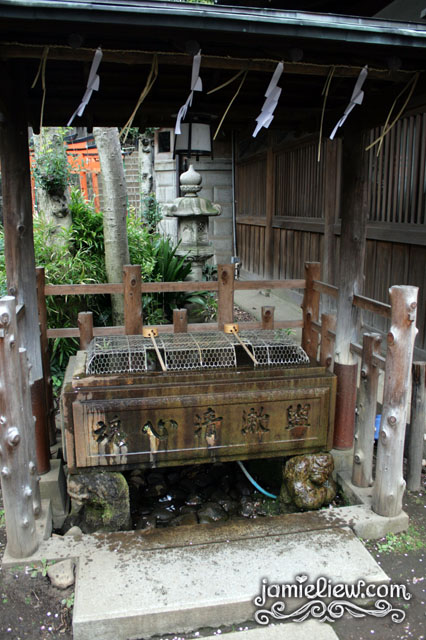 holy water! it is seriously drinkable. I drank once at a.. well, a place that has much more people drinking it so I tried. it tasted like mountain water. very pure. best thing was, IT WAS COLD! =3. 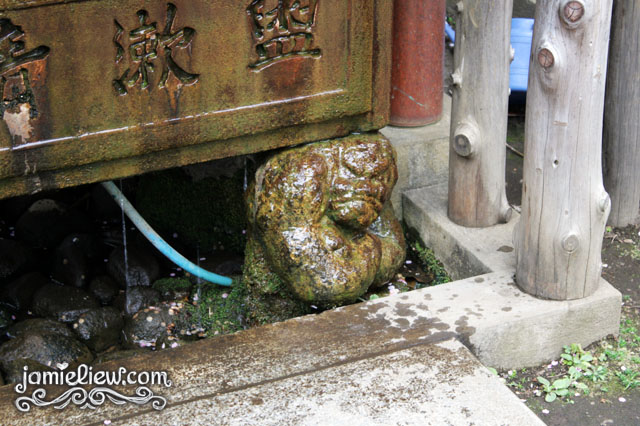 I bet no one actually noticed the foot of the basin. looks like it’s folding his arms angrily but I still couldn’t guess what it is. the protector perhaps? 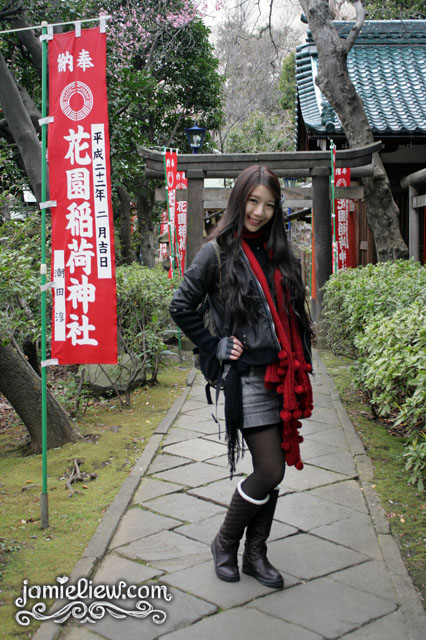 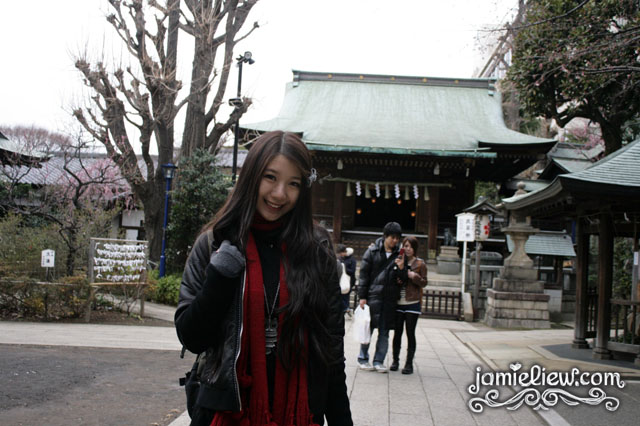 the surroundings of the fox temple. and this is a different one! they have so many sometimes I wish I understand Japanese to explain more. =S. 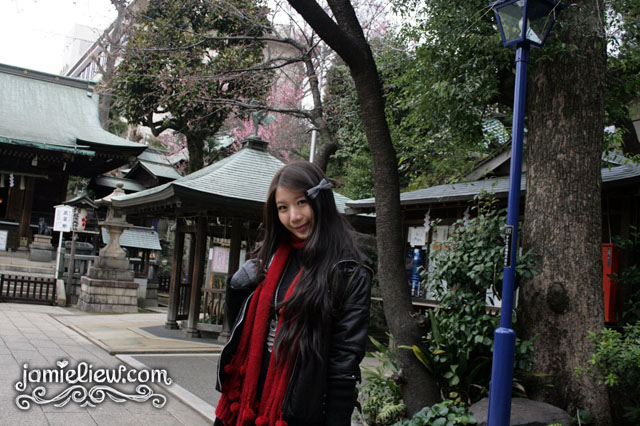 can you see those cherry blossoms behind me?! 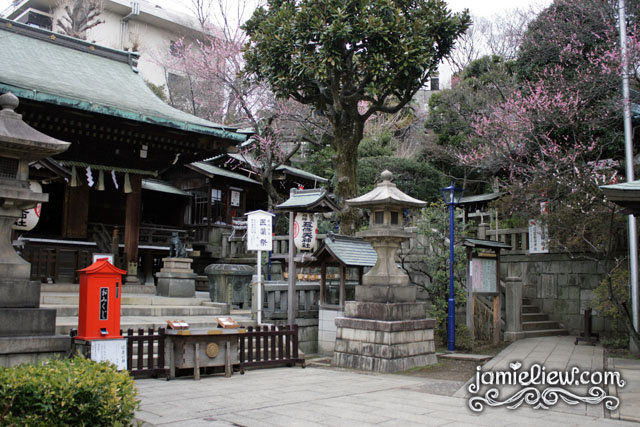 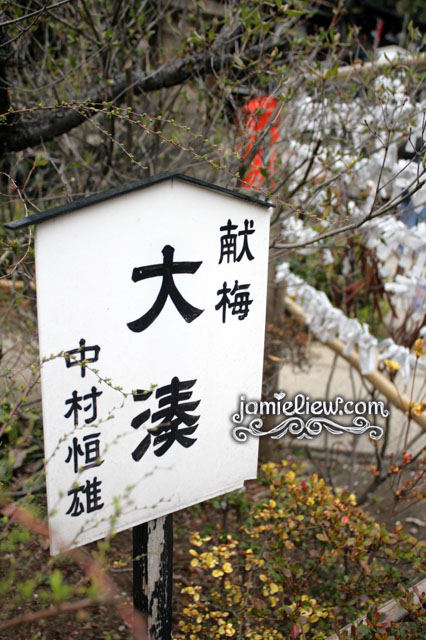 the place for people to hang what they got from their prayers! 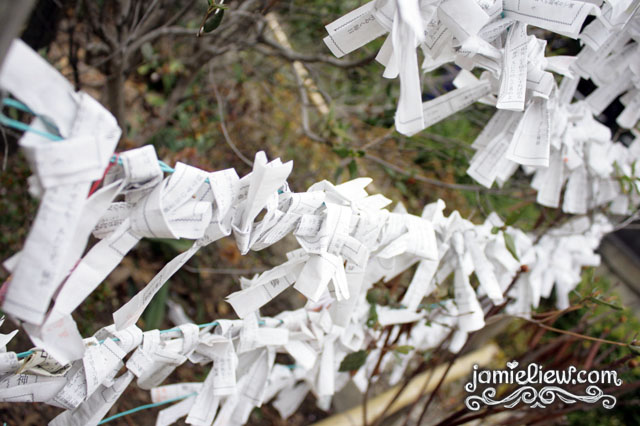 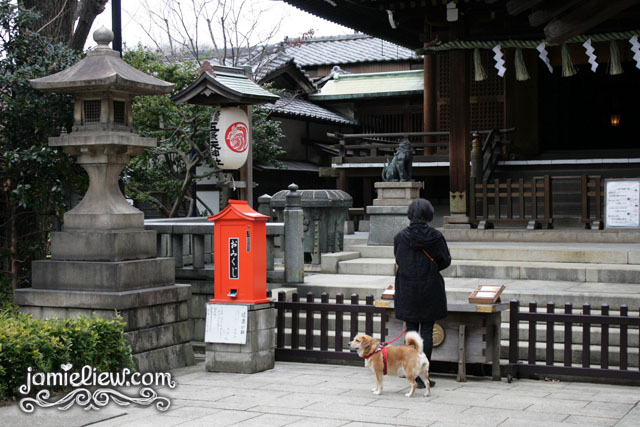 I like how dogs are so obedient while their owner is doing something serious pfft. is it me or do I think that this dog is more lovable and adorable than the puss in boots cat. =D. 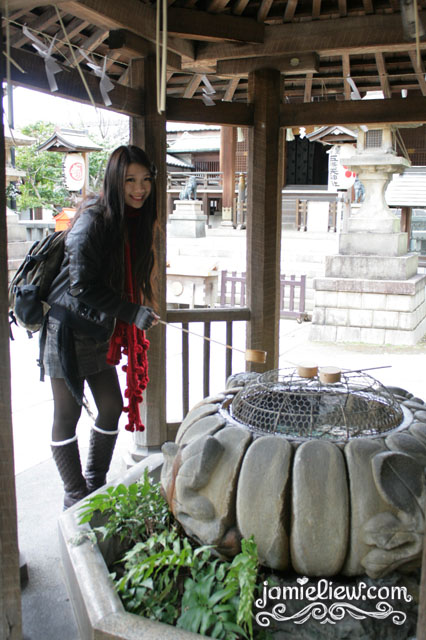 another place to drink holy water! =D. actually I guess it’s more for washing our face and hands. the ratio of people who actually drinks it is probably 1:20 *coughs* usually men.

and after exiting Ueno Park. me and my mom just kept walking. we didn’t know where we were heading to but we are pretty sure we’ll eventually find our way back. until we saw ANOTHER beautiful temple! 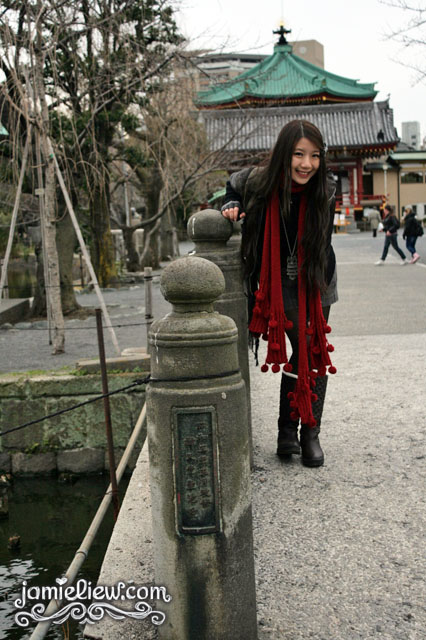 this one has its own beauty because it is in the middle of a lake. 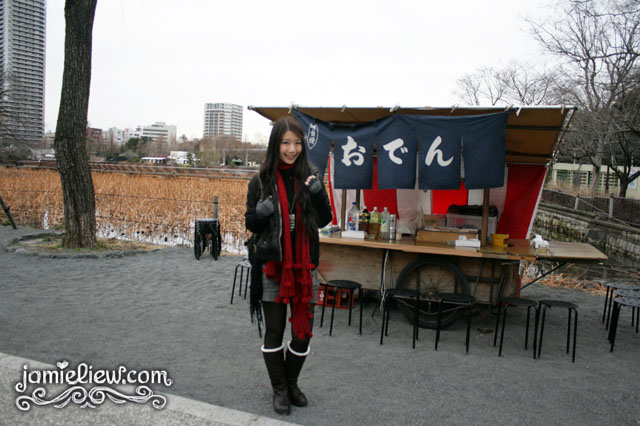 that stall behind me is what I expect Japan to have when I first stepped on Japanese soil. and THERE IT WAS! it’s pretty rare in Tokyo but don’t it remind you of NARUTO?! or perhaps other Animes? =3.

I’m not sure if it’s a good thing but the lake is more attractive than the temple. HAHAHA. 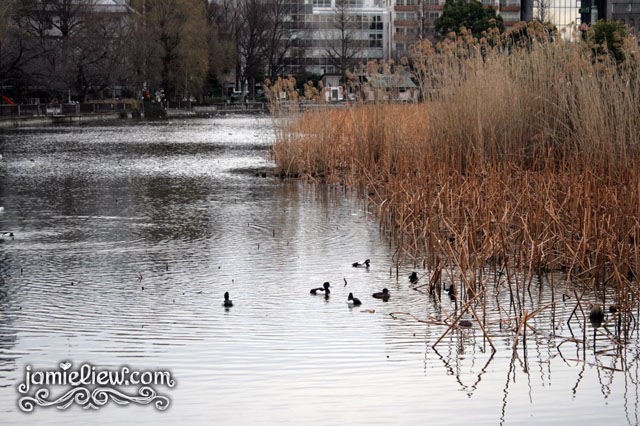 because there are plenty of ducks on it. =3. 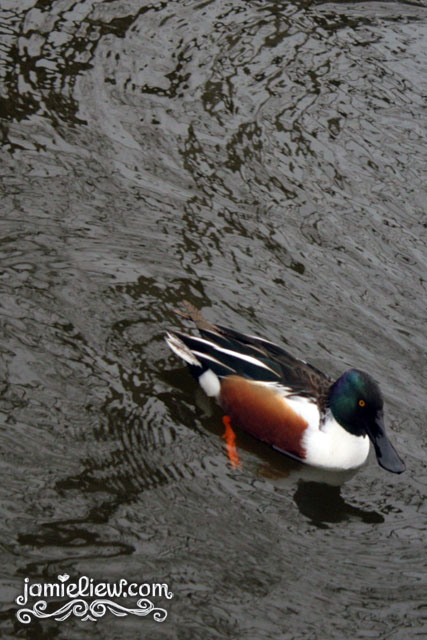 the ducks are damn pretty alright?! except all the ducks there seriously have scary eyes pfft. did you even notice that different types of ducks don’t only vary in size and colours, but EYES TOO? maybe these are the angmoh ducks or something with different colour iris. wth. 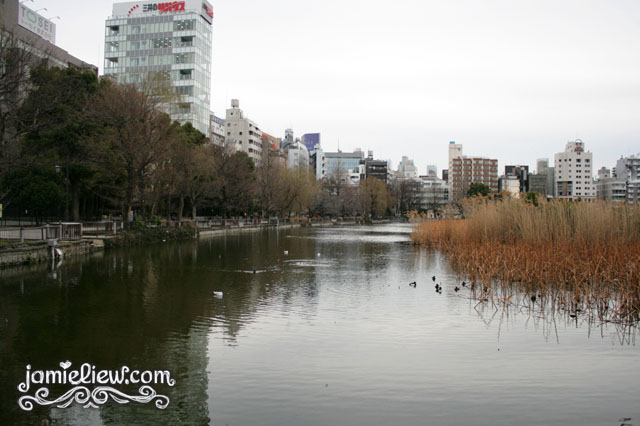 Winter view. I am positive I’d love Japan even more in Autumn. 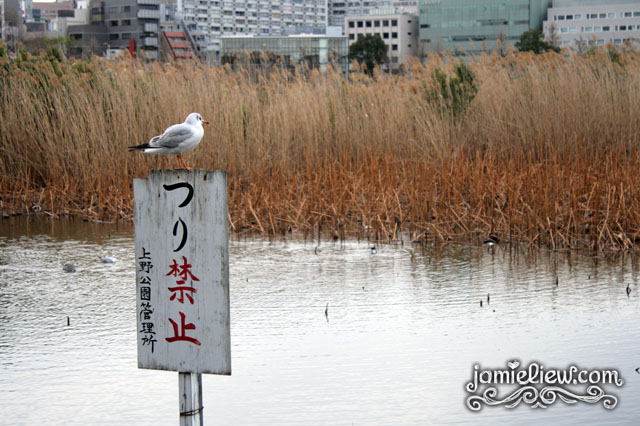 did you know, most birds in Japan are fat? I guess they are not exactly REALLY FAT. but it’s maybe because they have thicker feathers. =P.

and because this was the last day of my trip, my mom was very exhausted for sleeping for merely 6 hours a day. so she went back to the hotel to rest and I went to Ikebukuro(again) for more shopping! I couldn’t get enough of Cold Stone too. BANANA CARAMEL! and if you visit Shinjuku please try Mr Donut. eventhough there’s a shop here in 1Utama, IT IS NOT THE SAME. I’m pretty disappointed with the one here =S.

I am sad to tell you but it’s already the end of my Japan posts. *SNIFFF*. until the next time I visit Japan again! but come to think of it, it isn’t so bad because I still have a few things to talk about for Korea. =3. really hope you find the series of post on Japan interesting!