I remember 2 years ago when I was sitting for my major exam, Nuffnang organized the same Blog Awards event in Singapore and I was dreading to go but since SPM is clearly more important, I stayed home. but it is alright, finally, I get to come to #NAPBAS! and this time, it’s even bigger with 500 bloggers; 250 from Malaysia and 250 from all over the region like Singapore, Australia, China, Hong Kong, Japan, Indonesia and the Philiphines!

a small fry like myself (T____T) wouldn’t make it to the nomination but it was such a great event. it wasn’t just about cheering for our favourite blog sites, but instead, it’s a great event for us to meet new people from all over the region! I have a bunch of pictures from the after party but sadly, not in my camera =/. well, it’s alright, so lets focus more on the event.

it’s held at Marriott Hotel @ Putrajaya. and because I am almost illeterate on roads, I had my sister send me to Zouk where Nuffnang kindly rents a shuttle bus for us to get to the venue. 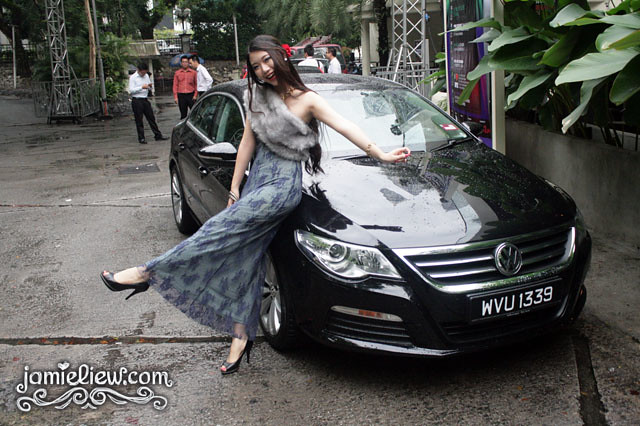 but I on the other hand, was a little special teehee. since Volkswagen is one of the sponsors, they sponsored 4 cars for some of us to be driven in style to Marriott Hotel!

and that’s my Volkswagen Passat! even just for a ride, it’s still awesome. muahahhahaa. 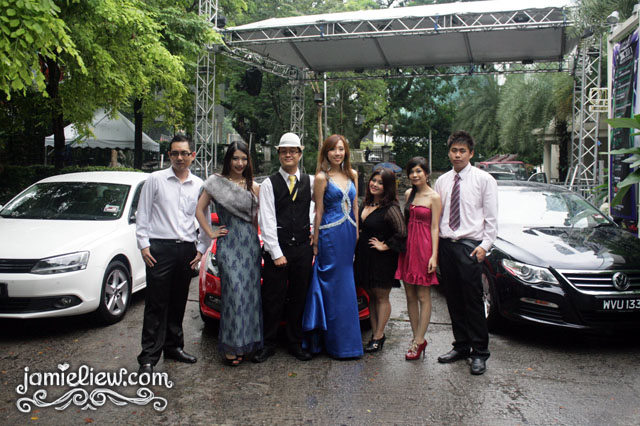 7 of us whom had ridden in style. Isaac, Serge, Cindy (her dress is so pretty, it’s by Carven Ong!), Jess (who took the ride with me!), Ben Dan and Benjamin. 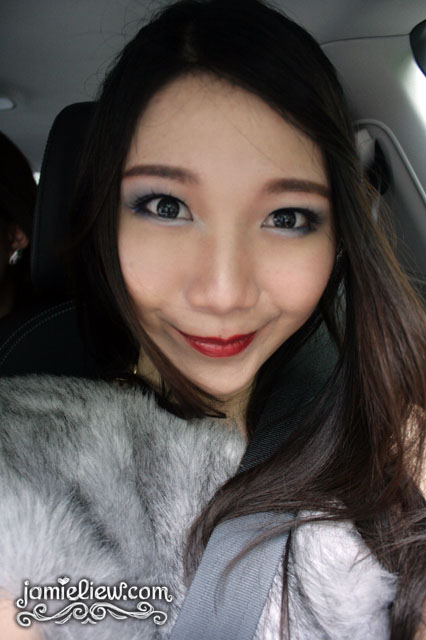 no doe eyes even with contacts. hur. T_T.

why does my eyes have to be the smallest in my family. pfft. do you know how horrible I had to look whenever I take a picture with my sister? U_U. 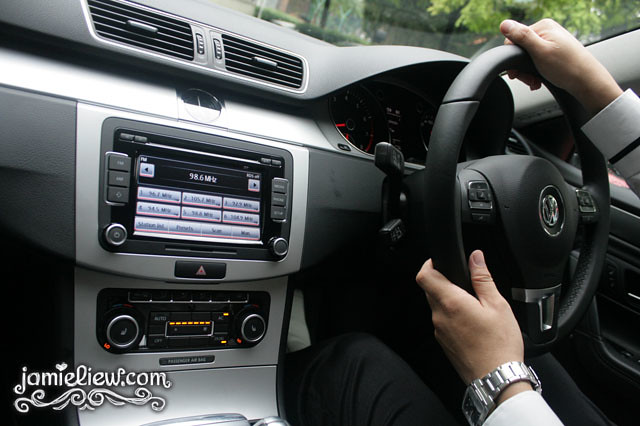 it was such a comfortable ride. not only the outside is classy, the inside is equally as classy. and you can set your own temperature for EACH SIDE. ain’t that cool? moreover, this car picks up very quickly. it was the longest ride. Jess had so much to tell us about and we had a very talkative driver to drive us too! ^^. wait, did I mention I’m very talkative myself? we didn’t have to guess, our car MUST BE THE NOISIEST. 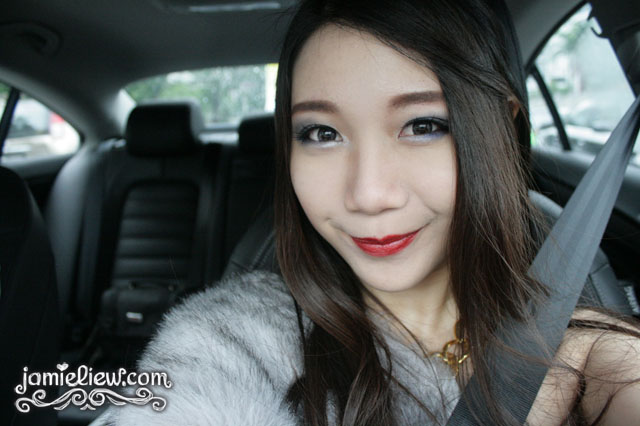 comfortable black leather. and if you’re wondering why the red lipstick which I’ve never put on before, it is because I wanted to achieve the vampire look but which in the end got sabo-ed (expression of being interrupted in a bad way. ahahah) by Ginny calling me a Datin PFFT.

and in about 40minutes, we arrived at our venue at 6pm, an hour before it should actually start. but well, you know, MOST Malaysians are late. but it’s not such a bad thing because I got to catch up with so many other bloggers. I want more events like these. MORE MORE MORE! at least before I leave hahaha. 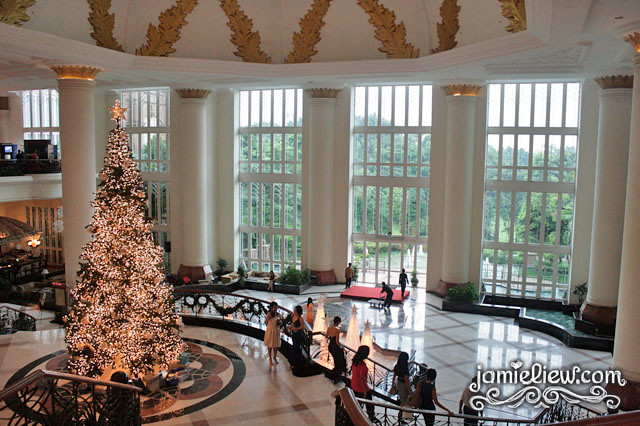 the pretty Christmas Tree. I like it when Chirstmas Trees have heaps of light decoration. but waste electric hahaha. Christmas wastes damn a lot of electric everyone should just light up candles. which in a way, releases CO2. errrrrrr. maybe we should all just use a kinetic torch light pfft.

surprising how these chemistry facts are still not wiped out from my brain. D=. 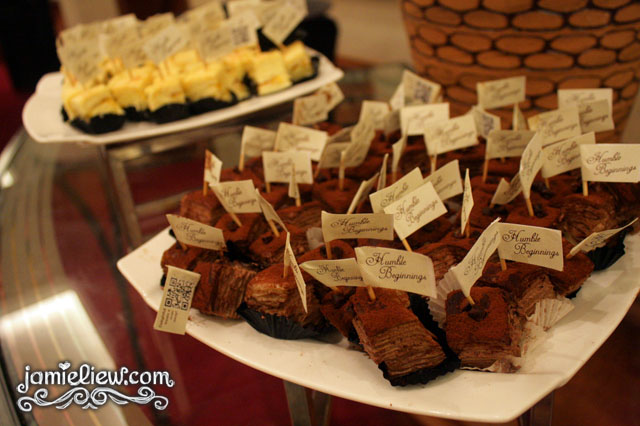 so since we were early, everyone noticed I disappeared for a WHILE while mingling around. and there I was, munching these delectable mile crepes by Humble Beginnings, an online bakery shop. YUMMY! 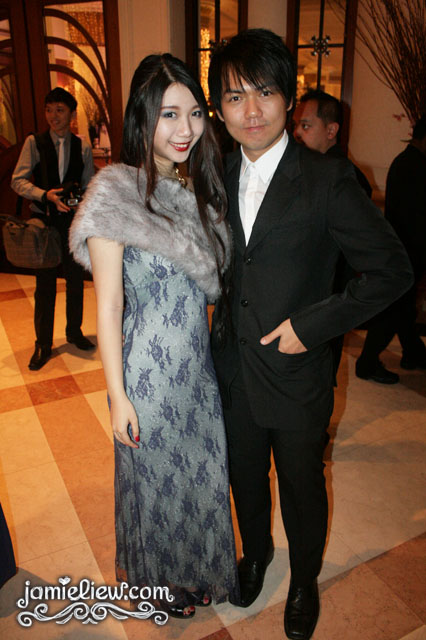 this is handsome Robb. I like to call him handsome because he is. and he’s always fishing for handsome compliments so. HAHAHAHA. =D. but you have to agree that he’s handsome. he was once (more than) twice my weight. unbelievable? believe it. and he wrote how he did it on his blog. <<< find out. it didn’t work out for me because I didn’t have any discipline when it comes to food T_T. 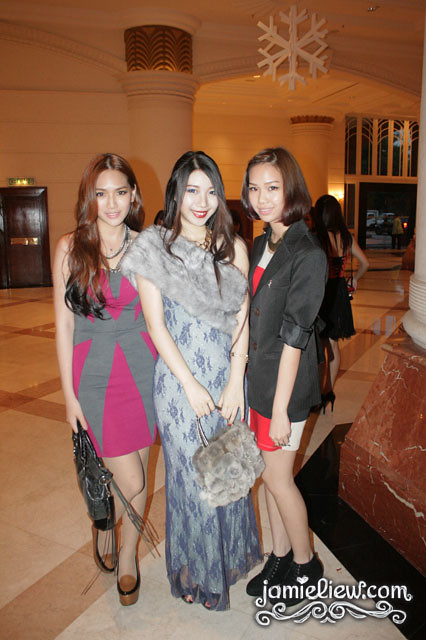 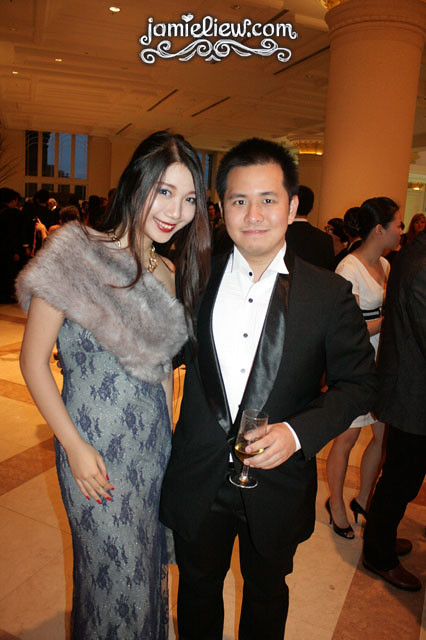 KENNY SIA! who doesn’t know Kenny. if you do not know Kenny then you’re probably not Asian. HAHAHAHA.

I met Kenny for less than 5 times and he remembers my name! he actually makes an effort to remember every single person he met. U_U. *touched*. 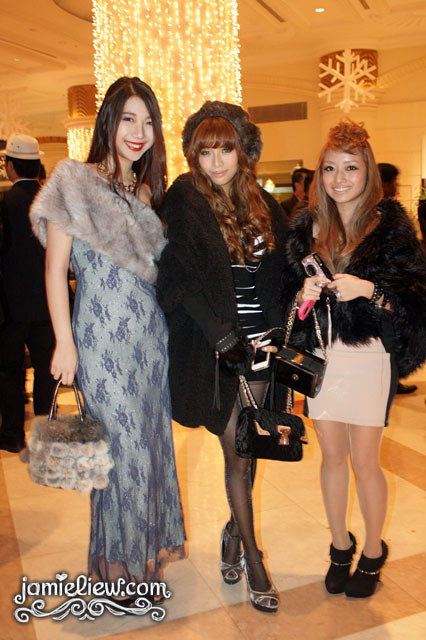 with Ringo and Audrey! if I didn’t know them, I’d think that they’re Japanese girls. Audrey and Timothy is getting married have you heard?! =D. and their 9gag.com way of getting married made it to the front page of 9gag! and you can read about their funny yet romantic way of getting married here on Audrey’s blog! so really, Congratulations to both of them! and also Ringo for winning the Best Fashion Blog! I’ve never actually really spoken to Ringo before this but she’s actually really friendly compared to what I might have imagined how someone very famous would be like =D. 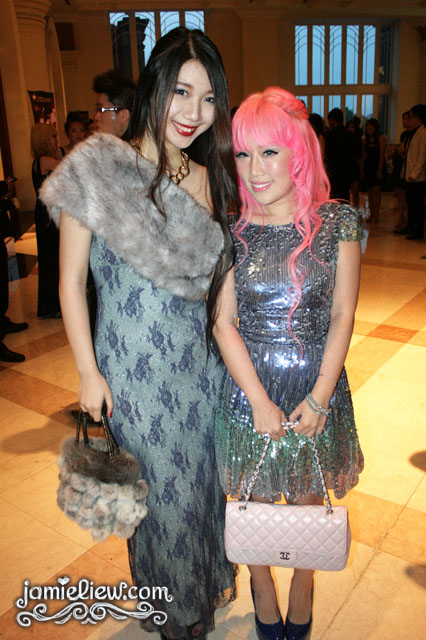 and my favourite blogger of all times (same goes to the hundreds of thousands others who voted for her I guess haha), XIAXUE! if I am not wrong, Wendy should be one of the reason why most bloggers are bloggers today. even I myself was partially influenced by her. I like how she’s so real and isn’t afraid to voice out her own opinions U_U. eventhough I myself is very straight forward, I’d still be reluctant to say it in public. I was so surprised when she didn’t win the best Lifestyle Blog. but she later won the Most Influential Blog Award and also the OVERALL AWARD! in the end, still the BEST blogger! =D. 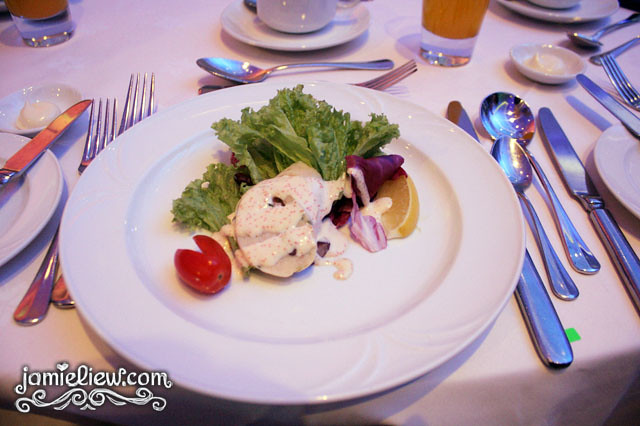 it was a course by course dinner with all the appropriate cutleries provided. I hadn’t actually experienced eating with so many cutleries on the table for a very long time. so I was actually pretty impressed by how Nuffnang set everything up! 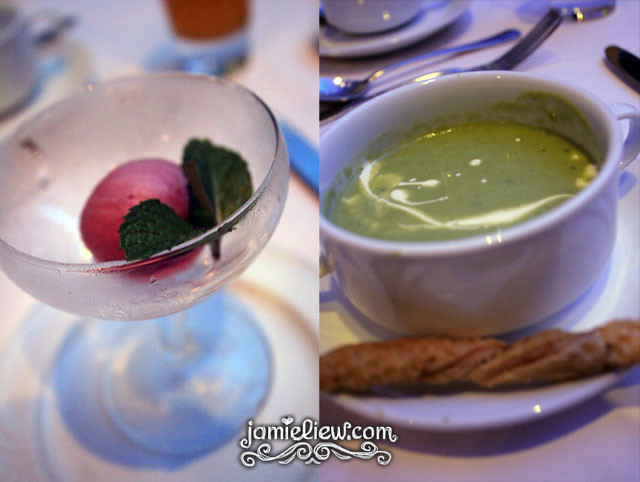 we were then served the green soup. I don’t know what is that called but it’s yummy and a berry ice cream in the middle to wash off all unpleasant taste that might mix (and spoil) with the main course later! so thoughtful! 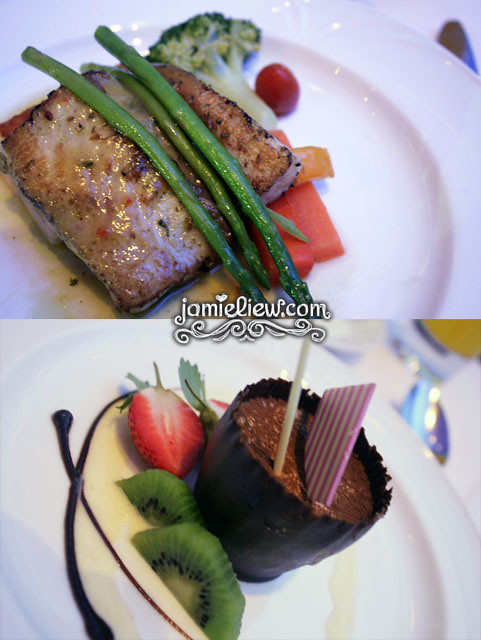 there was 2 choices for us, either fish or chicken. I choose the fish one since I shouldn’t actually eat chewy things thanks to my inflammed jaw (it’s been like this for almost half a year wth!). and lastly, the tiramisu dessert. =3. 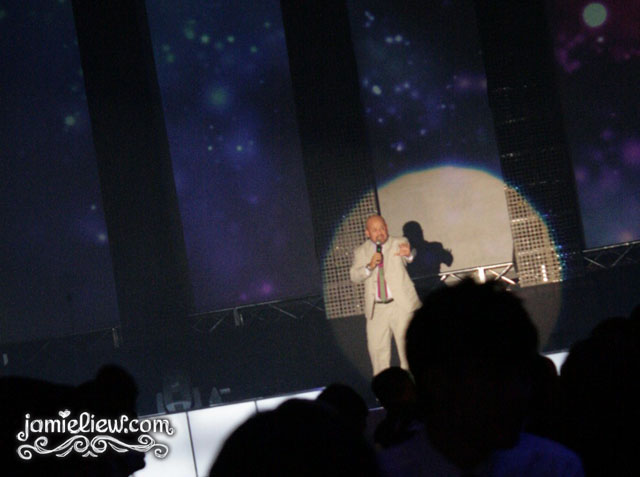 in between of the award announcements, there was performances by our very own Reshmonu and another local singer, Comedian Harith Iskander which cracked everyone up as expected and… 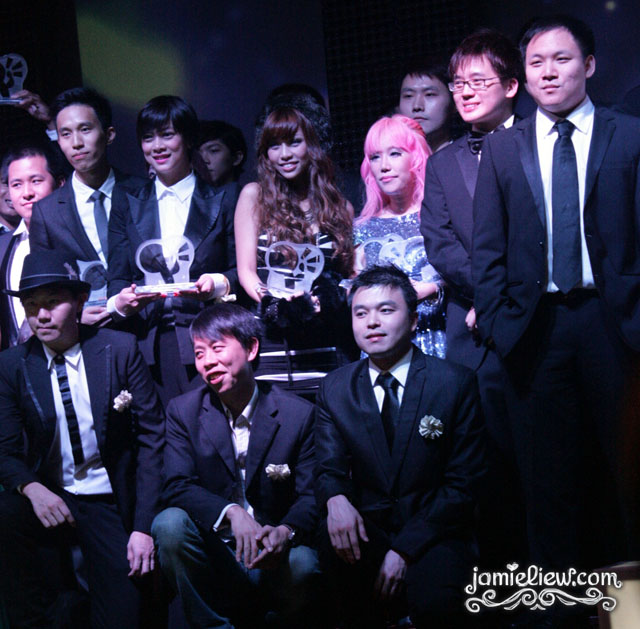 congratulations to all the winners and the finalists! 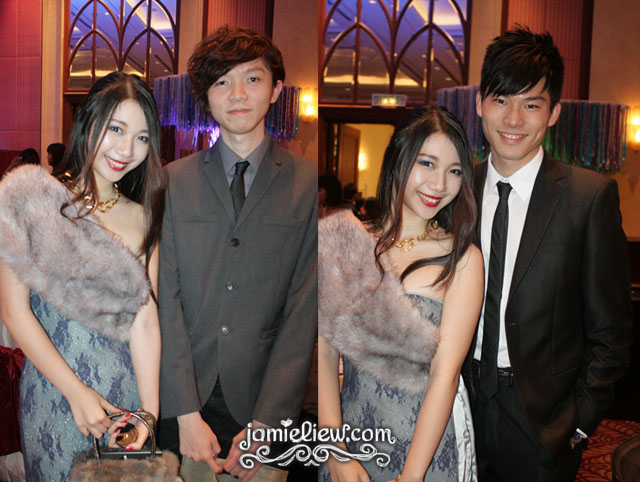 Nuffnangers from Hong Kong! I took a picture with the guy on the left, Johnee because I have been eyeing on his hair for the whole night. literally the whole night. its so aweome; all one sided and thick. it’s very odd of me but I’m weird like that. I guess he was also very shocked and later on /swt when I told him I like his hair hahahaha. anyway, he’s a rising blogger who focuses on comics and he blogs at jacso.hk/johnee

if you’re a girl, you should be very curious to know who’s that on the right. his name is Jason and sadly to say, he doesn’t blog (probably?) because he is a Nuffie from Nuffnang HK. hahaha. initially I only wanted a picture with Johnee but my friends said I should take a picture with the handsome one too. HAHAHAHA. such a night. by the way, I am very thick skinned in asking people for pictures. =D. 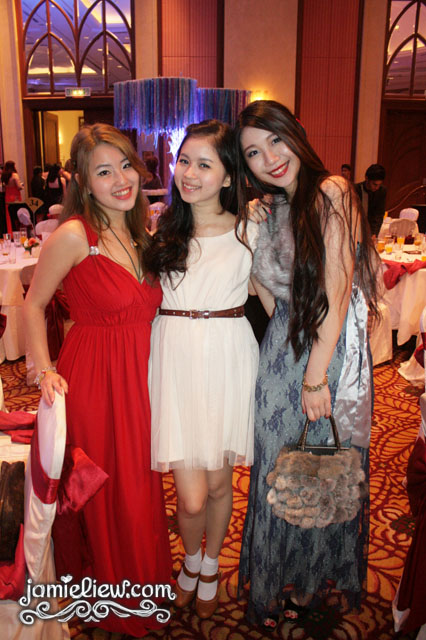 I love Nuffies in Malaysia because they know how to place us. =P. I was placed with my closest friends in Nuffnang! =D. 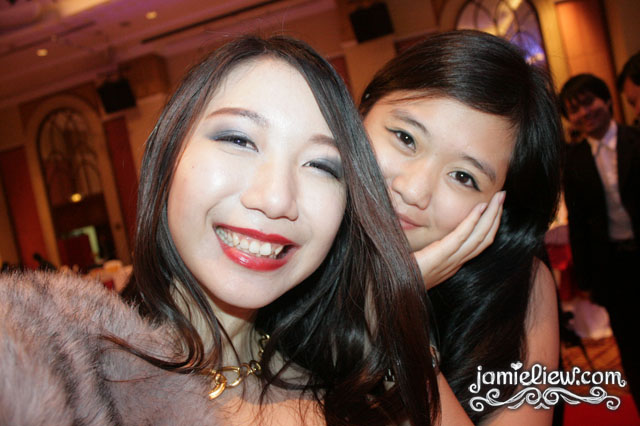 and my favourite Natalie! my face is so big I blocked Nats face T_T. 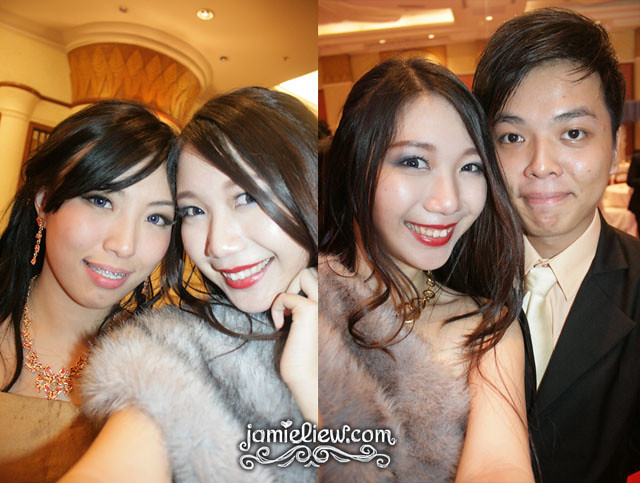 Mimi who looked absolutely gorgeous that night and Jian, who draws cute miaos at akiraceo.com! 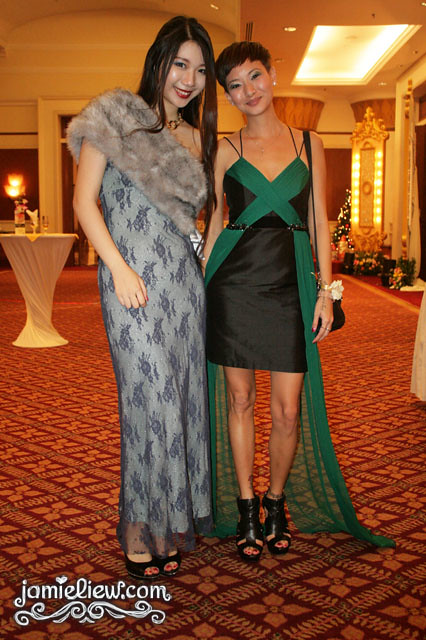 Joyce, the Kinky Blue Fairy and her beautiful pixie dress! and that’s the last picture I took. I was then driven to Zouk for the awesome after Party at Velvet Underground. =D.

-still waiting for my after party photos!-

glad to see jason is making waves among all of you. LOL. he’s a very sweet guy too 🙂

thanks for coming!! glad to see you had fun <3

Very the fast ah ! It is indeed an awesome night ! =D

LOL . so his name was Johnee! haha i was eyeing his hair too!

well, it was an awesome night 🙂 after party was good as well.

Nice seeing you again Jamie, hope to catch up with you again soon. XD