Yokohama was in between Tokyo and Kamakura and I JUST HAD TO STOP BY. what’s awful about winter is that it gets dark early so when I was at Yokohama at about 5pm it was already dark. something like our 7.30 here. 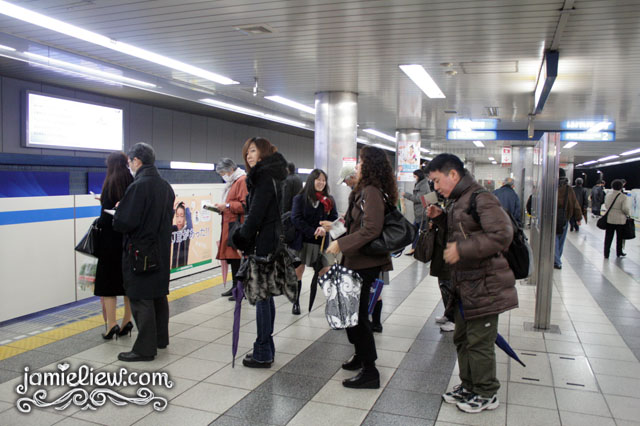 I just love how discipline all Japanese people are. they automatically form a line.

do bare in mind, Yokohama station and Minato Mirai (literally future port. it’s where the famous Ferris Wheel with the clock is) station is just ONE STOP AWAY. and even with one stop they will charge you the same amount if you go for 5 stops =(. so if you can walk, walk. save some money. haha. Japanese subways are deadly expensive. 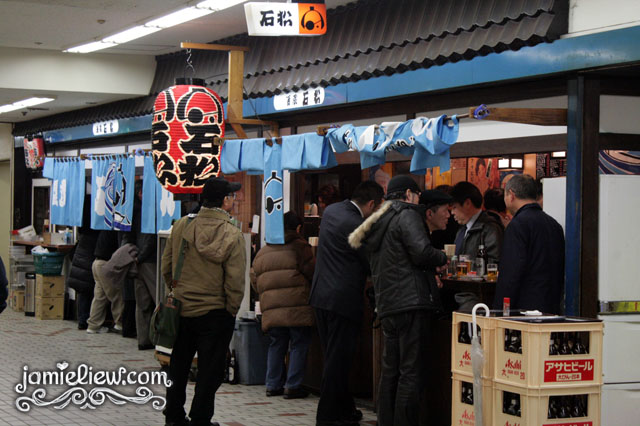 men’s bar. at least I didn’t see any women there. but there were no chairs or stools. everyone was standing! and it was such a crowded little shop! 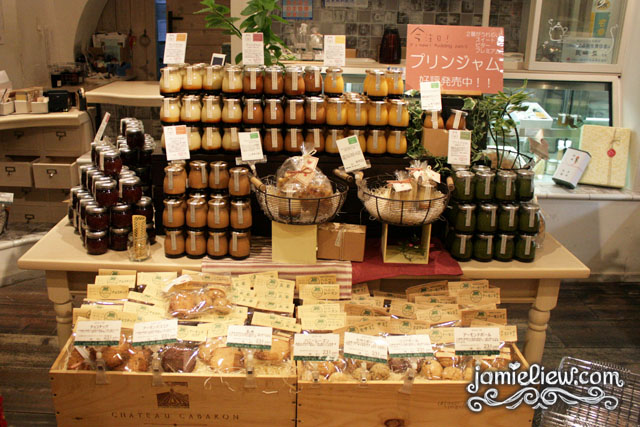 very expensive but delicious.. PUDDINGS!! how come they package their pudding so nicely! it’s so pretty! 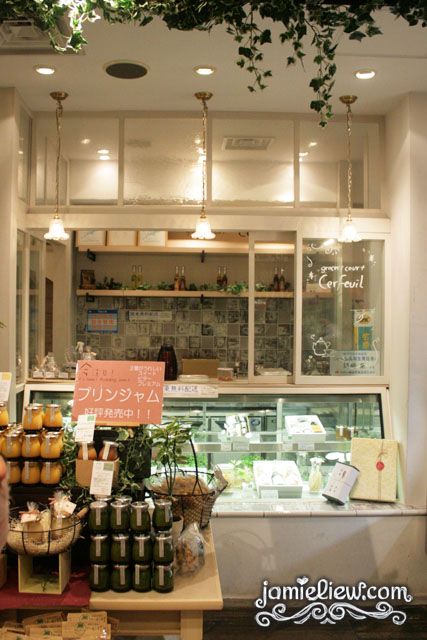 Japanese shops are just so pretty. Korean ones too. <3. I’d give them 101% in decoration! 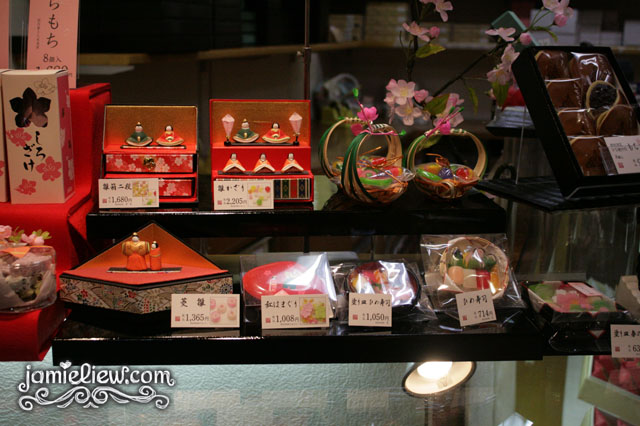 wanna buy RM40-RM80 (1000yen for just a little tray of sushi looking candies!) worth of CANDIES? =D. mad. they are selling its cuteness and creativity. if I ever receive one I think I’ll just put it on display until it rots. too beautiful to eat! 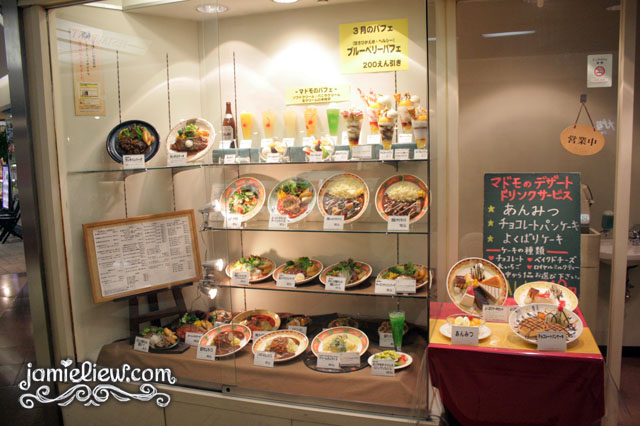 their tactic of luring you into the shop is always by displaying beautiful mock ups. 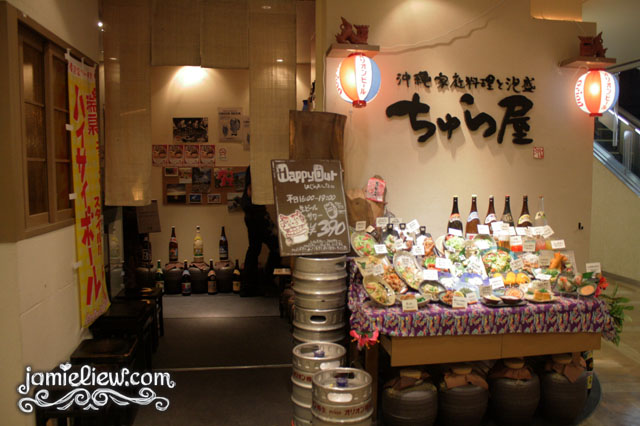 see what I mean? kekeke and somebody should tell them it’s Happy Hour, not Happy Our. =P. 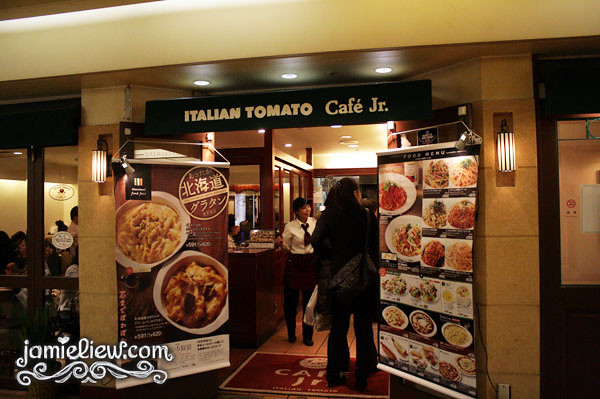 the best Italian restaurant I’ve ever been to. even Genting’s Olive (where at that time some Italian guy was the chef, should be very famous) might lose to. 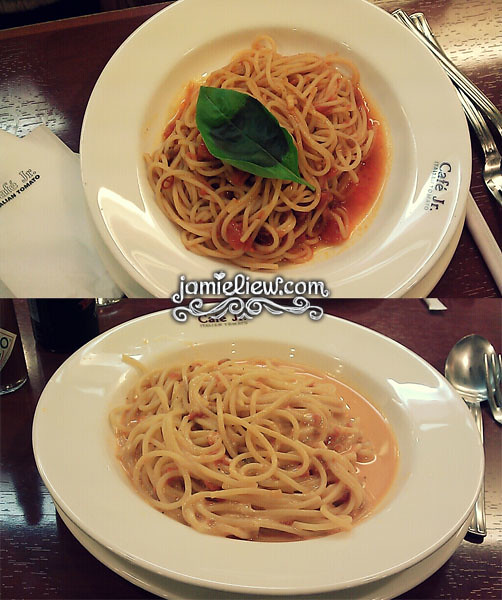 the one on top, which costs abour RM16 is the best spaghetti I’ve ever eaten in my life. it was so perfect. the combination was soooo perfect. the noodles was perfect. the sauce is special. everything is good. and heck, it’s the cheapest pasta in that shop! even the more expensive one isn’t as good! 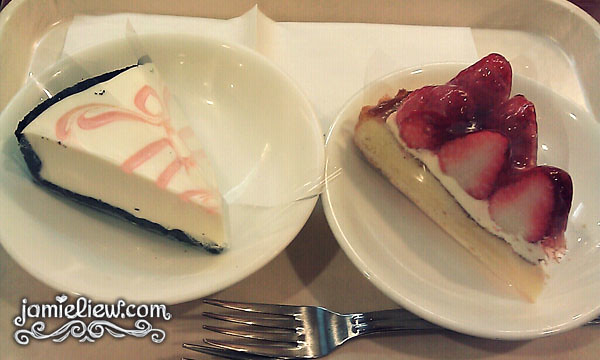 and have you ever been told that strawberries in Japan are ESPECIALLY HUGE AND JUICY? =D. 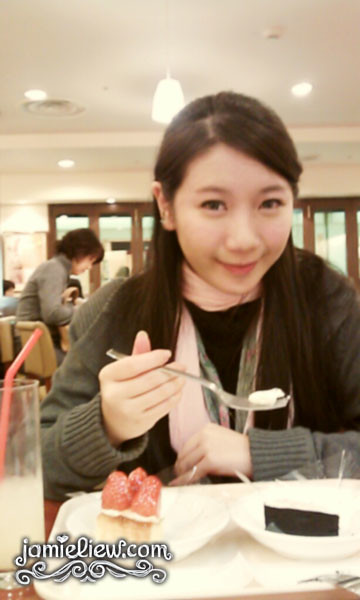 one girl with two cakes. NYAM. 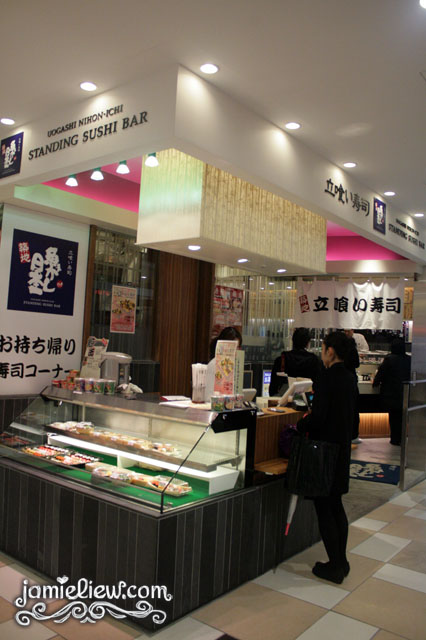 you stand to eat hehehehe. 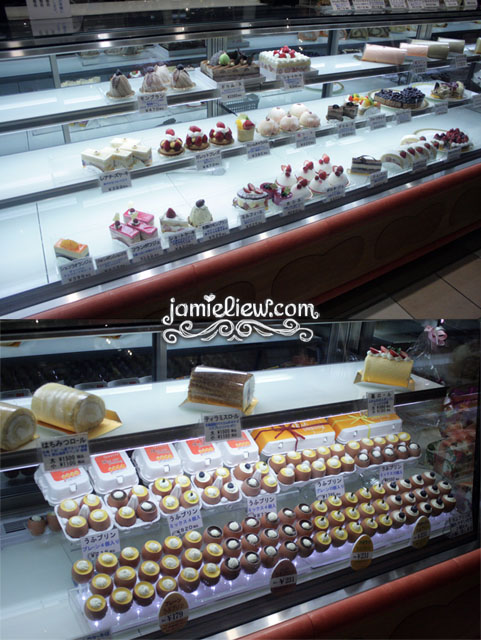 because Japanese desserts look so good, it should never be missed because it (most of the time) tastes as good as it looks =D. 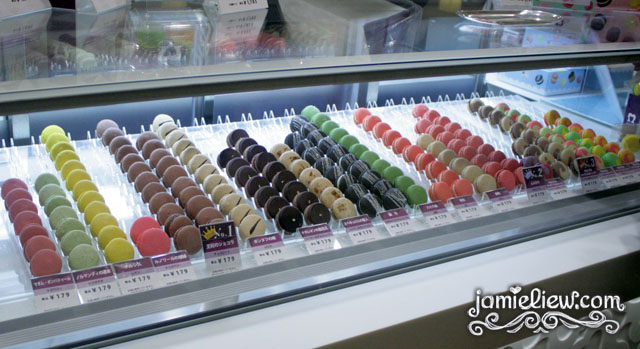 how did they make the macaroons so beautifully? going for 179yen for one! that’s.. RM7-8 for one. *faints* I rather just make it myself U_U. 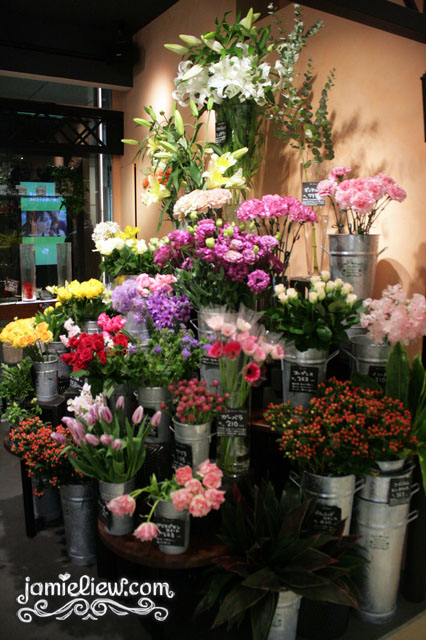 is it because the flowers are beautiful, 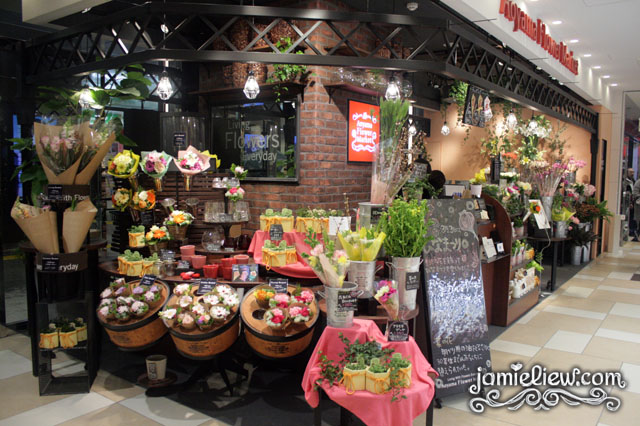 or they way they display it is simply fabulous? or both?

hmm. both I guess. but they make small bouquet of flowers look so much more romantic than a 20roses bouquet you’d find in Malaysia. 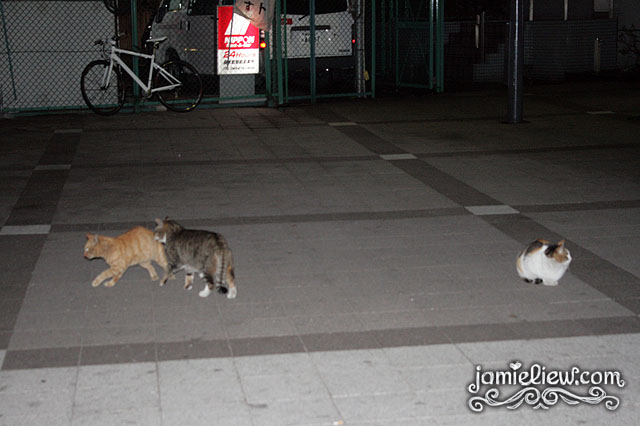 cats are really fat in Japan. actually even the birds are fat. but I didn’t get to capture any T_T. there may be a lot of stray cats around. but I don’t think I saw any stray dogs. =/. 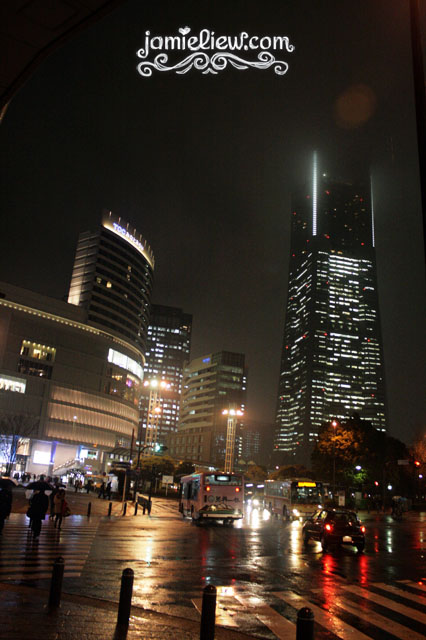 the building is so high you can’t actually see the top of it. 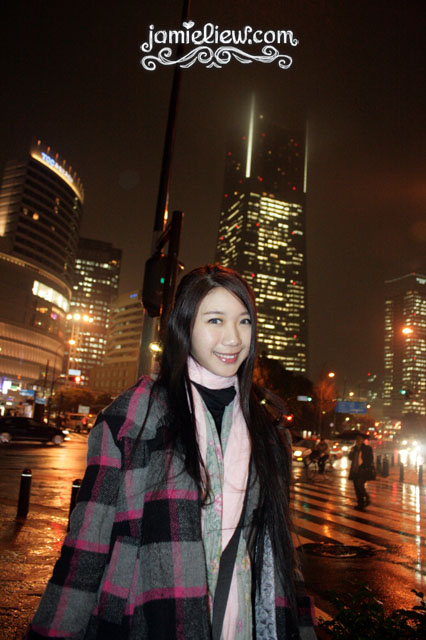 pretty awesome ain’t it? you’ll see this tall building on the way to the huge ferris wheel. 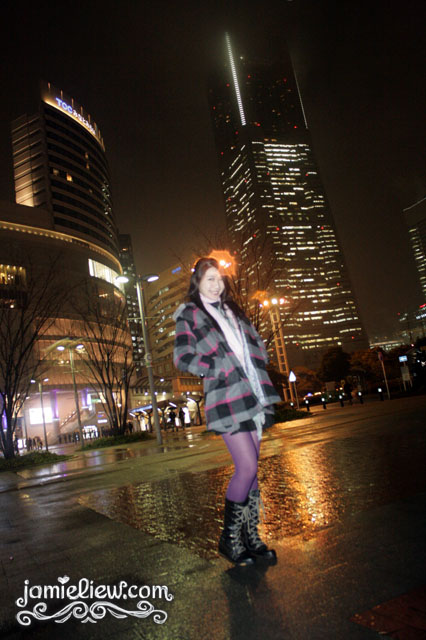 I really couldn’t see the top. 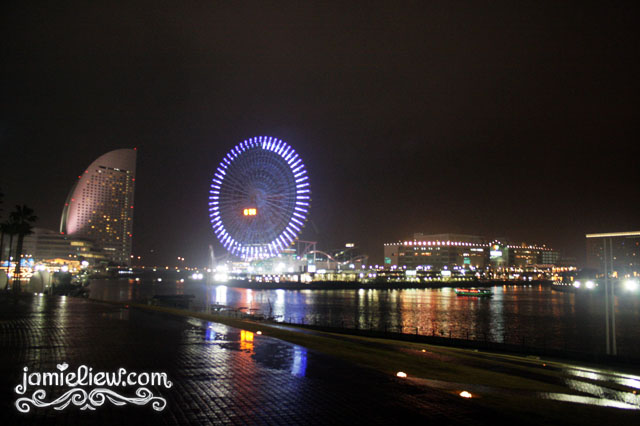 FINALLY THERE! the HUGE YOKOHAMA FERRIS WHEEL WITH A HUGE CLOCK ON IT (hugest in the world!). and Rainbow lights. it was raining cats and dogs and hence the blurness of the picture T_T.

I was so exhausted and the wind was blowing like mad. my umbrella flipped countless times and it was ultra difficult to take pictures. 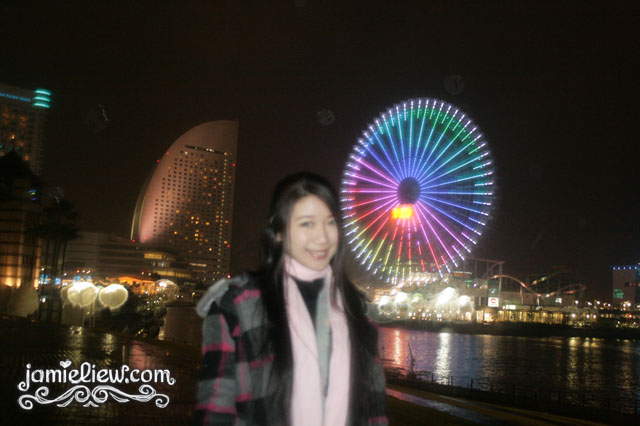 but it was all worth it because the ferris wheel is really amazing. very huge. it’s like visiting the Eye of Japan! and it has Rainbow lights! I am not sure about when it changes but I guess the Rainbow lights will only come out once in half an hour? or an hour. so pick your time wise. =D. 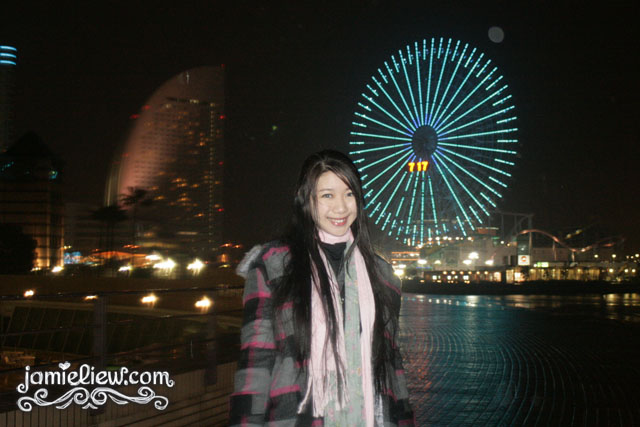 if not it’ll just look like that. but unlucky for me all my pictures with the rainbow wheel was blur. I literally had more than 50pictures here alone and only a few wasn’t blur. thanks to the rain. 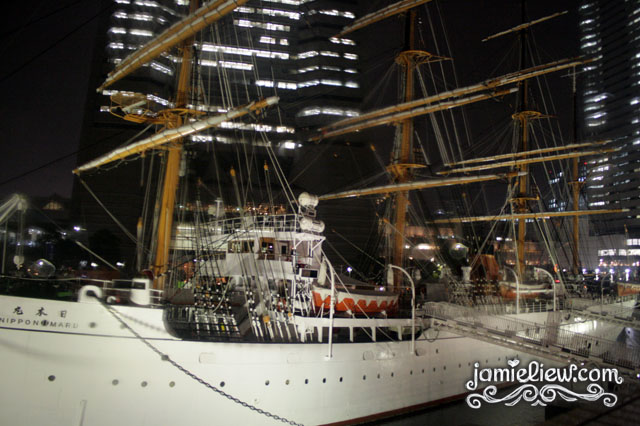 we left Yokohama at around 7.30 and still made it in time to Akihabara slightly before 8. I was bored. and I needed to visit more places. it was such a shame I wanted to visit Ikebukuro for the 2nd time which made me miss out on Ginza. but according to my mom who has been to Ginza before, she said it’s nothing more than a street of branded shops. =S. so I guess, it’s wiser if you go to places like Kamakura =D.

PS : ACTUALLY.. if you’re not too much of a fan of Ferris Wheels with rainbow lights, with the largest clock in the world attached to it; this place is nothing too special. but the restaurants here are really famous I think? because you can see queues outside many shops at the mall linked to Yokohama station so I reckon the food here are amazing. of course, restaurants in many places in Tokyo are packed too. but then none of them have queues like those in Yokohama. especially when it ain’t even dinner time yet.

I wanted to write that too! BUT I REFUSE TO BELIEVE SO. only Koreans, Taiwanese and some ppl from China eats them T_T.

glad to know there are good restaurants in yokohama, will be there on 22nd May 2012.