Kencho-ji Temple is one of the hugest temples there but it ain’t exactly the hugest. nor is it the most popular. what I can say is, the number of temples and shrines in Kamakura will definitely exceed 20. and if you really want to enjoy the scenery of each temple you’d probably only get to 3 maximum per day on a chilly winter day.

so from Engaku-ji Temple, we followed the maps around in search for more temples. 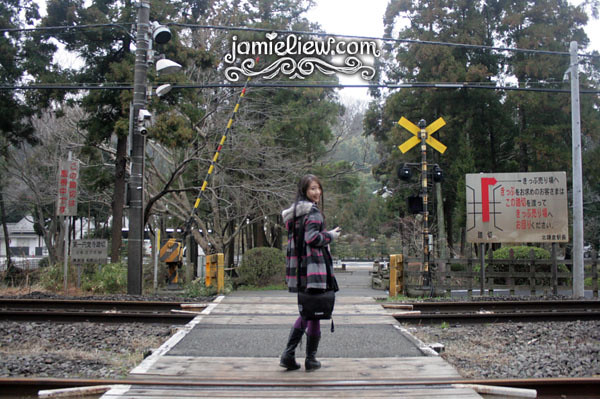 we crossed the railway tracks right outside Engaku-ji Temple and headed left. 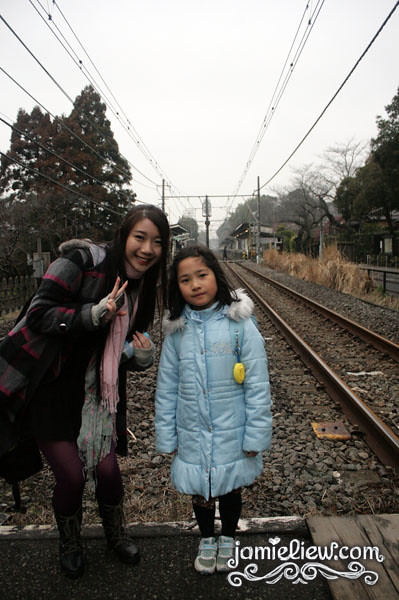 did I mention I was freezing? and it was drizzling. 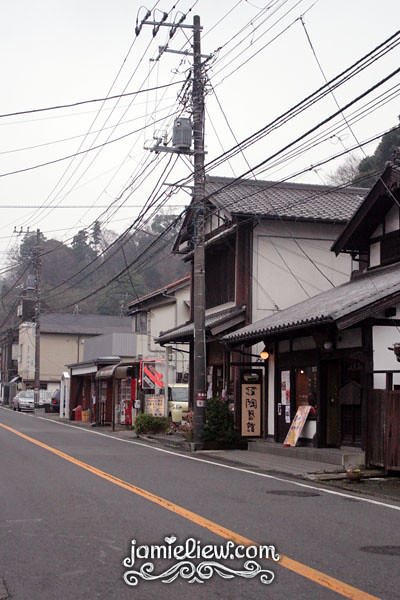 the WALK I had around this traditional little neighbourhood was splendid. it was phenomenal. you’d never find any place like this in Tokyo. what I am talking about is, you MUST pick a day and get yourself outta Tokyo to visit the countrysides (I sacrificed Tokyo Tower for this place. T____T. WORTH IT). 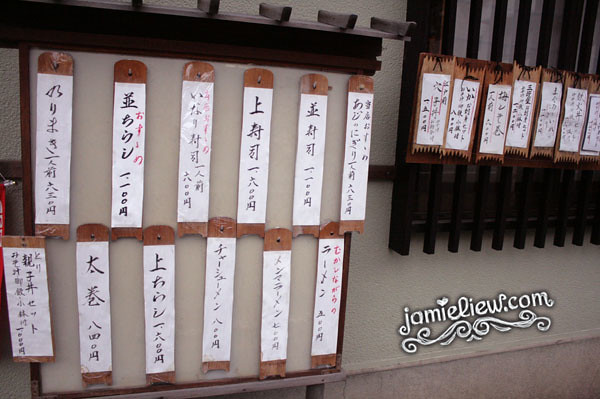 can you believe it these are actually menus and prices. thank goodness for me I am able to read Chinese numbers so I know. =D. I know a little words only though. like.. a hundred? =(. 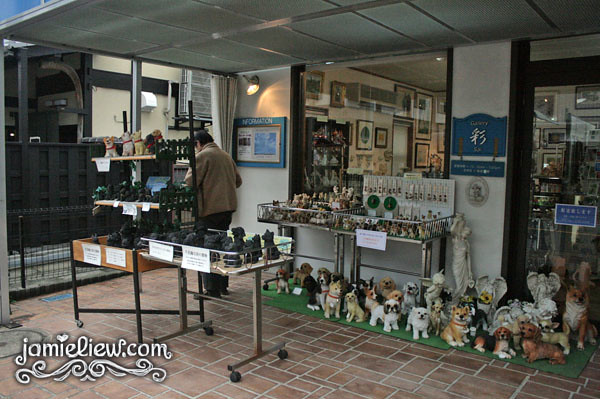 sadly, it is pretty commercialized. well, when a place is this beautiful it ain’t gonna run from being commercialized. but well, this is like.. a dog gallery. it sells and displays everything related to dogs! YAY I LOVEEE. did you know about this Cat Island in Japan? further east. I’d like to visit it but I really dislike cats. D=. 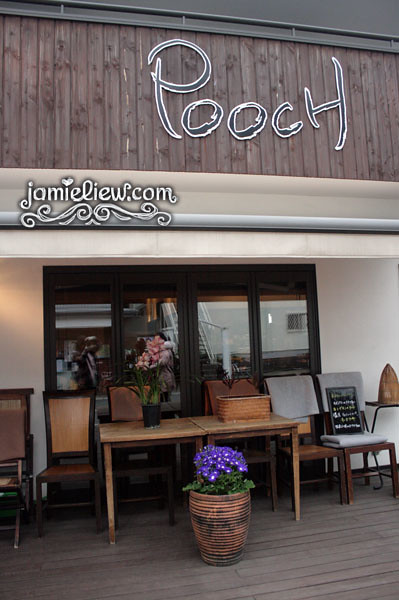 pretty cafes along the “main road”. and you can always stroll around the housing areas near the KitaKamakura station. absolutely authentic and beautiful. 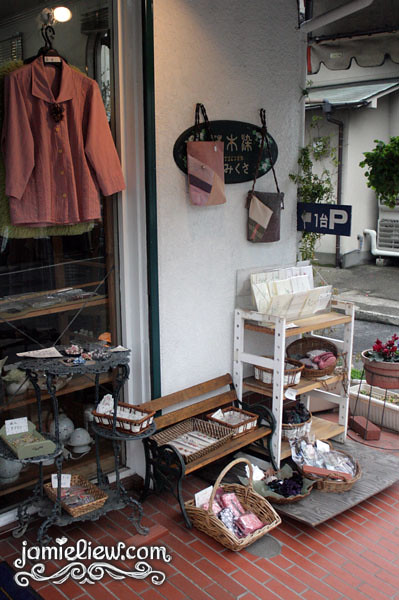 Japanese people are forever so neat. and pretty. 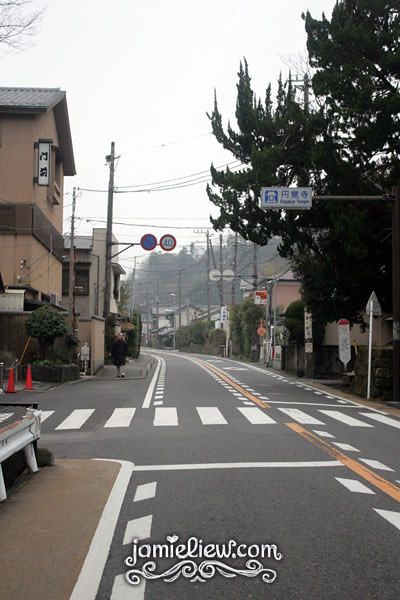 the walk is around 15minutes but with such a view? I’m not tired! 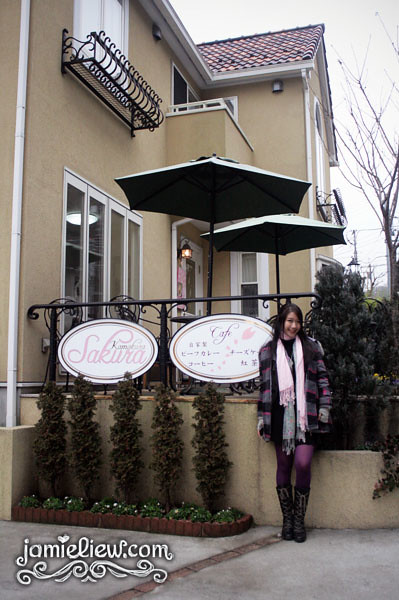 Sakura Cafe. during the Sakura season, Kamakura is actually FILLED with Sakuras? it’s almost like a dream. T_T. there was some brochures and posters around Shinagawa station which was going to take off to Kamakura. (and it was nearrrrrrrr the Sakura season! T_T)

and it’s something like.. pink snow when the wind blows U_U. 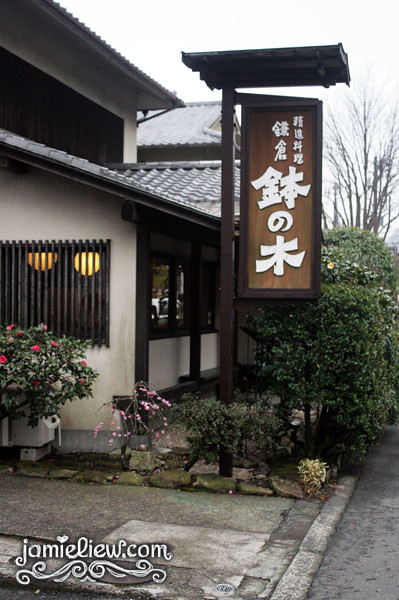 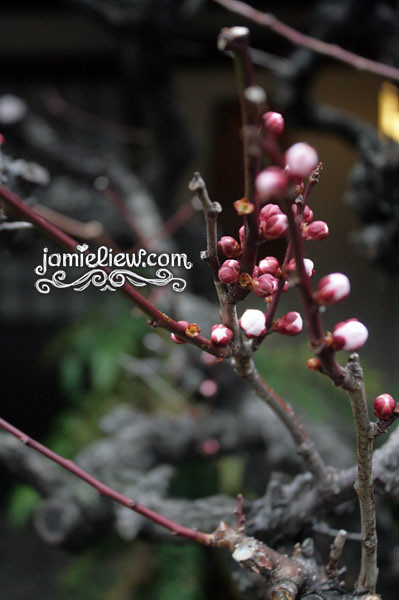 SAKURA BUDS! why oh why T_T. but there was this tree in DisneySea which was fully bloomed! but well, there were only a few of them T_T. there’s a park in Tokyo called the Ueno (oo-eh-no) filled with Sakura trees! will blog about it later. though when I went it was all pretty bald. =(. 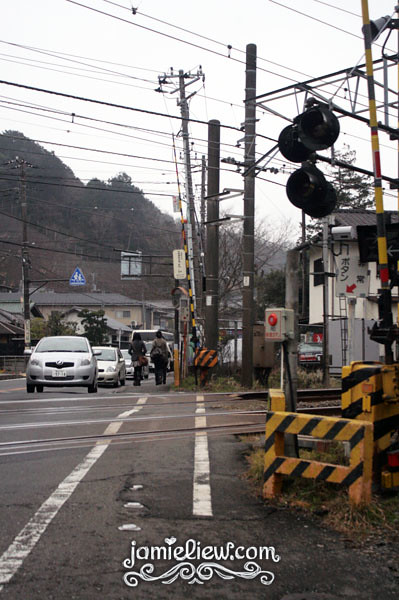 more railway crossings!! I am weird for fancying these. =S. 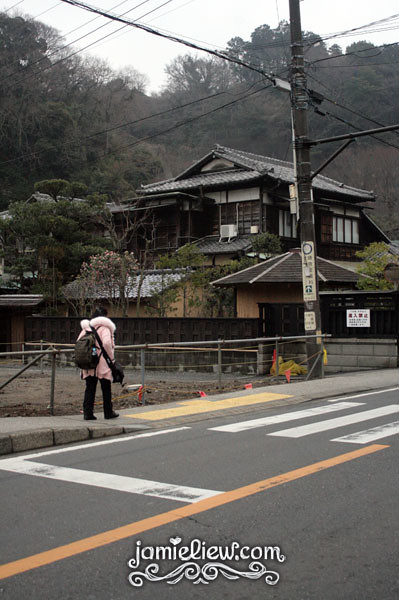 SAMURAI HOUSE! and that’s right that’s my mom. I chose to walk on the other side because I think that her side is prettier and because I’d rather capture the full view of the beautiful view rather than to see it closer. such a huge sacrifice for all of you reading! tsk tsk. 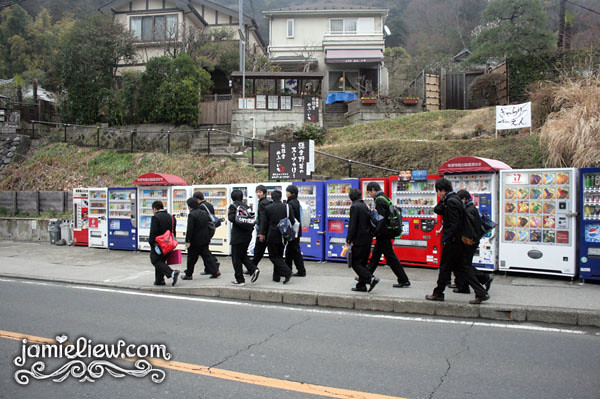 the LONGEST ROW of vending machines I saw there. and there’s a school right beside Kencho-ji Temple! ^^.

and those are the dream uniforms <3. I’d love to study in a school where guys dresses like that. so cool T_T. girls have fantasies for guys in school uniforms just like how guys does. =D. except that the school uniform must be MADE IN JAPAN. hahaha. 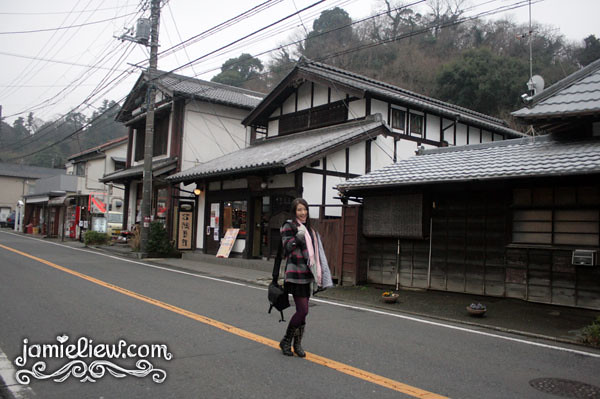 see how huge the “main road” is? =P. but because everybody here’s so healthy, they either take bus or walk, I can stand in the middle of the road! =D. 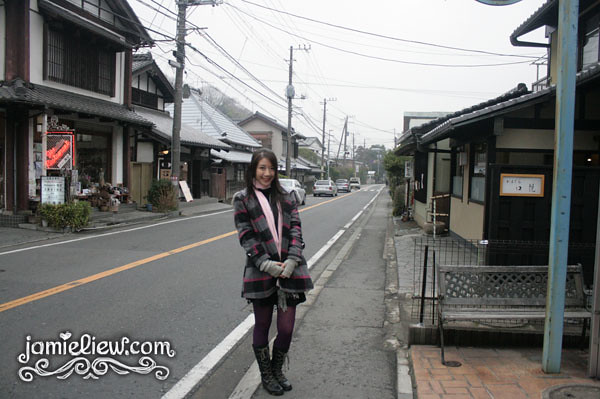 it was really cold. I was wondering how those Jap school girls could just go out in mini skirts WITHOUT any leggings. my pantyhose was quite thin but at least I have another layer of something. but my hands were literally numb. I couldn’t really feel anything. D=. it was my worst experience holding my camera because I can’t really feel it. so afraid I’d drop it.

oh, remember to bring TISSUE. your.. nose will get runny. without you knowing it. =/. 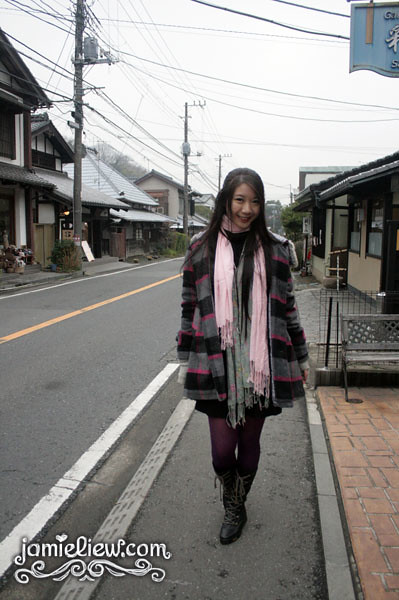 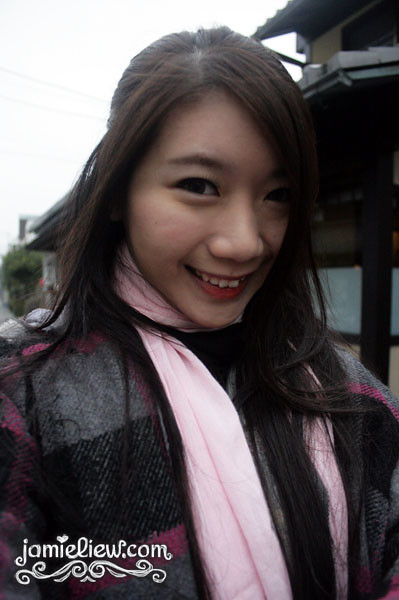 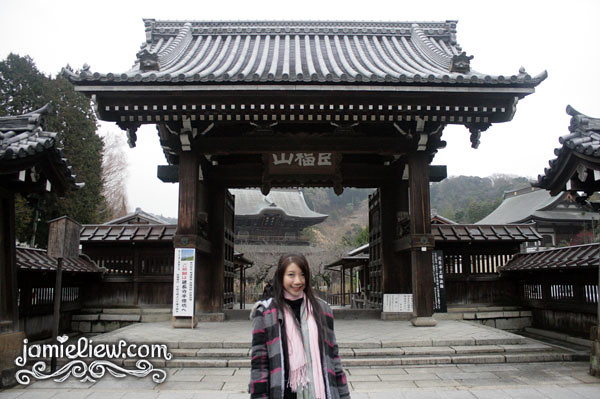 FINALLY! the entrance of Kencho-ji Temple. pretty long walk. great thing about Japan is that they have warm rooms or places for you to melt in in case you’re dying from being ice cold. 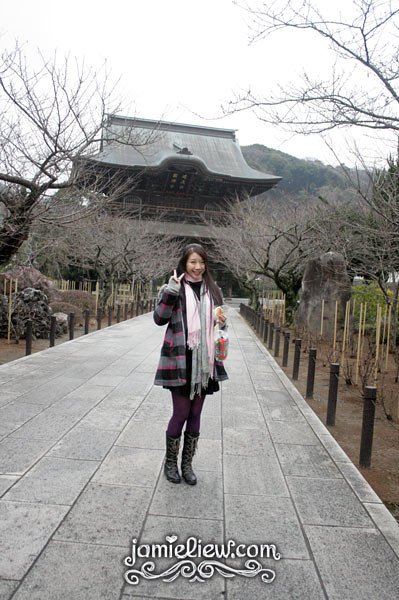 there’s a row of shops outside. so when you’re hungry, you can glutton up like me. =D. 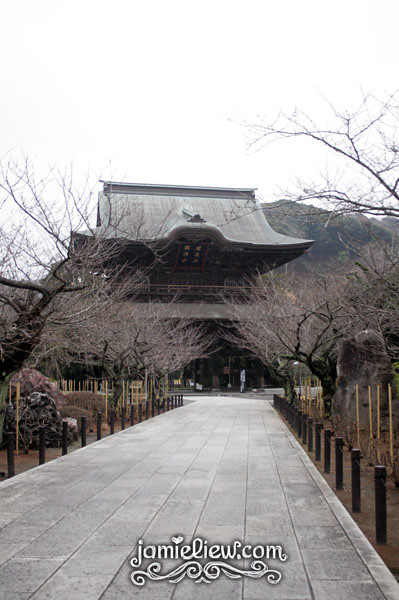 such a beautiful place U_U. was told the other temple has like a WIDE LAKE and ANOTHER ONE has a BIG BUDDHA. gosh. I wish I had more time there. didn’t know about it until somebody who lives in Japan told me about it. really, not a place to be missed!

(actually when we went back we had a choice to visit ONE MORE temple but we were just too exhausted. but trust me my most exhausted day was in DisneySea. and I’m a girl who walks from 11am to 11pm non stop in HK. probably because it wasn’t so cold.. and I didn’t have to carry a DSLR pfft.) 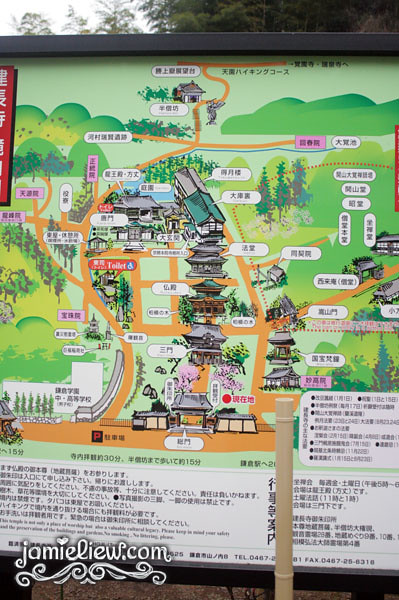 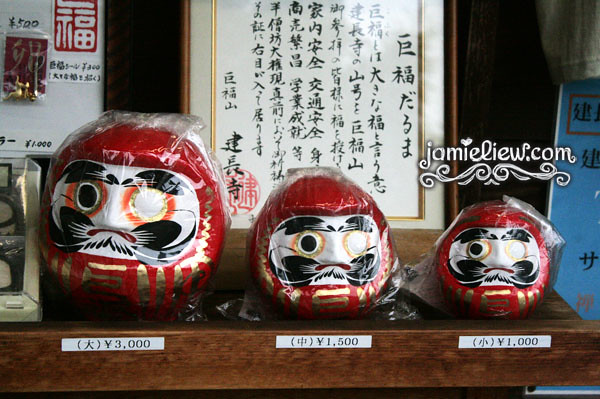 souvenirs ain’t so.. affordable if you were going to buy them for your friends. =/.

your only choice are 100yen shops or errr, stationeries? =S. super exp for stationery but it’s gonna be a good investment.

I really love reading your posts – such details and entertainment all in a post! Keep it up. I’m gonna visit some of these places you recommended 😉 Thanks!