HELLO ALL! last Saturday was the GRAND FINALS for S.O.X. All-Stars Hoops ’11! located at Bukit Kiara Equestrian & Country Resort on a rainy morning, the boys shone brightly with all their crazy moves and enthusiasm!

why is the match this year a lot more exciting compared to the last? well, they have upgraded the 3-on-3 to 5-on-5 now! and that’s world class. >=3. 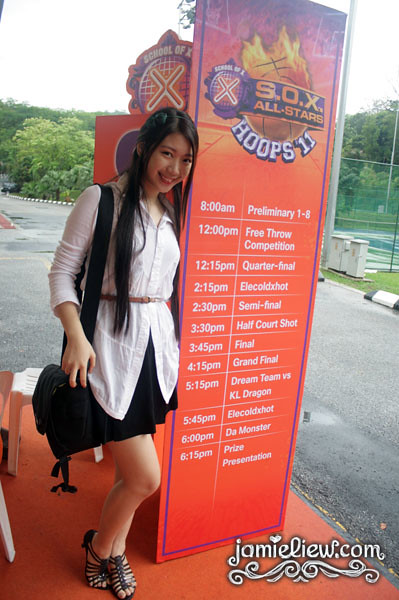 was sick (still am =S. sorry for having to look at my sick face T_T. wuwuwuwu.) so don’t ask me why am I wearing long sleeves during this horribly hot weather. haha. the competition started at 8am but it didn’t regret anybody for waking up so early because it IS AWESOME. there were quite a number of performances by our very own local celebrities, Da Monster and the professional dance team, Elecoldxhot! 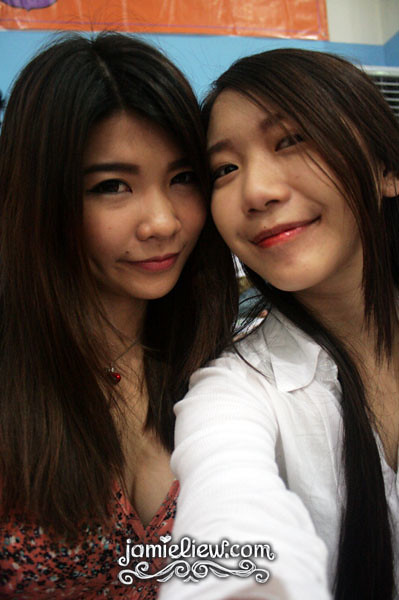 the pretty Shin Yee and myself. rule to looking good : never take pictures beside somebody pretty.

and I just broke the rule T_T. 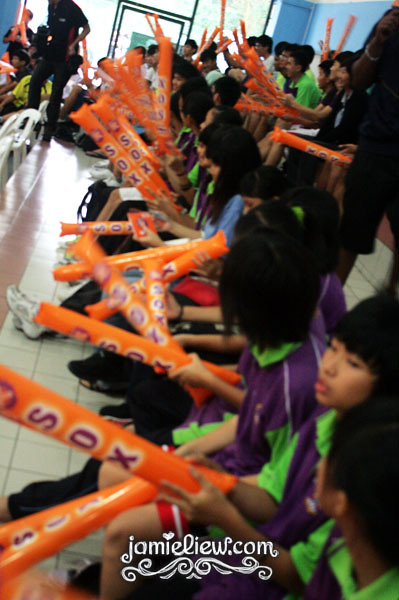 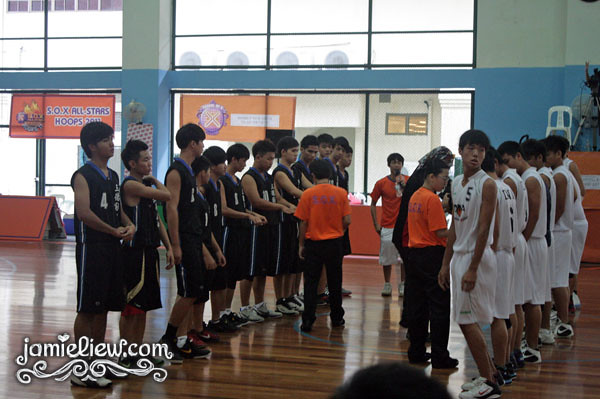 nail checking time! so that nobody is harmed by long nails! =D. always good to have such precautions. and they were really strict! a boy had.. not too long nails and he was still told to cut them shorter!

but the horror of the day is. I sat facing the light. my pictures taken for a few hours ended up.. terrible on my computer. but luckily I noticed Ming sitting on the other side, where all the photographers are! 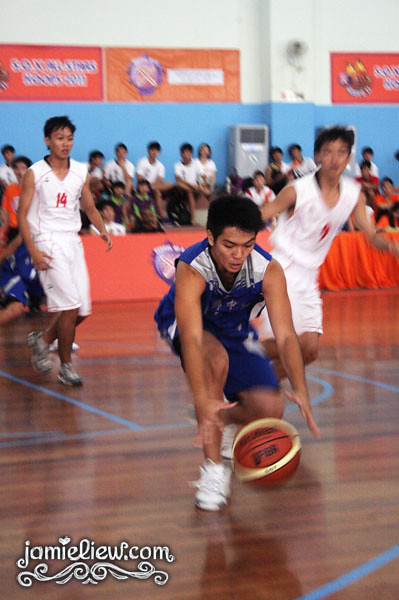 but sitting on this side has its disadvantages. a ball almost hit me.. more than 5 times. D=. but I wasn’t THAT unlucky, it ALWAYS misses me. =D! 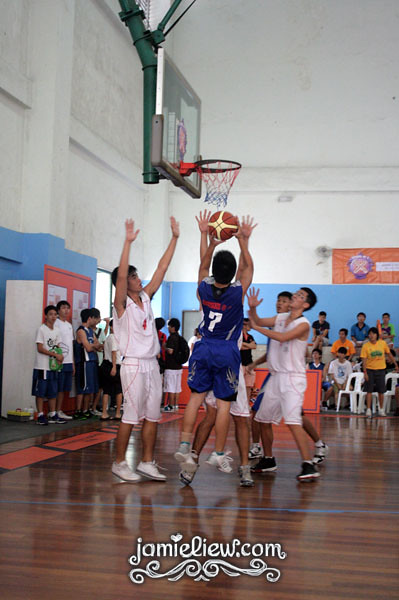 one thing awesome about basketball is that, even if you’re about to shoot, you might not get to shoot. the reason why basketballers should be tall is so that nobody can be in their way =P. 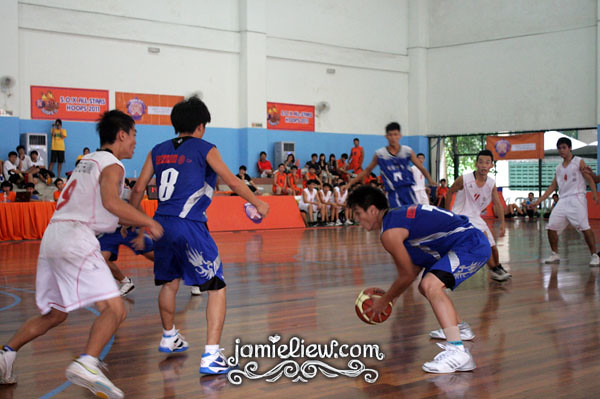 every game was furious, it’s true. it’s nothing like watching it on TV. in reality, the games make your heart throb. 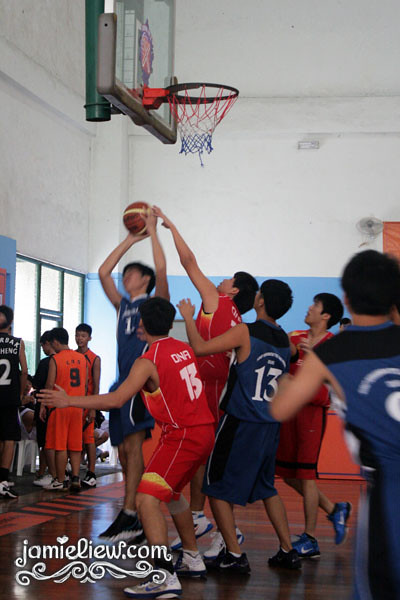 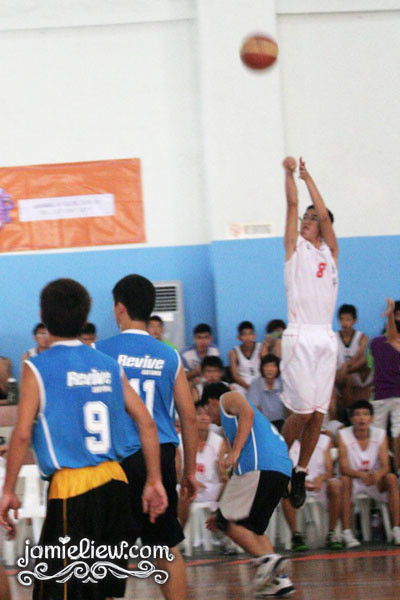 I feel mean for saying this, but awkward angles makes me happy! =D. 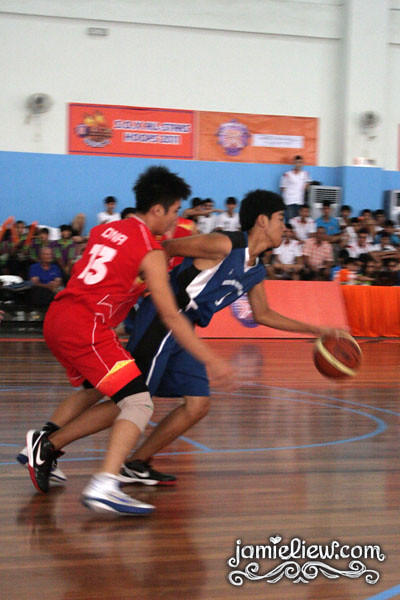 noticed how furious they are on snatching the ball? 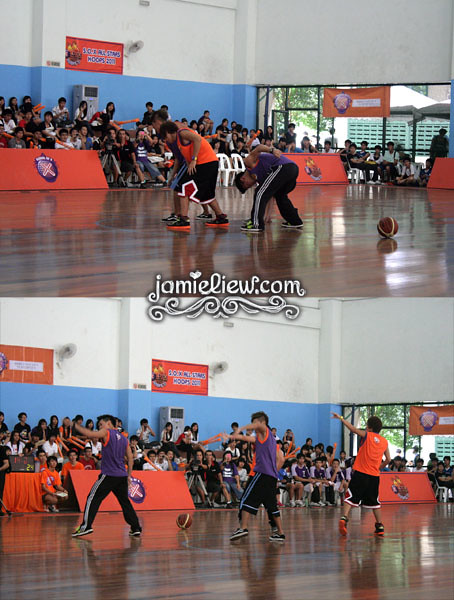 Elecoldxhot! it took me forever to guess how it’s pronounced. until I get to know that they are very very popular by the two teenage girls sitting beside me and they call them “Elec-tro-shot”! =D.

but these boys were really something. it is NO WONDER that girls are so madly in love with their dance moves =P. 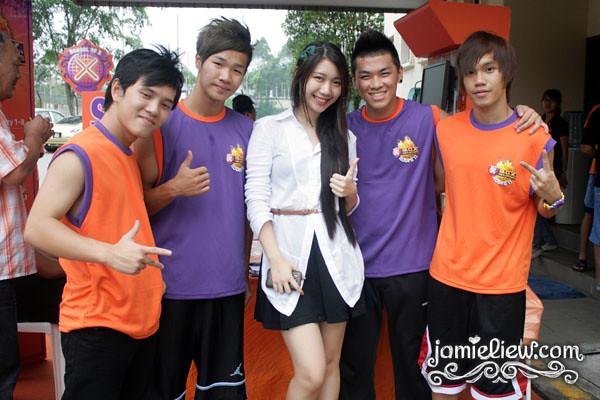 being as brave as I am, I asked for a picture! =D. 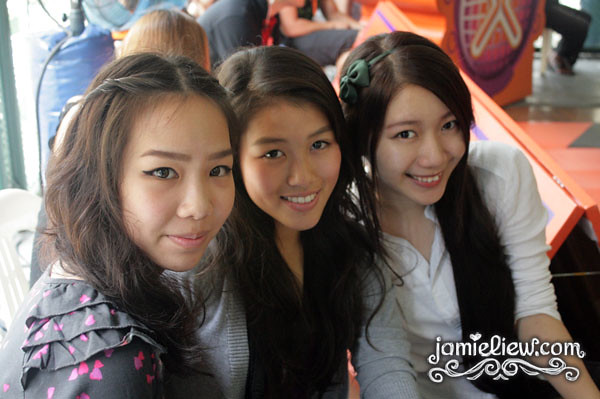 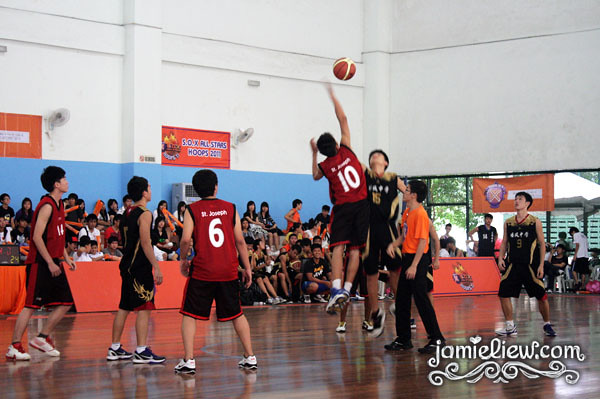 I realised something about the numbers on their shirt. it seemed to be distributed according to height! like, the taller one wears the bigger number D=. please tell me if I’m wrong! 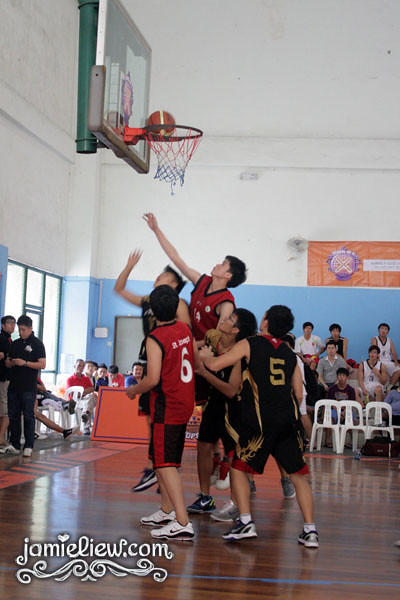 what makes basketball so exciting to watch must be their urge to basket the ball. they’ll do ANYTHING. I repeat, ANYTHING just to win a point! 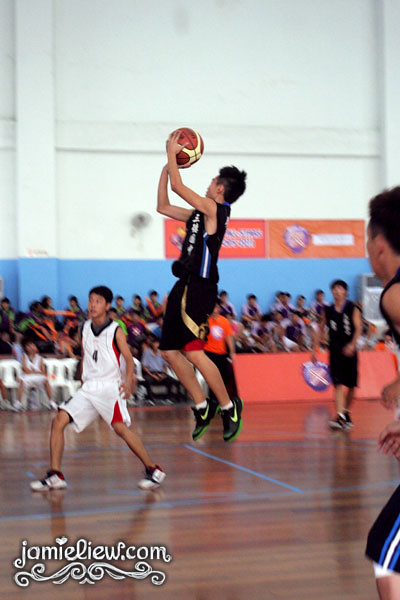 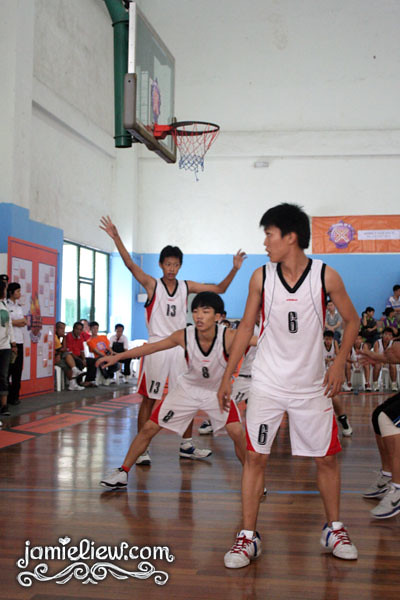 they’ll receive the ball in all angles. because they can! 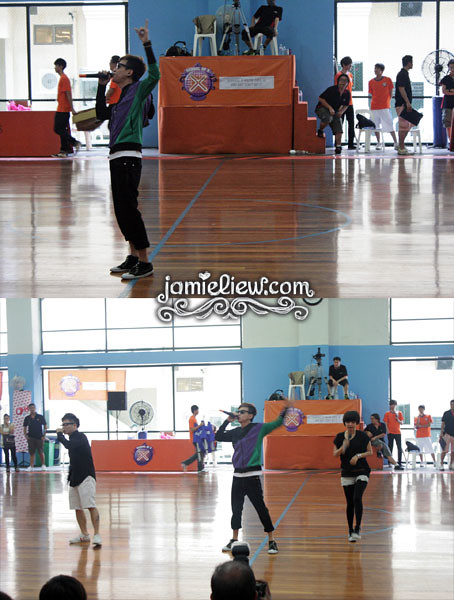 Da Monster! Danny One should be really familiar to you no? he was in the Astro competition and his popularity was booming from events to shows (his own travel show!) 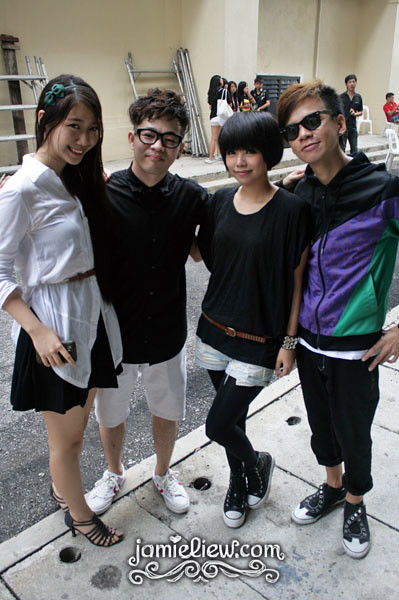 rushed out of the stadium for a picture with them. again. hehe. 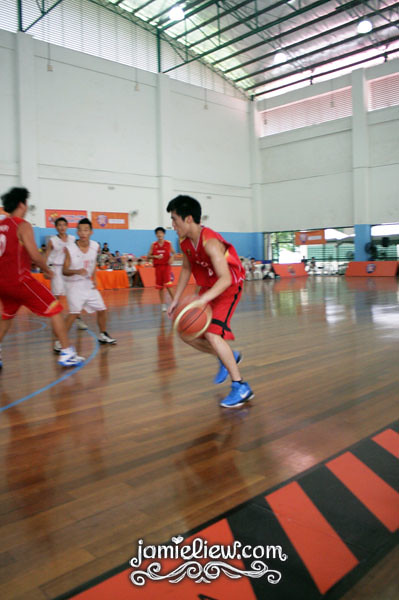 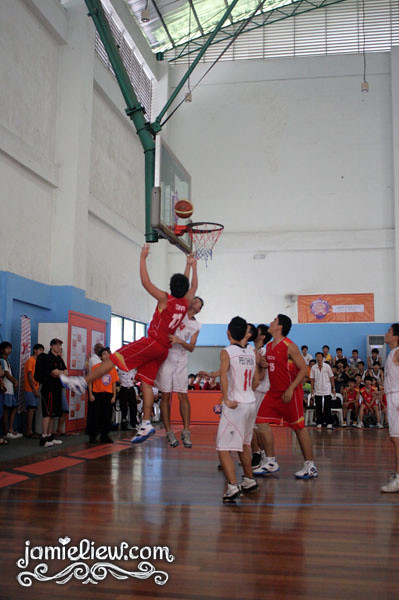 my favourite team =D. those in red; SMK Methodist (ACS) VS. Pei Chun High School. it was a real tough match. both were good. but of course my favourite one is better <3. 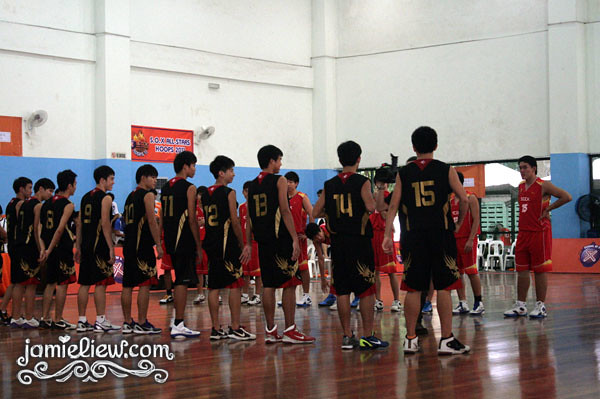 AH!!! MY FAVOURITE TEAM GOT INTO THE GRAND FINALS! I’ve rooted for the red DNA team (SMK Methodist) because they have great strategies. they pretend to look as if they want to throw the ball into the basket, but they end up passing it to a friend whose not guarded by any rivals. SO SMART!! and they kept doing it but it works EVERY TIME! it was like playing the psychology game. awesomeness!

and guess what? MY EYES ARE GOLDEN. the team I rooted for since I first saw them, TOOK THE CHAMPIONSHIP AWAY! congrats! 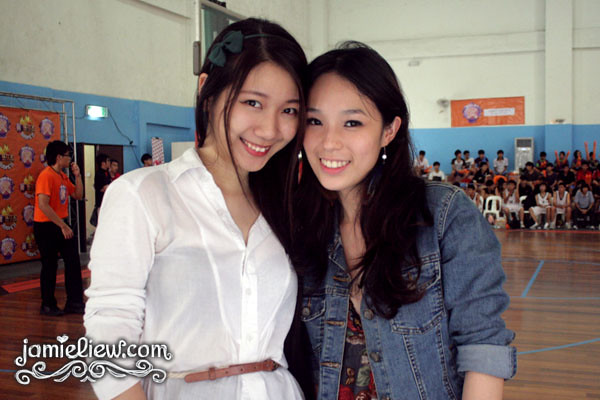 MING! I have been a fan of her blog ever since I saw her on MDG (Msian Dream Girls). she was my favourite. not only because she’s as beautiful as a piece of art, but it’s also because she is an artsy girl! she’s a fashion blogger and the way she dresses up makes me want to diverge a little to fashion too. but that also mean that I have to own an entire new wardrobe. I’ll just dream on for the whole new wardrobe but thou shalt wait just a little more for me to get more fashionable! rawr!

Do get well soon, rest more ya

save u many times leh~~
so din kena ball~~