last Saturday was the finale for the S.O.X. Drum and Dance competition @ The Piazza, The Curve! after the long awaited moment, I finally had the chance to see the cheerios up close as my seats were really really close! hence the better shots, even when I was sitting. =D. 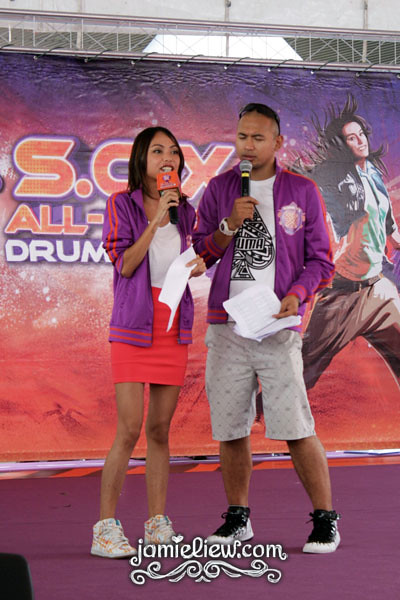 our MC’s of the day! Zher and Hafiz from FlyFM! and Ean backstage at that time.

I arrived slightly after 10am, just in time for the first batch of All-Girls Category. I have to say, they went through a lot to have made it to the finals. I have been in a competition before. I know! 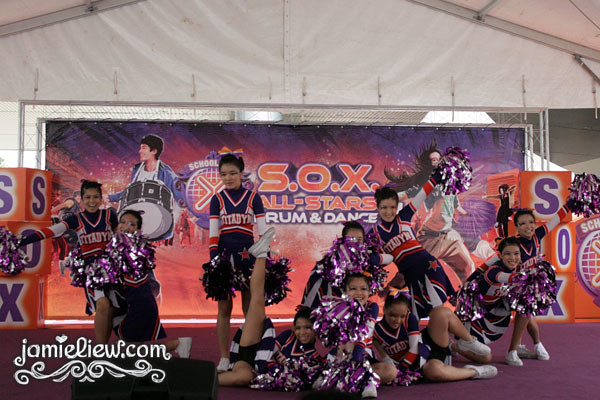 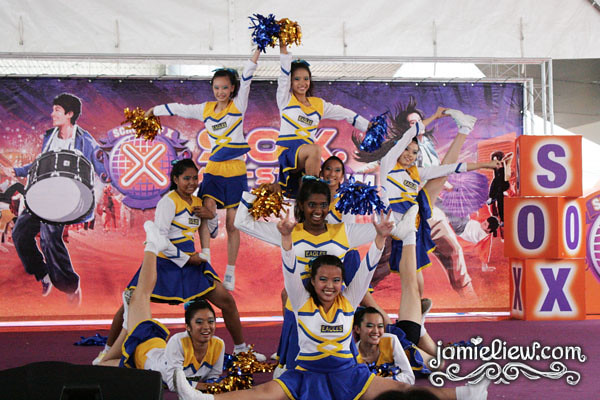 Eagles from SMK (P) Methodist! they won the best showmanship! it’s all shown in their faces, no? 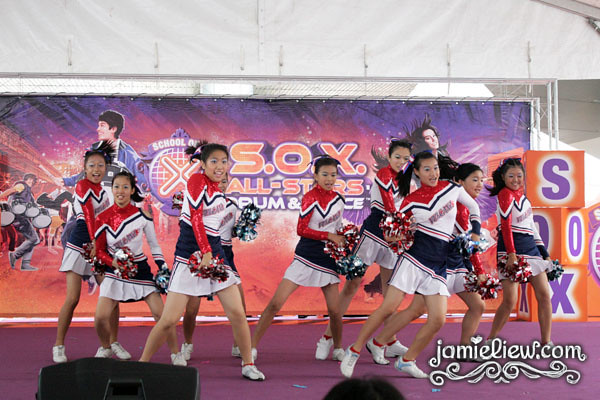 Vulcanz from SMK Seafield! I used to root for Vulcanz all-boys just because my close friend was in it. but there weren’t any Vulcanz all-boys no more and my biased mind automatically substituted them with Vulcanz all-girls. but I am actually not that biased, because they won first place! it means, they ARE good! 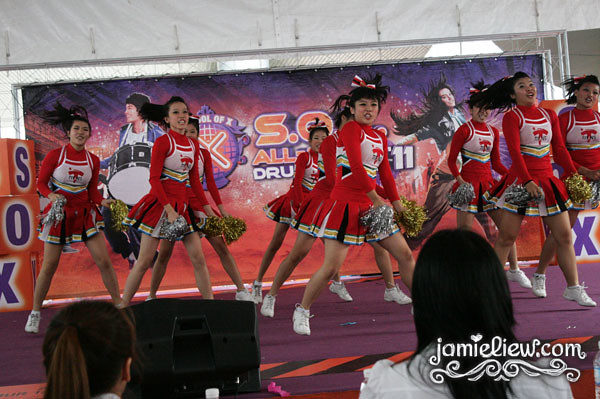 Titans Senior from SMK Ave Maria. all the way from Ipoh! 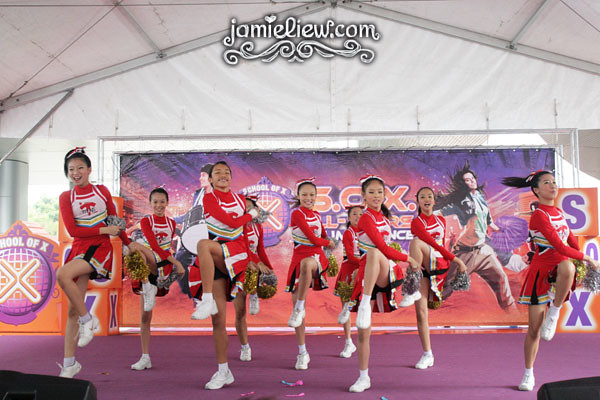 and the every so bright Titans Junior! 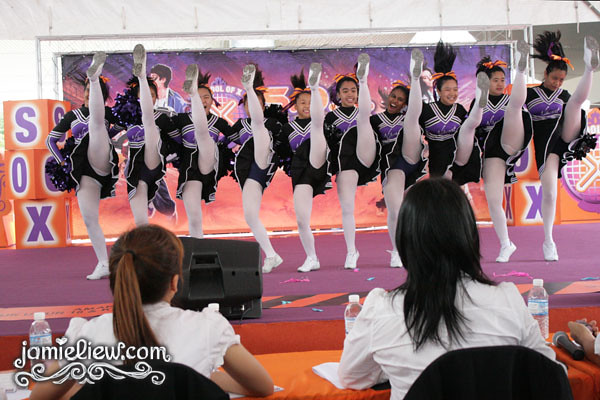 Vibrant A from SMK Puteri Titiwangsa who won third place! 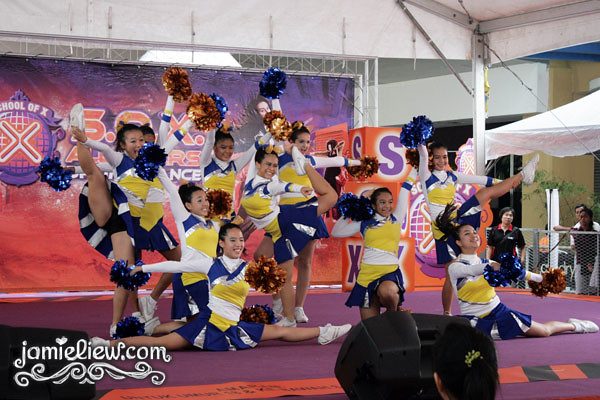 Hotshots from Tenby International School! and they were really good. they were smiling all the way! and hence, they won second place! 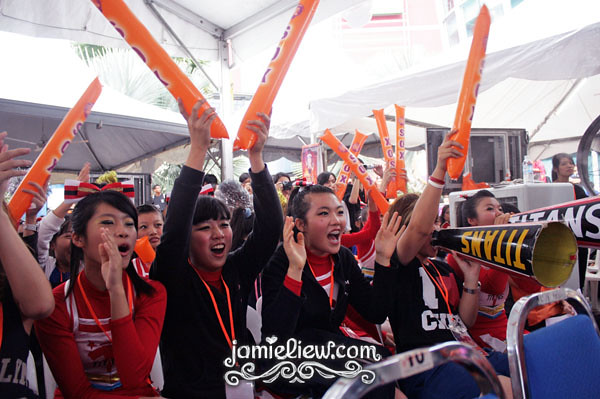 the Titans were REALLY supportive. they cheered for every single group and I just had to take a picture of their enthusiasm! 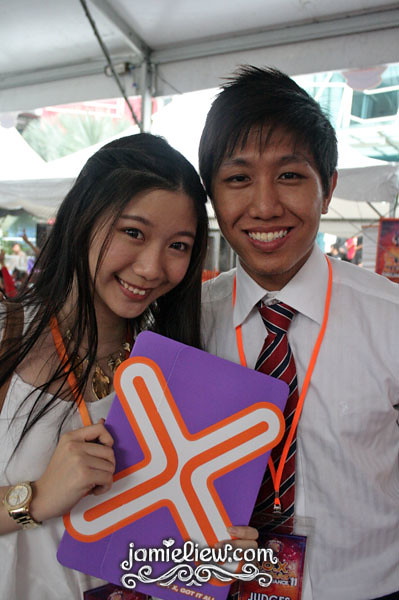 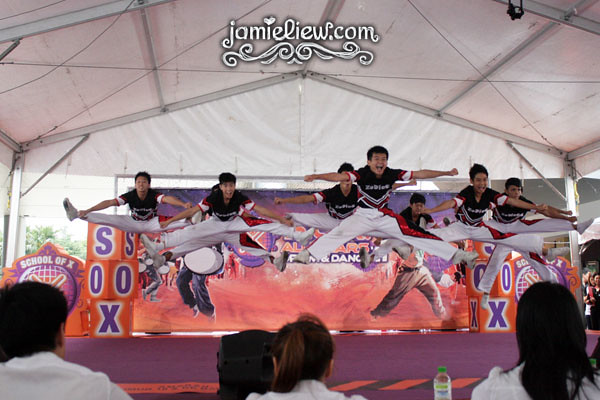 Zodiac who won second place from SMK Kepong! I saw them almost every year and I have to say, they improve every single year. I actually enjoyed all the all-boys cheerios very much because of those stunts that they are capable to do. and they seem.. more energetic too? haha. 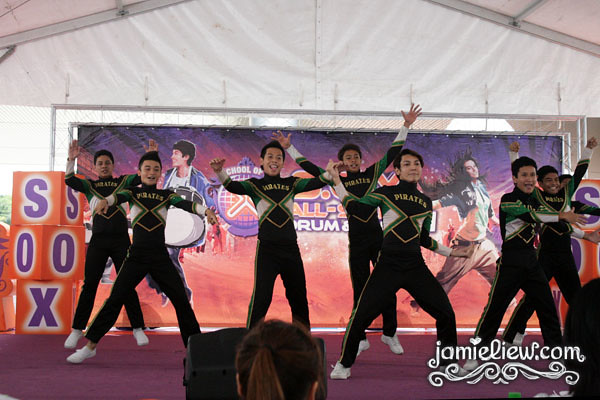 Pirates, THE CHAMPION, from SMK Cochrane! also the best dressed!

they were very cheeky and fun, I have to say. definitely very entertaining too =P. if there were no categories, I am pretty sure that they will take the championship away among all categories. they were super energetic from the beginning to the end! 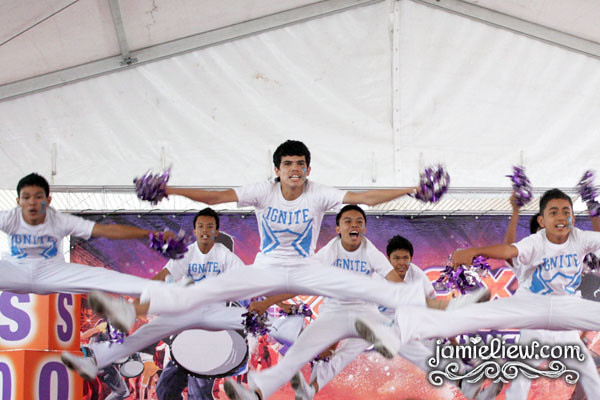 Ignite who won third place from SMK Bandar Baru Uda! that guy in who’s the center of attraction of this picture, WAS the center of attraction of the whole performance. not only was he energetic, he was enthusiastic. his facial expressions and his actions were so powerful that me and the other bloggers wow-ed at him. he reminds me of Jo-Kwon from 2AM. they way the dance and all. very sporting! 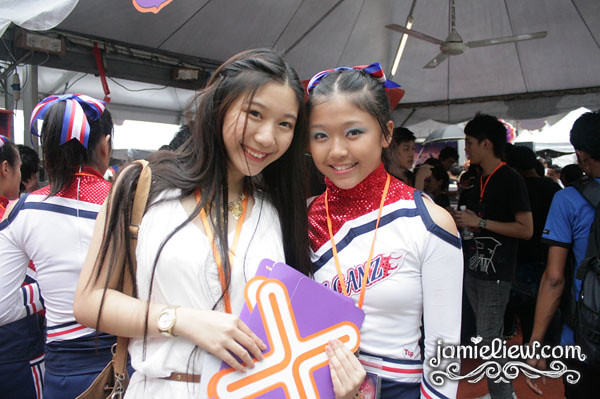 a Vulcanz Cheerleader! I absolutely adore their outfits. it’s just so pretty. their designer is amazing, whoever that is. every single year their outfit is not only attractive, but fitting as well. red, blue and white goes so well together!

the Drumlines were slit in between the Cheer Dances so that the whole competition will be even more fun. they are not categorized though. the first impression of “drumlines” to me was.. they’d probably play something to match with songs played at old fashioned weddings. but I was wrong. they were awesome. to my surprise, they were equally as entertaining as cheer dances. @_@! 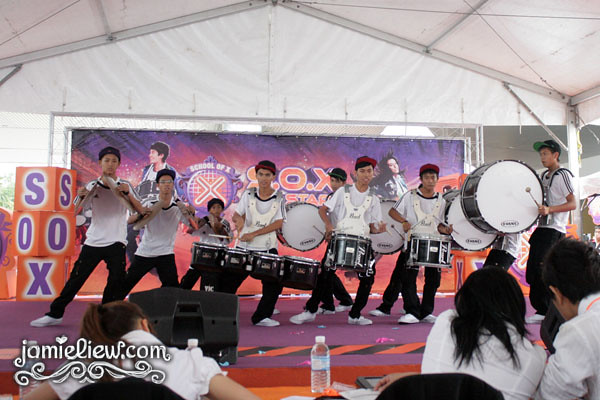 SJMMB Drumline from SMK St. Joseph, Miri won second place! they were very natural and… united? I guess that is the word. they have that strong bond that really shows their team work instead of just showing off their individual skills! 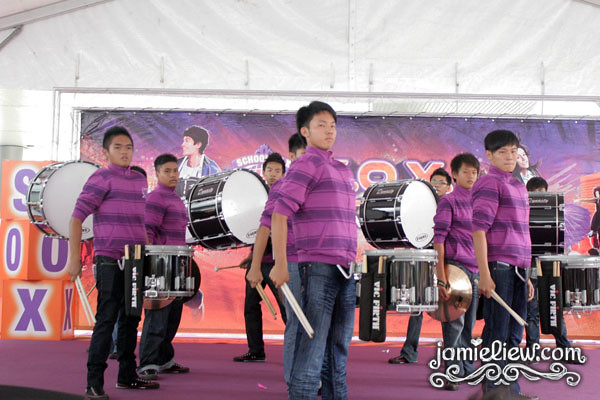 THE MACHO MEN/ Sam Tet Percussion from SMK Sam Tet! they look like baseball players with those gears under their jacket. it cracked me up a little when I saw it but I think it’s really cool because it boosts their confident look by.. A LOT. 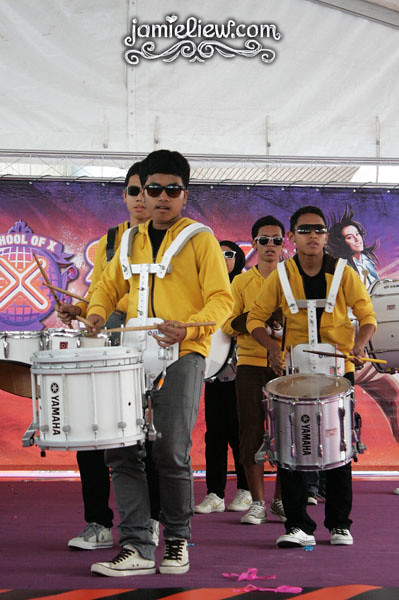 Sakti Drumline from SMK Sains Kota Tinggi! they were fierce, they were cool (the sunglasses proves it!) and they were absolutely fun. 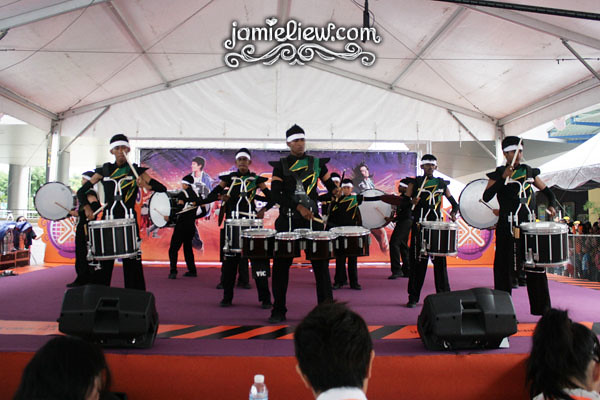 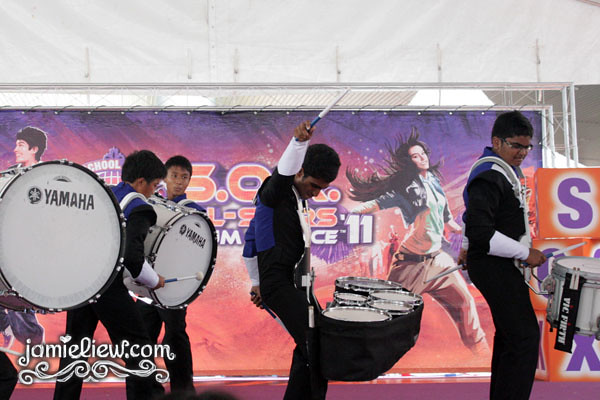 and my favourite. most of the drumlines had cool faces on them but PFS Drumline (Penang Free School) were all smiles! they’re really skillful already and plus those killer smiles, it really brings the mood up. they got everybody tapping their feet! 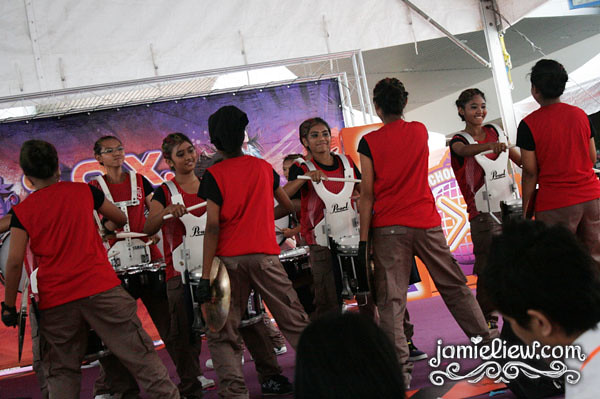 and then there were the PK sessions where two drumlines come against each other to compete. 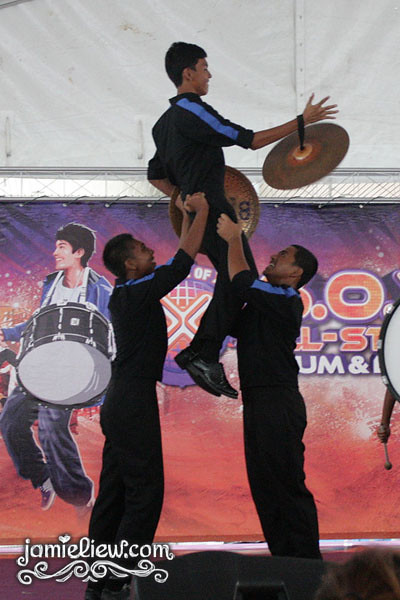 they were so different from their normal performance. they actually had all sort of witty ways to show how special they are! 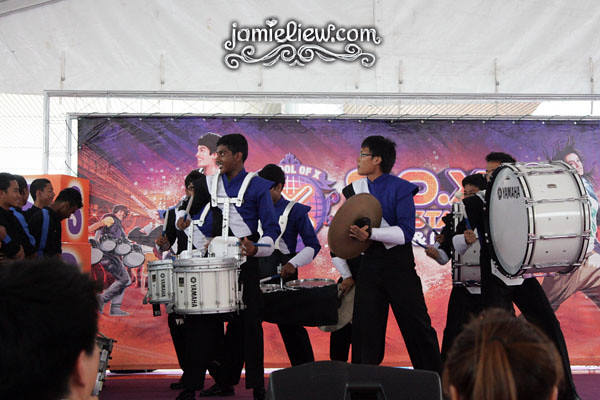 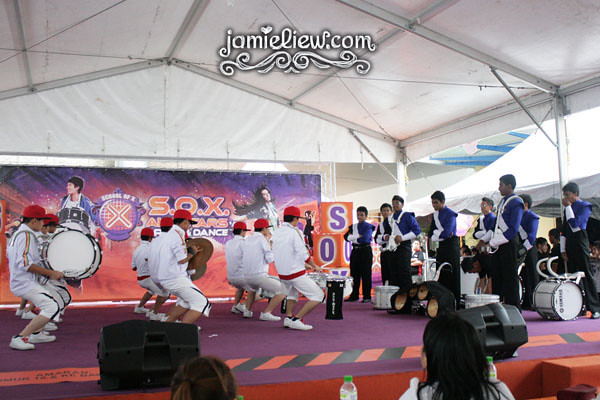 the organized ones vs the friendly faces. I am a fan of PFS Drumline. D=.

the organized one is Bruin Drumline from SMK Riam Road! they were really cute. when the drummers play the drums, their head move according to the beat. you’s just have to watch the videos to understand what I am talking about U_U. 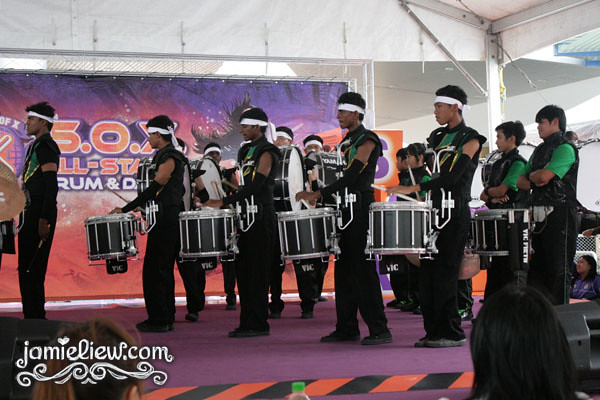 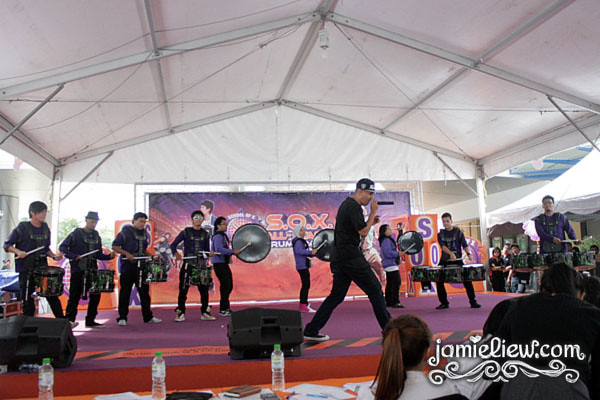 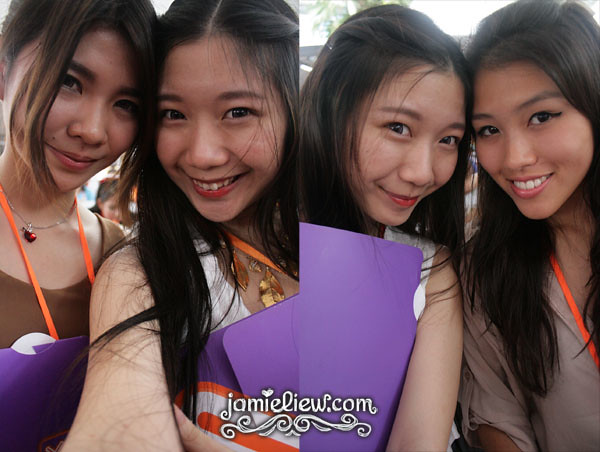 spam. teehee. it feels horrible to be sandwiched between two gorgeous girls really U_U. but also because they are gorgeous you HAVE TO camho with them. PFFT. 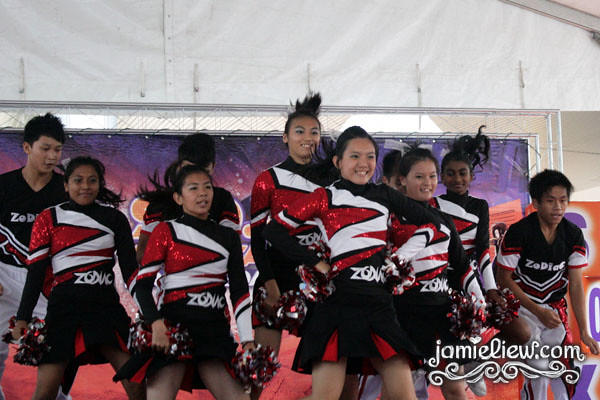 Zodiac All-Star from SMK Kepong! these cheerios won first place alright! they were such a good combination. their clothes, their dance steps and all. <3. 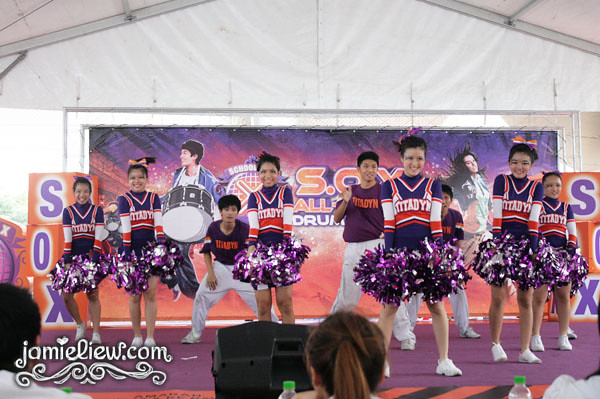 Titadyn! I have to agree with the judges, the guys outfit just couldn’t match up with the girls. U_U. but nevertheless, great performance! they won second place! 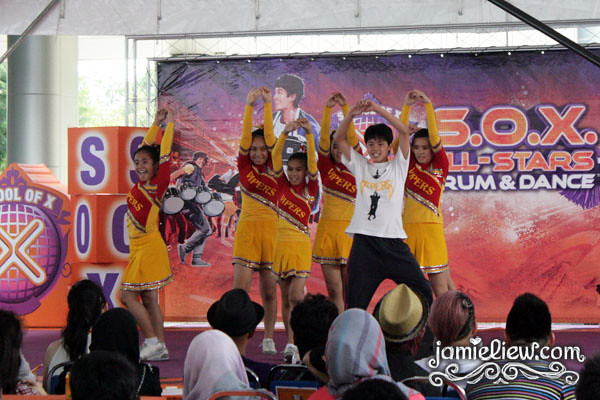 I bet you’re all mixed up with who won what and all. it’s alright, I’ve compiled a list here :

the world now is just so convenient. if you’ve missed the performances, you can now view it on YOUTUBE! click here for the official recordings and here for a pretty good compilation of drumline performances!

i just wanna let you know that the only girls team for the drumline is from MGSS Kuantan Pahang. METHODIST Girls and not from St George. Thank you.. hope you’ll correct it.. Just saw it by google