E-dae/ I-dae stands for Ewha Woman’s Univ. something like a shortcut name for it. Ewha Woman’s University is a very popular all-girl univ. and the shops near by sells clothes, food, etc. at the most reasonable prices; prices students can afford. and from what Natalie told me, shopping for clothes in E-dae is the cheapest. 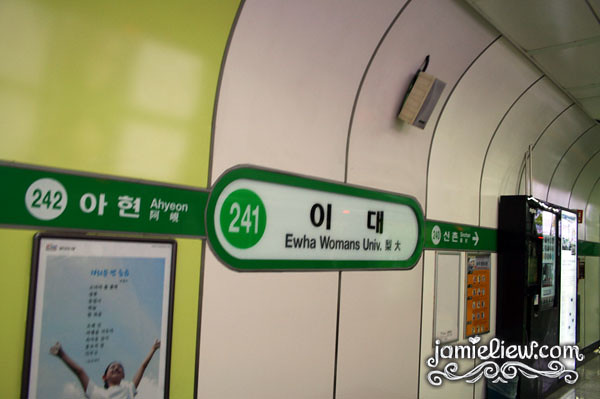 E-dae is right next to Sinchon, where Yonsei Univ. (the most beautiful Univ IMO) is. =D. walking distance, because I walked all the way from E-dae to Sinchon. about 1-2km walk. 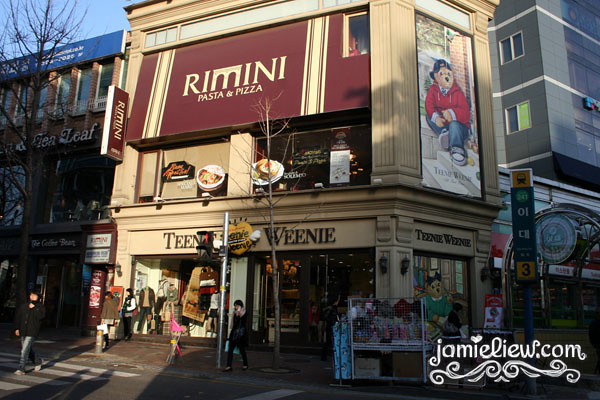 upon exit, you’d see TEENIE WEENIE! it’s like Ralph Lauren but the logo’s a teddy bear. guys wearing a Teenie Weenie polo is so adorable <3. I once saw this macho man in KLCC wearing one! <3.

as you walk towards Ewha Woman’s Univ., you’d find many street stalls around! 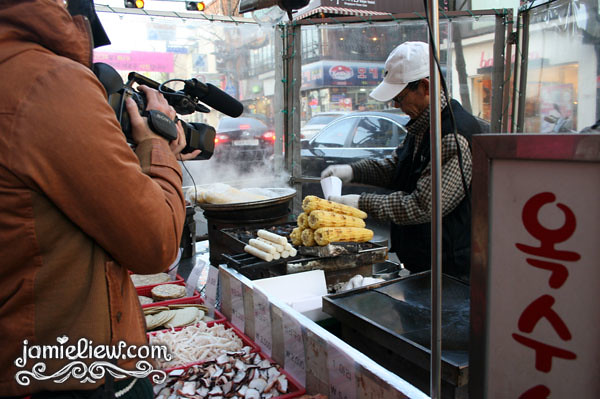 I wanted to try this one where some local television people were filming on him. seems to be selling BBQ-ed rice cakes and corn. 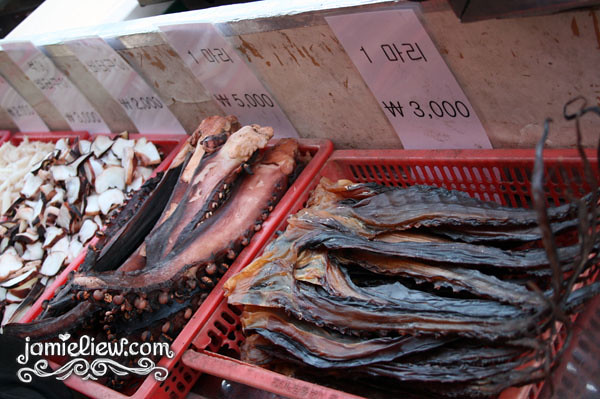 and a local treasure that I have found.. 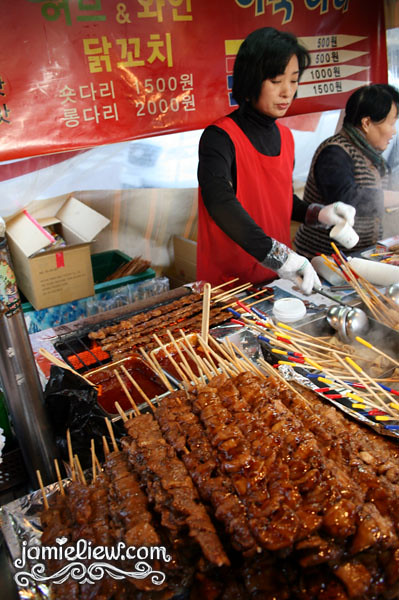 DALG GGO CHI 닭꼬치!! it’s the most HEAVENLY CHICKEN SATAY I’VE EVER HAD. you can have it spicy or not spicy, your choice. =D. I stopped by the street stall at Nami and tried a number of street snacks (3 of us had 30,000won/RM90 worth of street food X_X. Peter said he can eat RM100 worth on his own when he’s hungry zomg. never underestimate street food!) and still felt that dalg ggo chi is the best. 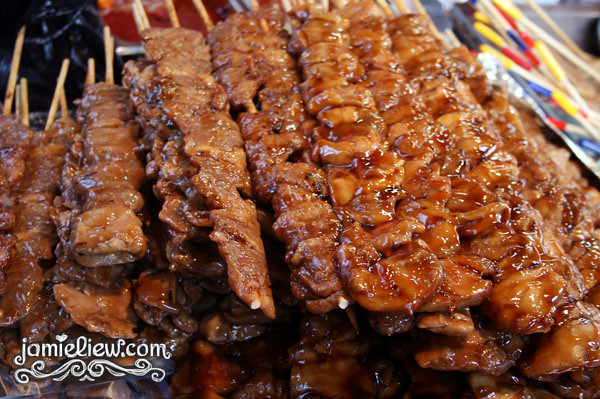 a stick of heavenly chicken costs around 2000won/RM6 =D. it’s a low price to pay to buy so much tummy happiness!! 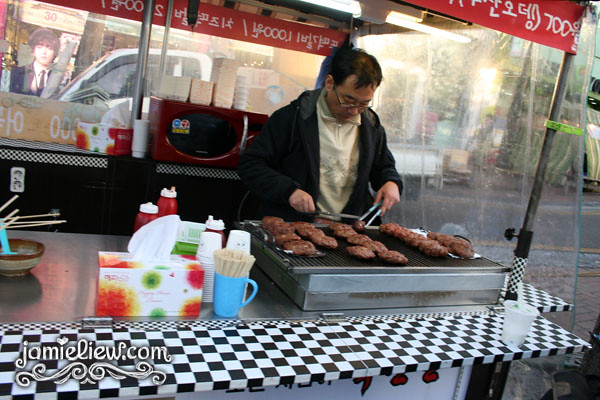 I was full and had no idea of what this was. looks like burger patty to me haha. 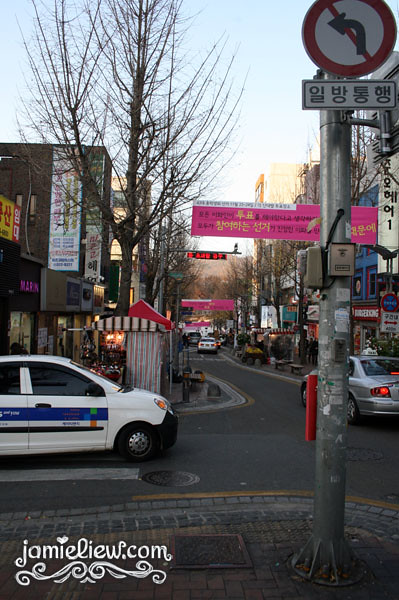 the winding narrow E-dae street. with bright pink banners. I like how they are so daring in colours. it just brightens up the place! =D. 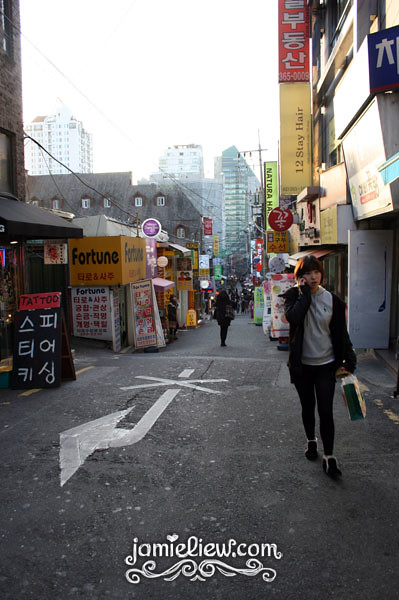 and every street seems to be connected by even narrower lanes where the number of interesting shops never ends. 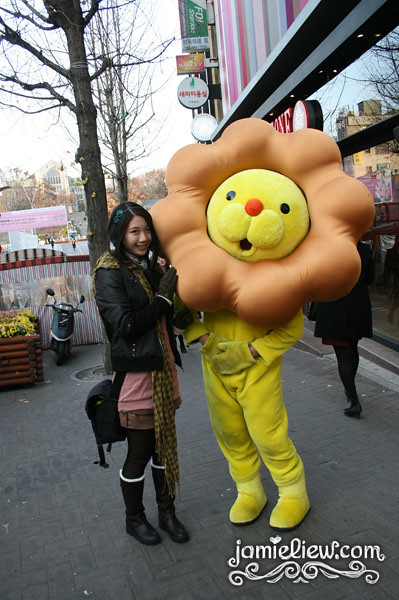 they placed a cute mascot running everywhere but at the same time the mascot didn’t give out fliers nor did it stood statically outside a certain shop. I wonder what’s the purpose but it’s alright, because the mascot’s really cute!!

and that shop behind me is COLD STONE. THEY HAVE COLD STONE RIGHT OUTSIDE THEIR UNIV.!! super lucky. I only discovered the phenomenal taste of cold stone until I went to Japan. pfft. but it’s a MUST TRY if you see the shop. remember, COLD STONE!!! 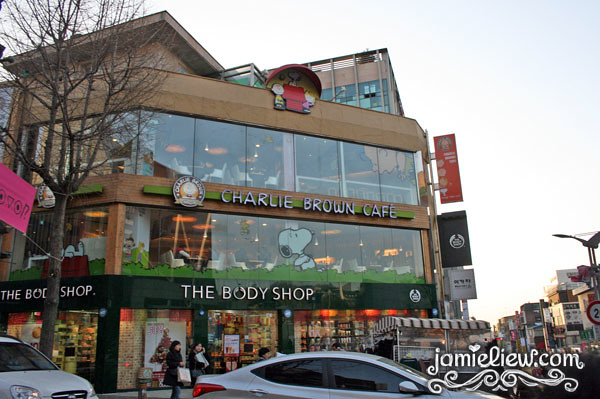 Charlie Brown Cafe! anybody’s a Snoopy fan? and Natalie (find her link on my sidebar!) reviewed about this adorable cafe! it’s so cute but time was running out at that time. pfft. it sucks to visit on Autumn/Winter because it gets dark really early. 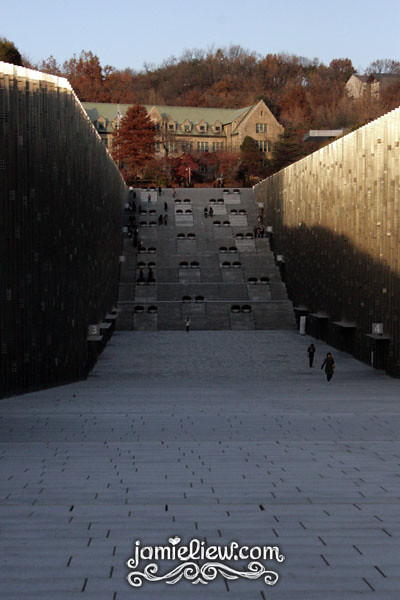 no idea what this is?? well, THIS is their UNIVERSITY. beautiful yet cool ain’t it? and those metal strips on the sides are actually their classroom, library, etc. the architect is mad. it’s like where modern meet traditional. 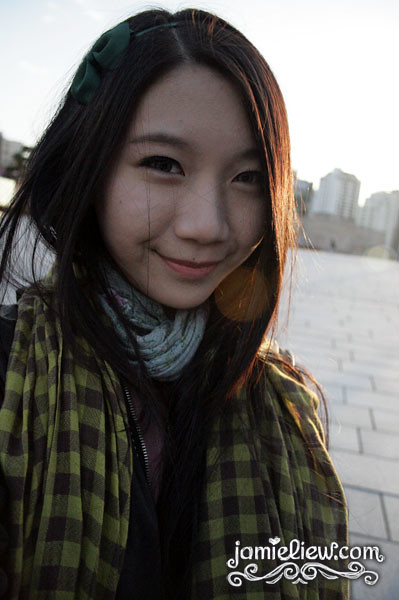 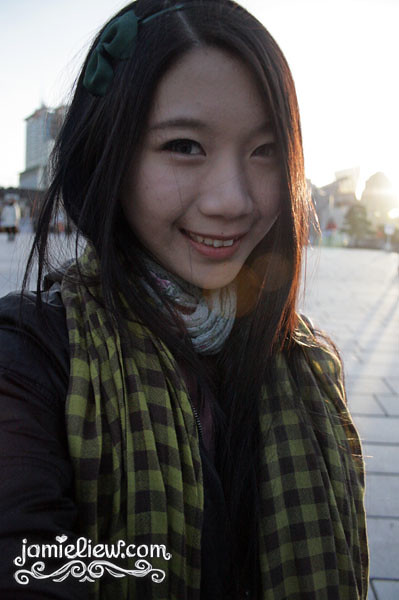 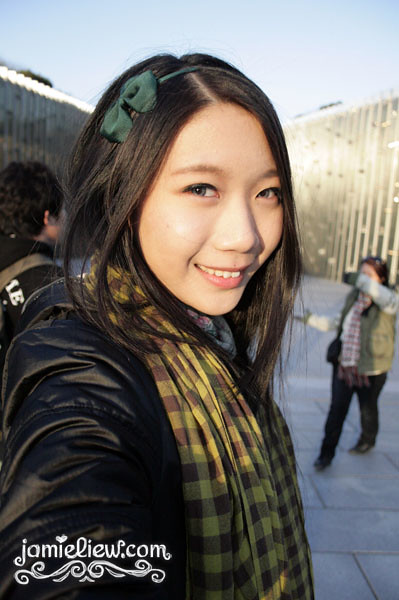 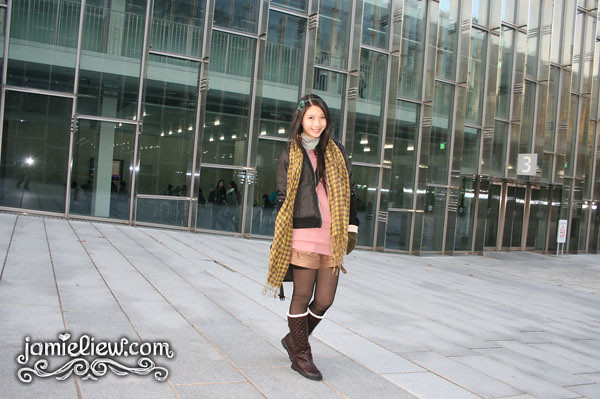 I only have this picture that shows how the inside look like T_T. anyways, it’s very special! =D. 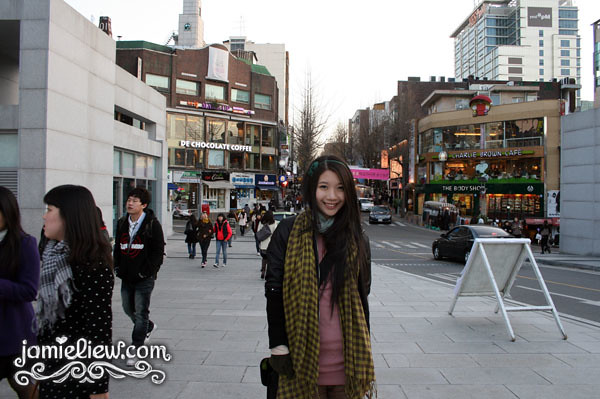 there’s Auntie Anne’s and Body Shop right outside. =D. if I were to study here I’d be bankrupt in no time. Auntie Anne’s an addict. and in Japan the line for it is madness. like at least 30 people in line on a weekday D=!!!! 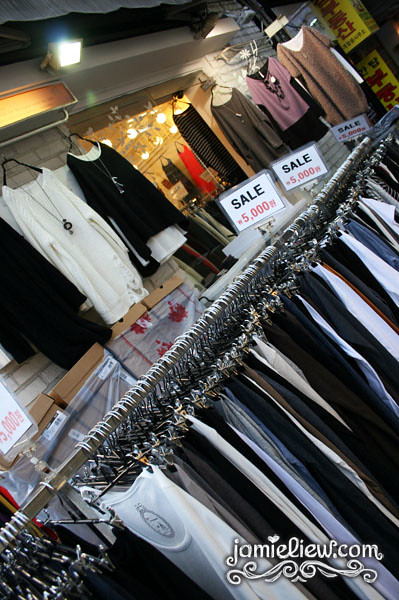 do note that it is like looking for a penguin in the desert if you want to find summer clothes in winter. haha. okay-lah. there ARE summer clothes but very hidden and little. not very nice either. =/. 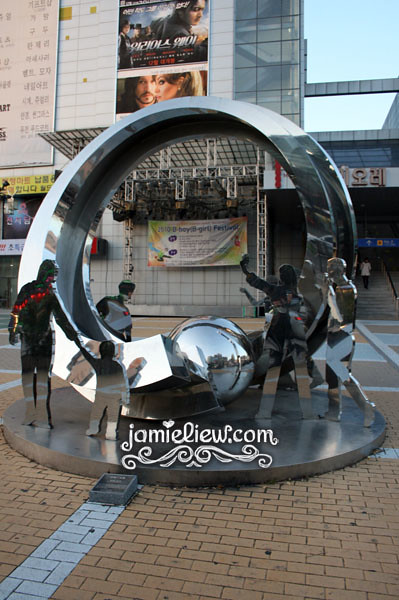 an installation right outside a Subway station. I have no idea of the name of this subway station. I thought it was Sinchon Subway station but there wasn’t any McD outside the station (Nat told me that I must try that BBQ buffet in Sinchon so I did!). 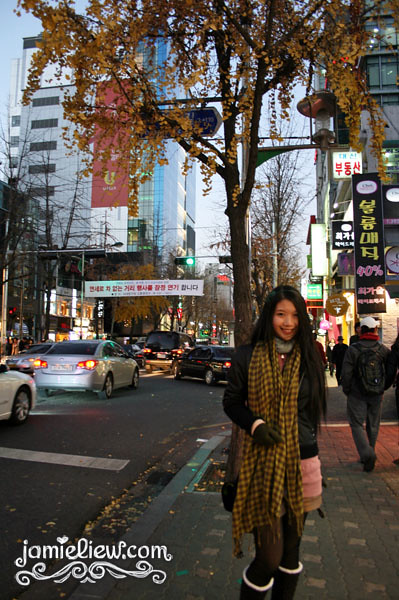 we then asked some local whom have guided us and we had quite a long walk (to save up 900won/RM3 PER PERSON!) and finally, SINCHON 신촌!!! 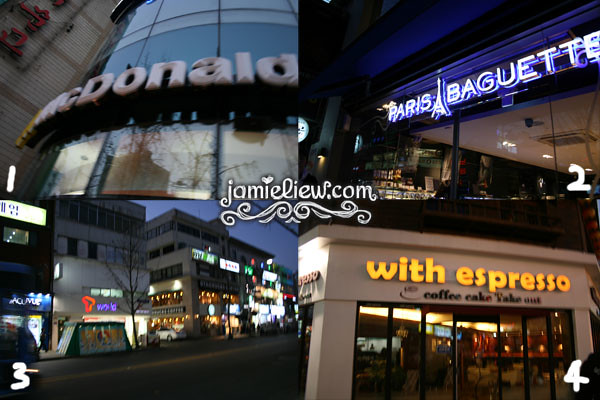 take the exit where it leads you to McDonald. then walk straight and along the way you’d see Paris Baguette (a very famous  bakery shop in Korea. prolly more famous than McD.) and shops like Addidas and all. walk straight until you see Starbucks and that shop with a huge T on it. 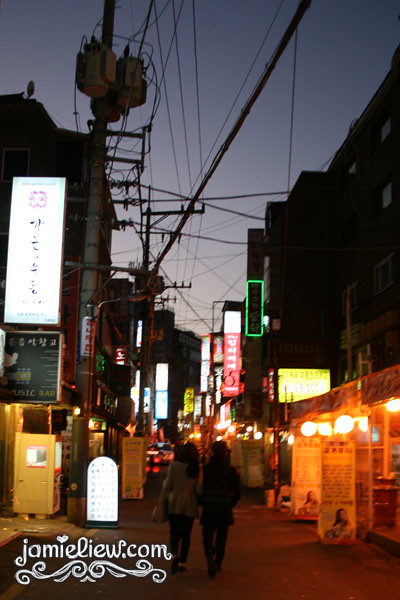 it was pretty dark when I arrived, it’s that shop with that yellow sign board. there are yellow boxes above the shop but because it was late so it ain’t noticeable. T_T. anyway, you’d see a HUGEEEE 8,000won (or a bit more if the price goes up) on their poster and you’ve arrived!! 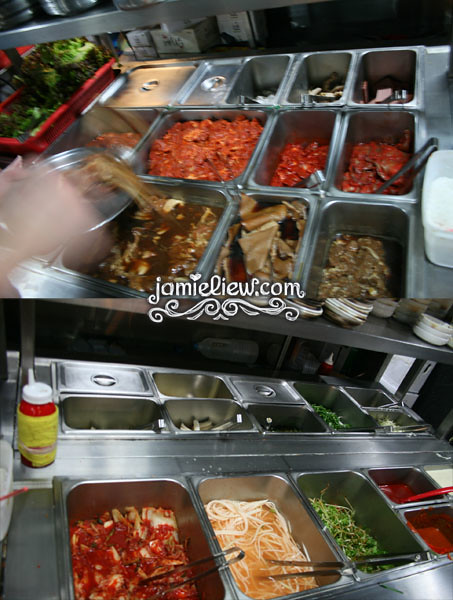 EAT ALLLL YOUU CANNNN. beef, pork, chicken, only at 8,000won! the place gets really crowded when it’s near dinner time which is around 7. 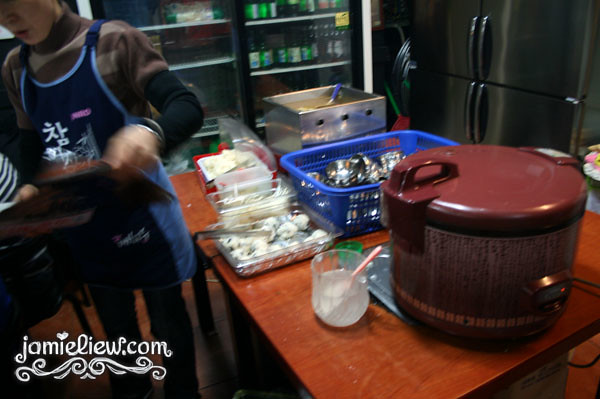 there are rice, rice balls, tauge, noodles and soup. pajeon too! but I don’t usually eat rice when I have buffet. it’s too filling.. and it’ll become not worth it. D=.

Peter said only Chinese people are like that pfft. as in, we must eat what’s MORE worthy. HAHAHA. 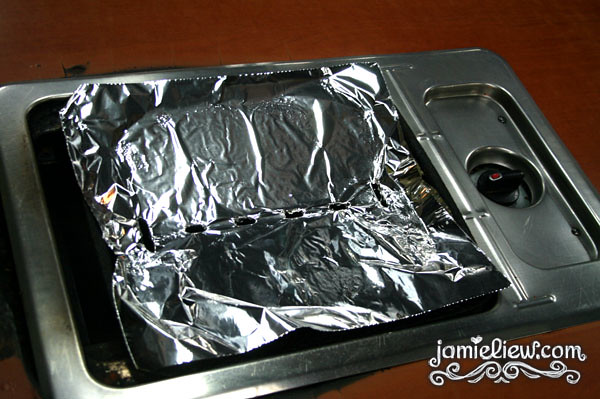 their witty way of puncturing holes on the piece of aluminum foil to let the oil released by BBQ-ing the meat drain. 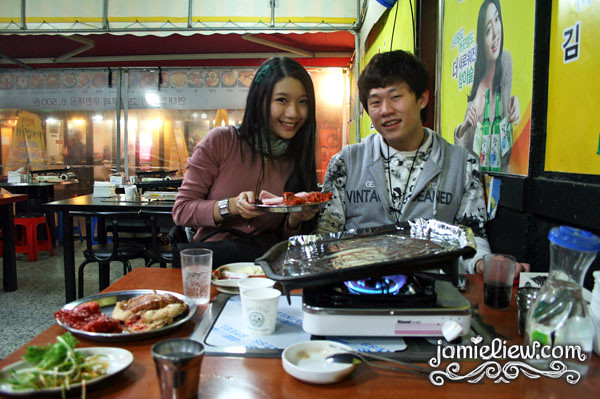 and this is the second type of witty way. haha. and this way, you’d see the amount of oil. it’s pretty scary. we had 2 cups filled with oil. eeeerk T_T. 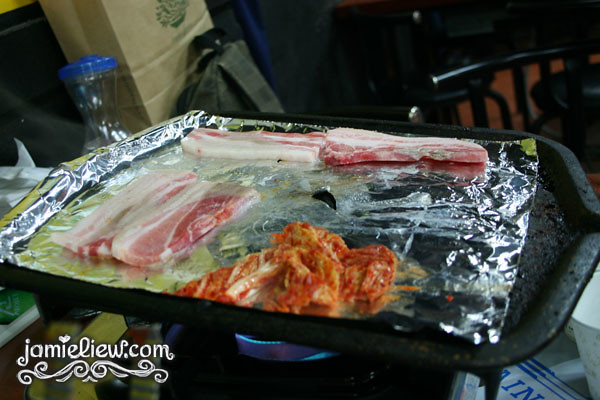 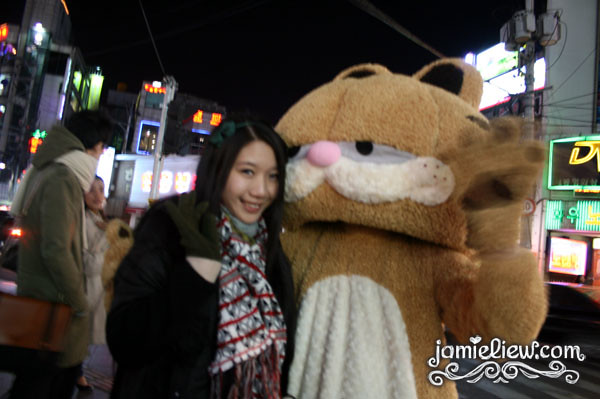 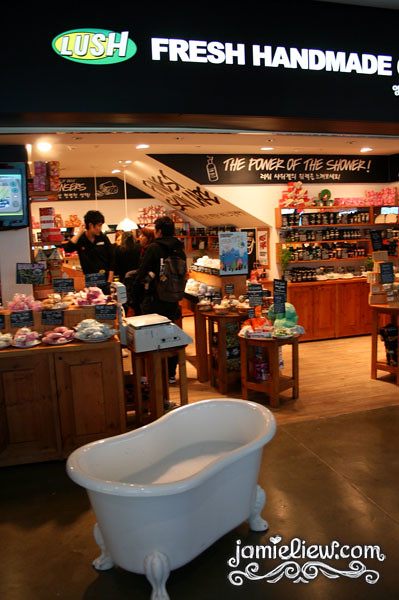 a bathtub installation art =D. the designers of Korea made Korea an even more special place. <3.

Hi Jamie, i only have 5 days in Seoul for my next coming trip, is this place worth visiting? TQ

if you only have 5 days in Seoul, I think you might want to skip this place because it’s more like a place to go when you have extra time =). it’s cheap barbeque and a little university tour. but the uni’s there are beautiful.

Hi Jamie! I will be travelling to South Korea this coming April. About the local food in Sinchon, are those stalls (like the ones u posted) easy to find around Sinchon? Any particular direction I should head to?
I am more interested in the local food u see. Oh, the bbq buffet, i read it from Natalie’s site too and will definitely go there.

Hi jamie, any idea what time does this BBQ shop open? I’m going Jan next year and would like to try it out.

So I am travelling to South Korea this weekend and i really want to try out the 8000won meat buffet.

Can you give me the directions to get there? (Getting off at Sinchon station.)

Hi Jamie, thank you for those pieces of info, I will print this so that I have a guide when I’m in Seoul. Is Edae shopping really magnificent? My 2 daughters are fashionistas and they like shopping for clothings both for office wear and casual wear. I will be staying in Jongno 3 Ga area, this is my 2nd trip next week, Oct 23. 2012 to Seoul. I can’t get enough of Seoul!

Hi 🙂 wanna ask, is it hard to find the clothing shop once u arrive in e-dae street? Thank you for the information as i will be going there for backpacking for the very first time 🙂 thanks

jamie.. i guess e-dae will be on my list.. ommo.. u describe it in detail, i should convince my friend to go there or i’ll just have her read ur blog.. u’r awesome~~