it’s been very long since I last updated about my personal life no? well, here’s 3 in a row! 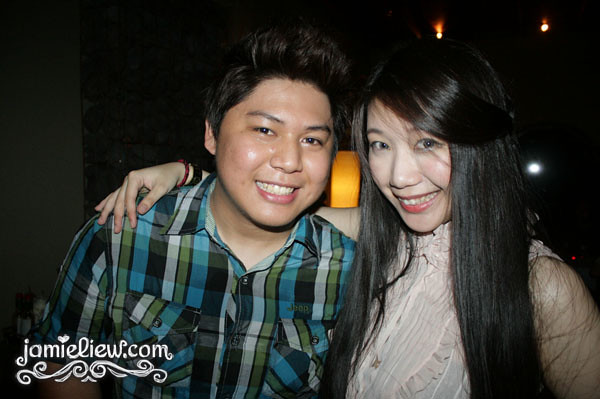 he downed two lambos that night. and also a lot of other weird stuff that involves a big hose? okay, I dunno what are those. don’t want to know also, and absolutely don’t want to try it. but he dropped on the ground twice. hahaha. it was a very good night for him indeed =P. 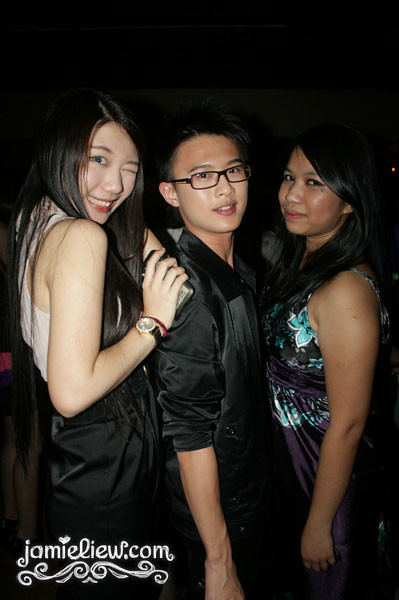 with Kelvin and Samantha. how could he have such good skin? JEEZ. 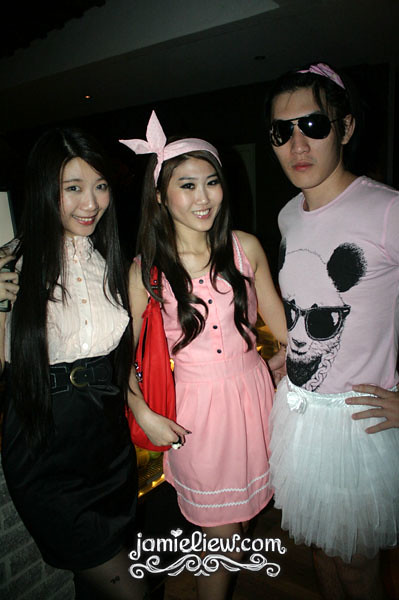 Kate and her BF. such an adorable couple!

you don’t need to rub your eyes. he’s in a skirt. AHAHAHA. his way of dressings really did crack me up for a bit =P. 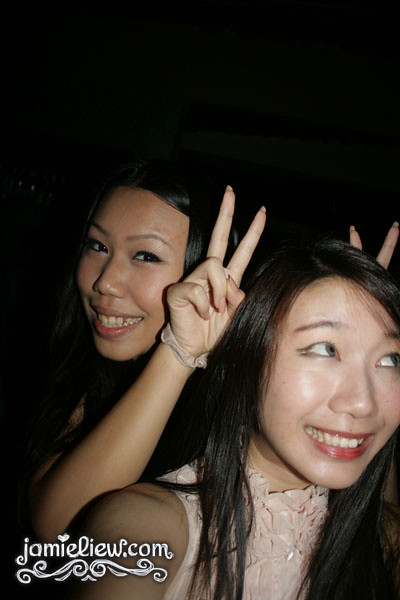 Mandy. and that was the first time I met her! I get along well with people. I make good friends with them instantly! SEE?! *COUGHS*.

last Saturday. it was a last minute decision. I went there without even knowing the dress code. and thank goodness I wore a gold belt and a dress.. seemingly gold in the dark. haha. and apparently there was a dress code for Jason’s party as well and I was told what I wore isn’t so wrong either? pure coincidence! 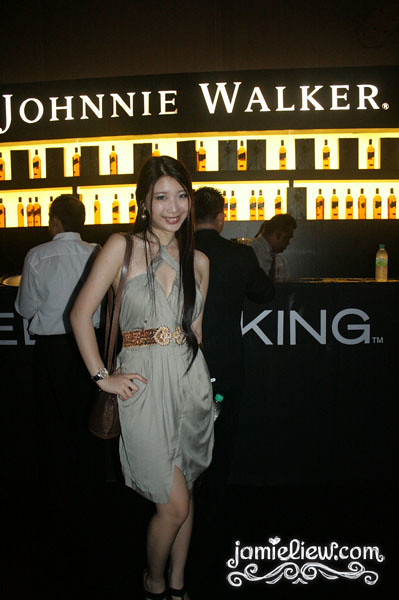 there were SO many bottles. I started of with drinking water and was BOO-ed by EVERYBODY T_T.

I didn’t get even a little tipsy in the end. I think it is because I drank on a fullll stomach. that’s the trick! really! eat before you drink and you won’t get drunk xD. 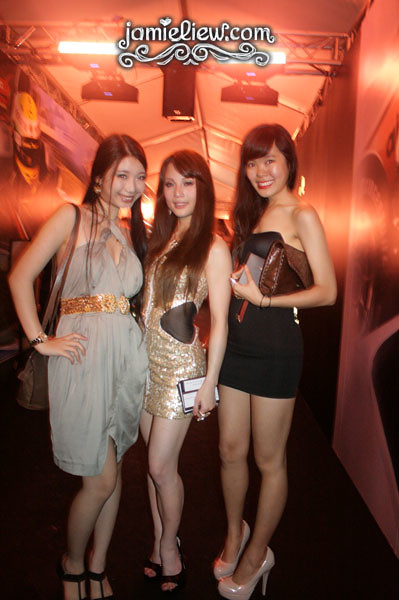 Hannah Tan! her dress was so bling. it was practically MADE for the event. black and gold! 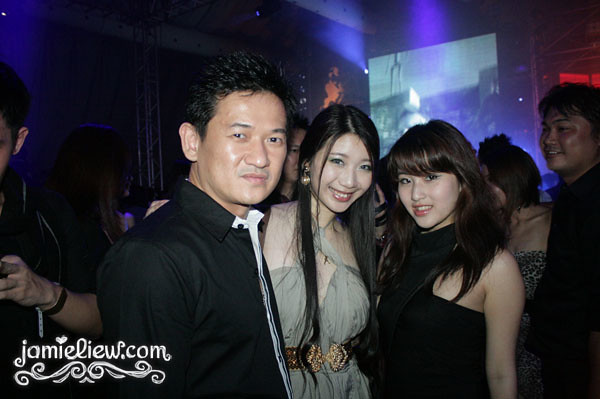 with Ginny and her BF. I still think Ginny is the prettiest girl from SSG. D=. you must agree. 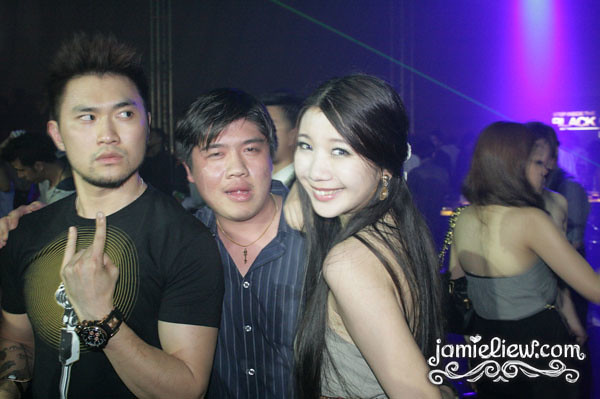 Dennis Lau– the famous violinist, drunk Tock and myself. haha. 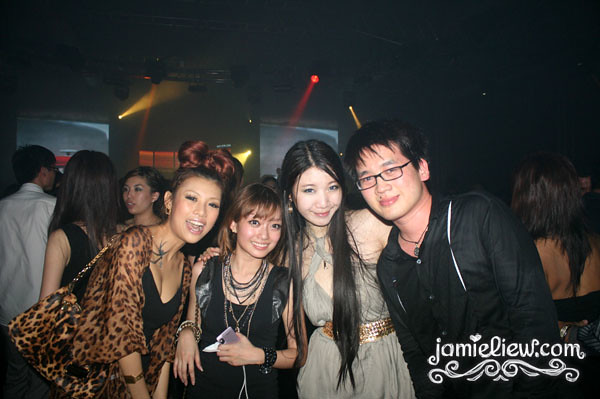 Ringo, Audrey and Timothy! the most famous bloggers in town! and Ringo’s hair is her real hair! JEEZ! all of them followed the dress code! 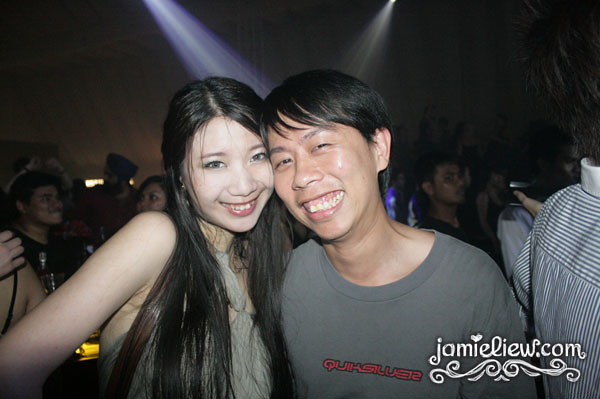 okay he didn’t. teehee. =D. partner in crime for the day!

KYspeaks. he blogs about food. but he’s so skinny. it is so. unbelievable. 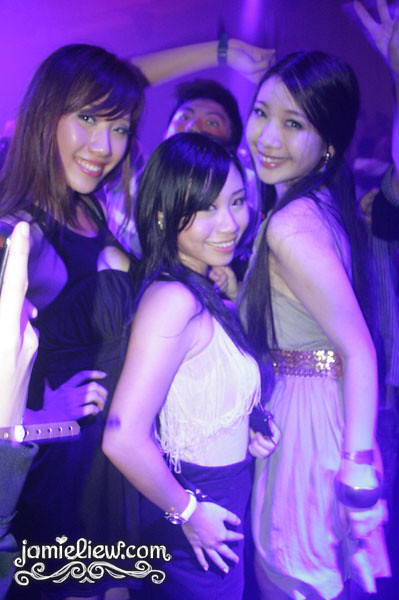 Cindy and Felicia. and Cindy’s brother, Eugene behind. haha.  it was awesome partying with them! I was never too fond of partying with guys actually.. I felt rather.. uncomfortable. unless it’s a really really close friend. haha. so having these girls to party with? it was absolute fun! =D. 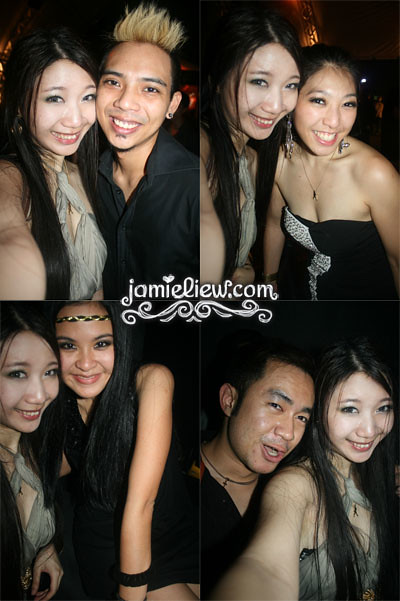 with the Red.fm DJ’s! Kenrick (okay, except him. haha. but he’s also from Red!), Linora, Mynn Lee (I’d click back to the very first few pictures I had in facebook and I’ll see her face. I can’t believe it’s been so long!) and Terry (be ready to tell him that you love him too!). if you listen to Red FM, it’s impossible to miss them.

and one more DJ. 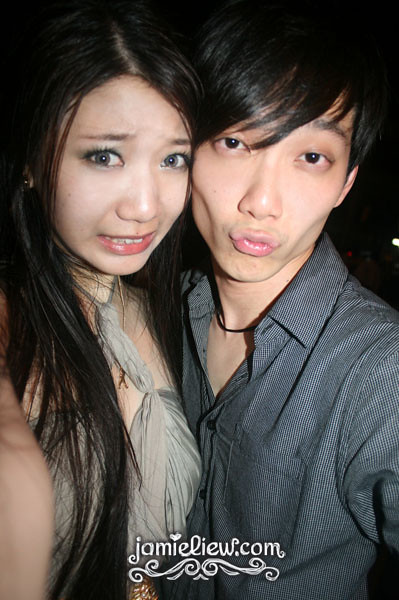 Jeremy Teo. say hi to my twin brother! he wasn’t drunk. he wasn’t. he was literally singing to each of every song’s lyrics. how can he be drunk? every event NEEDS somebody like him. =D. 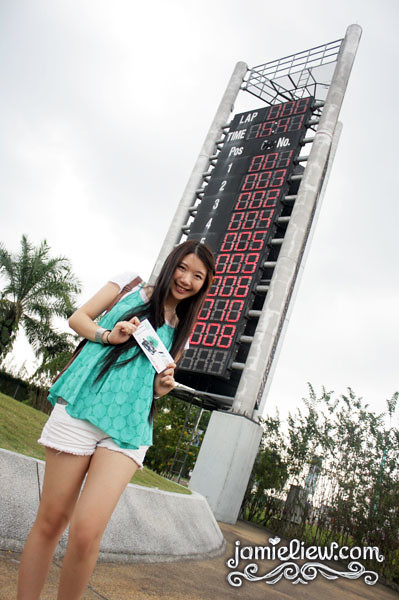 I have to say, sometimes dressing up accordingly isn’t what I have originally planned. I mean, I hadn’t even thought of it before. it’s a f1 concert, so I subconsciously took out the turquoise top I have and match it with a pair of white shorts. and you know what? do you remember what’s the colour of the PETRONAS logo? I can literally stand there and become the promoter of this event!

even the ticket matches my clothes! 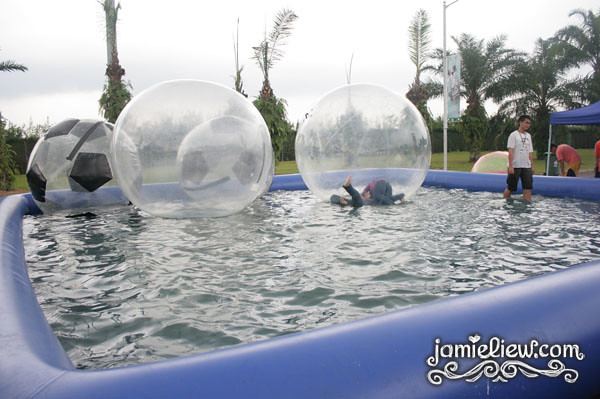 I really wanted to try this. haha. but I was afraid I’d get suffocated. imagine if you fart in there. there’s no way the smell could escape. HAHAHAHA. 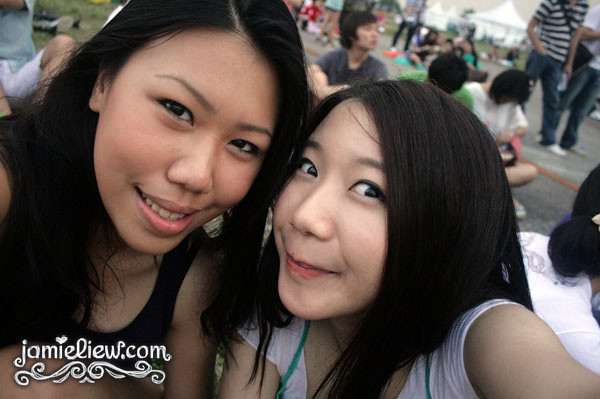 and I really have to thank Mandy (also another last minute invite!) for the tickets! I have always been very stingy in buying concert tickets. these tickets were at least RM190+. and guess what? we were right in front of Rain. D=. 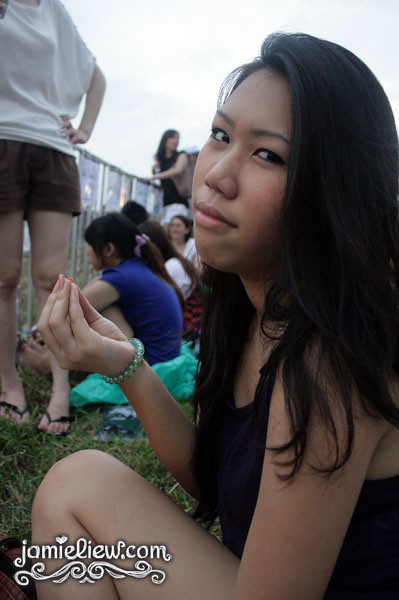 because it’s written the gate opens at 5pm, we waited there since then. and like a typical Korean concert, especially MALAYSIAN style. we waited until 9pm. T_T. and that’s what Mandy had to say about the wait. 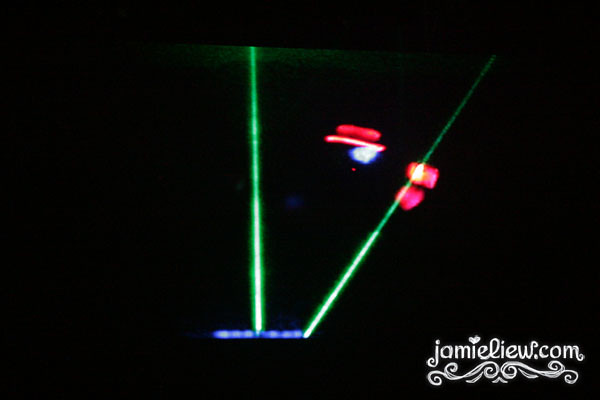 we thought RAIN was coming out but this came out instead. but it’s very entertaining. (I prefer Rain’s fan’s here over the other time at B2st’s concert. they were inconsiderate, rude, unfriendly and when the “star” came out, they vigorously goyang here and there like as if dirasuk hantu. worst is they treat every other girl like their love rival. it’s MADDD). Rain’s fan’s were really friendly, they give space to breathe and wouldn’t look at you like you’re their rival in love. 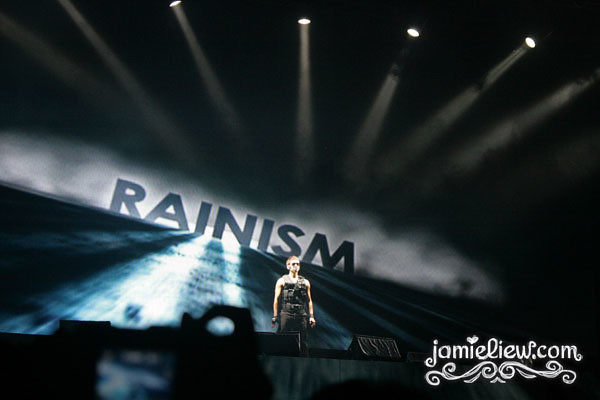 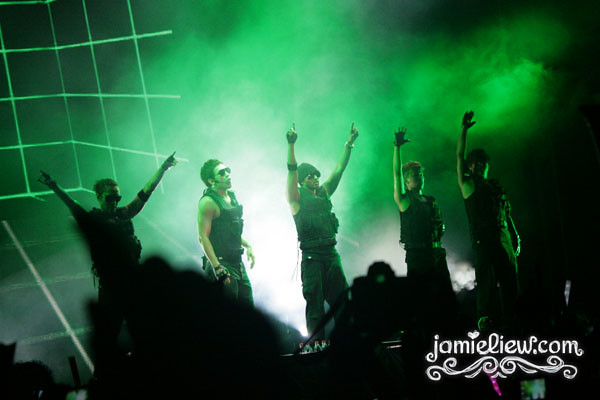 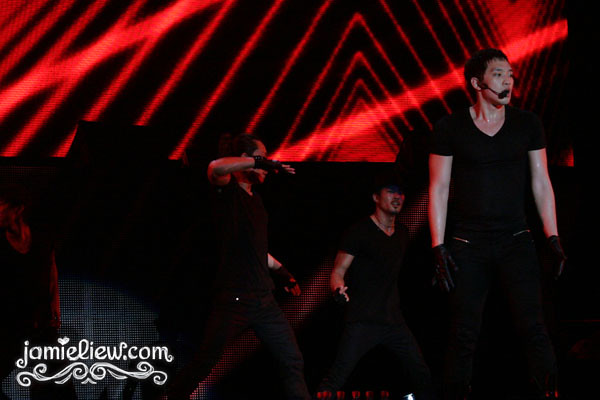 his awesome 6 paxs were so visible from his tight t-shirt. I was disappointed that he didn’t take his shirt off (muslim country, we must respect T_T), but then at least the shirt was only like a thin skin on top of his sweaty body. =P. 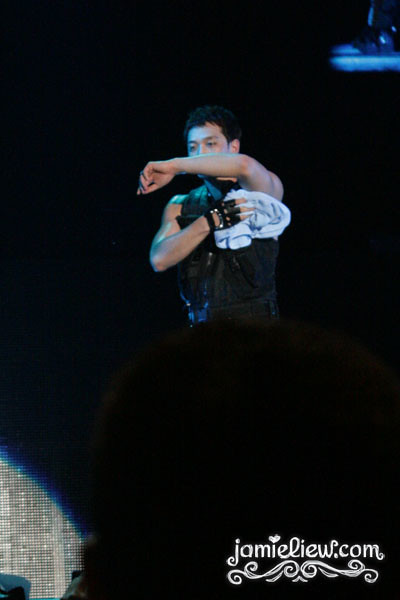 HAHAHA HE WAS WIPING HIS SWEAT AND THE CROWD WENT CRAZY! SO, he… attempted to wipe his armpits to see what kind of respond he got. AND the fans were still very keen on wanting his sweat-filled towel. it’s disgusting but very entertaining HAHA.

don’t you want to know how Rain’s armpit sweat smell like?

and yes, in the end he threw it. it was a little more to the right from my position, I COULD’VE CATCHED IT! =X. opps. 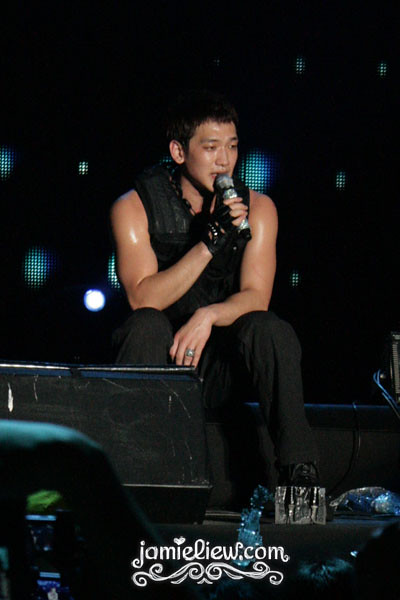 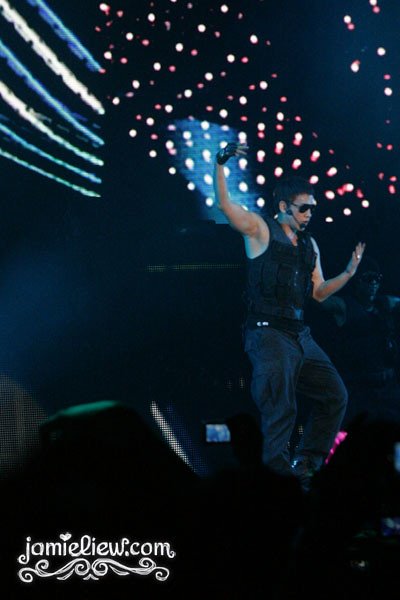 okay BYE BYE! =D. I have like 300 pictures. his dancers are really pretty and I’m really jealous T_T. maybe I’d put them up sometime soon. =P. *yawns* off to bed!

OMG, hope you didnt do anything with that Jeremy. He is super pervy i heard from my other friends and apparently he has STD’s…or some ridiculous thing of AIDS!!!