if you have watched “Mary stayed out all night” before, you’d know where did Jang Guen Suk hang out at. Hongdae. it was pretty late when I reached there ( around 8 ) and I didn’t have much time left to explore the place. but I gotta say, it’s an artsy place. every cafe there is SPLENDID. actually, not only the cafe’s there, but pretty much ALL the cafe’s around Seoul. the cafe which looks normal is the abnormal one there. but the thing is, there are much more cafes here compared to anywhere else!

Hongdae is basically around the Hongik University area and hence, you’d find many students. furthermore, it’s near Sinchon and Ewha, where two of the most prestigious universities are located at. so this street caters the students nightlife and also where they would hang out for a drink. 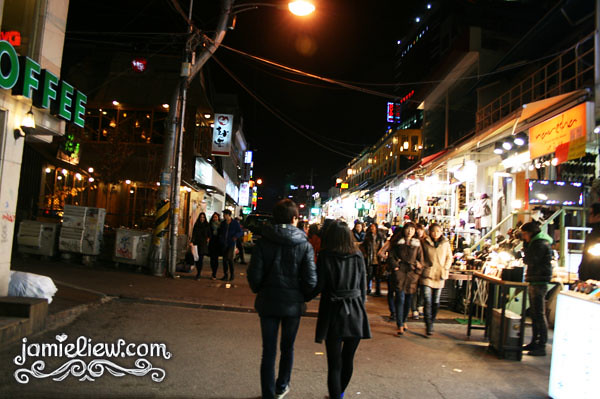 as you can see, this crowded street is not only a cafe, clubs and restaurant street but there’s also a WHOLE LOT OF SHOPPING. 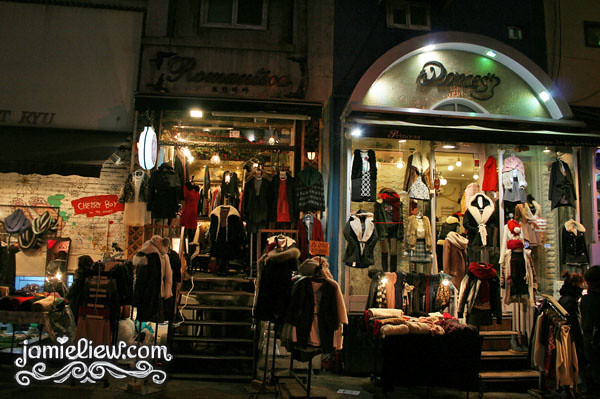 the fashion here is incredible. I wanted to buy those clothes so bad but they are all winter wear ㅠ_ㅠ.. so coming here in the summer is probably the best choice. but the thing is, the clothes here aren’t as cheap as other places. maybe because they are boutique clothes, but trust me, you can find something similar for a cheaper price over at Edae (Ewha Univ’s street). 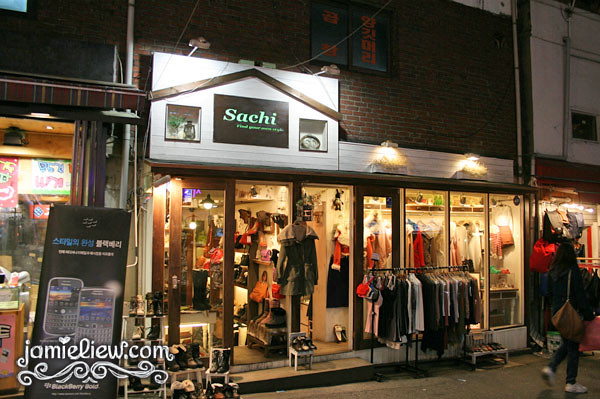 but seriously, sometimes, you should just grasp on to my moto, BUT IT OR REGRET IT.

wuwuwuwuwuwu you should know what’s my regret now. HURRR. 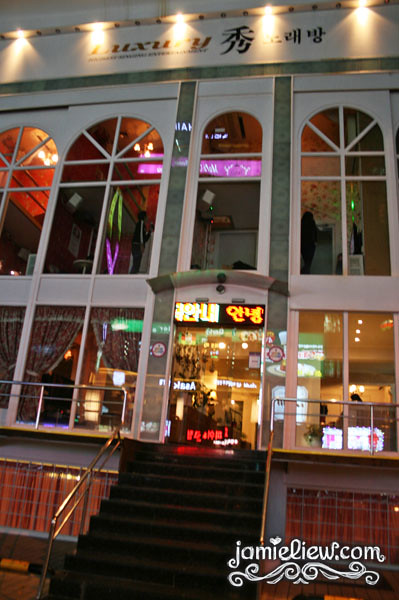 whats this? this is the famous Noraebang (Karaoke) in Korea, called LUXURY. there are plenty of other brands but I must say, ALL of them look good. and this one, you can sing to your favourite songs overlooking the great sight of Hongdae. and the price? pretty much the same with those in Malaysia, but they count PER ROOM instead of PER PERSON (which I think is absolutely stupid.) drinks are misc. I hadn’t been into one but I’m guessing the prices will be around 20k won for an hour? so there, the more, IS the merrier. =D. 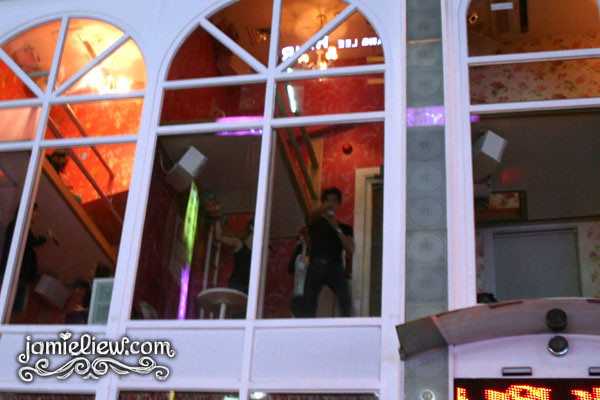 this picture made my day that day. really. I was really tired and grumpy at the end of the day because I had a hard time looking for Bauhaus (we looked for it for 2 hours FML!). I walked pass luxury for the 3rd time and decided that I must take a picture of that fella who pointed at me while singing with FULL OF EMOTIONS every time I walk pass!

I’m not trying to say that he is attracted by me. but actually I had been starring at him every time I walk pass because he looks pretty cute U_U. and I guess that is why I got the attention =D=D=D. he is really entertaining =D.

and did you notice that deck above? you can CLIMB up there and sing too! never wear skirt there though. =D. 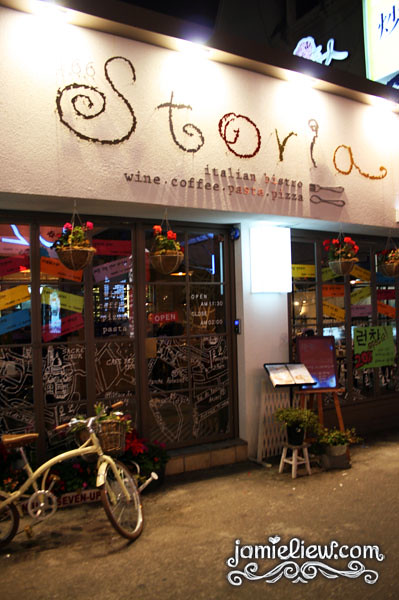 OKAY NEXT! remember about what I said about REALLY pretty cafes? here’s one of it. I love how they use white ink to draw on the window displays. many shop does that, but they all have their own style and it’s really attractive. 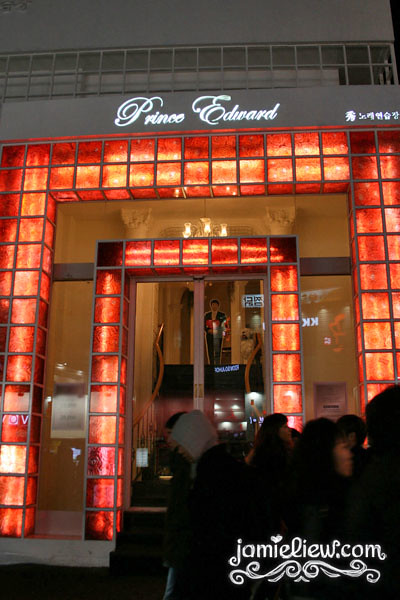 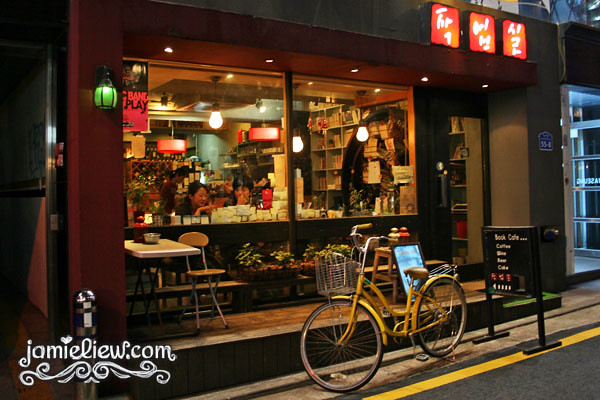 it’s funny how they all put bicycles outside their cafes as a decoration.. or not. and I can just STARE at the decoration of this cafe for hours. IT’S SO PRETTY T_T. 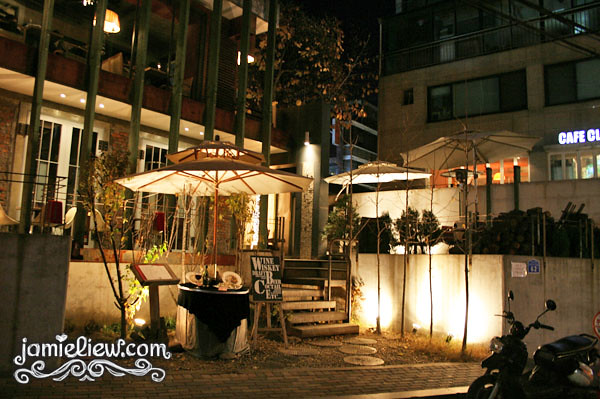 *dies* you bring the most BEAUTIFUL cafe you’d find here in KL to Hongdae, and it’ll probably be one of the most ABNORMAL one. because it looks too normal. D=.

but the ones at Changkat is slowly upgrading! tsk tsk I am so proud! 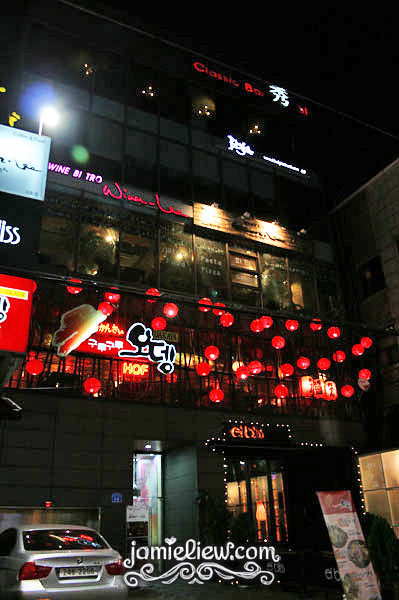 one thing I’ve noticed there is the DECKS of restaurants. there are 5 floors for this one and all of them are seemingly very good in business that night. you’d see people taking the elevators non stop. 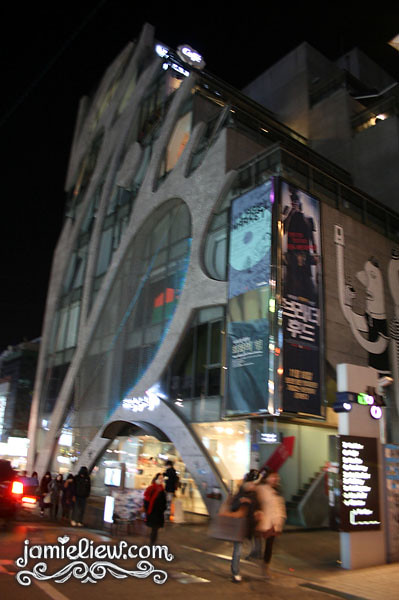 the most artsy building in Hongdae! it’s called the Sang Sang Ma Dang. I did not go in I don’t know why was I so stupid at that time pfft. it looks like a butterfly really. inside, there are all type of room installations and small little creative products. you should really take a look. after what Natalie told me about it, I REALLY FELT SO STUPID FOR NOT GOING IN WHEN I AM AN ART STUDENT. PFFT. 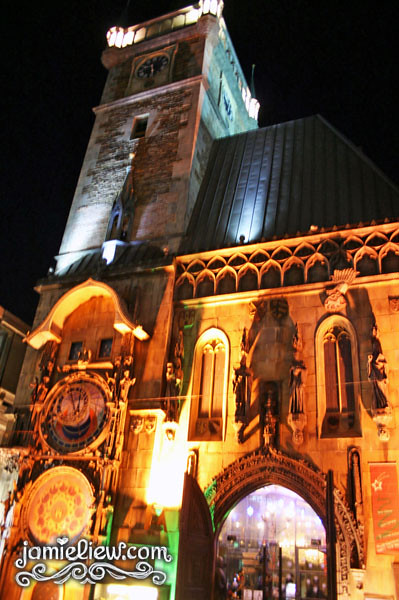 I was so amazed by this building. I wonder how many billion won was used to build this magnificent building. it looks exactly like what I think I would see in the city of Prague (in Czech. pls google it. it’s one of the only places I want to visit in Europe. I am more fond of Asia. IDK why.)

and Natalie said.. IT’S A HAIR SALON. WTH? a HAIR SALON looking like a building in Prague. it keeps me wondering if the hair stylists are angmohs. I don’t know how they relate the building to hair styling. but it is FABULOUS. 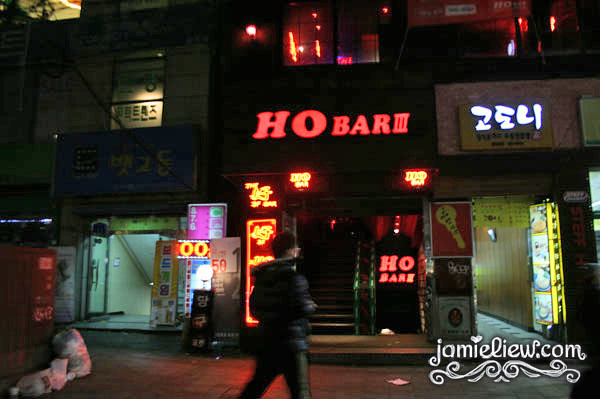 there was so many of this particular bar I had to take a picture of one of it. see? it’s HO Bar III! Korean people really do love drinking. 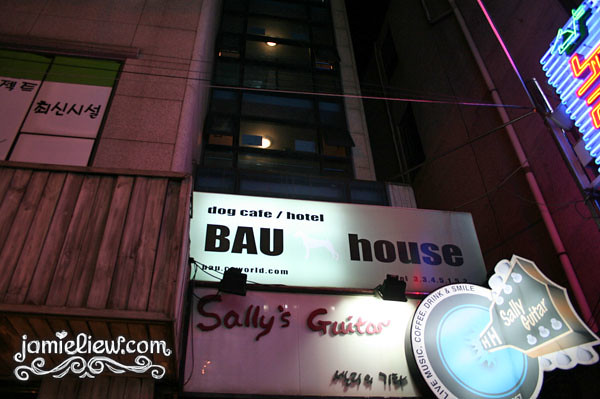 so, finally to my destination. BAUHAUS. it was so difficult to find. but because I thought it would be along the Hongdae street so I just walked and walked and walked (for 3 rounds). asking people there won’t help, they’d always forget where it is T_T. but nevermind, now that you have me. let me tell you. 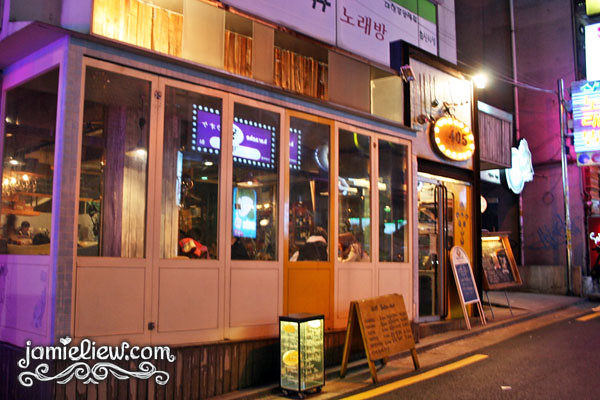 bauhaus have moved! hapjeong exit 3! u-turn upon exit and walk into the alley on the right. 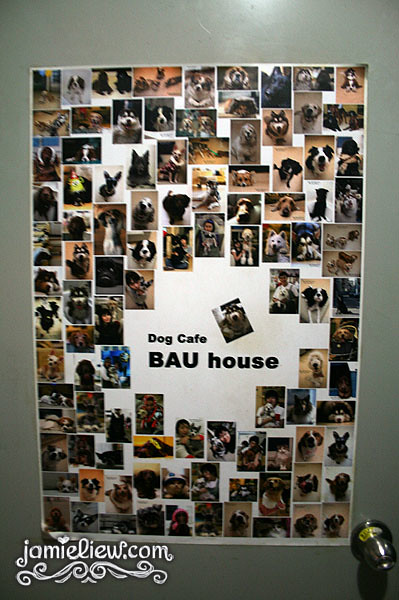 take the lift right up and there, THE DOOR TO THE DOG HEAVEN! 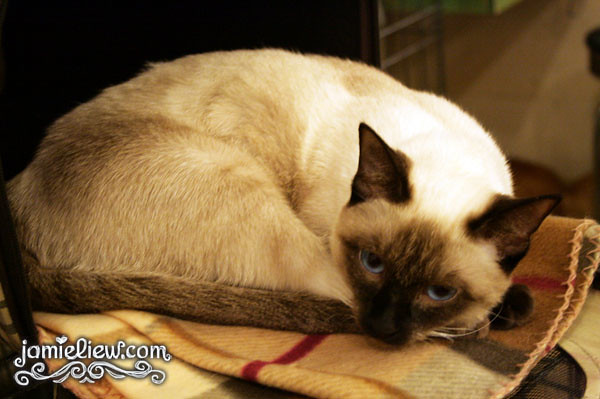 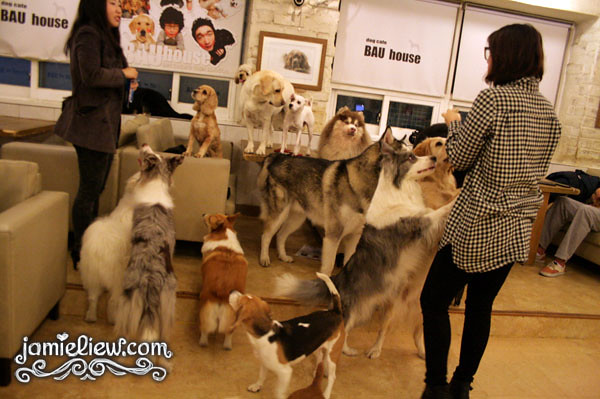 THE NUMBER OF DOGS YOU’D SEE!! first they would pound on you so you might feel a little scared if you have never had a dog before, but it’s alright! they are all friendly dogs! ( I used to have a Pomeranian =D.) 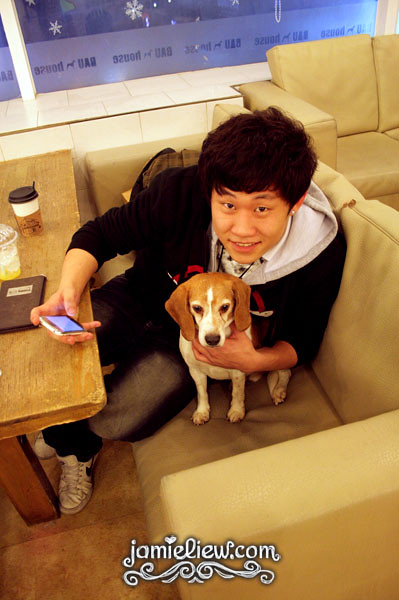 Peter wasn’t very fond of dogs, but after being there, he found his best friend. tsk tsk. that dog literally sticked to Peter! so adorable T_T. 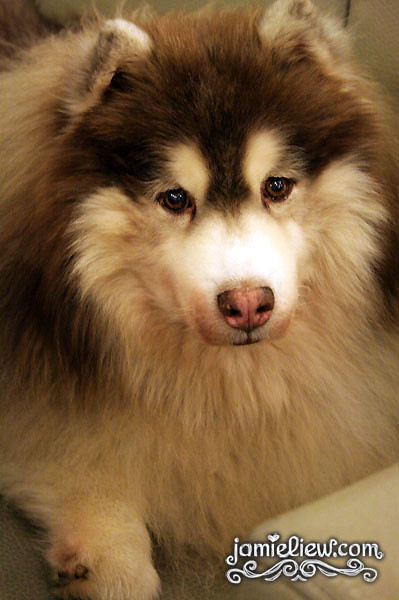 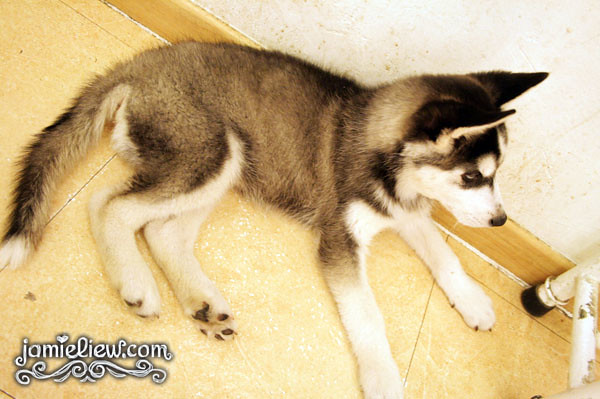 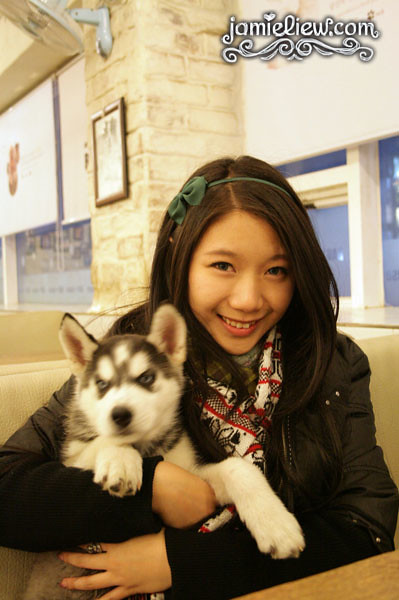 he has mesmerizing blue eyes. but would never stay still. PFFT. 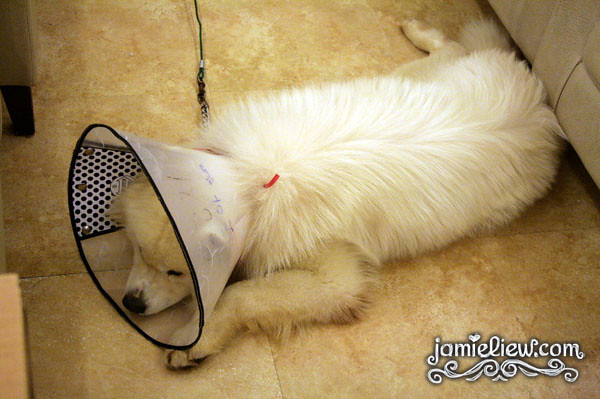 and for the “still training” dogs. poor guy having a cone on him =/. 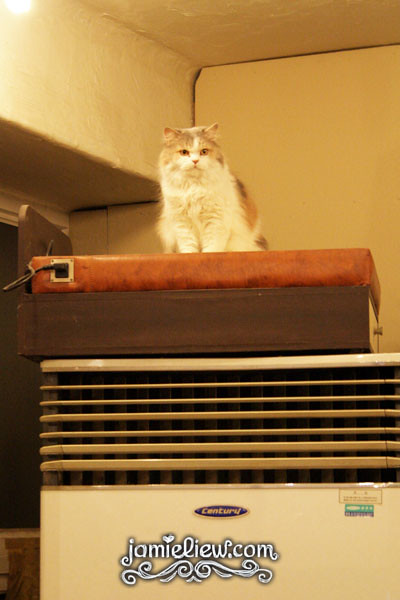 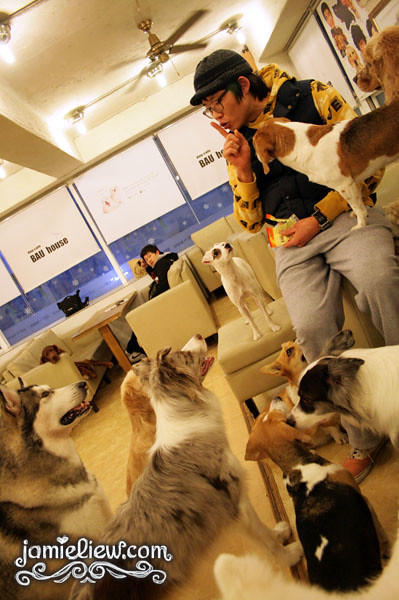 some people hanging around here are actually the owners of some of the dogs! not ALL dogs belong to the cafe I guess. some people just put their dogs here to let the cafe owners to look after while other people get to play around with their dogs! good idea in my opinion, and they’d have so many friend! 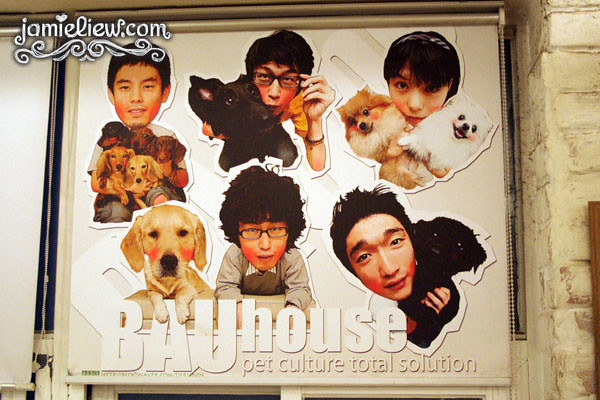 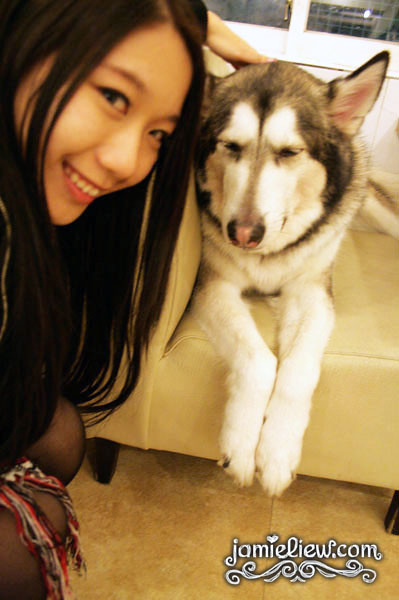 I remembered the first time when I met these big husky’s. it was in China and I keep telling my dad that “THAT MAN IS RARING A WOLF!! IT’S A WOLF!” my dad kept telling me it CANNOT be a wolf and we had a bet. he went and ask that macho owner (it’s really like how you’d look like your dog. that owner looked equally as fierce pfft) and the owner said it’s a Siberian Husky. BUT IT WAS AS BIG AS A WOLF I SWEAR! 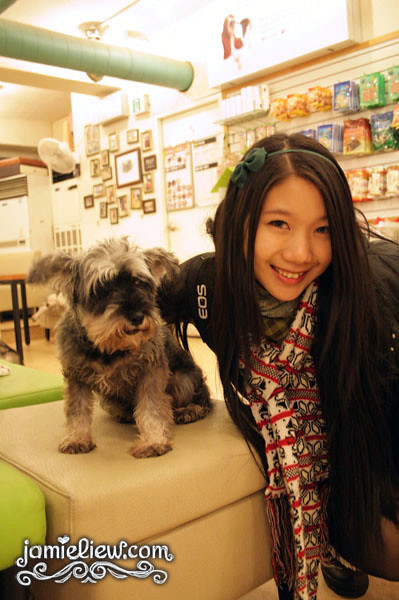 it was pretty sad that I found the place so late and the dogs were… mostly tired. U_U. some of them were even sleeping! but this Schnauzer is very active =D. 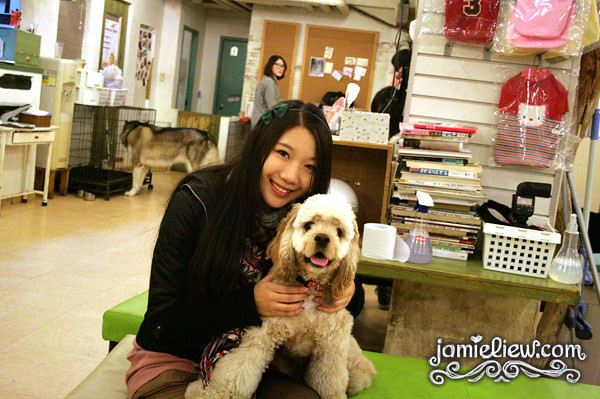 Poodles are so cute T_T. they are so loving. and especially if you buy them food, THEY’D STICK TO YOU.

this cafe, the drinks is all at least 5,000won each and they give you a limit of 30minutes. you can stay longer, but you’d have to pay a small amount of fee. or, order another drink. haha. I think it’s really worth it. it’s a small price to pay to buy this much happiness! (my mom was so grumpy that night because we couldn’t find it and she kept asking me to give up. but AS SOON AS she SAW THE DOGS, her mood changed 180degrees. it’s mad. haha.) but dogs are rather playful, so it’s better to keep any small objects. and there’s no food served because the dogs climbs on the table. =3. 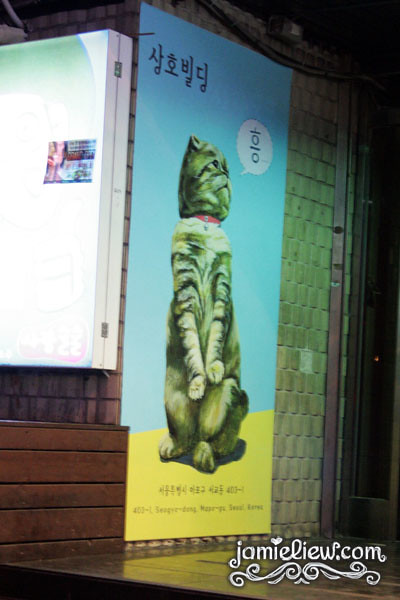 latest update : a video that I kept long ago. I totally forgot about it! hope you enjoy it!

PS : they have moved to Hapjeong. get off Hapjeong Station exit 3 and you will see it. =).

Google brought me here to your blog when i search for BERSIH XD.
Saw few of your korean photo that you took in several part in Seoul , it looks great..

Anyawy , just to drop by and share some korean site that you might find it interesting.. hope it does.. wee !

I m visiting korea in dec, by chances do you have the address of BauHaus? I Loves dog! wish to visit this place. It does not seem to be easy to find.

Hi! um. I seriously don’t think you’d be able to find it even with the address. =S. just follow the directions I gave above and you’d find it =D. just remember. CONVENIENCE STORE!! it’s like the only convenience store there. =).

Thanks~ I will keep in my mind…. btw will they entertain a non speaking korean foreigner? bit worry as I will be travelling alone.

they will. =). it’s just that it’ll be a little difficult if you’re asking for directions or taking the cab. =S. if you could, you should really find somebody to accompany you.

WOW, i never knew there is such cafe in seoul! or else, i would have pay a visit. my girlfriend is a fan of animals!! haha should have read ur blog earlier =)

Here the address for Bauhaus Dog Cafe to put it in the GPS: 405-13 Seokyo-dong, Mapo-gu, Seoul,

Hi, so do i alight at hongik university station and then walk towards the hongdae exit? Is there an exit number for it?(:

i gotta say, so happy to have found your site as it has been very helpful in determining the route to bau house. have spent quite some time online trying to see how best we can find the place as my friend finds it pretty challenging locating the cafe. we’ve both been to hongdae before but he was able to go to sangsangmadang, i wasn’t able to so thanks to your map above, he would be more familiar with the place.

thanks again and keep it up!

Hey very nice web site!! Man .. Beautiful .. Amazing .
. I’ll bookmark your blog and take the feeds also? I’m glad to seek out a
lot of helpful information here in the post, we’d like develop more strategies on this regard, thank you for sharing. . . . . .

Am in seoul this very moment, staying in hongdae gusethouse. Glad to suddenly found ur site. A big help to go to the dog cafe