[Tokyo: Shinjuku] A Night in Shinjuku

I was told that  Shinjuku is probably the most dangerous place in Tokyo. why? well, it has a lot of foreigners here, so you’d have to beware of pick pockets (but this is NOTHING compared to many other cities) and… well.. read on and you’ll know. haha. 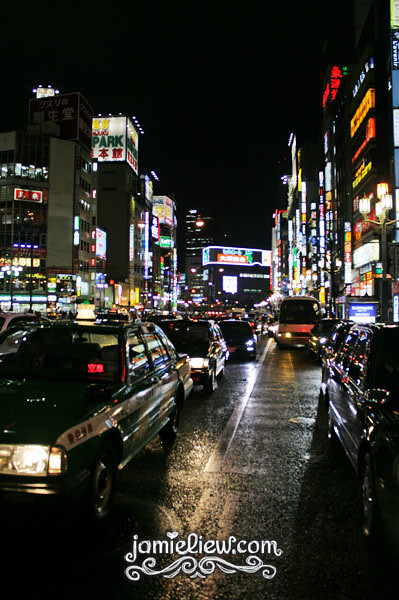 Shinjuku’s road. the Shinjuku-Eki (station) is no doubt VERY HUGE, but never hesitate to ASK around to get to the place you want to =).

so before I go into the what I felt is a total culture shock to me, I’d like to tell you about the most delicious doughnut I’ve ever had. BETTER THAN JCo. it’s true. 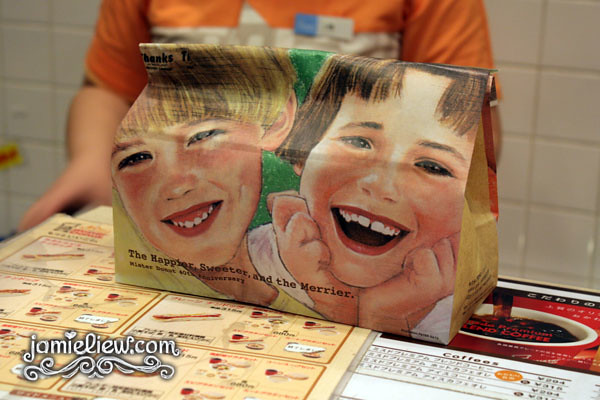 look at the adorable paperbag! <3.

and it is called.. MISTER DONUT!! 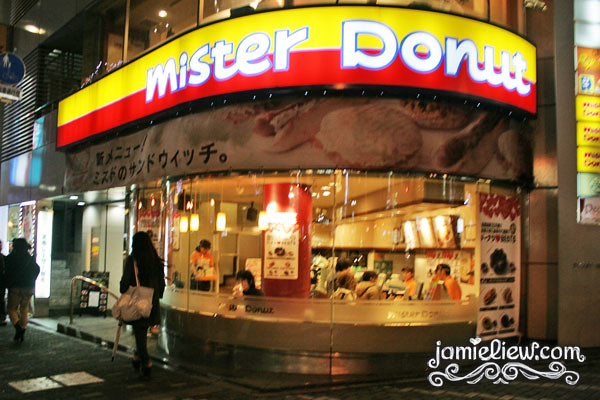 it looks a little like McD to me. haha. 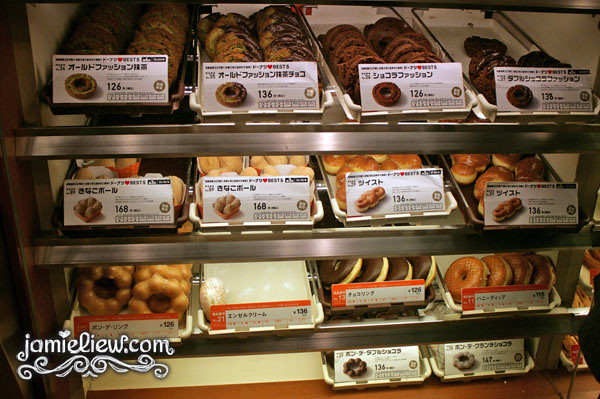 the varieties of donuts. it’s so good. SO GOOD. 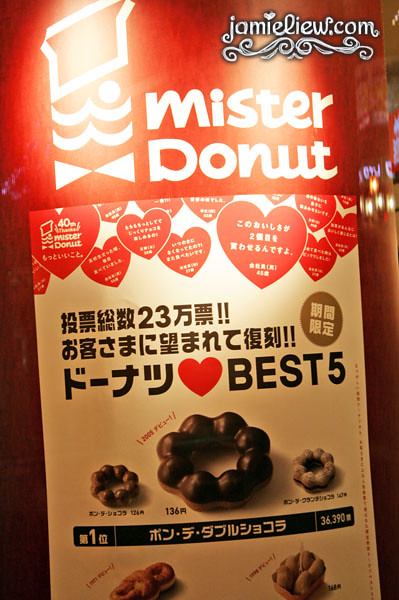 those ring ones are the BEST indeed! it’s so chewy. you’ll have to taste it to know. <3. best of all is, it isn’t too sweet. just right imo. I can have 10 of these, really. 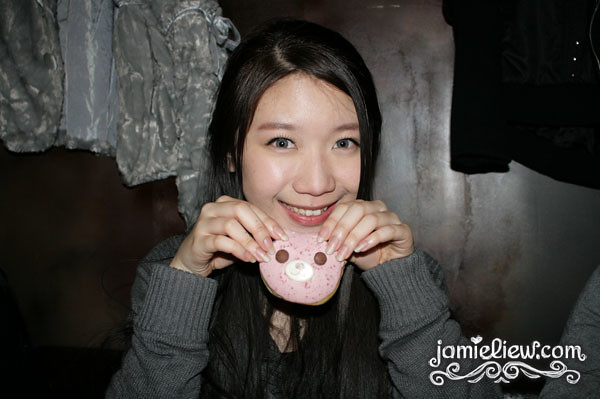 and the teddy bear donut. nyam~♡.

actually, I ate the ears. HAHAHA. this picture is taken in the jail-like cafe. will blog about it soon. 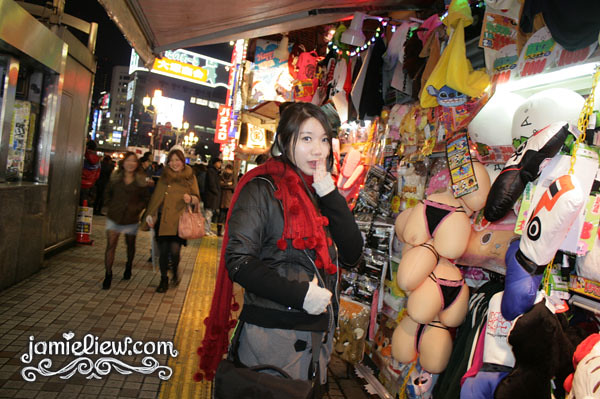 the variety of PILLOWS. want to sleep on somebody’s ass? get one of these. 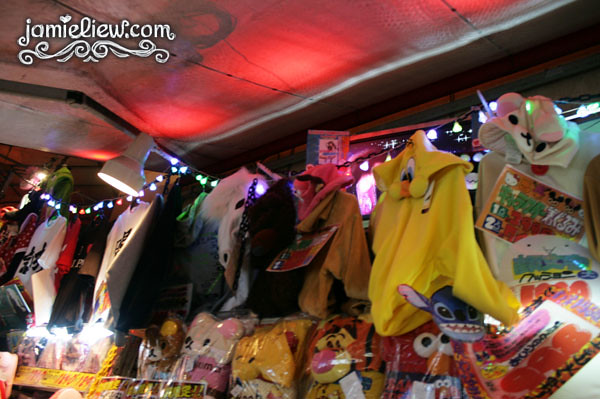 super cute capes! if I wear them here people will give me “the stare”. in Japan? nobody will even look! 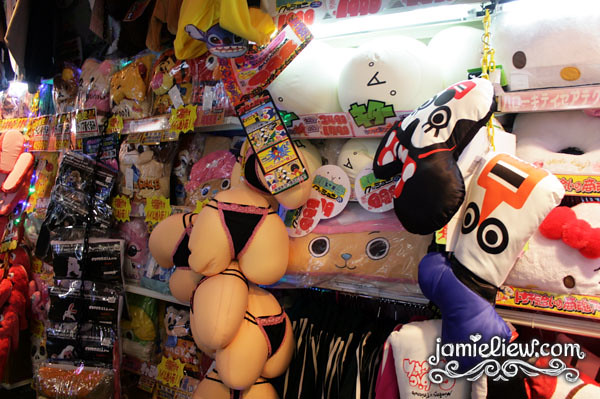 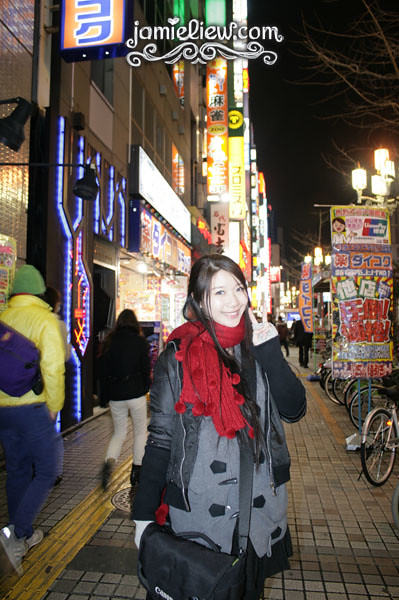 and that stall is placed in a street like this. 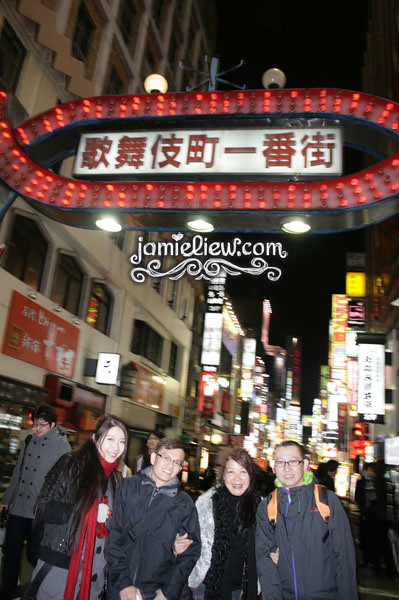 okay now the fun part. have you ever heard of the Kabuki-cho?? before I went to Japan, a friend of mine told me that this is a place I HAVE to visit. he did not tell me why. and later, I found out.. it’s a famous red light district. 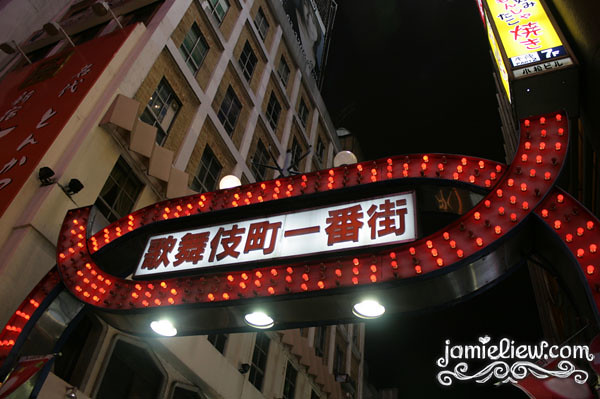 I wouldn’t call it a tourist spot, but I have to say, this is somewhere you must come to “widen up” your eyes. massive culture shock. 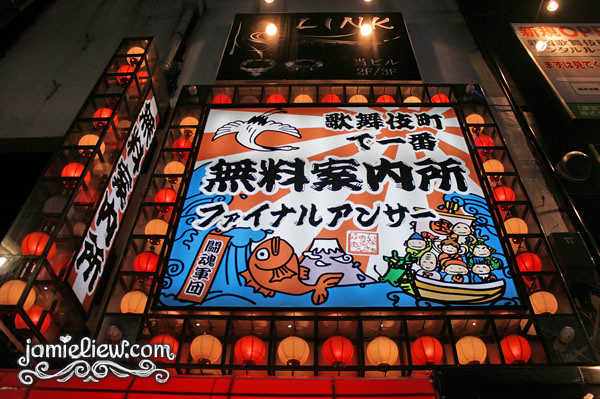 so.. what is? nope not this. I just took a picture of this sign because it is cute HAHHAHA. 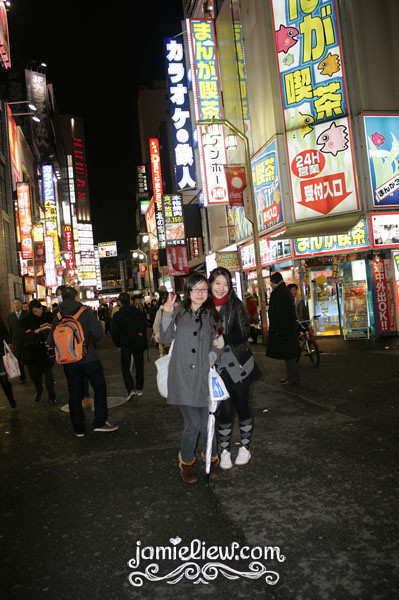 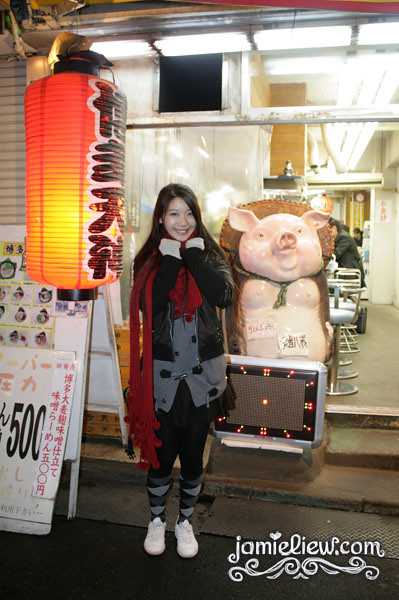 they have quite a number of famous food stalls. and that is a not-very-cute pig in a cape.

so here goes the culture shock. 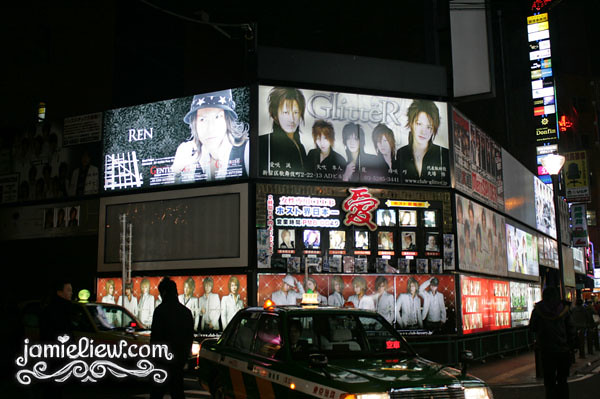 TADA!! ONE WHOLE BUILDING OF POSTERS. what are these? posters for some japanese boy bands? 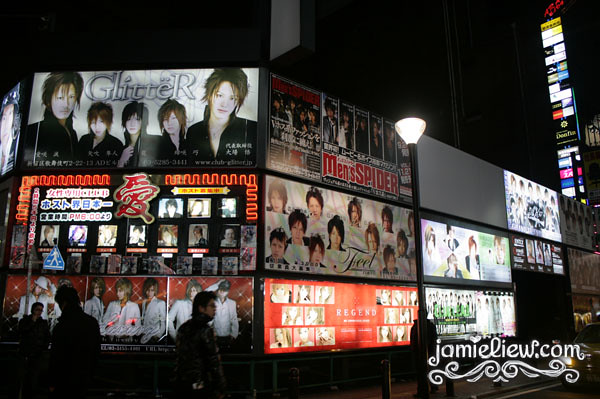 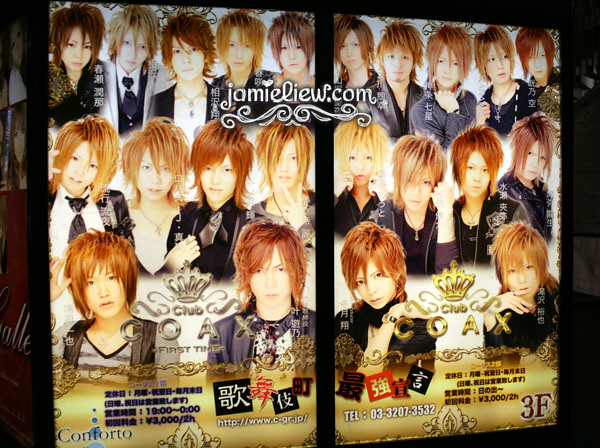 these guys with “fahrenheit hair” (if you watch Mingjai14’s videos hahah) are.. hosts.  they are the male version of call-girls I guess? you pay them to drink with you. if you could see, it said 3,000YEN for 2 hours. HAHAHA.

I bet you noticed that they look.. weird. just weird. well, quite a big number of Japanese guys actually shape their eyebrows. it is TRUE. you can see baldies in their school uniforms with super thick eyebrows shaped into one fine CURVED line. I mean, VERY CURVED LINE. and it is a form of being clean cut. 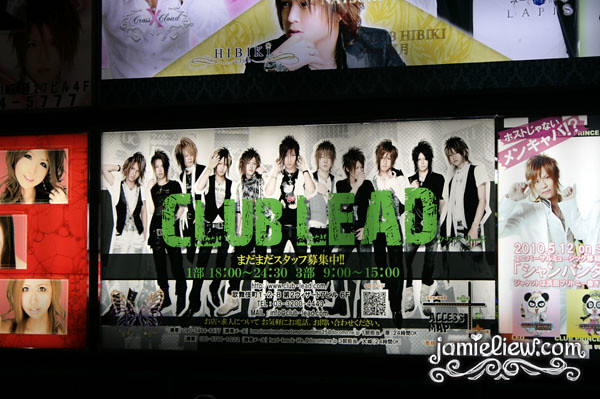 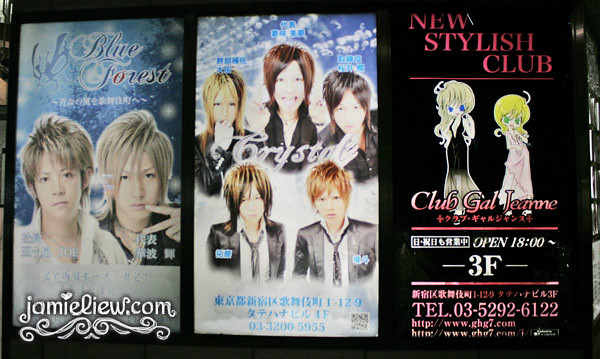 previously I’ve watched some travel show about rich females in Japan who do not want to be tied up in a relationship, they’d spend thousands of dollars just to get these “call guys” to drink with them. it’s like a relationship with no strings for them. HAHAHA. super awesome. 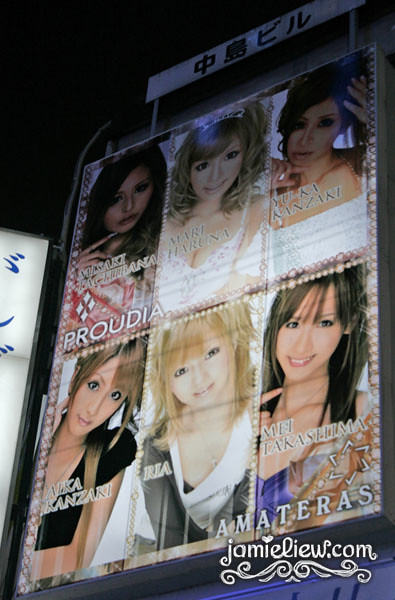 and if there are males, of course there are females. but then it is very funny, I think I saw more male posters compared to female posters. hmm?

but my goodness, prostitution here is so open it’s like a legal business there. I mean, it IS legal. there are cinema’s with posters outside literally showing naked girls T_T. it’s amazing. that is why the rape cases in Japan are super low. (don’t think I should post any pictures here later I get barred from blogging from the Malaysian gov D=) 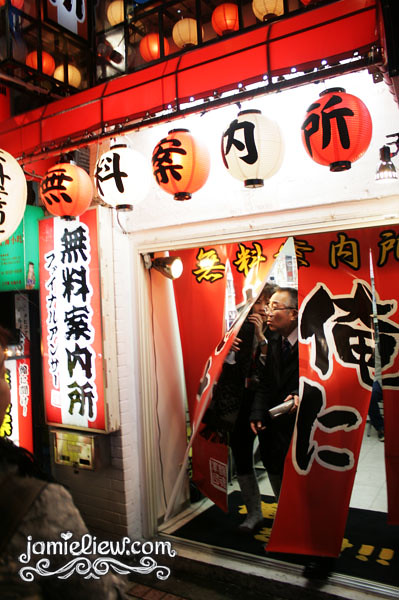 I dunno what shops are these. even middle aged couples goes in there. 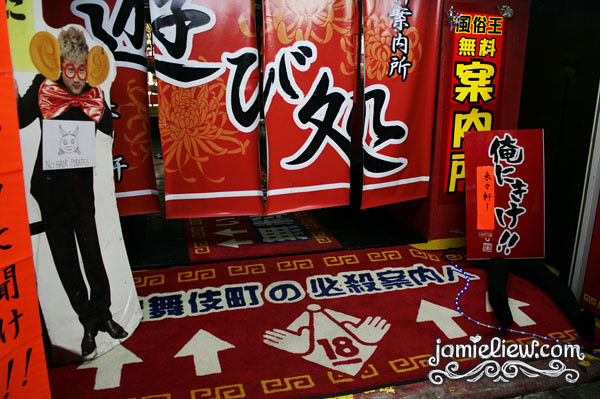 and below it is said only people aged 18 and above could enter. really, WHAT ARE THESE? D=. 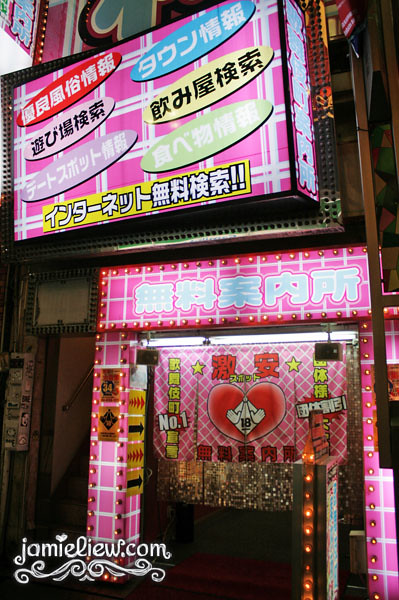 for some reasons, I am thinking they are love motels pfft. hmm. like, a fully equipped love motel. *faints*. 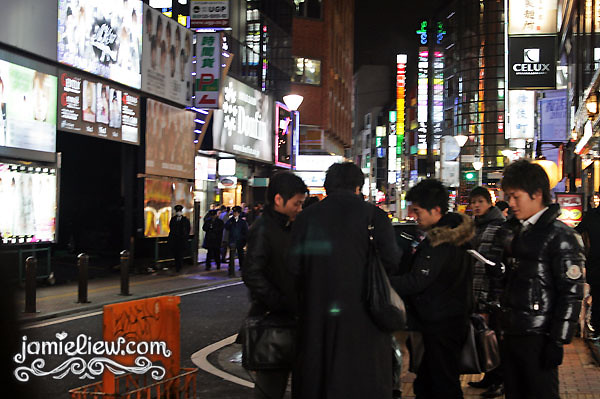 oh right, just so you know, the well groomed quite not bad looking guys with BLACK SUITCASES wearing black suits as well are usually ducks. most of them have madly bleached hair. styled. I dare not go near them to take pictures. T_T. they’d approach you if you’re alone or when your group have no men. 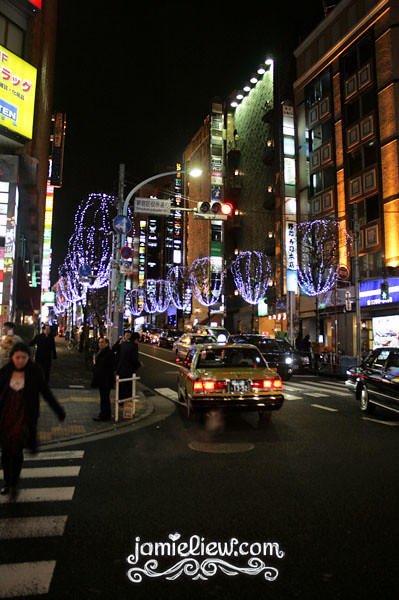 though it might sound a little dodgy but it isn’t! really! so if you’re planning to go to Shinjuku, do drop by here! just make sure you don’t go there drunk. ;).

First of all Jamie, they are not DUCKs or GIGOLO D= This is an insult to them as they have their own term called Hosts. Hosts pubs are mad competitive due to many prostitutes or hostess who are stressed out and have no one to confide into, as most of their ‘friends’ are customers.

Fahrenheit hair? This hairstyle from the fashion Gyaru-O which came from Japan :3 It’s very common for young teens to love this hairstyle as well. Also, they do not often wear black suits, but they do wear suits of different colour like silver, red, blue, white but black is not as often. Black hair and black suits are usually trainee’s who just started :3

And it’s fine to approach them and ask for pictures IF you can reject them later and walk off 🙂 They are usually very polite.

p/s: Very jealous of you. Wish i could visit them hosts once 🙁

First of all Jamie, they are not DUCKs or GIGOLOs D= This is an insult to them as they have their own term called Hosts. Hosts are mad competitive due to the fact that many of their customers (prostitutes and hostesses) tend to have no one to confide in when they are stressed out.

And that ‘Fahrenheit hair’ is actually a hairstyle from the Gyaru-O fashion, which came from Japan :3 Curved eye brows? Metrosexual look is all the rage in Japan to the point it’s become normal.

And usually most Hosts tend not to wear black suits and have black hair. They love suits, but are usually in different colours like red, silver, blue, white and so on. As for bleached hair, they love it :p Black suits with black hair individuals are sometimes the trainee’s as they’ve just started :3

It’s fine to approach them for pictures as they’re generally very nice, but ONLY IF you can reject to enter later on. Worst comes to worst, just thank, apologize and walk off.

p/s: Very jelly of you D= Wish i could’ve went to Shinjuku to meet them hosts *w*

LOL PRESLEY CHILLL! you Japan addict *wipes sweat*. I hung out with people from Malaysia and we were all speaking in cantonese and I was told this is the “ap kai/duck street” HAHAH. edited. CHILLLL.

MOST of them wear black suits. out of 10 perhaps only 1 will not wear black suit. hmm. omg no wonder lah you have a Gyaru-O hair. HAHA. and isn’t Gyaru = Girly? D=. dunno. LOL. I’m just imitating Mingjai14 wth he calls it the “fahrenheit” hair HAHAHAHAHA. it’s so funny u have to watch his videos.

I DUWAN LOR. later they molest my hand how. HEHEHE. omg you wanna visit the hosts instead of the hostesss??? the documentary I watched it’s those rich (and pretty fml) businesswomen go visit wan. damn pro. it’s like female entertainment. absolutely cool.

Oh damn, sorry Jamie, i didn’t know it took a while to post properly so i rewrote it cause i thought didn’t appear. >_> Sorry if i sound…psycho?

Most of em in black suits? That’s odd…Unless the one i am told only applies to one pub. There is one pub, damn famous. Some of the most famous hosts are there, such as Issei, the no.1 selling host in Minami, who is now the owner of Rakkyo. The most internationally known, Ryoma also works there, but i’m not sure if he still does.

Gyaru is girly, that’s why they look feminine. They are not gigolo’s who just screw, but rather, they sell dreams, so to speak. They cater, entertain their clients, and usually sex, stops their customers from coming (as usually this is the goal of some girls). And besides, i like what they do, it’s not easy, but it’s….interesting.

Hey Jamie, great post. I just spent a week in Shinjuku recently. I love your perspective on the area. Next time, you should go to Robot Restaurant. I will post on that soon! <3 Jody

Hey again Jamie, I’ve posted on my blog about Robot Restaurant in Kubukicho. You can check it out here, on my blog: http://jodymonkey.wordpress.com/2014/02/05/japan-new-year-trip-2013-2014-3-robot-restaurant-entertaining-mayhem/