Konbanwa! long time no see blog. I had been working U_U. but NOW when my coll started, I am more free. why? because there’s only twoooo classes per week! and hopefully the time table wouldn’t change, so both the subjects fall on the same day = one coll day per week! YIPEE! 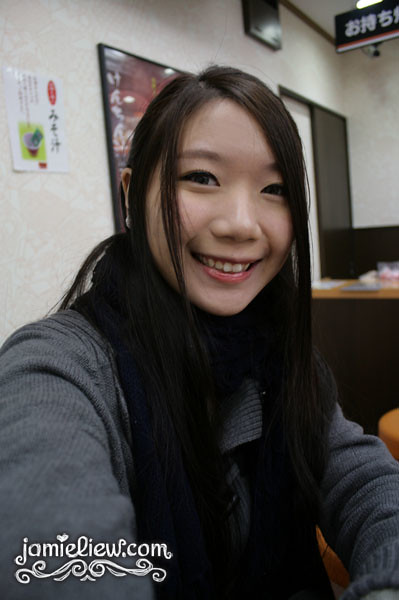 it was so HOT when we arrived in Tokyo. it’s always like that, whenever we land we wear thick clothes and when we get out, it’s so hot we’re literally sweating in winter. SO, the next day, I wore my mom’s thin sweater. but then it rained and I was almost froze to death. thank goodness we brought extra clothes. 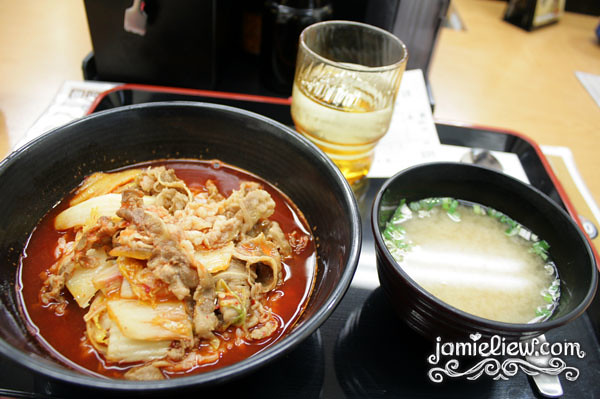 oh right, opposite our hotel, there’s YOSHINOYA! they used to have it in Malaysia, but it closed down. =(. here, they charged about RM8 per bowl and everybody complained that it’s expensive and unfilling yada yada yada.

and guess what? THIS BOWL OF RICE, IS THE CHEAPEST MEAL YOU CAN FIND IN JAPAN. and it is so DELICIOUS. 280yen (around RM10) without the soup. 50yen extra with the soup =D. so well, if you’re on a budget, you can absolutely survive with eating beef bowl everyday. 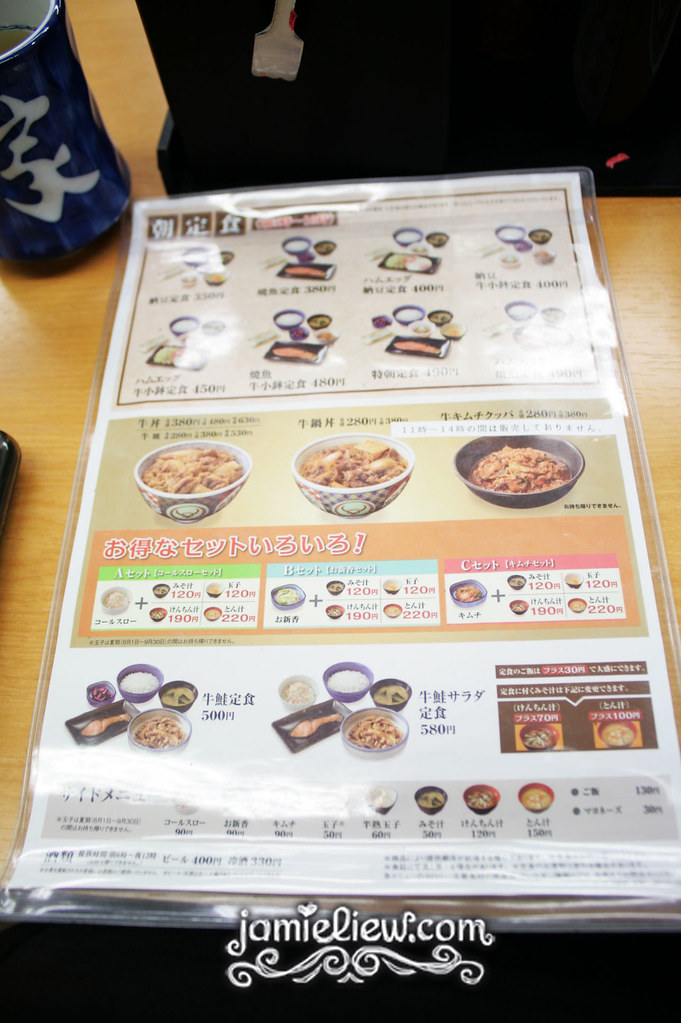 here’s the prices for what you can get in Yoshinoya. by the way, this is Japan’s fast food. looks absolutely healthy to me! 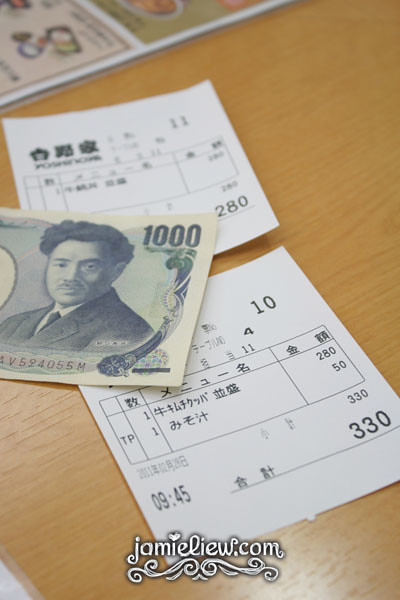 meal for two and below 1000yen is only available on fast food restaurants. =P.

back to my topic. MEIJI JINGUMAE!

you can get off either at Meiji Jingumae-Eki or Harajuku-Eki ( JR Line). Eki means Station. these two stations are right next to each other. 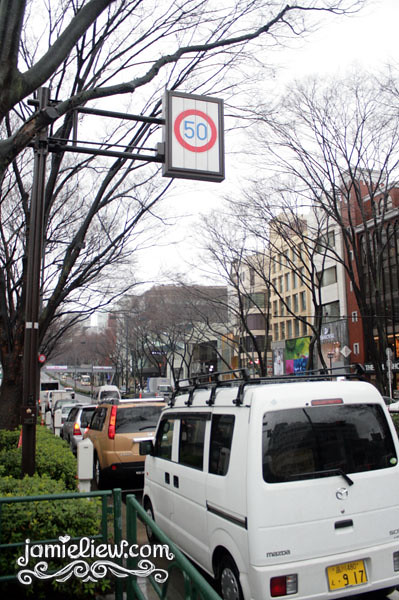 this is Harajuku. upon exiting to the Meiji Shrine exit, you’d see this street.

but you’d be wondering, WHERE’S THE SHRINE?!

well, BEHIND. turn around and walk. one or two minutes later, you’d see this. (if you are taking the JR Line, just walk straight.) 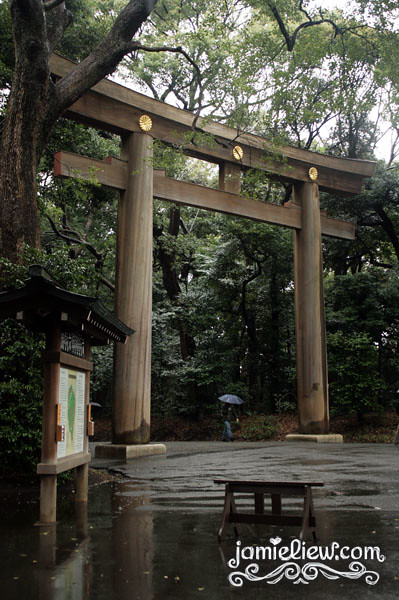 this would be on the right when you see it. I took this picture under the shade because it was raining, and this angle looks much better. 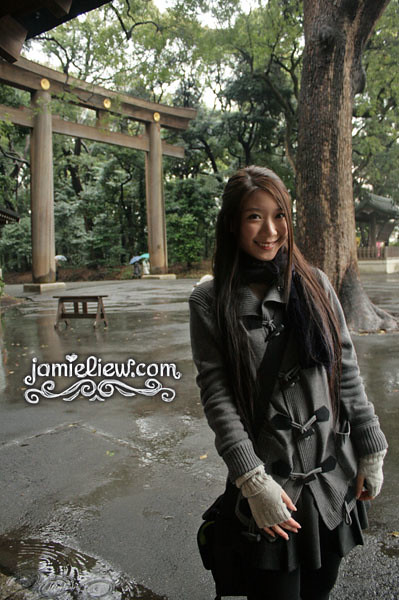 it’s not like a holiday in Japan without taking a picture in front of the entrance of famous shrines. 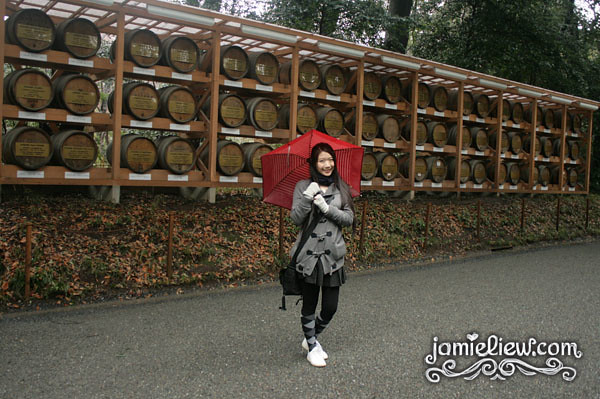 after the entrance, you might find it weird because it feels like you’re going into a park for a jog. it’s pretty far. but after a while you’d see these wine barrels on your left.

weird attire, I know. well, I was supposed to wear black sport shoes. told my mom to pack the addidas. but the white one is an addidas too. =X. so.. haha. 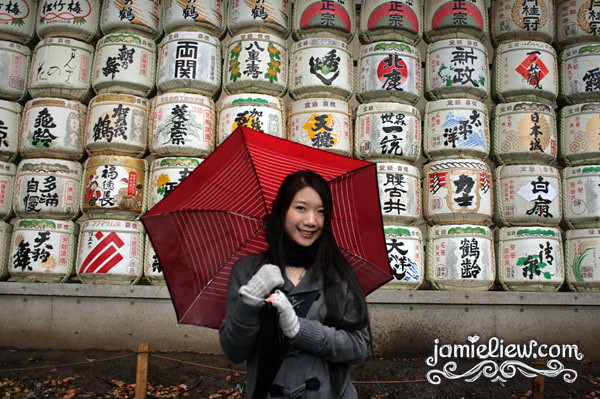 and these JAPANESE barrels of wines on the right. 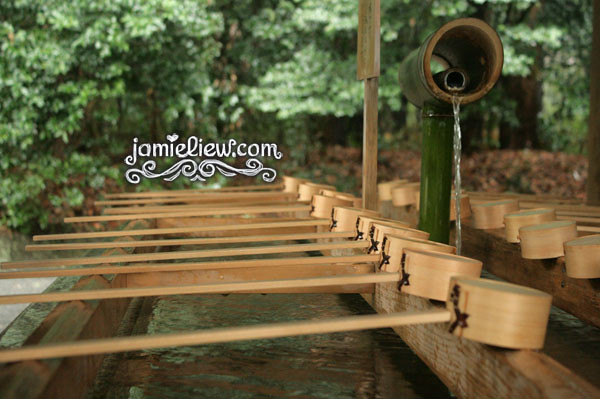 something I had been wanting to try for the LONGEST TIME. 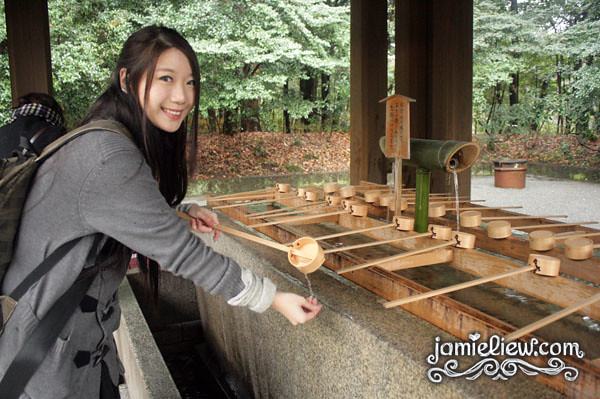 my hands were already frozen. and it became more frozen. everybody washes their hands here. I just had to follow. you can drink the water too. it tastes like… mineral water. HAHAHA. 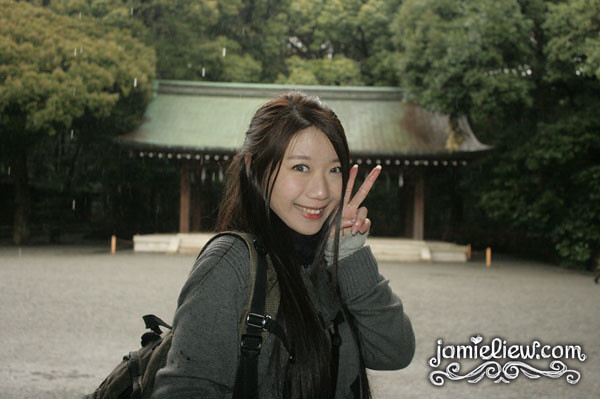 the rain looked a little like scattered slurpee falling off the sky and melts immediately when it touches something. it wasn’t snow. but it wasn’t exactly rain either. haha.

one thing about having flash on is that my eyes expands when the flash reaches my eyes making me look horrifying pfft. 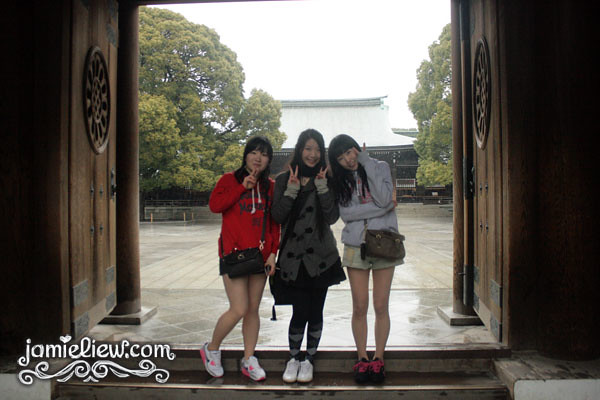 I repeat, I was FREEZING TO DEATH. these two Korean girls were wearing shorts! I just had to had a picture with them. very nice girls xD. 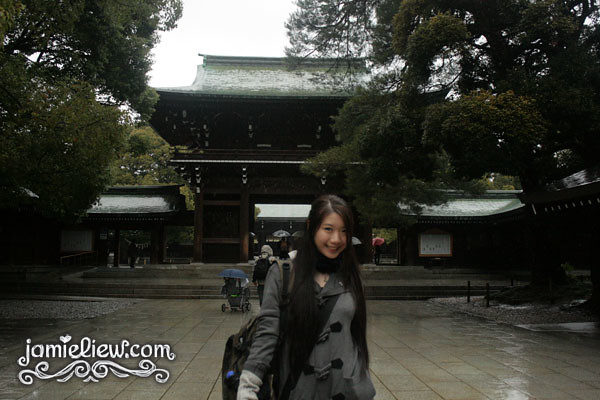 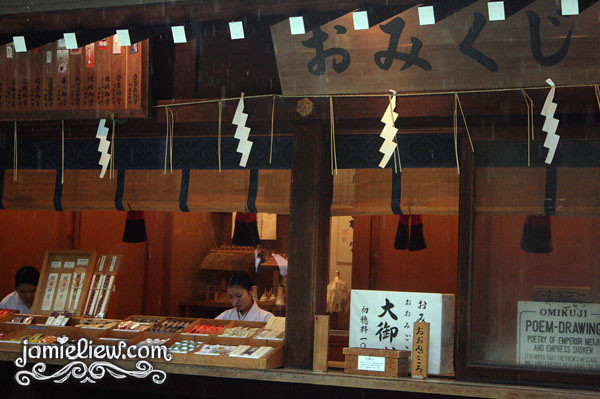 the souvenir shops selling all sort of charms. it’s very expensive. like 500yen for one U_U. 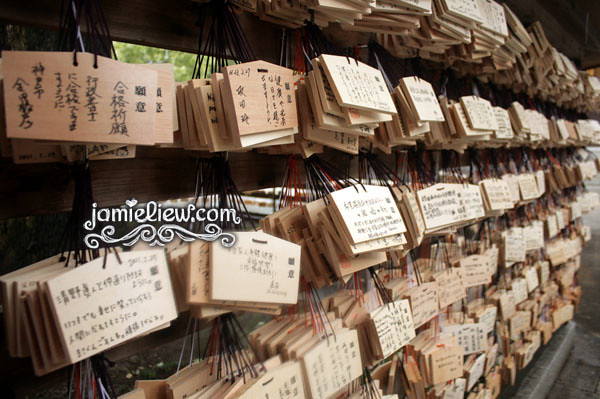 write your wishes and hang it here! I wonder if the Japanese gods can read all types of languages. but there should be no problem since there’s google translate. =D! or perhaps you google translate what you wanna say, print it out and try writing it in Japanese =D. 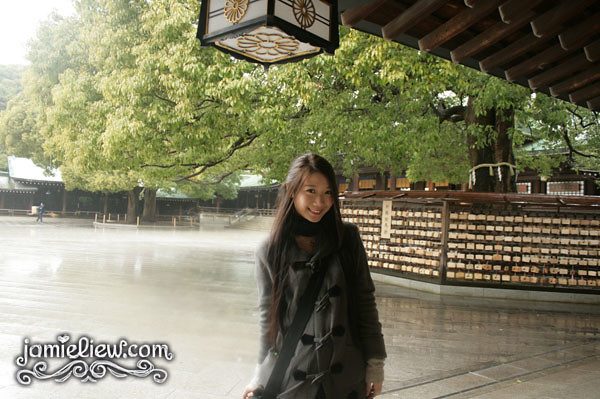 it’s forbidden to take pictures INSIDE the shrine but it’s like this.. you throw a coin into those huge boxes with parallel holes and make a wish. it’s pretty awesome. but overall, this shrine is awesome. if you were to stop by at Harajuku, come here. =D.

the S.O.X. All-Stars Drum and Dance is back! last year, the grand finale @ the National Stadium attracted more then 8400 audiences! 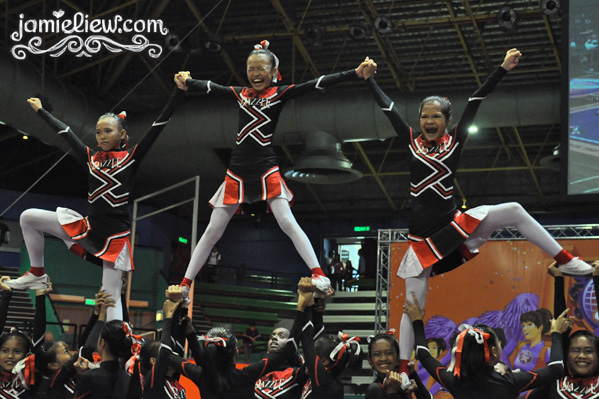 a picture from the S.O.X. All-Stars Drum and Dance competition I attended last year.

this year, the S.O.X. All-Stars Drum and Dance 2011 is going URBAN! along with Ean, Zher, Wakaka Crew and more, this year’s competition will definitely be a BLAST.

so do you think you have what it takes to be the champion this year? well, registrations are now OPEN! you can register ONLINE at www.xpax.com.my/sox!

if you hadn’t seen the awesome performances from last year’s competition, there’s no worries, because I have some links here for you to check out last year’s performances and also to show you why you should come for the one this year! =D. even I myself had my eyes stuck on the screen.

SO, if you’re ready to show the world what you’ve got, register NOW at the S.O.X. website of log on to find out more or to catch up on all the action!

I simply adore this web-site! The content is priceless. Thanks for all the articles and making my week. Compliments, I’ve