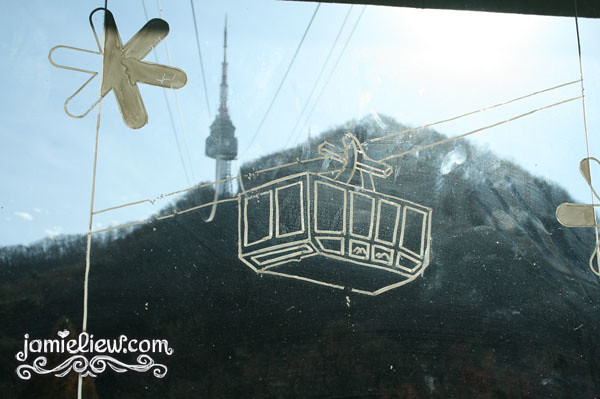 these liquid paper drawings are drawn on most glass in Seoul and it looks absolutely fabulous. except for I doubt it is actually even liquid paper. 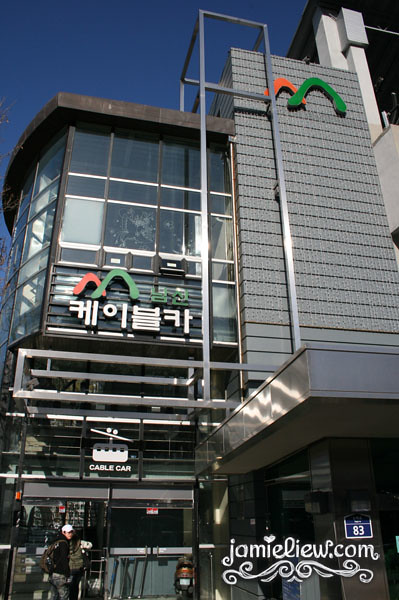 to go to Namsan Tower, you’d probably only have two ways. to get there by cable car or directly go up there by car. but, you can always put hiking as your third choice. kekeke.

to get to Namsan Cable Car 남산 케이블카 (about 7000won for a return) you’d have to get out of Myeong Dong station exit 3 and walk towards the path to Pacific Hotel. there is two paths. pick the one on the right and walk straight, turn right and you’ll see it. we didn’t know it was so near and took the taxi. PFFT. wasted 15bux. we found the way from walking down haha. 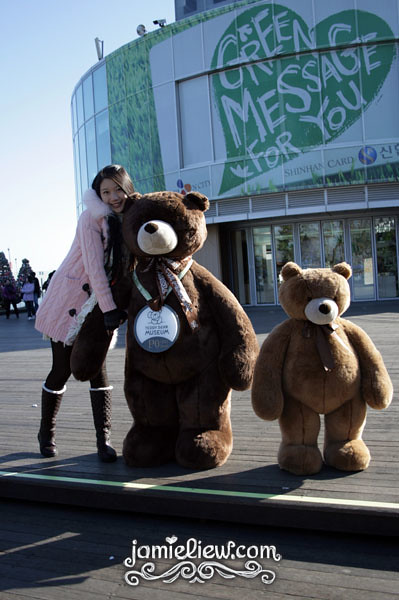 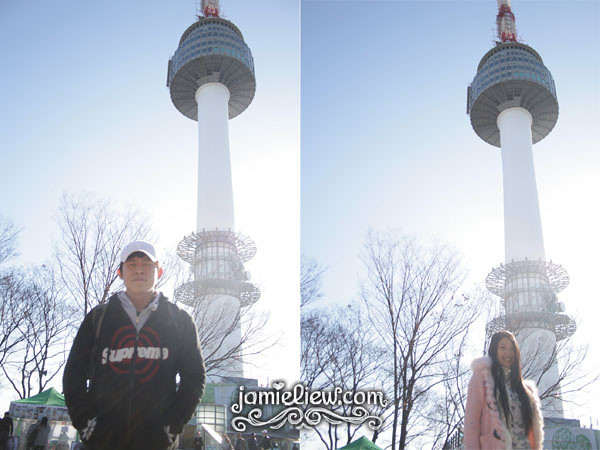 and also the tower. it’s not exactly a good idea to visit in the morning. the sun would be directly behind. and look at the difference between the pro and the beginner. =P. I stood at the same spot he did. T_T. 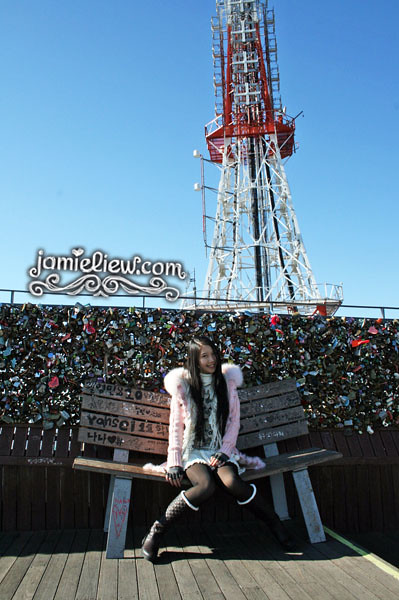 a single girl conquers the couple bench. well you see, the bench is slanted to the middle, making couples err, fall to each other?  sitting closer. this is the best bench to sit on if you wanna get closer to a girl hehe.

and those behind me? those are locks. thousands and thousands of locks. and the consistency of the number of locks is mad. there was like, 50meters of fence filled with locks. 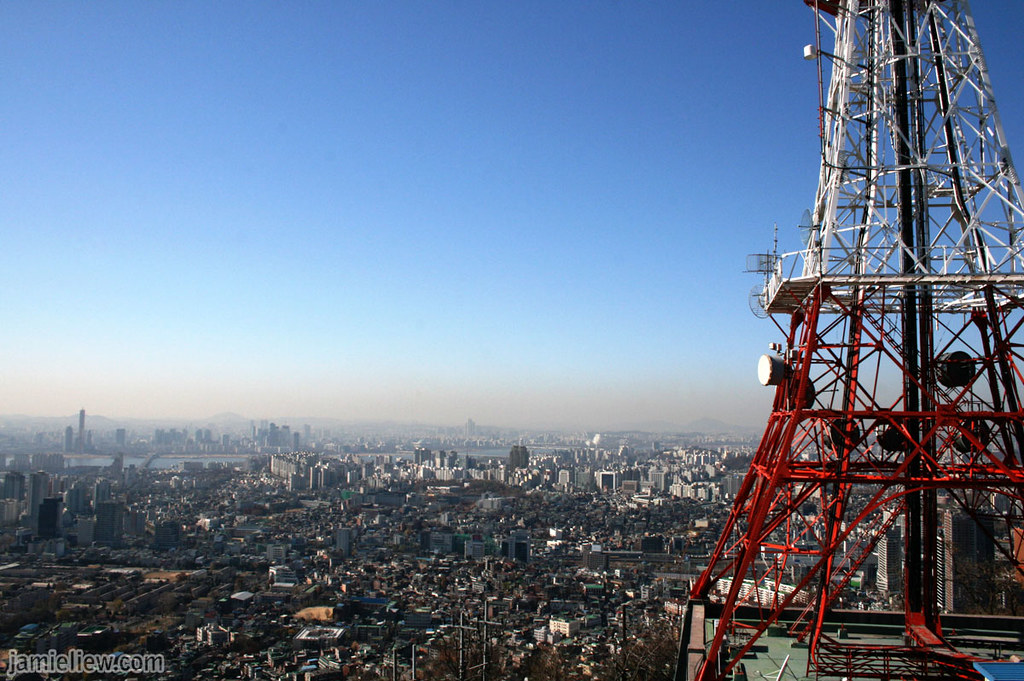 click on the picture to view it’s full size.

this is my view from the bench. haha. very pretty, no? this was my phone’s wallpaper for a month! 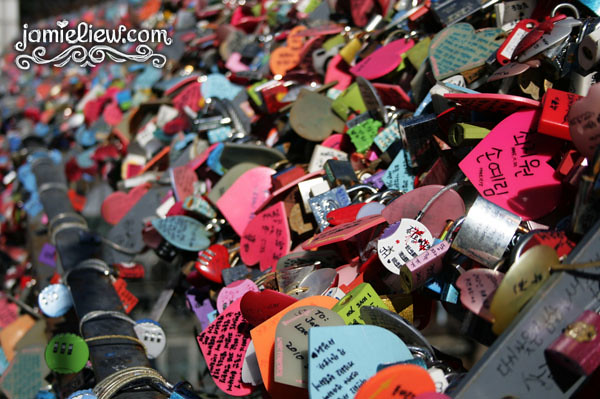 I think EVERY young couple in Korea would have a pair of lock here. it is said that if you lock your locks together here your love will last forever.

honestly, I want one here too when I have a boyfriend. 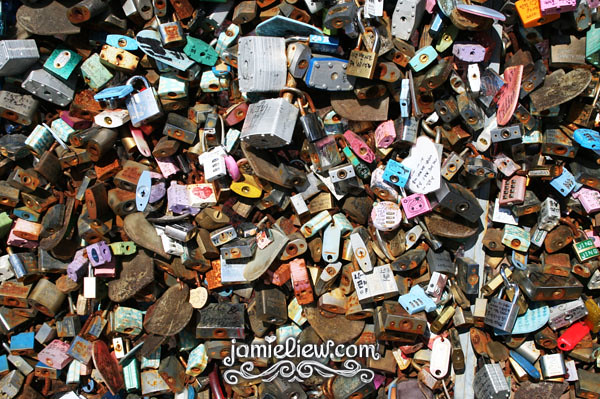 and this is how the locks will look like after a few years. you’d not recognize which is yours. hahaha. 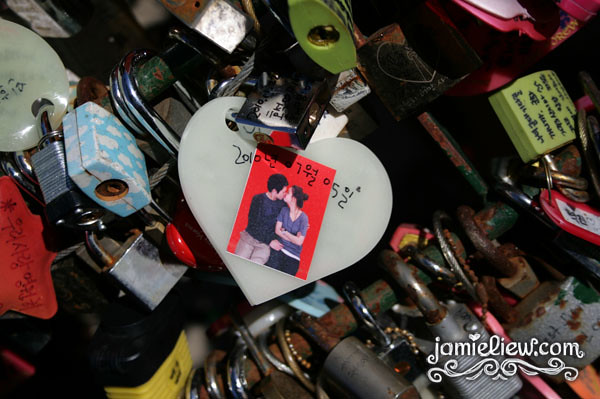 and there are plenty of creative locks. =D.

I thought that the pose was a little awkward. hahahaha. 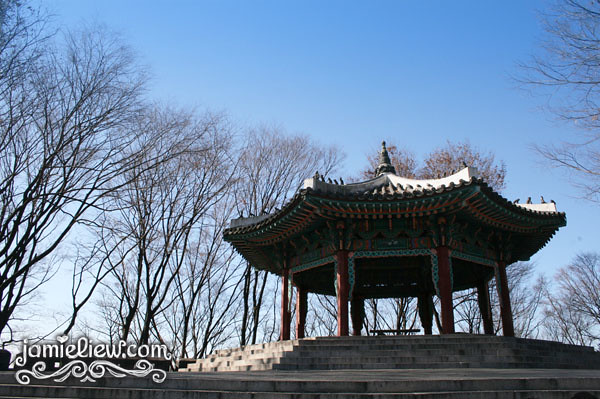 the famous korean… gazebo? you’d see this in MANY MANY MANY dramas. it’s so popular. and when I was there, there was a funny uncle doing weird exercises on the benches inside. as in, him laying on the bench, moving his legs up and down @_@. not a common thing to be seen here. 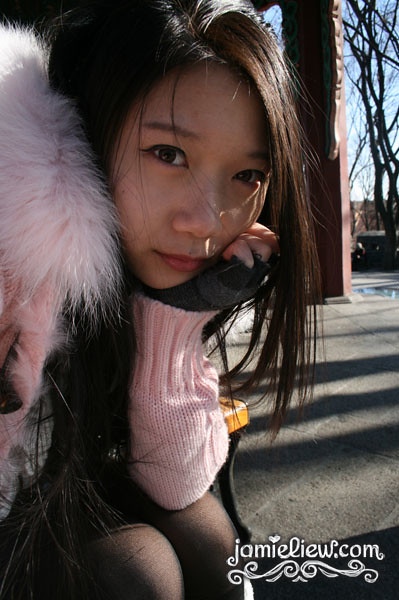 and next, the Teddy Museum 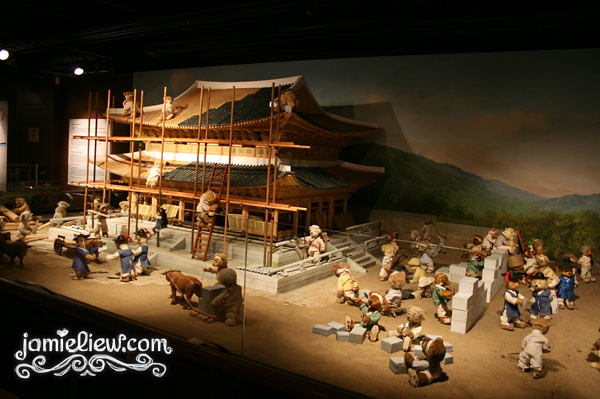 the Teddy Bear Museum is pretty nice, great effort. but the entrance fare is a litttttttttttle expensive. 8000won for adults. that’s about RM24. cheaper if you’re a teen (teen means 19 ‘Korean’ years and below. 18 year olds are 19 in Korea.) 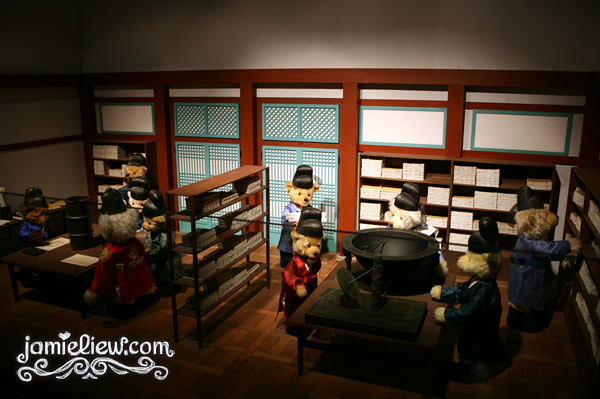 but what I liked about it is that it’s actually explaining Korea’s history and how it bloomed until today. there were even those famous streets and all with modern teddy’s on it! 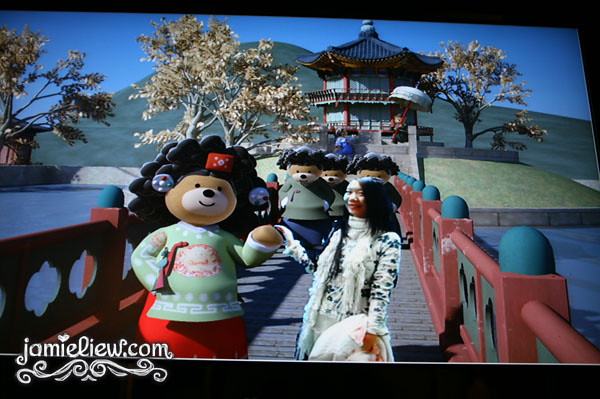 and there are quite a few of these cute stuff. ahhahaha. 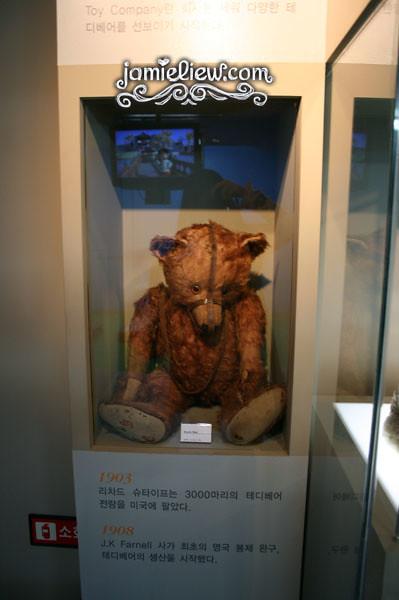 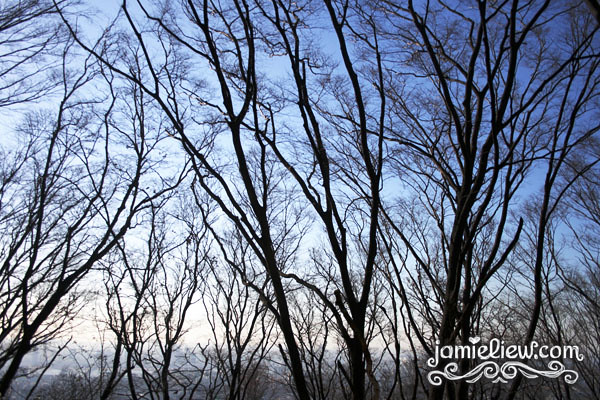 visit on late autumn, you’d get these. I absolutely love the weather when I was there. =D. though it rained on the first day I was there. but that was when I was already in bed. 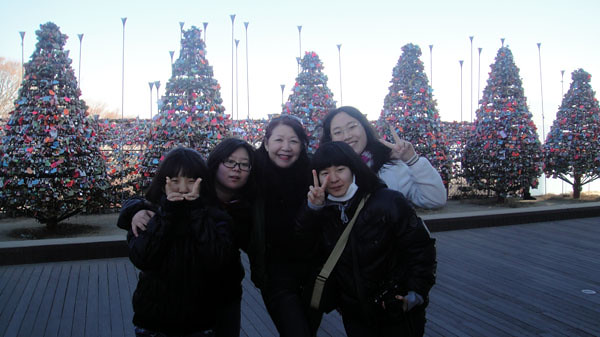 my mom with a bunch of korean teens! taken by her Sony Camera.

the top deck filled with locks has the LOWER deck now. and with trees! I really wonder how they hung the locks on the TOP of the trees. 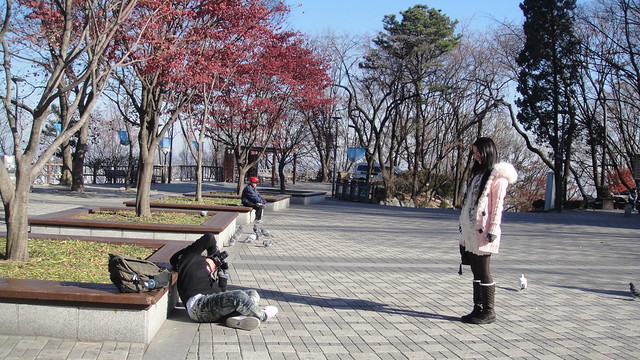 and my mom found this amusing. =O. 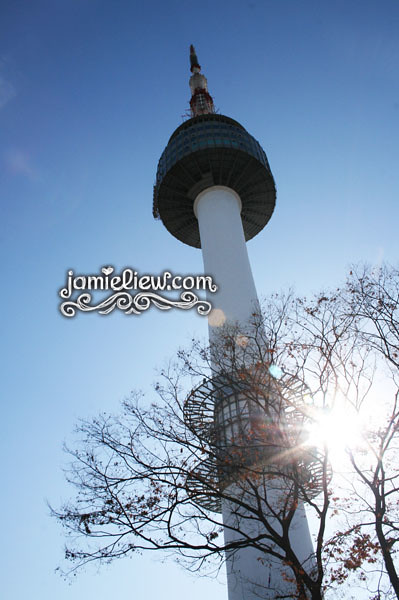 for N Seoul Tower, I’ll mark it as a.. MUST VISIT!

It must be really cold at that time. But I love the blue skies. Beautiful.

Hi, I chanced upon your blog while googling on Korea. Did you go to Lotteworld while you’re there, and do you know which is better? I’m going to Seoul for a holiday too but I can’t decide which to go for, since I only have 4 days there! Thanks for helping! And your blog is really interesting 🙂

my friends living in Korea told me, Lotte world is pretty much meant for kids. if I had more time maybe I’d go there. but if you have limited time, I really think that you should visit Everland. Aiks, I hadn’t have time to post more posts on Korea yet. but for the other three days, I guess you’d know where you would wanna go =). but if you’re willing to travel a bit further, Nami Island is beautiful.

Hi Jamie. I had read through all your blog posts on Korea for few times and they makes me more and more excited for my Korea trip. U mentioned that to take the cable car to Namsan Tower, I need to get out of MyeongDong Station exit 3, but I saw visitseoul.net wrote as Chungmuro Station Exit 2. So, which station should I go to~?
Thanks for helping!!!

Hi Jamie. Thankyou for showing all these infos. You are amazing! By the way do we need to pay to see the love locks? I saw some blog saying we need to pay 9000 won for the love locks. Do they sell locks there? Possible if i buy one there so that i don’t need to bring one.

owh thankyou for the info! btw, do you know where is palgakjong? is it the same place as N seoul tower?

Hi Jamie! I really love your blog very much! It is so informative for me as I was doing some “homework” before going to Korea next month. Keep it up! 😉